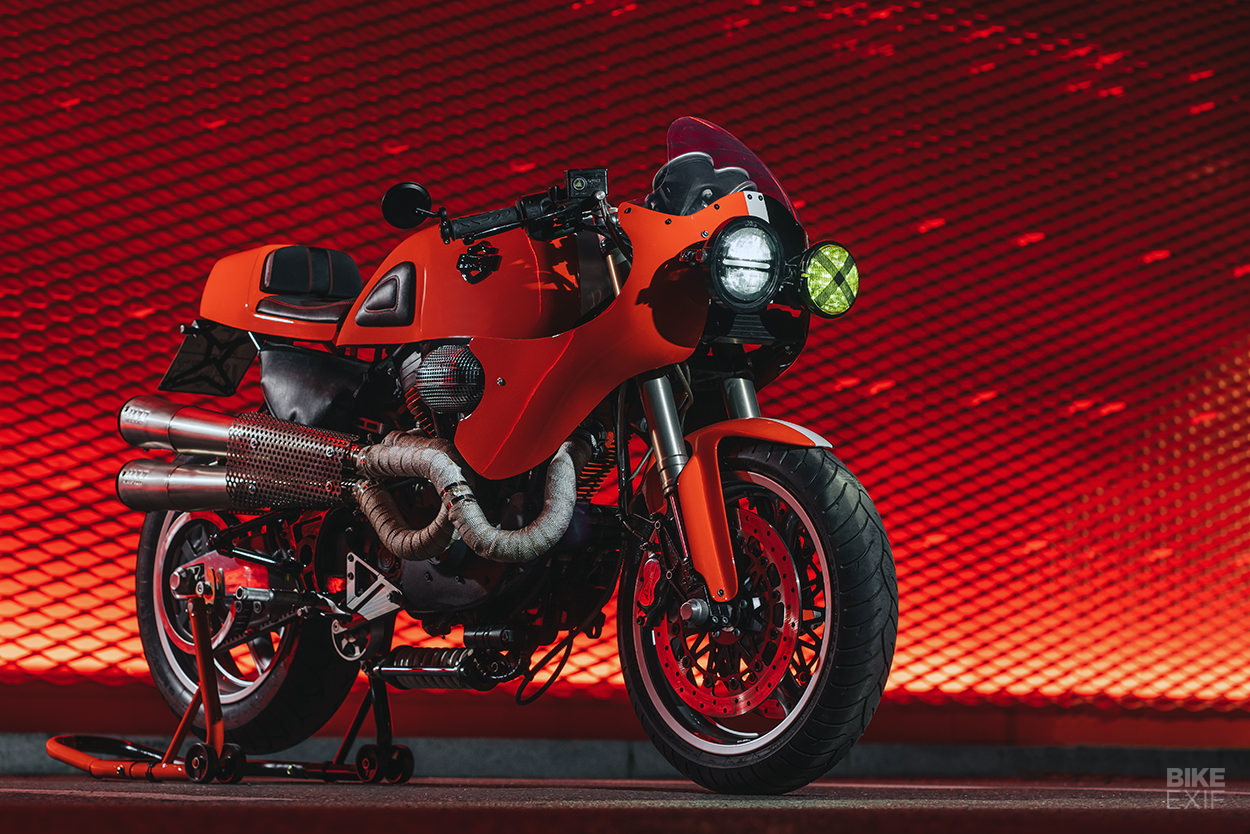 If there’s a bike that symbolizes the uneasy relationship between Harley-Davidson and sporting performance, it’s the VR1000. Developed in the late 80s to compete in the AMA Superbike series, it finally appeared on track in the mid 90s.

By that time it was down on power compared to the competition, and despite excellent handling, never achieved the wins that Milwaukee hoped for. Still, the VR1000 was an excellent machine in some respects, and it has many fans today, over 20 years after the race program was canned. 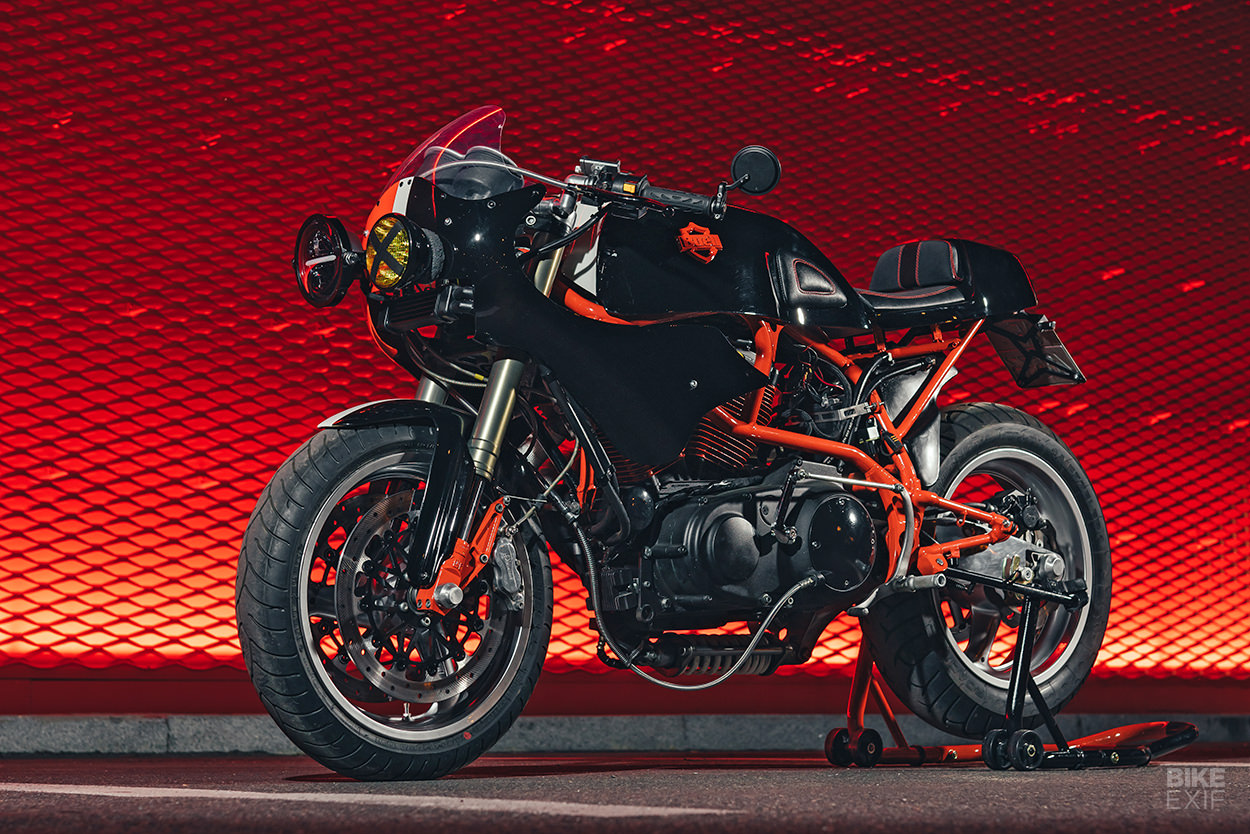 One of those fans is the Italian customizer Giacomo Galbiati—who builds under the name GDesign. He’s been working on bikes and engines since he was 13 years old, and has never stopped since.

‘Double Face’ is his brilliant homage to the VR1000, using a reworked Buell S1 that was registered in 1999—making it one of the final S1s to leave the Michigan factory.

Giacomo’s builds focus on details, design and aesthetic: his attention goes first to shapes and colors, he tells us, and then he works on performance. He also describes himself as being ‘mad about history and motorcycles’ and fueled by a desire to build something out of the ordinary.

“I’ve always liked Harleys,” he explains, “but seeing them in the same custom context all the time made me give up on them—despite their engines, torque and unmistakable sound.” 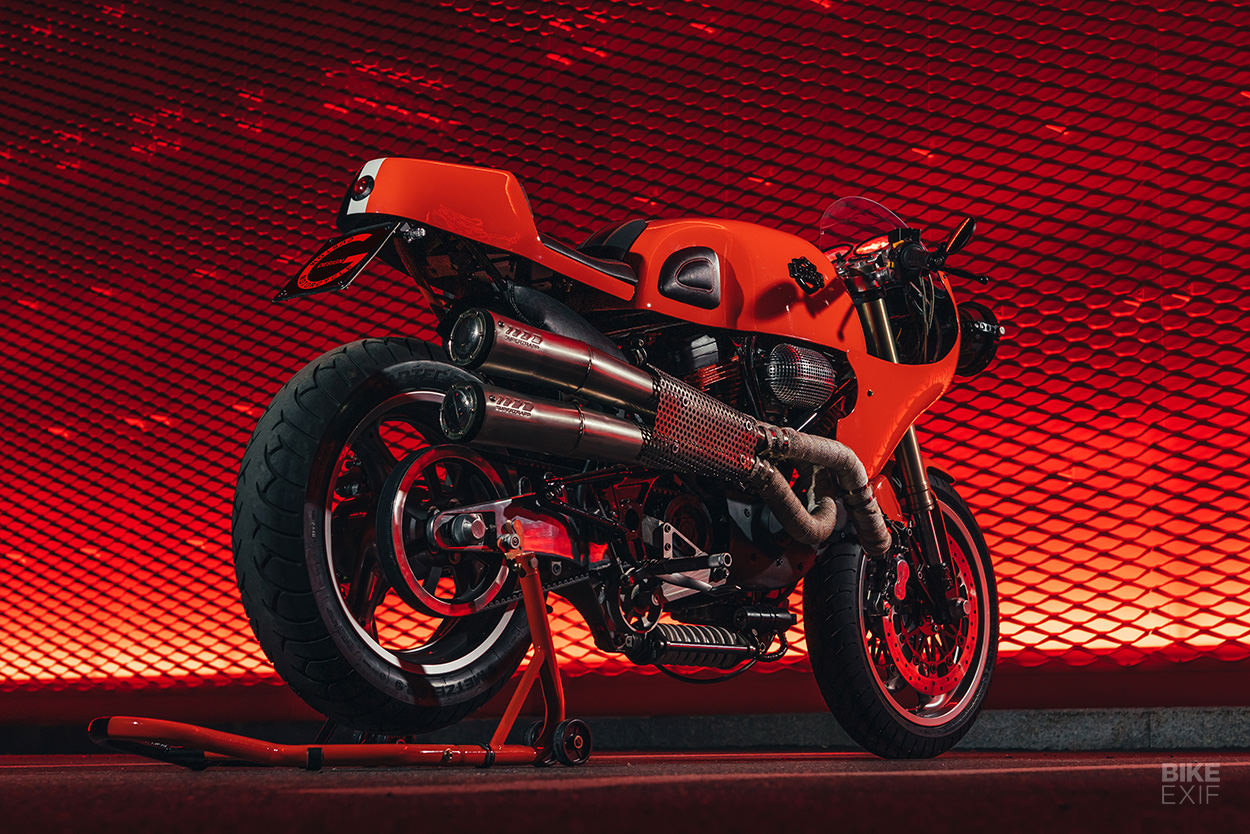 But then Giacomo saw a VR1000 superbike—one of just 50 that exist today. It was love at first sight and he was inspired to create something new. “I already had the idea to build a custom on a Buell S1 base, but seeing the VR1000 in its most iconic color made me understand what I really wanted to do,” he says.

For Giacomo, a Harley engine represents a pure riding experience, able to transmit ‘the sensations of a real motorcycle’ without electronics. And the Buell S1, with its tubular frame, is a much better performing bike than a typical 90s Harley. 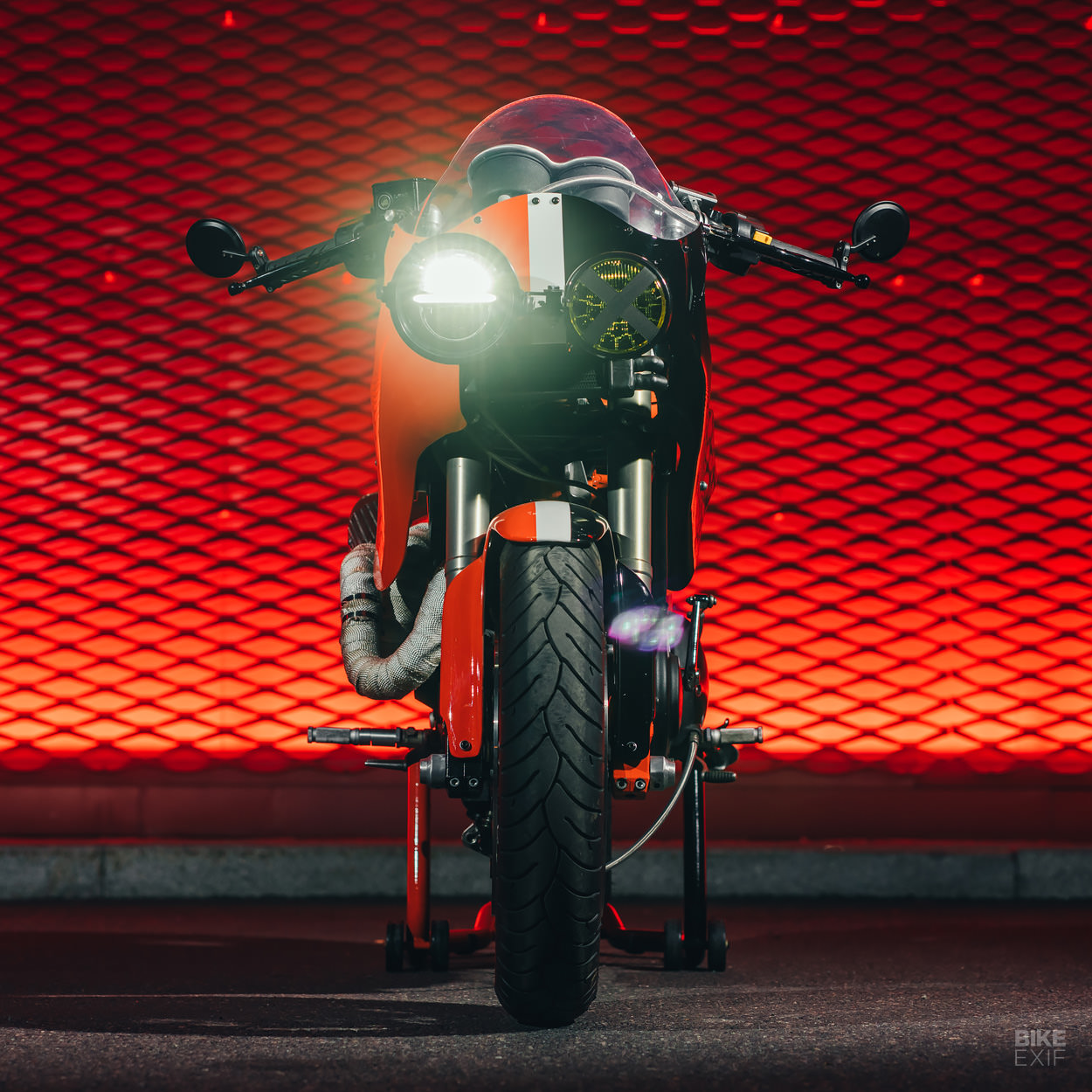 It’s also blessed with ample power—just under 90 horses—from its air-cooled 1,203cc V-Twin. And like most pushrod motors of that ilk, it’s got substantial torque. With 78 ft.lbs on tap, it almost renders the five-speed gearbox redundant.

With the donor bike in his Milan workshop, Giacomo set about building a classic Harley café racer—except each side looks different. Everything is painted black on one side and Harley’s traditional racing orange on the other. That’s from the engine to the frame, right down to the brake calipers and the paddock stand. 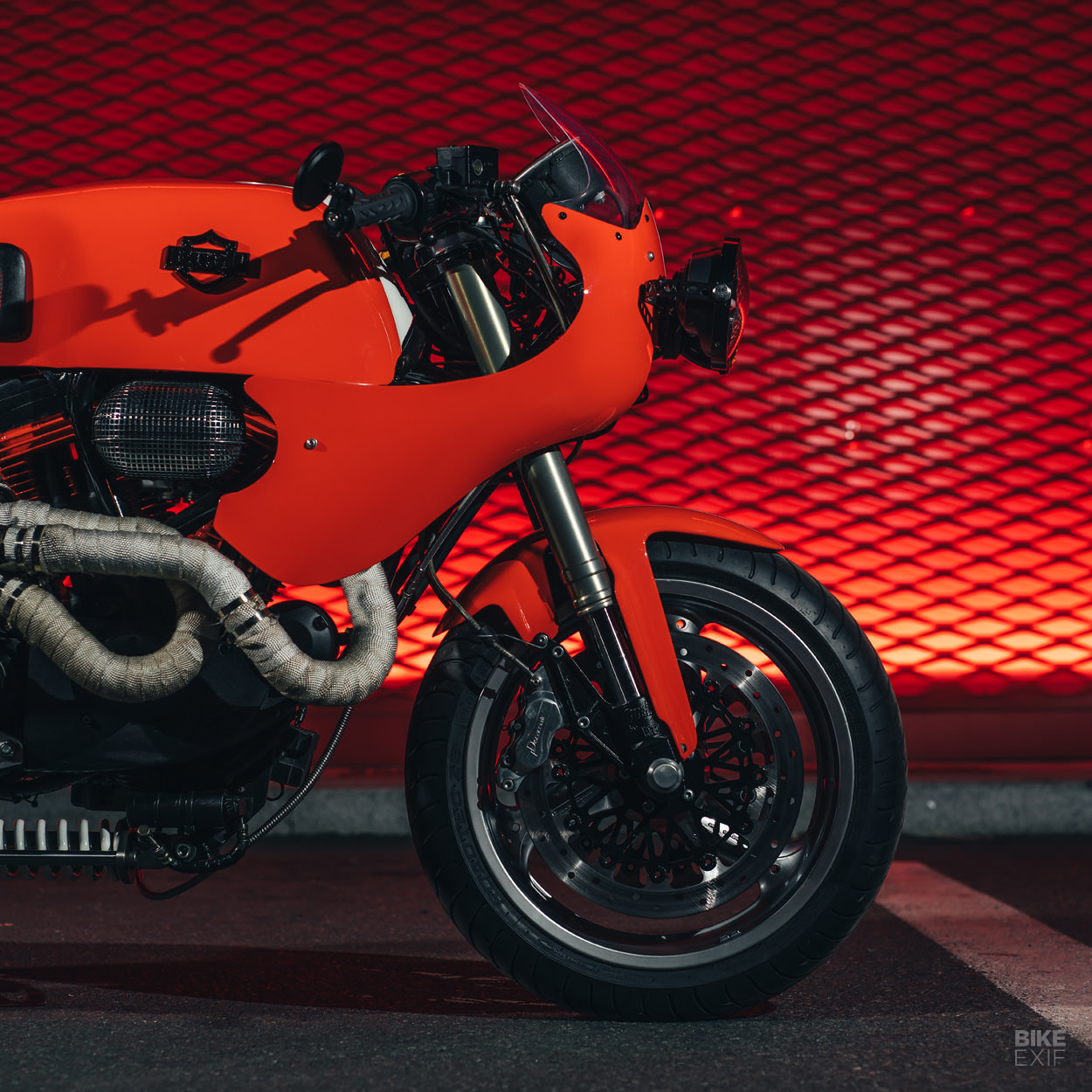 The fairing was recovered from a demolished Benelli 500 and adapted for the project, with a small cut-out on the lower front to keep it in harmony with the lines of the S1. The dashboard has been repositioned to suit.

“The double headlights are a reminder of night endurance races,” says Giacomo. “All the lights on the bike are now LEDs, with the exception of the yellow high beam, and repositioning the oil cooler under the fairing improves engine temperatures.” 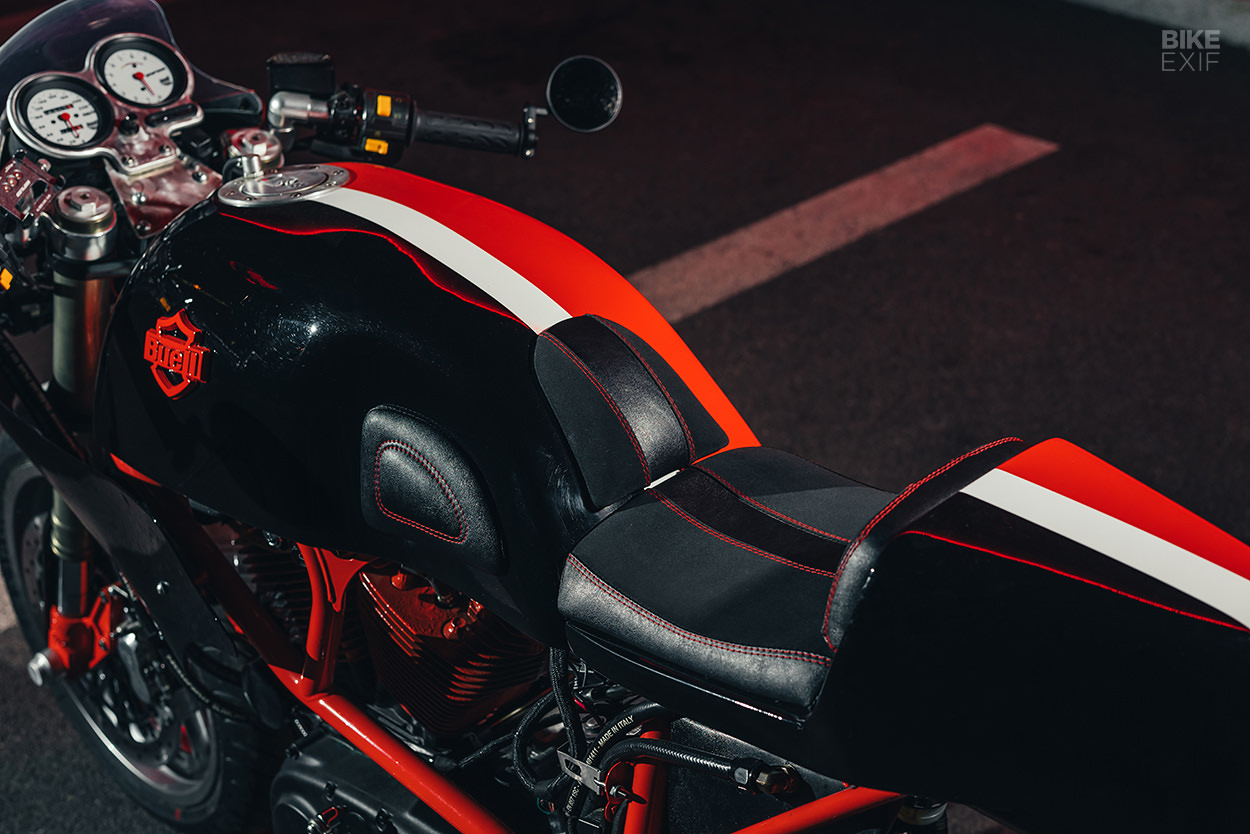 The new ‘tank’ is, in reality, a fiberglass cover sitting over the original tank, and derived from a 1980s Ducati 750 SuperSport. It’s been tweaked with softer curves in the rear and on the sides of the tank are 3D printed badges that unite the logos of Harley and Buell.

The tail is fiberglass too, taken from a mold used by endurance motorcycles, and finished with a leather saddle designed by L. R. Leather Goods. 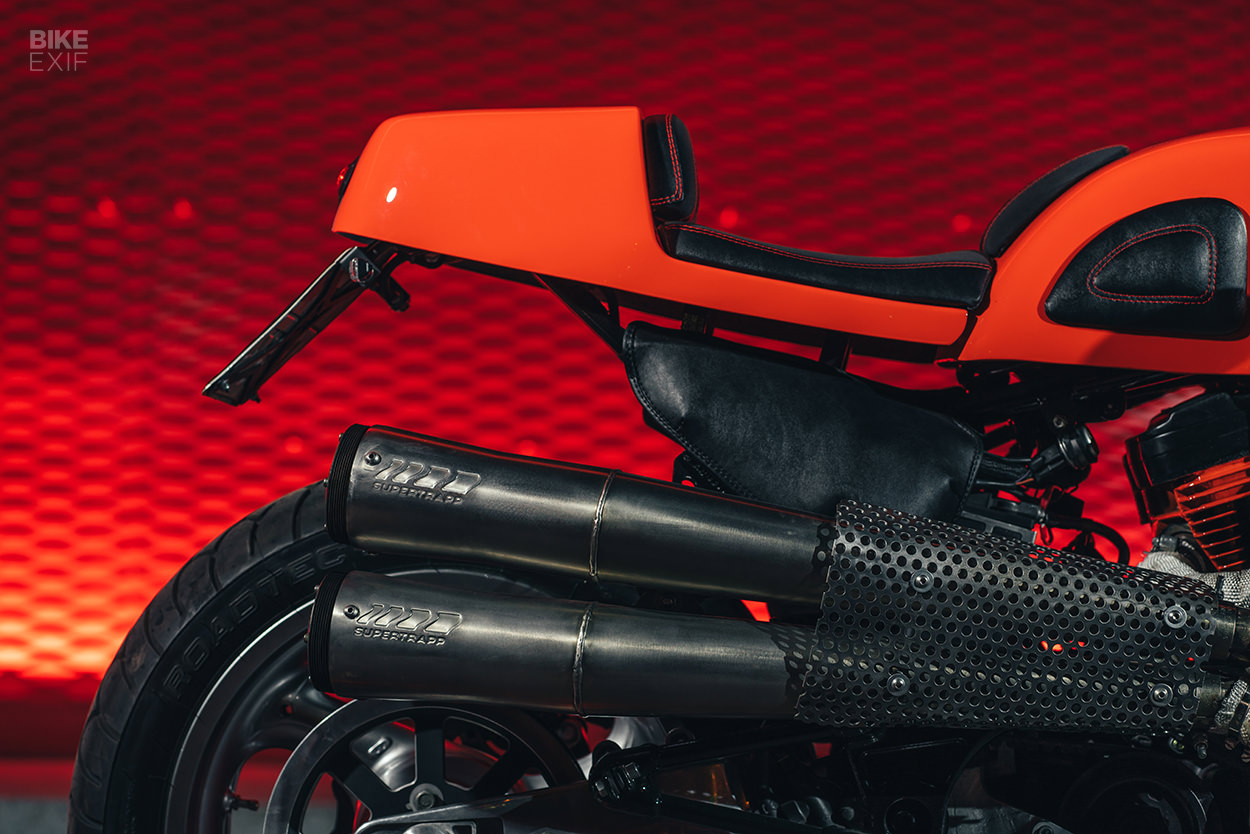 Another change that catches the eye is the exhaust system. Most Buells, including the S1, had a muffler set low under the engine as standard, but Giacomo wanted something different. So he’s modified the manifolds to fit a SuperTrapp exhaust originally designed for the XR1200.

At the front, there’s a new braking system with custom-made double discs and Discacciati brake calipers, and Tommaselli clip-on bars with a USB outlet (and cellphone holder). The rims look as good as new, but they’re not—they are the stock S1 wheels with a slinky ‘gray chrome’ finish. 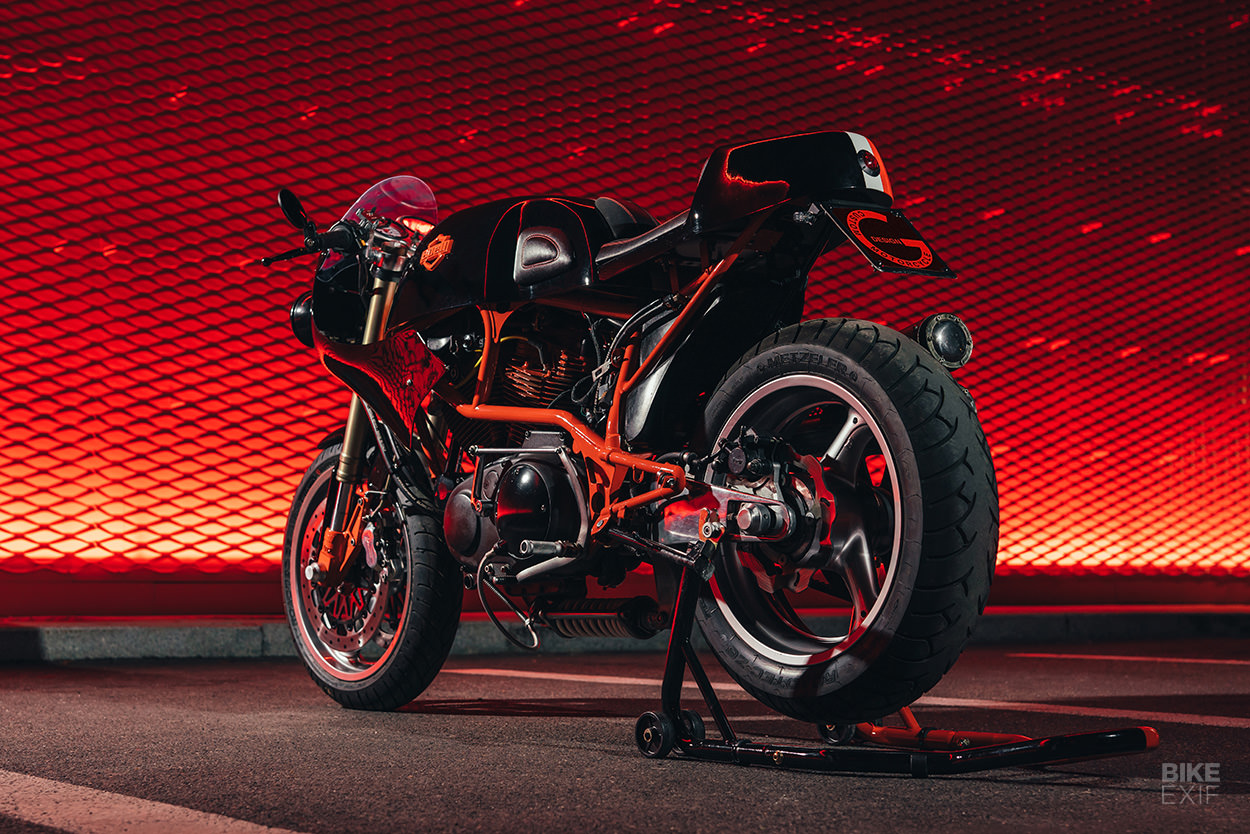 The engine gets a fillip via a DynoJet control unit, which is hidden behind the leather side panel. With the new exhaust and a foam air filter, it’s made the Buell ‘a real fiery horse.’

It’s one of those bikes that we’d love to throw a leg over and ride, but sadly, that isn’t going to happen. But if you’re lucky enough to be visiting the Biker Fest in Lignano Sabbiadoro in a few days, you’ll see this stunning machine on display there. 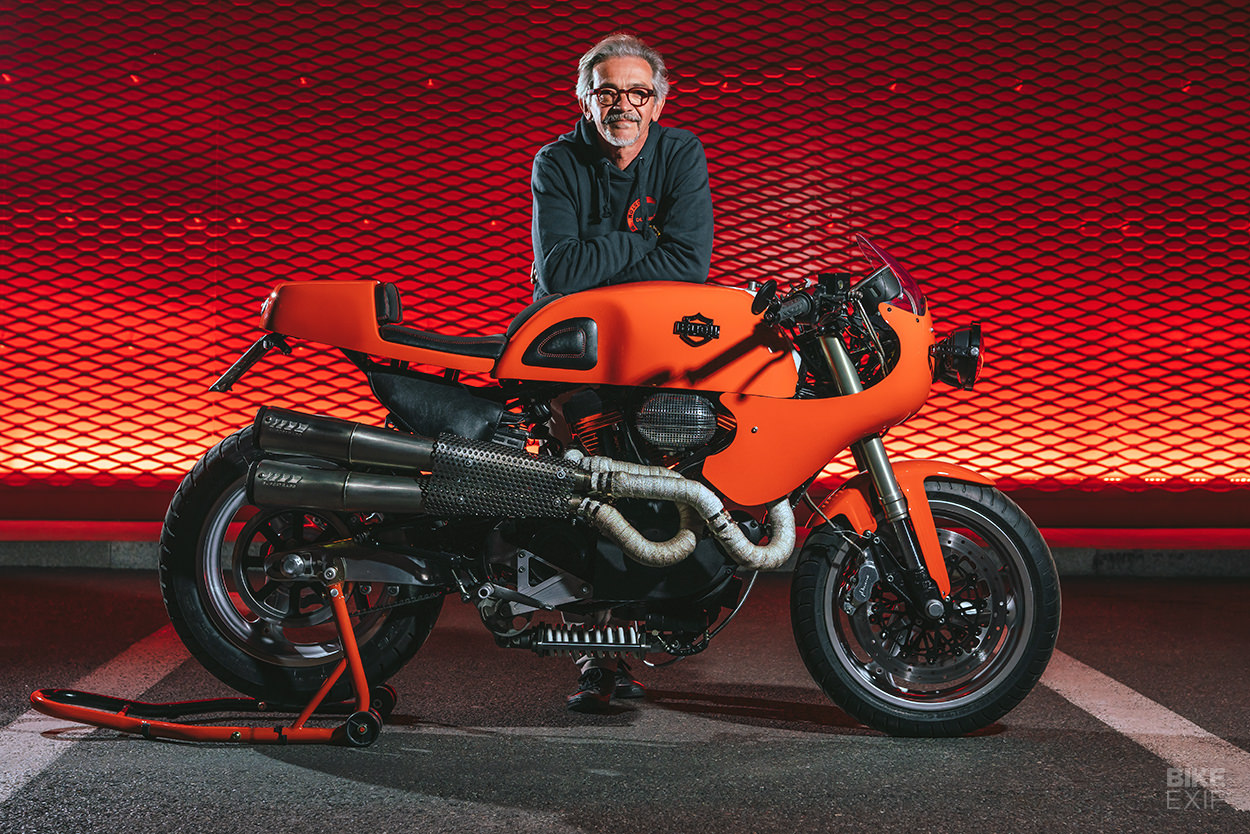 And towards the end of May it will pop up in London, at the Bike Shed show, alongside a previous GDesign creation—the ‘Elettracker’ board tracker that we featured last year. That’ll be a stand worth visiting. 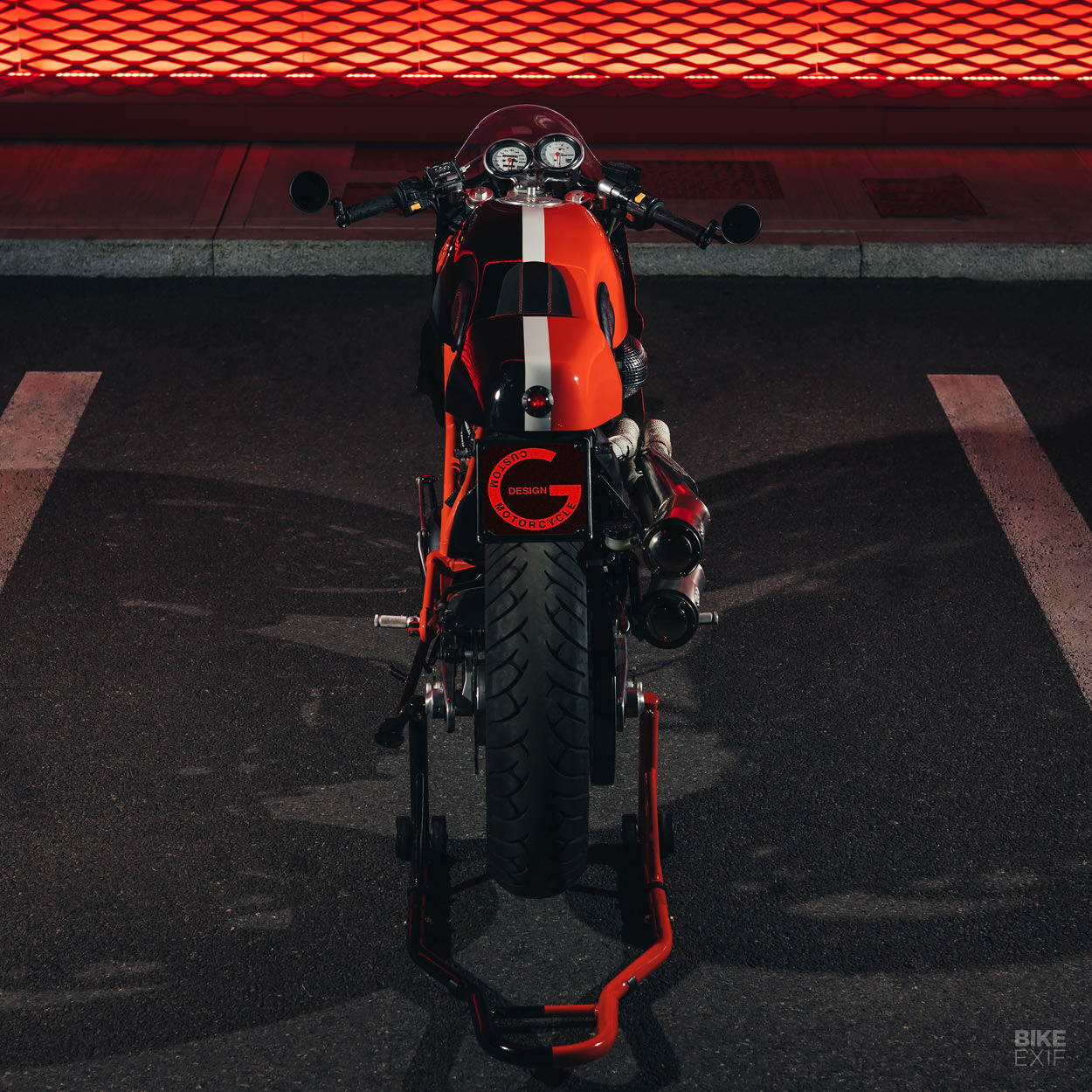