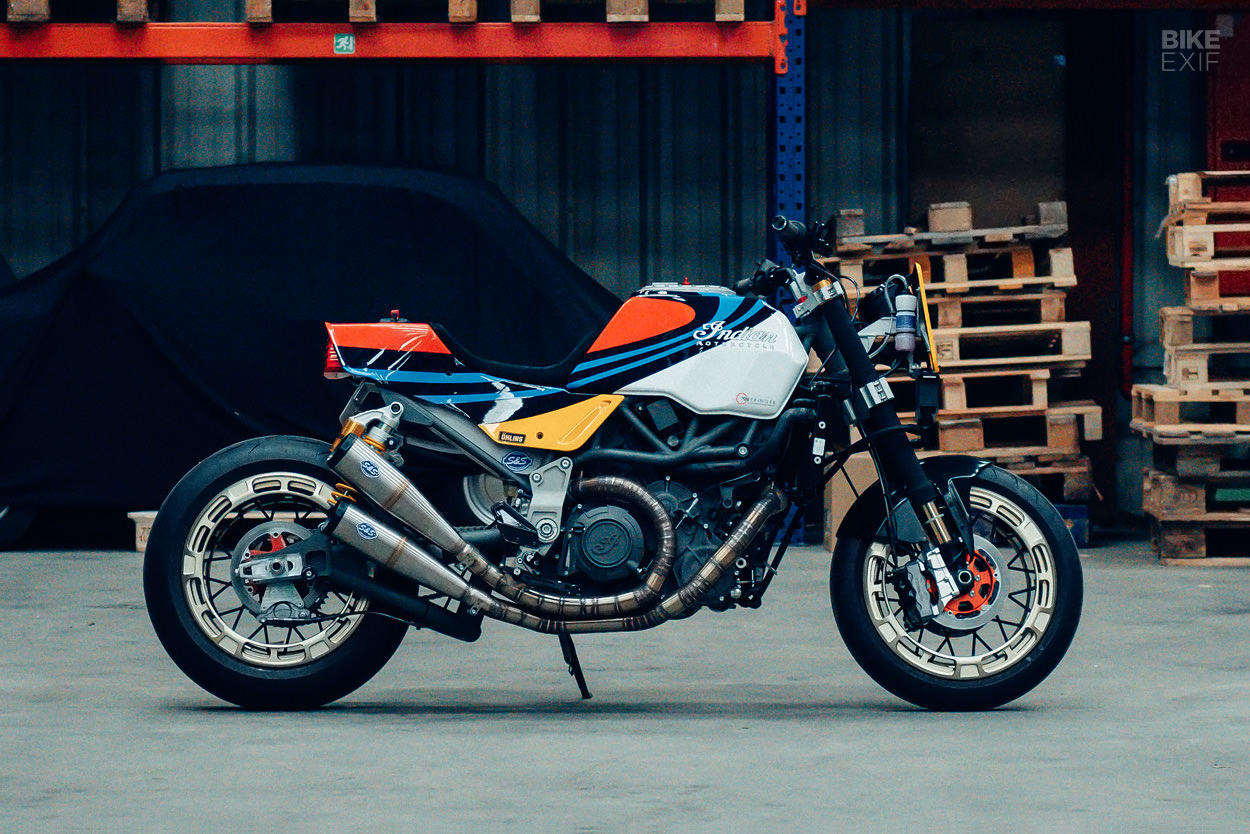 We love Brice Hennebert’s approach to building custom motorcycles. He’s passionate about retro race bikes, and injects that sense of performance and brutalism into all of his builds. We saw it on his bonkers land speeder, Appaloosa, and he’s just pulled the same trick with this Indian FTR 1200.

The man behind Belgium’s Workhorse Speed Shop has dubbed this one the ‘FTR AMA,’ and it’s no secret why. There’s more than just a little classic superbike influence here, from the upright riding position to the chunky bodywork. And it’s loaded with special little details too. 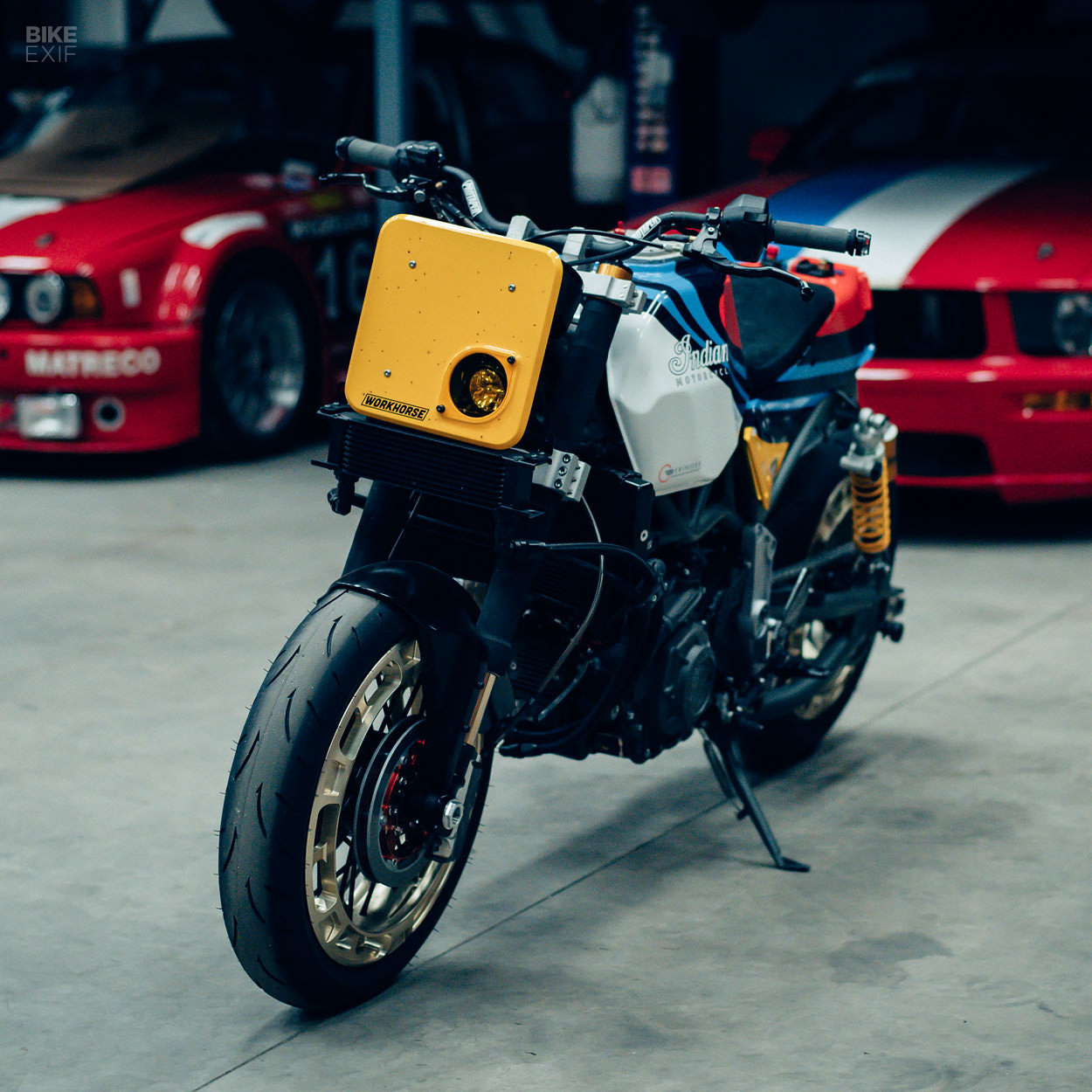 “The brief was pretty open: something colorful and as sharp as a war tank,” Brice tells us. “The only restriction was that the paint be inspired by the Martini Racing livery.”

“After some research and brainstorming, I based the look around AMA SBK racers from the 80s and the rally cars from the same era. The main influences were the Lancia Delta HF, mixed with Bol d’Or 750s and some muscle bike DNA.” 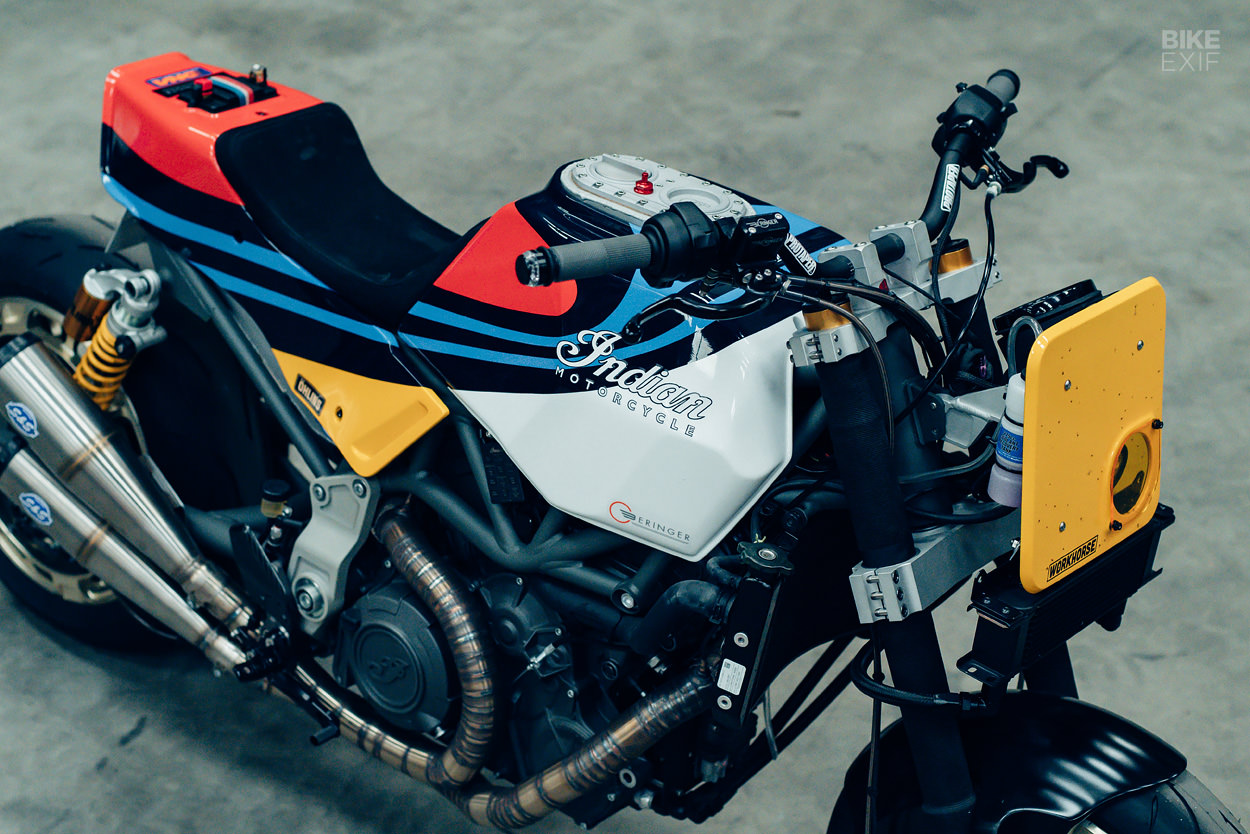 Brice actually had another FTR 1200 build going on at the same time as this one, commissioned by the owner’s brother. He went in a totally different direction with it though—both aesthetically and in terms of his design process. That bike was conceived using clay shaping techniques, while the FTR AMA was an exercise in digital mastery.

“I used direct CAD design based on a 3D scan of the FTR chassis,” Brice explains. “Then, all the body parts were 3D printed and reinforced with carbon fibre.” 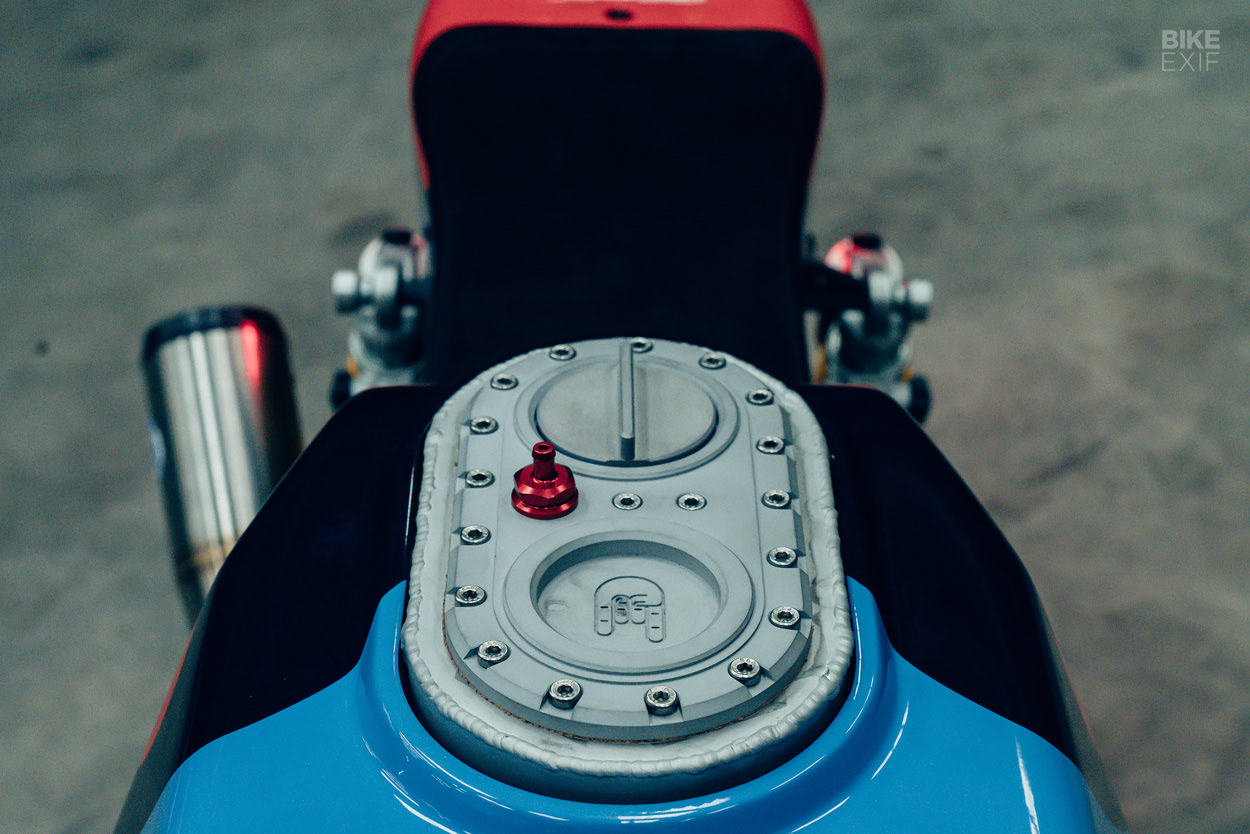 Those new body parts include the number board-style headlight surround, chunky fuel tank and blocky tail section. But they only tell a part of the story. Hiding underneath and between them are a bunch of custom parts that pull the whole thing together.

For starters, the fuel tank is just a cover. Mounted beneath it is an aluminum fuel cell, with a secondary reservoir tucked under the seat to bring the total capacity up to the FTR’s original 14 liters. An endurance-style gas cap sits up top. 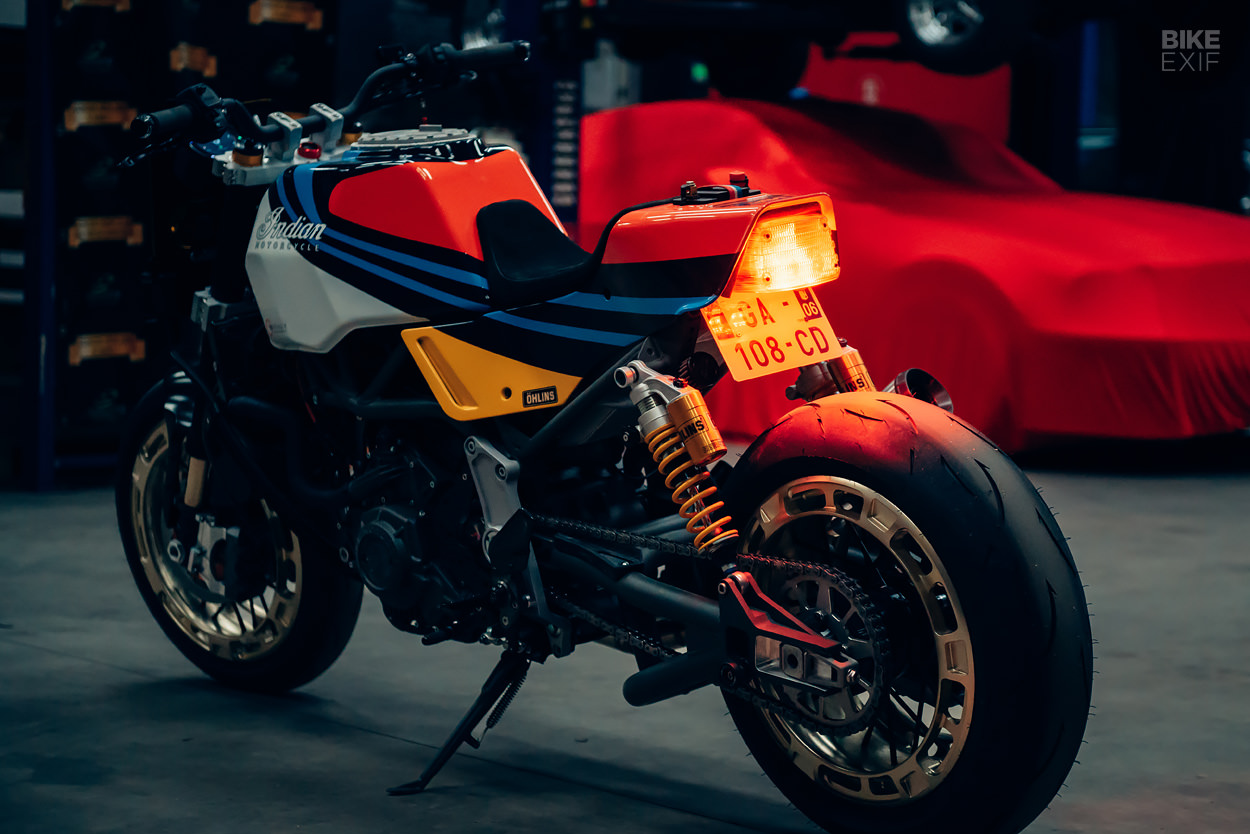 There’s another nod to endurance racers out back, where Brice has embedded the Indian’s battery in the tail hump for quick access. The brushed leather upholstery on the scooped race seat is courtesy of Workhorse’s go-to guy, Jeroen at Silver Machine in Ermelo, The Netherlands. Finishing off the tail is a big square taillight, scalped from an old bike and retrofitted with LED internals.

To push the 80s AMA vibe even further, Brice converted the rear end from a single to twin shock setup. The arrangement includes a pair of Öhlins shocks, connecting the modified subframe to a custom-built swingarm that also takes inspiration from the era. It’s 40 mm longer than before too, and is fitted with a 3D printed chain slider. 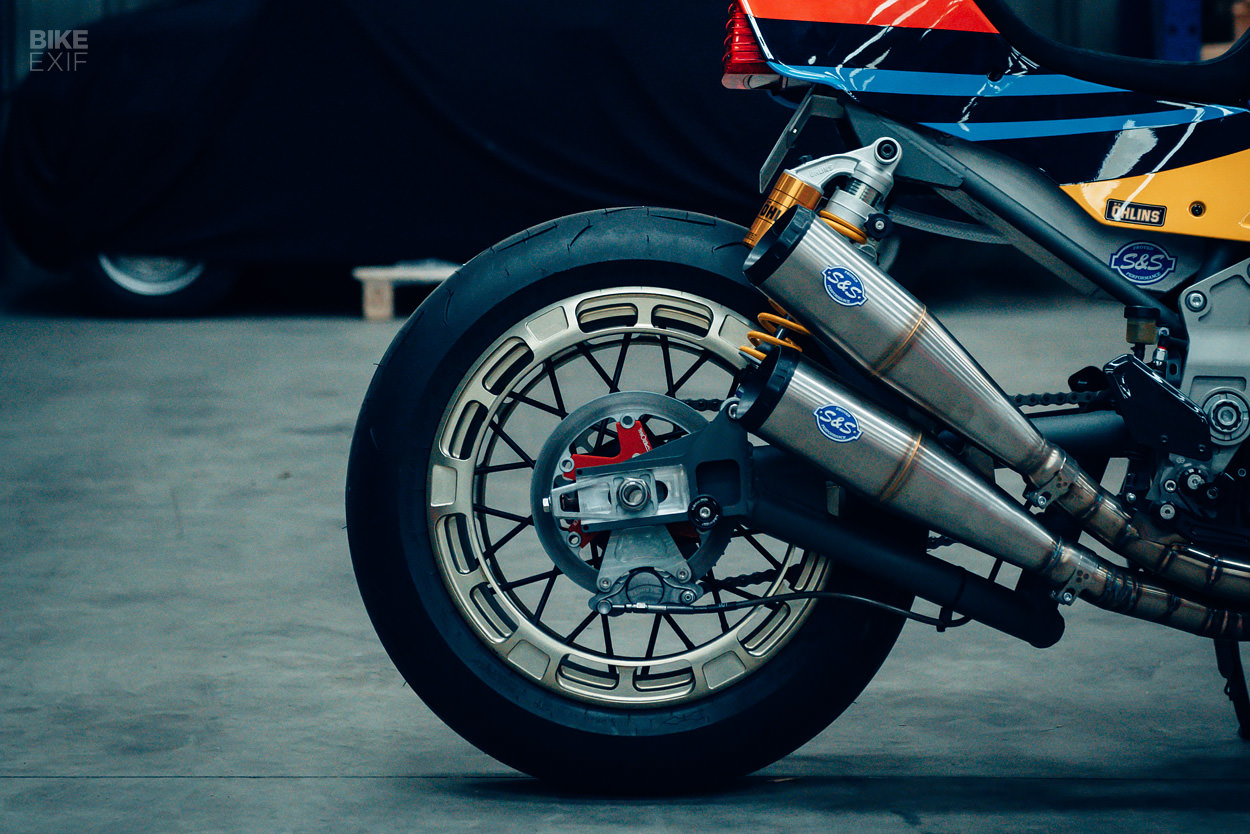 Brice had some help in this department, with Vinco Racing in The Netherlands handling all the machining on the project. That freed Brice up to focus on other areas of the build.

Working from Brice’s CAD drawings, Vinco not only fabricated the fuel tanks and swingarm components, but also made a new set of chassis plates and various mounting brackets for the bike. And they machined a set of yokes that mimic those on classic Honda Bol d’Or models, designed to hold the FTR’s 43 mm Öhlins forks. 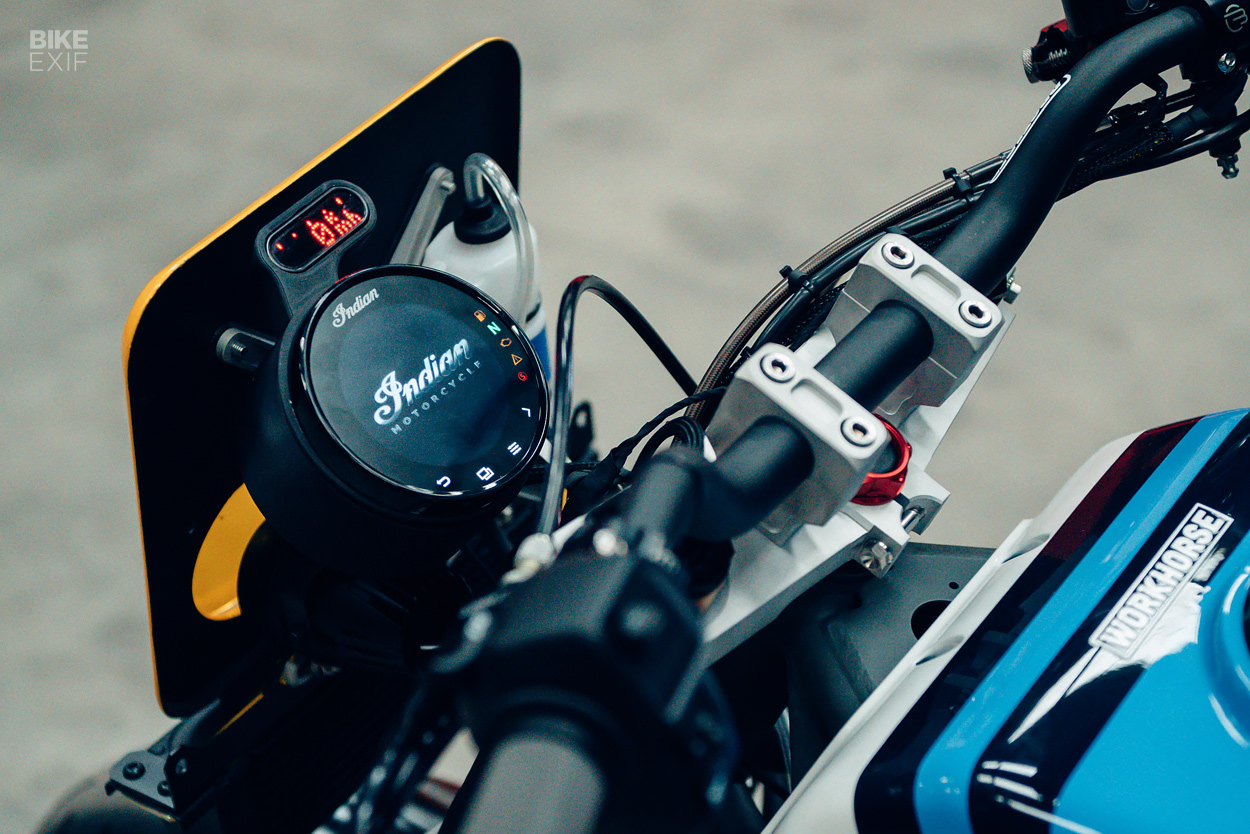 Vinco also built the frame-mounted bracket that holds the front number board, a PIAA race light and a Setrab oil cooler. Tucked behind the number board is the original Indian dash—kept so as not to lose any of the bike’s stock functionality. There’s a tiny Motogadget speedo mounted just above it, because Brice deleted the bike’s ABS, which also feeds the speed to the OEM speedo.

Other changes to the cockpit include a set of ProTaper handlebars, Beringer levers and Motogadget bar-end turn signals. 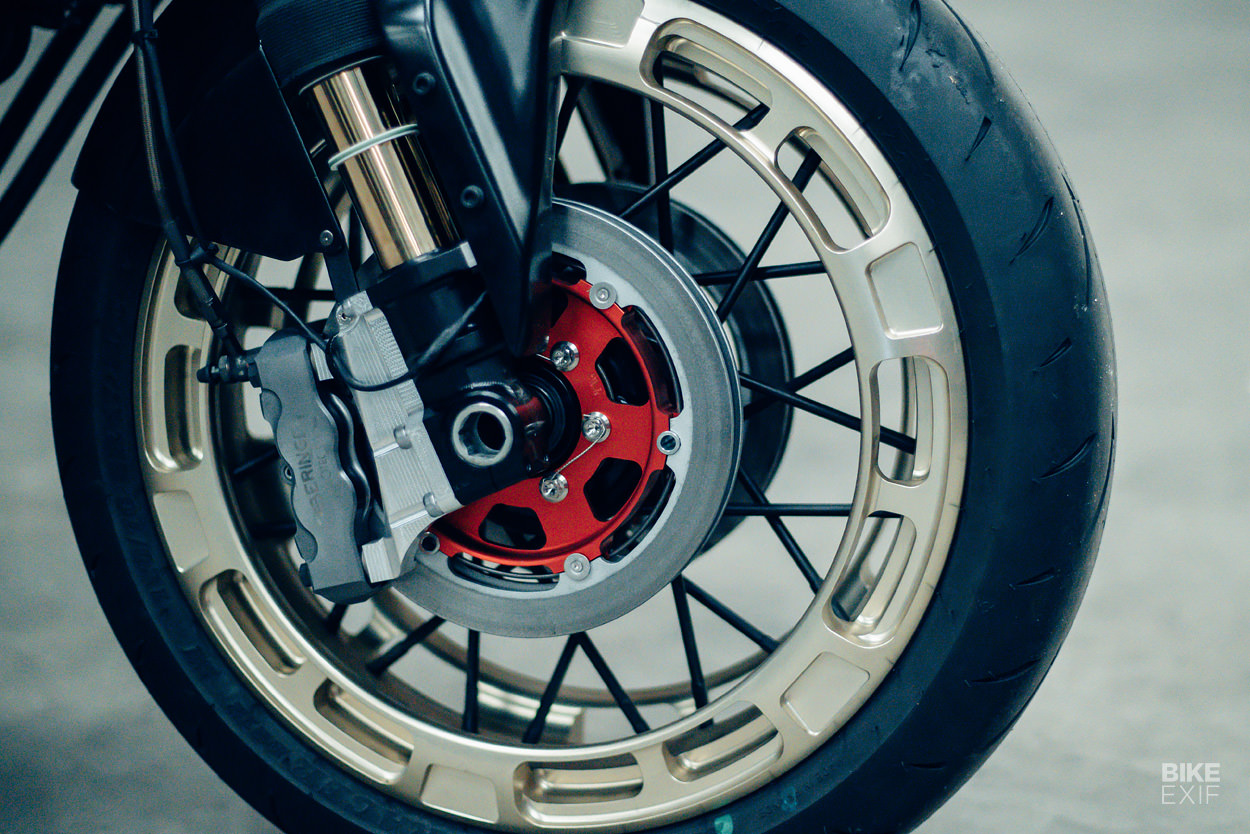 Another big visual hit comes from the FTR’s new wheels, which were custom made by JoNich Wheels in Italy, and loosely based off one of their existing designs. “The design makes me think of the turbo fan wheels used on the racing Lancia,” says Brice. “So that was a perfect choice for me.”

The wheels caused some clearance issues with the stock brakes, so Brice called in another favor. Beringer came to the party with their 4D braking system, complete with custom colors to suit the overall design. 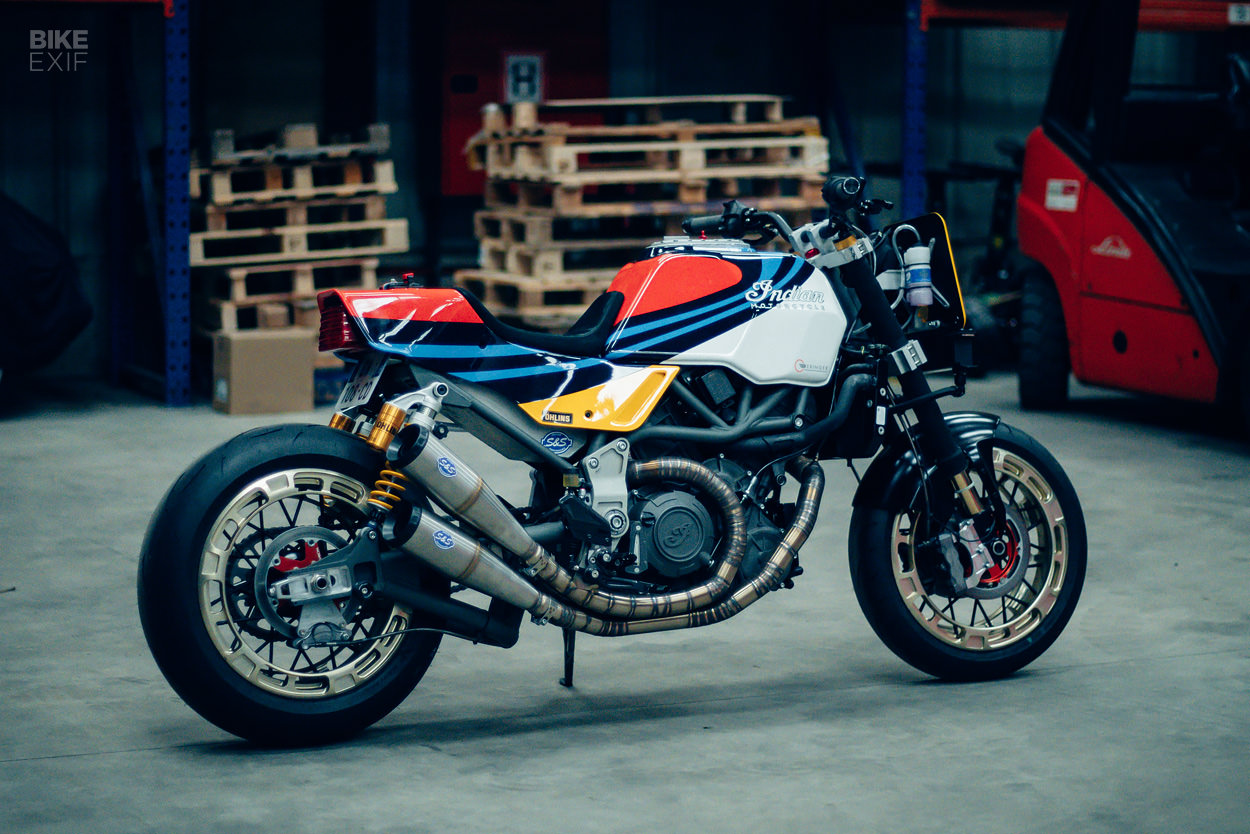 Rounding out the spec sheet is a custom pie-cut stainless steel exhaust system, running into a pair of S&S Cycle mufflers. Under the hood you’ll find a pair of DNA filters, mounted on 3D printed intakes.

Considering the brief, and the influences Brice drew on, the Indian’s new livery also hits the mark spectacularly. Axecent in Japan penned the design, which Brice’s friend, Fabian, then laid down. Martini-inspired paint jobs can so easily go wrong, but this one’s a winner. 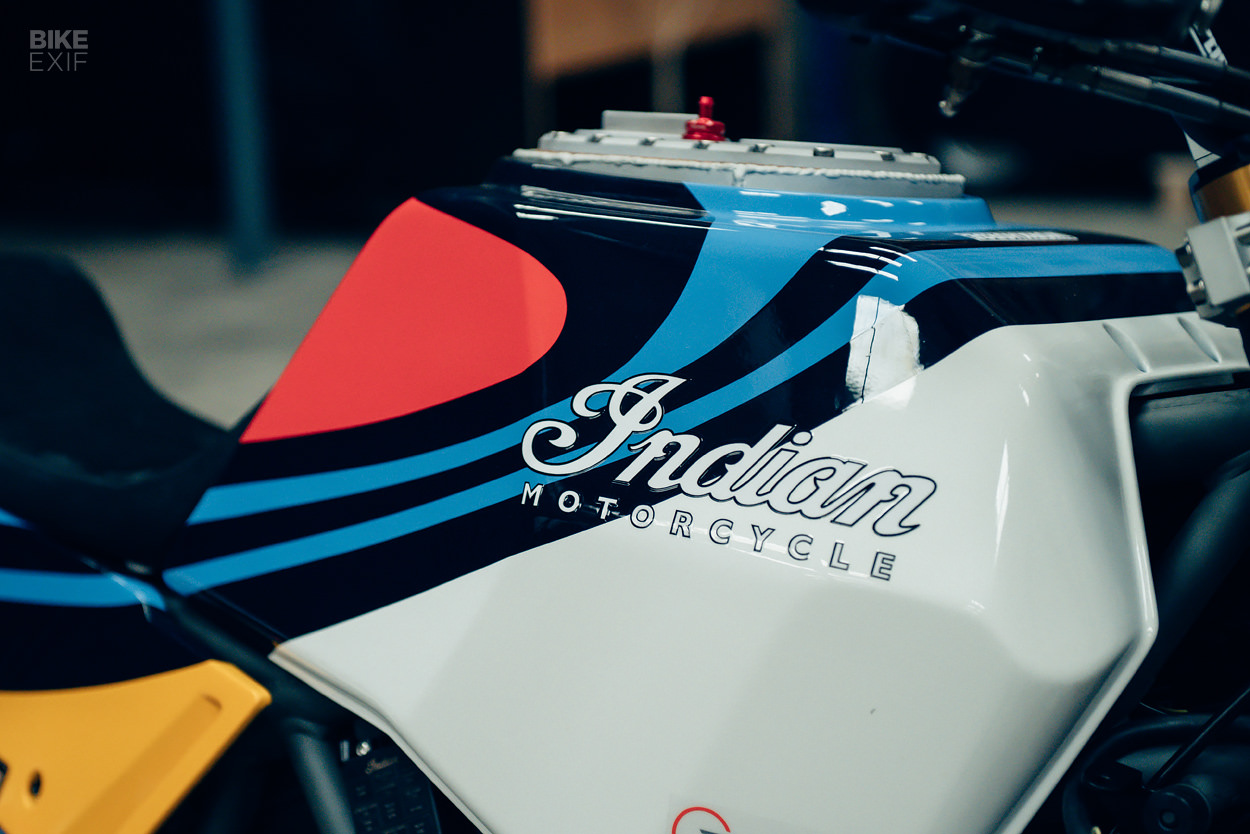 Brice describes the FTR AMA as “aggressive, massive and a real pleasure to ride.” We call it retro muscle bike perfection. 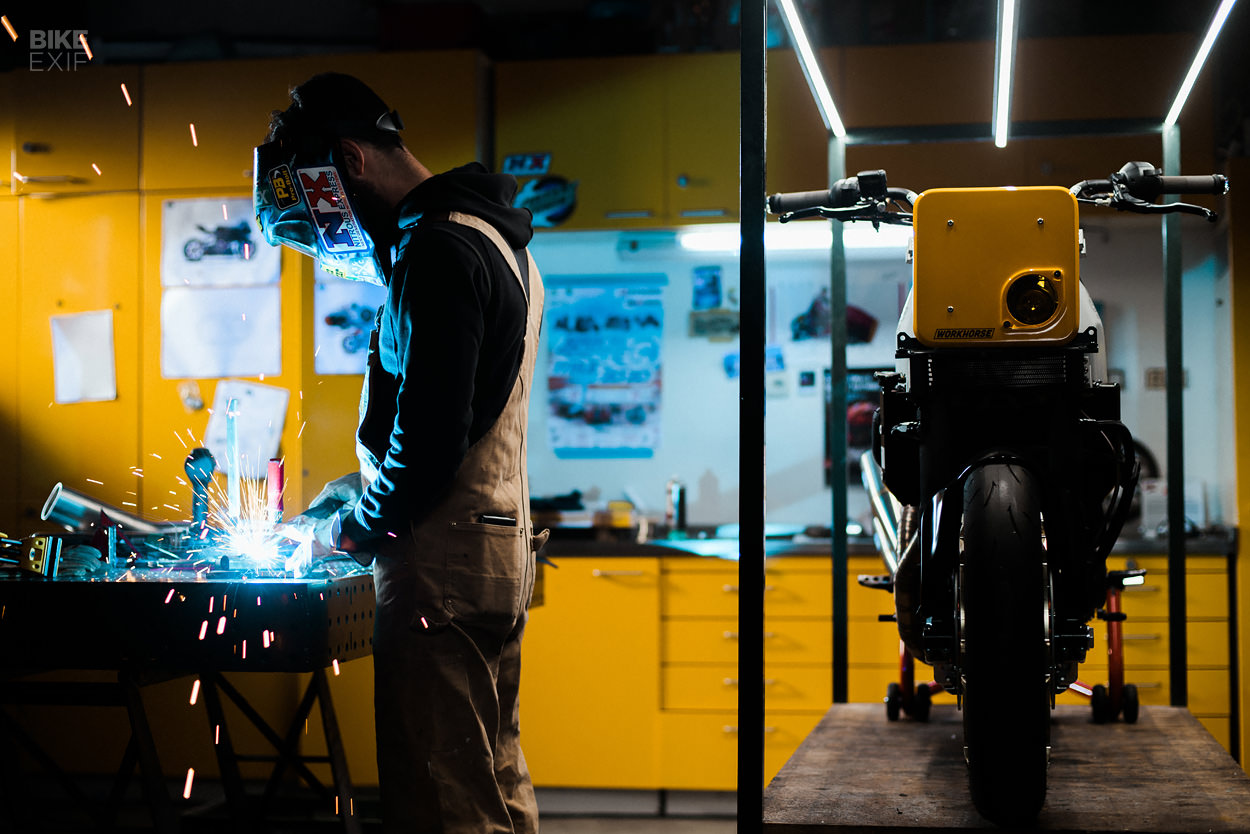