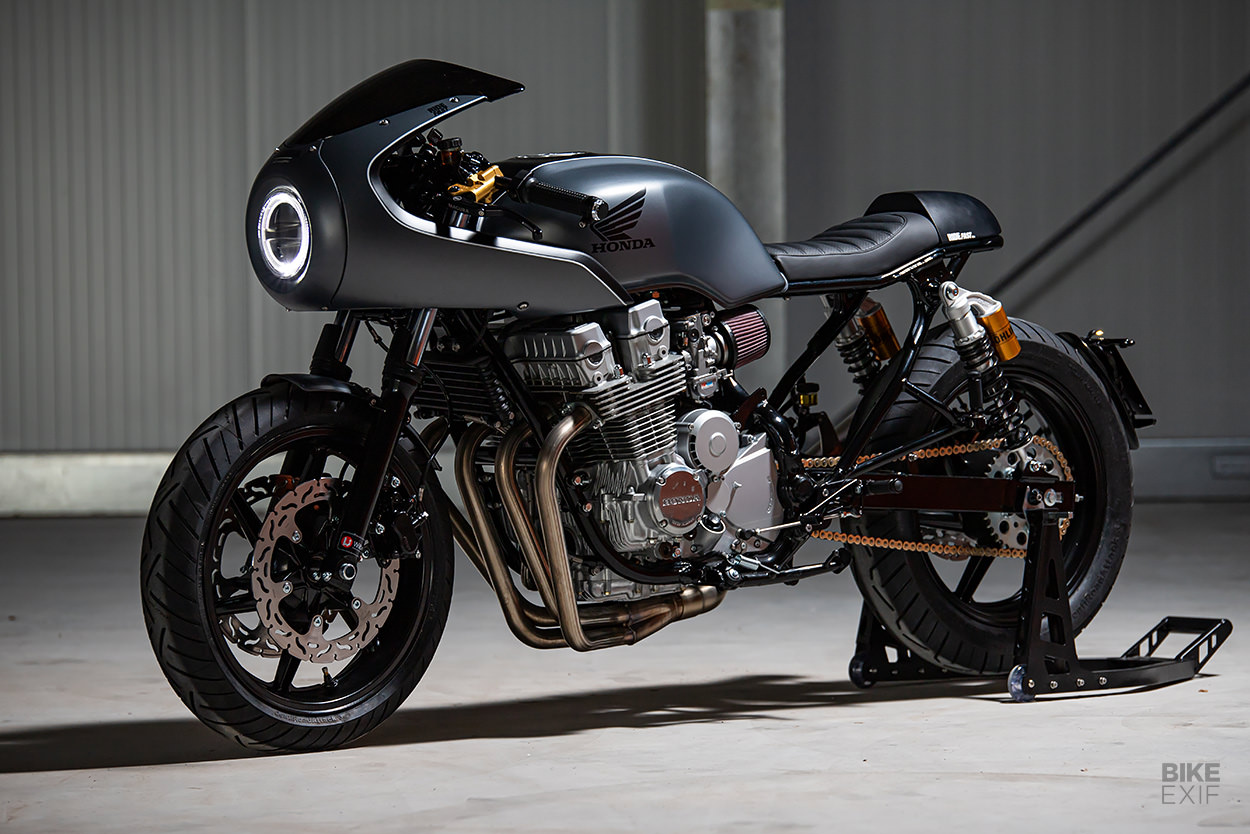 For custom motorcycle builders that skew towards older bikes, nothing satisfies quite like finding a clean, low-mileage donor. But finding a motor with literally zero miles on it? That’s the Holy Grail.

This purposeful cafe racer was built from two components: a beat-up 1992 Honda CB750, and a separate CB750 engine that had never been fired up. It’s the work of Holger Breuer, who builds bikes part time as HB-Custom from his workshop in the German maritime town, Husum. 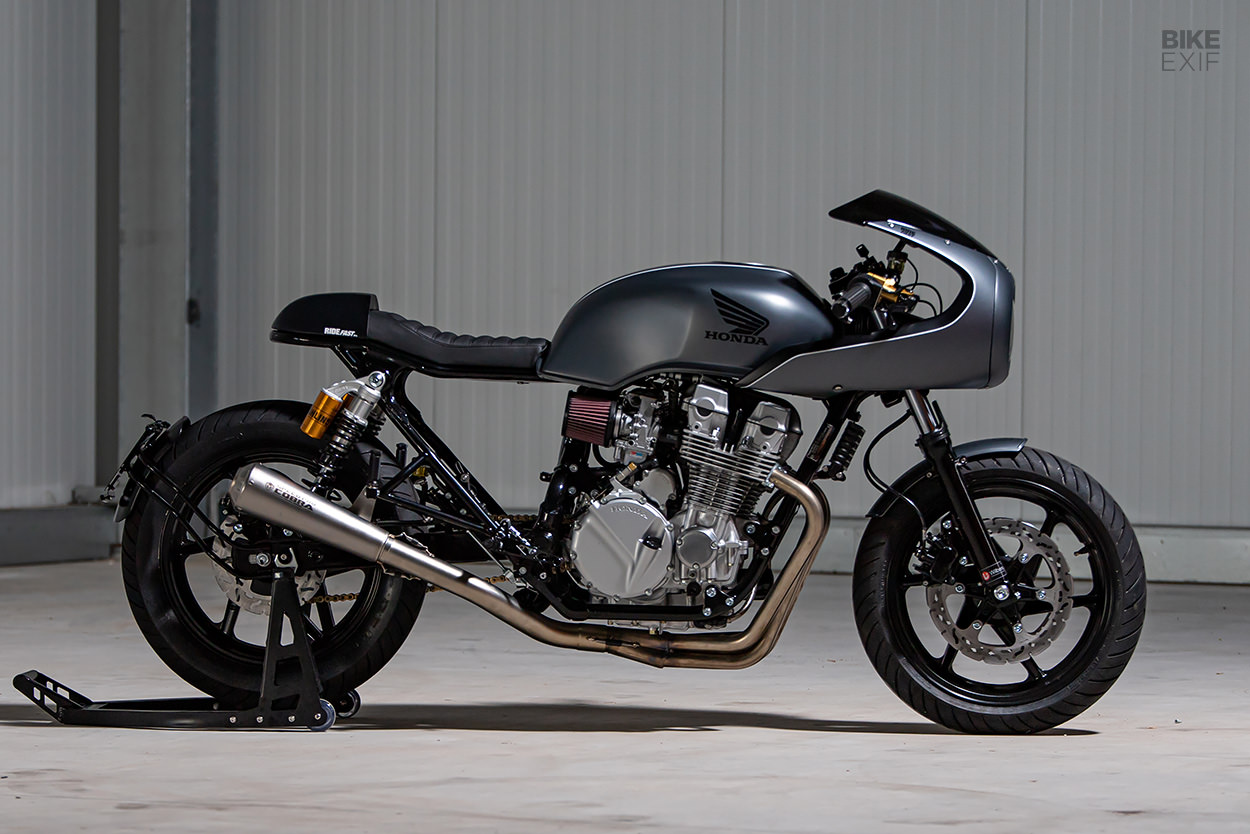 The commission came from a customer who already had one HB-Custom creation in his garage, and wanted a second. He also supplied the donor bike and extra Honda motor—which has a remarkable story behind it. “The engine was originally in a brand new bike,” explains Holger, “which was damaged heavily during transport from Japan to Europe.”

“The frame was ready for the scrap metal heap, but the engine did not take any damage. Since then, it never ran… until two weeks ago.” 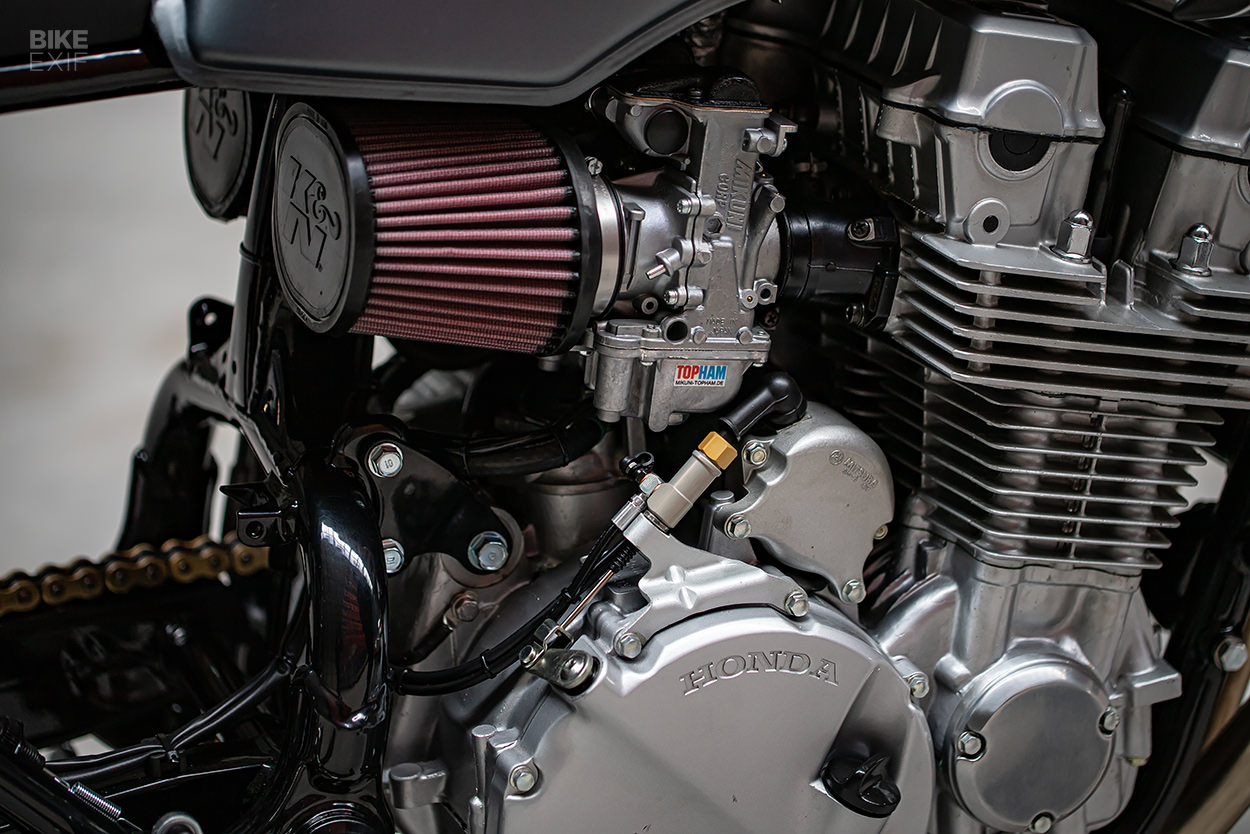 Popping a brand new engine into the chassis meant Holger could focus on the rest of the bike—but it also removed the temptation to crack the cases open. Instead, Ingo Wrubel from Old School Superbikes was called in to eke out as much power as possible.

With a Mikuni RS 34 mm carb kit and twin K&N filters, plus clever tuning, the CB750 now records a hefty 78 PS at the rear wheel. 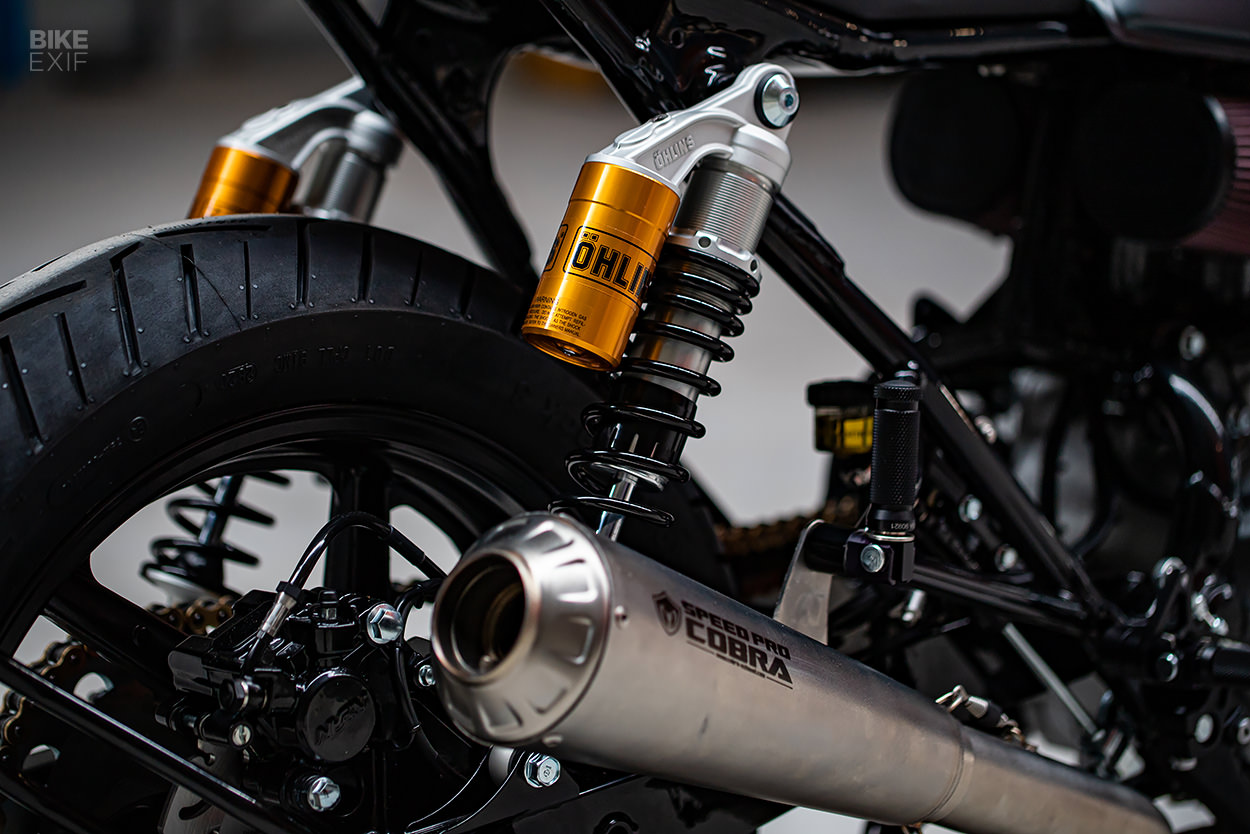 The burly exhaust system is a four-into-one system from Cobra, but Holger modified the mid section to run it higher and tighter.

Moving to the chassis, Holger swapped the fork internals for Wilbers parts, and installed a new pair of Öhlins shocks out back. The wheels and brakes are stock, but they’ve been upgraded with a new set of Brembo wave discs. 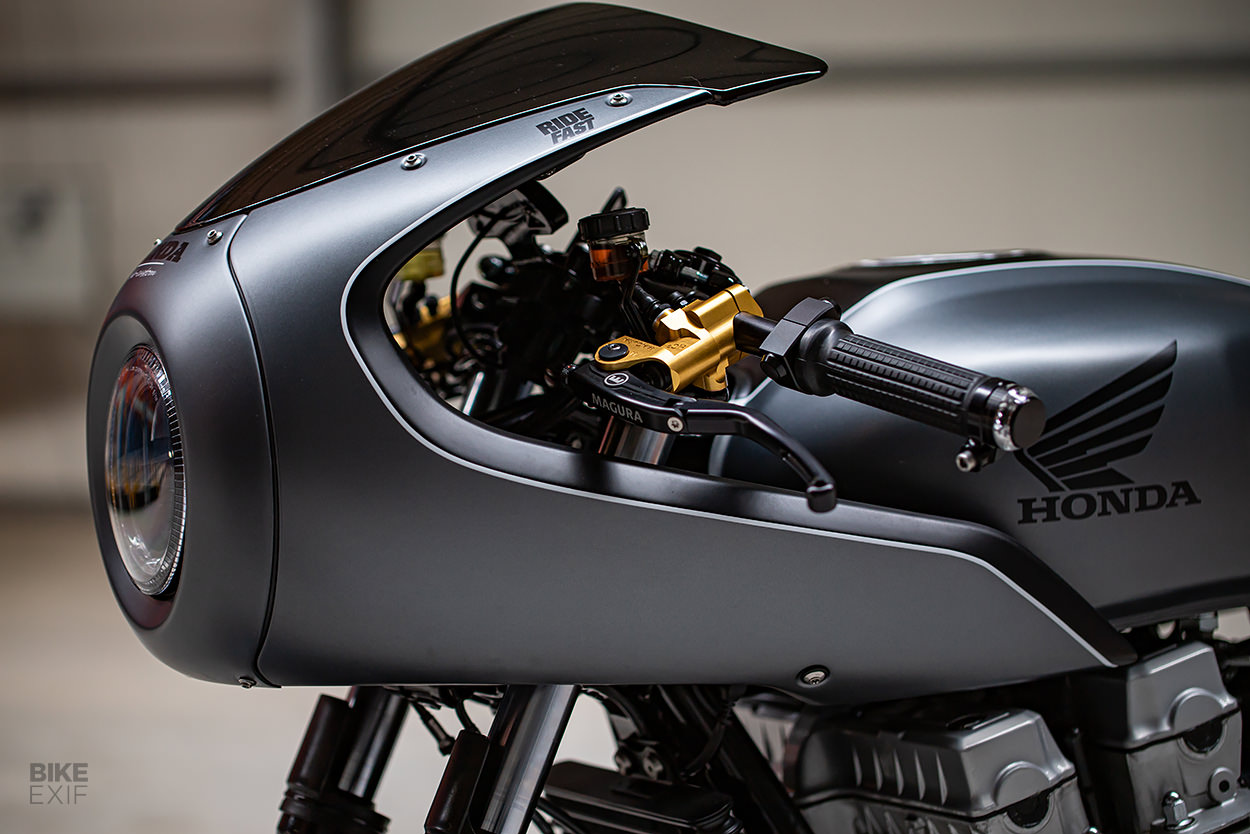 For the bodywork, Holger meshed together the Honda’s OEM fuel tank with a couple of clever add-ons. The front fairing is actually off a BMW R nineT Racer; Holger used its mounting bracket too, but tweaked it to attach it to the Honda’s steering neck.

The LED headlight inside the fairing is a JVB-Moto unit. 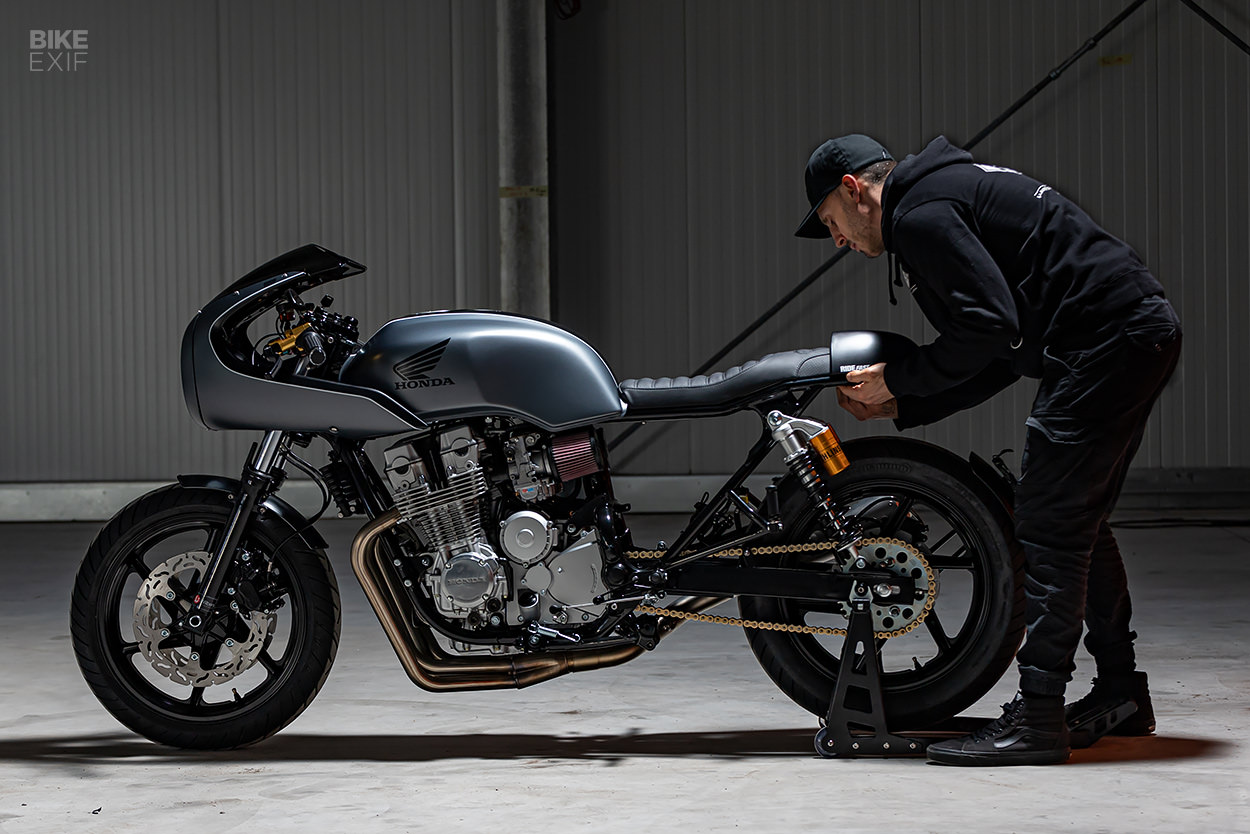 The Honda’s owner wanted a cafe racer, but he also wanted the ability to ride two-up. So Holger built a two-person seat, with a hand-made aluminum tail bump that can easily be removed. The license plate sits further down, on a swing-arm mounted bracket that also holds a pair of taillight and turn signal combo LEDs.

Holger’s take on the CB750 doesn’t maintain a classic straight bone line, but that’s intentional, and it plays into the aesthetics of the original fuel tank, too. So the subframe’s completely new, and deliberately kinked. “It was important for me to have this small step up,” he explains, “because just having a straight subframe looks too boring.” 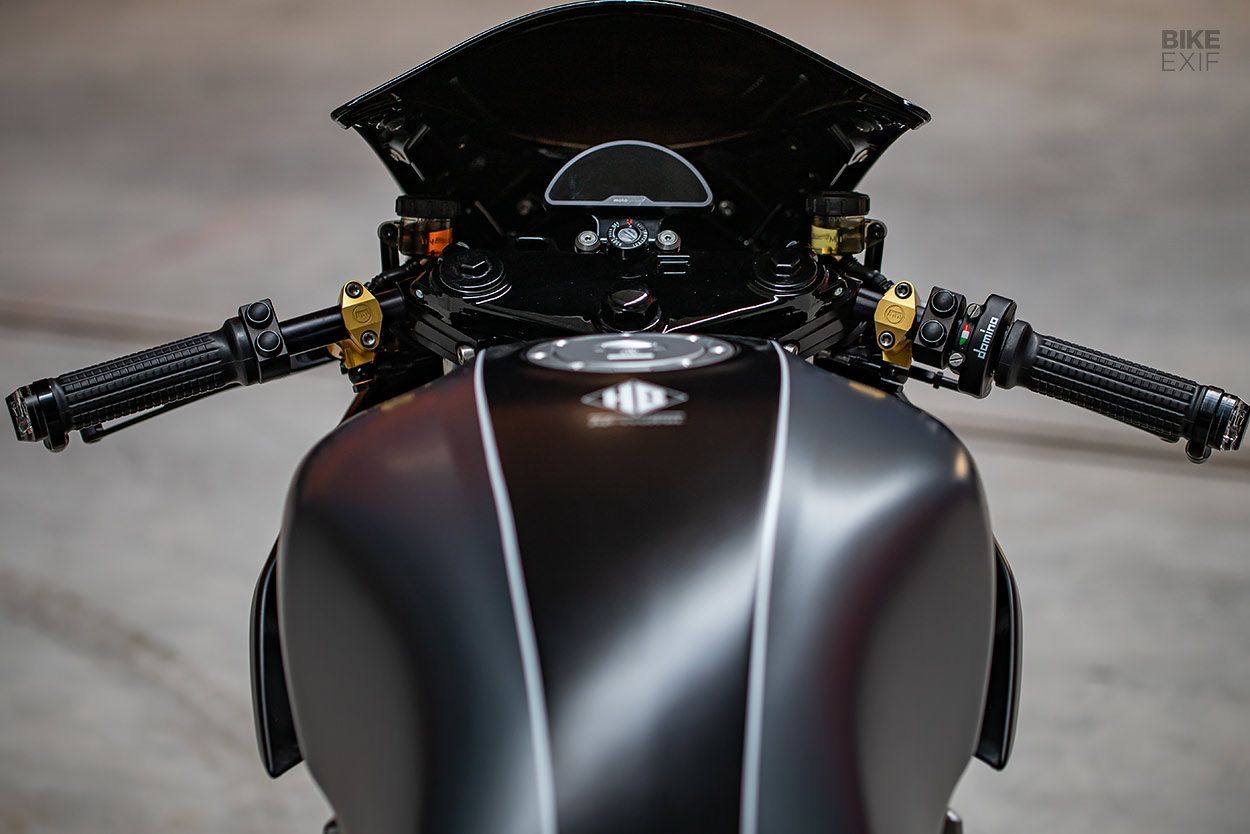 Most of the cockpit is new too, with a set of Motogadget parts that include the digital speedo, grips, switches and bar-end turn signals. The clip-ons are from Gilles Tooling, the throttle’s a Domino part, and there are LSL foot controls further down. 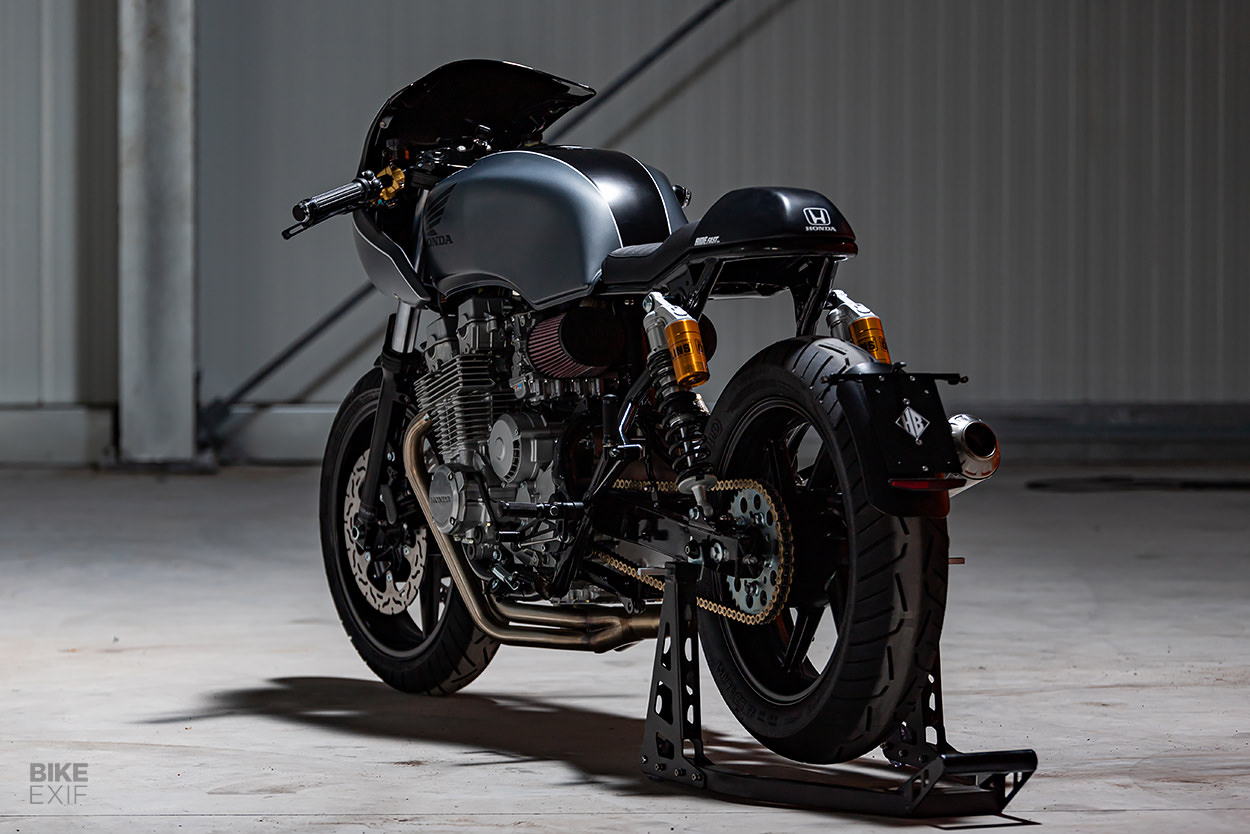 HB-Custom builds are known for being classy and tastefully judged, and this CB750’s livery drives that point home beautifully, with a grey paint code from Mercedes’ AMG catalog. The branding’s neat too, with a set of Honda ‘wings’ on the tank, and the company’s corporate logo on the tail.

And if you look closely, you’ll also notice that the gold controls up front match the shock reservoirs out back. 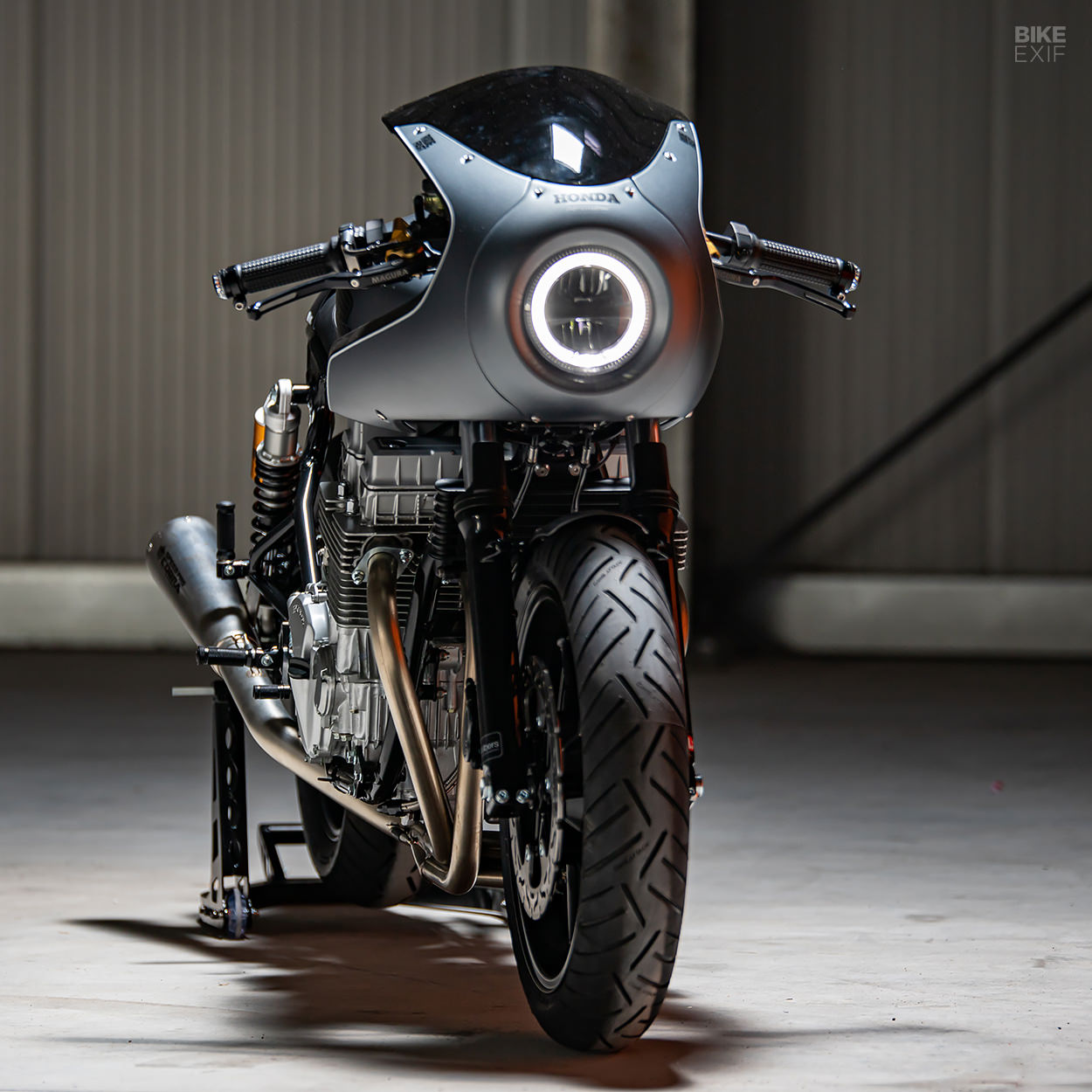 Thanks to the global pandemic, Holger’s client had to exercise massive amounts of faith, since lockdown restrictions prevented him from visiting the workshop during the build. In fact, he couldn’t even pick it up when it was done—a professional bike delivery service had to handle that.

Now that it’s in his hands though, we bet he’s amped to start racking up some miles—decades after the engine left the factory. 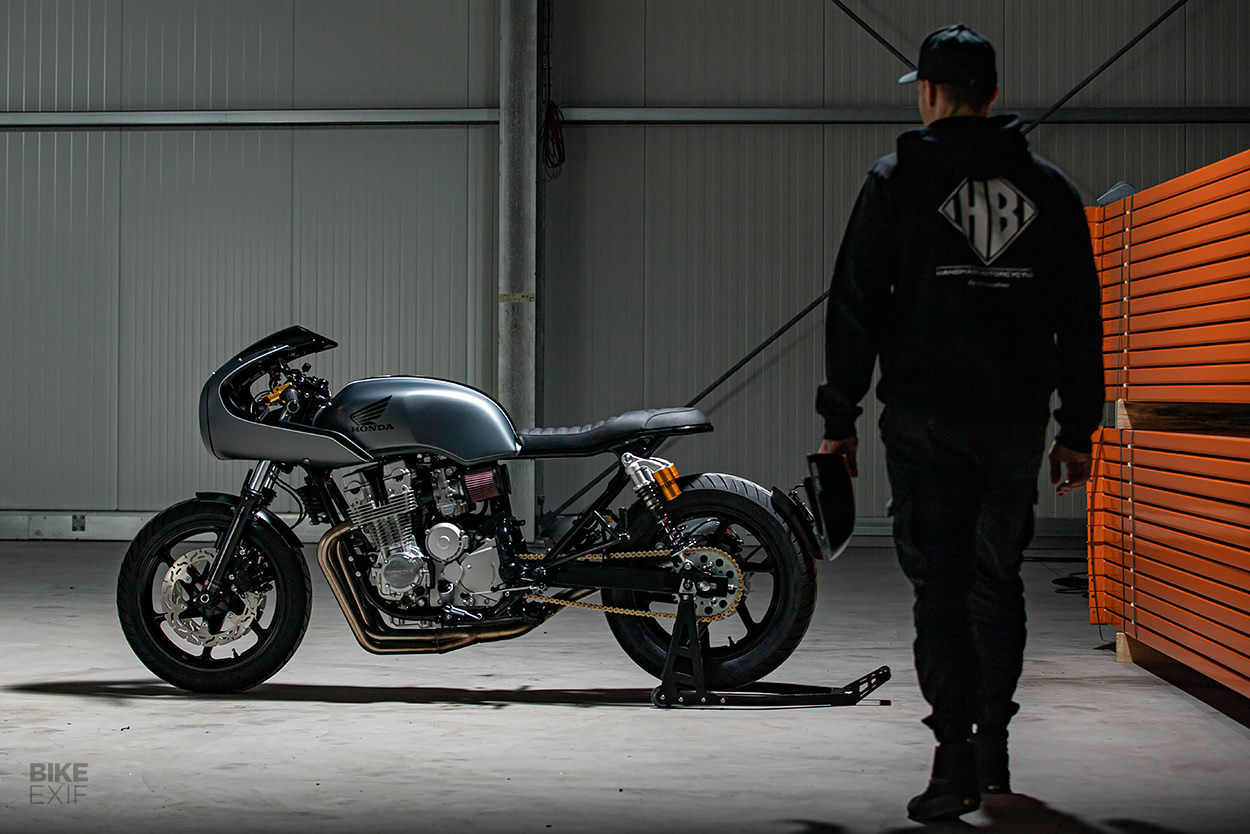