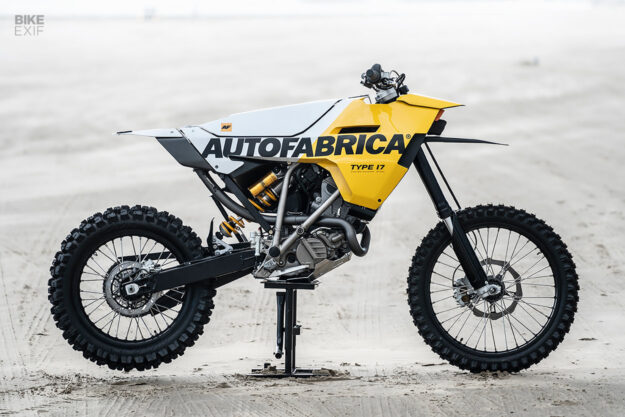 If it wasn’t for the massive logos that run the length of this creation, we wouldn’t have picked it for an Auto Fabrica build at first glance. But the closer you look, the more you see the English workshop’s DNA everywhere. It’s also the first time they’ve customized a bonafide enduro bike—so this project was never going to be mild.

Designated the ‘Type 17,’ the build was commissioned by a client who told the Auto Fabrica brothers, Bujar and Gaz Muharremi, to “go nuts.” Sifting through archived designs with their client, Bujar and Gaz were delighted when he chose one of their more extreme concepts. It had originally been penned for a KTM enduro, but the client wanted something more unconventional—so they settled on a 2009-model BMW G450X. 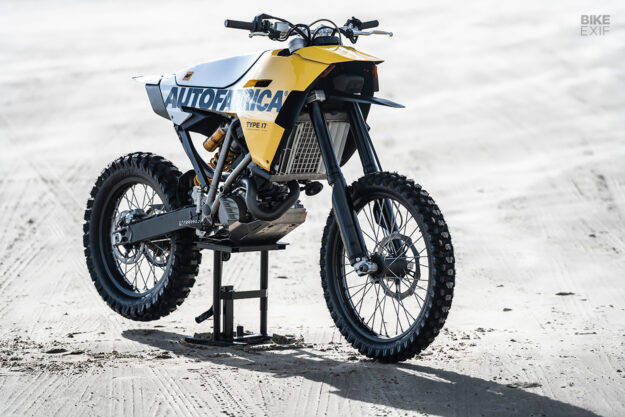 As far as enduro machines go, the G450X is fascinating. Built during a time when BMW owned Husqvarna, its short-lived production only ran from 2008 to 2011. Brimming with unconventional design, some aspects struck a chord—and certain components are now common among European off-road bikes.

The G450X’s 449 cc single-cylinder engine is angled forwards by 30 degrees, and the crankshaft rotates backwards, thanks to a drive-basket clutch setup. The airbox takes up the space where a conventional fuel tank would be, so the fuel cell is nestled between the subframe rails under the seat. We told you it was weird. 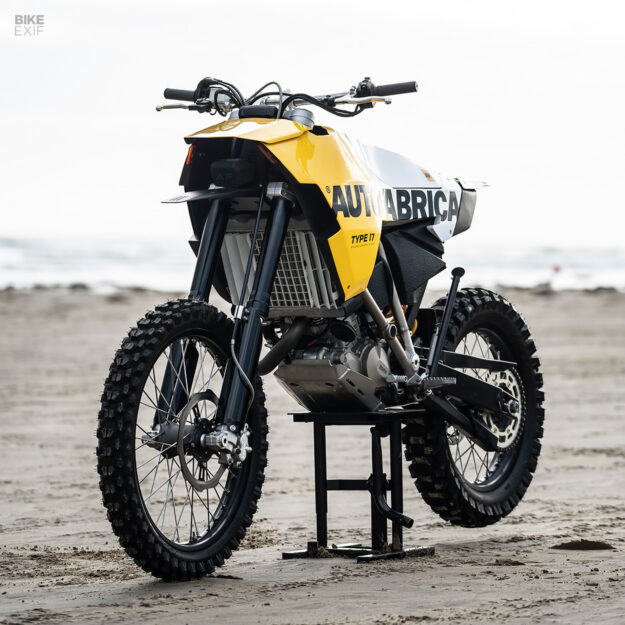 Rather than throw these quirky parts away, Bujar and Gaz decided to incorporate them flawlessly into their design. So they left all the whacky BMW engineering in place, and got started on their specialty: bodywork. With the bike stripped down, CAD (cardboard-aided design in this case) was used extensively to develop the concept.

Once they were happy with the mockup, Auto Fabrica hand-made the new bodywork from aluminum. Designed to work with the factory suspension, it flows so well you’d think it was a concept bike from a major manufacturer.

The G450X still resembles a dirt bike, but that aesthetic has been elevated, with a vibe that blends organic and mechanical elements. Large side panels channel air into the radiator, then taper towards the narrow tail section, just like a conventional enduro bike.

This also leads your eye towards one of the bike’s more unusual design elements—the seat. Or rather, the seat cover. Using a clever latch system, it pops off to reveal a plush seat that wouldn’t look out of place on a rally race bike. 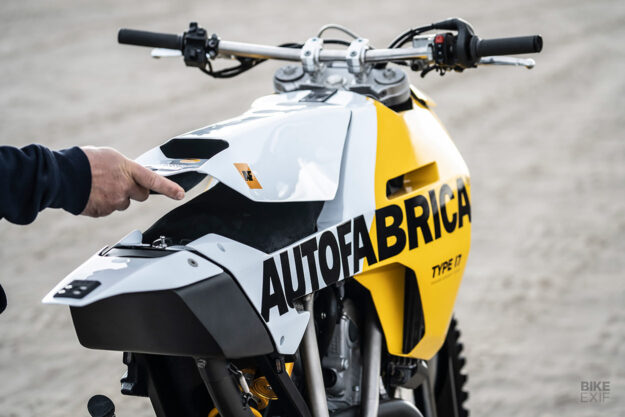 “We took the initial design that we’d shown our client, and started developing that over the new donor bike,” explains Bujar. “The design aesthetic from the beginning was a ‘mono-body’ setup. We kept drawing the side profile fully enclosed, without a seat or a dip where the seat would be, and loved the look.”

“I was super conceptual, but weirdly, it made sense. This is where the idea for the seat cover came from; why not have a cover for the bike that, when parked, is complete? Like a car has a door to reveal the interior.”

Admittedly it’s not the most practical arrangement. But it’s really just there for display purposes, and the bike looks just as good without it.

“We’re super pleased with how this turned out,” says Bujar. “It gives the bike two personalities, both more vibrant than I thought they would be. So much so, that a lot of our future concepts are adopting this seat idea.” 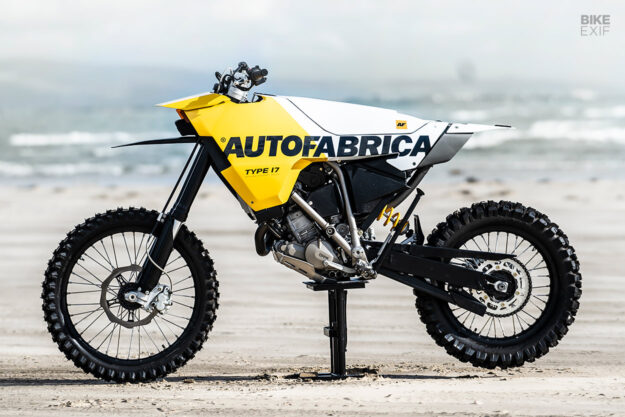 Classic Dakar Rally bikes were also the inspiration behind the color scheme and graphics. The brothers admit that bright colors and bold graphics are outside of their usually remit, but the bold design perfectly complements the bodywork.

An LED headlight is tucked away inside the ‘fairing,’ which also hides integrated LED indicators. Behind the front cowl sits a custom stainless steel handlebar that ties into the angular look of the bike. Eagle-eyed readers will spot the Highsider LED taillights, neatly hidden on either side of the subframe. 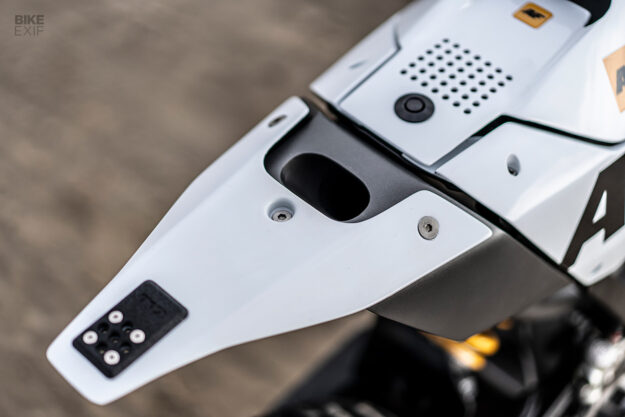 It wouldn’t be an Auto Fabrica special without a custom exhaust. For the Type 17, the guys sand-bent the headers by hand, but used a three-piece arrangement instead of their signature single-piece swept design. A box-style muffler is ingeniously blended into the rear fender, inspired by the Ducati Desmosedici.

“Type 17 was a lot of fun to build,” says Bujar. “We really wanted to create something unique and interesting, and introduce new ideas to the motorcycle world which we are happy about.” 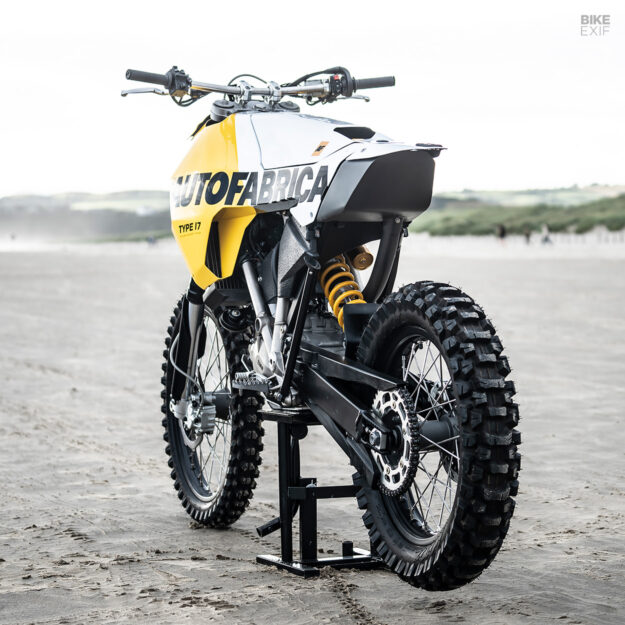 If you find the Type 17 as intriguing as we do, watch this space. Auto Fabrica intends to make more—but they’ll base them on KTM or GasGas donors, and will likely build the bodywork out of carbon fiber.

If this is what they can do with a dirt bike, image what they could do with an adventure bike. 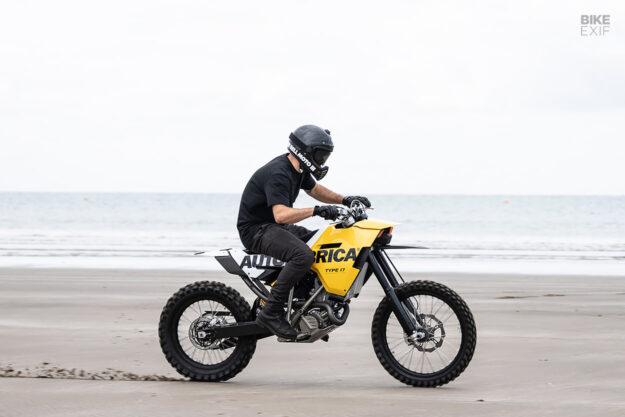