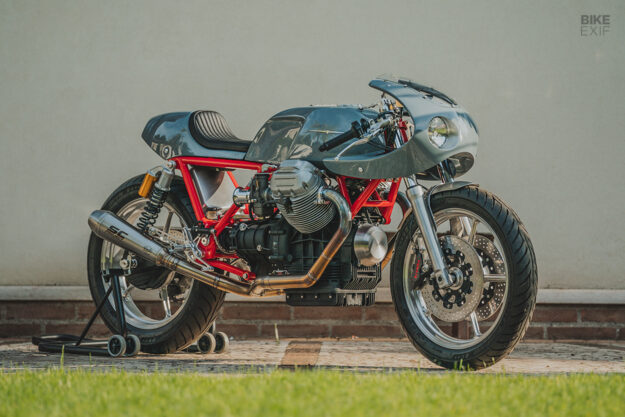 Commissioned builds are the lifeblood of any successful custom motorcycle businesses, but so is a strong portfolio. So it’s not unusual for a workshop to occasionally close their order book for a minute, and pour all their energy into building a showpiece. It’s a chance to show off the full spectrum of their talent and skill—without a brief or budget to rein them in.

This Moto Guzzi 1000 SP is one such build. On the surface, it’s a glossy café racer with a flawless stance. But the more you stare at it, the more you realize just how heavily this late-70s tourer has been customized. 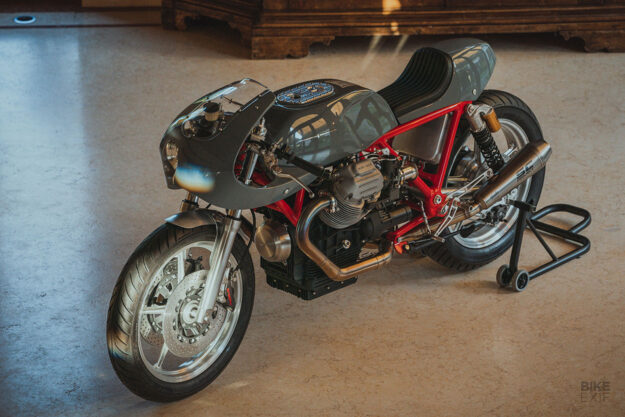 It’s the work of Massimo Rinchiuso, who runs Fuchs Workshop in the colorful city of Ravenna, in the Emilia-Romagna region of Northern Italy. Fuchs is effectively a one man band, though Massimo does occasionally farm out jobs that are outside of his area of expertise.

He purchased the 1979-model 1000 SP as a true basket case, with its parts divvied up into four boxes. “It was completely disassembled by the previous owner for a restoration attempt,” he tells us, “then let go over time.” The goal was to not only bring the Moto Guzzi back to life, but load it with an eye-watering list of mods. 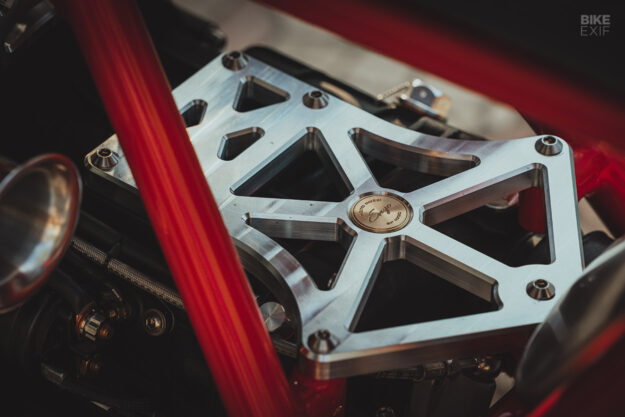 For starters, Massimo removed the Guzzi’s lower frame rails, then fabricated new attachment points to hang its V-twin mill from. The engine now sits a little higher and at a sharper angle, which has left space to sharpen up the steering angle too. Tucked away between everything is a CNC-machined chassis brace.

The front forks come from a Yamaha R6. They’ve been shortened and rebuilt, and the lowers have been cleaned up and kitted with custom brake mounts to hold a pair of Brembo calipers. Massimo modified the stock Moto Guzzi yokes to hold the new forks, welded up the OEM riser holes and polished them. 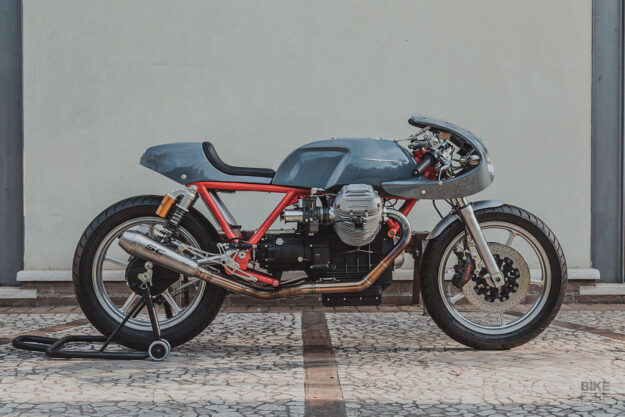 Out back is a custom swingarm, TIG-welded from aluminum rods and tubes. Hooked up to a pair of Öhlins shocks, it matches the stock bike’s geometry, and has been designed to plug straight into any Tonti frame. It also weighs just 2.25 kilos [4.96 lbs].

This café racer’s gorgeous five-spoke wheels also deserve special mention. Massimo’s been working on their design for quite some time, drawing on sage advice from Jonich Wheels’ Fabio Alberio, and the late Roberto Marchesini. Each wheel is machined from a solid aluminum plate, and, like the swingarm, will fit any Tonti-framed Guzzi. 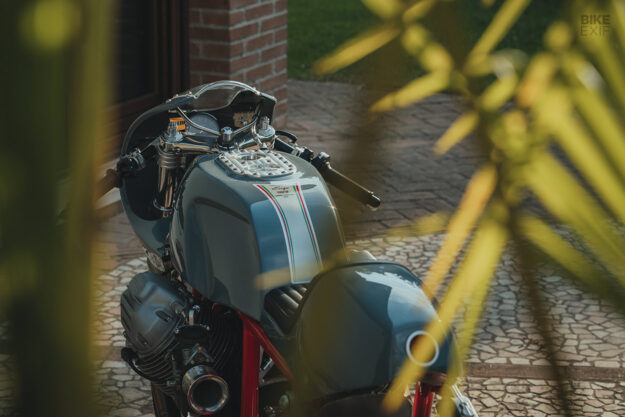 Naturally, all of the bodywork on this 1000 SP is custom too. Massimo shaped the fairing, fuel tank and tail section out of aluminum, along with a neat oil vapor recovery tank that doubles up as a rear inner fender. Even the windshield is bespoke; it’s made from thermoformed plexiglass. 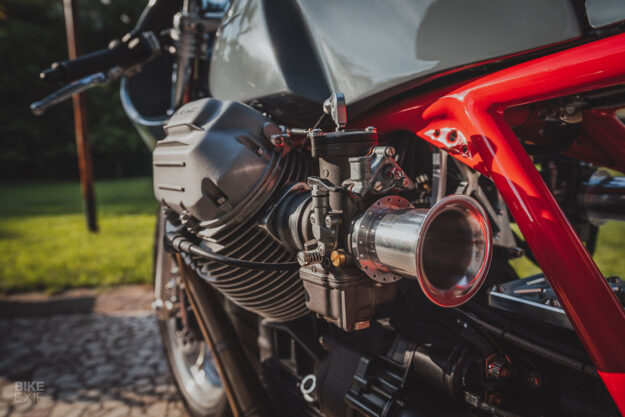 The engine hasn’t gone untouched either. It’s sporting a lightened flywheel and crankshaft, a new camshaft, and some deft head- and valve-work. The ignition has been replaced by a modern Silent Hektik system, and the clutch has been converted to hydraulic by way of an Oberon actuator and some clever engine casing mods.

The intakes are hooked up to a pair of 40 mm Dell’Orto PHM carbs, fed by velocity stacks. Gasses exit via a custom stainless steel exhaust system, pieced together with parts supplied by SC Project. 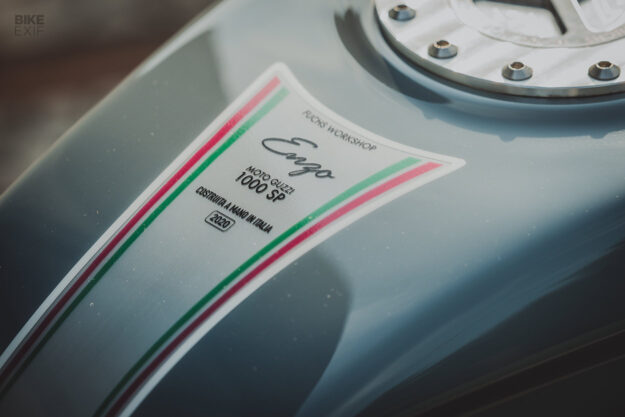 Clocking in at an impressive 155 kilos [342 lbs] dry, this Moto Guzzi speaks volumes about Fuchs Workshop’s capabilities, while its subtle livery pays testament to just how sharp Massimo’s eye is. With the bodywork finished in a warm grey, and the frame in a vivid red, it’s both striking and classy.

Massimo has nicknamed the bike ‘Enzo’ after his grandfather, who he credits for sparking his interest in machines. That inspiration also offers a clue as to why he’s gone so deep on this build. 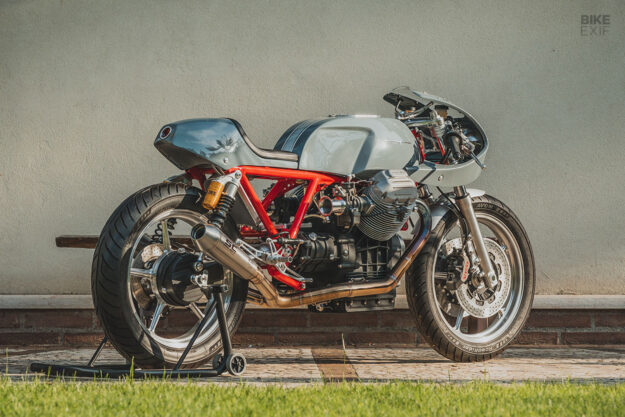 “He was an excellent carpenter,” says Massimo, “and he taught me the importance of taking care of the details—even with jobs that seem simple.”

Massimo would like to thank Claudio Lanconelli at Lanko Tuning for his help with the chassis and general tuning, Max Ferrari at SC Project, Maurizio Piacenti at Maury’s Painting for the paintwork, and Workshop 09 for machining the wheels. 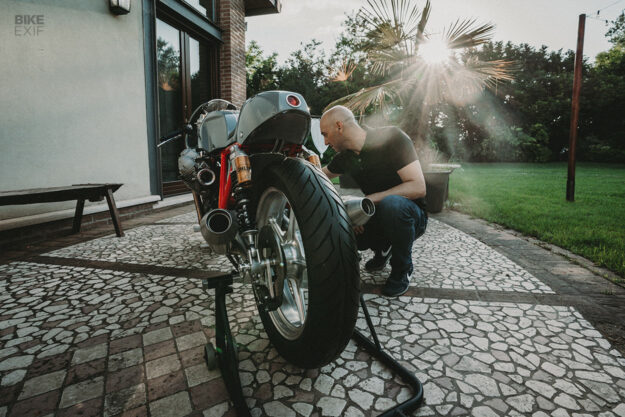