In an era where everyone seems to be chasing their own tiny slice of internet fame, it’s refreshing to find someone that actively pursues anonymity. Allow us to introduce Sally (not his real name). His web presence is little more than scant website and an Instagram account with a handful of posts—but his work speaks volumes.

This svelte café racer is the latest machine to roll out of Sally’s workshop in British Columbia, Canada, called simply Sally’s Speed-Shop. And if you can’t quite place the donor bike, it’s because there isn’t just one. Break it down, and you’ll find an electric motor, homemade batteries, composite bodywork, and a handful of scalped Honda and Suzuki parts. 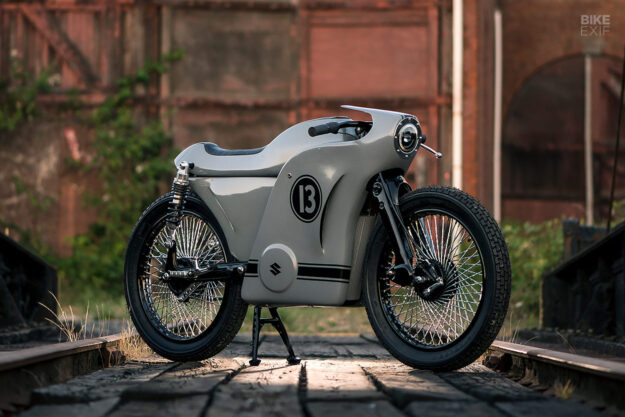 Sally’s Speed-Shop isn’t just a motorcycle workshop. Sally also creates art, furniture and surfboards, so his skillset is broad and his tastes are eclectic. This project started out like most do—with a basic concept that sounded cool, but needed to be fleshed out.

“The idea was simply to make a vintage-inspired electric race bike,” Sally explains. “It started with a full size drawing on the wall, then I made molds for the bodywork. I basically built it from the outside in.” 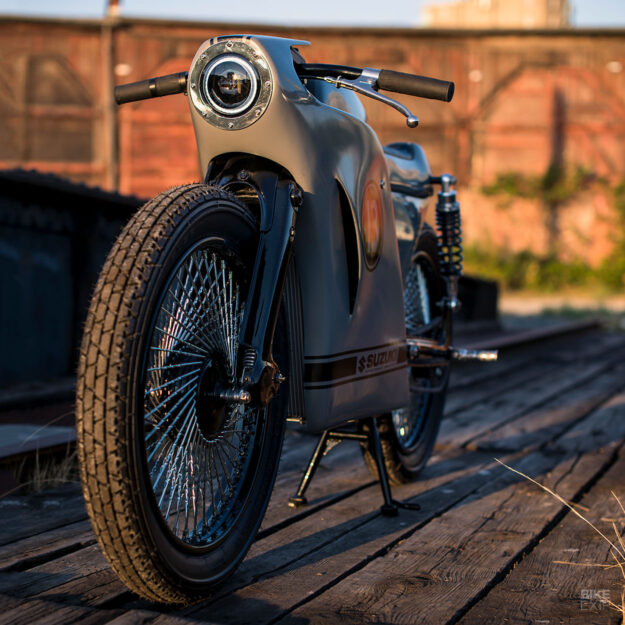 Inspiration for this electric café racer’s design came from all over. Sally references everything from the iconic Honda CB200, to 60s era fighter jets; it’s a mash-up that sounds like it shouldn’t work, but it does.

Working from the molds he’d built, Sally shaped each part using a mix of carbon and glass fibers with epoxy. The bike wears a full-sized fairing with generous air intakes, a monocoque-style ‘tank’ and tail unit, and side covers that hide the bike’s inner workings. The only visible bit of metal is the custom-made ring that holds the headlight in place. 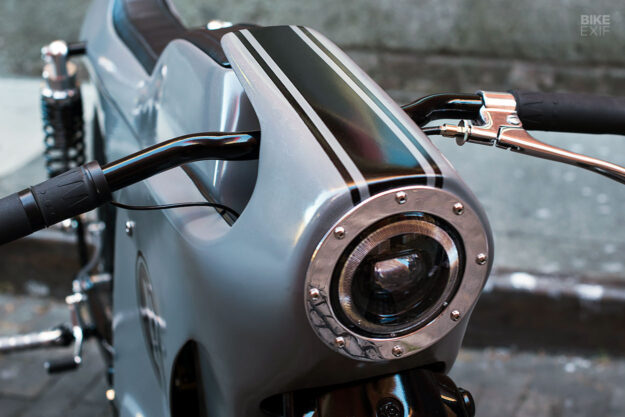 The aero influence is clear in the way the fairing tapers towards front, while a vintage Honda vibe comes through in the upholstery. The leatherwork was handled deftly by Randi Obenauer.

But the real genius here, is how misleading the design is—blink, and you’ll mistake it for a petrol-powered bike. There’s even a little bulge on the right side of the fairing, that looks like it was put there to make room for a ‘regular’ engine.

There are a couple of Suzuki logos to throw you off the scent too, but they do have some meaning. Sally used the pressed steel frame and swingarm from a 1968 Suzuki B100 as the basis for his creation’s rolling chassis. The front forks are from a vintage Honda Cub, but they’ve been shortened.

A set of adjustable nitrogen-filled billet aluminum shocks prop up the rear. The wheels are custom-built units, featuring Honda CD125 hubs, 18” rims and twisted spokes. Sally added the CD125’s brakes too, but upgraded them with carbon-kevlar shoes. 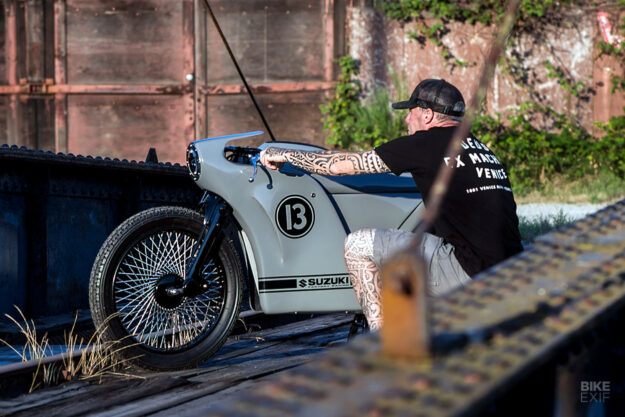 As for propulsion, that’s courtesy of an 18,000 W air-cooled electric motor, operated via a Bluetooth controller and hooked up to a traditional chain drive. Sally sourced the motor and controller separately, then built his own Lithium-ion battery packs. Everything’s hidden inside the body, with not a single wire to give this café racer’s secret away.

Even the controls maintain the illusion of a petrol-powered bike. The back brake’s operated via foot lever, as per the norm, but the front brake lever sits on the left side of the handlebars. So it simply gives the impression that this bike has a clutch (but no front brake).

Sally’s electric café racer is not only visually cunning, but remarkably well-proportioned too. Finished in a tasteful monochrome livery with minimal graphics, it cuts a perfect vintage figure.

Sally has benchmarked its performance too, and it’s shockingly quick for a bike with skinny tires and drum brakes. “The motor ended up having 200 Nm peak torque,” he tells us, “and it has reached 110 mph in testing. Range wouldn’t be much, as it’s made for speed, not range.”

The best part? No-one will hear you coming. 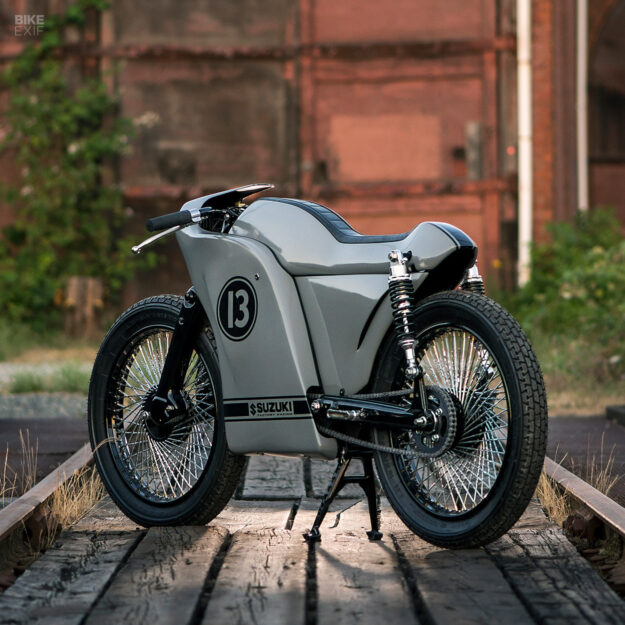