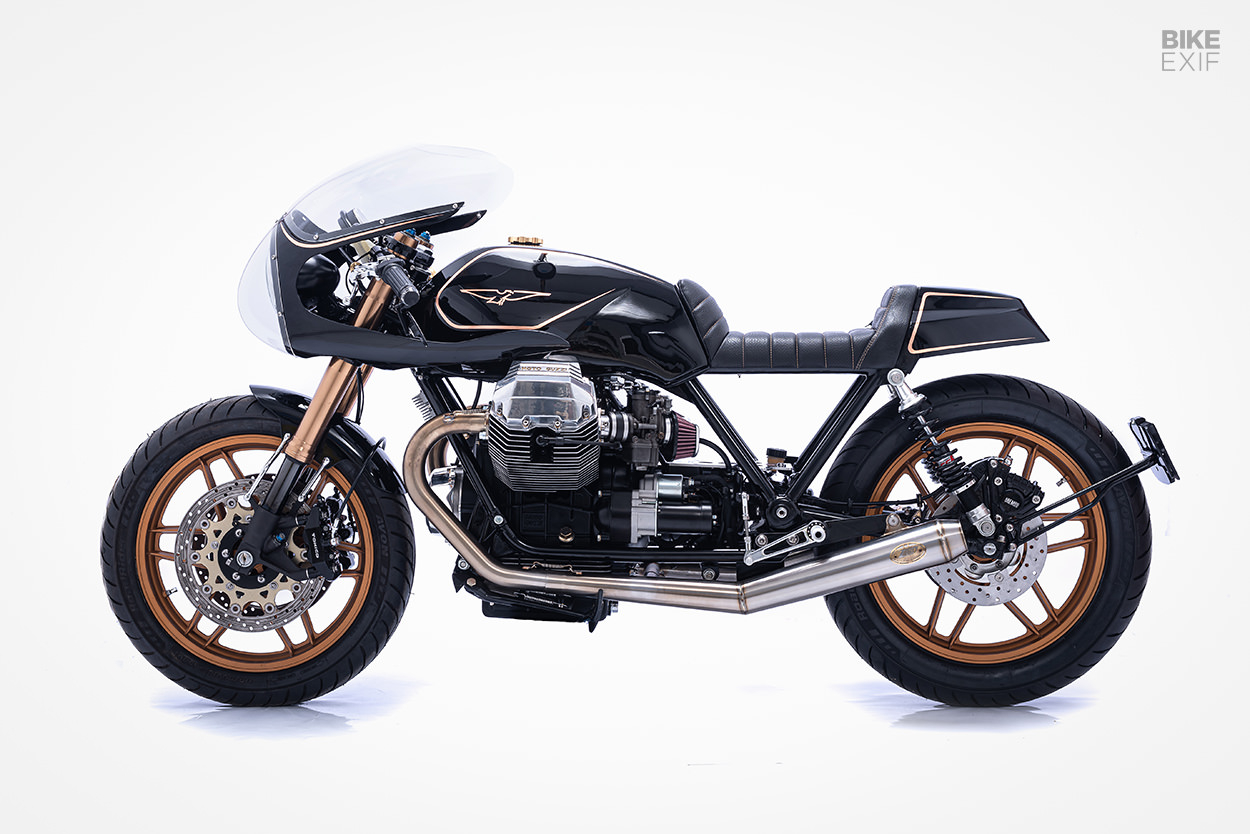 The custom scene has evolved in myriad ways since we first launched Bike EXIF, but we’re still suckers for motorcycles that play on classic themes. This quintessential café racer from Rusty Wrench Motorcycles ticks all the right boxes, with clean lines, subtle upgrades and an immaculate livery. Remarkable, when you consider that it started out as a busted up 1987 Moto Guzzi Mille GT.

And that’s putting it mildly, by the way. The Mille rolled into Rusty Wrench’s workshop in proper barn find condition; its frame was bent, half its seat was missing and it was buried under dust. So the Portuguese crew truly performed a miracle to get it looking this tight. 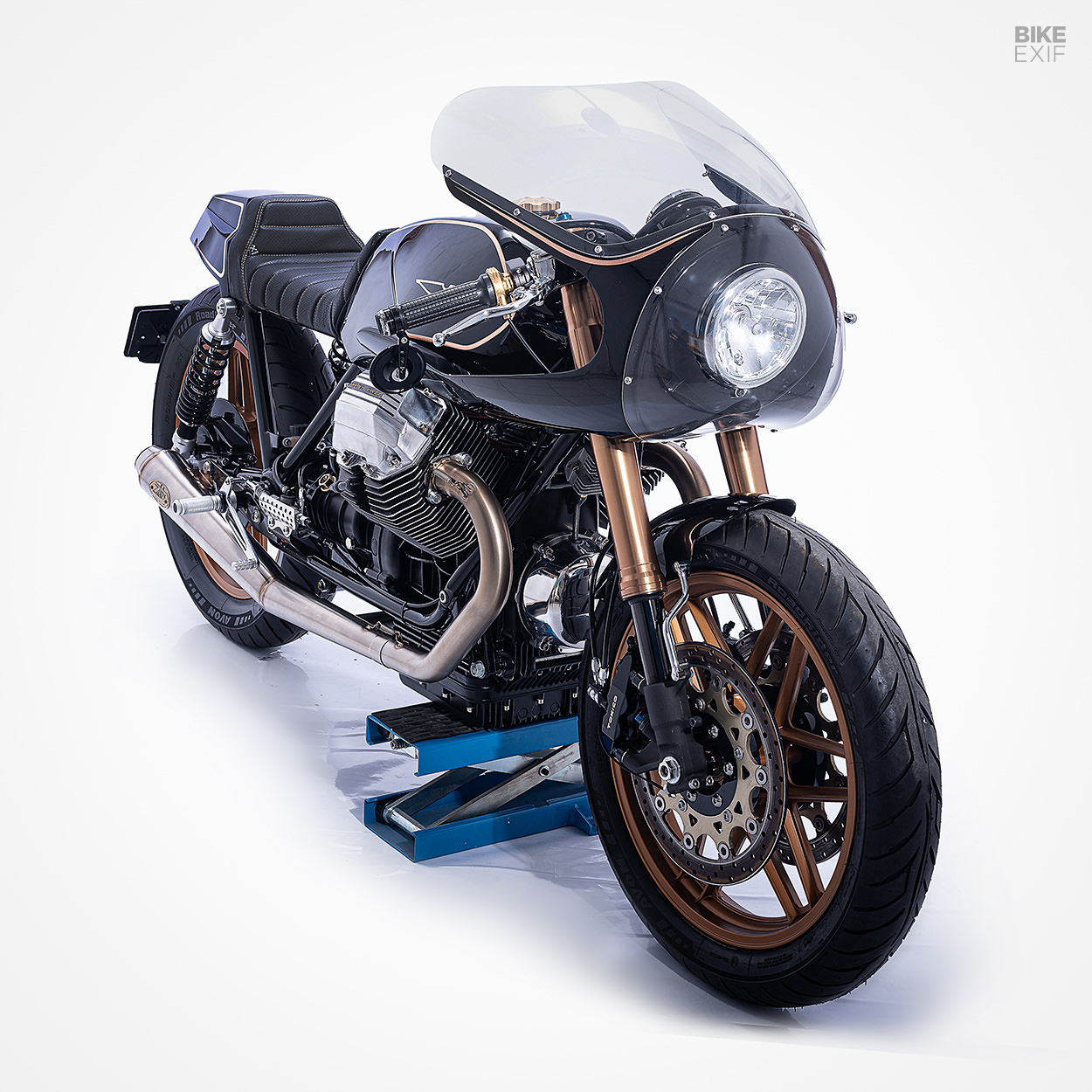 For starters, some key parts were so damaged that they had to be scrapped entirely—most notably, the frame. Rusty Wrench transplanted the motor into an older Le Mans Mark III frame, then modified the subframe to suit their concept.

Next, the team rebuilt the Guzzi Mille’s worn-out motor. It looks factory fresh now with a delightful combination of black and polished finishes. The original Dell’Orto carbs run with DNA filters, and the exhaust system is from the Italian specialists Zard. 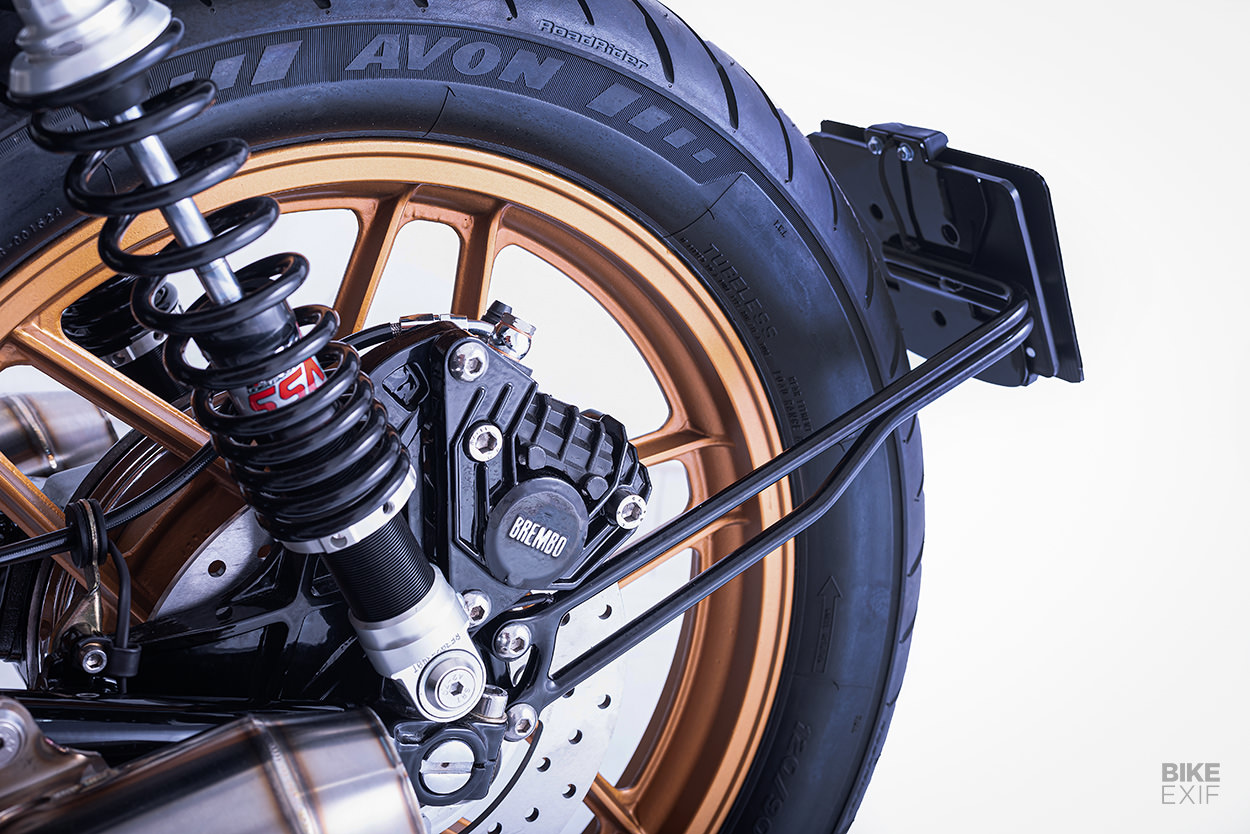 This Mille GT still wears its original wheels—resplendent in a gold powder coated finish and wrapped in modern Avon rubber. But its suspension is all-new, with a set of upside-down Suzuki GSX-R forks doing duty up front and YSS shocks out back. The forks are held in place by custom yokes, and feature a black diamond-like coating on the lowers.

The forks’ original fender mounts have been repurposed to hold a custom-made fender and struts. A pair of Tokico calipers lifted from a Yamaha R1 give the old Guzzi substantially more stopping power than it had in the 80s. 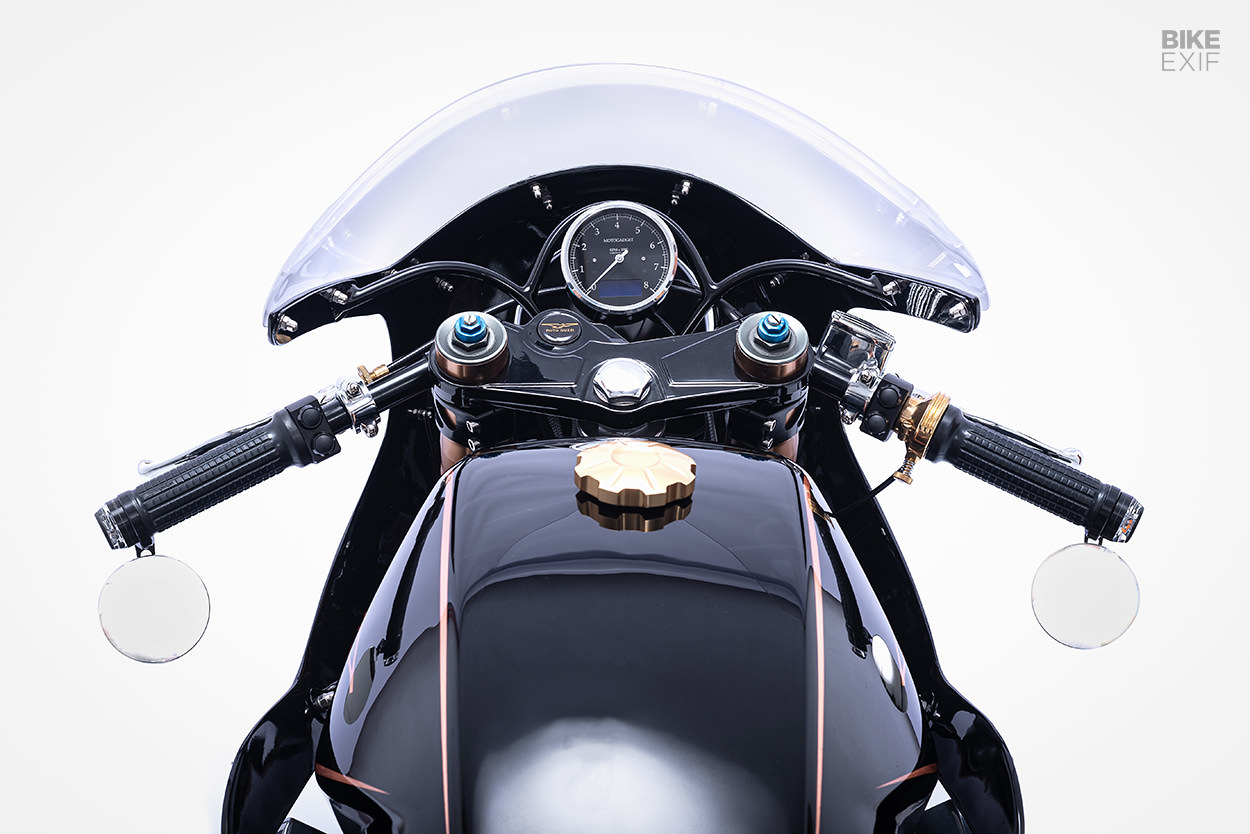 Higher up is a classic race-style fairing, mounted to an elegant hand-made system of brackets. Sitting dead center behind it is a handsome analog speedo from Motogadget, flanked by a Moto Guzzi-branded Motogadget RFID touch point for the keyless ignition system.

The switches, grips, and bar-end turn signals and mirrors are also from the German electronics company, as is the Bluetooth-enable mo.unit control unit that the whole bike’s been rewired around. The throttle and levers are Kustom Tech parts. 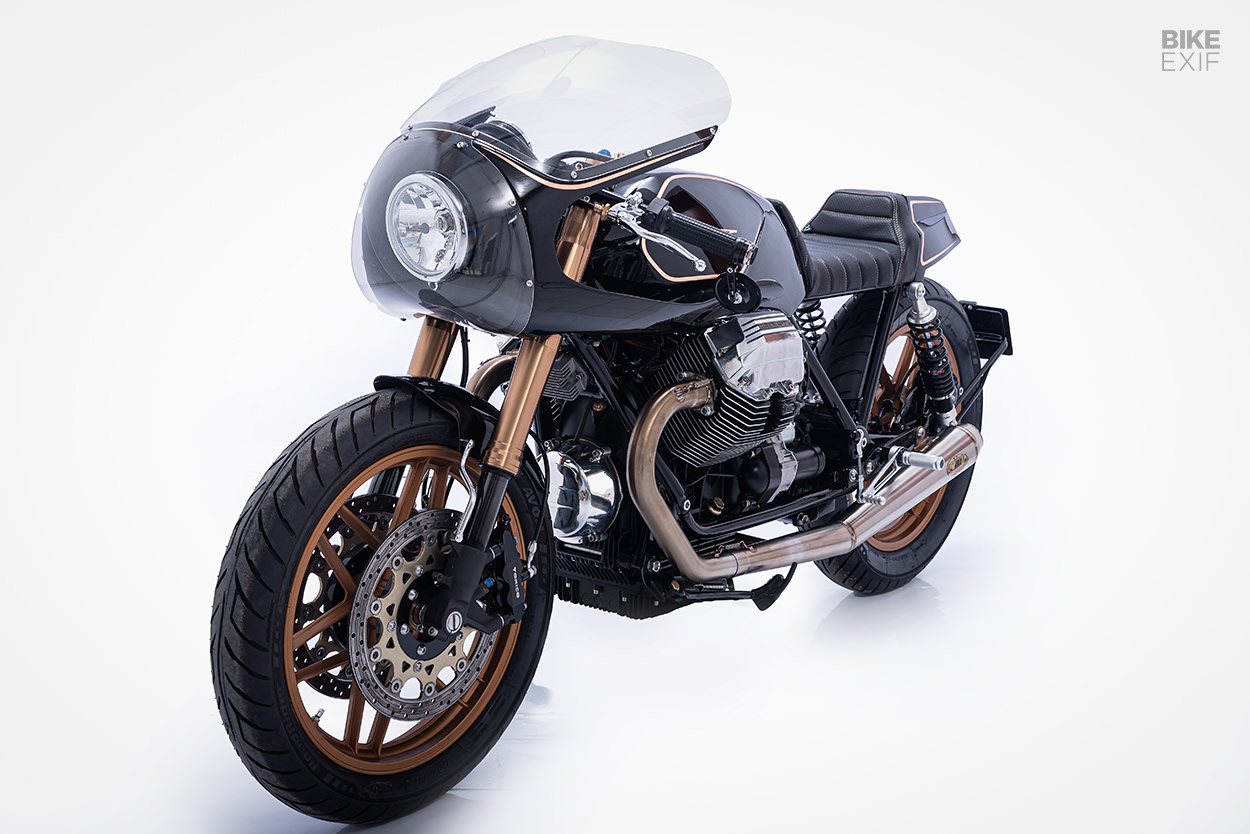 Another original part that managed to survive was the Mille GT’s fuel tank. Rusty Wrench adapted it to the Le Mans frame, then modified it slightly to suit the lines they were going for. It looks right at home here, and is equipped with a new filler cap.

The bodywork’s capped off with a hand-shaped aluminum tail cowl. The taillight’s mounted into a neat recess out back, while the license plate lives on a swingarm-mounted bracket further down. 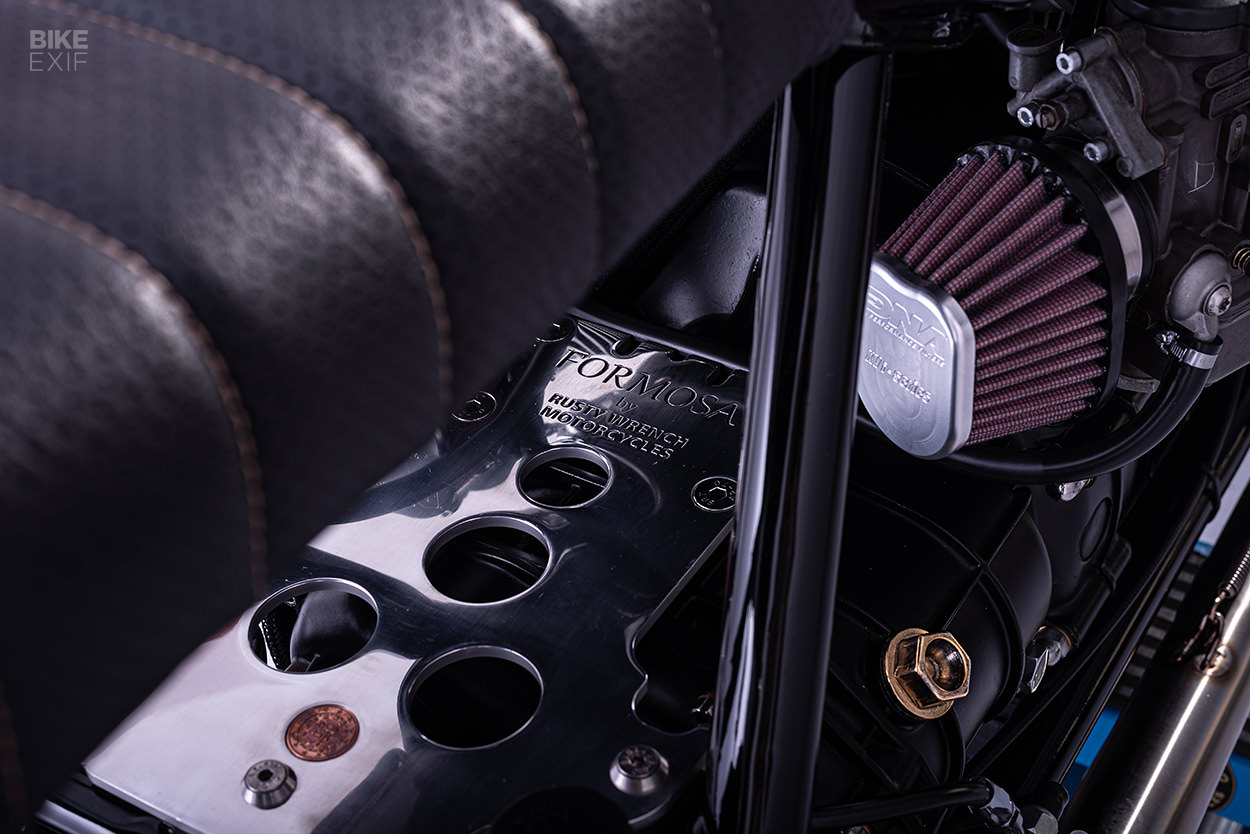 Rusty Wrench designed the seat pan to be invisible, giving the seat the impression of floating between the tank and tail. Perforated leather and contrast stitching add another charming touch. Other upgrades include new rear-sets, and a custom-made reinforcement plate tucked between the frame rails behind the engine.

But this Mille’s best attribute is its incredibly tasteful paint job. From the piano black base, to the classic Guzzi eagle and copper leaf striping, it’s flawless. Take a gander at the engine, and you’ll even notice that the fasteners are a mix of stainless steel and brass parts. 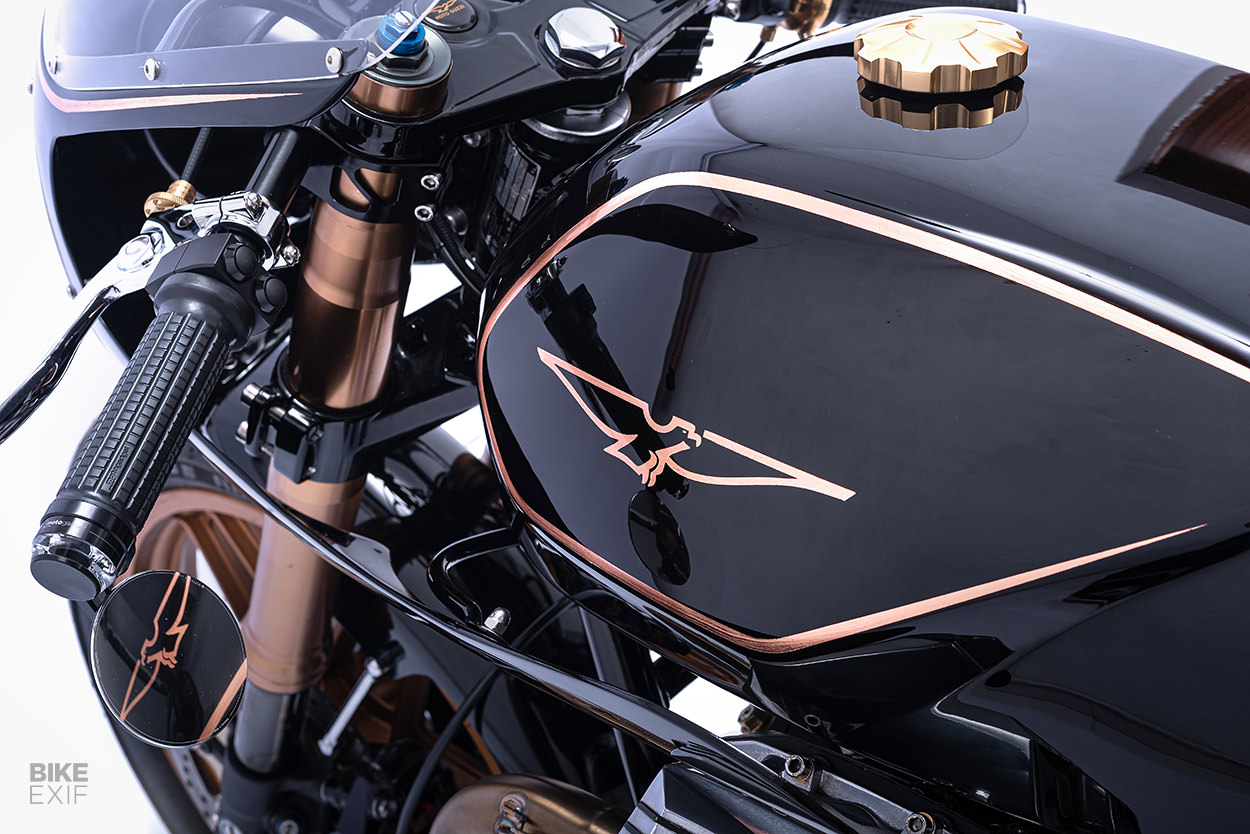 The final result is a far cry from the dirt-encrusted donor that first rolled into the Rusty Wrench garage. So the crew has named it ‘Formosa,’ after the picturesque Ria Formosa lagoon near their home base in Faro.

It’s a fitting tribute to the region—and to this resurrected Italian classic. 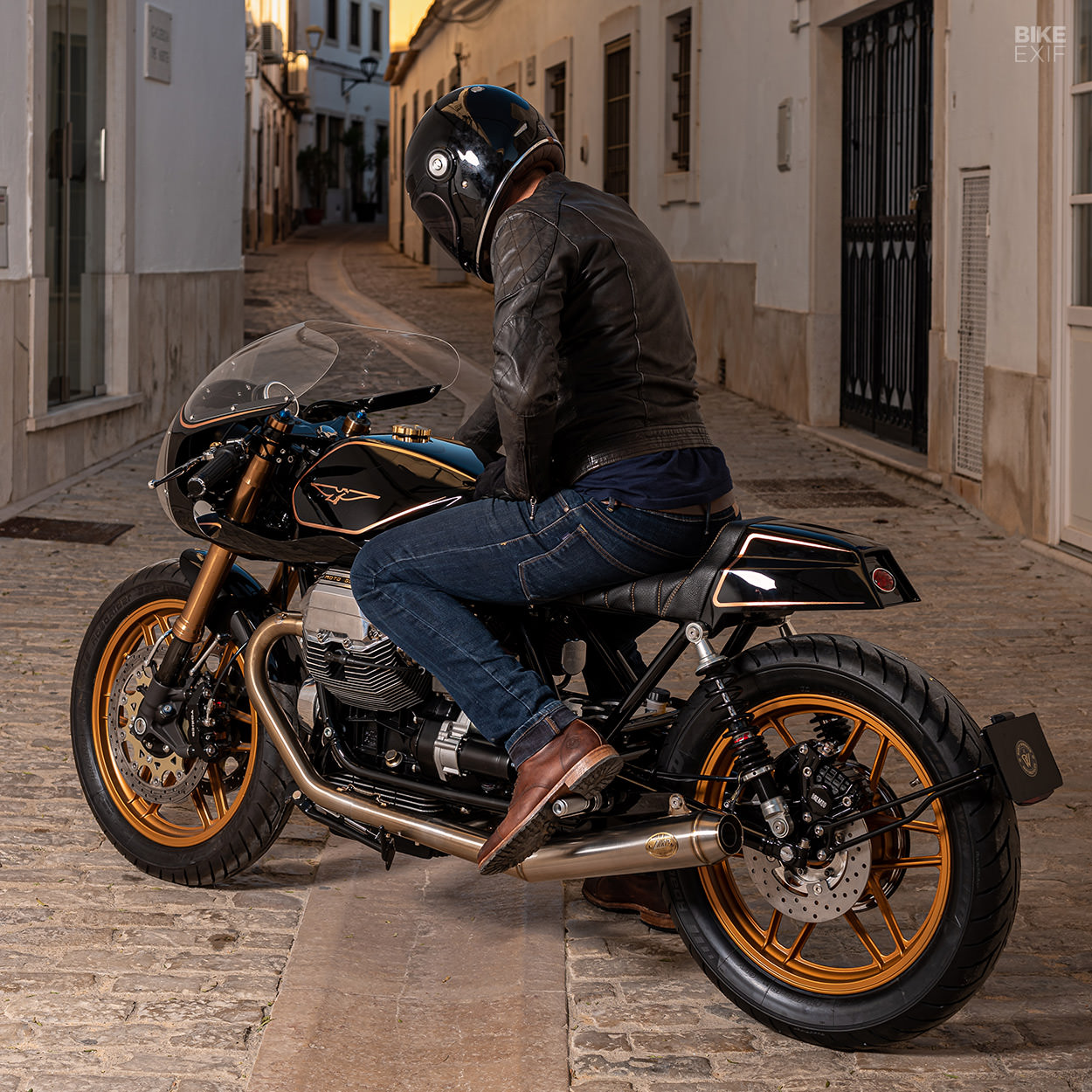