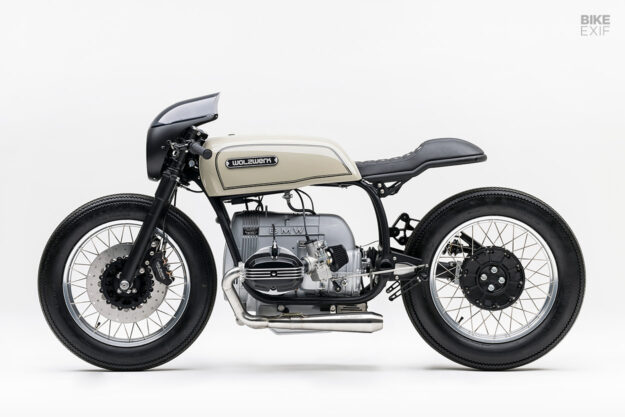 Turning motorcycle customization into a sustainable business is hard enough, but Marcus Walz has taken it to another level. His company, WalzWerk, has been in business for 32 years—and in that time, they’ve built no less than 1,000 custom motorcycles. You read right: one thousand.

Marcus is sure of that number, because WalzWerk is registered as a motorcycle manufacturer in Germany—and that means they have to record every single bike they build. “We knew exactly when we would build our 1,000th bike,” Marcus tells us. “And we’re talking about fully, built-from-the-ground-up bikes—not just slightly modified or customized bikes.” 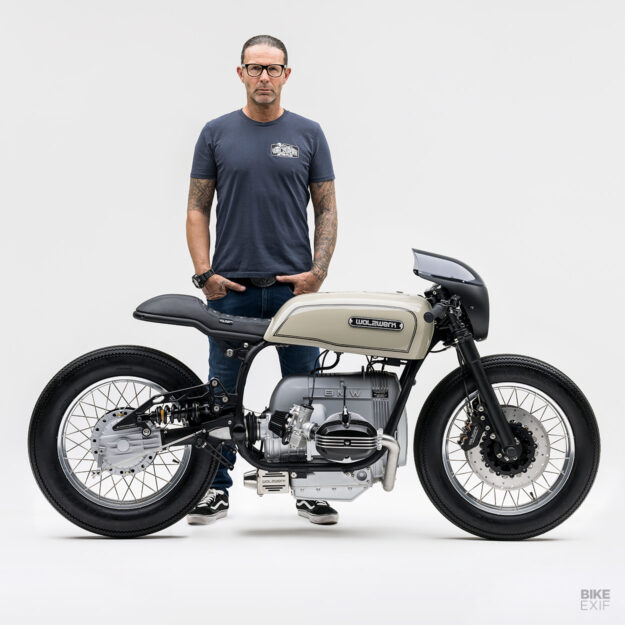 WalzWerk’s first twenty years was mostly spent building a handful of custom Harleys a year. But they gained traction fast when they started customizing old BMW boxers. Right now they average around 100 builds a year—and 80 of those are airheads.

Most orders are for WalzWerk’s signature ‘Schizzo’ BMW café racer builds, so Marcus picked that as the inspiration for the shop’s 1,000th project. His starting point was a 1990-model BMW R100RS, which he discovered was manufactured within a month of when WalzWerk was established. 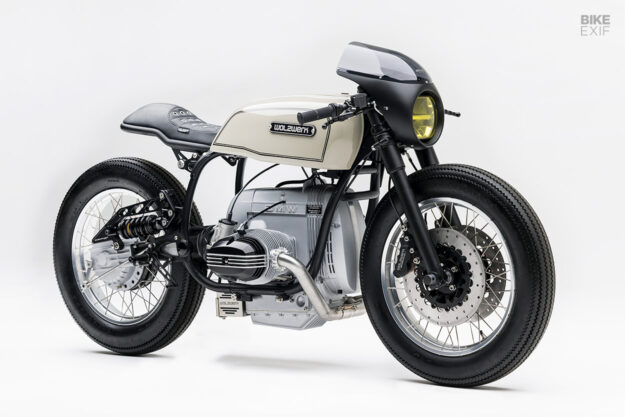 The project kicked off with a full tear down of the donor bike. The frame was sand-blasted before the WalzWerk team de-tabbed it, and re-welded all the key structural welds to make it stiffer and stronger.

Next, they tore into the motor and transmission with a full rebuild of both. The kept the engine capacity at 1,000 cc, but modified the crank, heads, ports and valves extensively. Along with a racing cam, adjustable electronic ignition and a pair of Dell’Orto carbs, the engine now kicks out around 85 hp. 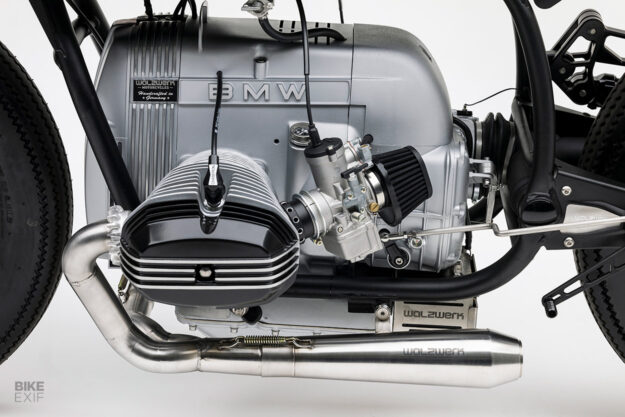 The outside of the motor looks exquisite. WalzWerk bead-blasted and clear-coated it, then finished the valve covers in black with contrasting stripes. Most of the wiring now sits inside a neat cover, sitting where the airbox usually would.

You’ll find the battery lower down, tucked in a small box underneath the transmission. A custom two-into-one stainless steel exhaust system flanks it. 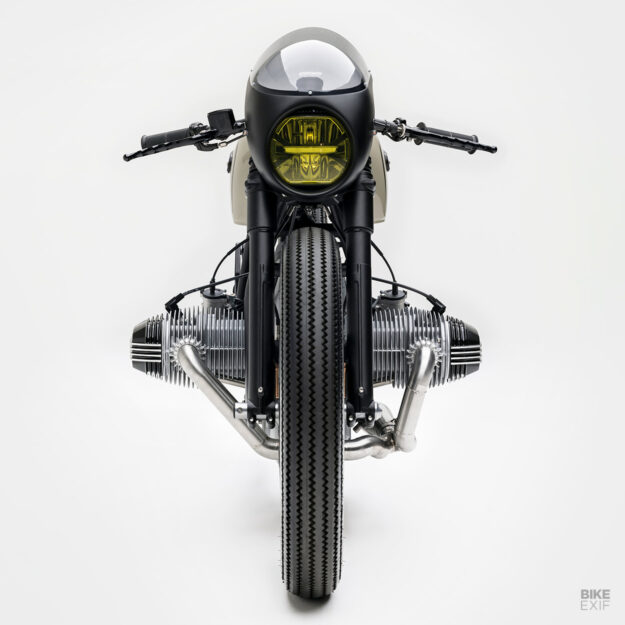 Moving to the suspension, WalzWerk kept the BMW’s conventional front forks—but threw in a few neat upgrades. They lowered them by about 5”, and boosted them with new internals and progressive springs. The lower legs were shaved down and powder coated black, with a set of custom tubes added up top for a burlier look.

It’s a much different story out back though. The rear suspension’s been swapped out for a ‘Sidewinder’ kit—a special BMW R-series-specific setup, developed by the Dutch distributor of YSS Suspension, Suspension Store. If it looks familiar, it’s because it’s similar to the kits that often show up on BMW K-series builds. 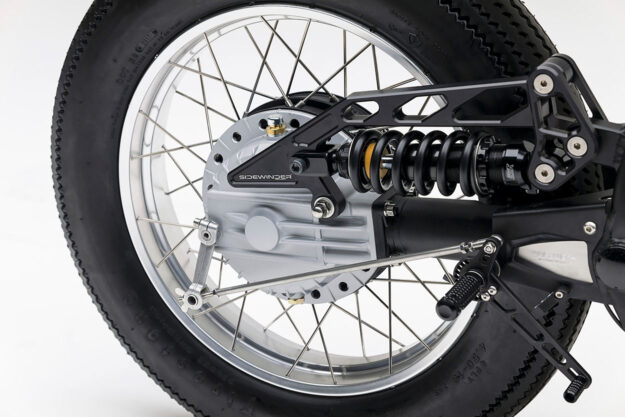 All the parts on it are CNC-machined from high grade aluminum, and assembled around a custom-built YSS shock. “I got the very first kit for this special bike,” says Marcus. “Up to today, this is still the first and only bike worldwide with this kit installed.”

The bike rolls on WalzWerk’s proprietary 18” tubeless spoked wheels, built with black hubs, brushed rims and stainless steel spokes. The Firestone tires were an aesthetic choice, but don’t fret—there’s a spare set of wheels fitted with Continental RoadAttack rubber. So if you plan to carve canyons with this BMW, you’re all set. 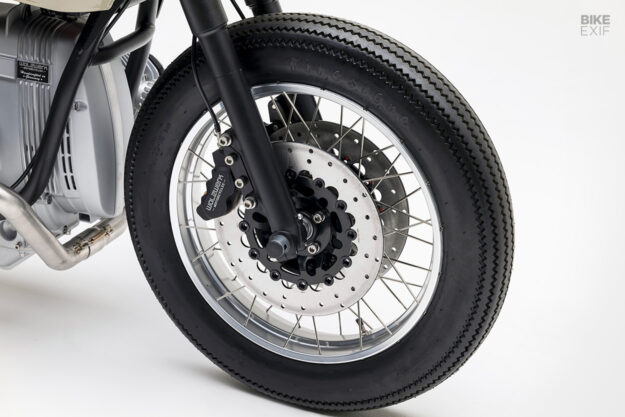 The twin front brake calipers and discs are also from WalzWerk’s stock, and are hooked up to Wunderkind brake lines. The rear wheel still uses a drum brake, but the crew drilled out the hub’s outer rim to aid in cooling. A set of WalzWerk’s own rear-set foot controls are in play too.

Up front are new CNC-machined yokes, engraved with the same words that Marcus has tattooed on his fingers: “SELF MADE.” The cockpit also features clip-ons, KustomTech levers, integrated push buttons and Daytona grips. A Motogadget speedo is tucked in behind a modified Harley-Davidson fairing, which houses an LED headlight and a pair of tiny turn signals. 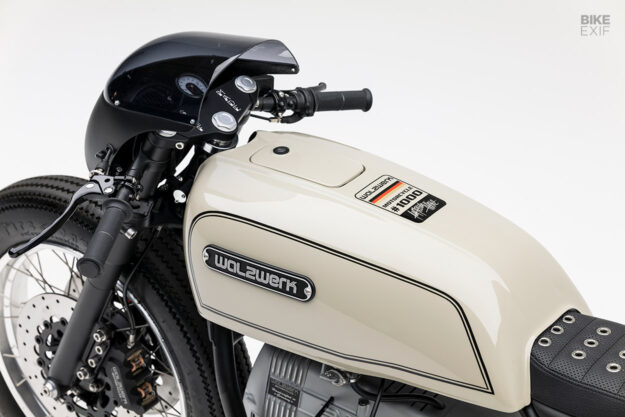 It’s finished in a stunning Porsche color from the 60s that matches one of WalzWerk’s own custom Porsches. (Yes, they build custom Porsches too.) CNC-machined tank badges adorn the sides, with a special commemorative motif on top. 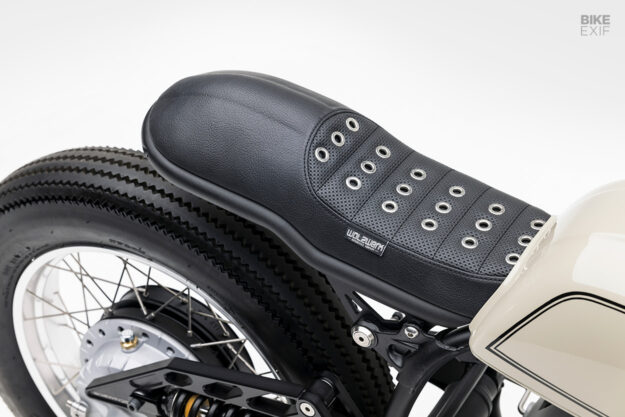 Finishing things off are a bolt-on WalzWerk subframe and one of their signature ‘GT’ seats; a design that’s inspired by old Ford GT40 race seats. The rear of the frame features embedded LED taillights that double up as turn signals. Blink, and you’ll miss ’em.

From its stance to its tasteful finishes, WalzWerk #1000 is flawless, and a testament to the shop’s pedigree. It’s svelte too, with a 168 kilo [370 lbs] curb weight. 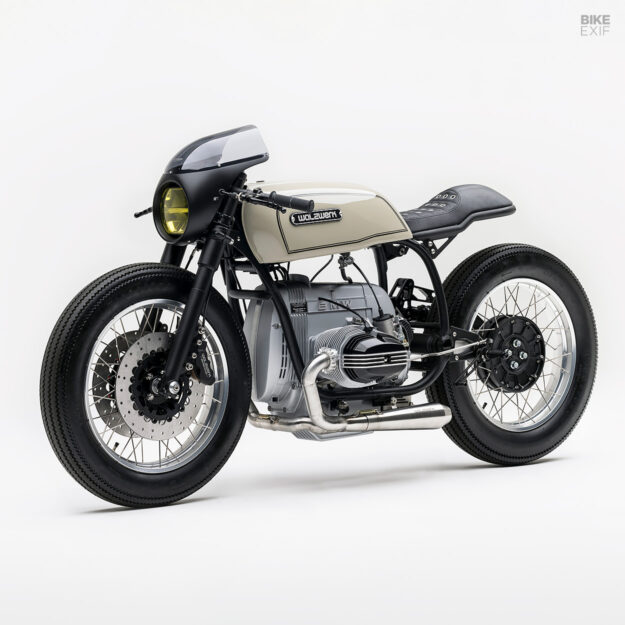 If you’d like your own piece of custom motorcycling history, Marcus and his team plan to build a limited run of 32 of these. Interested parties, please form an orderly queue. 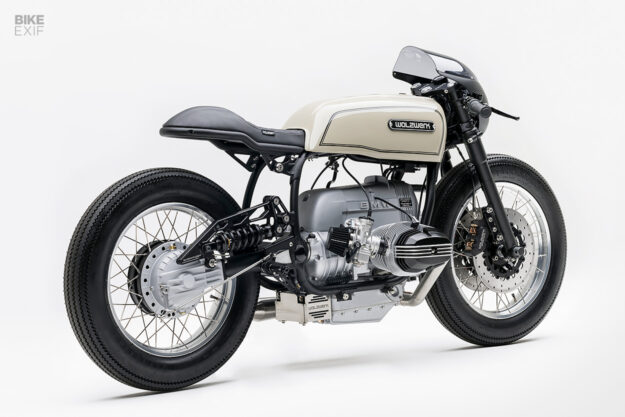