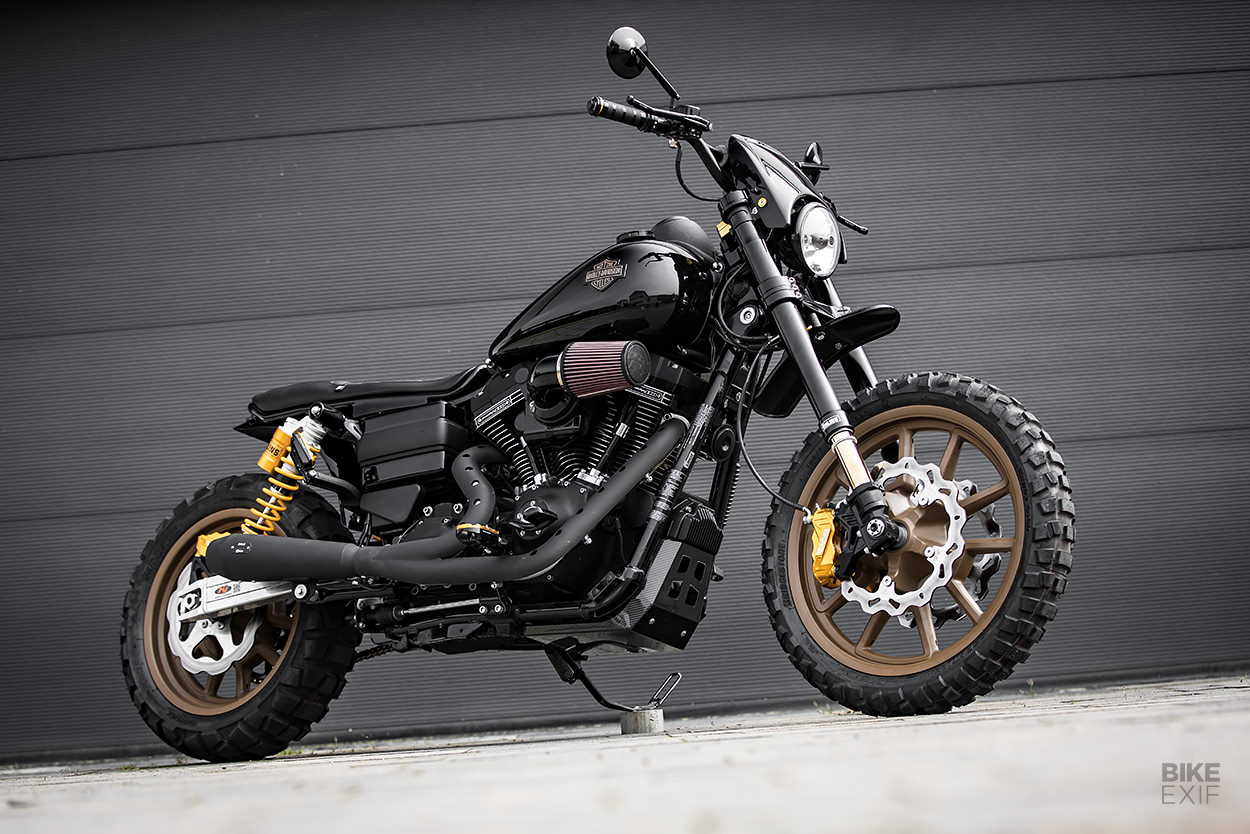 The 2016-model Dyna Low Rider S was the last hurrah for Harley-Davidson’s beloved Dyna. The Motor Co. was on the cusp of absorbing the Dyna range into their new Milwaukee-Eight Softail line, and had time to cram in one last variant. So they restyled the iconic Low Rider, bumped it from 103 to 110 ci, dropped in a hotter cam and tacked an ‘S’ onto the name.

The resulting bike was a total hoot to ride—noodley Dyna frame and all. And while the newer Softail Low Rider S is a rad bike in its own right, there’s still something special about the original Low Rider S that gets Dyna bros all hot under their Carhartt collars. 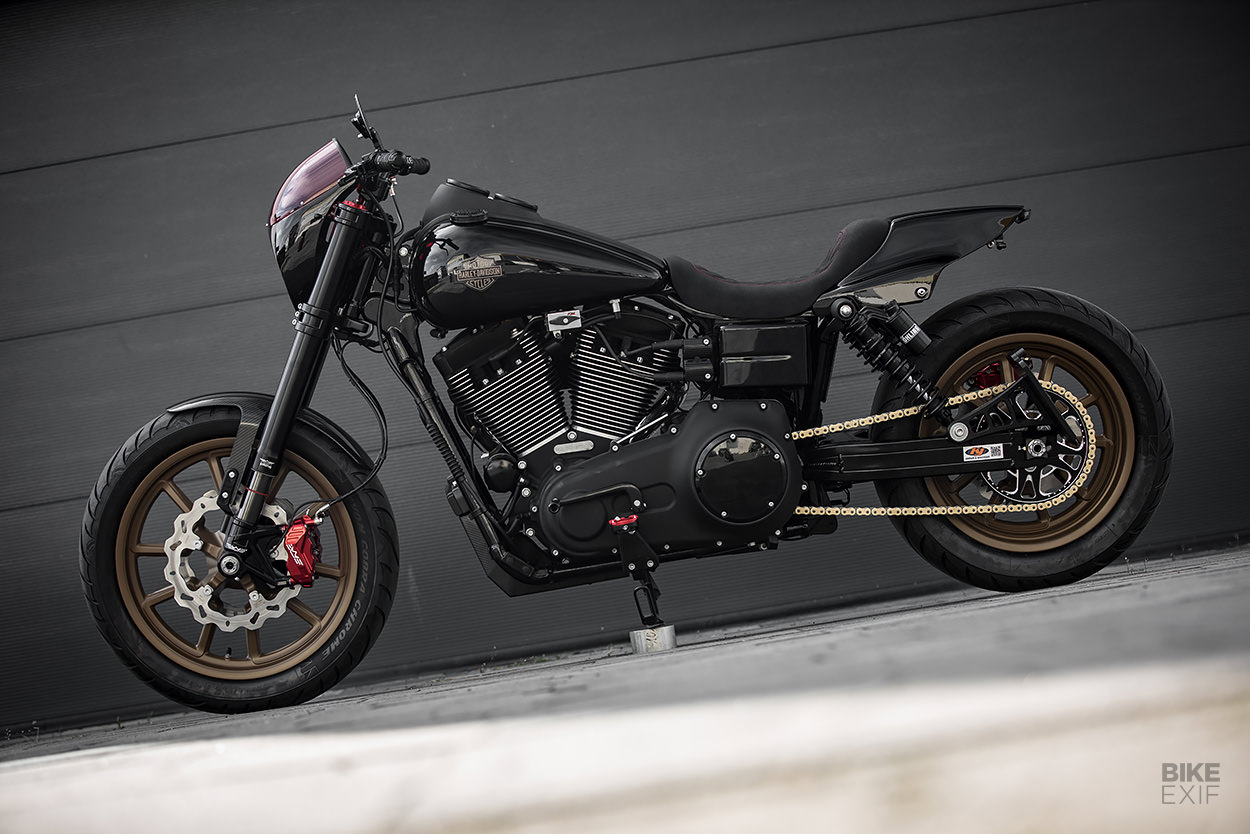 Most Low Rider S customs get the Californian ‘club style’ treatment, but these two tire shredders from MB Cycles in Heidelberg, Germany walk a different path. Dubbed ‘Cross’ [below left] and ‘Racer’ [below right] for obvious reasons, they feel like two sides of the same coin—but were actually built for two different customers.

Both bikes stand taller than the slammed bobbers and choppers we usually see from MB Cycles, and both feature an unconventional mash-up of styles. But that’s exactly what builder Martin Becker enjoyed so much about these projects. “It’s cool to mix different styles in a bike,” he says, “like a chopper with high performance parts.” 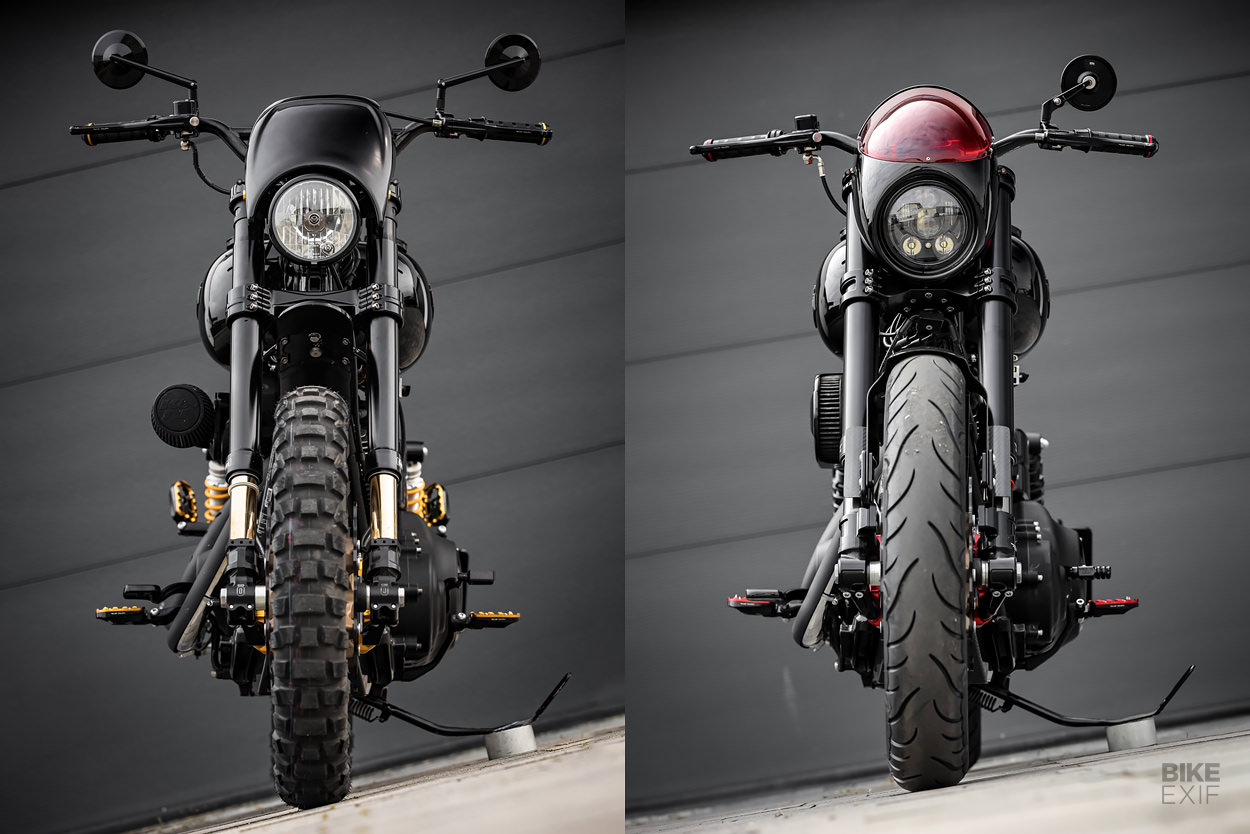 The Low Rider S Cross was the first of the two Harleys to go onto the bench. “My client knew he wanted a Harley, but didn’t know exactly what style,” says Martin. “He used to be a professional dirt bike rider, so I proposed the idea of making something with a bit of off-road character—and enough power to have fun.”

Martin sourced a suitable donor for the ‘scrambler‘ and got cracking. But a week into the project a different client walked in to collect his custom Harley Road King, and freaked out about the Low Rider S. Within three days he’d found his own donor bike and dropped it off at Martin’s workshop, with instructions to “build a cool racer.” 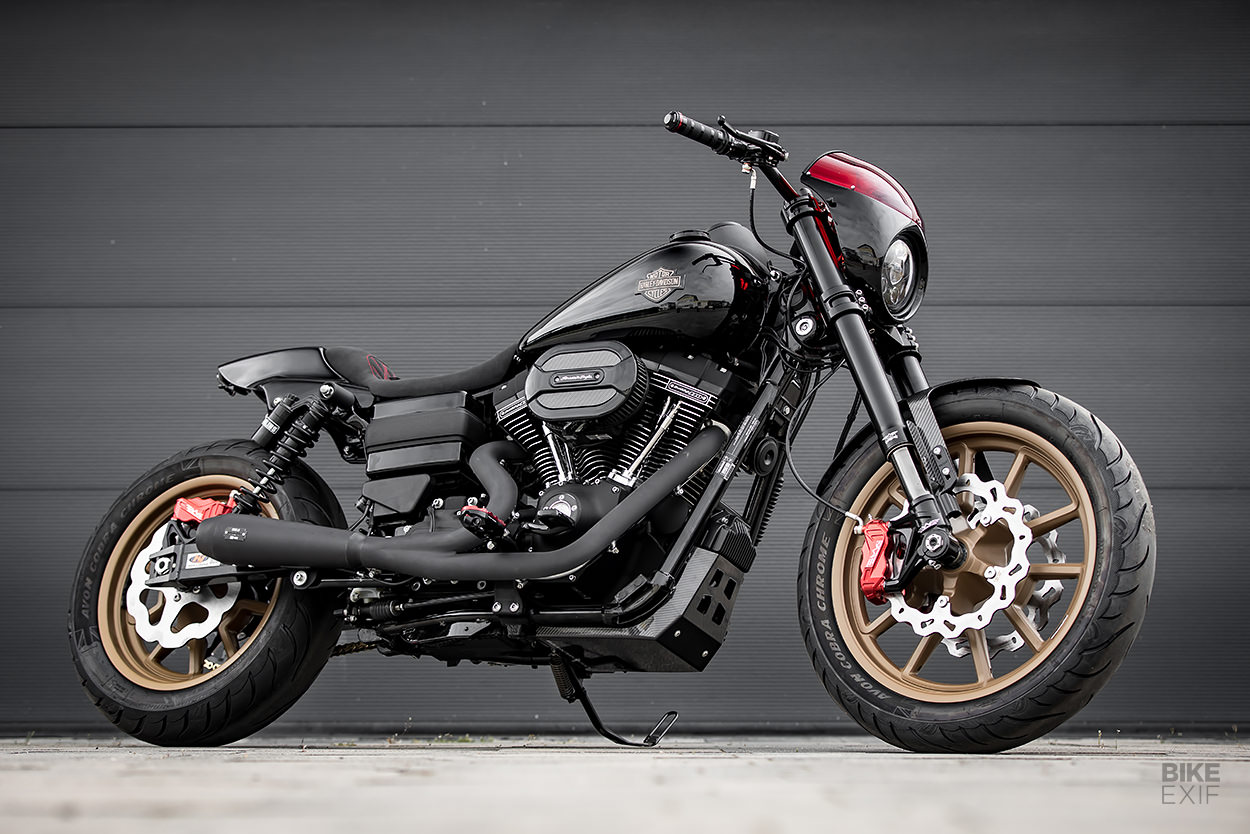 Building both bikes simultaneously meant that Martin could order all the parts he needed at once. And healthy budgets meant those parts could come from the very top of the top shelf. “It’s always cool to order stuff like this without caring about what it costs,” he quips.

As a result, the two builds share a number of key parts. Both wear complete front ends from Rebuffini; an Indianapolis Special setup with a Scott steering damper on the Cross, and a Nexo 4.0 system with Öhlins forks on the Racer. And both sport Öhlins shocks at the back, finished in gold and black respectively. 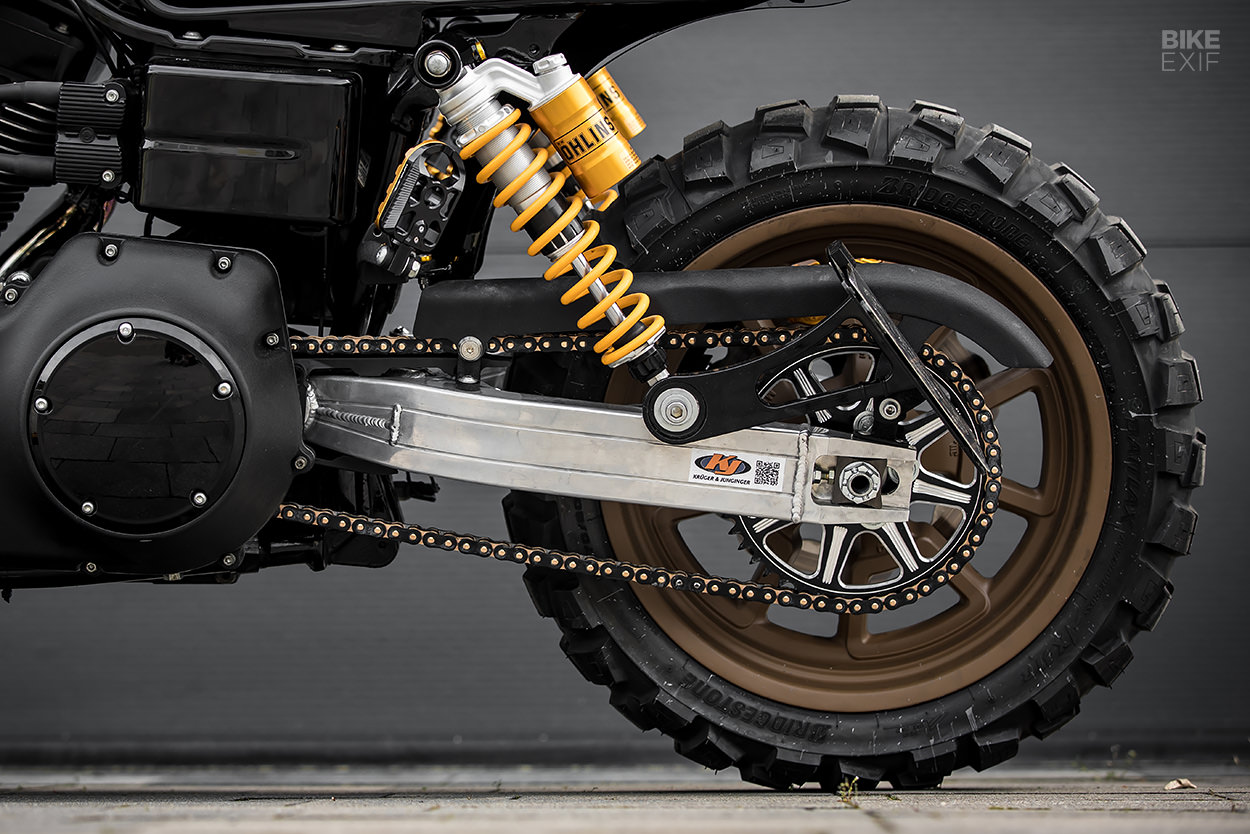 Martin also treated each Low Rider S to an extended swingarm from Krüger & Junginger in Germany. The bikes roll on their stock wheels, but there are plans to swap the Cross wheels out for a pair of spoked hoops from Kineo (they’re currently on backorder). The knobblies are Bridgestone AX41s, while the street tires are Avon Cobra Chromes. 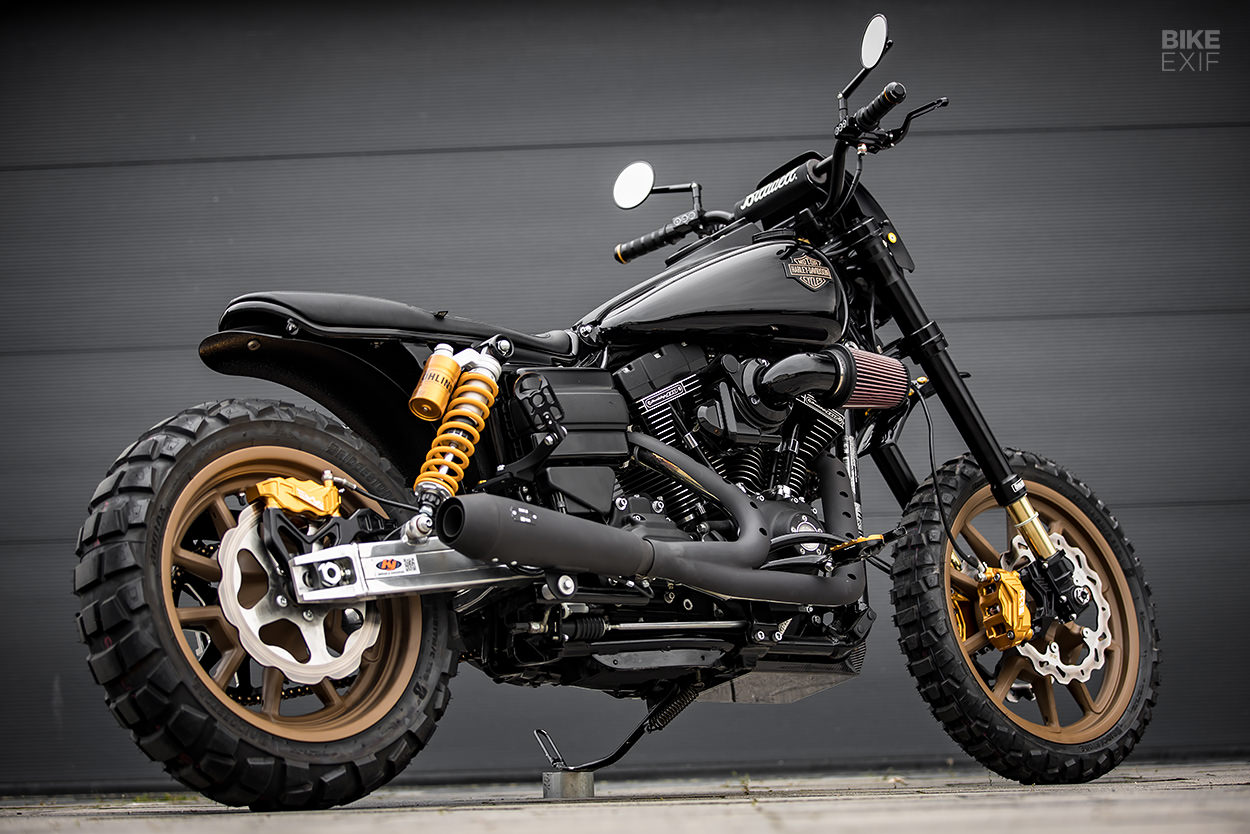 The stock bike’s 110 ci Twin Cam mill is plenty fun out the box, so Martin didn’t get too fancy there. He simply dropped an Andrews cam into each engine for good measure, and converted each bike’s final drive from a belt to a chain.

The two-into-one exhausts are from MCJ in Italy; both setups include a valve that can be opened or closed via a lever, to adjust the volume. The air cleaners are standard Screamin’ Eagle fare. 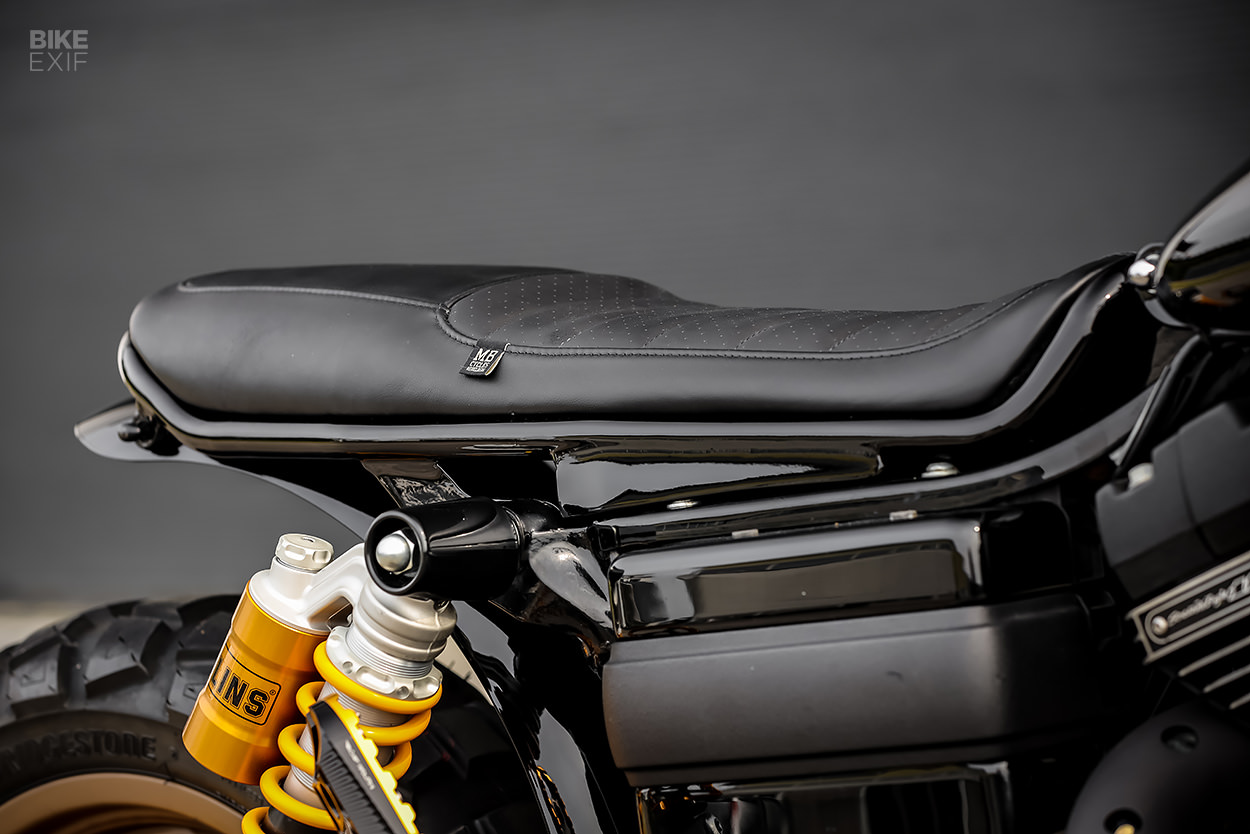 Moving to the chassis, Martin trimmed a little off the back of both bikes. But each has been dressed up differently.

The Cross bike features a custom subframe that cradles the custom two-up seat, ending in a tidy rear loop. There’s a custom fender out back, with a pair of integrated Kellermann LEDs acting as turn signals and taillights. A modified Cult Werk fender does duty up front, with an aftermarket fly screen mounted higher up. 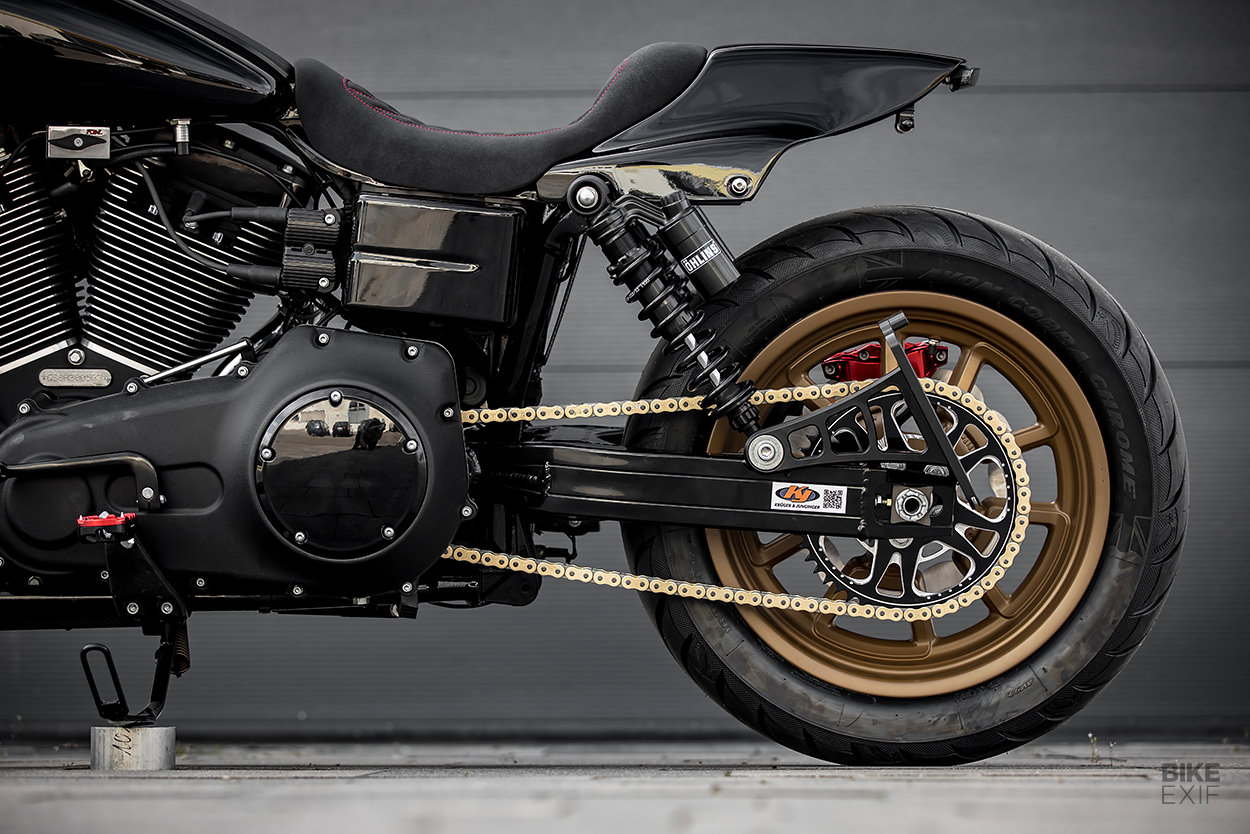 The Racer wears a tail section from R&R Customizing, styled after the classic Storz designs on vintage flat trackers. There’s an LED taillight out back, along with a pair of tiny LED turn signals from Kellermann.

Up front are a carbon fender and a carbon sump guard, both from Rebuffini. A Thunderbike fairing, modified with a red windshield, wraps around an upgraded LED headlight. 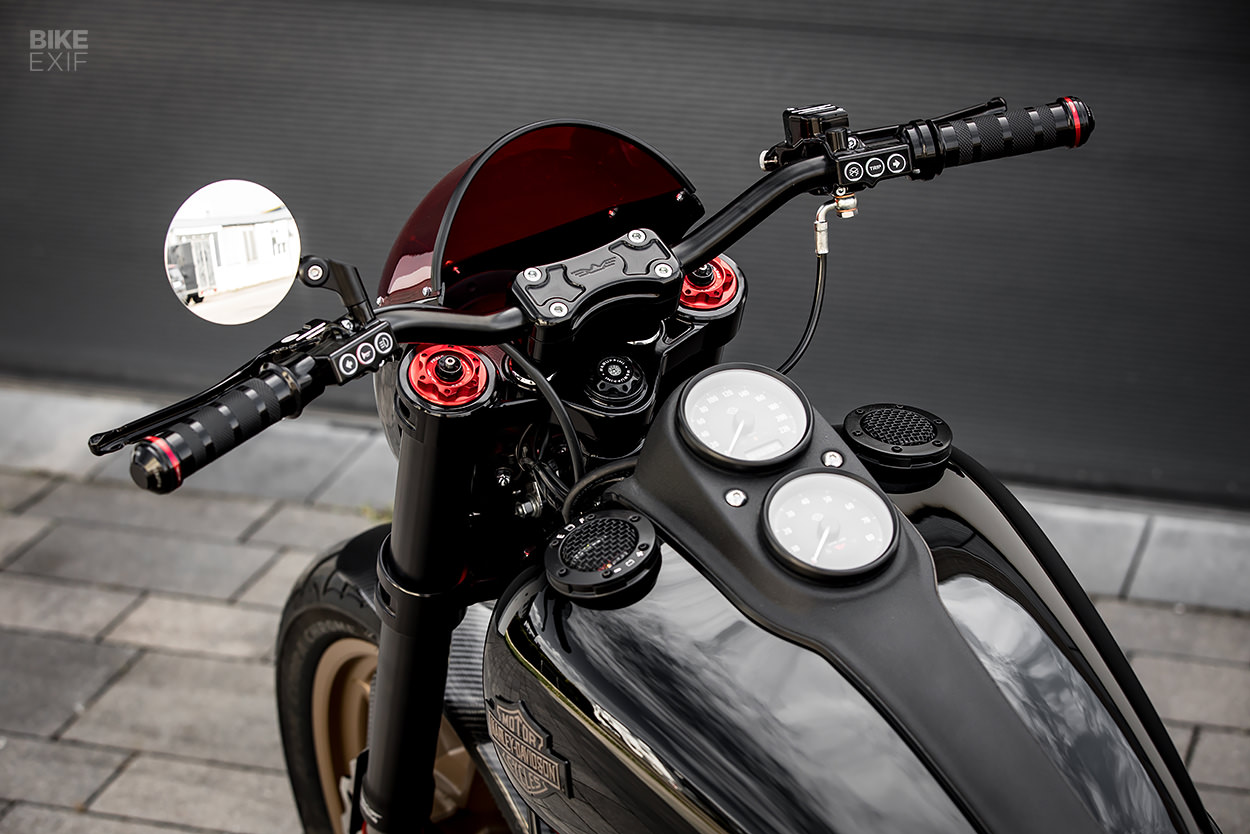 Other Rebuffini goodies include both bikes’ foot pegs, handlebar risers, grips, levers, and backlit switches that are made to plug right into the Harley’s CAN bus system. Both sets of handlebars come from Biltwell Inc., while the mesh-covered fuel caps and fuel level gauges are Kuryakyn parts.

Cross is finished off with Highsider mirrors and a Cultwerk license plate bracket, while Racer wears a glassless Motogadget mirror and a Heinz Bikes plate holder. 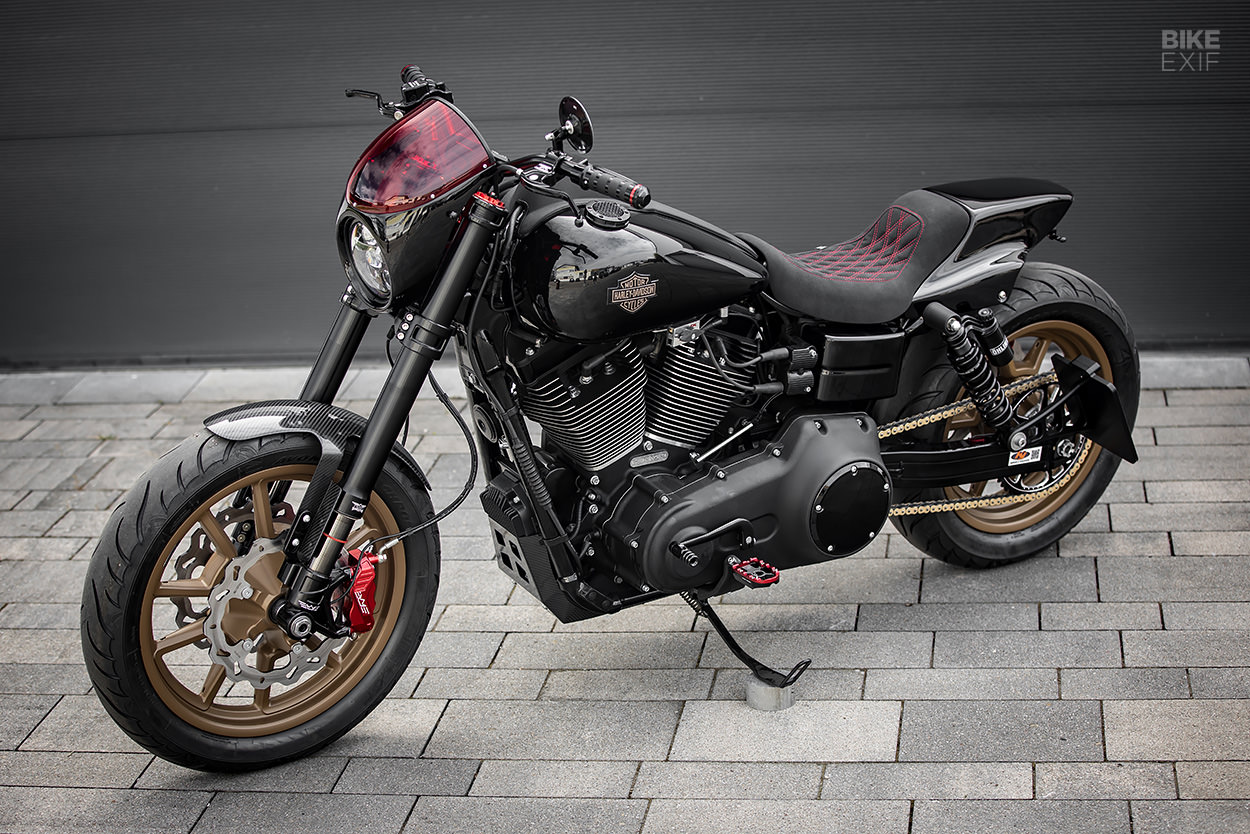 Top marks to Martin for showing restraint on each bike’s finishes. One of the best things about the Low Rider S is its factory paint scheme: lots of black, with matte gold wheels. Martin’s left that all alone (along with the stock speedo and tach arrangement on top of the fuel tank), and simply added an accent color to each version.

Chiko’s Pinstriping handled some detailing on the Racer build, while Metal Skin Works tackled all the powder coating work. 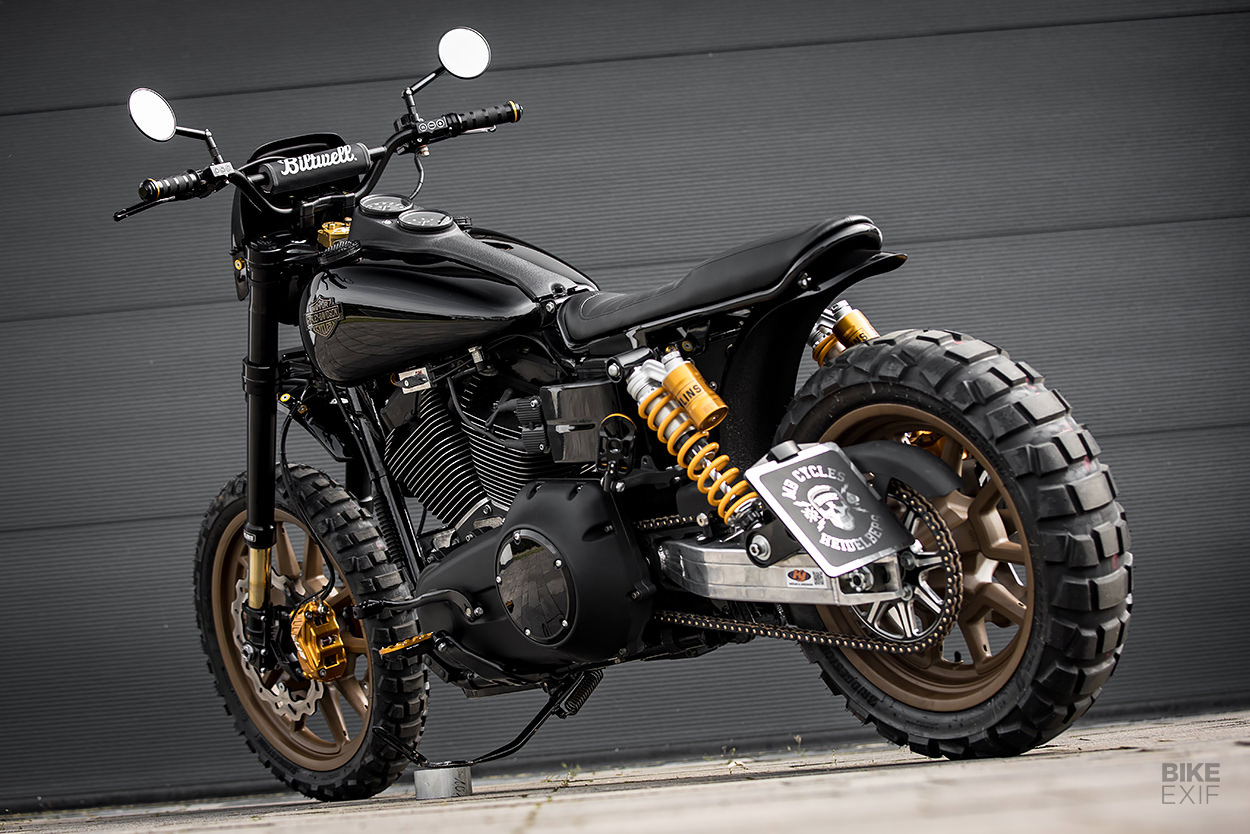 Does it make sense to put knobbly tires or a flat track tail piece on a hooligan cruiser? Probably not, but do we care? Also no.

Like all of Martin’s bikes, these two Low Rider S customs are lean, mean and perfectly judged. We’ll take one in black, please. 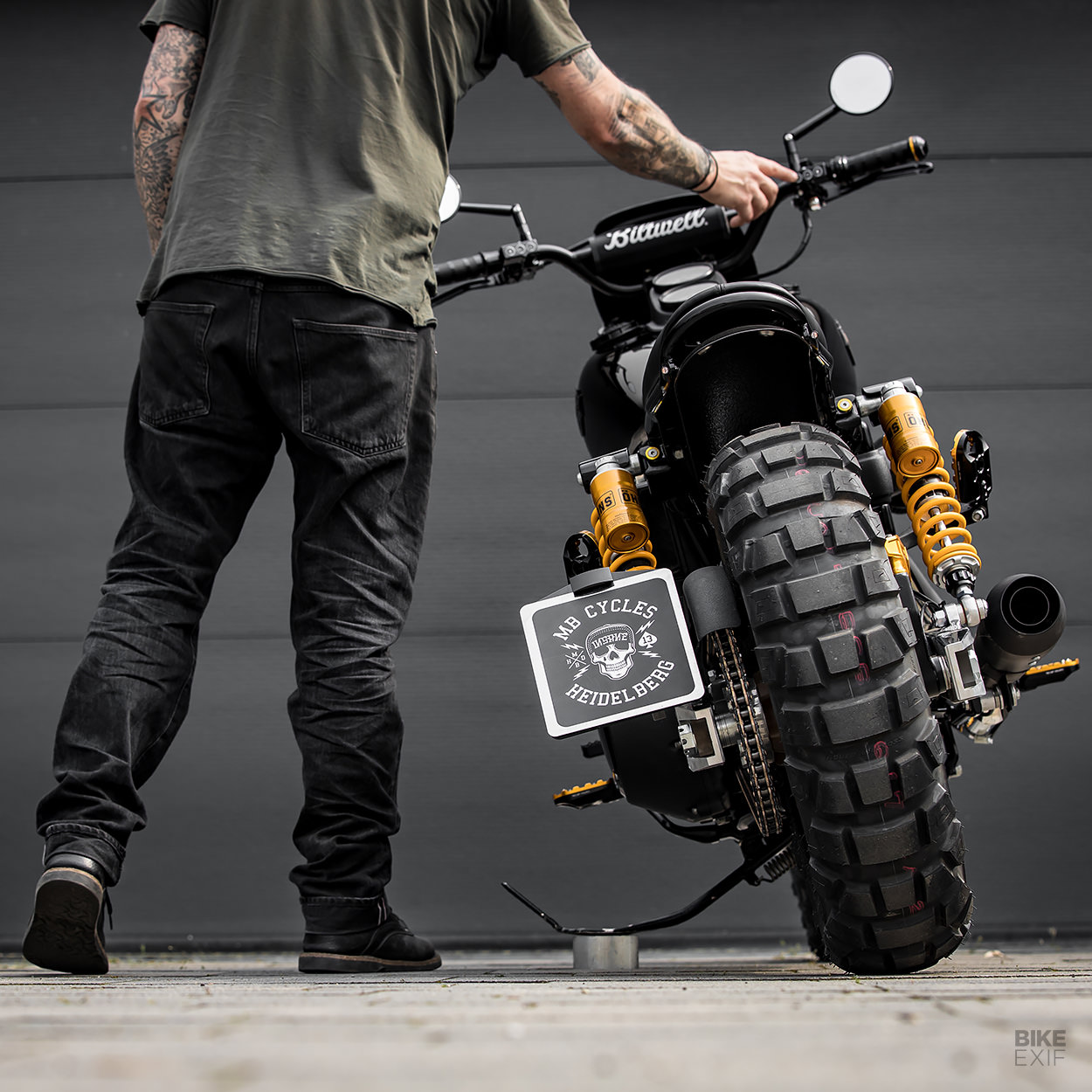