Going Pro: A Harley flathead bobber from a shed builder 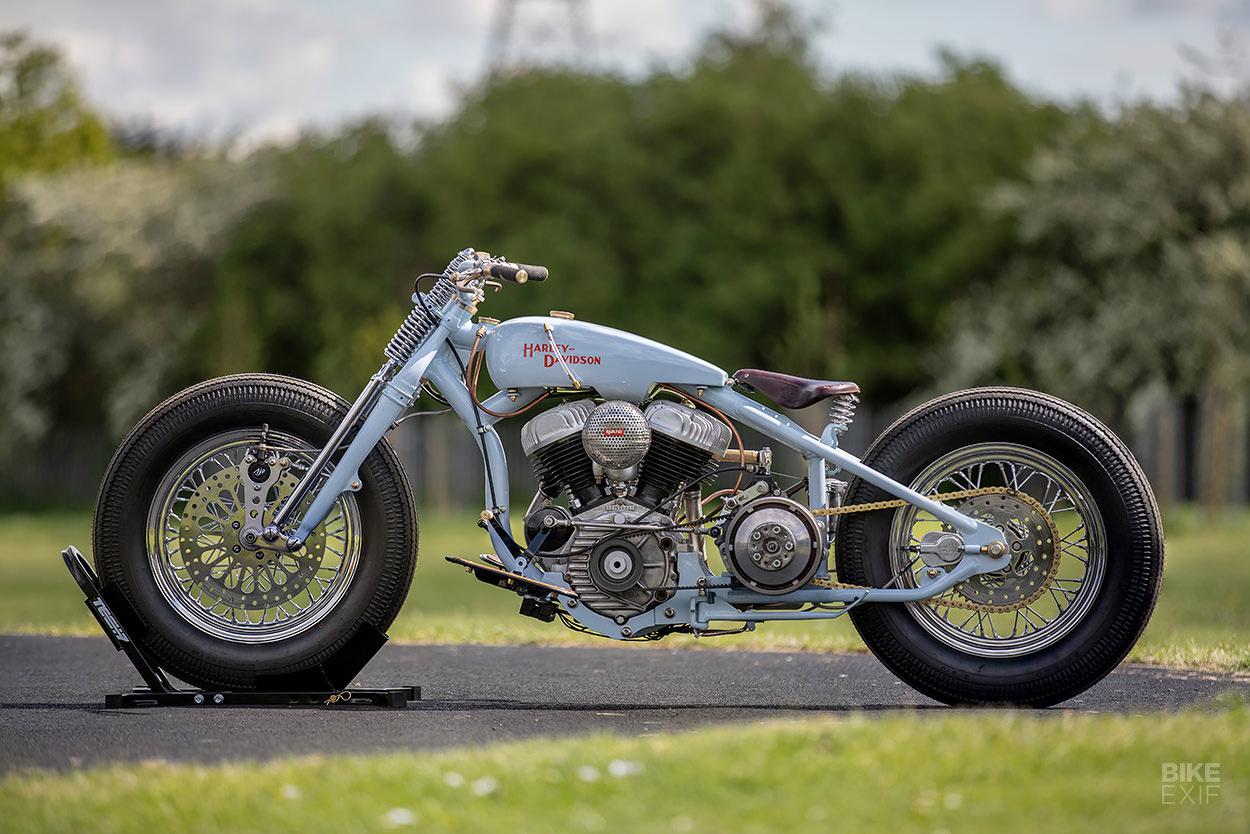 There’s usually a little trepidation when we hear from a custom builder that we don’t know. Is their work any good, or are they a prime example of the Dunning-Kruger effect? But we weren’t quite prepared for how hard our jaws would hit the floor, when this Harley-Davidson WLC flathead bobber landed in our inbox.

It comes from Slobodan Cirkovic—a Croatian ex-pat living in the UK. And although this is the first time we’re seeing his work, he’s been slogging away in his workshop in Corby, just north-east of Northampton, for a long time already. 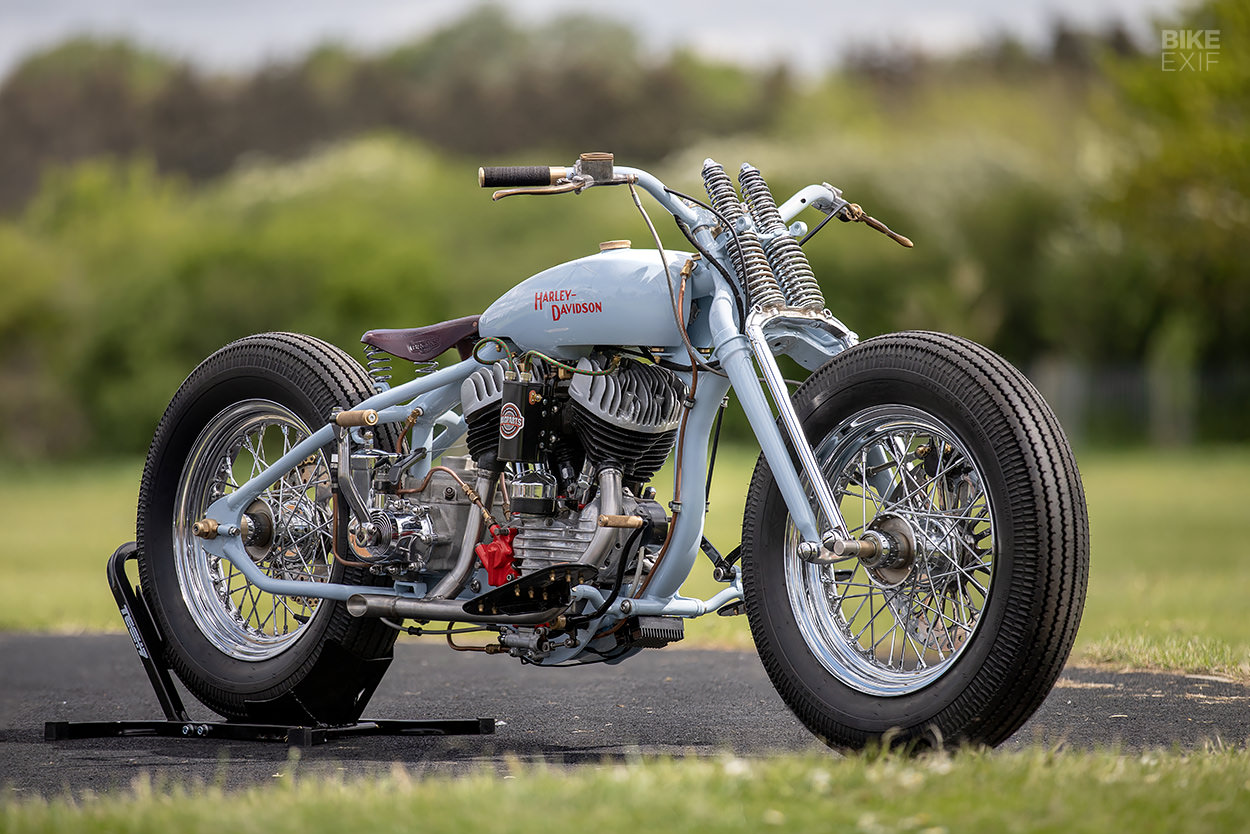 The story behind this bobber is a quite a saga, since it was the catalyst that helped Slobodan step up from tinkerer to serious custom builder. It started fourteen years ago, with a 1943 Canadian army-issue Harley WLC engine found on eBay. “I wanted to start working on the bike, but I knew I would need adequate space, good tools and a lot of spare parts,” he tells us.

“I decided to make some changes to my garage and use it as a workshop. That garage is still in use as my main workshop, and it has produced some amazing bikes over the years.” 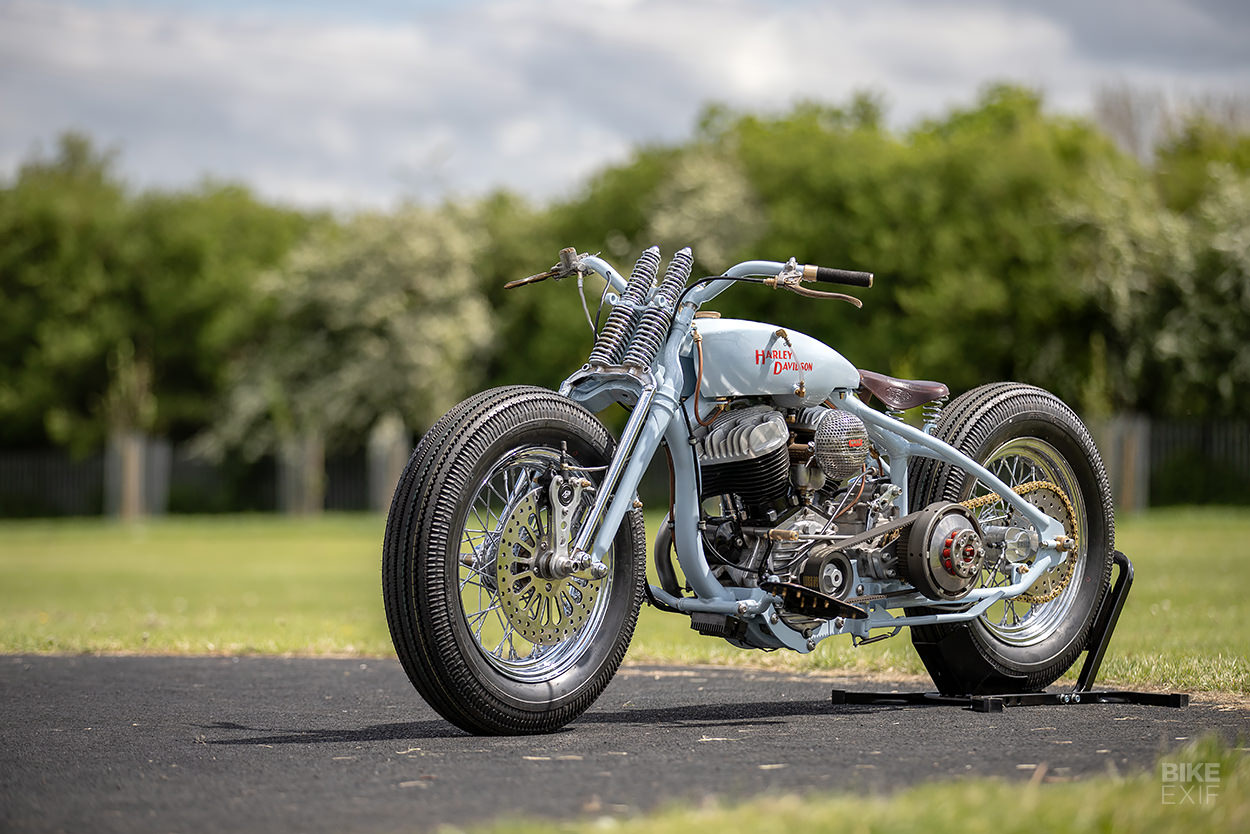 Slobodan first built a steel table and a jig, then bought a lathe, pipe bender and other essentials. Using a pile of steel tubing, and steel plates salvaged from a scrapyard, he started piecing the bike together.

“I welded everything together, which was more challenging more than I thought it would be,” he says. “It was the first Harley I was working on, so it was a steep learning curve. I won’t lie—lining everything up was a nightmare.” 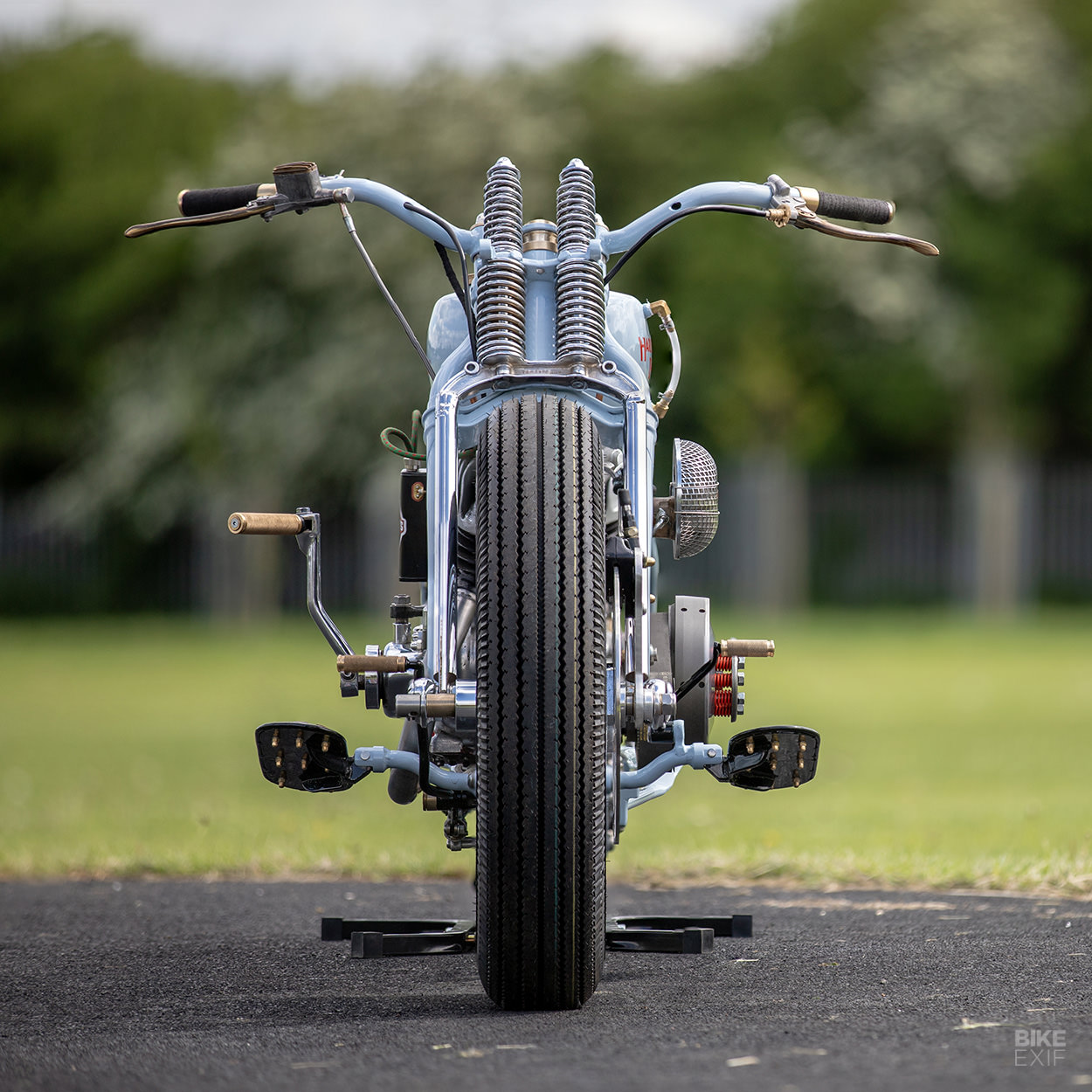 Then, thanks to a mix of personal circumstances and unavailability of parts, the bobber project stalled. Slobodan didn’t slow down though—he kept building café racers and scramblers, and showed them off at local events like the Bike Shed show in London. All while the Harley sat quietly in the corner of his workshop.

The spark was reignited when the UK’s Kickback custom bike competition rolled around last year. Slobodan rushed the build over the finish line and took it to the show, where it was well received. But he saw room for improvement—so he stripped the bike down, hacked up the frame he’d built and started over. 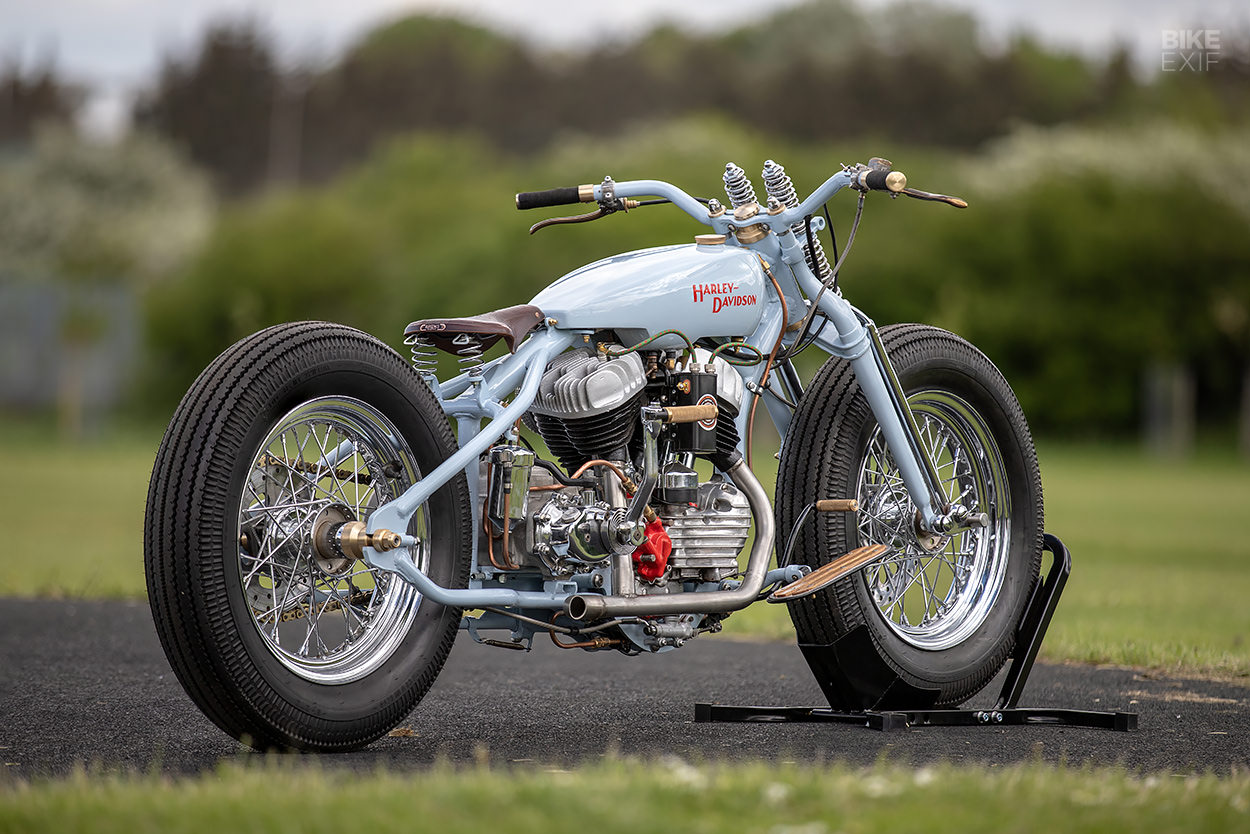 With a clear vision of how he wanted the project to turn out, Slobodan put all his focus into building the bike you’re looking at now. The first step was to throw away everything but the steering neck and lower engine mount from the original frame. Luckily he had material left over from the first build.

“For the frame,” he explains, “I originally used Range Rover subframe tubes that I got from the company I worked for, after we stopped production of that model. There were many leftover tubes, so I asked my team leader if I could have some. When I decided to get back to the Harley project, I found those tubes in a bag under my workbench—a bit rusty, but still good.” 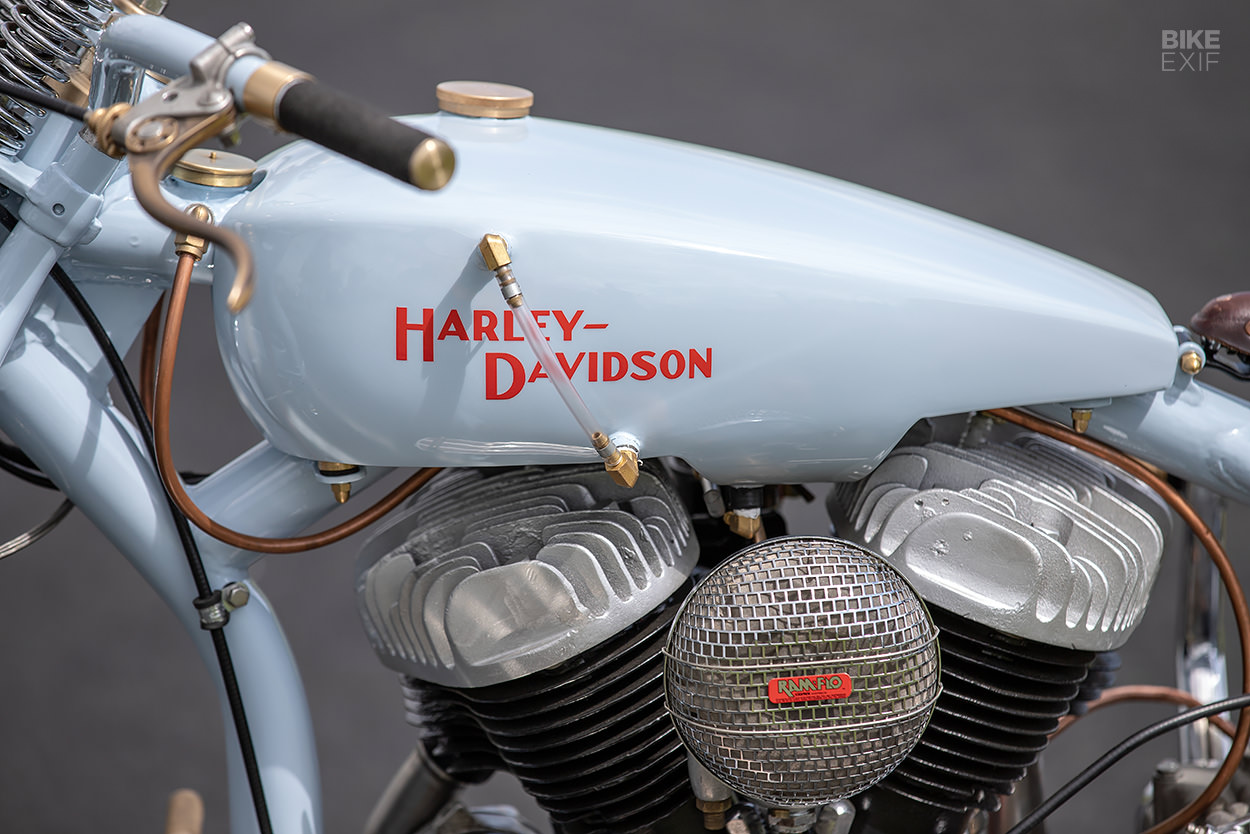 Slobodan had since sold his pipe bender, so he built the curves of this frame by cutting, welding and smoothing each section. Extra care had to be taken, because the Harley’s oil is stored in the new top tube. A new jig was built too, to make sure that this frame was truer than the last one.

The rear triangle uses slimmer tubing, welded to steel axle plates. The biggest challenge though, was building the various engine mounting plates. There had to be enough clearance for the rear wheel and chain, and Slobodan had to make sure that the various drivetrain components were properly matched up. 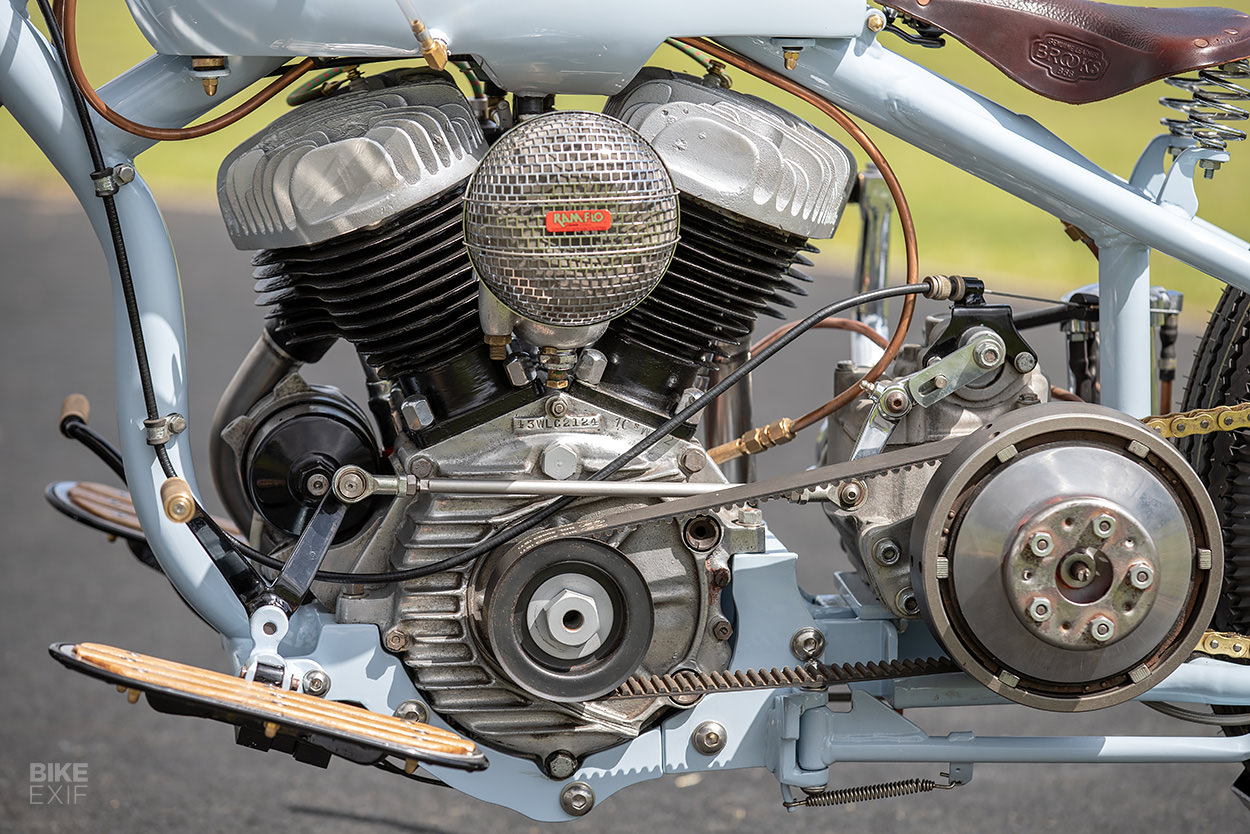 This old Harley actually runs with a mixed bag of parts. The 45.12 ci flathead engine sits center stage, fed by a Linkert M88 carb and exhaling through a handmade stainless steel exhaust. But the transmission is a four-speed unit from a shovelhead, with the open belt drive coming from Belt Drives Ltd.

A bunch of other bits are sprinkled in between, from custom brackets and covers to handmade copper oil lines. Slobodan even made his own foot boards, adding wood trim to mimic the look of a yacht’s deck. 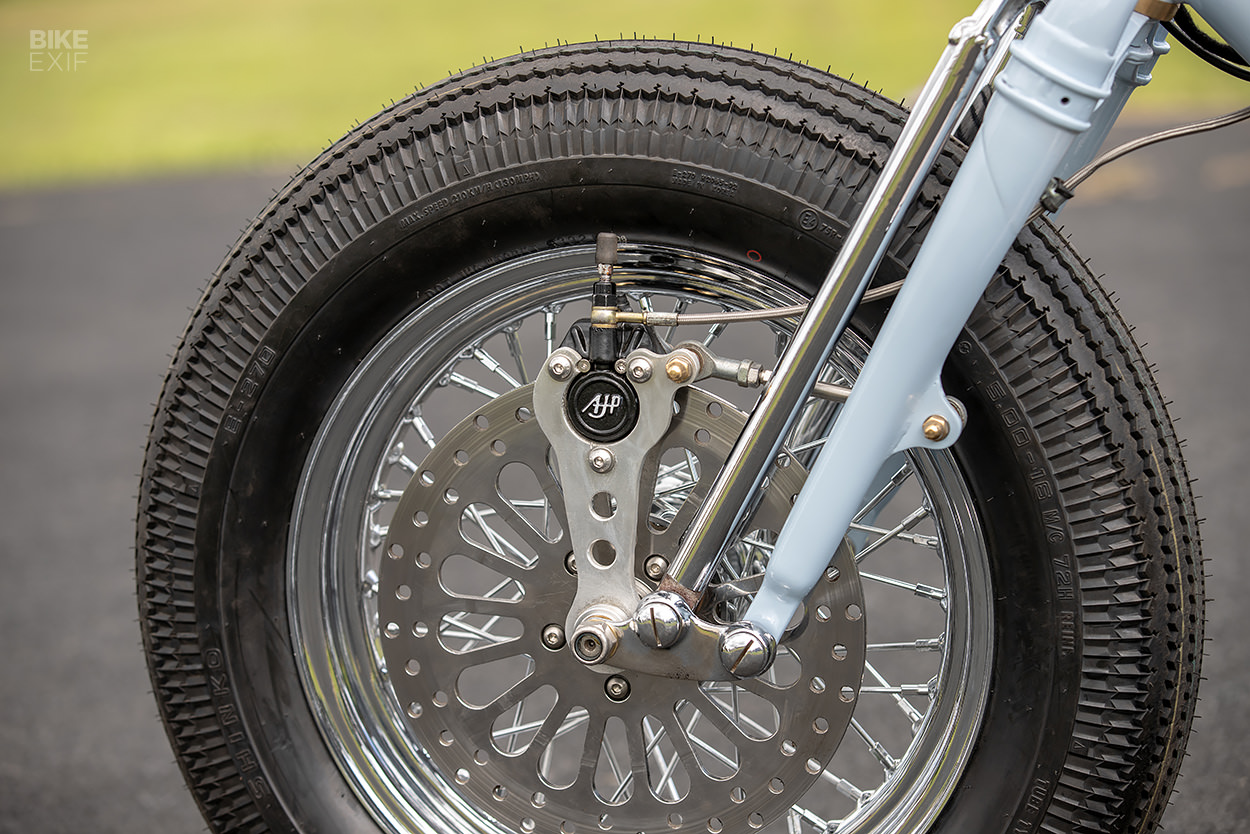 Up front is a Harley-Davidson springer front-end, but even that could go onto the bike untouched; it was in such a bad state that it needed serious massaging to install. The bike rolls on 16” laced wheels, wrapped in vintage rubber and kitted with a mixed bag of braking parts.

The front brake uses a Harley disc and a vintage AJP trials bike brake caliper, mounted with a custom bracket and spacers. The rear brake setup is from Exile cycles, and uses a combination rear sprocket and disc. Yes, this vintage Harley bobber has disc brakes. 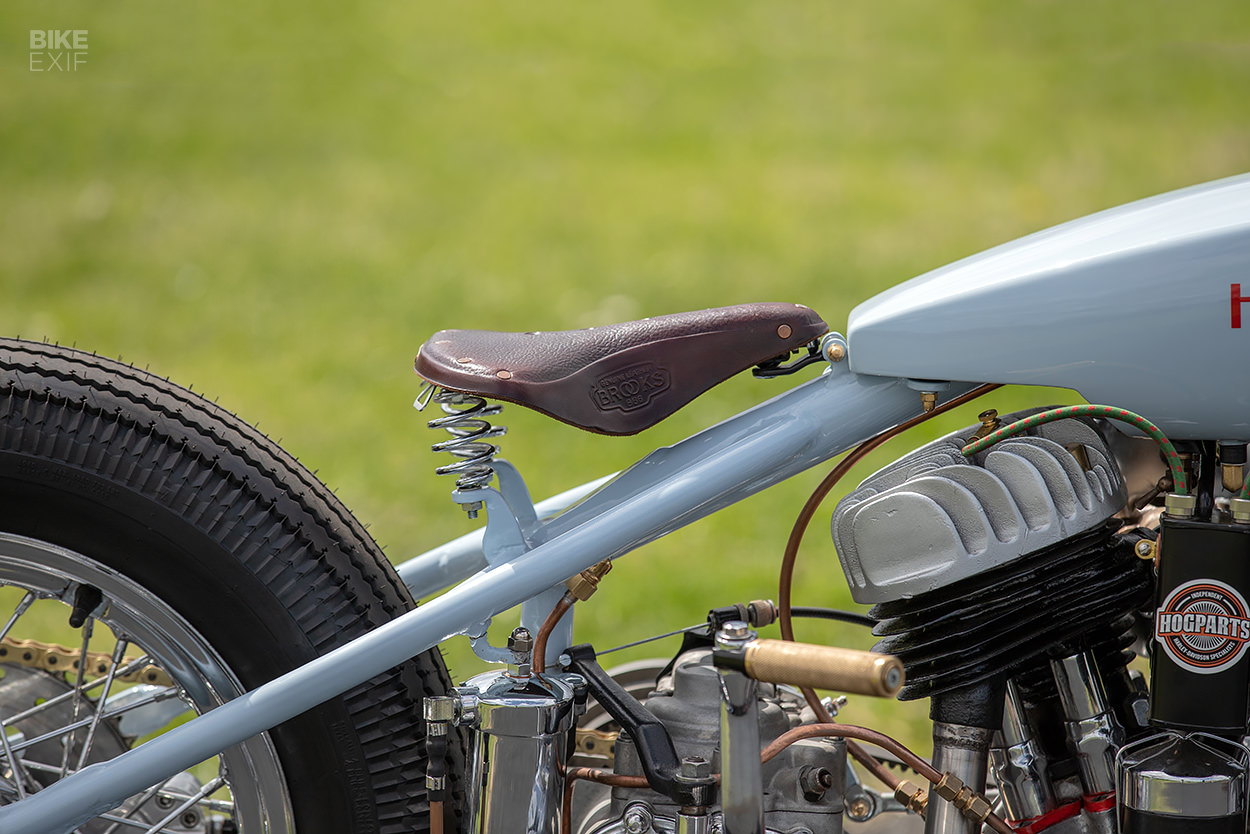 Up top is a custom-made fuel tank, fabricated to take into consideration the shape of the engine, and with hidden cutouts to house bits like the ignition coils. Slobodan built a custom seat too—but then tossed it, opting for a vintage Brooks bicycle seat mounted on springs instead.

It seems like a lot of effort just to sacrifice comfort, but Slobodan explains that his biggest goal was keeping the overall design as svelte as possible. “I am always the guy who chooses the hard way, never the easy way. For me, it was important to make a smaller, nice looking bike with smooth lines, without using many aftermarket components.” 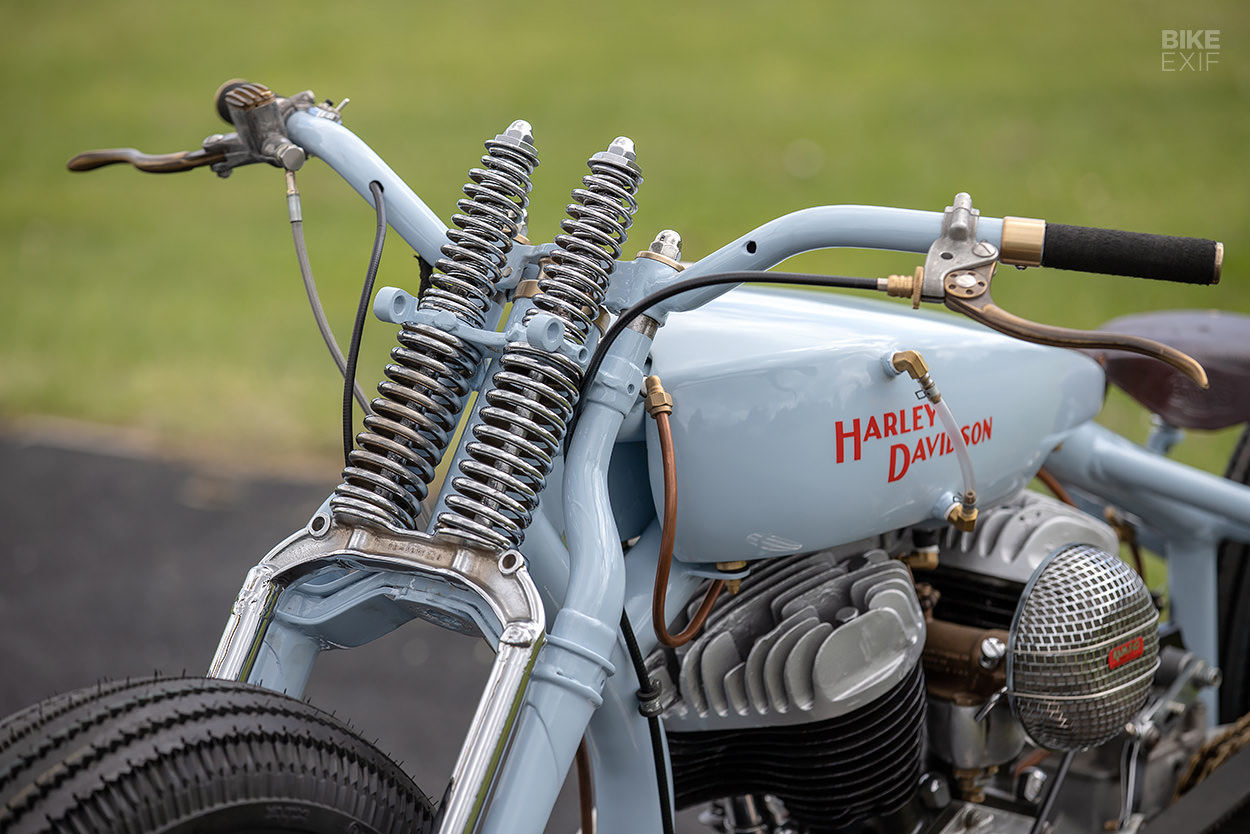 A set of custom-built handlebars, equipped with brown leather grips, K-Tech controls and only the most essential of switches, kit out the cockpit. Keen eyes will notice a headlight bracket too, although the light itself isn’t fitted here. Slobodan’s not in a rush to make the bike fully road legal, and wants to test ride and tune it a bit more first.

The only thing Slobodan didn’t do all by himself, is the fetching blue paint job. But everything else was his work—right down to all the small brass pieces that came off his lathe. 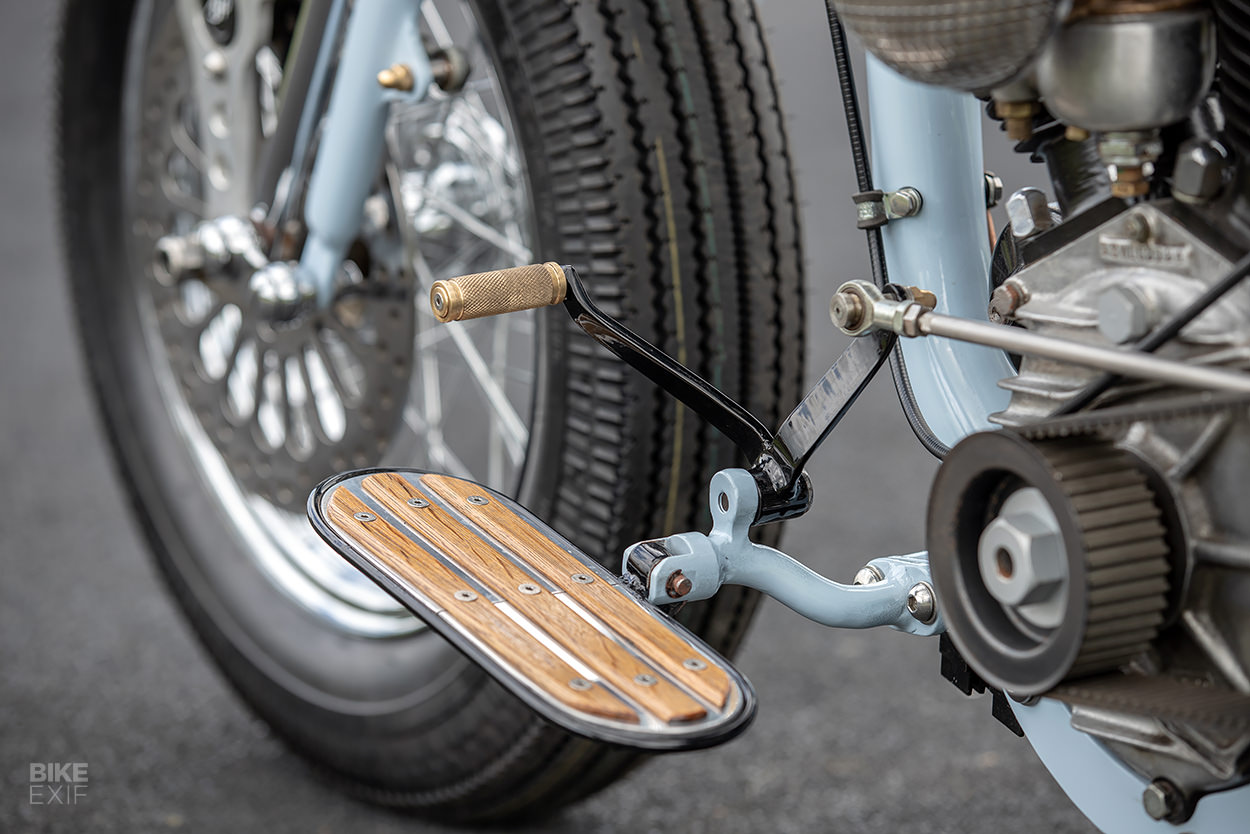 “People will not believe how challenging this project was,” he adds, “and how quickly it was done on a really small budget.” We believe him. And looking at the finished project, it’s hard to pigeonhole Slobodan as a shed builder.

His friends agree, so they’ve been goading him into turning his hobby into a business. He’s calling himself BobC Custom Motorcycles, and if he keeps this up, it’ll be a name to watch. 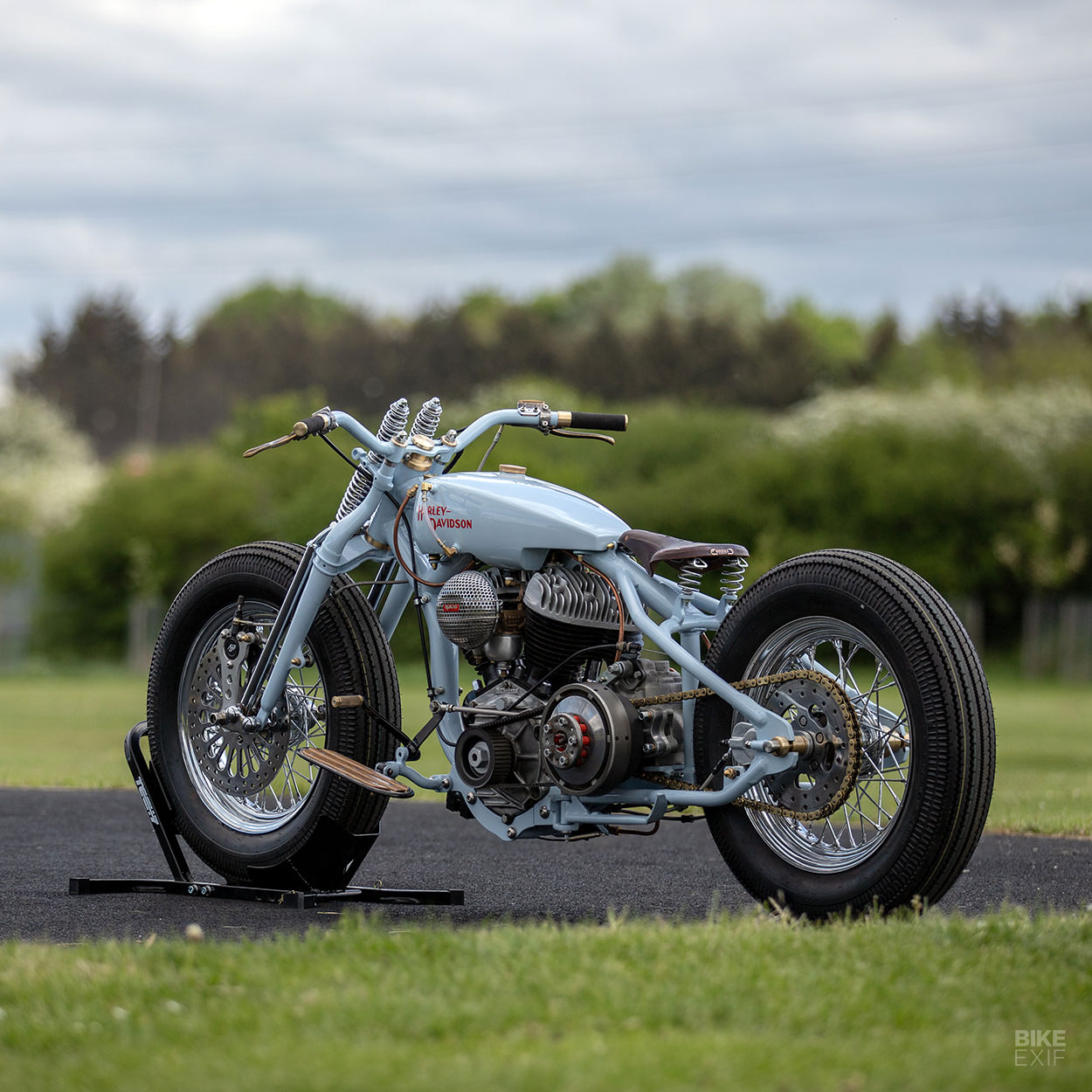