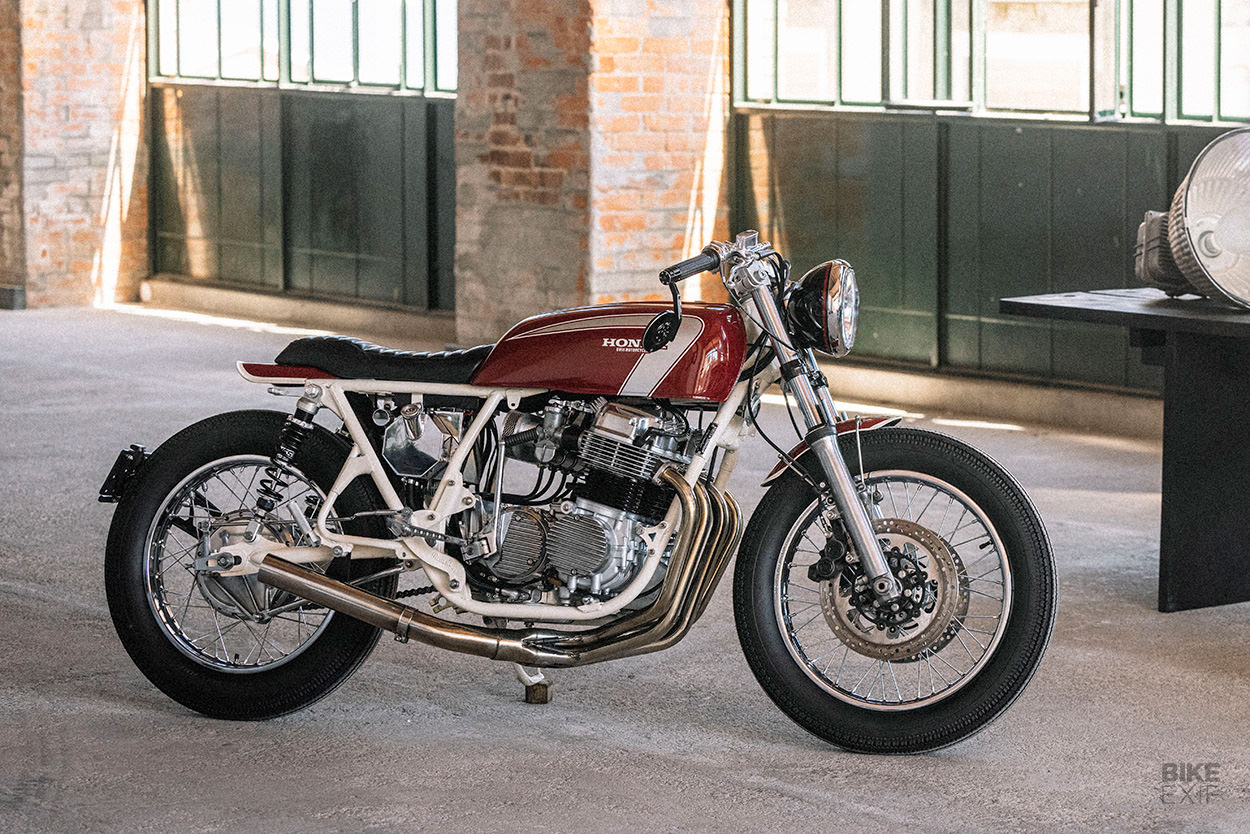 Anyone who’s been doing a job long enough has probably made a few rookie mistakes. For Tiago Gonçalves and Luis Gonçalves at Unik Edition, it was buying this 1978 Honda CB750 in the Portuguese shop’s early days, with their first bit of profit.

“It was bought without first being seen and evaluated,” Tiago admits, “which turned out to be a bad decision. Between legalizing it, repairing the engine and improving it, a lot of time passed. We saw the bike go from one corner of the workshop to another, and donating parts to other Hondas.” 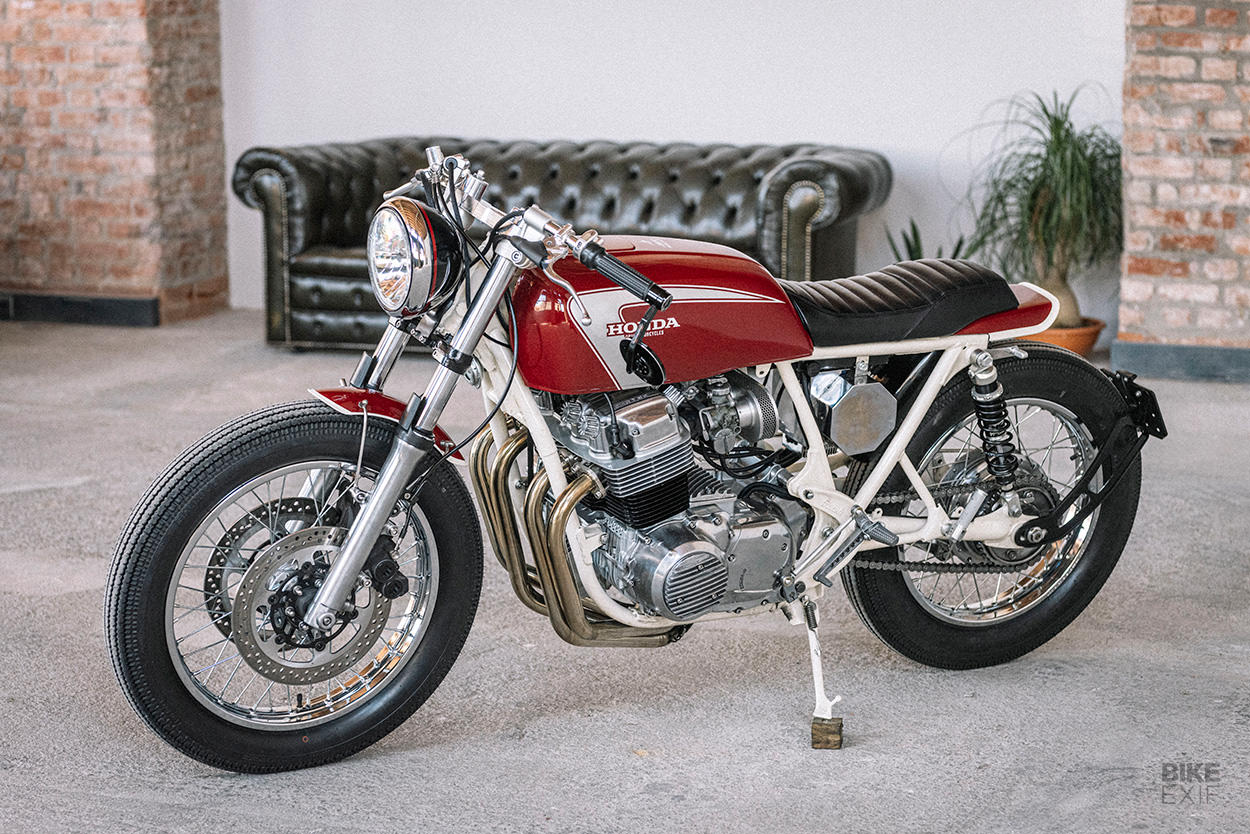 “We would occasionally show the bike to potential customers, but no one believed enough in this bike. Deep down we believed that this bike was meant to have a happy ending… we just didn’t know when.”

The CB’s fortunes turned when new clients, Ivan and Bárbara, visited Unik Edition’s workshop. They’re big fans of the shop’s work and of the Honda brand, and fancied the romantic notion of ‘saving’ the forlorn donor. And other than a few basic guidelines, they were happy to let the crew build it the way they wanted. 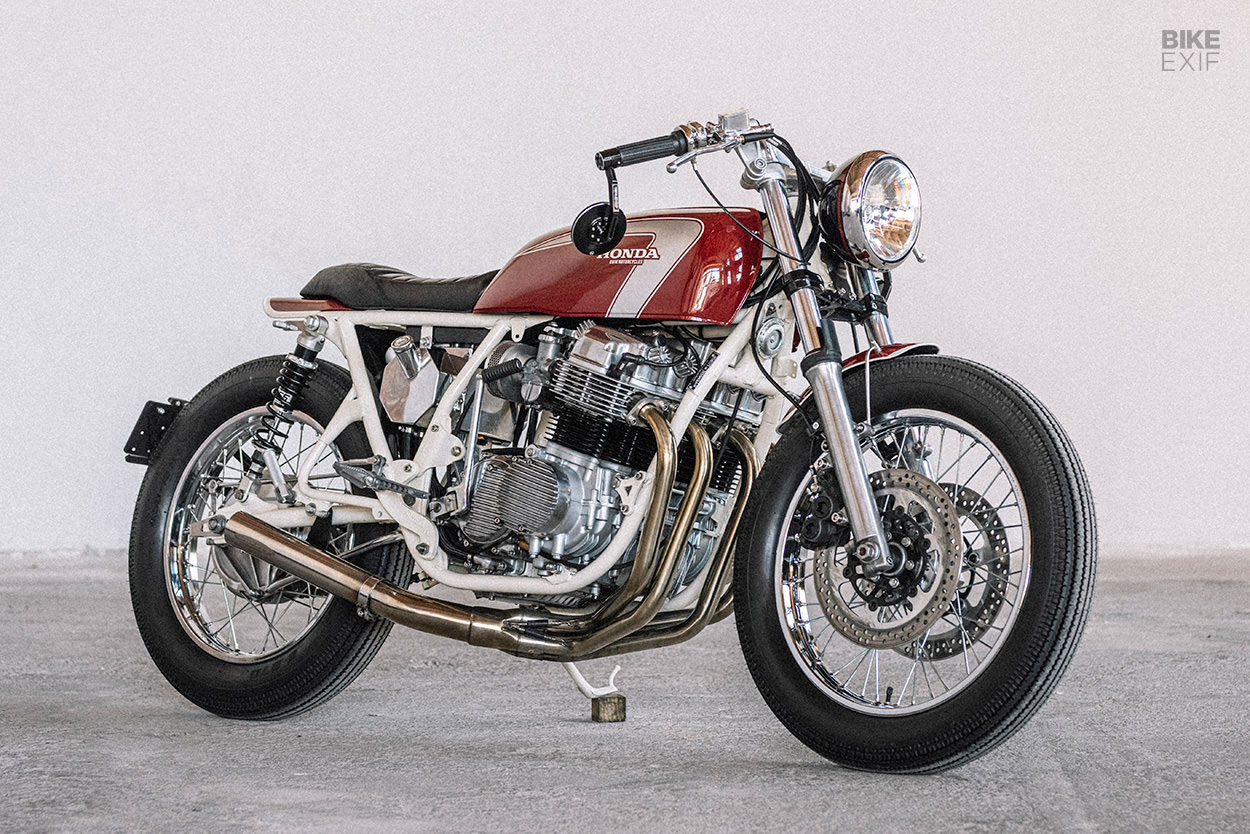 Thanks to work done over the years, the CB750’s motor was running just fine when the project kicked off. But the bike itself was less than complete; it was missing its foot pegs and a few other bits, and was standing on flat tires. 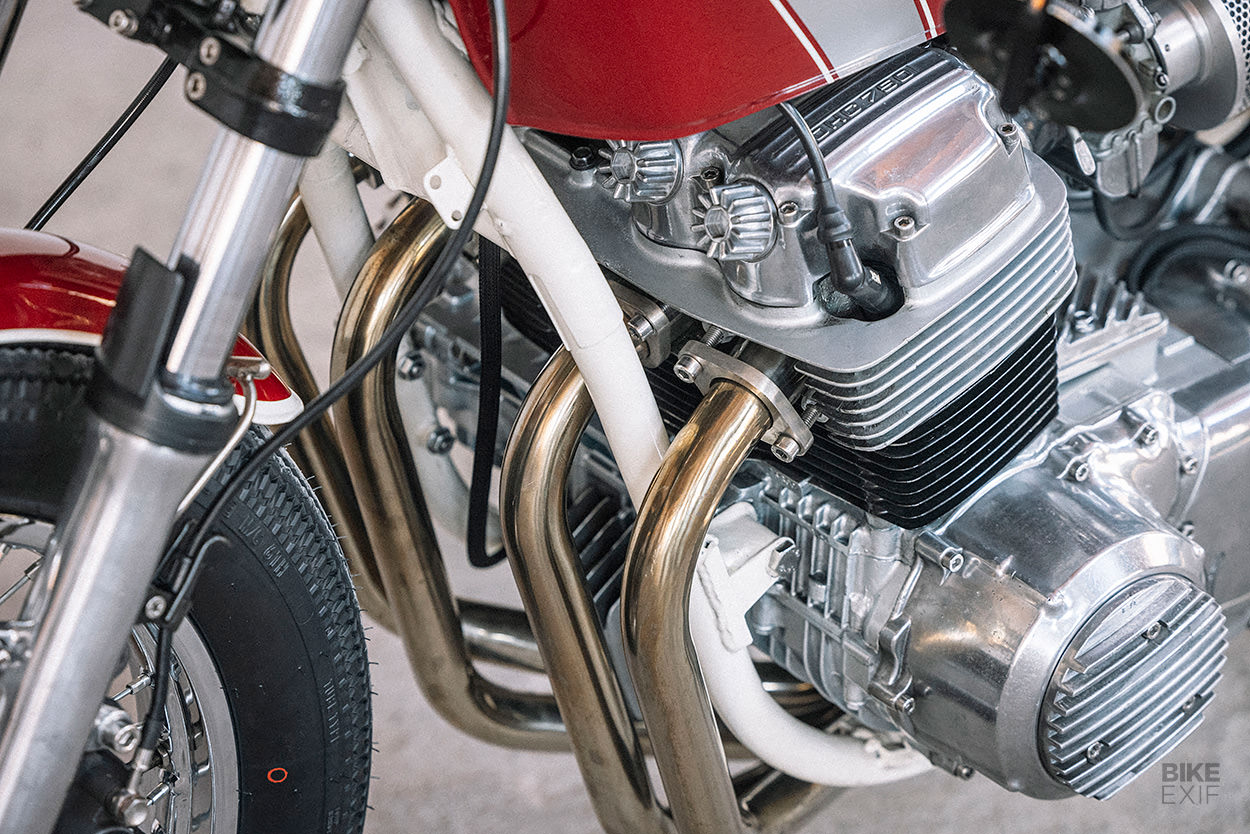 The engine’s helped along with a few off-the-shelf bits, like an oversized air filter unit and a chromed four-into-one exhaust. Unik also installed a Dynojet kit to get the carbs to play nice with the new parts, and rewired the entire bike around Motogadget components. 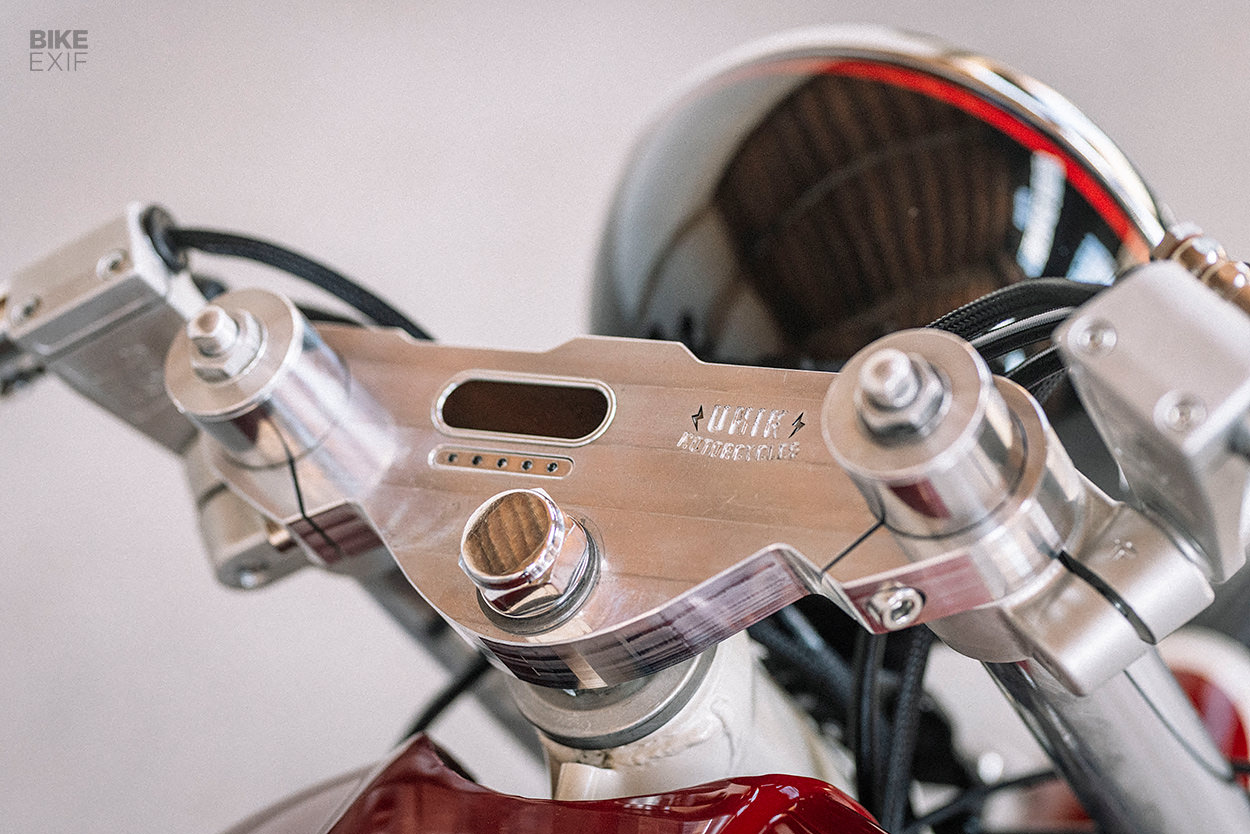 All of the CB750’s running gear is new too—starting with the forks and dual front brake discs from a Yamaha XJR1300. Unik installed the forks using the XJR’s bottom yoke, and a custom-made top yoke. It’s a sano design with no riser mounts, and a flush-mounted Motogadget speedo and warning light array.

Out back is a new set of YSS shocks. The wheels are fresh too, built up using restored hubs, new spokes and DID rims. Vintage treads from Shinko round out the package. 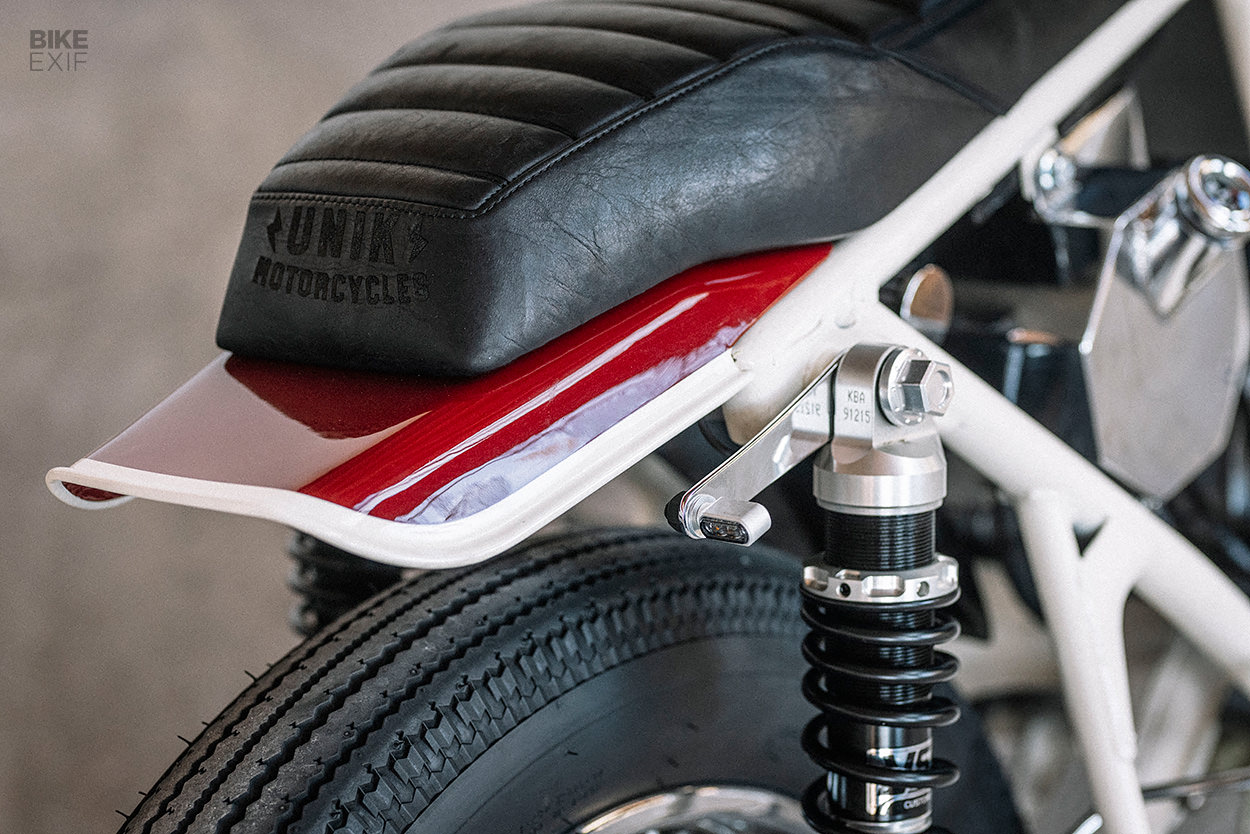 The CB750’s bodywork is a mix of old and new. Unik kept the OEM fuel tank, but shaped up a new seat—complete with a gel insert and genuine leather upholstery. It sits atop a custom subframe, bookended by a boxy little rear fender that ends in a subtle ducktail.

That particular feature actually comes off the original bike: it’s a piece of the original mudguard that used to run behind the back wheel, cleaned up and repurposed. 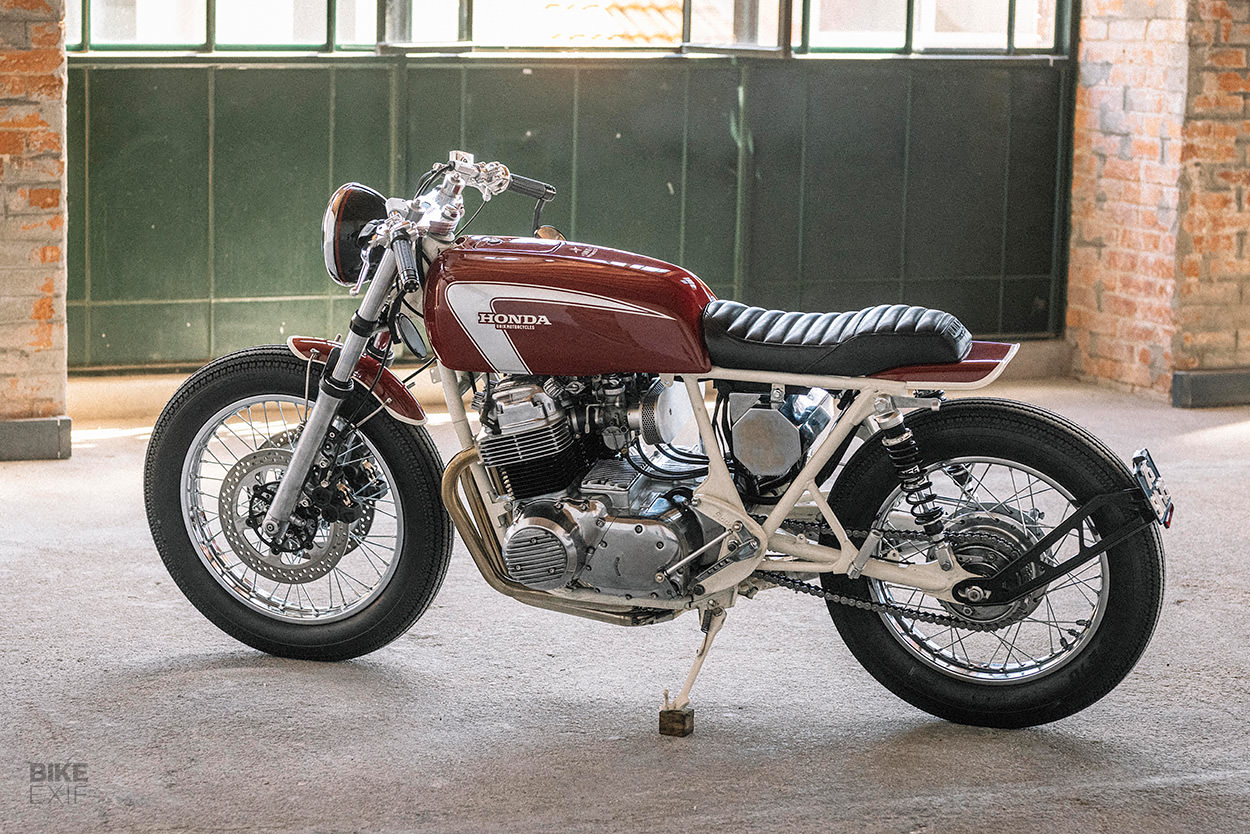 The license plate now sits on a swingarm-mounted bracket, and there’s a stubby fender up front, mounted on a set of hand-made struts.

Just below the seat is an oil tank borrowed from an old Harley-Davidson. Unik welded in extra tabs to mount it, and even went to the trouble of finding a dipstick with a thermometer that measures in Celsius rather than Fahrenheit. 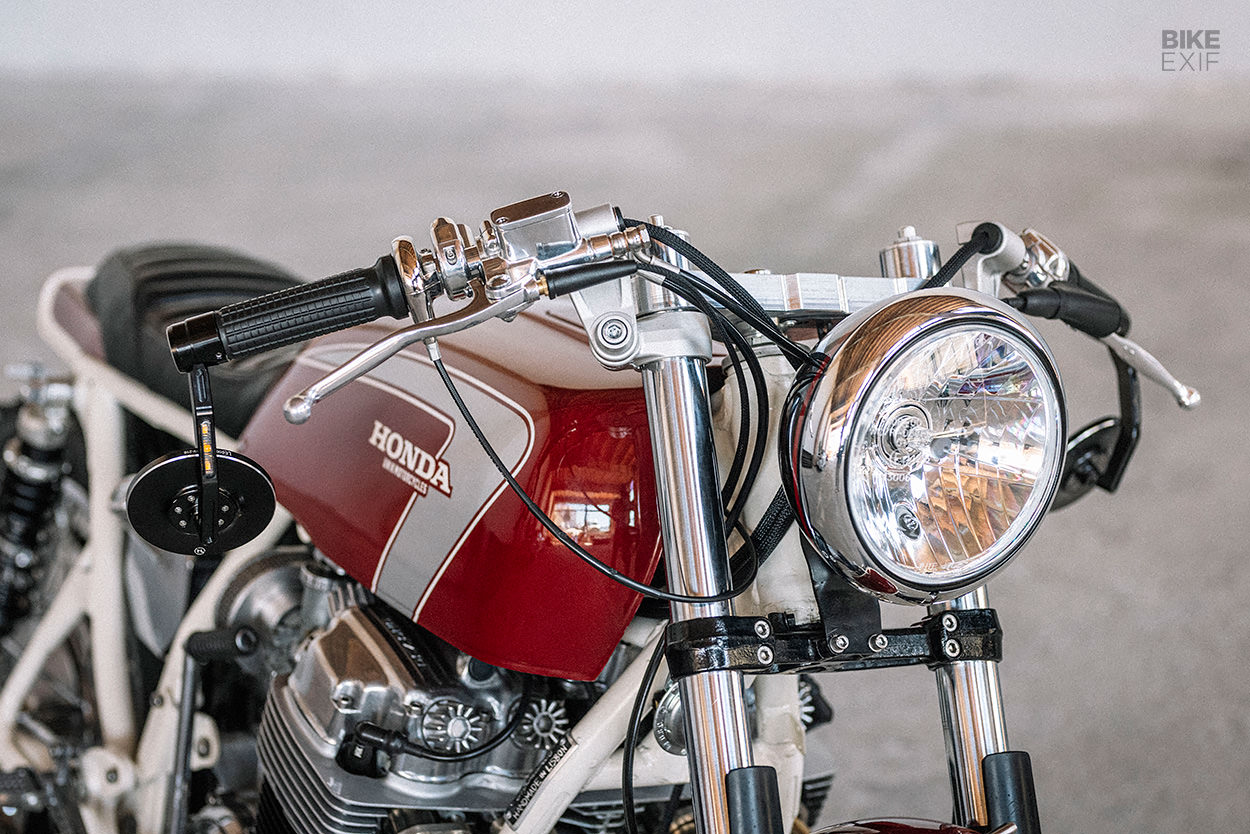 A pair of Highsider LEDs do turn signal and taillight duty at the rear, sitting on custom brackets that attach to the shock mounts. 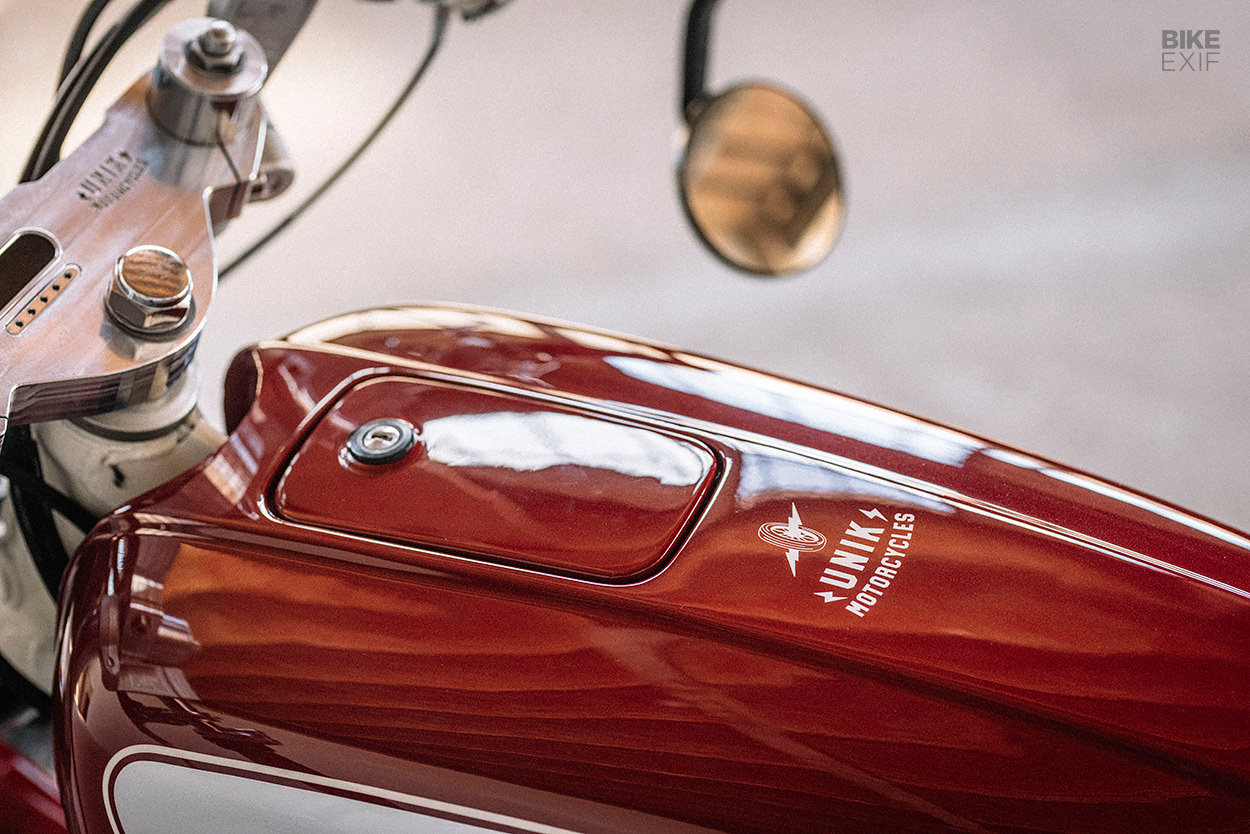 Wrapped in a deep red paint job, with an off-white frame and period-correct graphics, this CB750 looks as chic as it does regal. Redemption, at last. 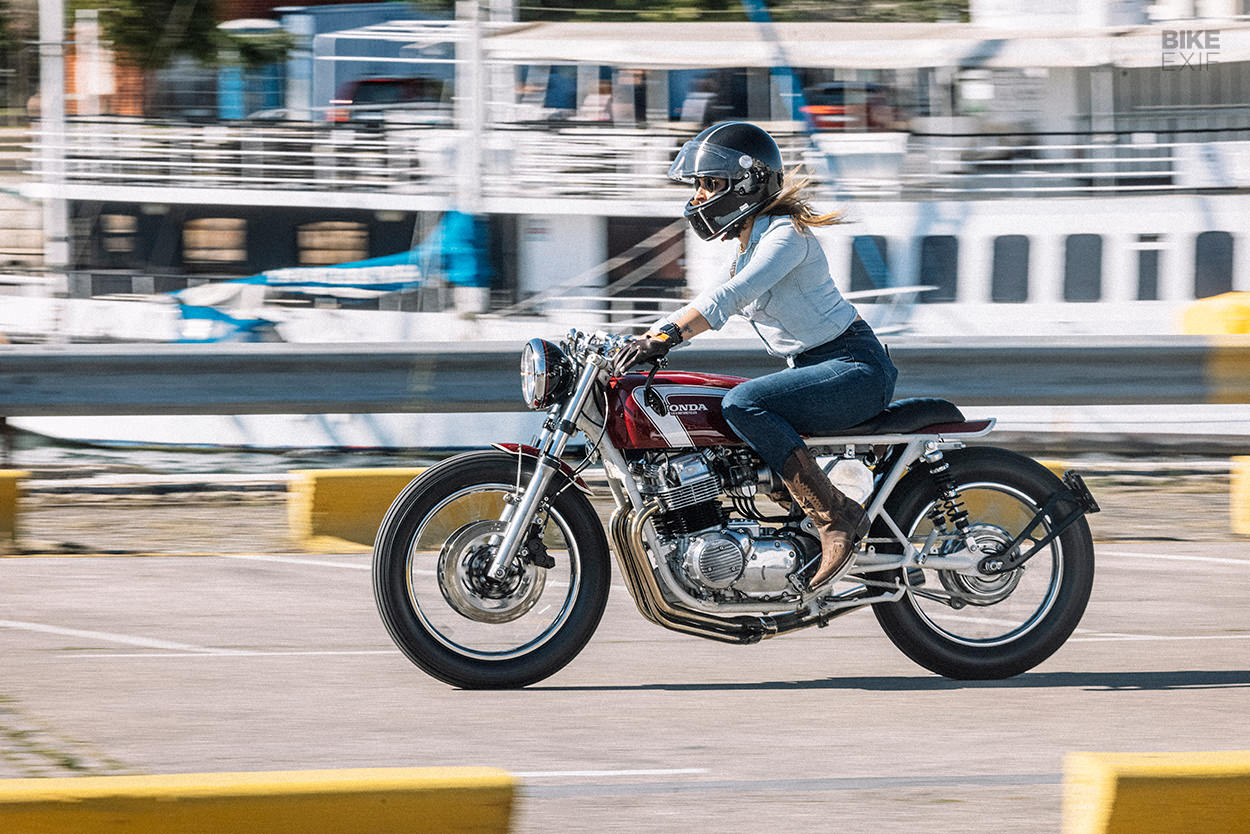