Here comes trouble: A Triumph TR6 with a Matchless frame

Kids are impressionable, especially when motorcycles are involved. That magical combination of sound, smell and danger has a way of imprinting itself on young minds. But Kyle Harvey didn’t just dream of bikes as a child—he practically grew up with them.

Kyle’s trade is tool and die making, but his passion is building bikes. His father, Garth Harvey, got Kyle and his brother into bikes at a young age; as soon as they could start their old man’s vintage motorcycles, they were riding them. Living in Edenvale in South Africa’s Gauteng province, the boys also had direct access to the local Classic Motorcycle Club. 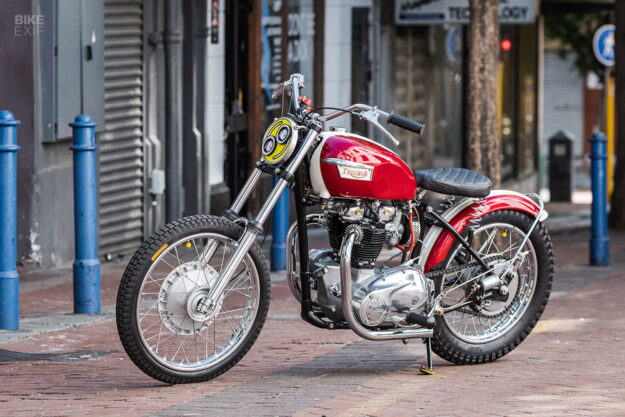 The folks at the CMC made quite an impression on young Kyle—and taught him everything he knows about vintage bikes. After helping numerous friends work on their bikes, he went on to open his own shop, named simply ‘The Workshop.’ Kyle has been building and restoring classic motorcycles for over a decade now.

This cheeky bobber is his latest build, and it’s immensely fascinating. The engine’s from a Triumph TR6 Trophy, the frame is from a Matchless, and the quirky handmade details on it are endless. 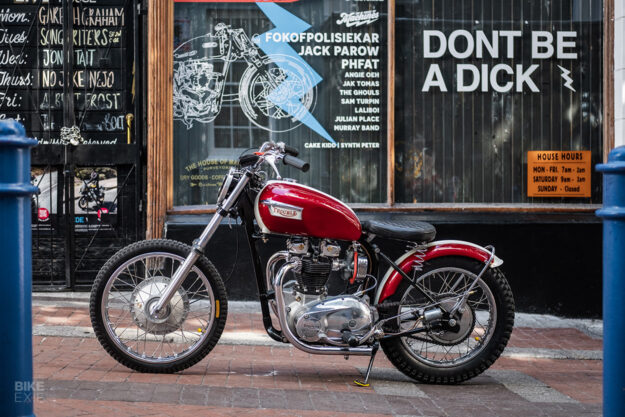 Kyle’s imagination was sparked when he stumbled across a 1946 Matchless G80 frame around five years ago. He wanted to build a bobber that shied away from the stretched-out hardtail look, and the short Matchless frame was exactly what he needed.

To prep the frame for the 1971 Triumph TR6 Trophy engine chosen for the build, the backbone was cut out and replaced with an oil-bearing one. After that, the engine went in smoothly, with the bottom part of the frame matching up perfectly. 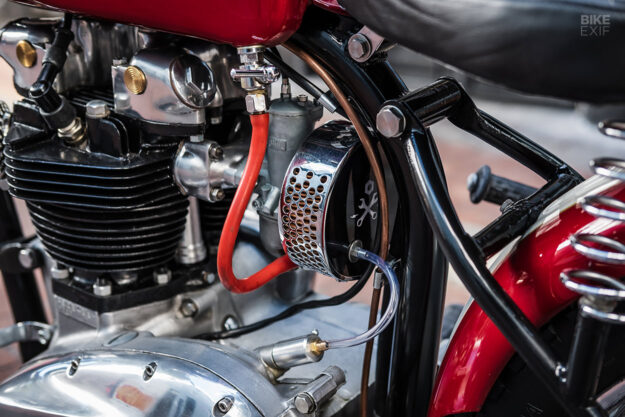 The motor itself needed a full rebuild. Earlier model rocker covers were modified to fit it, then polished, while the head and barrel were painted black as a nod to older Triumphs. The ignition was replaced with a self-generating unit, fitted where the alternator used to be.

The engine sucks fuel and air through a new 32 mm Amal carb with a pancake filter, and makes noise through a pair of slash-cut pipes. For an ultra-clean look, it runs without a battery. 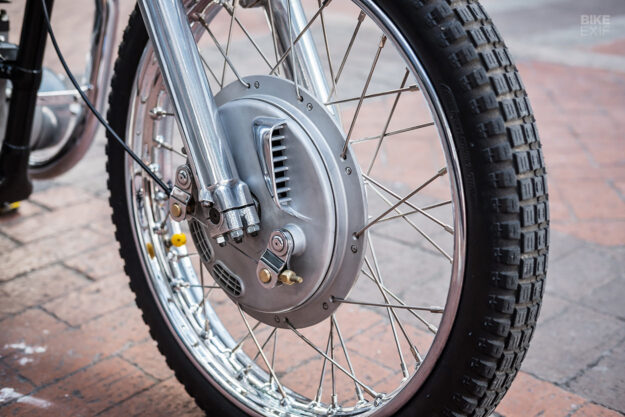 The wheels feature Triumph and BSA conical hubs, which were blasted to get another 50 years of use out of them. Kyle cut down the scoop on the front drum and polished what was left. The brass details are a particularly nice touch—as are the smiley face valve caps.

“I tried to use as much as I could from my shed full of spares and old scrap,” says Kyle. “The head steady and brake stay are made from old spanners. The brake rod I made from stainless steel rod, and then welded a shackle from my sailing toolbox on the other end.” 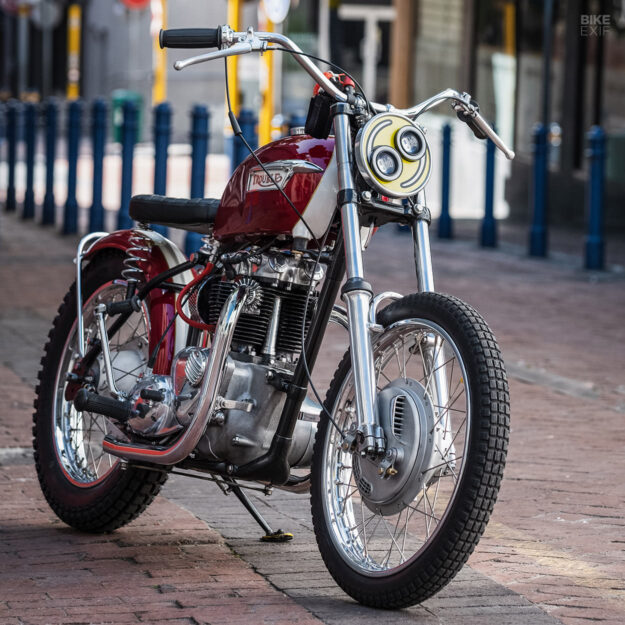 Covering the frame’s backbone is an American-spec 1969 Triumph Bonneville tank. The American Bonnie had a skinnier tank than its British counterparts, and it looks perfect on the stripped-back bobber.

To soften the ride out the back, Kyle made a saddle that pivots at the front and is sprung at the back. Expertly diamond-stitched in leather by Wynberg Auto Trimmers, it looks like a nice enough place to sit—especially behind those wide, relaxed bars.

The dashboard is painfully simple; there’s barely anything there. The bars wear Lowbrow Customs grips, replica Amal levers and little else, save for a basic kill switch.

“The kill switch is fitted with a surf leash,” Kyle points out. “This way, I can take the bike down to the beach, go for a swim and not lose the key! It also reminds me of a speedway bike my brother once owned.” 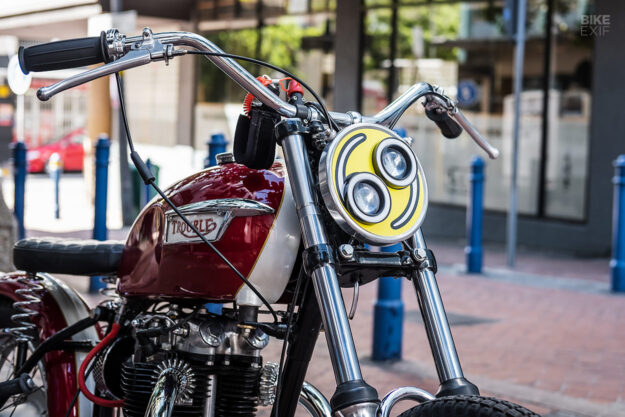 Mounted to a set of Triumph forks is a unique headlight nacelle, fabricated by Kyle. The lights are LEDs, and the ’69’ decal was made by a local shop, Print Design Studio. There are no turn signals, but there is a taillight—it was made from an old Amal carb housing, and bolted to the rear foot peg mount.

The bike was an all-hands-on-deck kind of build. All the mudguard stays and brackets were made in-house, and Kyle’s dad laid down the pearl white and candy red paint himself. The rear mudguard was lifted from a BSA and painted to match, giving the bike an old-school hot rod vibe. 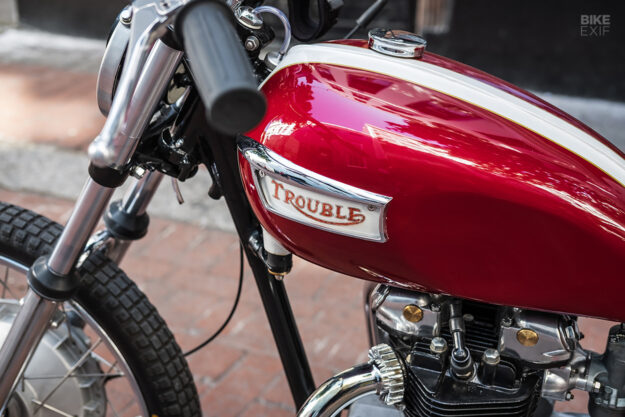 Finally, Kyle’s sister-in-law drew the “Trouble” logos on the fuel tank, by hand.

“The name comes from helping my brother build his first bike—a 1962 Triumph Tiger 110,” explains Kyle. “It was built from scratch and we really battled with it. Fortunately, my dad taught us to never give up, and we finally got it right. Since then, all Triumphs are considered trouble.” 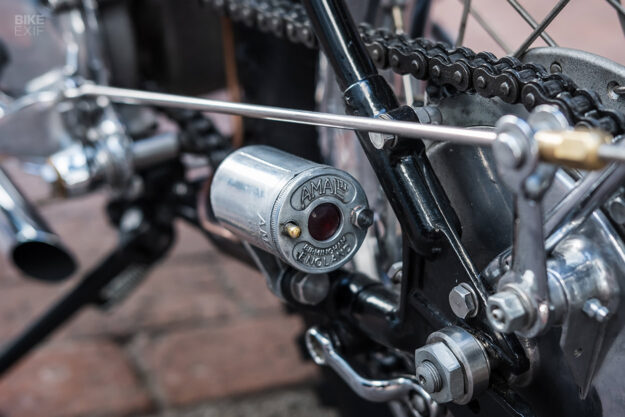 Incredibly, even though Kyle had been collecting parts for years, this bike was built in only four months. If having a child and moving house weren’t enough pressure, Kyle learnt that Africa’s premier custom motorcycle show, The Lightning Bolt, was returning to Cape Town. So he pushed on and debuted the bike at the show.

“I would like to thank everyone who helped me with the bike,” he adds. “Special thanks to my friend Tristan for all the help with little bits in the workshop, and Greg and Jimmy from the Edenvale Classic Motorcycle Club for the chroming.” 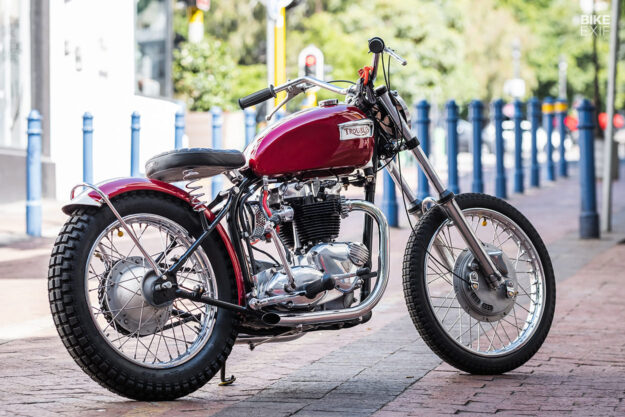 If Kyle’s Triumph and Matchless hybrid proves one thing, it’s that the next generation of bike builders is in good hands. 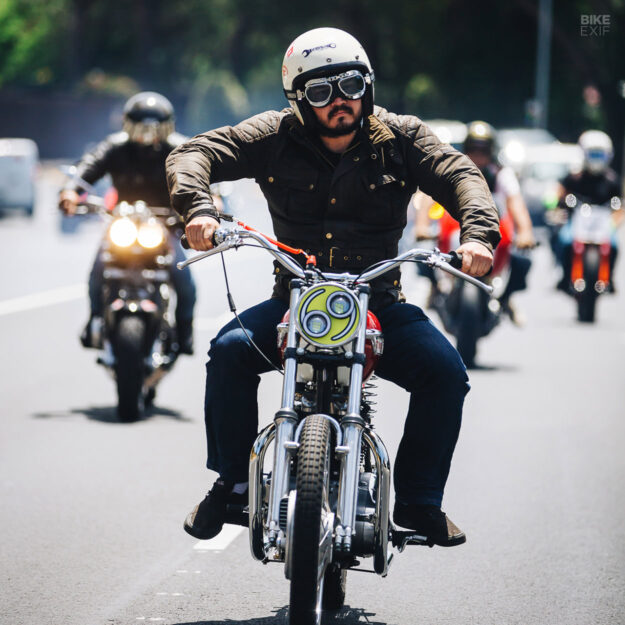