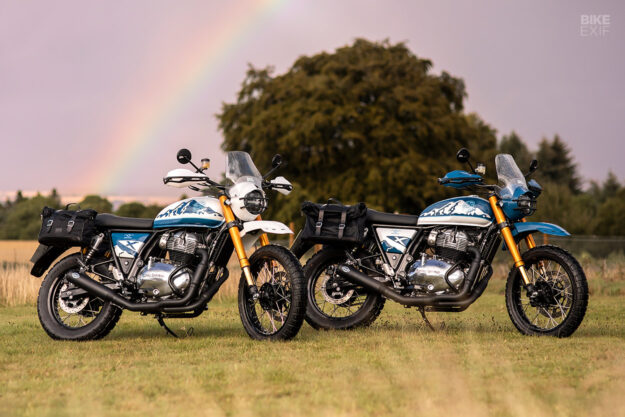 Royal Enfield is one of few OEMs with a healthy, ongoing custom motorcycle program. Sometimes they farm their projects out to the scene’s brightest stars—but sometimes they like to get their own hands dirty. With a dedicated in-house team, and the chassis experts Harris Performance under their corporate umbrella, they tend to get good results too.

For their latest project, Royal Enfield collaborated with Bikerbnb to create the two handsome scramblers you’re looking at here. Based on the twin-cylinder Interceptor 650 (or INT650, if you’re in the US), the bikes are designed to traverse the roads and trails of the Scottish Highlands, in style. 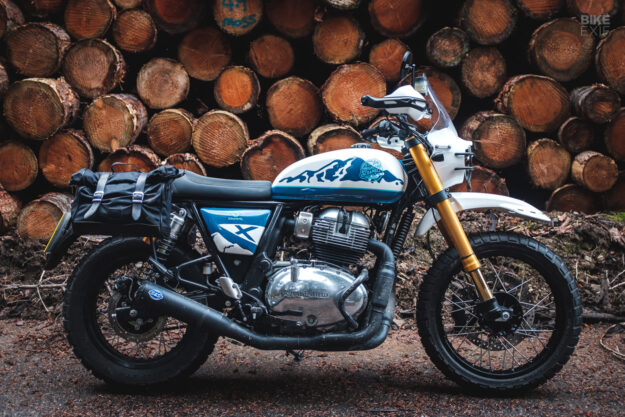 These Interceptors are more functional than they are flashy, but there’s a good reason for that. Bikerbnb offers guided tours around the Scottish Highlands and, as of recently, Catalonia, Spain. Their fleet consists entirely of Royal Enfield singles and twins—so they know what works, and what doesn’t.

“The Team at Bikerbnb are market leaders in their field, and deeply knowledgeable about the demands that their tours place on any motorcycle and their respective riders,” says the head of Royal Enfield’s custom program, Adrian Sellers. “Taking their local insight, combined with our own long brand heritage of adventure touring, we were able to work with a number of our close partners to ensure the ‘Highland Scramblers’ are 100% fit for purpose.” 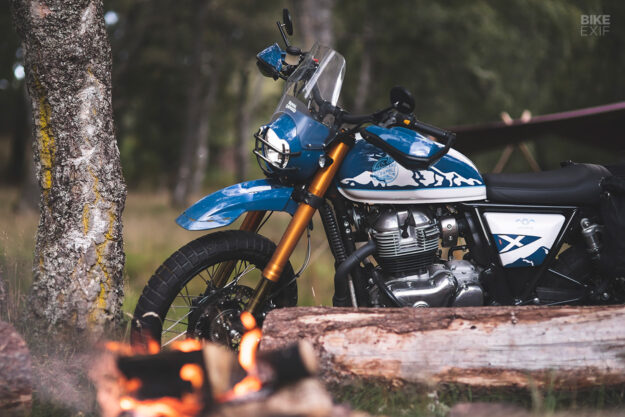 Many custom ‘scramblers’ are really just road bikes with adventure tires on, but Royal Enfield took this project a little more seriously. They didn’t just make the Interceptor 650 look like it enjoys a bit of dirt, but properly reworked its geometry and running gear too.

You’ll find fresh Öhlins suspension at both ends, re-valved and tuned to optimize travel, with a set of bespoke yokes from Harris Performance. The Harris crew also installed a custom offset headstock bearing cup to increase the rake, and a custom front spindle bush to reduce the trail—all to create more off-road stability. 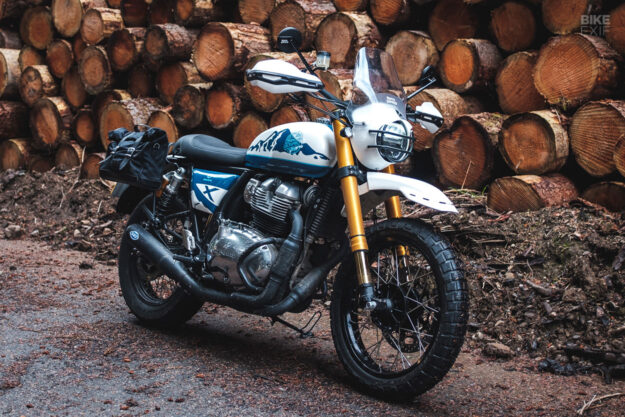 The original 18” wheels were swapped out for a 19F/17R set, built up with Hagon rims, stainless steel spokes and nipples, and Pirelli Rally STR rubber. The Interceptor’s front brake was upgraded with a Brembo P4 four-piston caliper. Since there’s only one brake, the caliper mount on the opposite fork leg was shaved off for a cleaner look.

Next, Royal Enfield and Harris Performance did a little fine-tuning. The tank was nudged ever so slightly backwards, to increase the bike’s steering angle clearance. And the side stand was extended to compensate for the increased ride height. 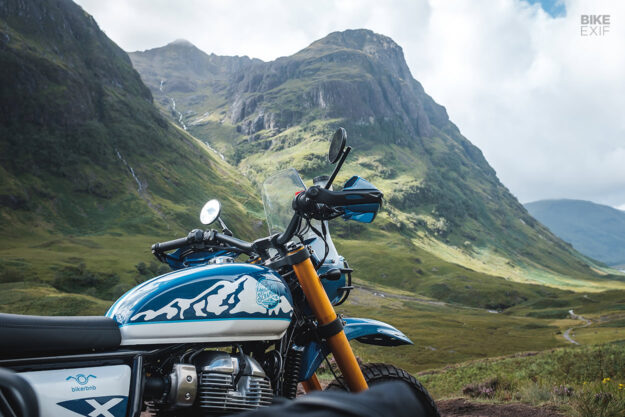 The rider benefits from a set of high-rise ProTaper EVO flat track handlebars, clamped by Harris Performance risers. They wear custom-made hand guards, and aluminum rear view mirrors from Royal Enfield’s own aftermarket catalogue. The brake and clutch controls are from Brembo, and are hooked up to extended lines for both.

The original switches were retained, but the dials were swapped out for a single compact Motogadget unit. There’s no key either—an RFID fob from Motogadget turns the bike on instead. 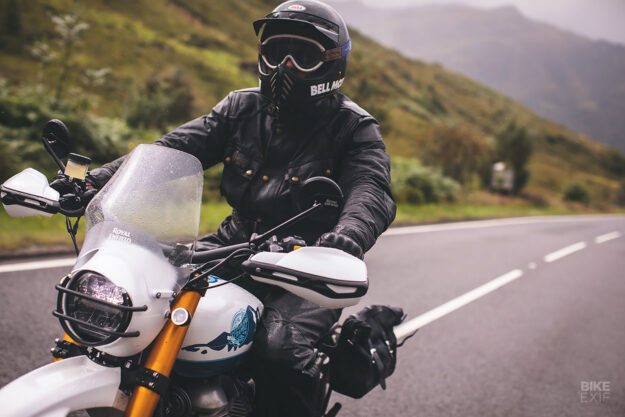 Poking out the front is a custom-made enduro-style fender. Just above it is a Koso Thunderbolt LED headlight, tucked into a 3D-printed nacelle and protected by a handmade grill. If the windshield looks familiar, it’s because Royal Enfield lifted it off their own Himalayan dual-sport.

Further back sits a custom-made gel seat from Tom Hurley. It’s been built for one, with a new luggage rack mounted where a passenger would normally be. Hanging off it is a set of stylish saddlebags from Longride. 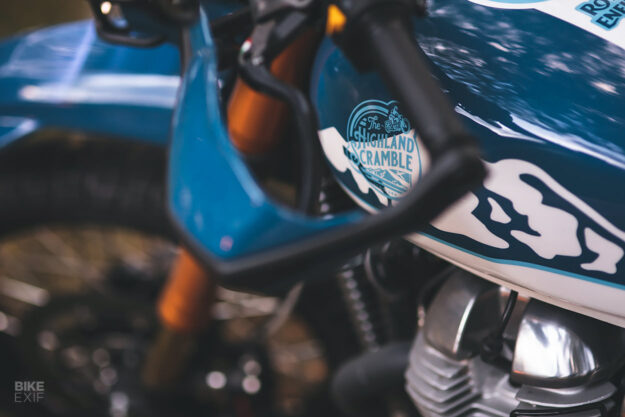 Finishing kit includes Kellermann turn signals at both ends, with the rear doubling up as taillights. There’s also a custom rear fender extension that also holds the license plates, and crash bars and bobbins from Royal Enfield’s stash.

A bunch of parts were finished in black, using the increasingly popular Cerakote coating. You’ll find it on the exhaust system too—a low-slung two-into-one system from S&S Cycle in the States. 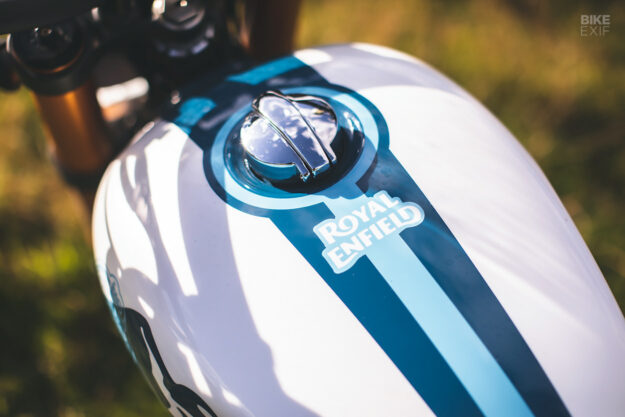 Dressed in inverted blue-and-white liveries, these two Interceptor 650s are effortlessly cool. And given how easy Enfield’s twin-cylinder bikes are to ride, we’d imagine they’d be sublime to cruise through the Scottish Highlands on.

Royal Enfield will be showing Bikerbnb’s new rides off at the EICMA trade show this week. If you’re in town, head on down and tell them how badly we’d all like them to put something like this into production. 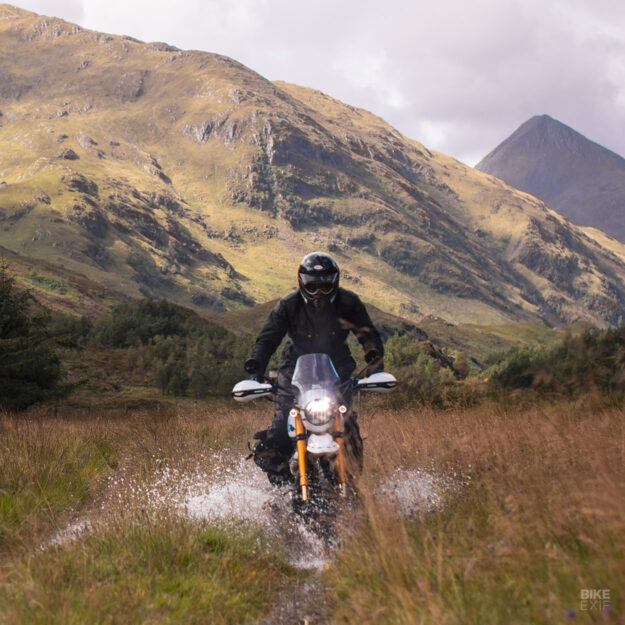