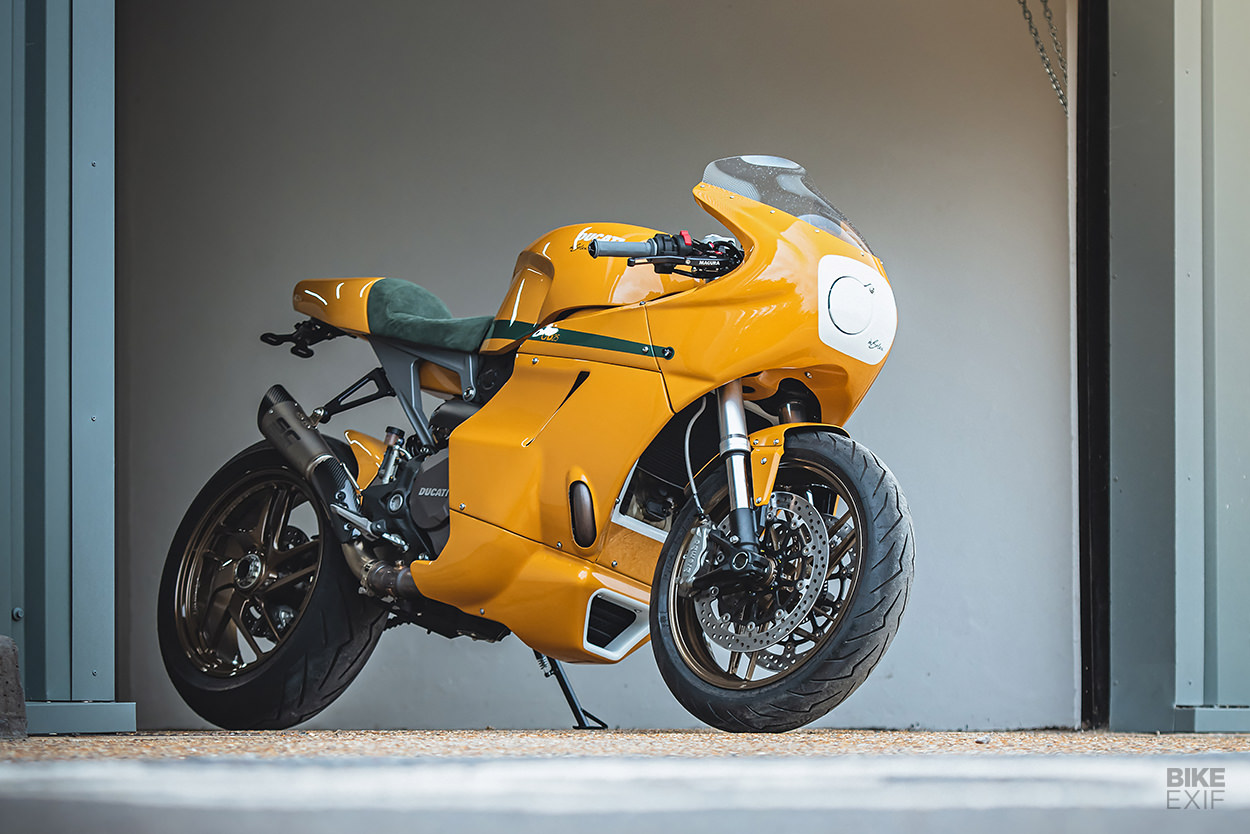 We’ve always had a thing for the machines that roll out of the deBolex Engineering workshop: they’re sleek, fast and exceptionally well made. Unfortunately for most of us, perfection at this level takes a long time to create, and deep pockets to purchase.

Shop founder Calum Pryce-Tidd and his right-hand man Des Francis have now switched their attention to a series of bikes with a limited production run. The series is based on the 147 hp Ducati Monster 1200 and, as the name suggests, just 25 will be built. Ten have been ordered already. 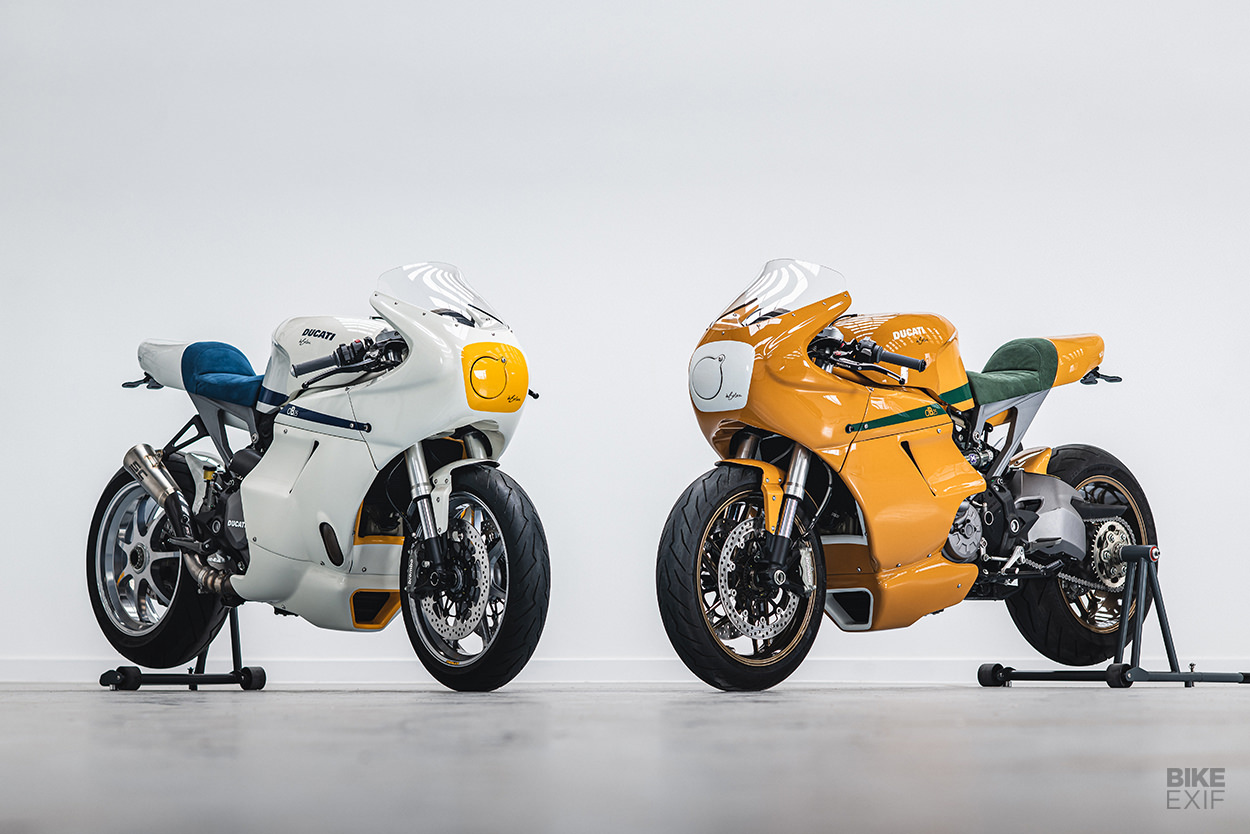 The principle is similar to what Singer is doing with Porsche 911s: the riding experience is elevated with higher spec components, and owners can tailor the machines to suit their tastes. The build time is around four weeks from the start of work.

The two dB25s built so far look every bit as good as previous deBolex creations, with millimeter-perfect (and timeless) styling. The yellow bike is the prototype, with aluminum bodywork as the template, but the following 24 bikes will use even lighter carbon fiber. 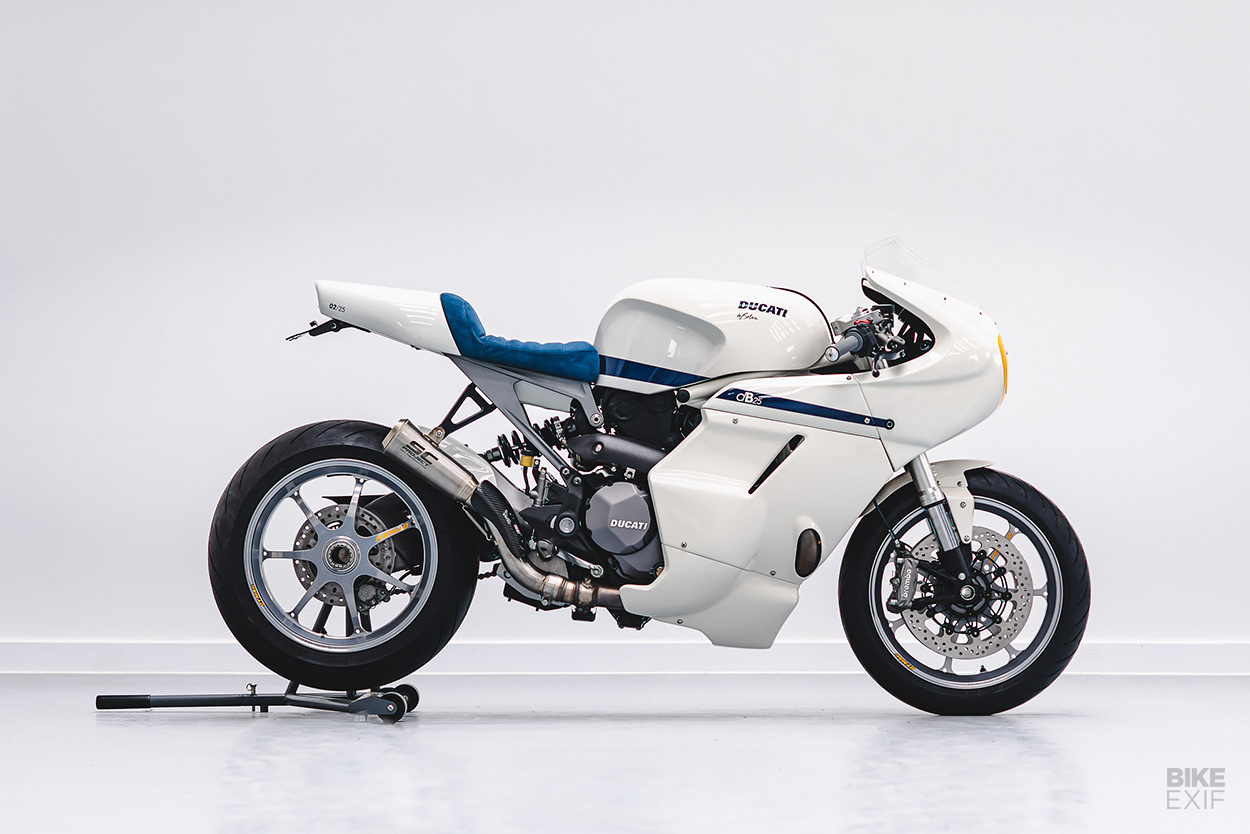 “Our goal was to create a full fairing ‘retro racer’,” says Calum. “The one-off projects allowed us to develop skills and techniques that we’re now applying to the dB25 series.”

“The prototype was developed over a year and a half,” he adds, “and we’ve now begun production of the first carbon fiber bikes.” Each motorcycle in the series will be made to order, with an extensive range of specifications and finishes to choose from—so no two will be the same. 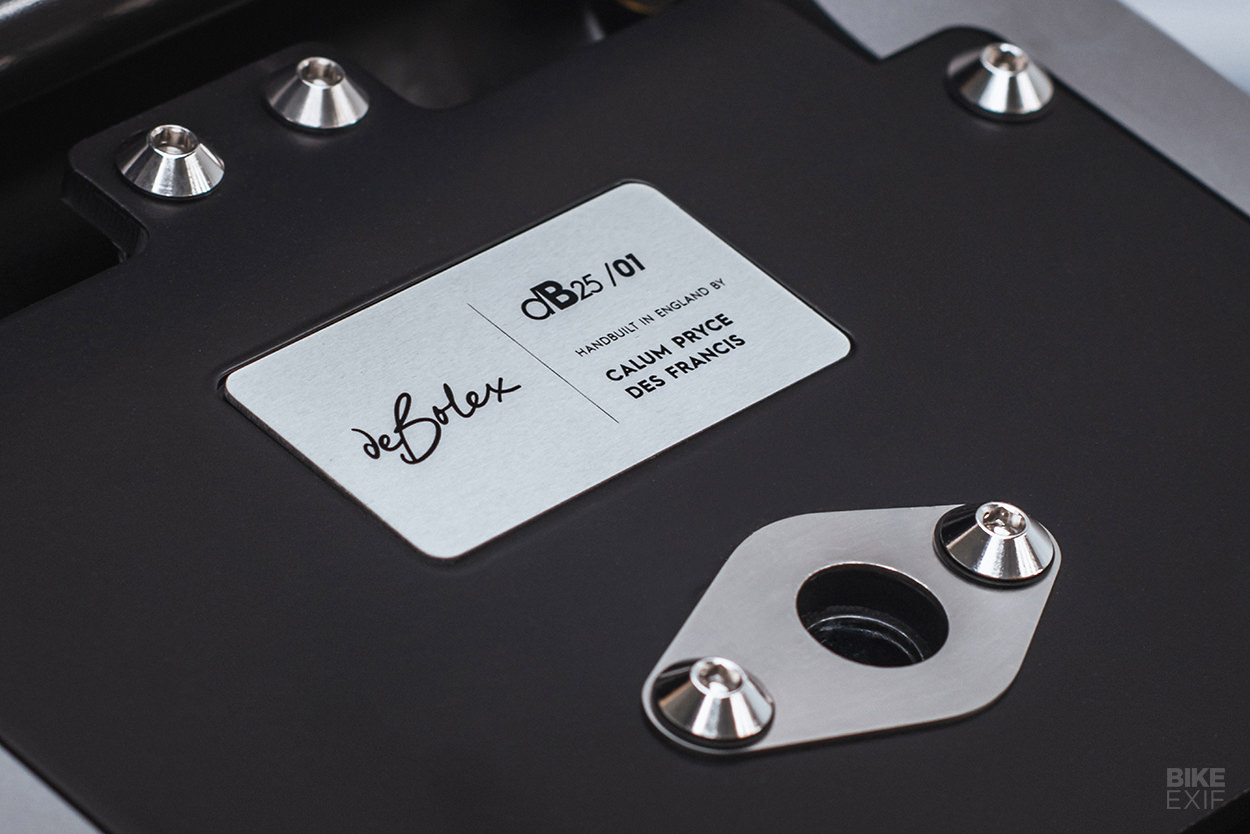 This makes good business sense in today’s climate. The one-off projects took a huge amount of development, and it seemed a shame to produce just one bike. “With the series, we can develop the prototype in a similar way—but spend a relatively short time creating all the tooling to reproduce it,” says Calum.

“And then we’re set up to create as many as we can handle.” As an example, the dB25 molds mean that deBolex can produce a tail section in under two days. 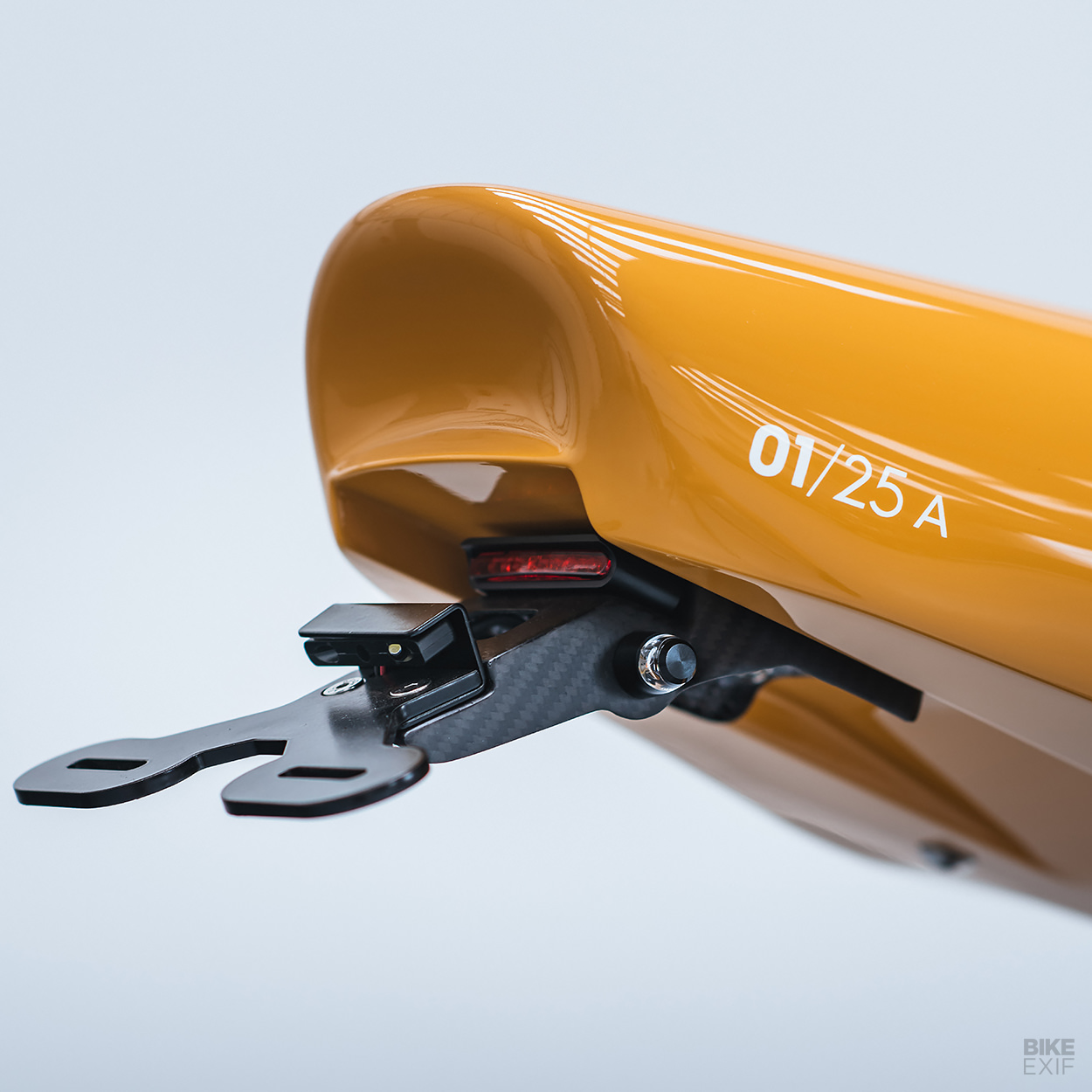 Each one of the Monster 1200 donor bikes will be extensively modified with more than a hundred new components. These include a lightweight aluminum rear subframe, a polymer fuel cell, and no less than 21 carbon fiber panels. There are also 60 laser-cut sheet metal parts, and 22 CNC aluminum components.

Virtually every visible component is new, apart from the frame and the magnificent 1,198 cc Testastretta engine. 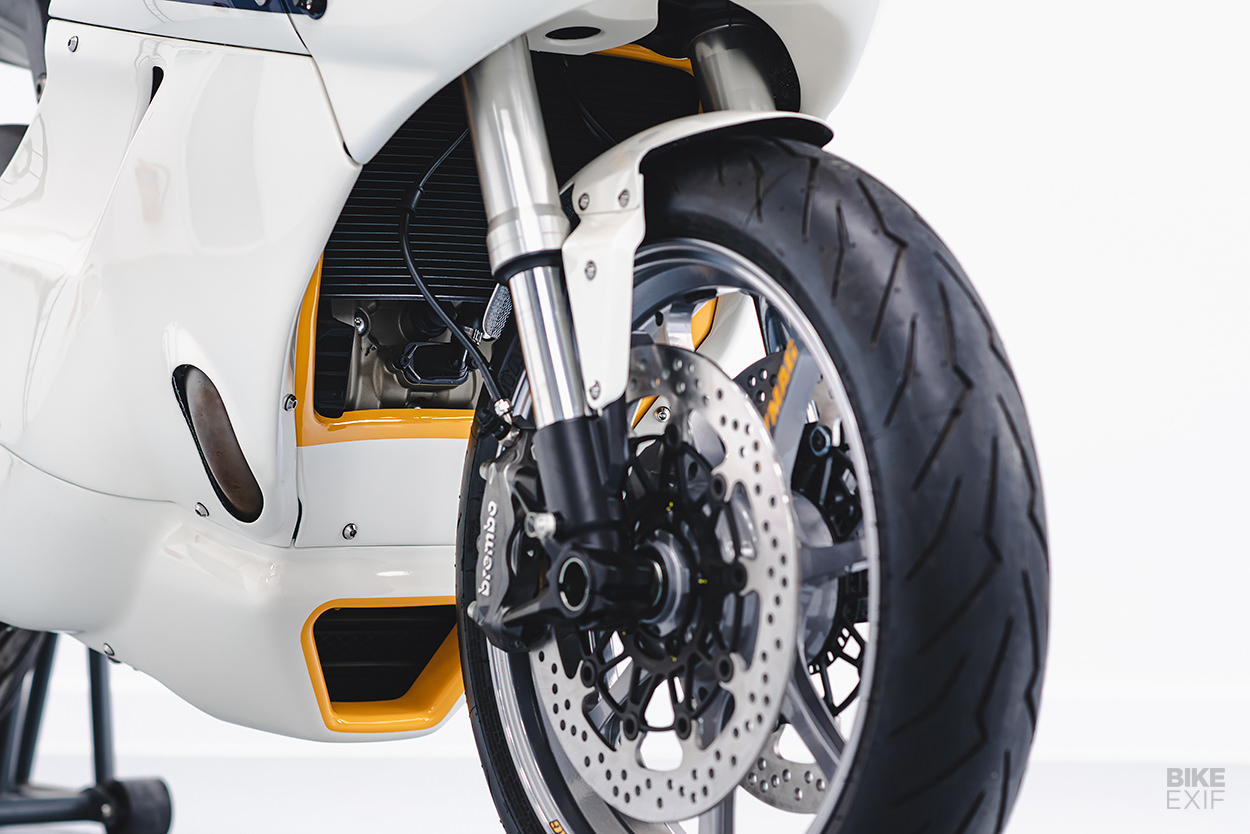 It’s a big job—even bigger than the effort involved in deBolex’s most complicated one-offs. “Creating a low run production is a very different ball game,” says Calum. “Jigs and tooling had to be made, so we could accurately recreate each dB25.”

“We wanted to carry out all the work in-house, from the design and metal shaping right through to the carbon fiber, paint and seat trimming. This enables us to keep build quality levels to a high standard and create the perfect marriage between all the components.” 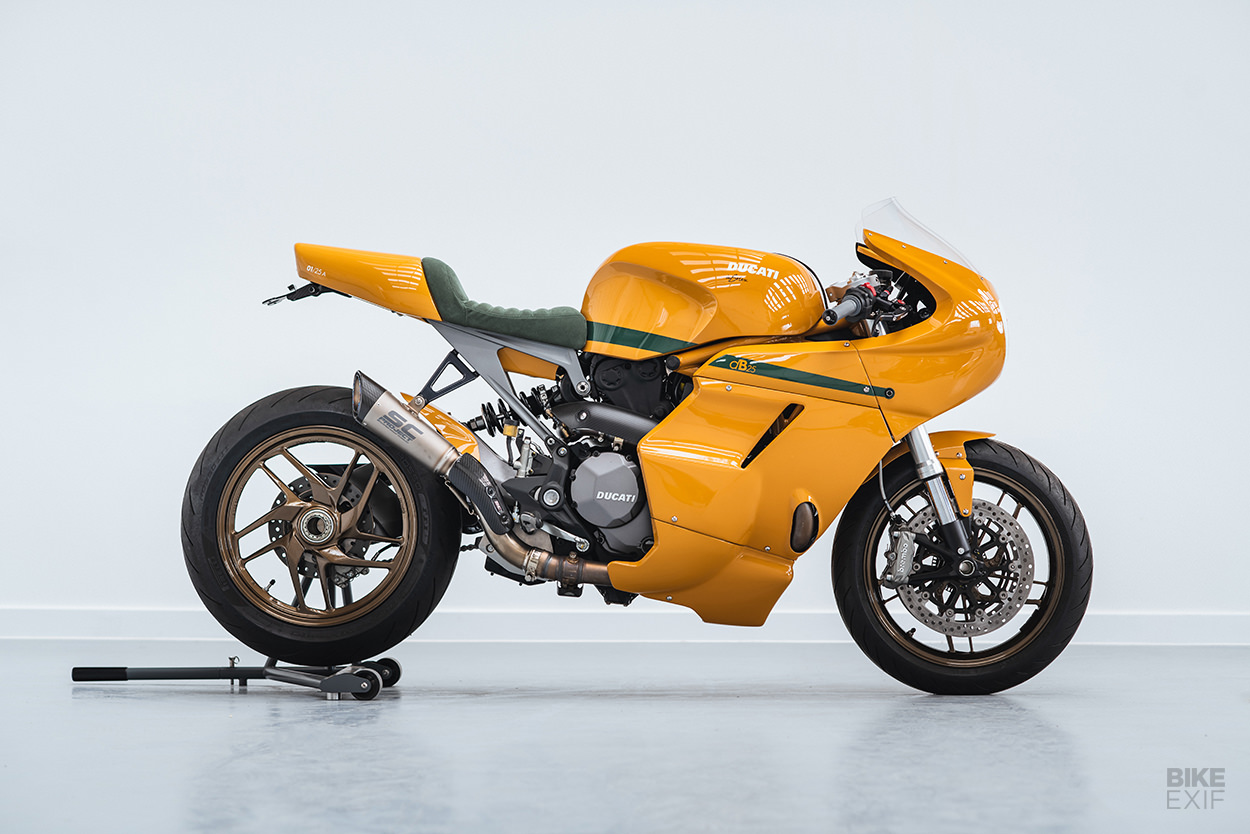 The new tank is a good example. The ethanol in petrol will eat into the resin of a carbon fiber tank, so Calum and Des created a mold for a polymer fuel cell. It’s strong and durable, as well as lightweight. This tank then has a carbon fiber skin fitted over the top.

The new aluminum subframe bolts straight on, which was one of the reasons that Calum chose the Monster as the base. The subframe incorporates a quick release seat system and glove storage box, and is finished with a thin-film layer of Cerakote. 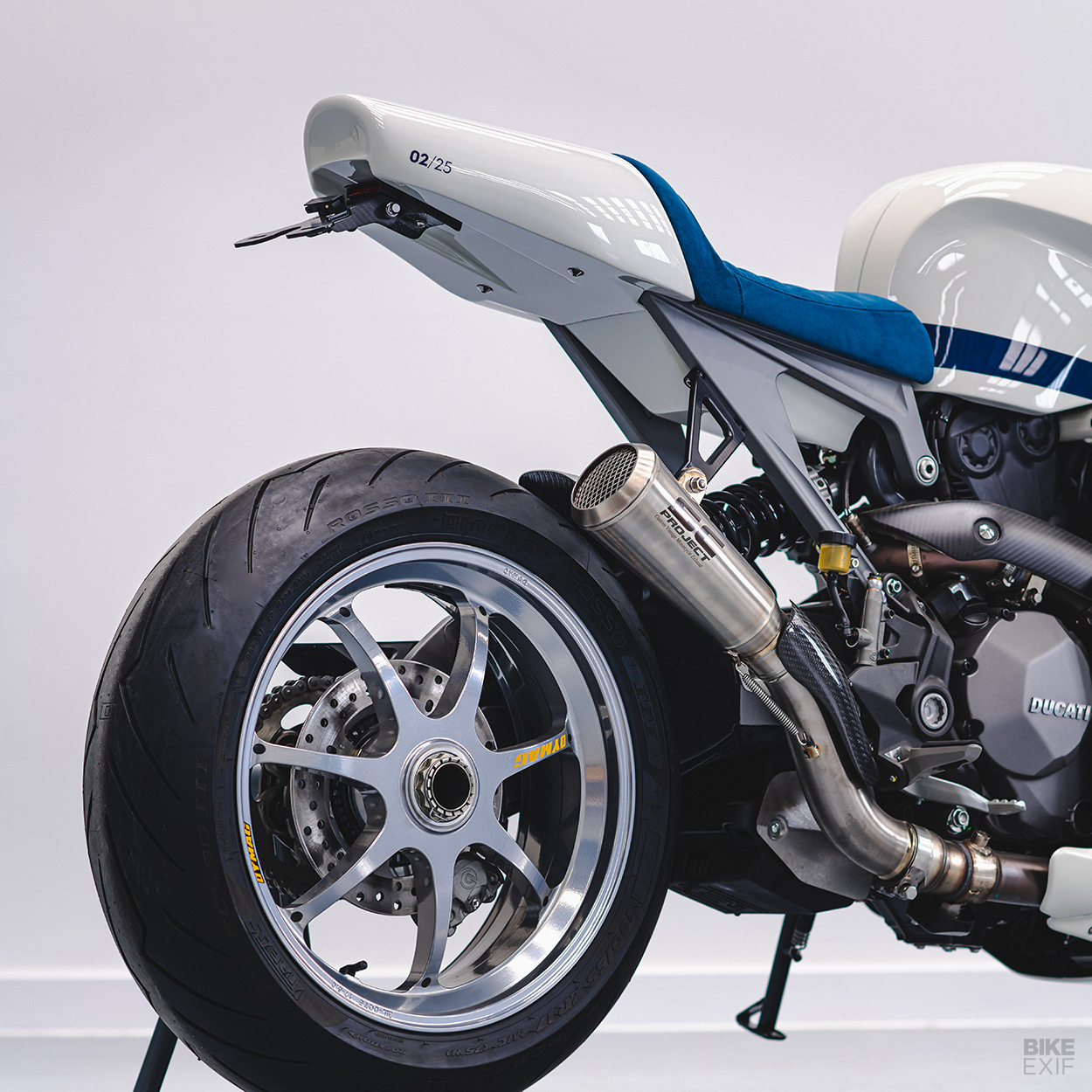 Clever tail units are a deBolex signature, with comfortable seats and sleek but practical designs. For this series, Calum and Des have produced a seat foam mold so they can consistently produce an accurate fit for the base, and control the density of the foam. For the upholstery, customers can choose from different fabrics and trim patterns.

The excellent suspension was another reason to choose the Ducati. But if required, deBolex will upgrade the monoshock to a Maxton RT10 unit with a custom reservoir mounting bracket. (Customers requiring the very best front suspension can specify the Monster S as the base bike, with 48 mm Öhlins fully adjustable USD forks.) 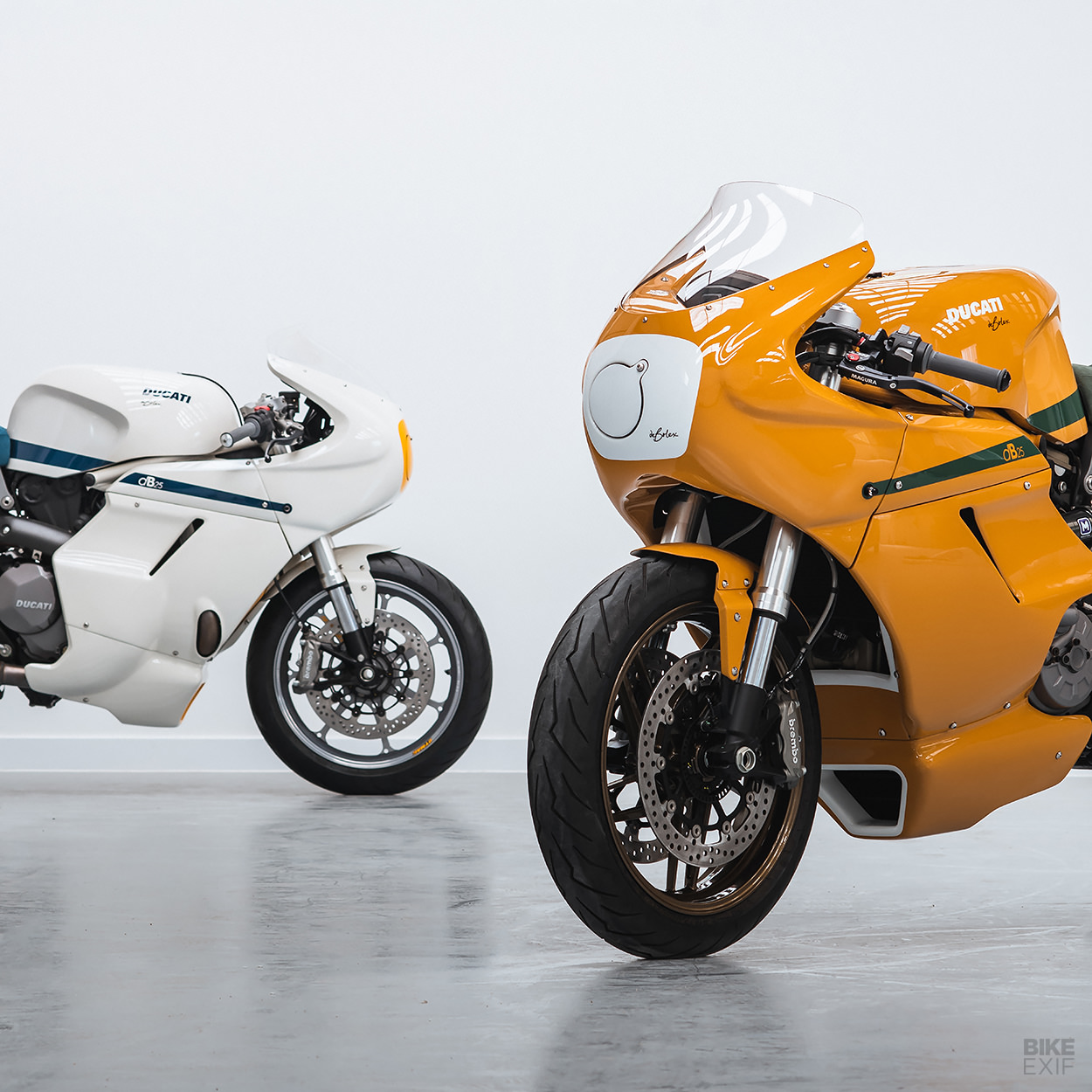 The top yoke is custom, with a built-in speedo mount, and houses Gilles clip-ons with Renthal grips. The standard Brembo master cylinder can be upgraded to Magura HC3s (as seen on the yellow prototype).

Calum has made light modifications to the main frame, to accommodate the new fairing brackets and to clean up the lines. New mounts have been fabricated from laser-cut steel and aluminum, and customers can match the frame color to their chosen body color—or get it finished in black or silver powdercoat. 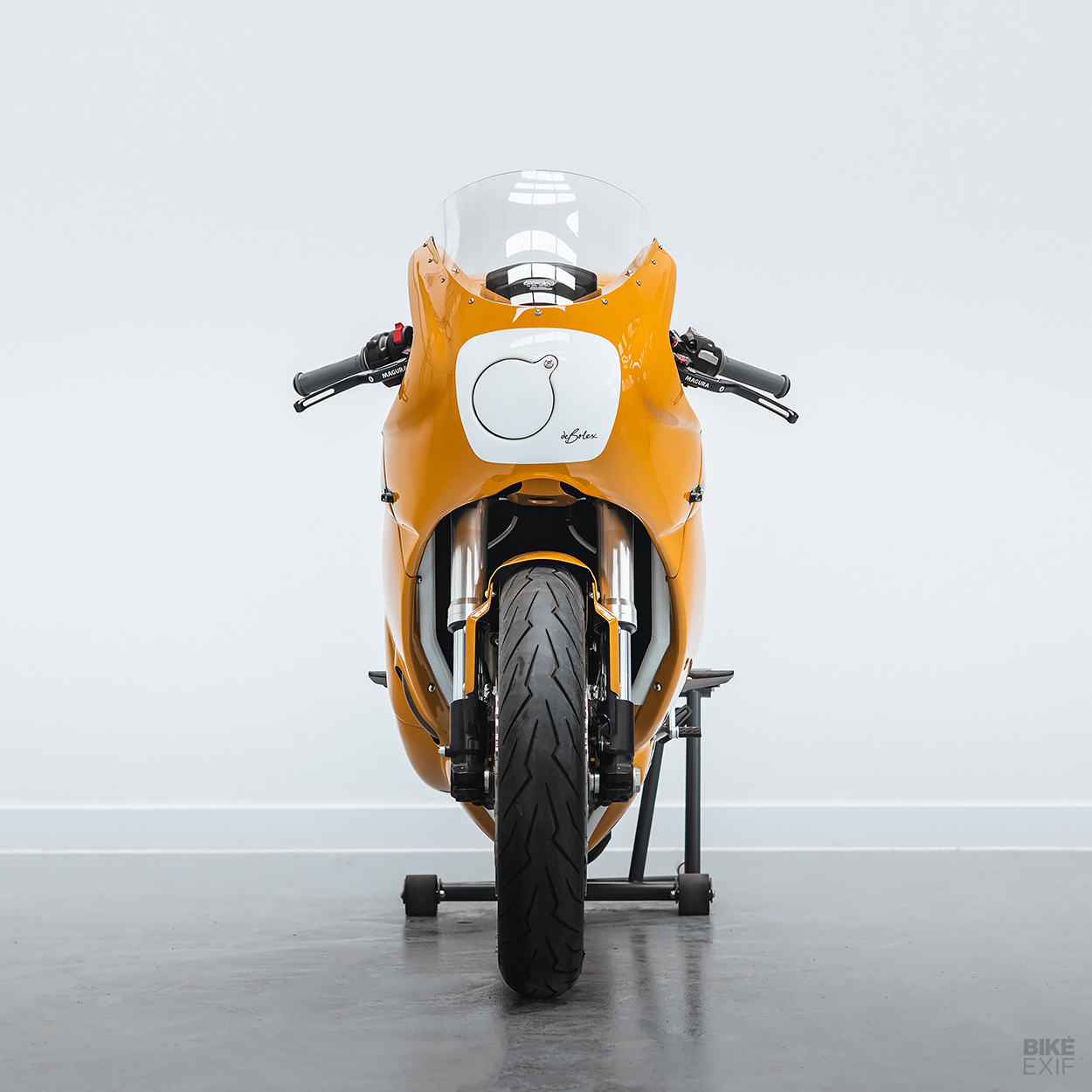 The neat headlight cover is one of our favorite elements on the dB25, and it’s offered as an option. It’s similar to the design used on deBolex’s Triumph Thruxton, with a quick-release fixing. “It can be stored under the seat in a protective cloth bag,” says Calum. “Its simplicity of use can transform the bike in a few seconds.” 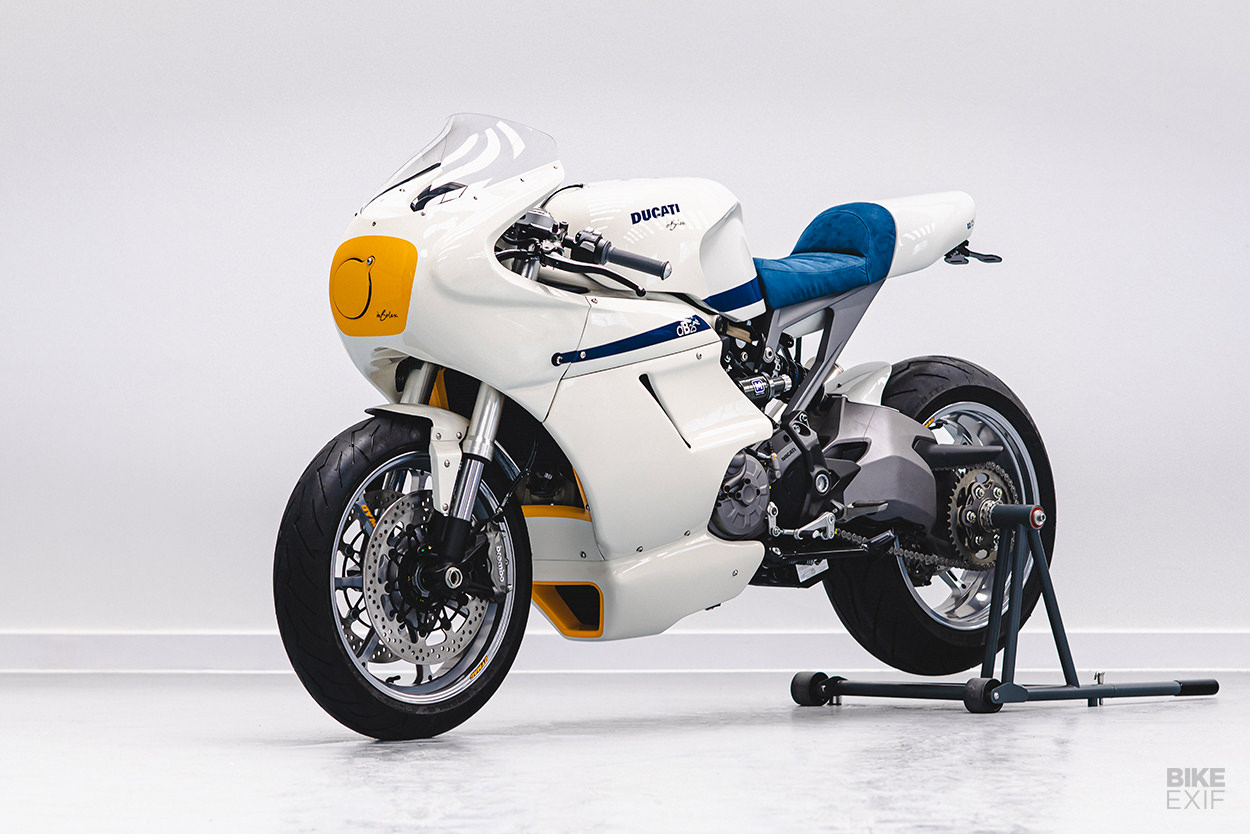 For colors and frame finishes, the sky is almost the limit. Even the wheels are stunning: the white bike is featuring Dymag’s new single-sided UP7X forged aluminum rims, and customers can also get paddock stands painted to match their bike.

“When choosing the specification of the bike it’s the customer’s turn to add their stamp to our vision,” says Calum. “They can have as much—or as little—input into this stage as they’d like. If they want to make the final decision on every component listed, we encourage them to do so. If they would rather we took the reins, or help guide them through, we can do that too.” 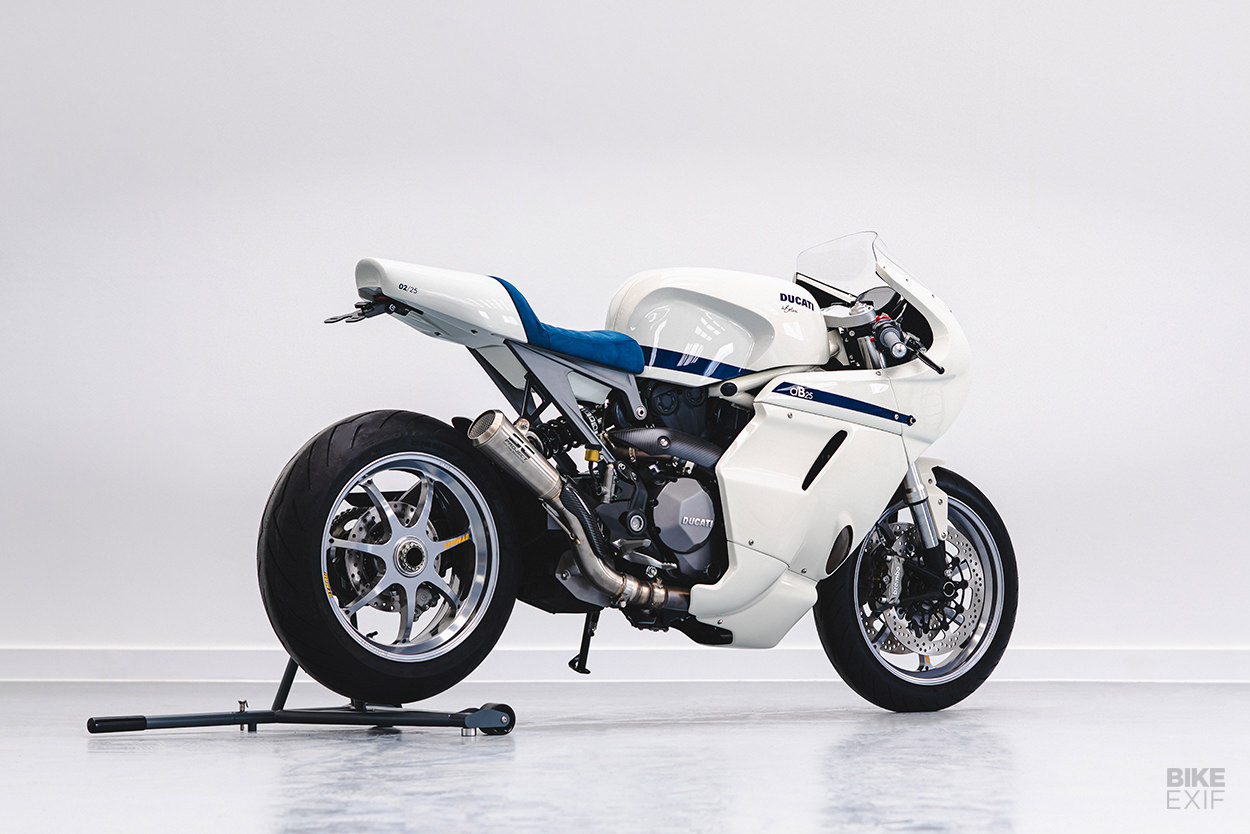 Calum encourages customers to give him an idea of which colors they’d like to see for the final finish. He then uses this to come up with a palette that complements the classic lines of the design. 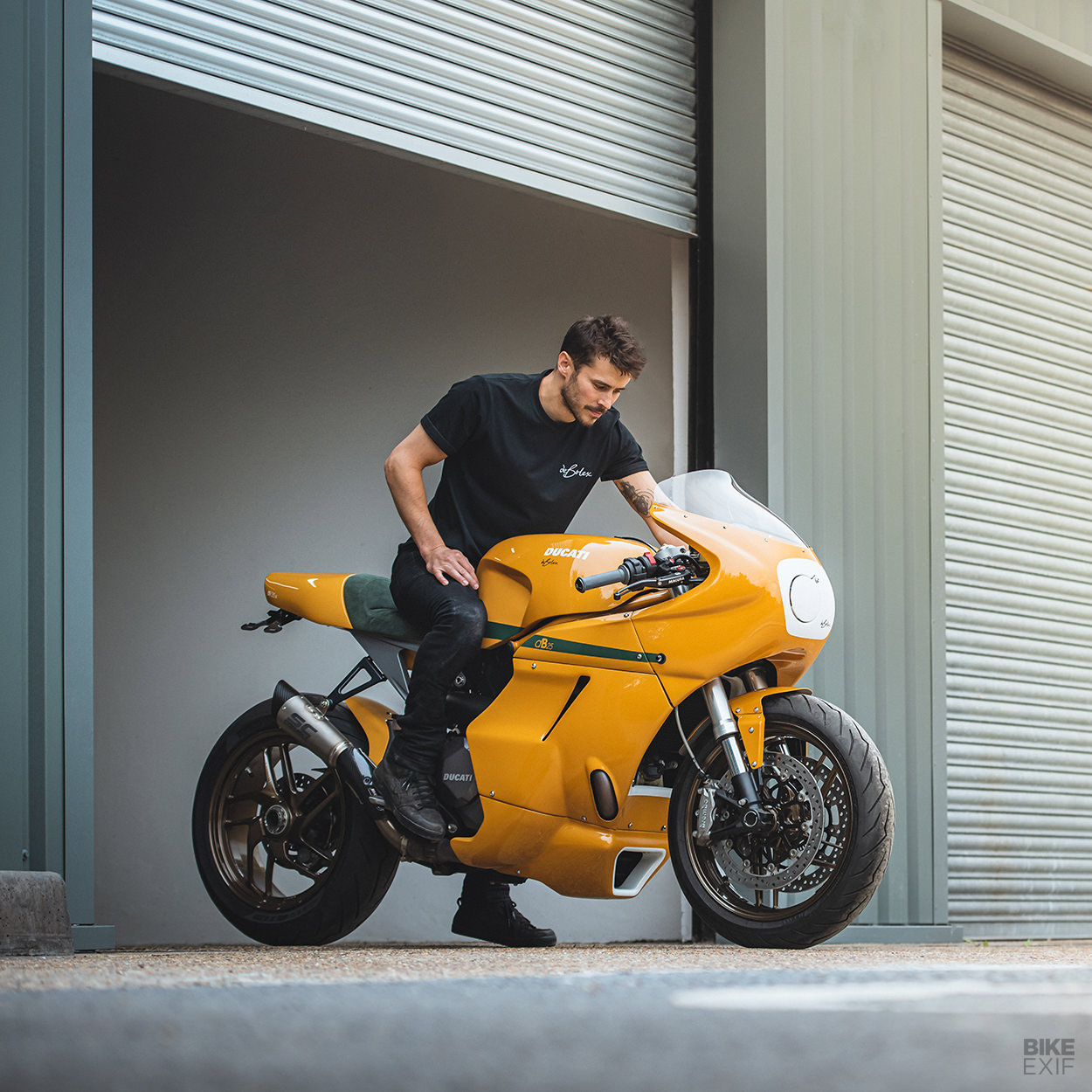