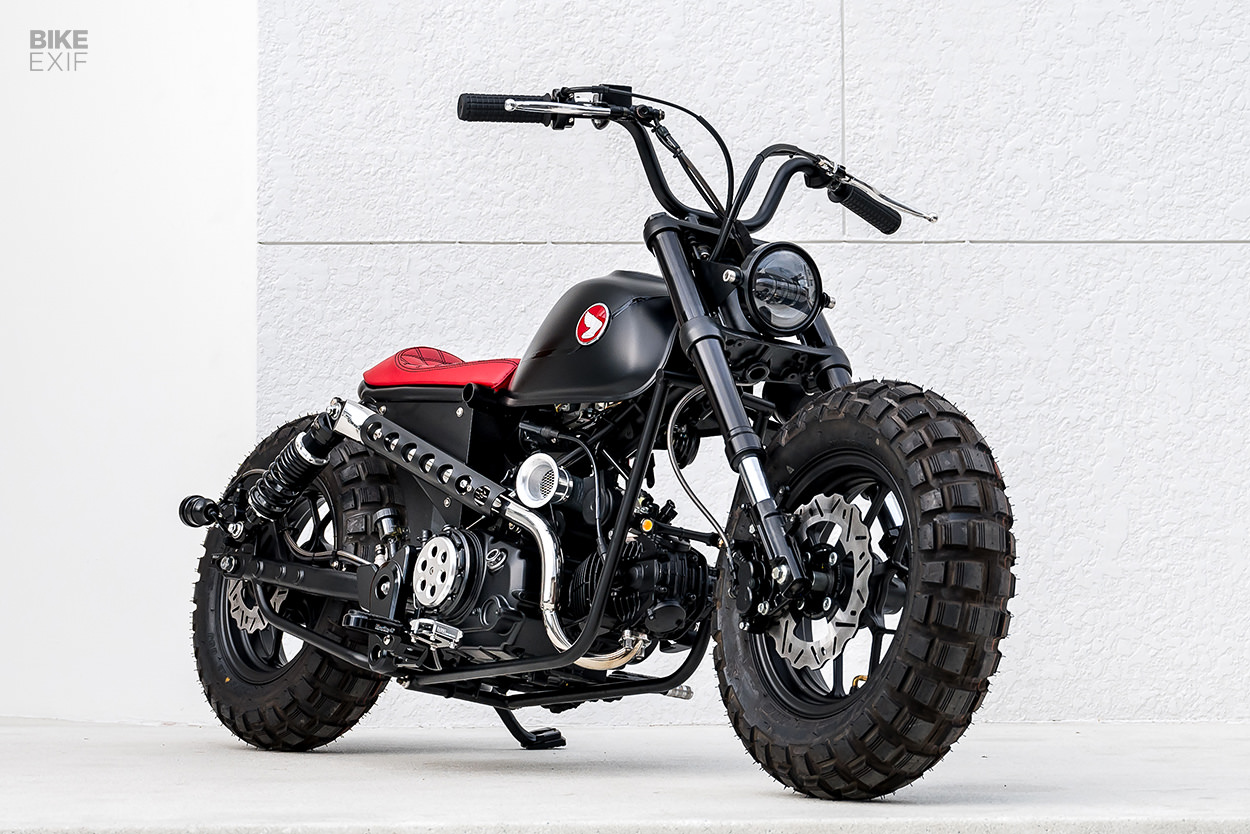 K-Speed are well versed in the art of customizing pint-sized Hondas. We’ve seen them turn a Monkey into a cafe racer, and a Super Cub into a scrambler. Now they’ve put their wild imaginations to work once again, and built a slammed Honda Monkey bobber.

Released three years ago, the modern Monkey is based on Honda’s equally cute Grom—combining 1960s styling with modern amenities like fuel injection and disc brakes. With a 125 cc motor that puts out a whopping 9.2 hp, and a top speed of 56 mph, it’s hardly potent. But it’s popular as heck right now, because nostalgia. 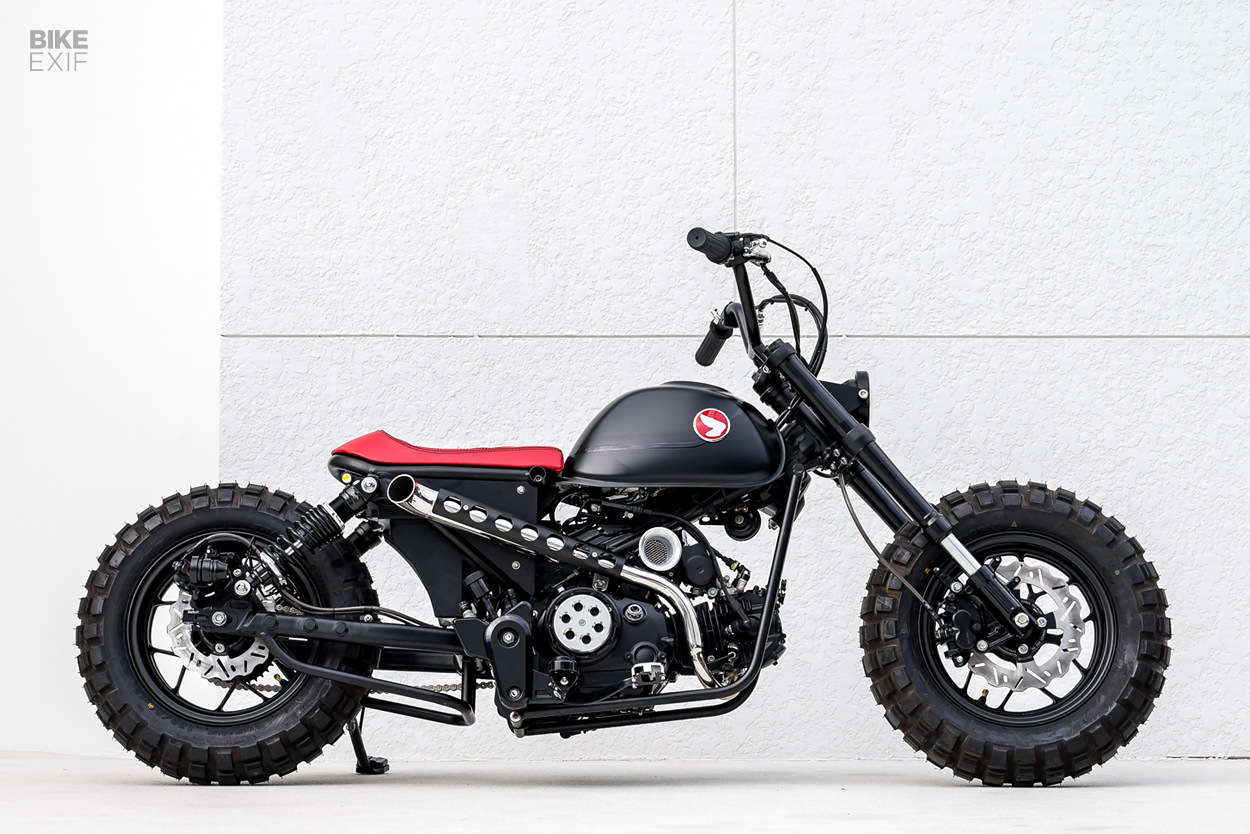 K-Speed’s ‘Monkey Bomber’ is based on a brand new 2021-model Honda Monkey, and taps into both the Bangkok shop’s extensive range of aftermarket parts, and their fabrication know-how. Despite its diminutive size it’s a hard-hitting custom—and it’s brimming with clever mods.

The big hook here is the Monkey’s radically slammed stance. K-Speed have modified the steering head to rake out the front forks, and bulked up the chassis with a pair of new frame downtubes. The forks look longer than stock, but they’ve actually been shortened by an inch and a half. 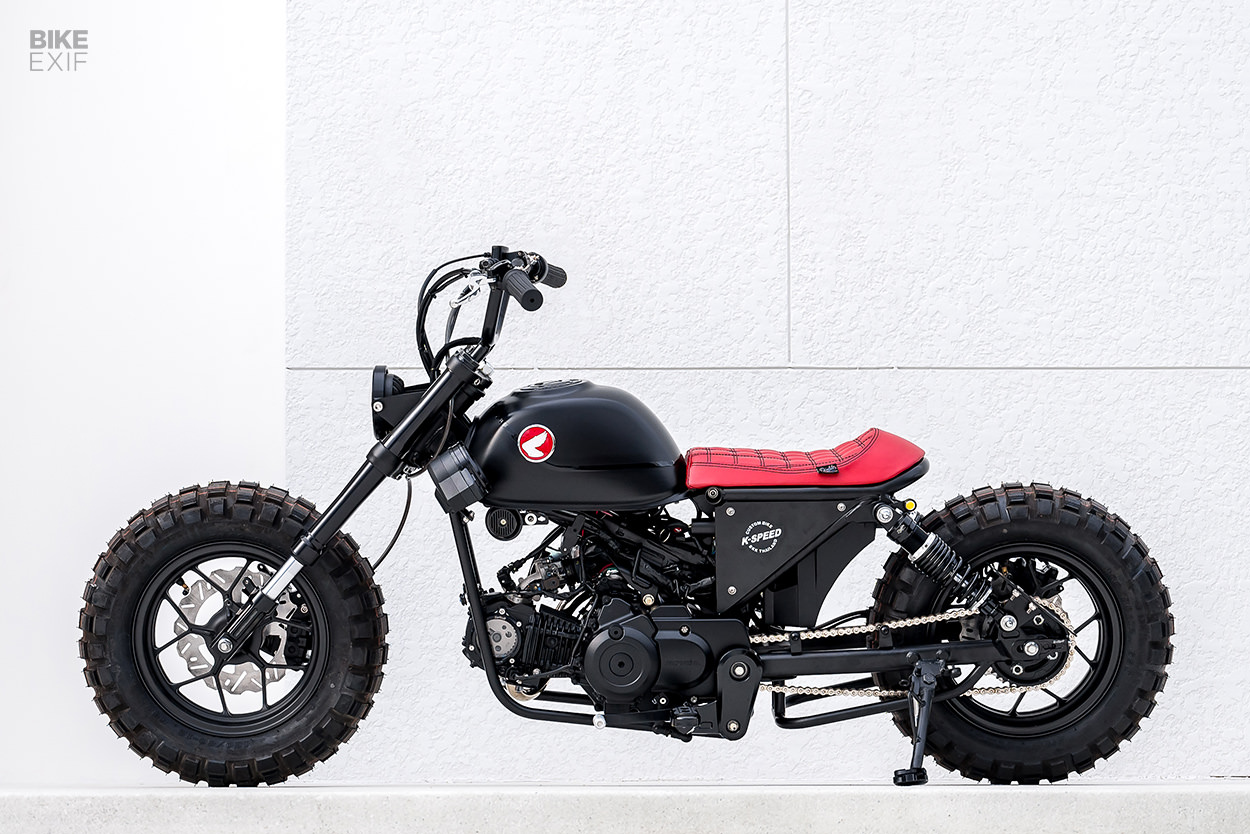 Out back, the crew extended the stock swingarm, then welded in a brace underneath it. They kept the stock wheels to hint back to the original bike, but wrapped them in chunky 12” knobbies. The short rear shocks are from K-Speed’s own Diablo range of parts.

Higher up, K-Speed cut and looped the subframe, then capped it off with a custom leather seat. There’s also a side-mounted license plate bracket out back, and a new side-stand, mounted to the swingarm. 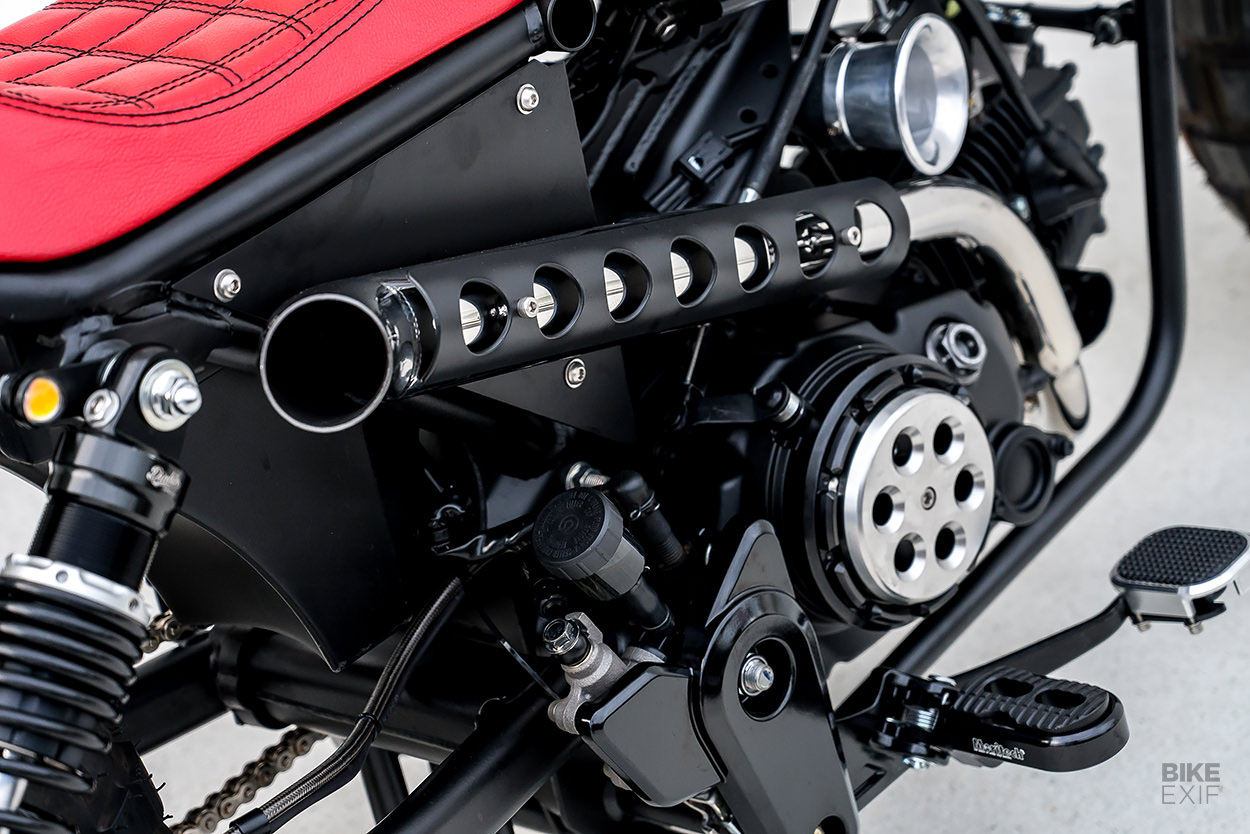 Moving to the motor, the team ditched the airbox for a custom intake with a velocity stack. They fitted some engine dress-up parts too; a drilled clutch cover on the right, and a transparent crankshaft cover on the left.

The Monkey’s bulbous exhaust went into the bin, replaced by a custom chromed system with internal baffling and a new heat shield. 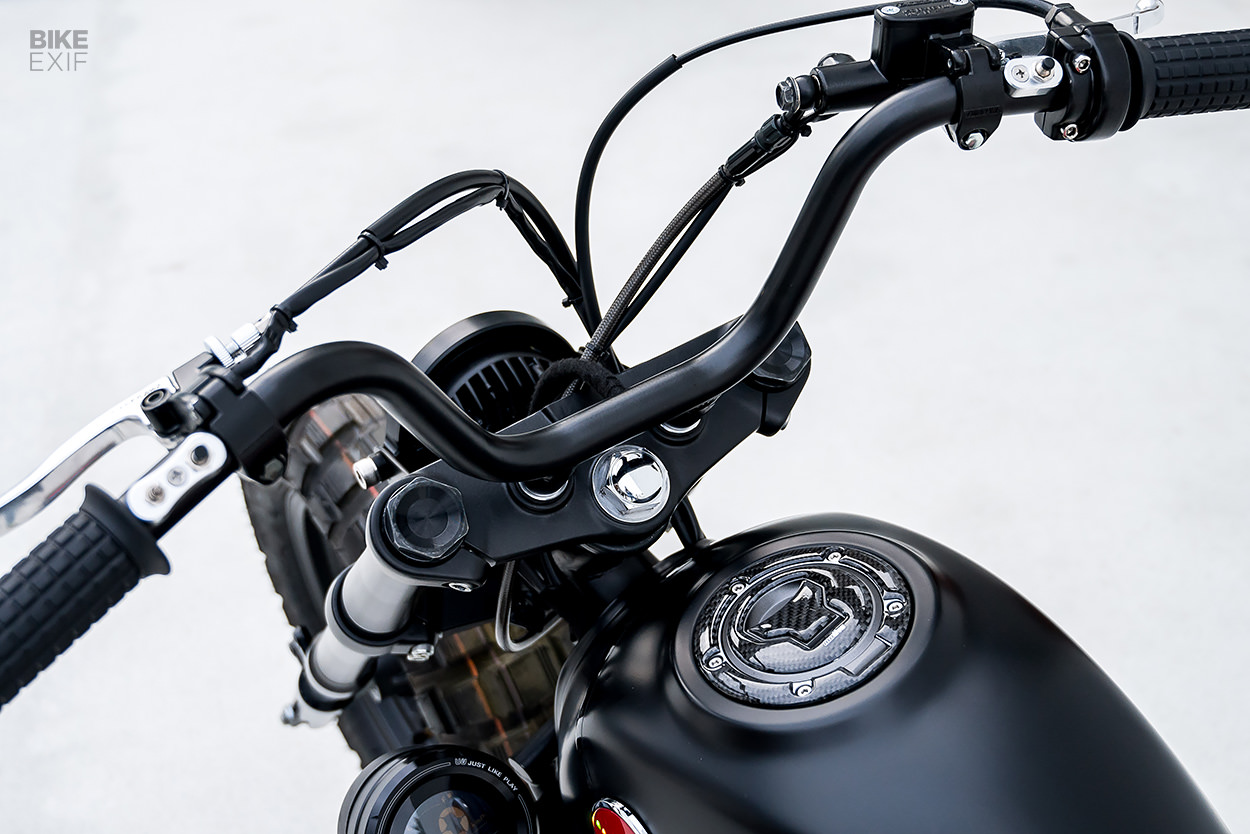 K-Speed is Thailand’s biggest supplier of aftermarket bike parts, so putting the cockpit together was a cakewalk. They bolted on a new set of mini-ape hangers, fitted with K-Speed grips, levers and mini-switches. The speedo was relocated to a custom bracket to the left of the tank, and its chrome bezel was swapped for a black machined item. 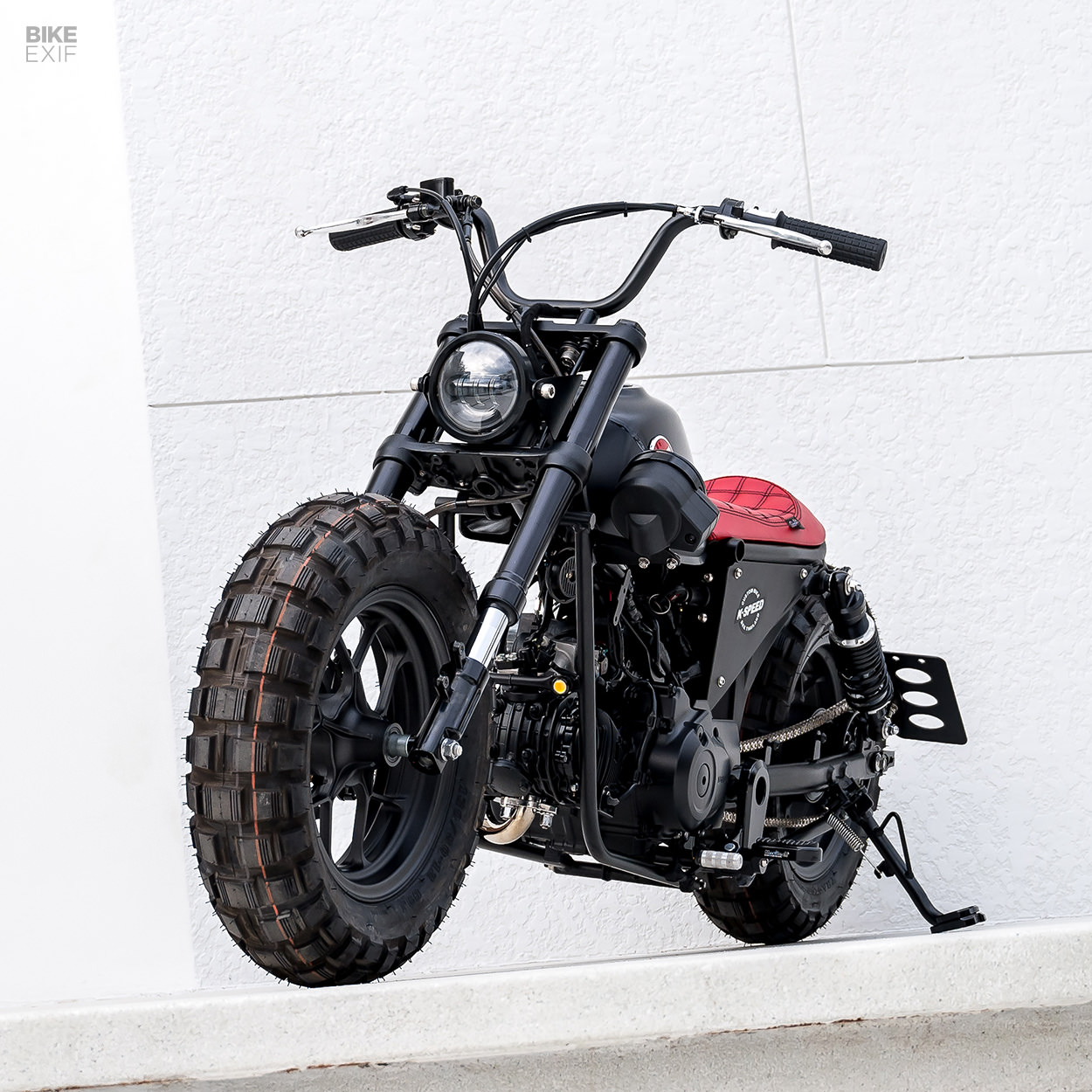 Out front is a new LED headlight. LED turn signals are mounted on the new frame rails in the front, and on tabs on the reworked subframe at the back. The taillight’s another Diablo catalogue part, and sits on a bracket mounted off the lower shock mount.

Rounding out the parts spec are wide Moritech foot pegs, along with a carbon fiber gas cap. A pair of custom triangular side covers ties the bodywork together. 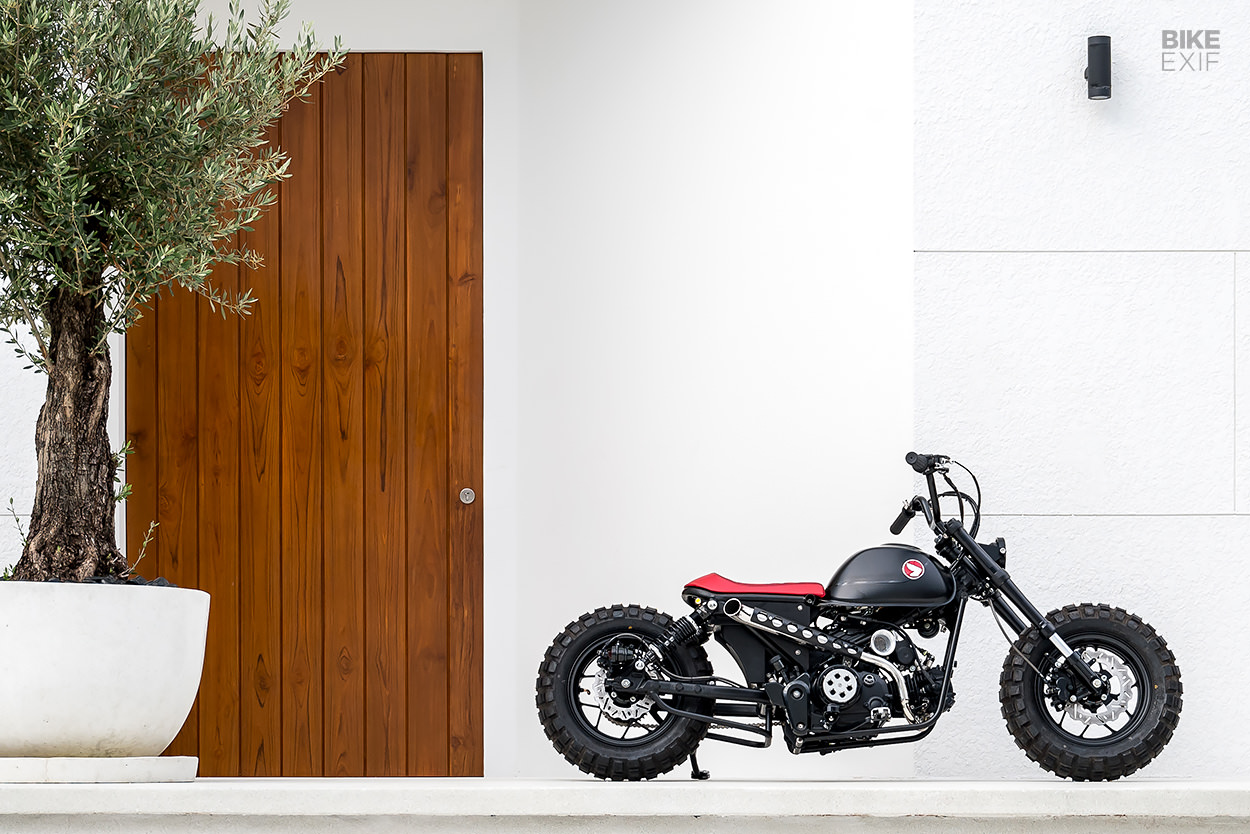 K-Speed left the OEM tank alone as a nod to the Monkey’s original design, and even kept the classic Honda tank badges. The tank’s been painted matte black with a gloss black stripe; the red seat and tank badges add the only splash of color to the otherwise murdered-out bobber.

All buttoned up, the Monkey Bomber is simultaneously impossibly cute and effortlessly badass. It obviously won’t be as quick or as comfortable as a full size bike—but it packs just as much street cred into a package half the size. And besides: who goes far and fast on a bobber anyway? 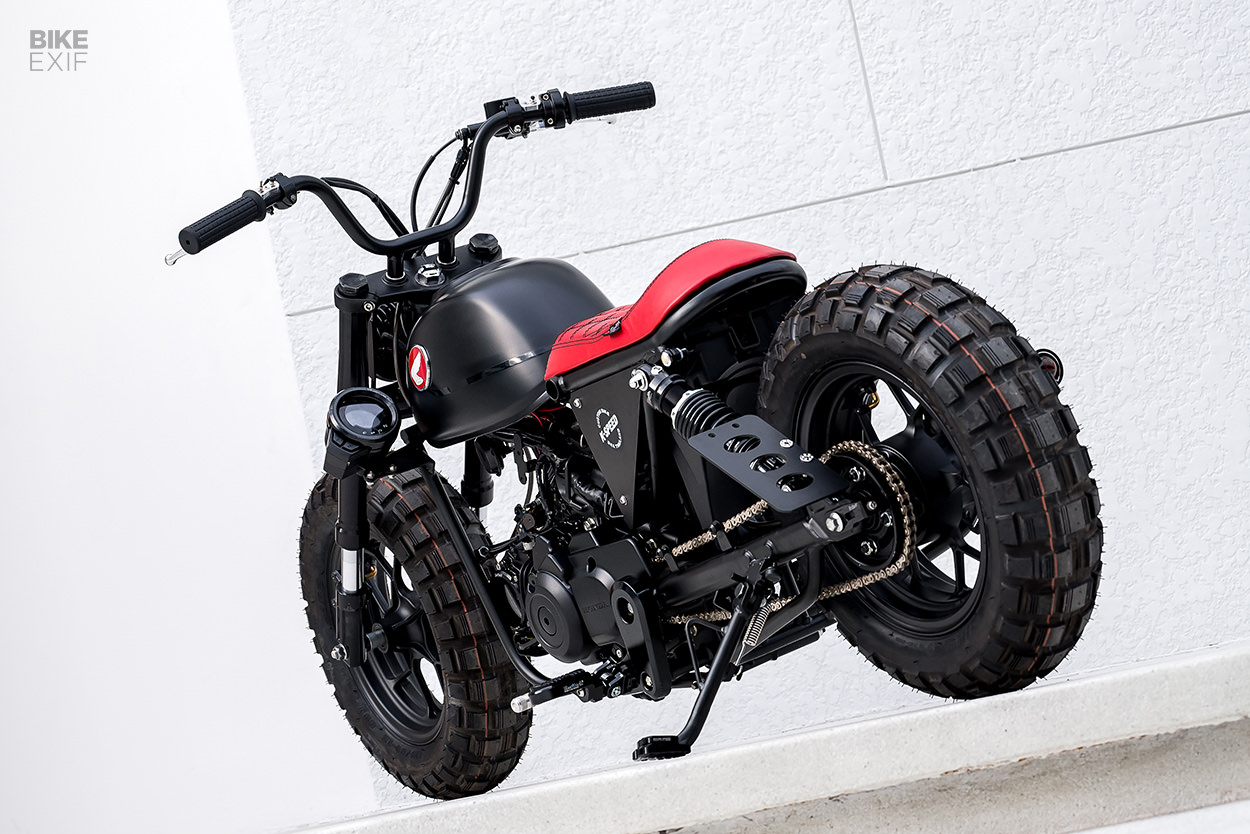 K-Speed’s previous success with the Honda Super Cub led them to launch a series of made-to-order builds with the same design. They haven’t ruled out doing the same with the Monkey Bomber.

We’d happily take one… would you? 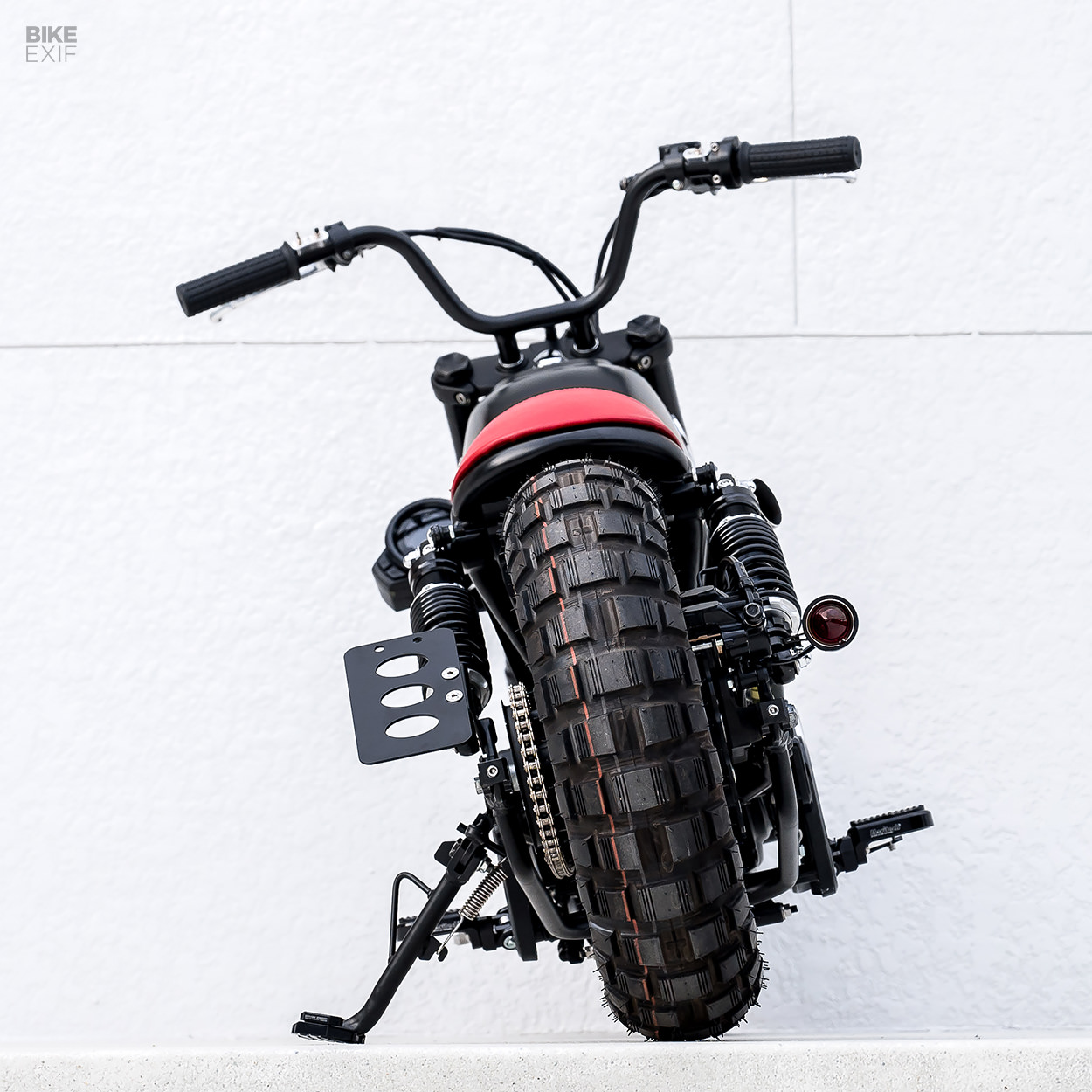