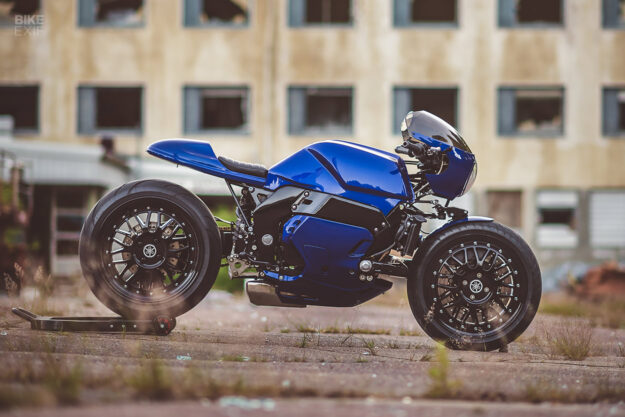 Telescopic forks have become the de facto solution for motorcycle front suspension, but most major manufacturers have dabbled in alternative designs at some point. Yamaha had the GTS1000 in the 90s—a sports tourer with a front swingarm setup that was vaguely similar to hub centered steering.

The GTS1000 wasn’t a big seller when it launched, but these days it scores mega points for being rare and unusual. It’s also an unlikely donor for a café racer project. Luckily that didn’t stop Aki Suokas from tearing into his own GTS, to create this sharp blue machine. 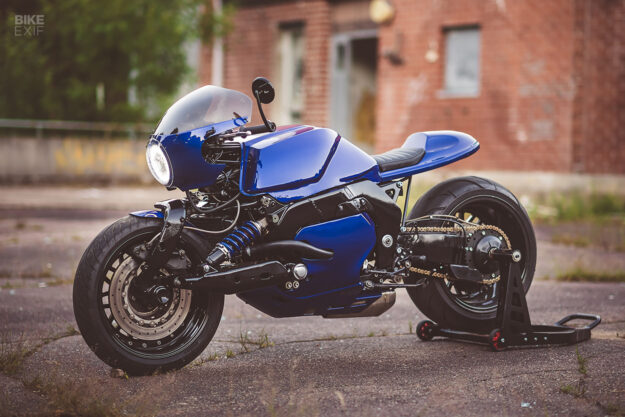 Aki lives in Finland, and has been riding since the age of 10. He credits his father with not only teaching him how to ride, but igniting his interest in the technical side of motorcycles. So he’s been modifying his own bikes since he took up stunt riding at 16.

Aki has a day job, but he dedicates his down time to motorcycling, and even races in the Finnish ice racing series during winter. Most of his builds are street fighters or race bikes—but he’s recently developed an interest in café racers. So when he found a 1997 Yamaha GTS1000 in full touring trim, panniers included, his brain went wild. 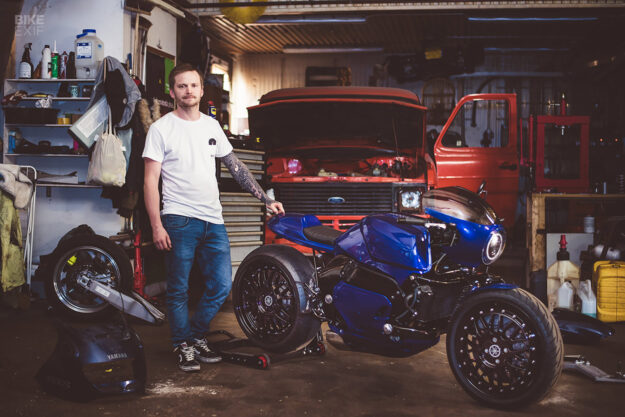 “I like to build bikes that are not only for show,” he says. “I always want to build a bike that you can ride.”

“From the beginning it was clear I want to build a café racer-style bike from this. Anyway, I didn’t know what the bike would look like when it was ready. I had no clear vision in the beginning—or, more correctly, the only thing that was clear, was that I wanted to fit some kind of special wheels, and a single-sided swingarm.” 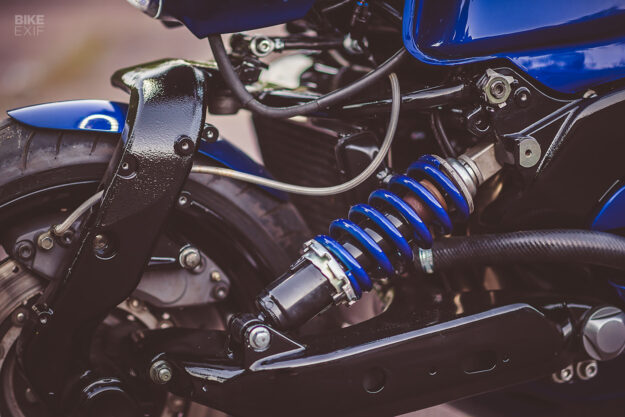 Top of Aki’s list was a reworking of the GTS1000’s already unique suspension. He wanted the front end to sit lower—but modifying the swingarm-centric system called for some clever engineering workarounds. In the end, he had to ditch the OEM steering link, and replace it with a series of chromoly linkages and ball joints.

A modified Suzuki shock does duty up front, with the single-sided swingarm (and shock) from a Honda VFR800 installed at the back. 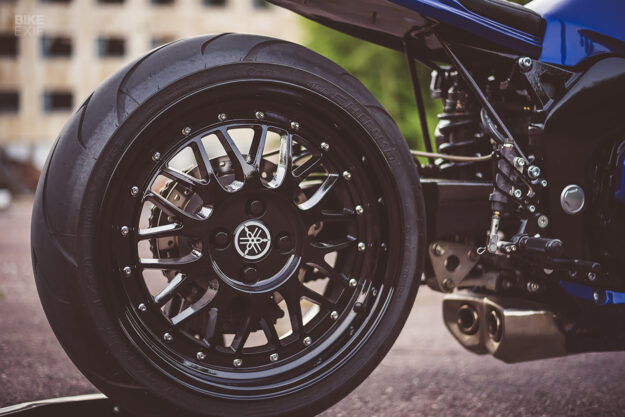 The wheels are particularly interesting: they’re matching 17” aftermarket car parts, modified to fit the Yamaha. Aki wrapped the rear in a chunky 200/50-17” Mitas tire, which would have been far too wide for the front end.

His solution involved cutting the center out of the front wheel, and mating it to the outer rim from a Yamaha FZR1000. The two parts are bolted together via a special mounting ring, welded to the FZR side. The arrangement also retains the GTS1000’s six-piston front brake caliper. 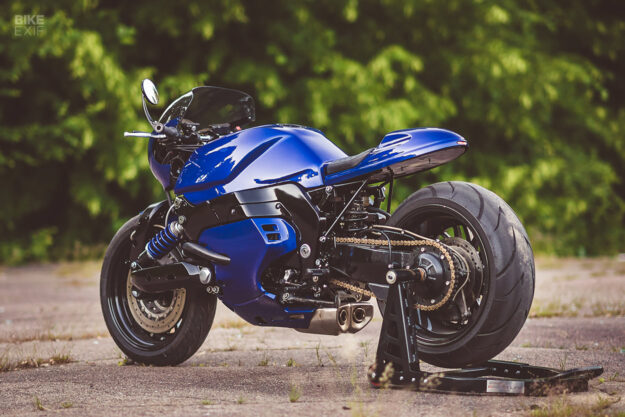 Aki tore into the bike’s frame too, liberating it of any superfluous attachment points and removing the rear section. Next, he fabricated a new subframe, rear shock mounts, fairing mounts for the front, and a new front fender and brackets.

As if that wasn’t enough work already, this GTS is kitted with a plethora of tailor-made body parts. Some of the bits are generic aftermarket items—but nothing’s made its way onto the Yamaha without extensive mods. 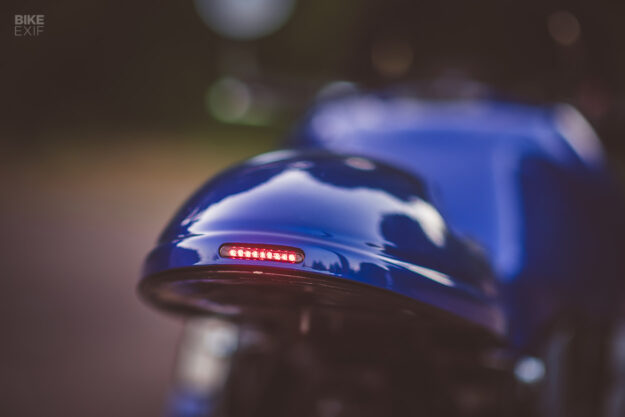 Up front is a modified aftermarket café racer fairing, equipped with a 5 3/4” LED headlight. Out back, Aki tweaked an off-the-shelf tail section to fit the bike, adding a slim seat pad and a Frenched-in Highsider LED taillight.

Sitting between the two is a custom fuel tank arrangement that’s so well executed, it looks like it came from the factory. Aki started by cutting and shutting the stock fuel reservoir to shrink it; it holds half the fuel it did before, but he’s not planning to tour with the GTS. Then he cut open a 1984 Suzuki GSX1100 tank, which he stretched, widened and trimmed to match the frame, before fitting it as a tank cover. 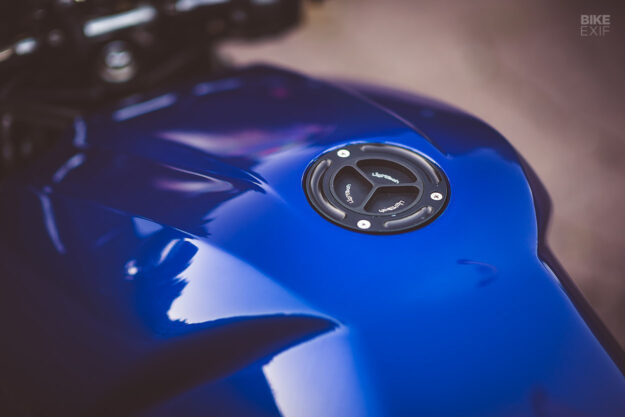 The twin-outlet exhaust muffler comes from another bike too, but it looks like it belongs here. It’s off a Kawasaki Z1000, and is mounted to a set of custom headers to tuck it in under the bike. 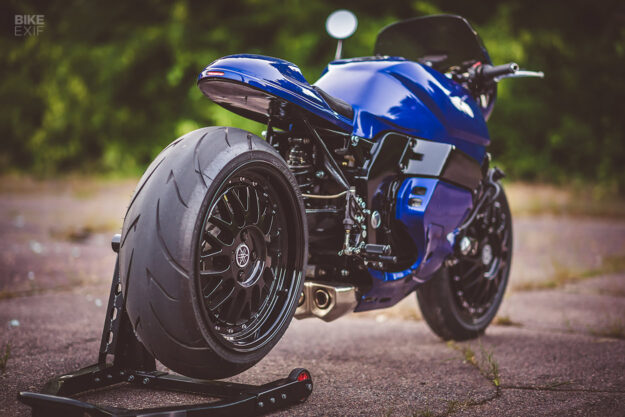 All told, it’s an impressive rework of an unlikely motorcycle. Remarkably, Aki did most of the work himself, outsourcing some of the specialized welding and machining jobs to friends. He had help with the paint too—Kuusaan Automaalaamo Oy shot the blue bits, While Tmi Heikki Jarvenpaa did all the black coatings.

“In the end,” says Aki, “this bike was built with just pure intuition, while working and living a so-called ‘normal’ life.” 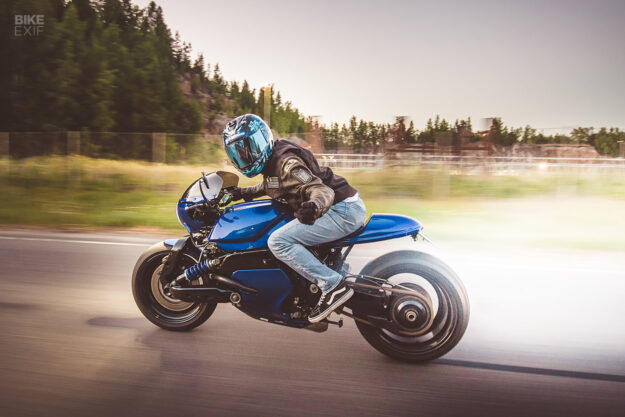 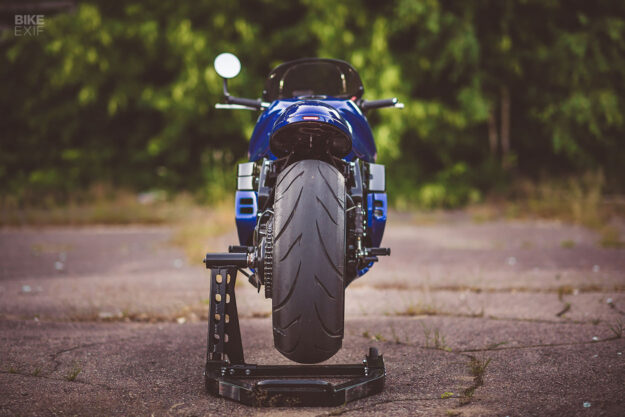