Off the grid: A pair of Super Cub scramblers from Korea 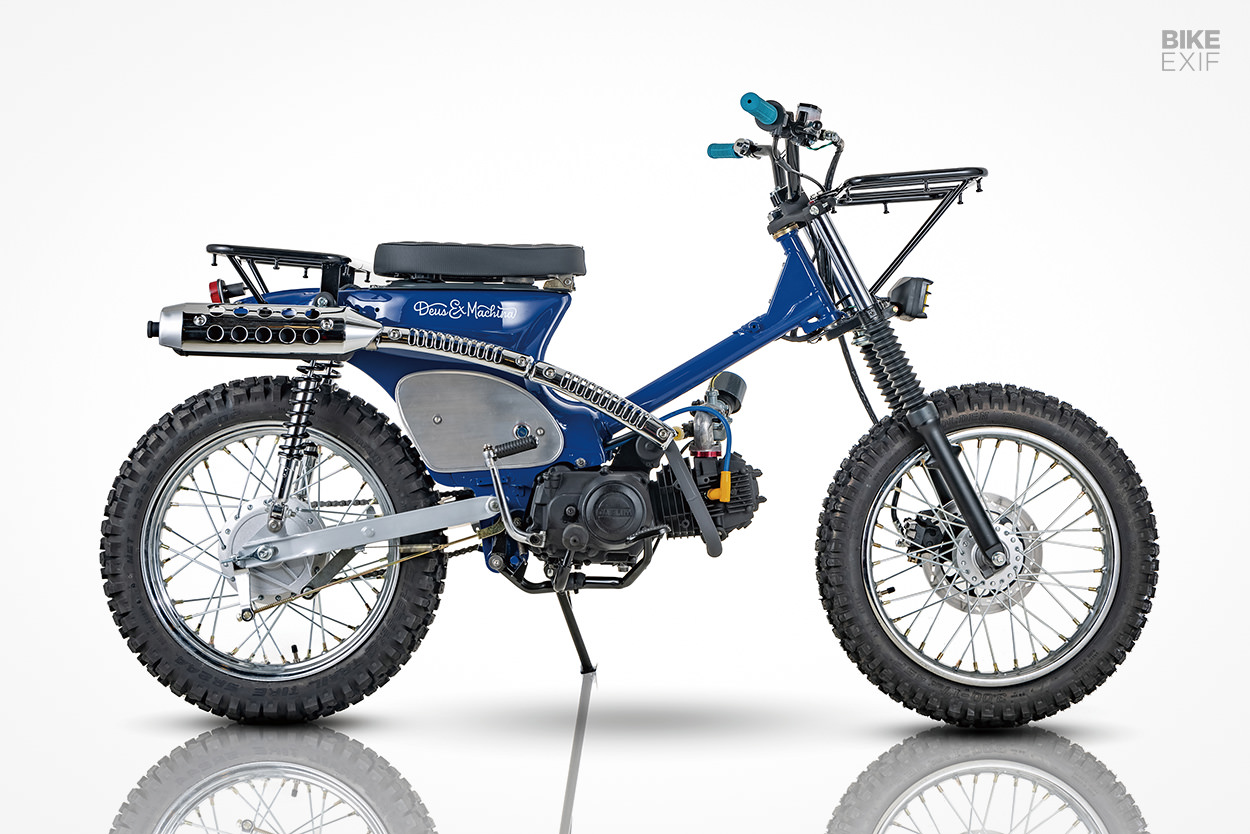 As Robert Burns once quipped, the best-laid plans of mice and men often go awry, and this statement has become exponentially more true of late. The COVID-19 pandemic has not only impacted businesses, but also thrown a wrench in the social lives of most people. Deus ex Machina’s Seoul outpost has found the cure for boredom though, in the form of a pair of tailor made Honda Super Cub scramblers.

“Under the pandemic circumstances, we’re all locked down and not able to hang out with buddies in the city,” explains shop boss, Nick Lee. “Since this is no longer an option for us, we’ve been going on minimalistic camping trips to the mountains and ocean, so we decided to build a pair of bikes for this exact purpose.” 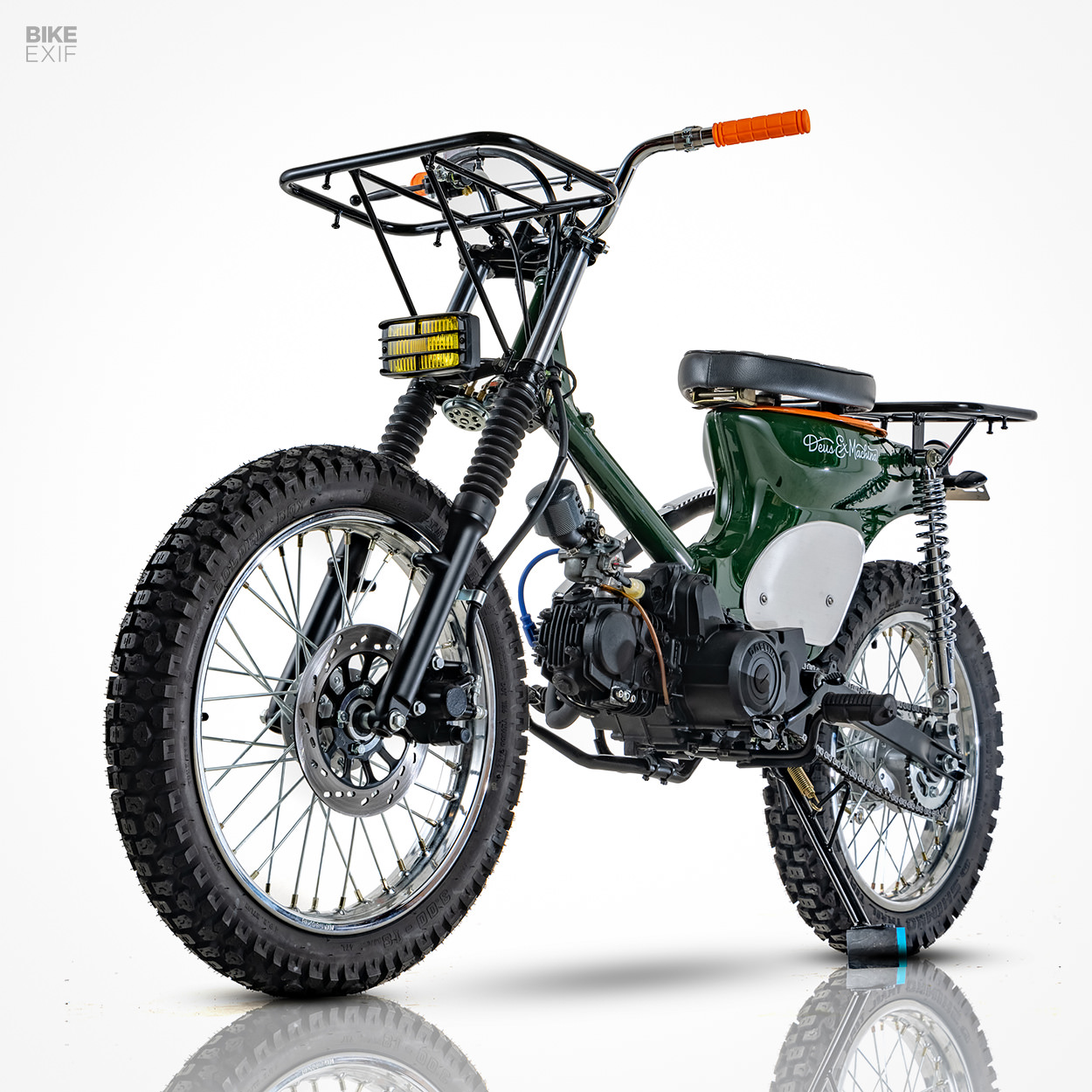 Deus tapped South Korean custom shop and regular collaborator, Crazy Garage, to customize the two scramblers. Dubbed ‘San’ [green] and ‘Bada’ [blue], the names of the bikes, which started out as 2004 and 2007 Super Cubs respectively, literally translate to ‘mountain’ and ‘ocean.’

Representing the fourth and fifth customs from Deus Korea, they needed to be capable of taking on some light off-roading duties. So both donors were in dire need of upgrades in the powertrain and suspension departments. Both Cubs had their 50 cc motors pulled, and replaced with 108.9 cc singles found in Daelim’s Citi Ace 110 scooters. 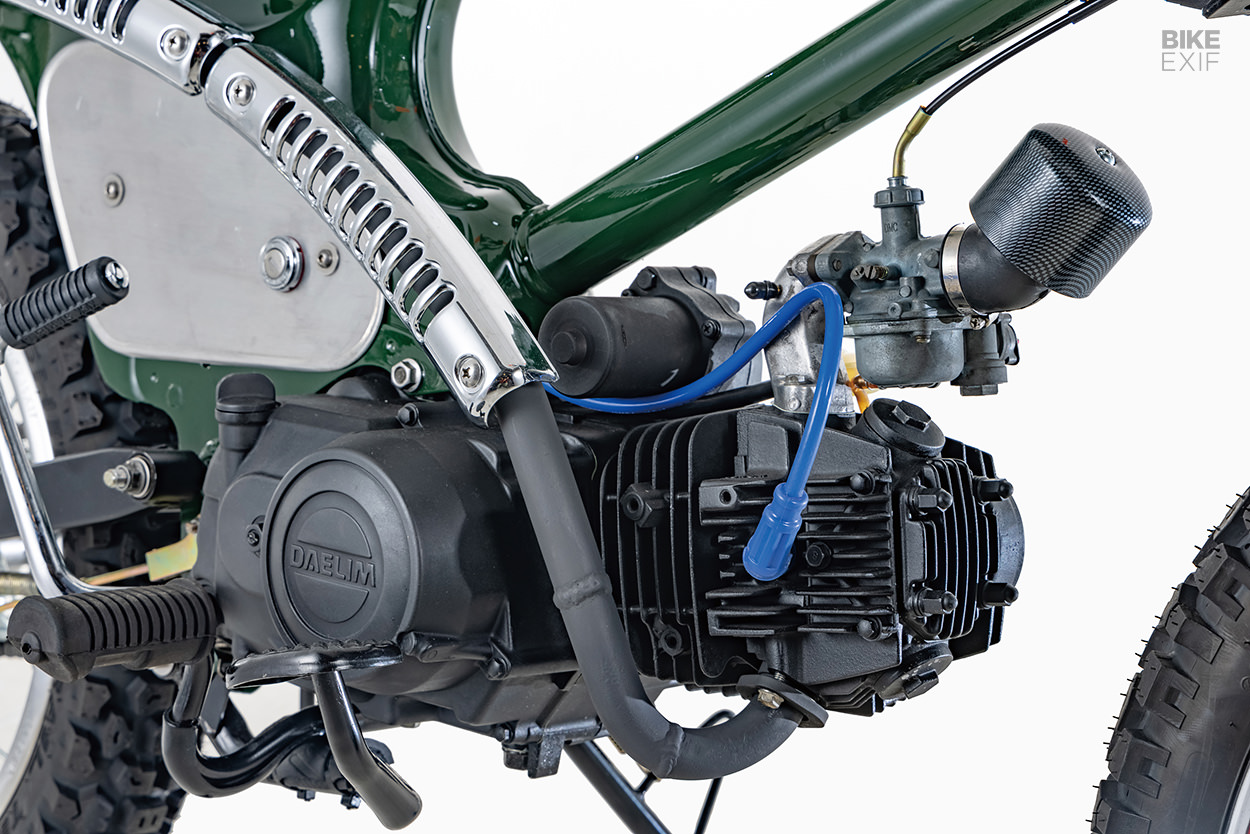 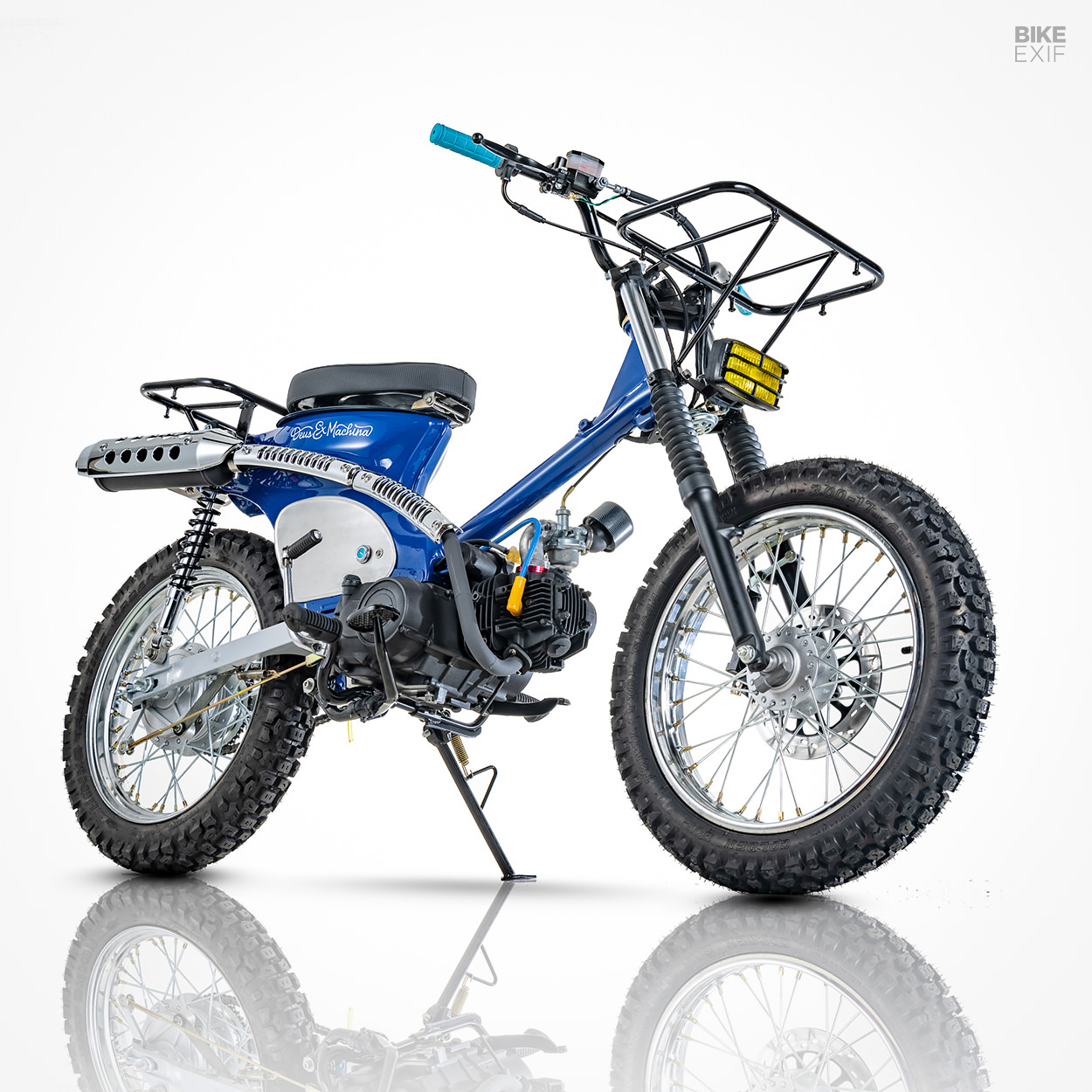 Next, Crazy Garage turned their attention to the budget items that comprised the Cubs’ suspension setups. “The concept was to produce a pair of bike-packing trip machines, which meant it was necessary to secure some additional ground clearance and travel for forest, road, and fire trail riding,” Nick tells us.

The forks of both donors were jettisoned in favor of front-ends plucked from Honda CG125s. They allowed for a relatively painless swap, with the upper portion of the steering stem being a near-perfect fit. Out back, the rear suspension pieces were upgraded to longer Takegawa shocks, with custom extension adapters to get the required ride height. 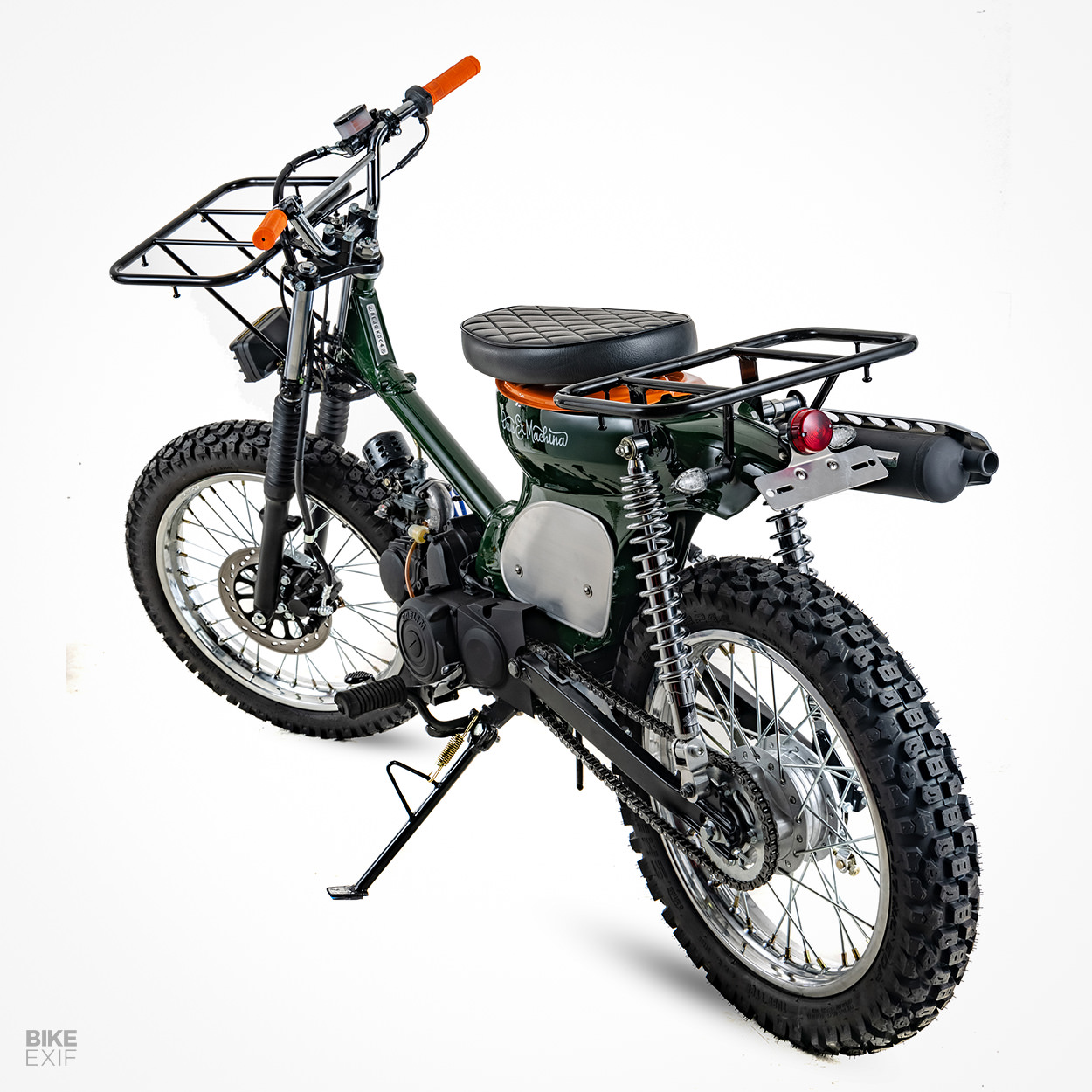 “The front wheel sizes on San and Bada are different, so the length of the extension adapters are different as well,” Nick explains. “Both are Honda CG Series items wrapped in knobby tires, though San uses an 18″ front wheel and a 17″ in the rear, while Bada uses 17″ spoked hoops fore and aft.”

Further readying the Cubs for off-grid use are a matching set of scrambler bars, fork boots, and revised taillight and indicator arrangements. The grilled, rectangular, yellow-lensed headlights are actually fog lamps borrowed from “heavy equipment vehicles.” 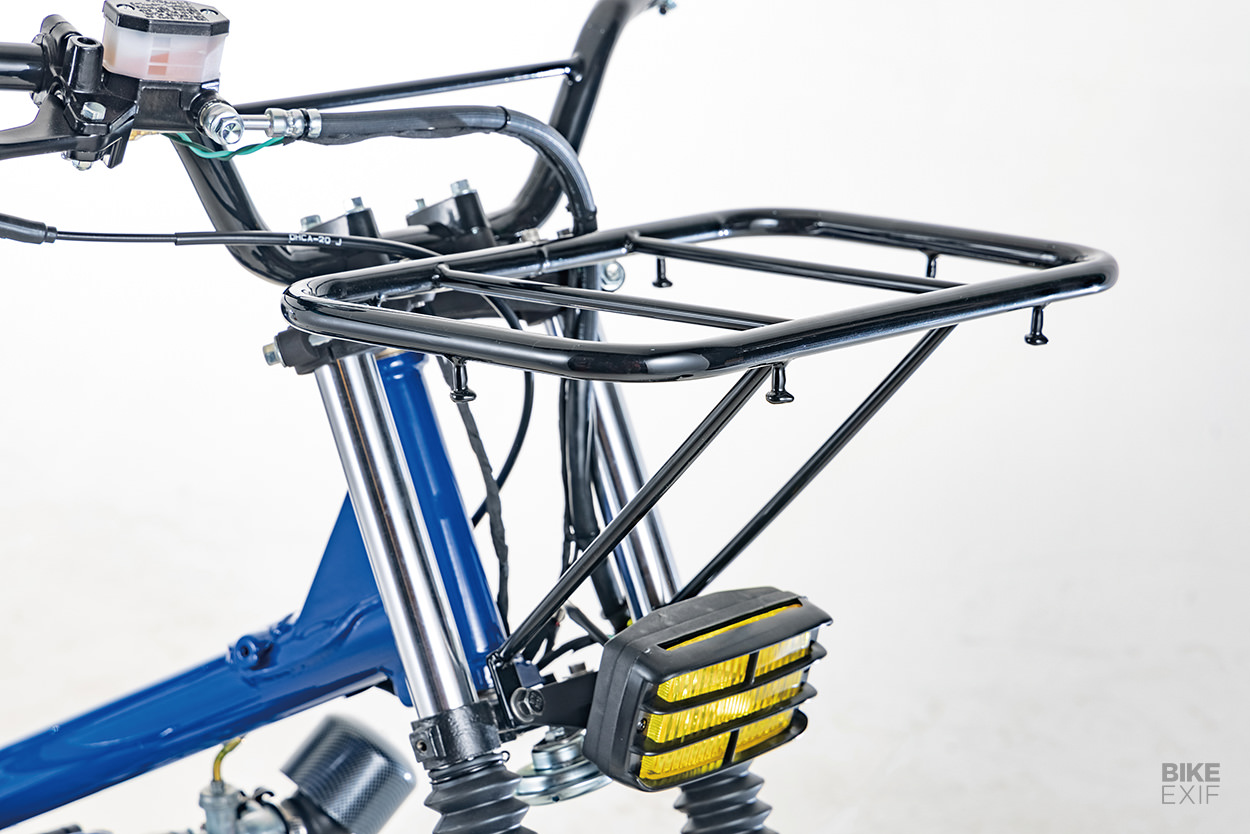 Needing to accommodate gear for weekend camping trips, the bikes have also been outfitted with front and rear luggage racks that were custom-crafted from steel tubing.

With the new battery-less kits, the bulbous side covers that once housed the batteries were smoothed over, using custom aluminum panels that now hide the builds’ ignitions. Directly above, both of the Super Cubs were treated to custom seats that boast the same size and shape, but different upholstery styles. Both seats are also mounted on hinges that allow them to flip up, in order to access the bike’s tank’s fuel cap. 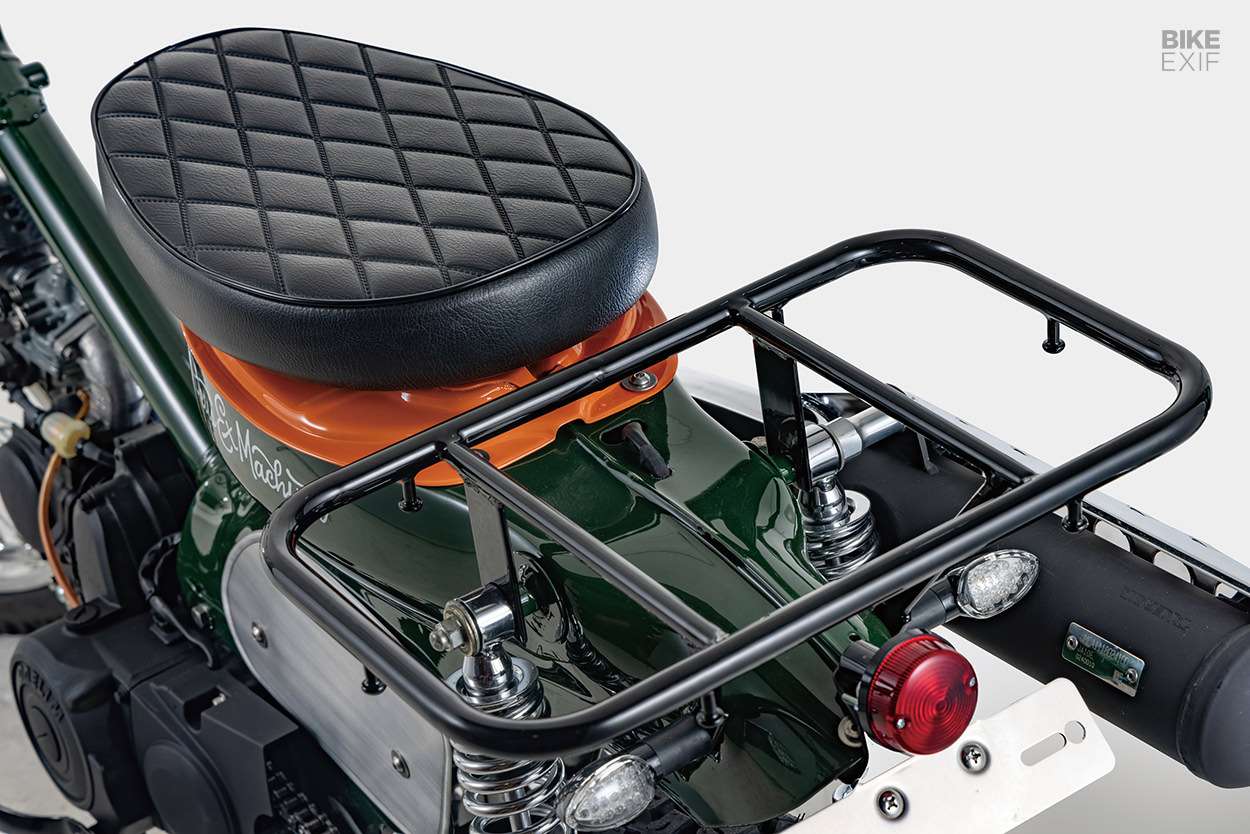 In addition to their wheel sets, the other main difference between San and Bada is their paint. Bada has been cloaked in a deep and glossy royal blue that’s complemented by light blue handgrips and spark plug coils. San, on the other hand, has appropriately been adorned in a forest green livery, that’s contrasted with orange grips and an orange seat pan.

The engines have also been painted black, as have the fork lowers, kickstands, headlight shells, and luggage racks. 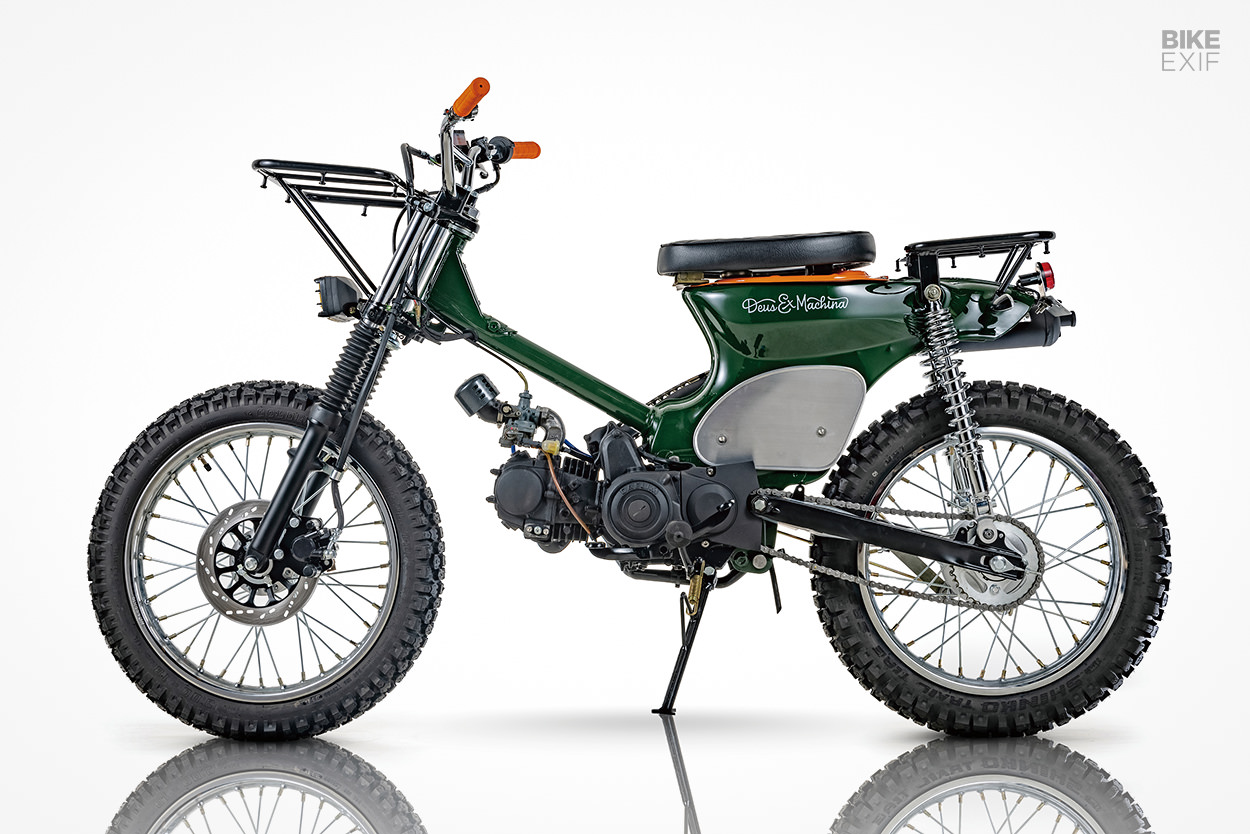 Interestingly, San and Bada’s stories have just begun, as the crew plans to continue upgrading and optimizing the Super Cubs for off-road and camping duties. “Both machines will be used for future adventures, and after some testing, we’ll be customizing the bikes to be easier to ride, and more suitable for Korea’s untamed terrain,” says Nick.

In a world where function so often takes a back seat to form, it’s genuinely refreshing to see such a utilitarian set of machines built for such a specific purpose… especially when they look this good. 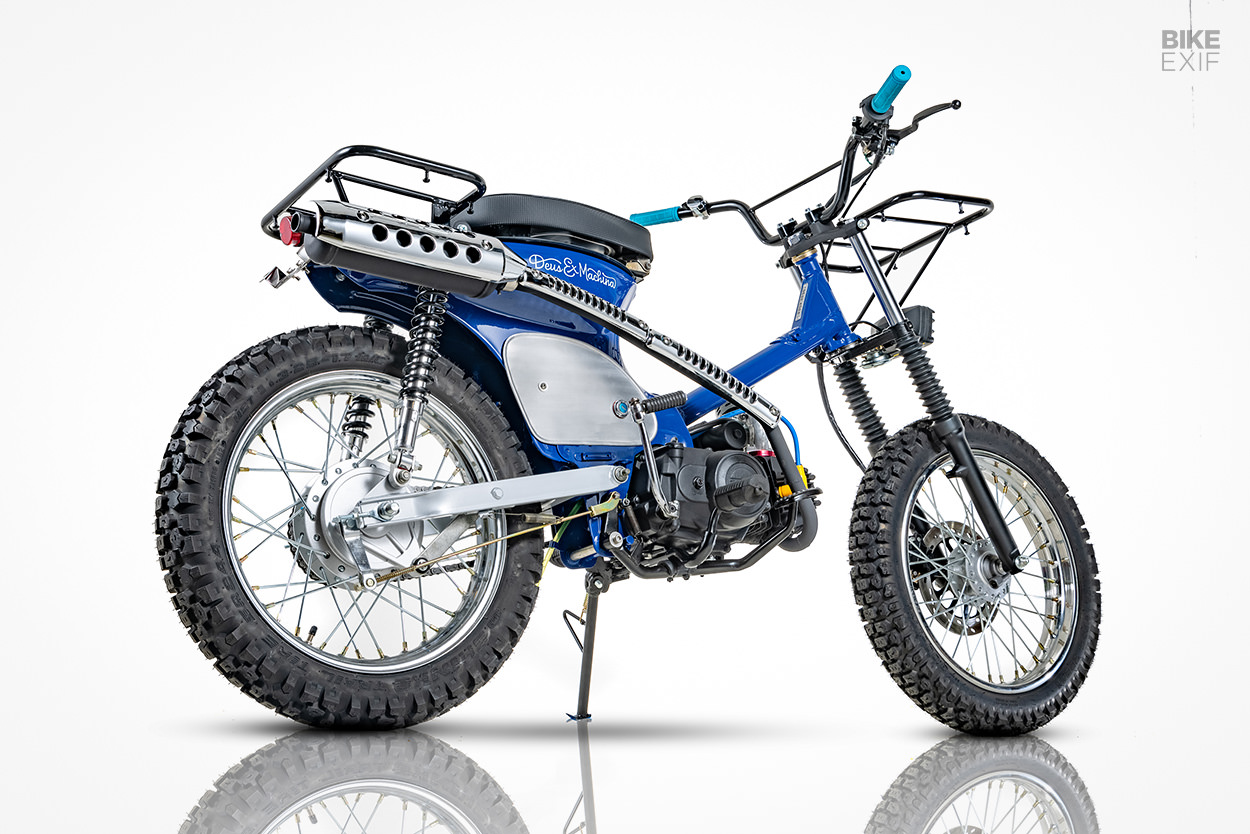