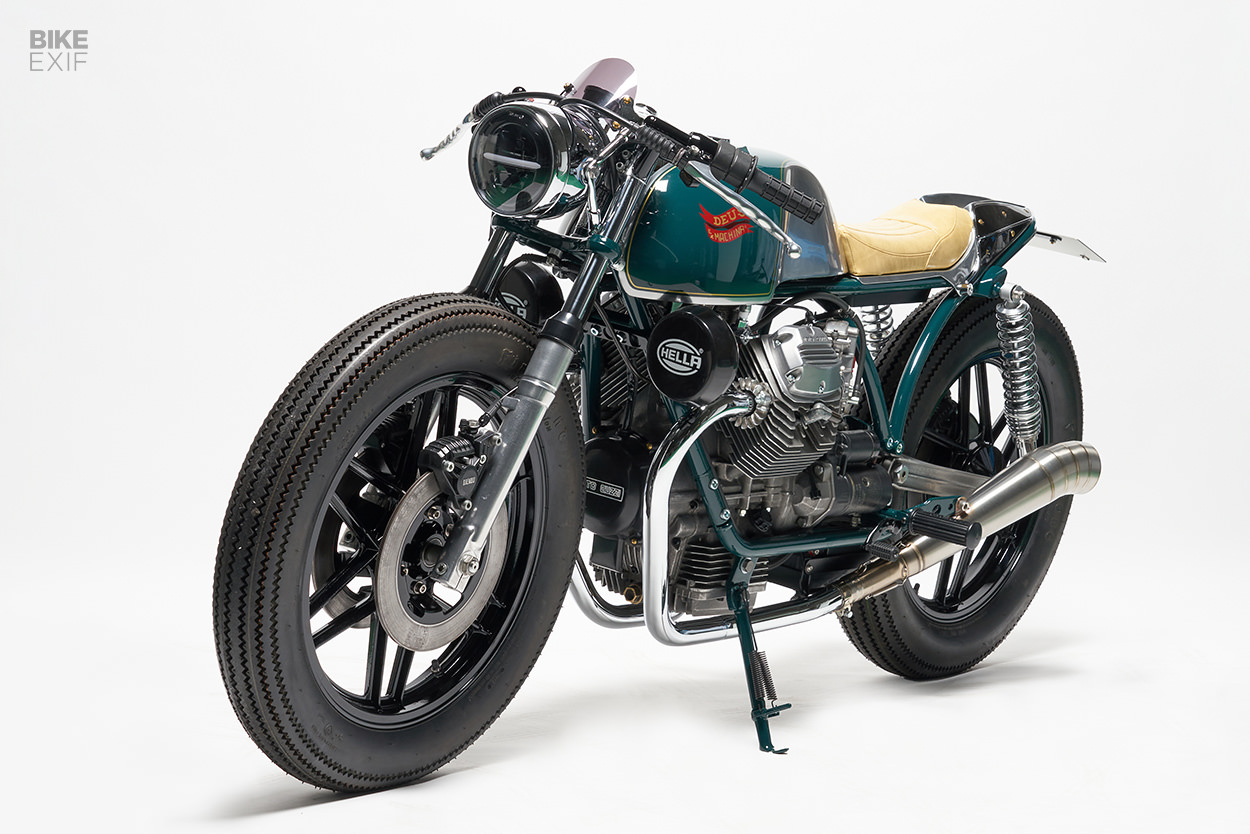 When a major OEM releases an anniversary edition motorcycle, it’s typically an existing model with a new livery and a numbered plaque. But when a custom bike builder does it, it’s a whole other ballgame.

This 1980 Moto Guzzi V50 cafe racer was built as a tribute to the storied marque’s 100th anniversary, and it’s positively dripping with style. It comes from Tomoyuki Soeda, head wrench at Deus ex Machina Japan in the historic Asakusa district of Tokyo. It was also built without a client or a brief; Deus Japan simply wanted to celebrate Guzzi’s centenary. 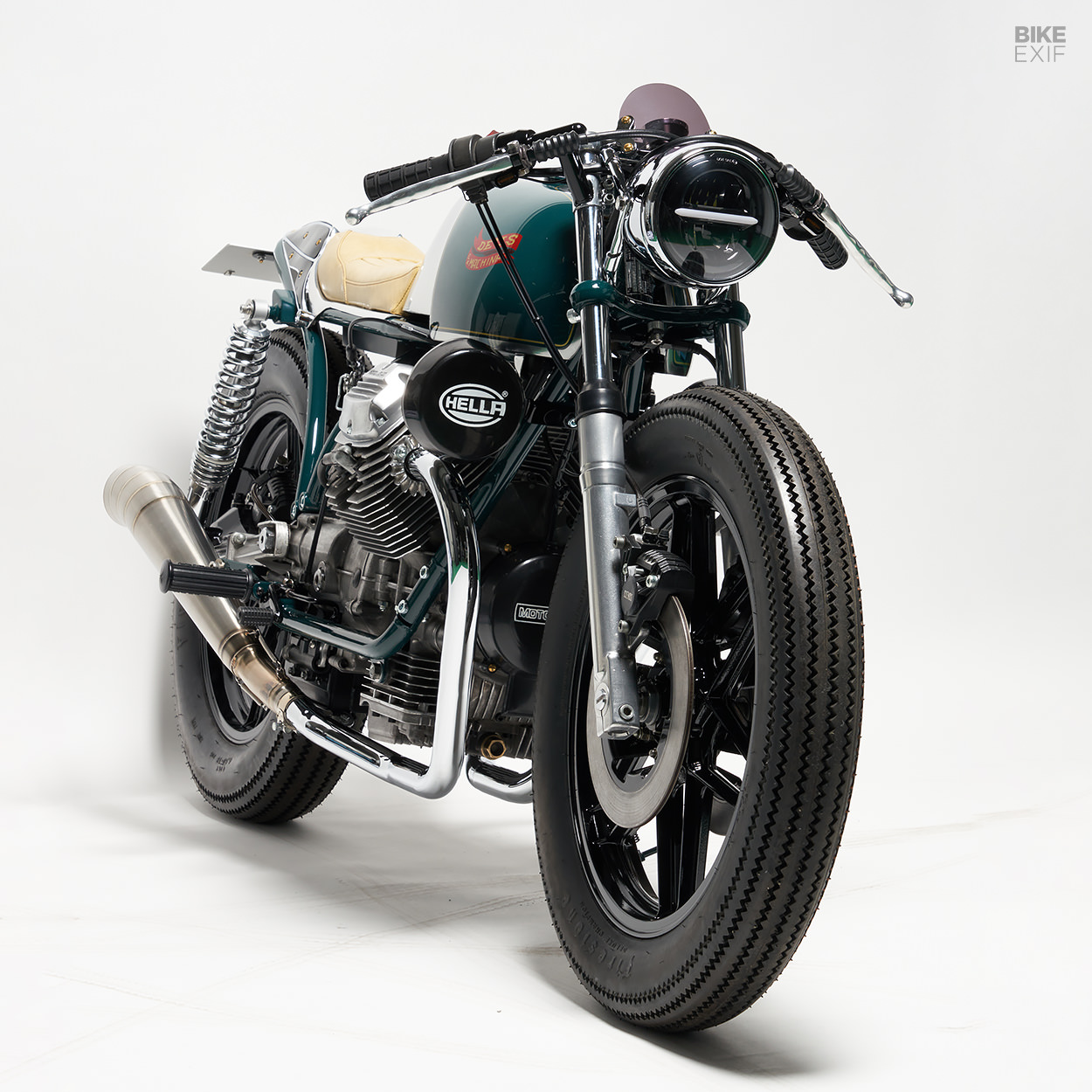 Soeda-san also specifically wanted to work with a small block V50, “for the experience and inspiration,” but he had to find a suitable donor first. “These bikes are very rare in Japan,” he tells us. “We were very lucky to find it.”

Not only did Deus Japan manage to get their hands on a V50, but it was in a good condition too—so there was no need to rebuild the engine. 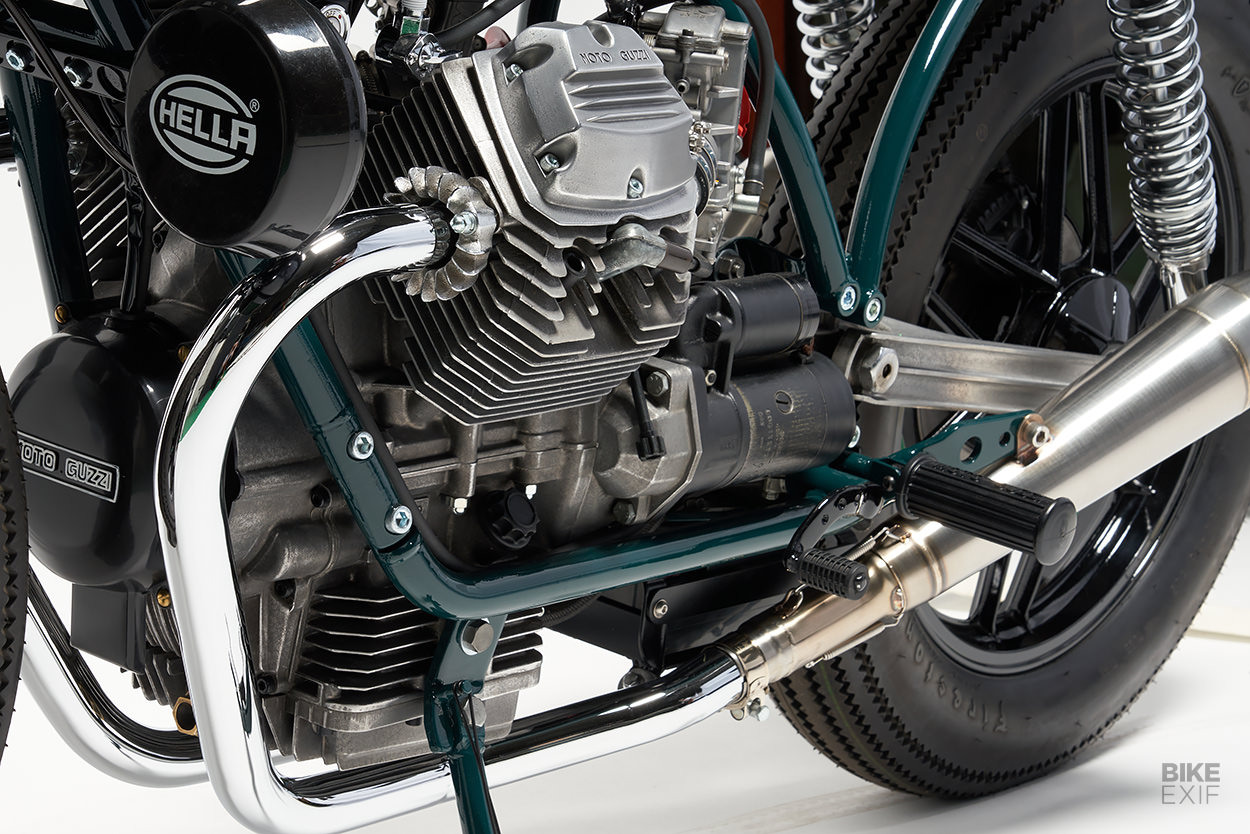 The Guzzi still has its original 18” wheels and Brembo brakes too, but now rolls on classic Firestone Champion Deluxe tires. Tomoyuki tweaked the stance by lowering the original front forks by 40 mm, and by adding aftermarket rear shocks that are 40 mm longer than stock. 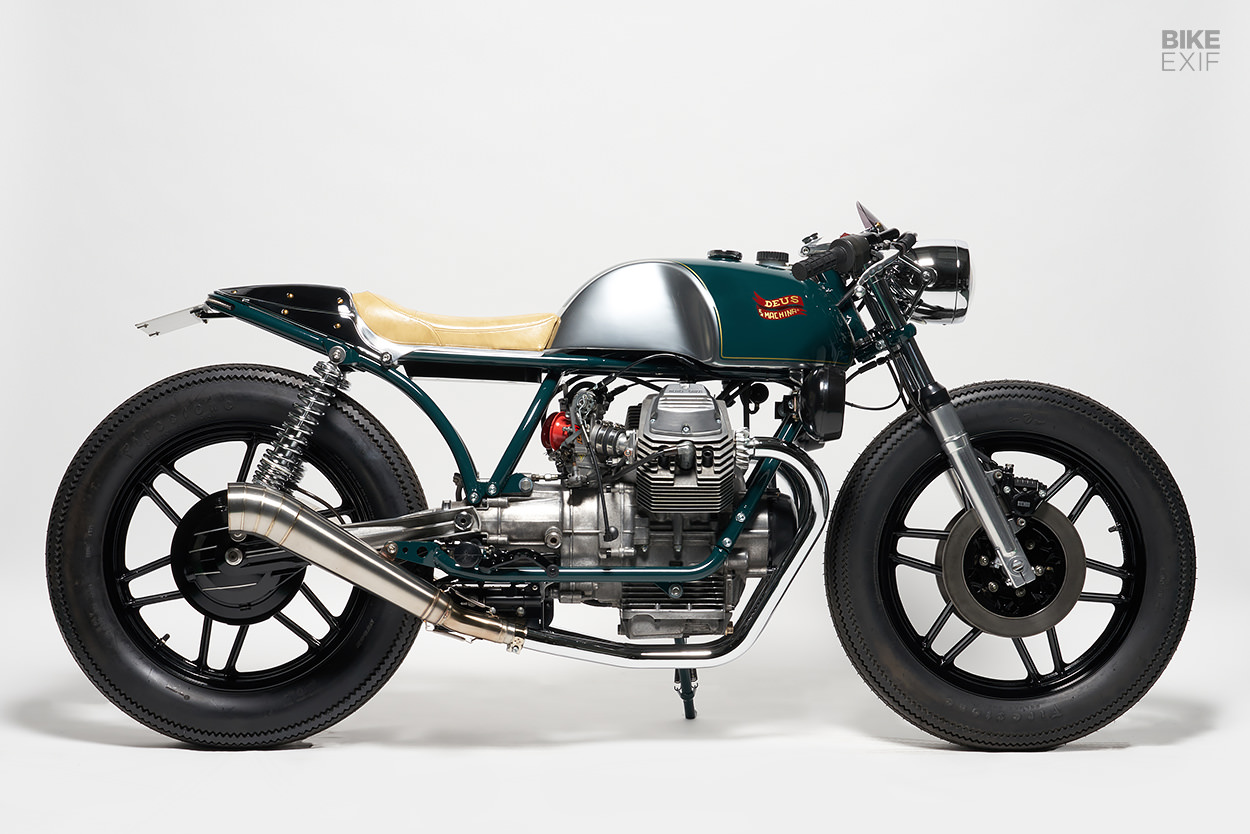 The biggest changes are up top, with the Moto Guzzi’s sleek new cafe racer-style bodywork. In an inspired move, Tomoyuki borrowed the fuel tank from a Yamaha SRV 250—a small modern classic that Yamaha manufactured in the 90s. Then he tweaked the daylights out of it, to make it fit the V50’s frame and his vision for the build.

Out back is a hand-made aluminum tail cowl. It’s a neat design, featuring a deep groove up top, and tabs on the sides that wrap around the junctions on the hand-made tubular steel subframe. 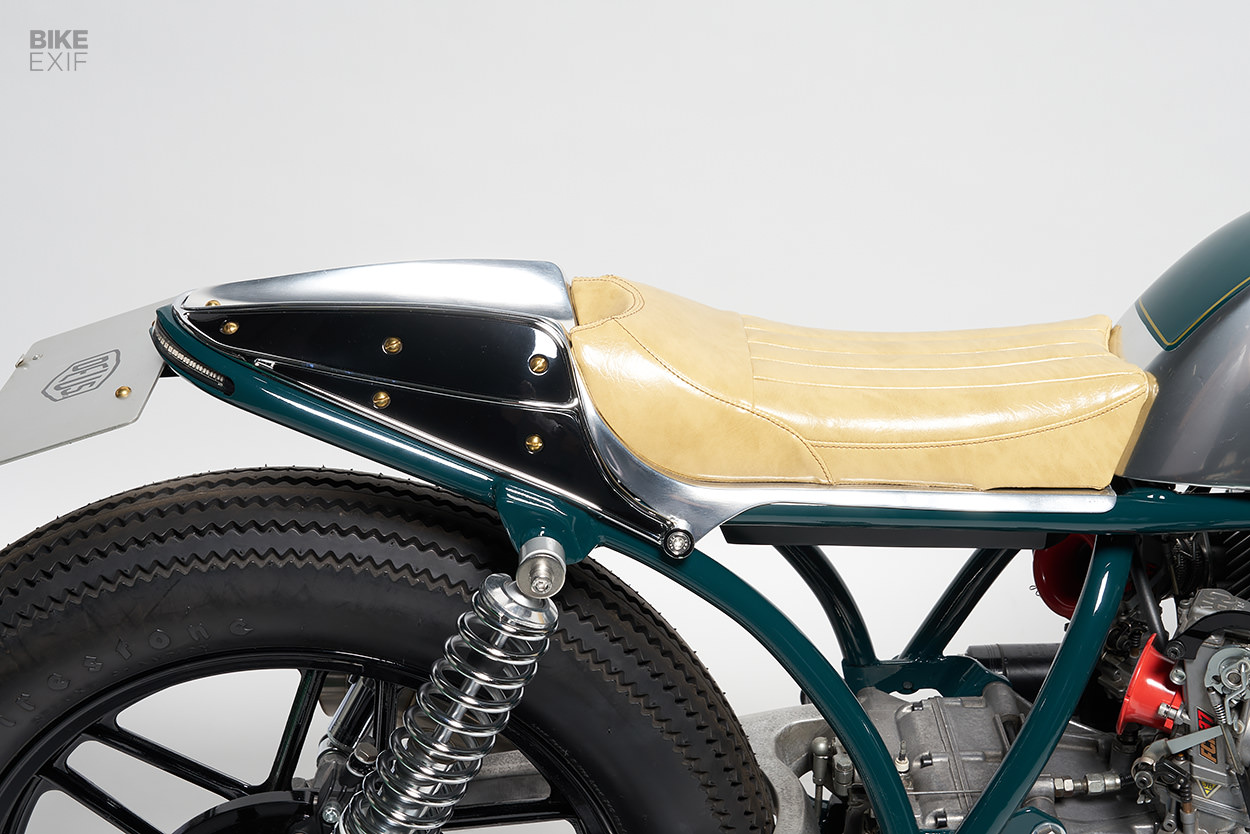 It’s topped off with a brown leather seat that subtly matches the tank’s knee indents at the front, and the grooved cowl at the back. The whole design from tank to tail is intentionally narrow at the middle—emphasizing the bulk of the Guzzi’s protruding cylinder heads from the rider’s perspective.

Recessed into the rear hoop is an LED strip that functions as a taillight and turn signals, and there’s a discreet electrics tray tucked underneath. 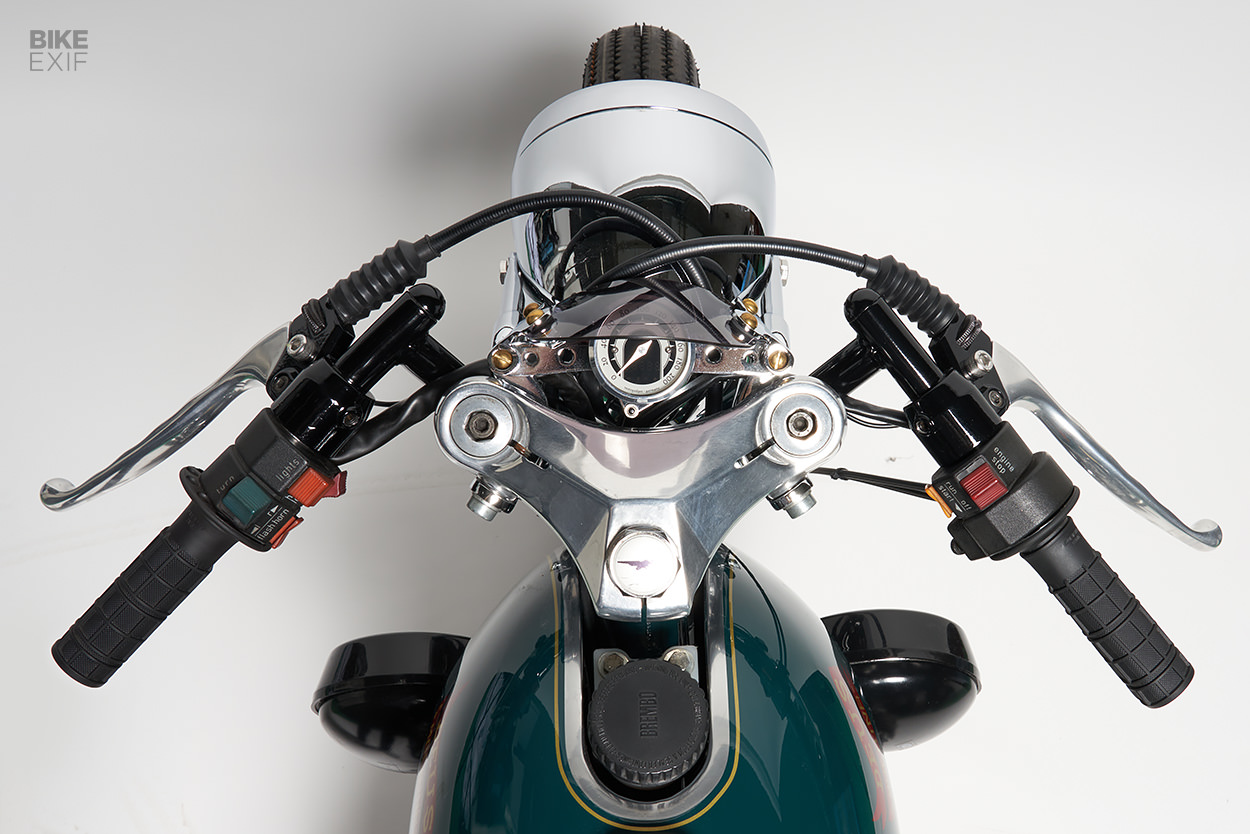 The V50’s revised cockpit is a clever mix of old and new. Tomoyuki installed Tomaselli clip-ons, but kept the original 1980s switchgear. The speedo is a digital and analog combo unit from Motogadget, and is tucked away neatly behind a small smoked windshield.

The screen, its mounting brackets and the mounts for the LED headlight were all made from scratch. Tomoyuki also relocated the original brake fluid reservoir to just in front of the fuel tank, and added a pair of classic Hella fog lights lower down. 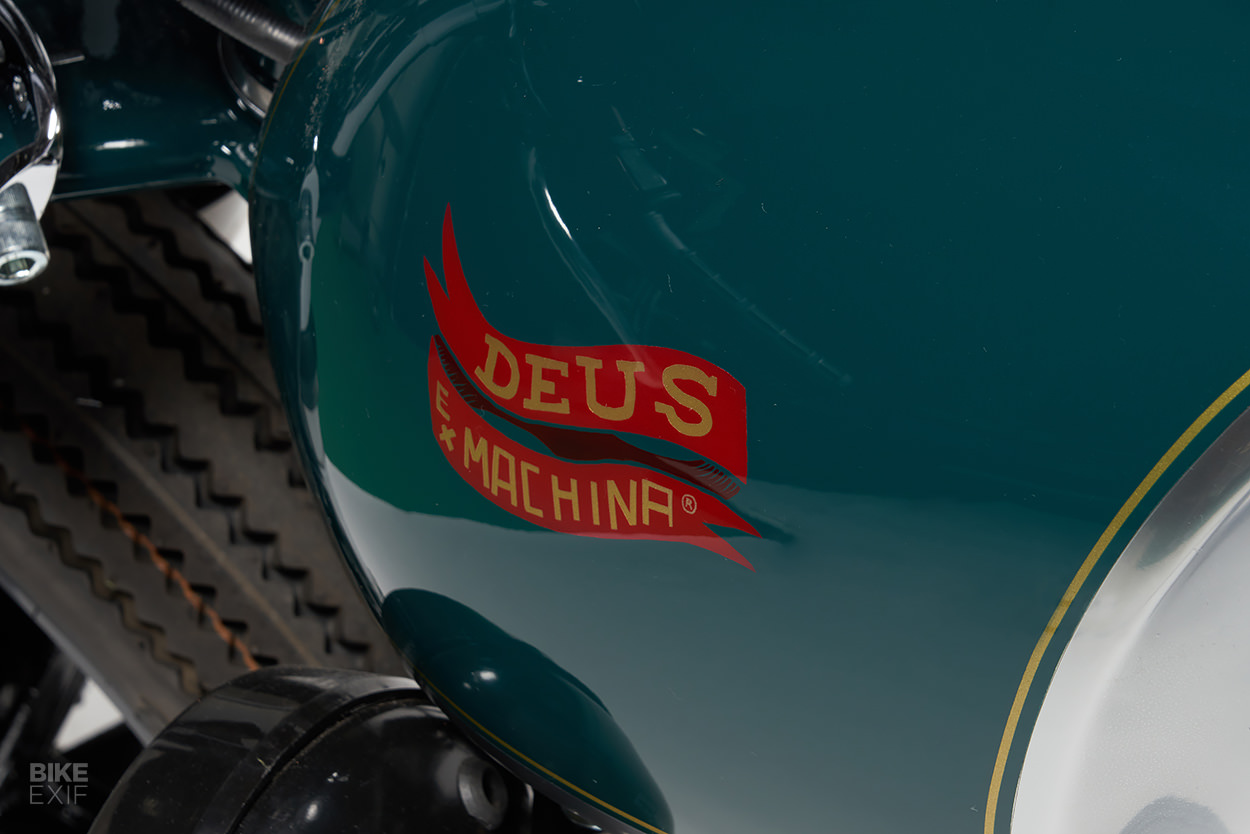 Deus wrapped the V50’s frame and parts of its bodywork in a luscious teal hue, leaving enough polished alloy bits to show off Tomoyuki’s handiwork. It’s slightly reminiscent of Moto Guzzi’s own green and silver anniversary scheme, only much prettier. A subtle gold pinstripe and a sprinkling of brass hardware finish things off.

Dubbed ‘Beretta,’ this svelte cafe racer is stunning homage that would make any Guzzista swoon. Unsurprisingly, it’s already been sold. 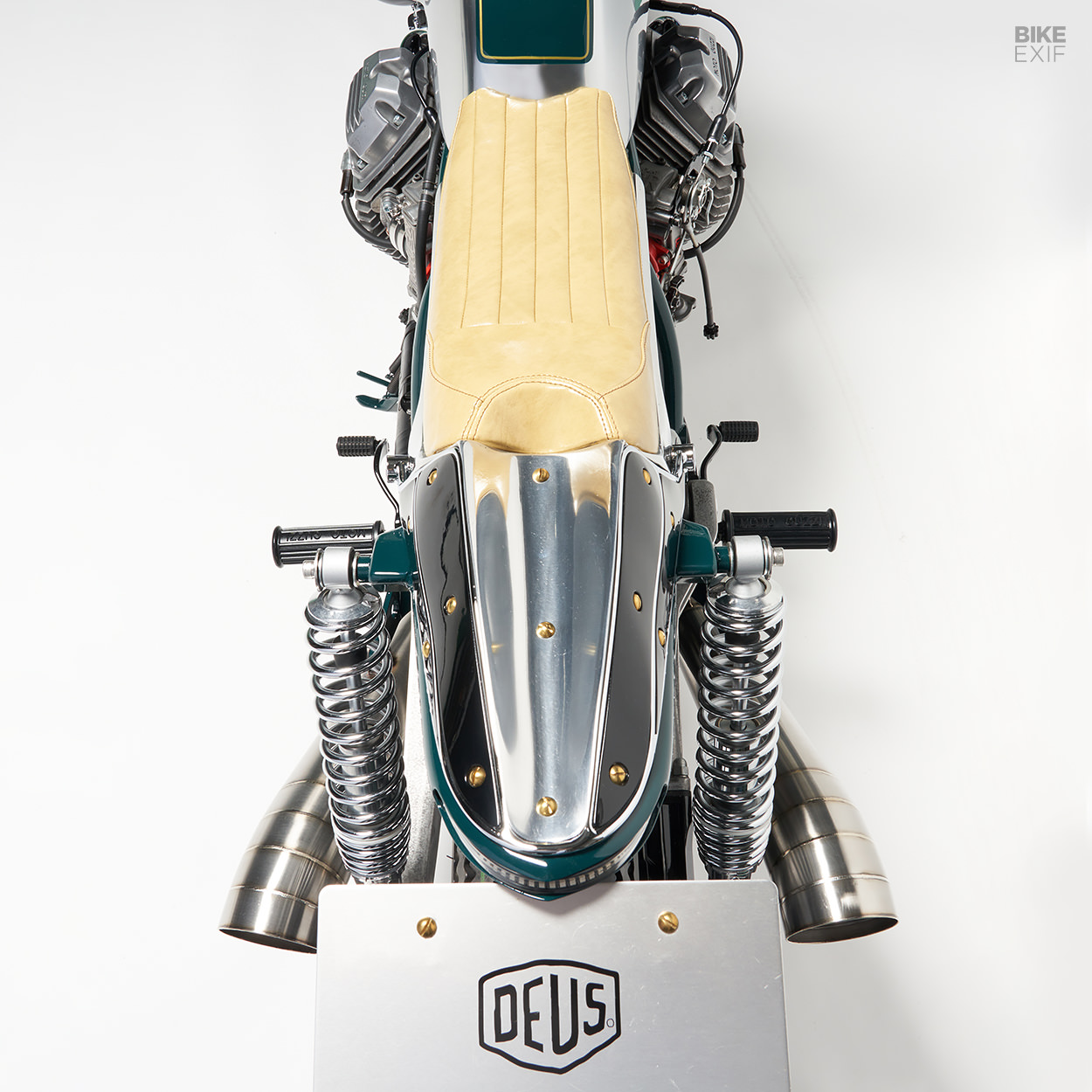