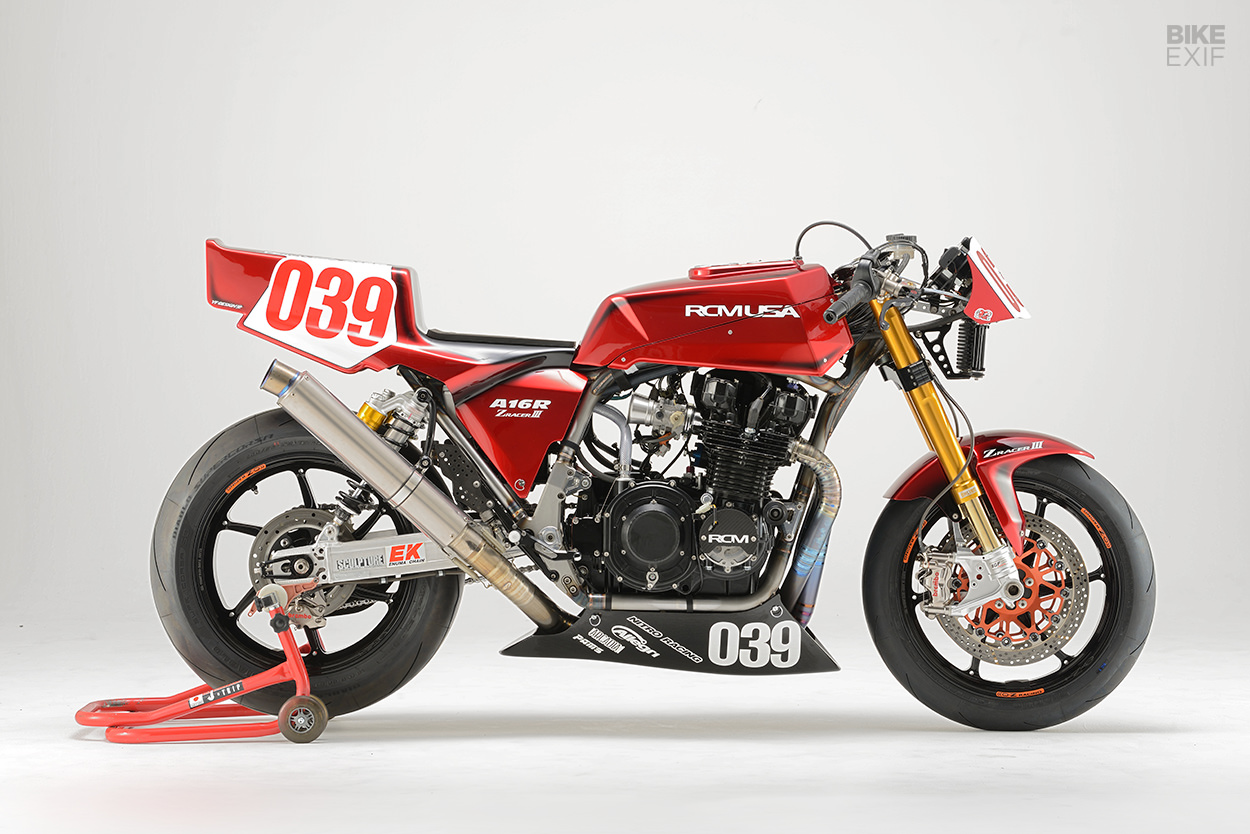 Anyone who has raced motorcycles or spun spanners in a pit lane will know that track bikes are a work in progress. They’re mobile test beds, because shaving seconds off lap times is the only way to stay ahead of the competition.

The mechanics at the Japanese workshop AC Sanctuary know this. For the past three years, they haven’t just been building muscle bikes for the road—they’ve also been tuning and modifying this incredible Kawasaki racer. 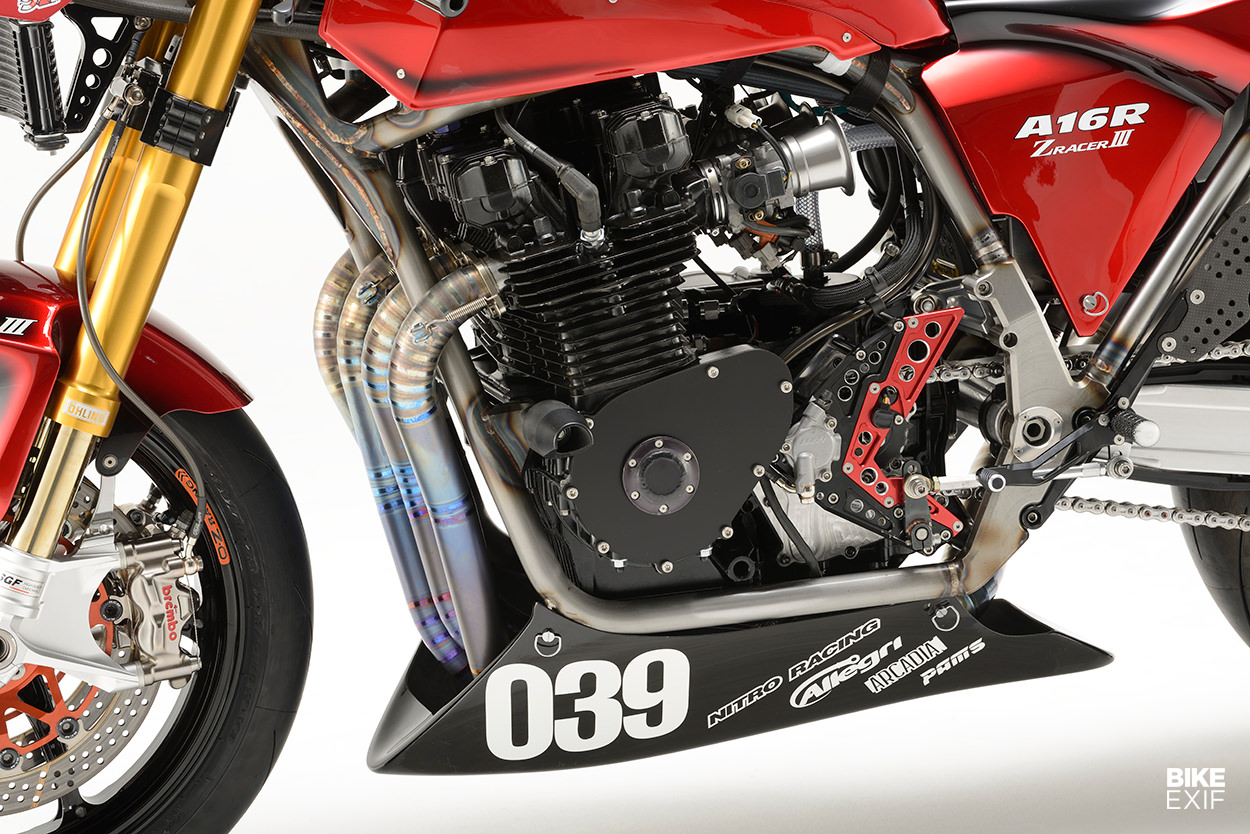 The core of the bike is a Z1000 engine, which delivered 85 horsepower at the crank when it left the factory in 1977. It now measures 152 hp at the rear wheel on the dyno. That makes this the fastest air-cooled bike on the Japanese classic racing scene, and it also holds the lap record for its class at the Tsukuba Circuit.

According to AC Sanctuary founder Hiroyuki Nakamura, the Z1000 will race for the last time in 2022. “We didn’t enter any races in 2021, due to the spread of the virus. But we are planning to race in November this year, in the T.O.T. [Taste of Tsukuba] event.” 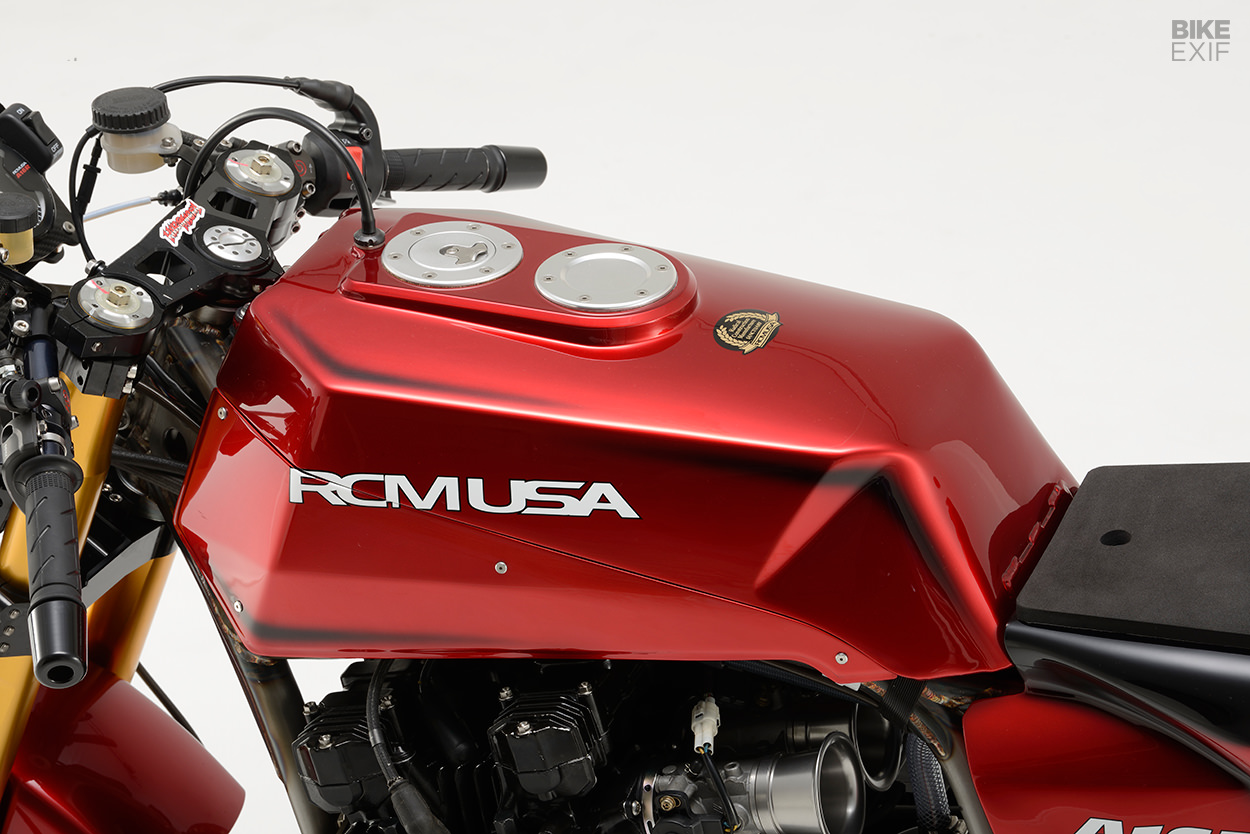 The Z1000 will line up in the Super Monster Evolution class, which is the fastest class for air-cooled engines. “The race is run with the Hercules class, the fastest water-cooled class—because we’re trying to beat those high-powered machines as well,” says Nakamura. “After that race, the challenge will come to an end.”

Most of the Z1000’s recent development has centered on the DOHC two-valve four-cylinder engine, which uses a carefully ported GPz1100 cylinder head modified to take ZX-10R injectors. 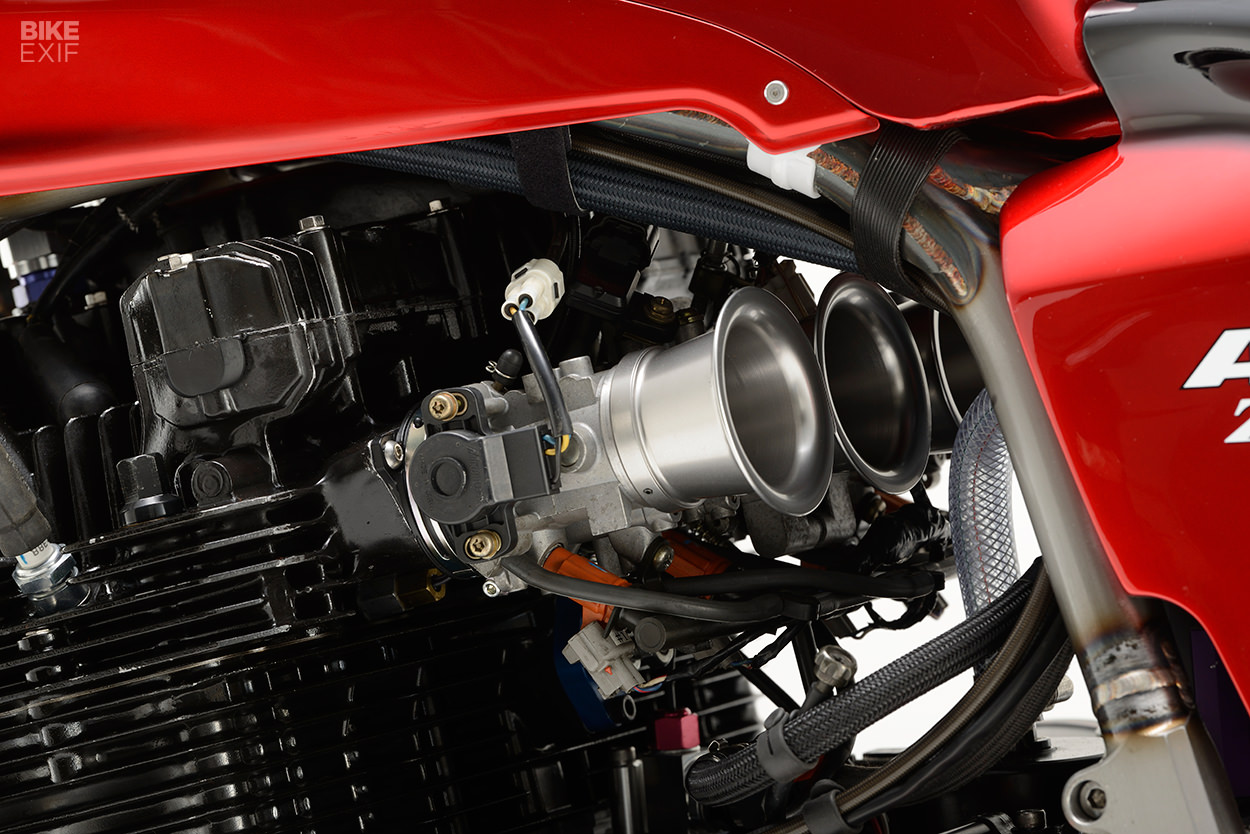 Nakamura-san has fitted .460 cams from Web Cam, acting on thin-stemmed valves matched to uprated APE springs. He’s also slightly increased the compression ratio, and designed an adapter in CAD/CAM to allow the ZX-10R throttle bodies to be used.

A virtually straight-through muffler is another new addition. Even smaller than the previous carbon fiber unit, it’s hooked up to the (thankfully unchanged) pie-cut headers. 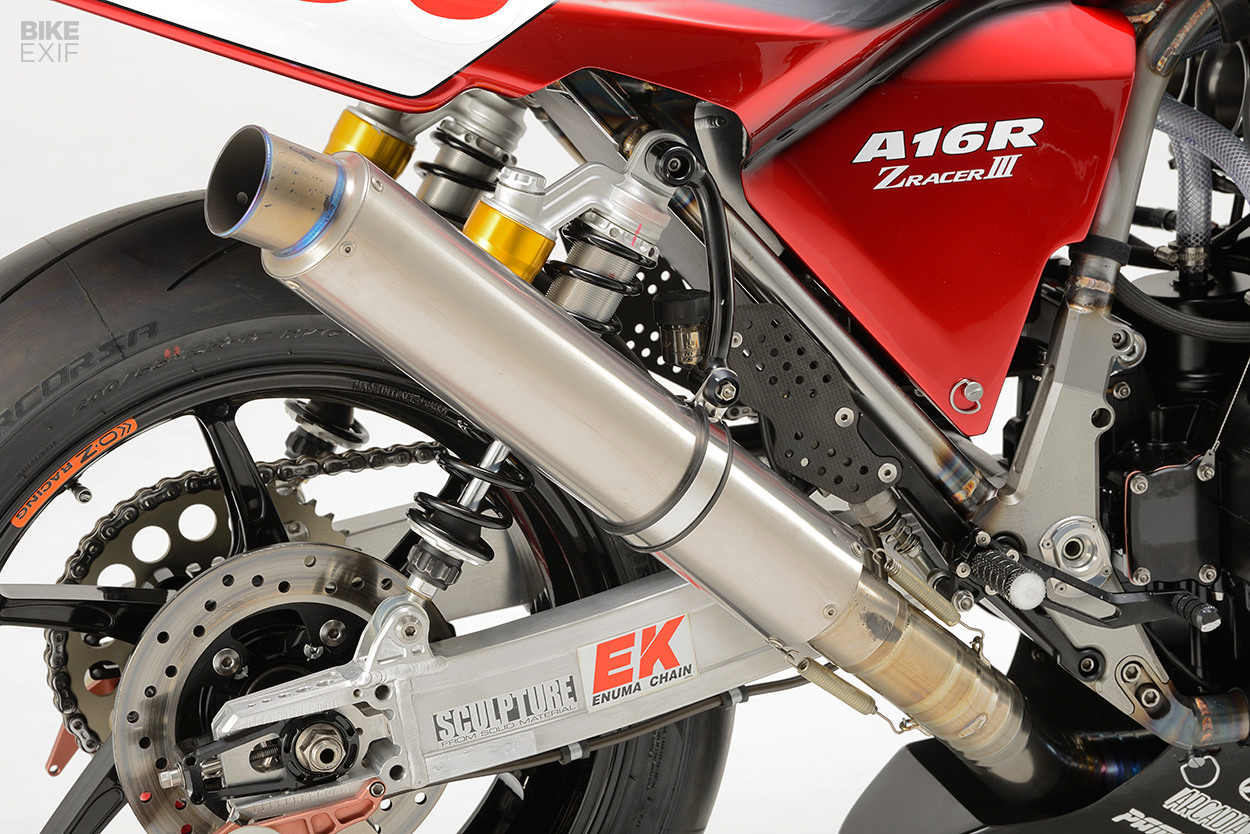 Extra power always comes at a cost though, and in this case passing the 150 hp mark caused lubrication problems: the higher internal pressure in the engine was increasing the amount of oil collecting in the catch tank. So Nakamura designed a new tank that releases more blow-by gases and equalizes crankcase pressure better.

The chassis required much less work, and the specs are the same as when we briefly covered the bike a couple of years ago. Corner grip is certainly not an issue: Nakamura has just redesigned the clutch cover, which was getting ground down to the bolts. 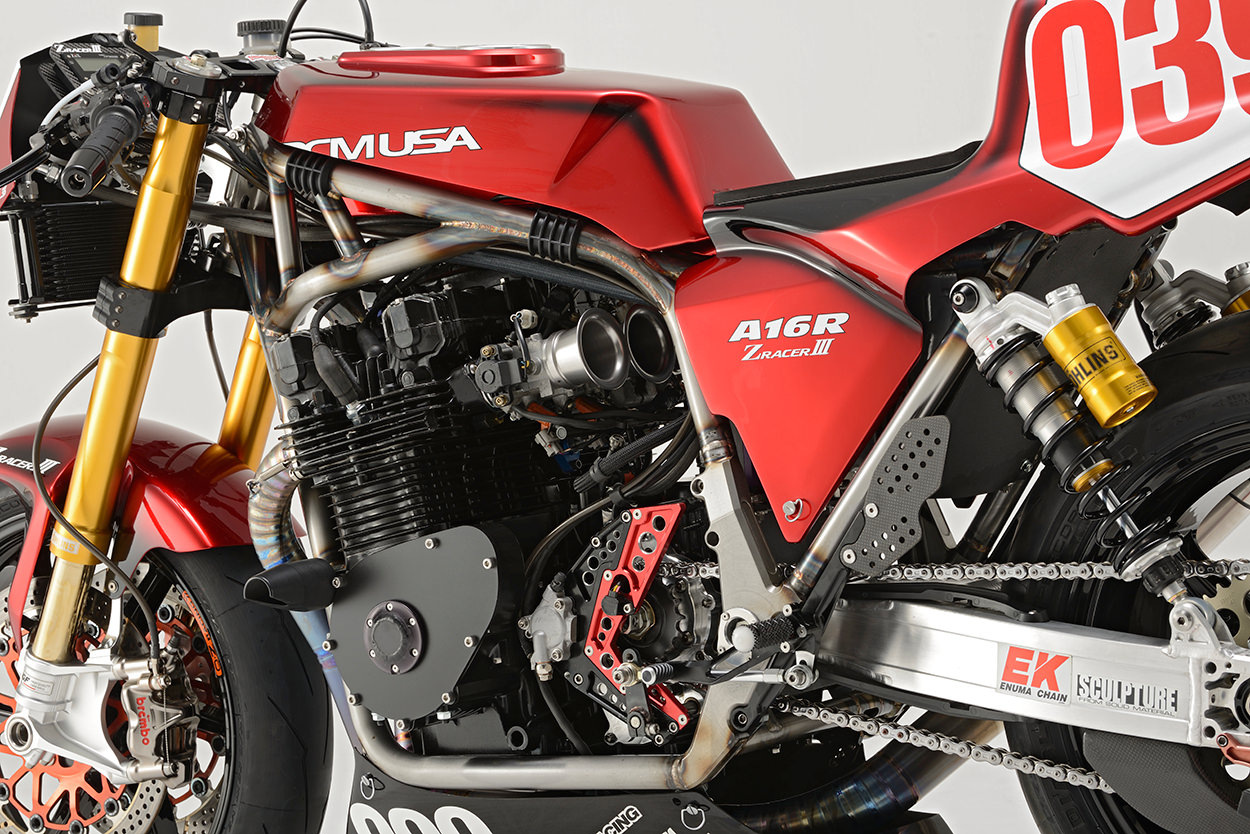 The frame is AC Sanctuary’s own design, rather than a modified Z1000 original—which would flex too much. The back wheel is secured with a Sculpture aluminum swingarm, and the 17-inch wheels are magnesium alloy units from the Italian specialists OZ Racing. The tires of choice are Pirelli Diablo Supercorsa slicks, in a soft SC1 compound.

There’s Öhlins suspension at both ends—with a pair of conventional piggyback shocks supporting the rear, rather than a contemporary-style monoshock. Brembo brakes clamp onto Sunstar rotors. 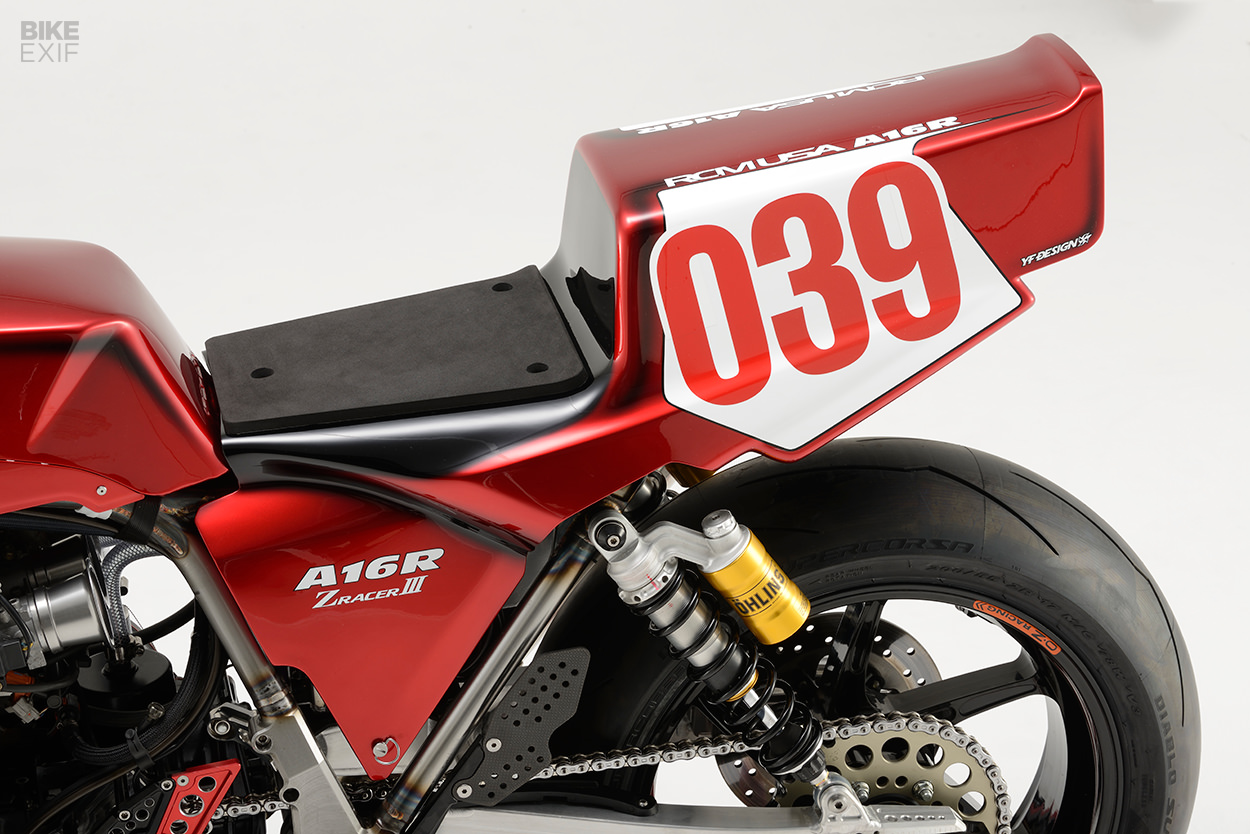 The aluminum bodywork is completely custom. “The tank and seat are reminiscent of the Kawasaki Z from the 1970s,” says Nakamura. “Since the A16 has a twin spar frame, the tank was formed with a two-piece structure—with a shroud at the bottom, for a Z1-R look.”

Above the oil cooler and behind the compact front fairing is a carbon fiber dashboard housing three instruments: a ZiiX Time Attacker digital lap timer, a Yoshimura Pro-Gress digital display for oil and water temperatures and voltage, and an analog tachometer than runs up to 10,000 rpm. 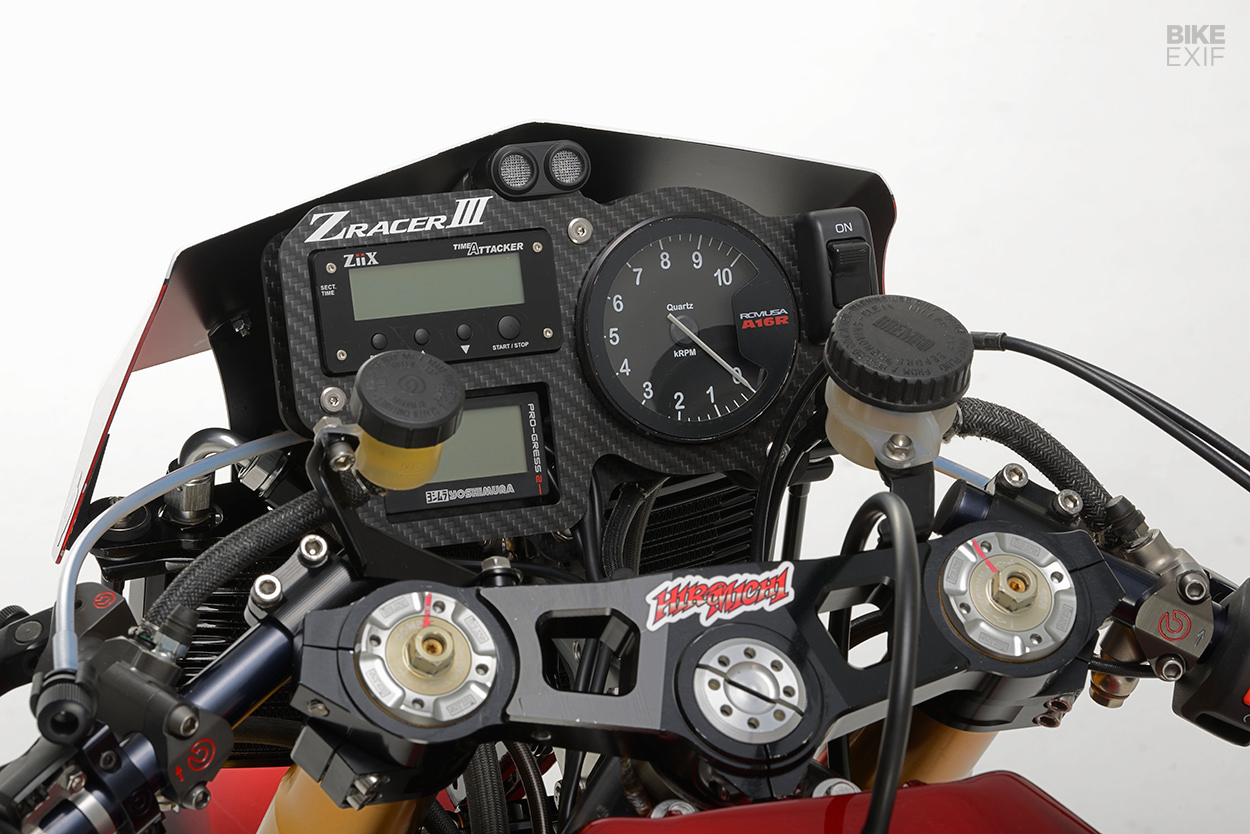 The Z1000 is now almost ready for the circuit, but Nakamura is still hoping to eke out a little more power.

“It is not easy to add even three horsepower, going from 152 to 155,” he says ruefully. “But I feel that there’s a potential spec that can achieve over 155, if the fuel adjustment map and ignition timing are refined.” 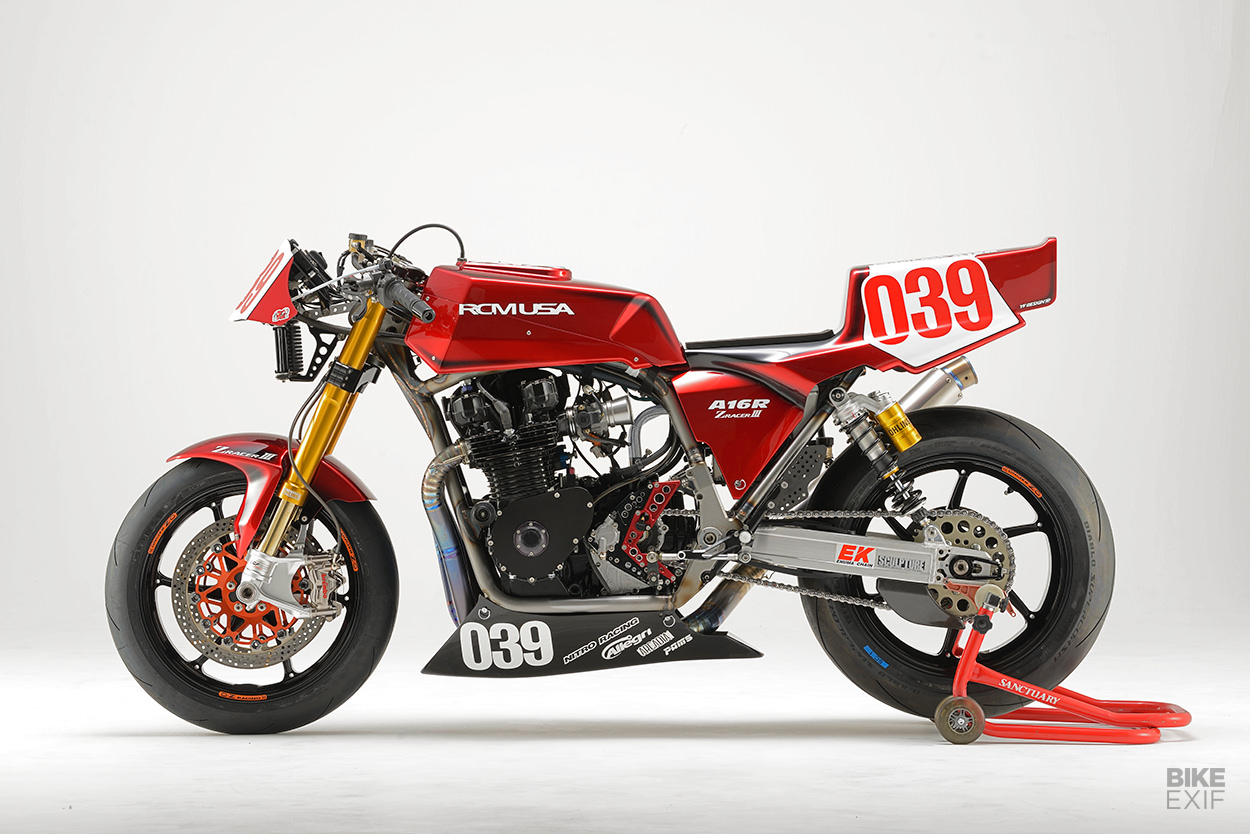 In nine months, the AC16R will have its final outing. And given AC Sanctuary’s legendary reputation for technical prowess, we’d be surprised if it didn’t take home the trophy.

The bigger question is: what will Nakamura and his crew build next? We can’t wait to see. 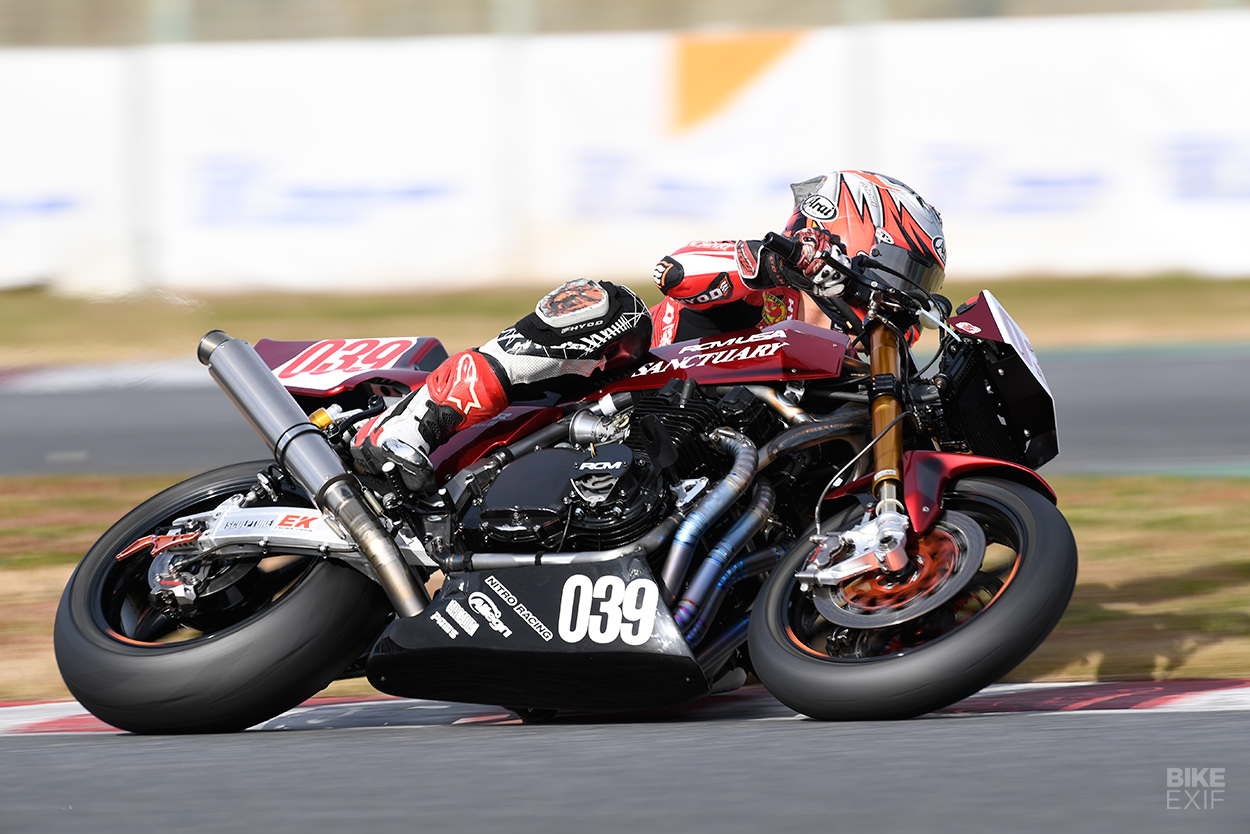