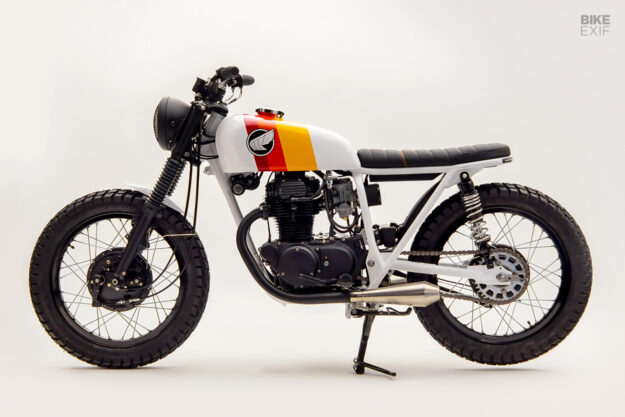 The custom scene is scattered with craftspeople that do more than just build awesome motorcycles. James Fawcett is a prime example. As Slipstream Creations he makes furniture, paints bicycle frames, does ad-hoc welding and fabrication jobs, and even upcycles spark plugs to create coat racks.

He also finds time to build custom motorcycles like this delightful Honda CB360 street scrambler. Thanks to James’ extensive skillset and can-do attitude, he does everything from his workshop in St. Louis, Missouri—right down to paint, powder-coating and upholstery. So other than some part-time help from his son, it’s mostly a solo gig. 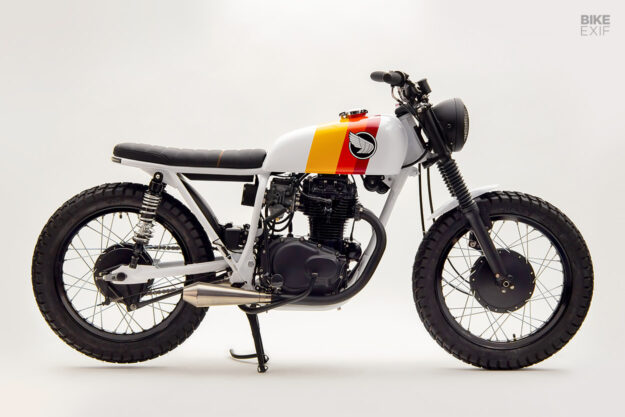 Slipstream’s portfolio is loaded with small-capacity vintage Hondas that are pared-down, tastefully tweaked and finished in vivid liveries. It was one of those builds (a CL350) that caught the eye of this 1974-model Honda CB360’s owner, and prompted him to reach out to James.

“He had begun the journey of building his own custom bike,” James tells us. “But like many of us, a lack of time, tools, and experience caused the project to stall. That’s when he reached out to us to help make his vision a reality.” 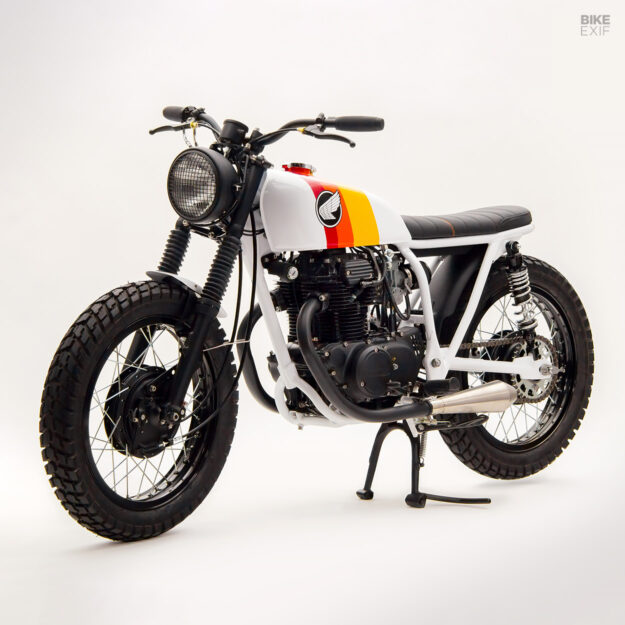 The bike arrived in pieces, sorted into an assortment of boxes and bins. Step one was to inventory the mix of original and aftermarket parts on hand. Once that was done, the guys rolled up their sleeves and dove in.

With the Honda stripped, Slipstream focused on cleaning up the frame. Unneeded tabs were shaved off, and a custom subframe was fabricated with a flush-mounted taillight and turn signal combo LED. 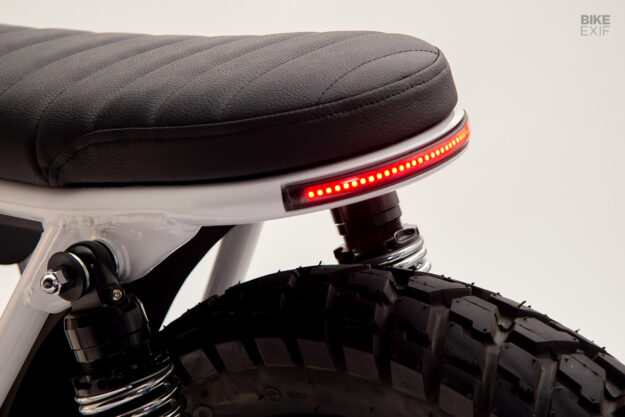 Perched on top is a custom-made seat, with a slim electronics tray tucked underneath. This CB also leans in to the fender-less back-end look, but not at the cost of practicality. Look closer, and you’ll spot a hidden inner fender, mounted to keep dirt out of the pod filters.

The OEM fuel tank is still in play, and looks right at home alongside Slipstream’s other changes. A tiny front fender completes the minimal bodywork. 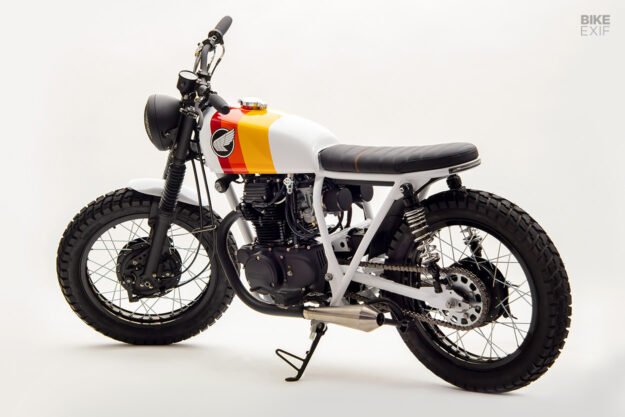 Slipstream’s builds often straddle the line between custom and restomod, and this one’s no exception. Part of that charm is down to how well James blends old and new parts.

In this case, the Honda still wears its original forks, but they’ve been rebuilt. The rear shocks look vintage, but they’re modern units with preload and damping adjustments. And although the original steel rims were swapped for 18” aluminum hoops, they’re still laced to the original drum brake hubs.

Moving to the front, Slipstream installed a classic headlight, flanked by a pair of Motogadget LED turn signals. They also added an analog speedo, new bars with Biltwell Inc. grips, and modern switchgear. 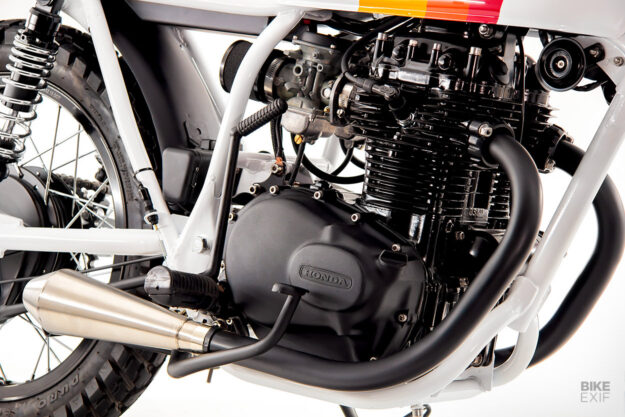 Just two buttons control all the CB’s major functions, thanks to a NWT Cycletronic control unit. There’s a brand new wiring harness too, along with an upgraded regulator/rectifier, a Lithium-ion battery, and an electronic ignition from Charlie’s Place.

The Honda’s motor has been through a major clean-up and repaint too, and runs with a pair of rebuilt Keihin carbs. Slipstream coated the stock exhaust headers with satin black Cerakote, and added a pair of stainless steel reverse cone mufflers. Since they run so close to the bike, the side and center stands had to be modified to make room. 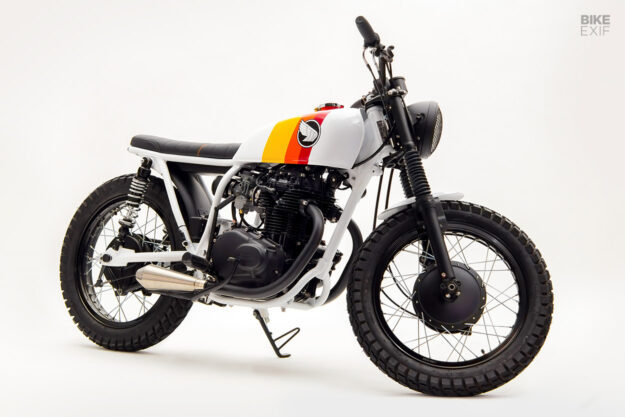 When the time came to paint the bike, James sent the client a plethora of color and graphics options. But in the end, he was so enamored with Slipstream’s older CL350 build, that he wanted something equally vibrant.

James obliged, coating the frame in white, and hitting the tank with a red, orange and yellow livery. The tank logos are a variation on Honda’s traditional ‘wing’ logo. A subtle hint of colored stitching on the seat adds an extra touch. 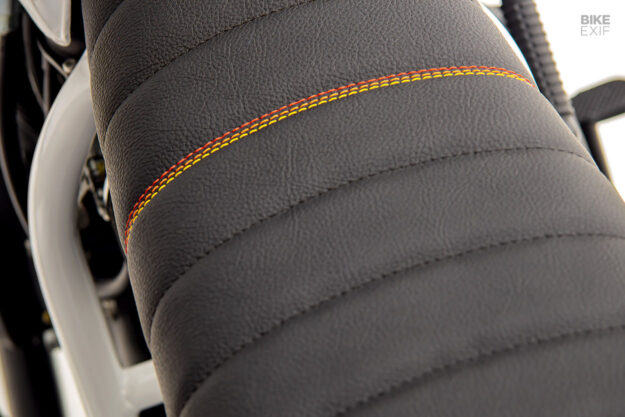 Slipstream’s take on the humble CB360 is a fun mash-up of old and new, and a great example of how to tweak a classic Honda twin. James is already hard at work on the next two bikes; a CL360, and a Suzuki VanVan with 14” rims and fat tires. 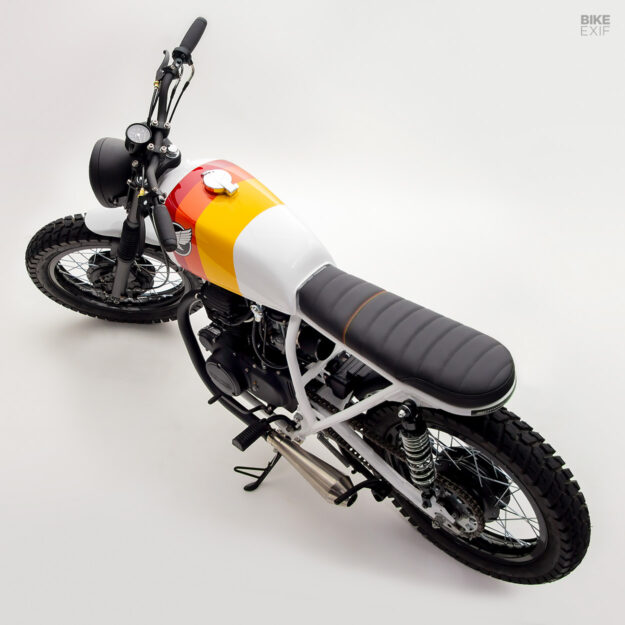