For this round of gear reviews, we’ve picked kit that gets the job done with tech that doesn’t scream at you. We’ve got the first MIPS-equipped helmet from Icon, new Saint denims with hidden armor, and a radical navigation unit from Beeline Moto that could fit inside a whisky tumbler.

The injection-molded Polycarbonate shell has an aggressive street vibe to it, with sharp contours that pull focus towards its unusual shield design. As radical as it is unapologetic, it extends all the way down to the bottom of the chin bar, with vents cut into the mouth area.

On other Airflite colorways with more contrast, the look is jarring. But the Stealth is black-on-black: the top half is glossy, while the bottom wears Icon’s signature ‘Rubatone’ matte finish. It comes with a dark smoke shield, a spare clear shield in the box, and minimal branding, so the effect is subdued and edgy at the same time.

Icon sent me reflective chrome and gold shields to play with too; when installed, the Cobra Commander and Daft Punk references are unavoidable. But out the box, the Airflite Stealth lives up to its name.

The big shield has a really wide field of view, and latches down at the very edge of the chin, rather than on the side. It feels weird to secure it there at first, but now that I’m used to it, I find it far user-friendlier than any other helmet on my shelf.

There’s an optional peak for the Airflite too, which attaches in seconds to convert it into a motocross style lid.

Intermediate-oval to round helmets fit my head well, but the Airflite sits more on the intermediate to long-oval side of the spectrum, and is built snug. So it was really tight going on the first time, and, even though it’s now broken in, it still sits snugger than my Icon Variant Pro or Airform. It’s worth double-checking your head size and shape before you buy.

Inside, there’s a dropdown sun visor and the same moisture-wicking HydraDry liner that Icon uses on all of their helmets. I have two other Icon lids and can testify to the liner’s efficacy—none of them stink, despite frequent use. The Airflite scores high on ventilation too, with closable vents at the chin and temples.

However, all this comes with a weight penalty: my XL lid is listed at 1,720 grams. But there’s a hidden feature that makes the Airflite Stealth an attractive option: MIPS.

MIPS (Multi-directional Impact Protection System) is a clever bit of tech, designed to mitigate damage from rotational impacts to the head. It’s basically a thin liner that lets your head shift slightly within the helmet during an angled impact, reducing the amount of force transferred to your brain.

The inclusion of MIPS pushes the price up, but just a little: the Stealth and the two other MIPS-equipped Airflite colors come in at $320, with the non-MIPS versions costing $295 (graphics) and $250 (plain colors). But it does add extra piece of mind to the Airflite’s existing DOT and ECE ratings.

The Airflite Stealth’s savage vibe isn’t going to float everyone’s boat. But if safety is important to you, it’s a feature-rich lid that’s worth a look. 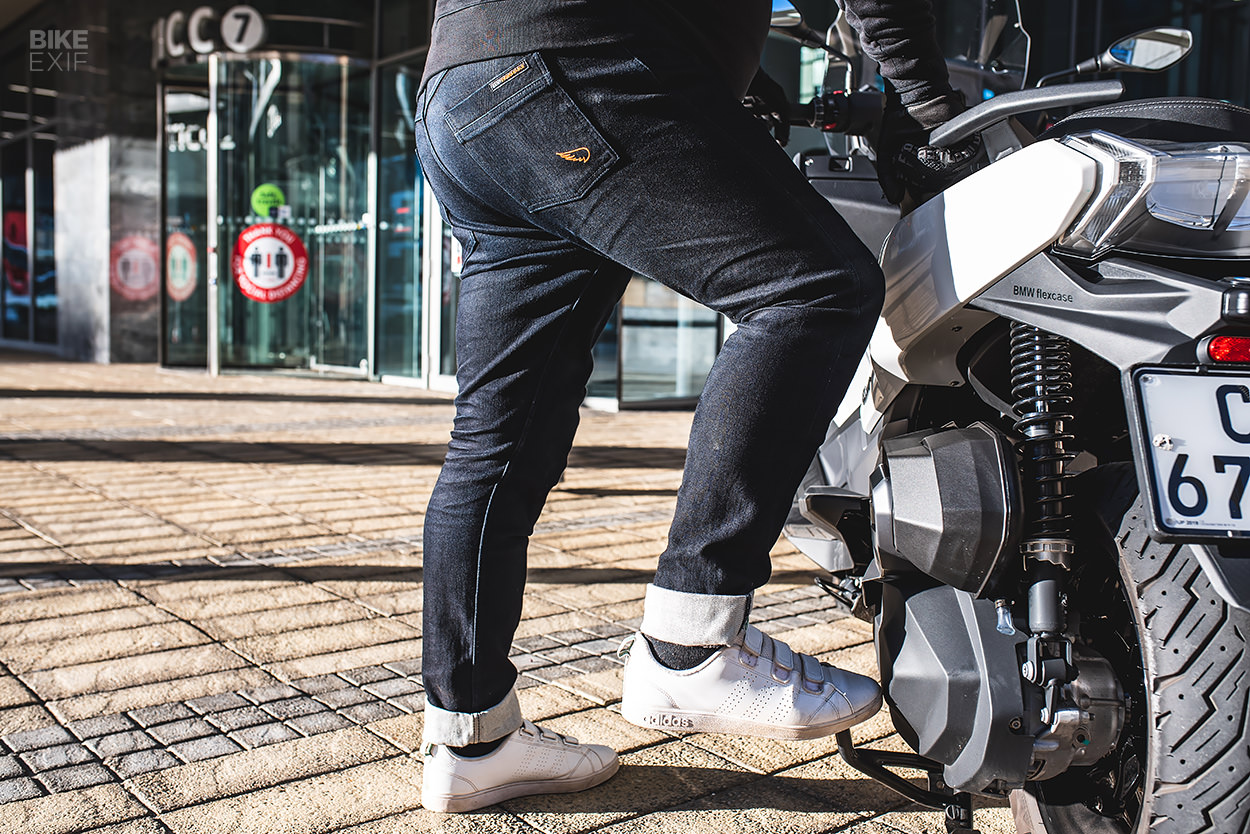 Saint Unbreakable Slim armored jeans The Australian company Saint has been sending me riding denims to test almost since they first started out. My all-time favorites are their Unbreakable Stretch range—all the style and comfort of the Levi 511, but with slide protection baked in.

Saint have now taken the Unbreakable Stretch up a notch, by adding armor without adding bulk. 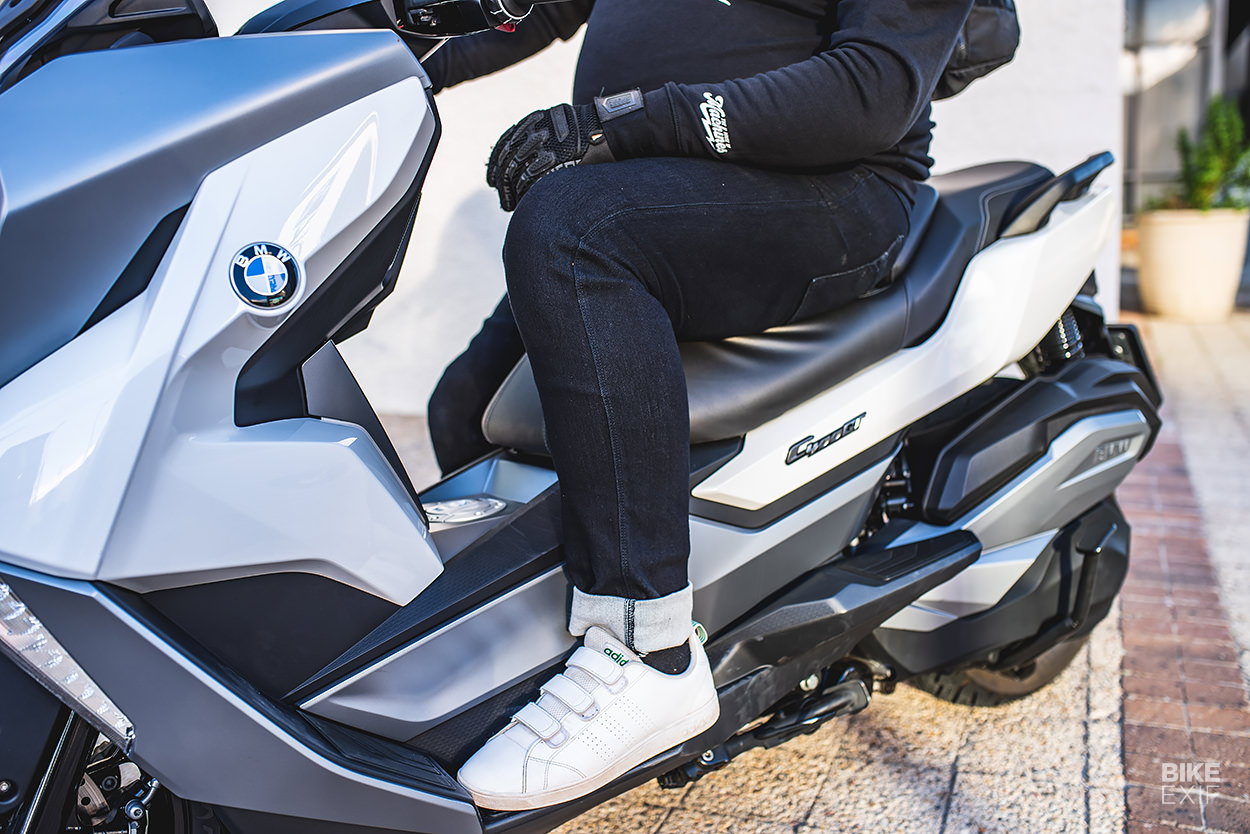 The denim is woven with Dyneema—a super strong material that adds abrasion resistance without the need for extra layers. And the Unbreakable is cut just like I like my casual jeans: slim without being skinny, with a relaxed crotch and a tapered leg. They fit true to size too, but only come in a 33-inch length, so you might need to turn them up.

You can chose between black or a really dark indigo (which I’m wearing here). I have an older pair of Saint jeans in this same color, and it’s a killer finish that fades beautifully. 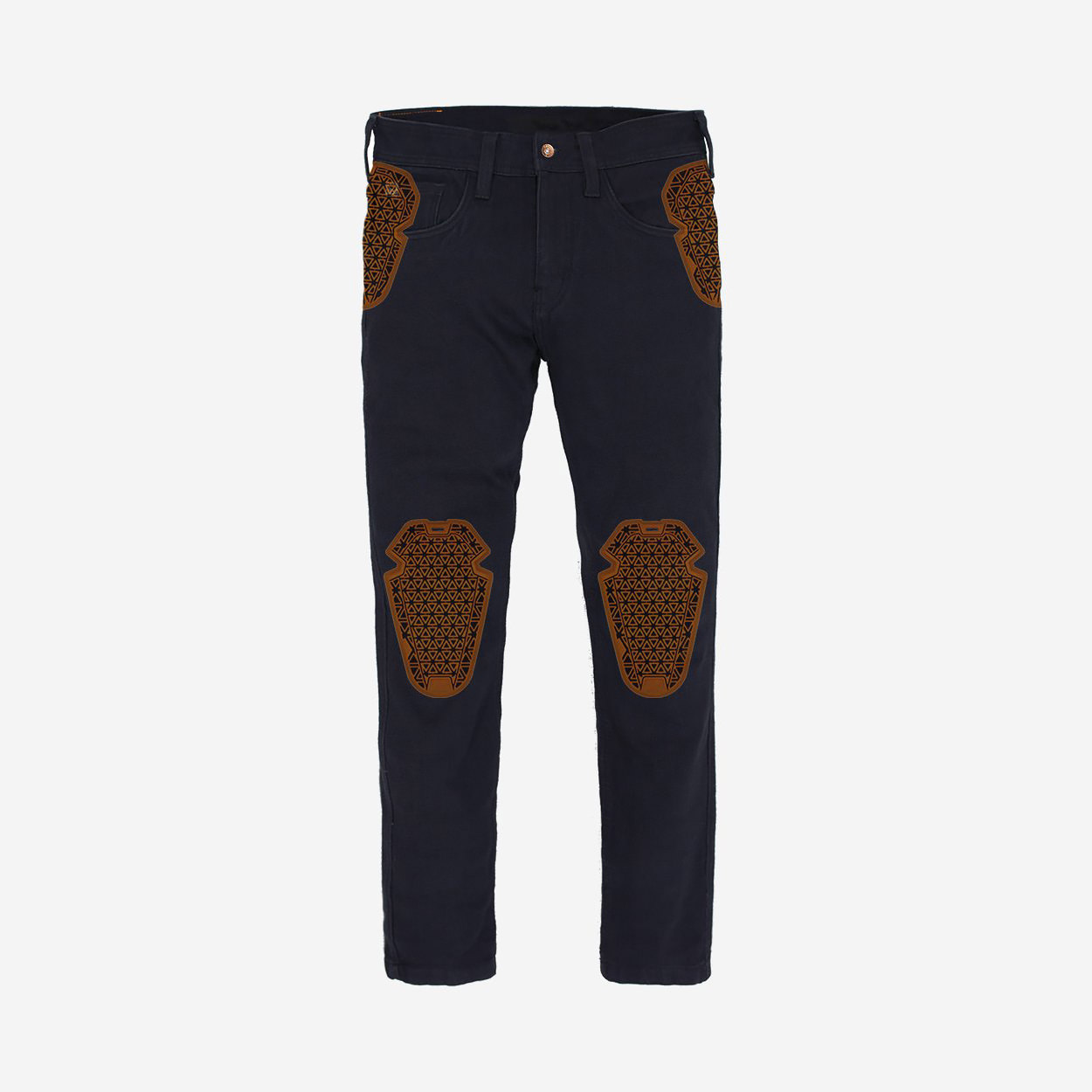 These armored versions include pockets to fit D30’s ridiculously low-profile ‘Ghost’ protectors at the hips and knees. They’re easy to install, with two height options at the knees. And once they’re in, they’re skinny and flexible enough not to hinder movement or comfort.

If I had to nitpick, I’d like to see Saint fettle the knee armor pockets a bit. The way they’re ‘suspended’ in the pant legs means that you need to be careful not to slip your leg in on the wrong side of them. And some side-to-side adjustment would be handy, because the protectors sit just off center for me. 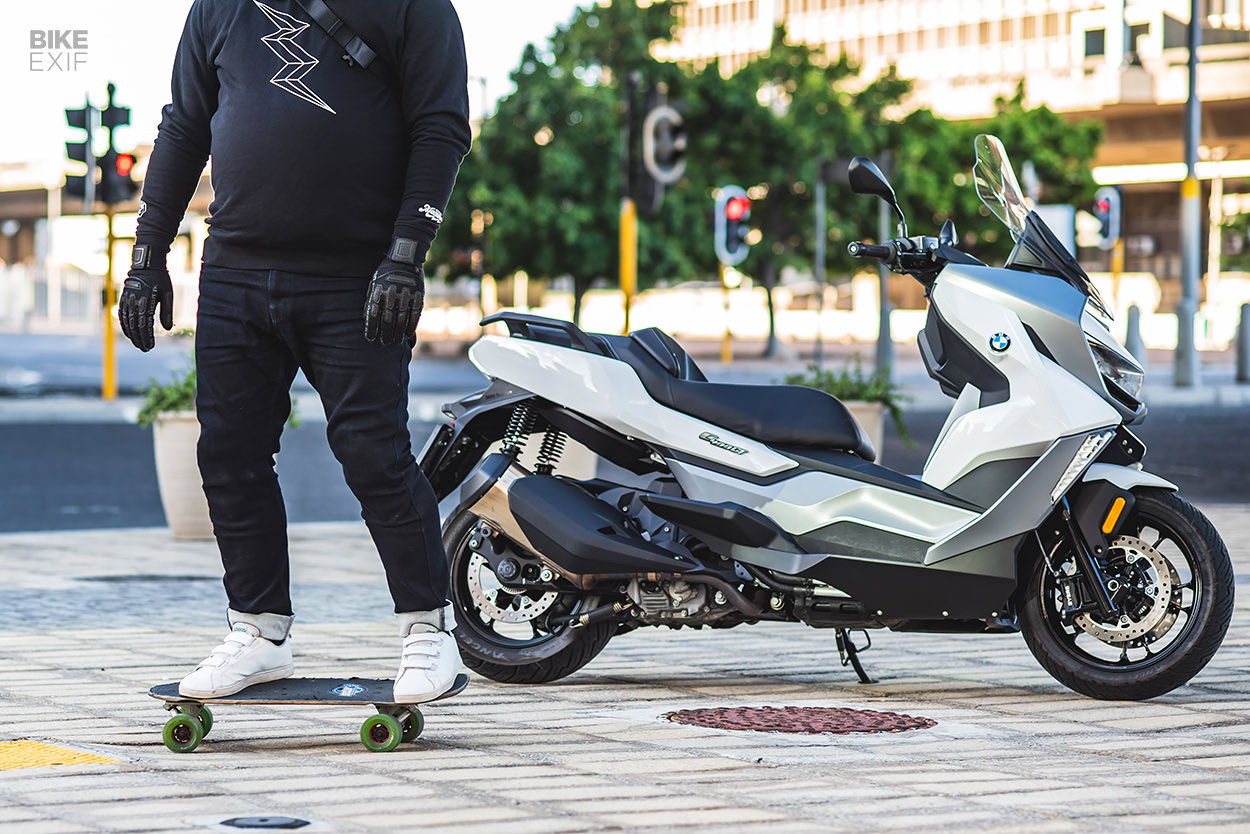 At $380.60 the Unbreakable Slim ain’t cheap, and you also have to buy the hip and knee armor separately. But if you can afford them, they’re a good looking and protective choice. 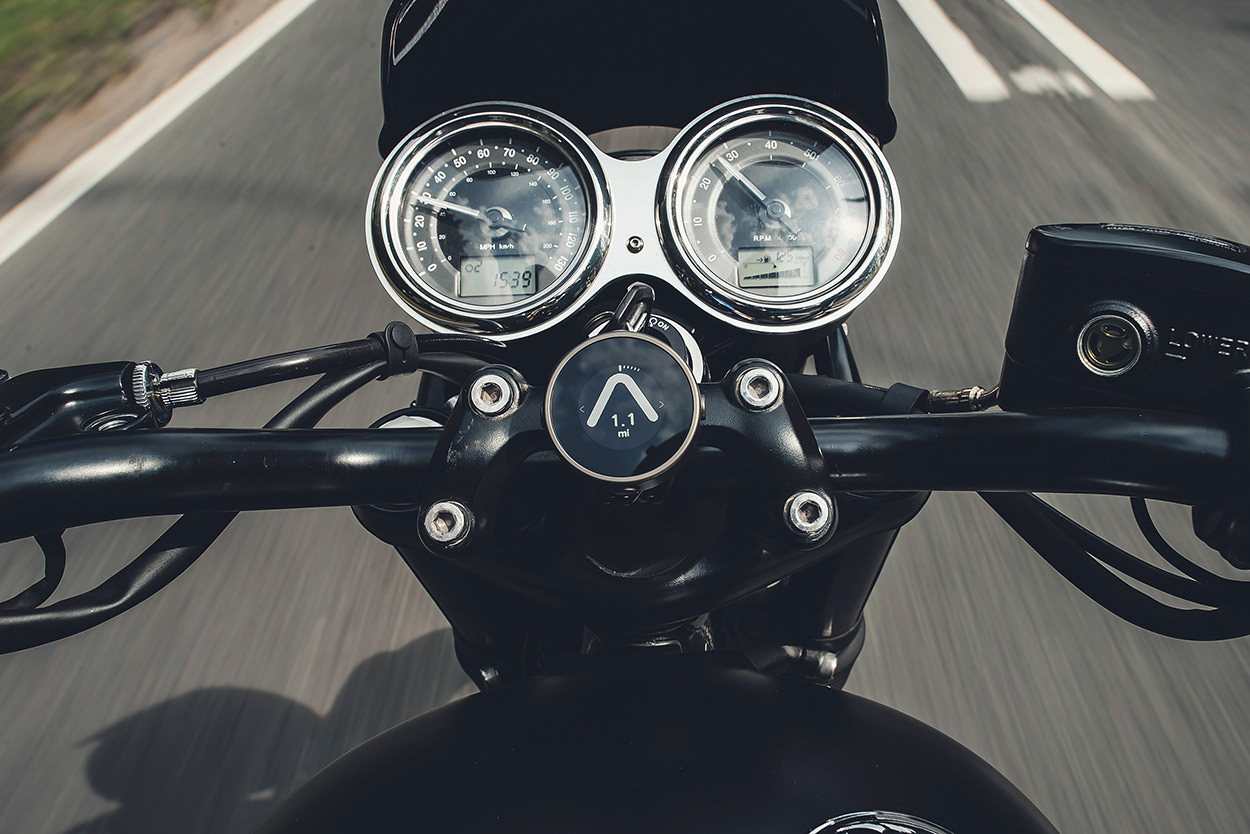 Beeline Moto motorcycle navigation device Riding a motorcycle is an opportunity to escape the screens and technology that plague our everyday lives. But the most common choices for motorcycle navigation systems are yet more screens, in the form of handlebar-mounted GPS units or phone mounts. But riders can’t afford to be distracted by random text notifications or pop-up banners.

Enter the Beeline Moto navigation device. It’s an incredibly minimal, durable and easy to use gadget, which does the job of pointing you in the direction you need to go—without any gaudy, complex setups. 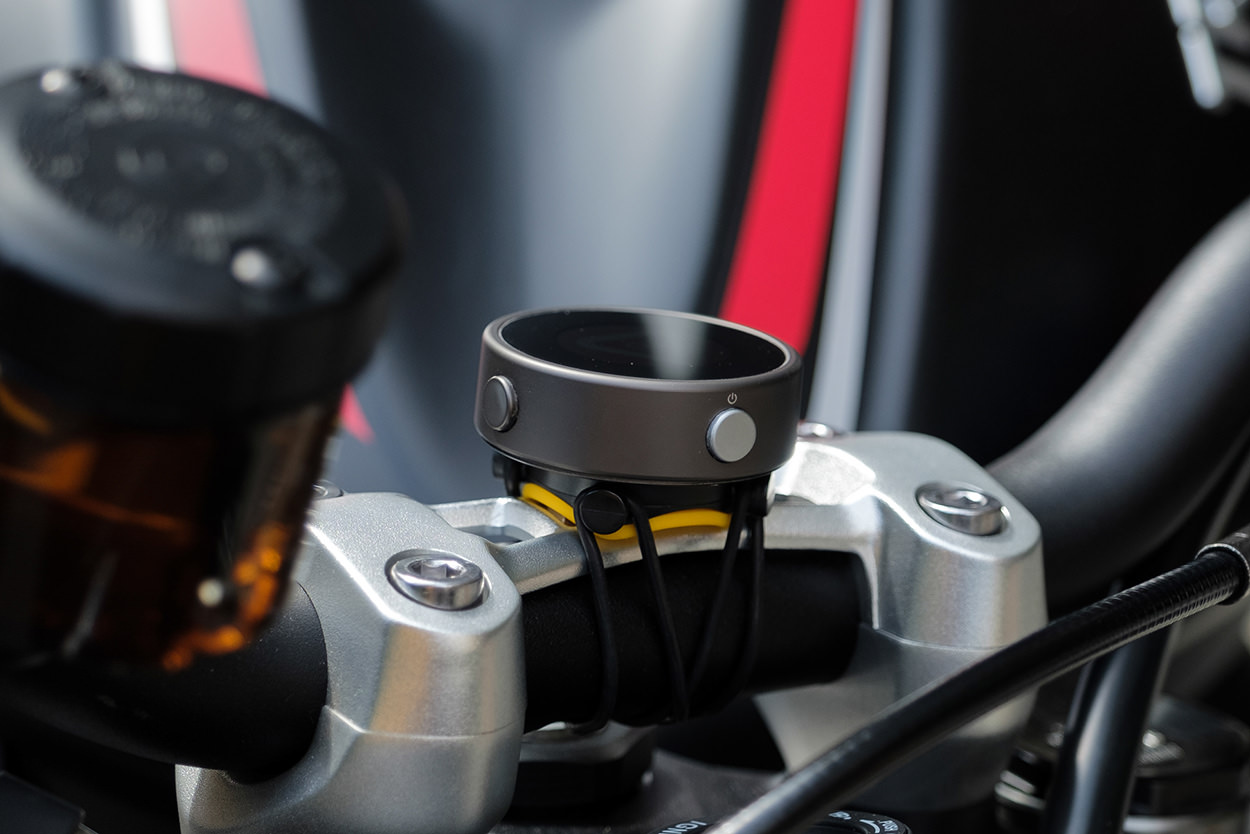 The device is a small and round, measuring less than two inches across, and weighing 2.92 oz. It’s available in black (£149), or with a metal casing in either gunmetal or silver (£199). It comes with a basic universal mount, which uses two strong elastics in the form of an ‘X’ to attach to most handlebars without requiring tools.

Most people probably won’t even notice it’s there, so it won’t detract from the aesthetic of your bike or your desire to disconnect. I often roam the twisty back roads of New Hampshire on my Ducati Monster 796, and on occasion I get lost. The gunmetal grey unit looks right at home, mounted dead center on the Monster’s bars. But it does pick up a little vibration from the air-cooled motor, so I’ll be looking at some of Beeline’s upgraded mounts. 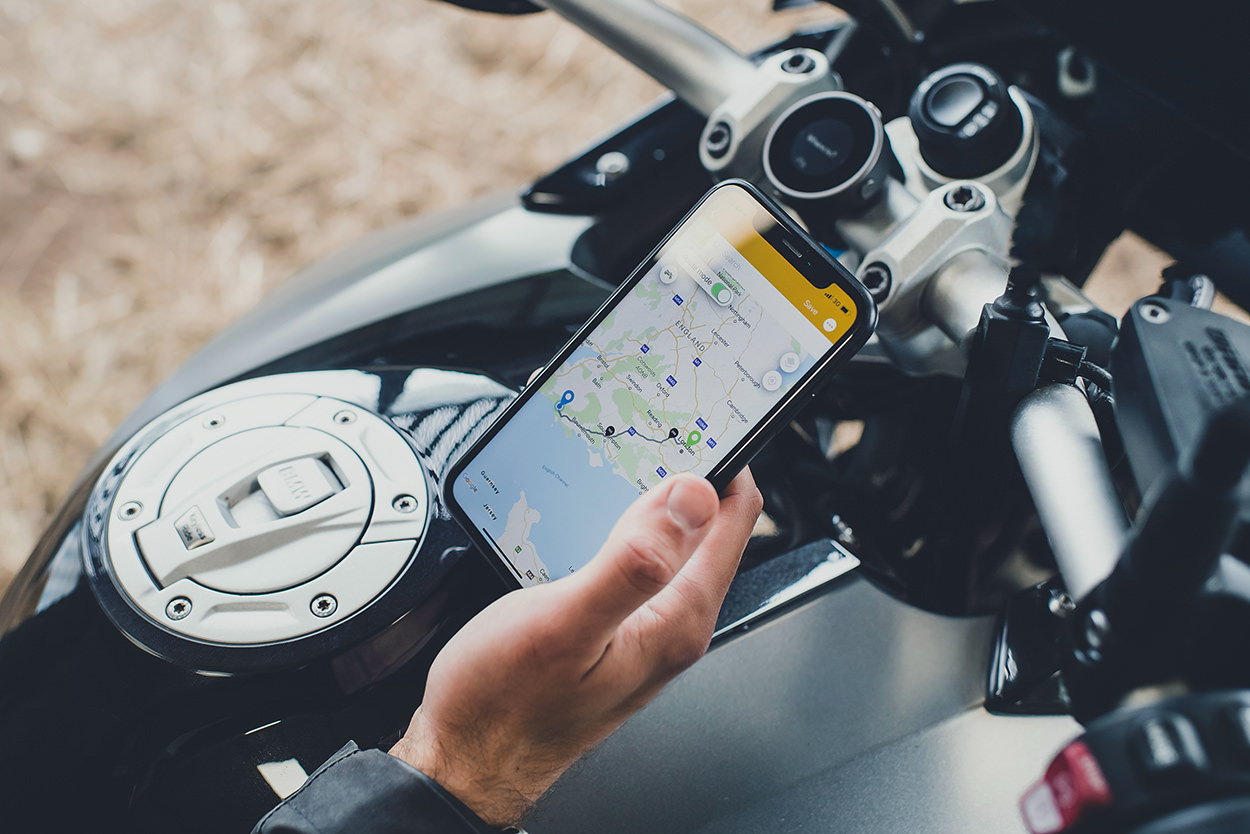 The device connects to an app on your smartphone via Bluetooth, which then spits out turn-by-turn navigation instructions on the display. You can set an actual route, or tell it to simply point at your destination as the crow flies, and figure the rest out yourself. The display can also flick between a GPS speedometer, trip meter, clock, and compass.

And that’s the extent of it. The simplicity, both in look and in operation is what makes this little thing truly special.