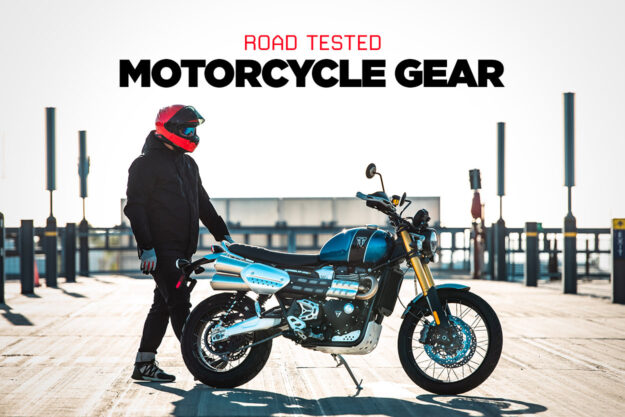 In our continuing quest to source motorcycle gear that combines safety and style, we bring you our thoughts on Shoei’s new ECE 22.06-approved NXR2 helmet. Plus a stealthy riding parka from Akin Moto, and the perfect pair of urban riding gloves from Rev’It!. 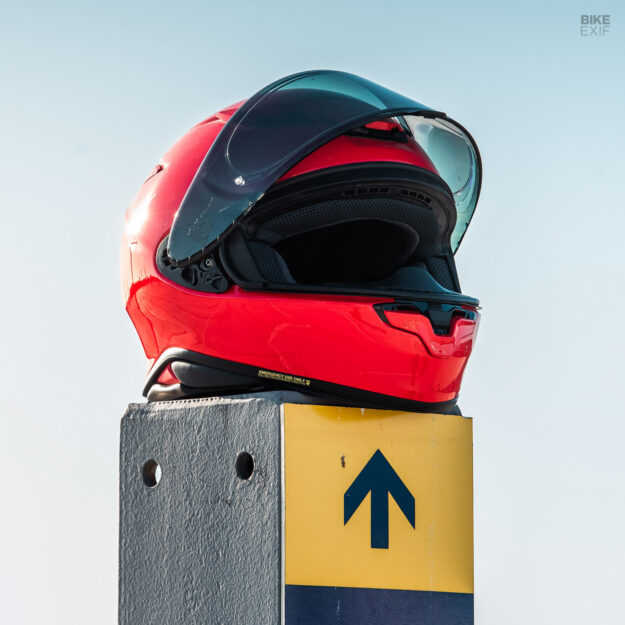 Shoei NXR2 helmet It’s no secret that I’m a huge fan of Shoei’s helmets. Every Shoei I’ve owned has fit and felt right from the first wear, with no major deviations in their sizing or shape from model to model. So when I was looking for a do-it-all street helmet to replace my well-used Shoei RYD, the new NXR2 was a no-brainer… and it hasn’t disappointed.

I loved the RYD for its combination of neutral styling, comfort and ventilation. The NXR2 basically feels like a premium version of the RYD; it has the same clean aesthetic, but ramps up the performance. And it’s one of the few helmets that meet with Europe’s new, and more stringent, ECE 22.06 standard. 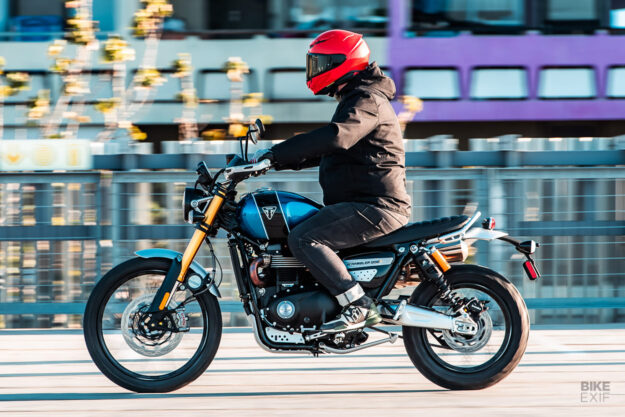 Most of my helmets are black or white, but I went off-brief this time and picked the NXR2 in bright red instead. It also comes in a few solid colors that are more muted, and a whole bunch of graphic options that are a bit racer-ish for my taste. The glossy red finish looks great in the light of day, and has the added bonus of being extra visible out on the road.

The NXR2 is comfy straight out the box, as I knew it would be, with no apparent hotspots. Shoei make it in five different shell sizes, with various cheek pad thicknesses available. The liner is plush and moisture wicking, plus fully removable and washable. There are also recesses for comms system speakers, and tabs under the cheek pads, so that they can easily be removed by first responders in case of an accident. 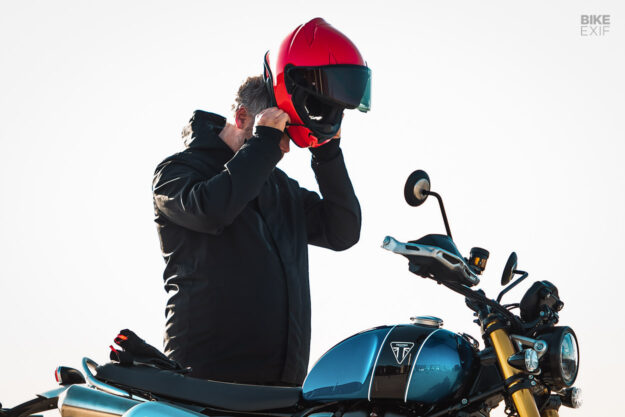 I haven’t tried removing the liner yet, but I have swapped out the face shield and it’s a cinch—as was installing the supplied Pinlock visor insert, chin curtain and breathing guard. There’s great visibility through the shield, and the Pinlock system does a cracking job of keeping it fog free.

There’s a solid feel from the shield when opening it, as it clicks through its various positions. Once closed, it secures via a tab located at the front of the helmet, with a button to release it again. It’s easy enough to operate, but it also feels odd—like something that was fixed without being broken. I can’t really fault the system though, even if I do wonder about the longevity of the button. 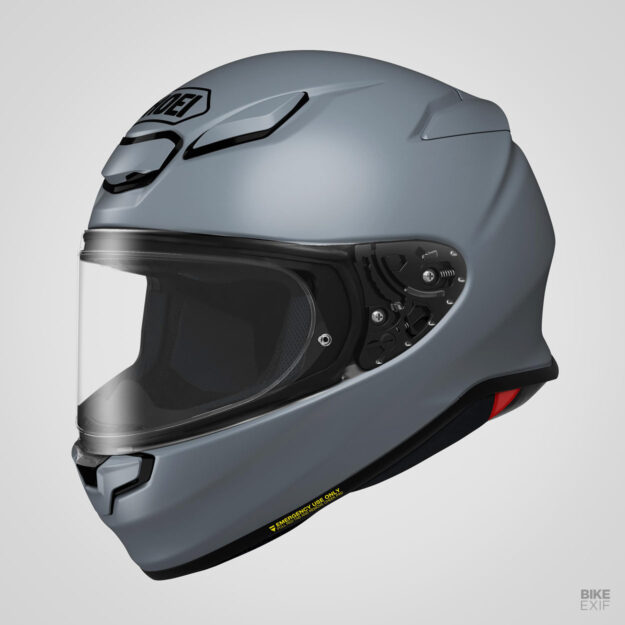 There’s no internal drop-down sun visor on the NXR2 (you’ll have to look elsewhere in the Shoei range for that). A double D-ring strap keeps the helmet locked in place.

Where the NXR2 really scores high, is on aerodynamics. It’s the best helmet I’ve found so far for riding naked bikes, or bikes with short windscreens. It’s also quiet out on the road, and my XL lid weighs in at a reasonable 1.57 kilos [3.46 lbs].

It’s loaded with plenty of vents too. There are five operable vents at the front, with a broad spoiler hiding a generous exhaust vent at the rear. Between the vents and the sweat-friendly liner, my NXR2 still smells box fresh. 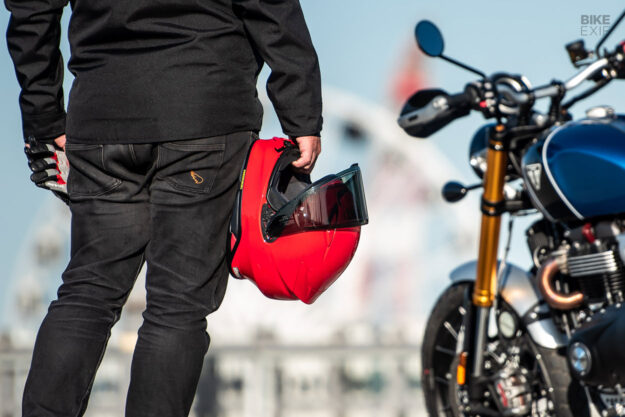 I have only one nit to pick, and it’s extremely petty. The section of the liner that runs across the brow is ever so slightly loose, and needs to be pushed back into place once in a while. It doesn’t affect safety or comfort, but it does trigger the perfectionist in me.

I probably wouldn’t notice it if the rest of the NXR2 didn’t score so highly everywhere else. And it’s certainly not a deal breaker; when the time comes to replace my NXR2, I’ll probably reach for the NXR3 (if it’s out by then).

* The NXR2 is sold as the RF-1400 in the USA, with slight differences in construction. 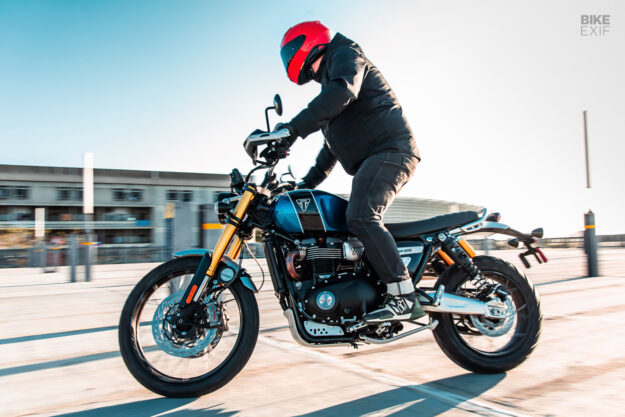 Akin Moto Alpha 3.0 jacket A lot of gear companies throw around the old “by riders for riders” tagline, but it doesn’t always count for something. The Australian company Akin Moto gets it though. I’ve been riding in their new Alpha 3.0 jacket for a little while now, and it’s clear that a ton of thought went into it.

I’ve been on the hunt for a parka-style motorcycle jacket that’s cut longer, built roomy, offers both warmth and protection, and is stealthy enough to suit any sort of bike. And Akin pretty much read my mind. 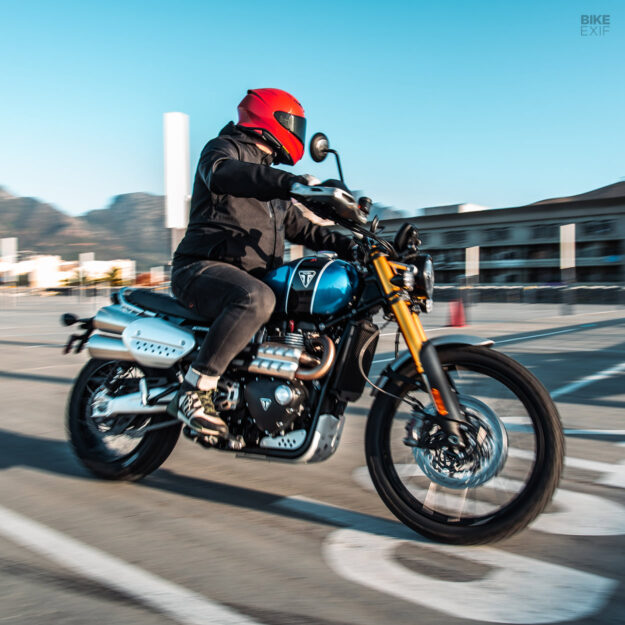 My biggest hassle with motorcycle jackets is usually finding something that fits my dad bod, without having to size up so much that my arms are drowning. Akin’s sizing is conservative; I checked their size chart and ended up with a 3XL, a size up from most jackets I wear. But their size chart works, and their 3XL fits perfectly.

It’s predictably a little snug around my belly, but not so much that I look like an avocado with legs. If you’re in better shape than me, the Alpha 3.0 should feel roomy without being baggy, unlike much of the slim fit gear out there right now. 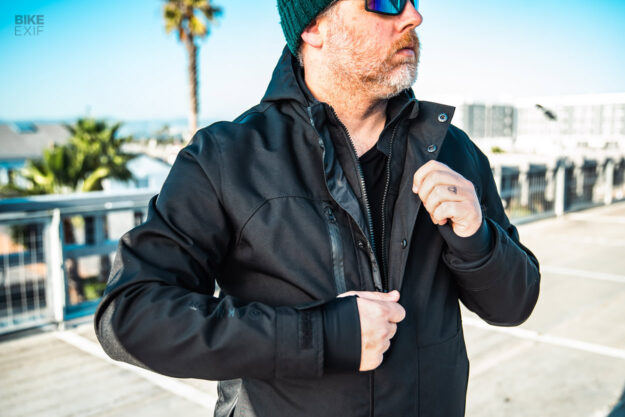 The outer shell of the Alpha 3.0 is a tough 600D fabric, with a membrane behind it to make it waterproof. It uses a seam-taped construction, with waterproof YKK zippers all around. Akin are serious about bad weather, so there’s a burly (but sometimes fiddly) storm flap up over the main zipper, secured via press studs. There’s also a zip-out thermal liner that adds extra warmth without too much bulk.

As implied in the name, this is the third iteration of the Alpha jacket—so rider-friendly features abound. The main zipper is a double-sided affair, so you can split the bottom of the jacket open if it interferes with your fuel tank. There are two pockets inside, plus a Napoleon pocket on the outside that’s dead-easy to get to with your left hand. The hand warmer pockets lower down are lined with a soft fabric, and have zippered closures. 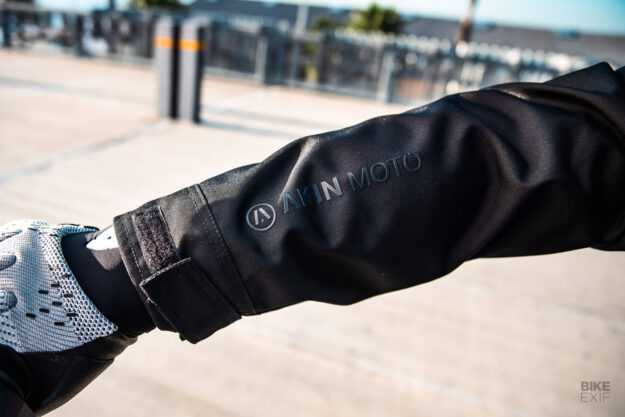 The wrists cinch down with big hook-and-loop adjusters, which I love. They’re easy to use with gloves on, and give you the freedom to lock them tight or let extra air in.

Inside the cuffs are fleece wind gussets, with extra neoprene ‘socks’ that secure over your thumbs. They’re there to keep the sleeves from riding up and keep you warm, but the down side is that they can get in the way—especially when you’re trying to secure the thermal liner’s cuffs, which attach via little loops inside the sleeve. I’m on the fence, and wonder if the jacket wouldn’t be as good without them. 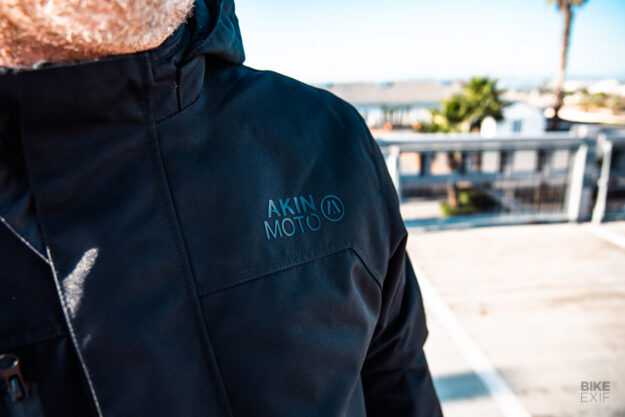 The Alpha 3.0’s monochromatic styling is right up my alley, with super subtle black-on-black branding. There’s not much use for a hood on a motorcycle jacket, but I like the look of it, and it’s removable too. It also doesn’t flap around much while riding—though having some way to lock it down would be smart.

It also has pockets for shoulder, elbow and back armor, but it’s all sold separately. I managed to cram in some D30 protectors I had lying around—but ultimately I’ve never been a fan of the hassle of speccing jacket armor separately. 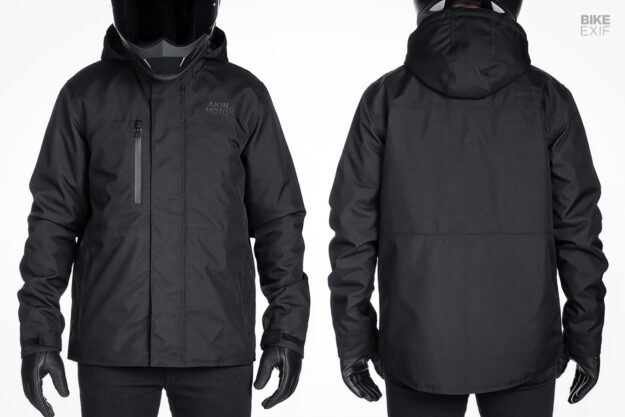 I’ve worn the Alpha on everything from scooters to adventure bikes, and it’s a remarkably versatile piece of gear. I reserve it for cooler to miserable days though. Akin have built in a pair of armpit vents (without them it gets stuffy in heat quickly), but ultimately the Alpha 3.0 gets better as the weather gets more grim.

I’m a fan of the Alpha 3.0 as is, but I’m sure Akin Moto aren’t done with it yet. If I had a wishlist for the Alpha 4.0, it would include more vents, a way to secure the hood, and a rethink of the sleeve gussets. 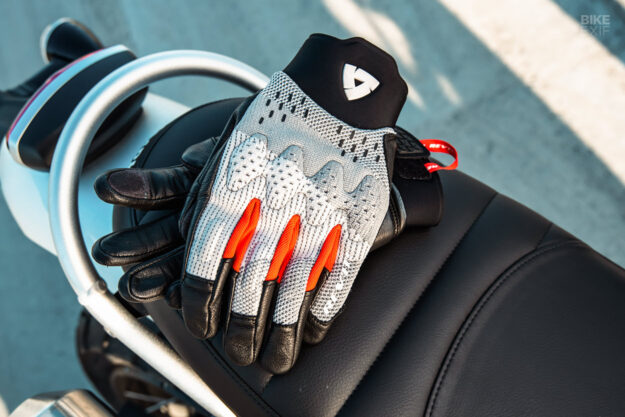 Rev’It! Kinetic glove The Dutch brand Rev’It! has been tapping into a new aesthetic of late: urban-focused gear that takes cues from adventure riding and tech gear. And their Kinetic glove is probably the best example of this. Available in both muted and lively colorways, it’s a short-cuff motorcycle glove that packs in more protection than most in this style. 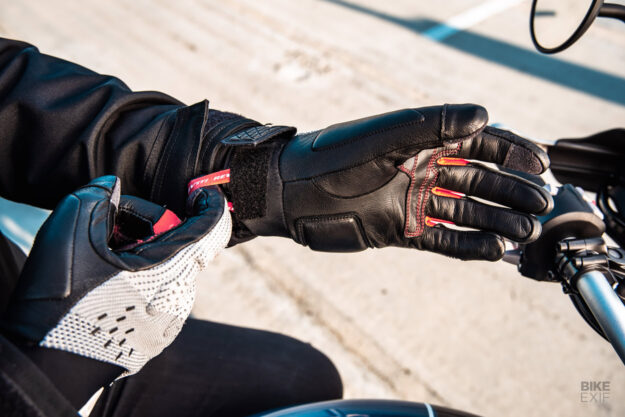 The Kinetic combines a goatskin leather palm with a mesh knit upper and a neoprene cuff—which means it’s supple and comfy out the box. It’s a snug fit though, and some of the seams feel a bit rigid against your fingers as the glove breaks in.

The Kinetic uses a simple hook-and-loop closure to secure it at the wrist, along with a grabbable loop to help you pull it on. It’s a clever addition, and the loops on my gloves have yet to show any sign of wear—despite some deliberately hard tugging. 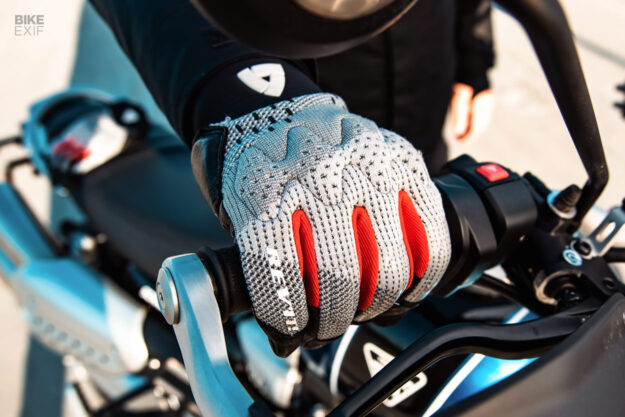 Rev’It! claims that the mesh knit fabric provides airflow, but it’s far less perforated than it looks. It is airy enough to keep the Kinetic from feeling stuffy—but ultimately this glove is best suited to the ‘tweener seasons, or moderate summer/winter days.

There’s a substantial enough foam knuckle protector up top, and if you flip it over, you’ll find extra protection via a couple of reinforced foam pads, and a section with the company’s proprietary PWR Shield fabric stitched in. The thumb and index finger tips also wear a touchscreen compatible fabric; this feature is hit-and-miss on most gloves, but here it actually works. 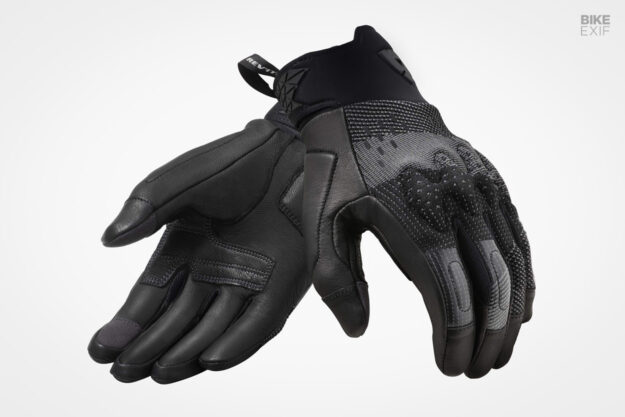 Rev’It!’s branding is bold without being overbearing, via a rubber version of their logo bonded to the cuff and subtle text on the pinky finger. I’ve used the Kinetic for everything from running errands in the city to negotiating rough pine forest trails, and score it high on style, comfort and versatility. The grey version I have adds a nice contrast to the mostly black gear I usually wear—but I wouldn’t mind snagging another pair in black for those days that I want to keep things stealthy.

Love Slick styling, handy pull-on loops and touchscreen tips that work Watch out for Those finger seams; they need some breaking in Price $109.99 | Buy 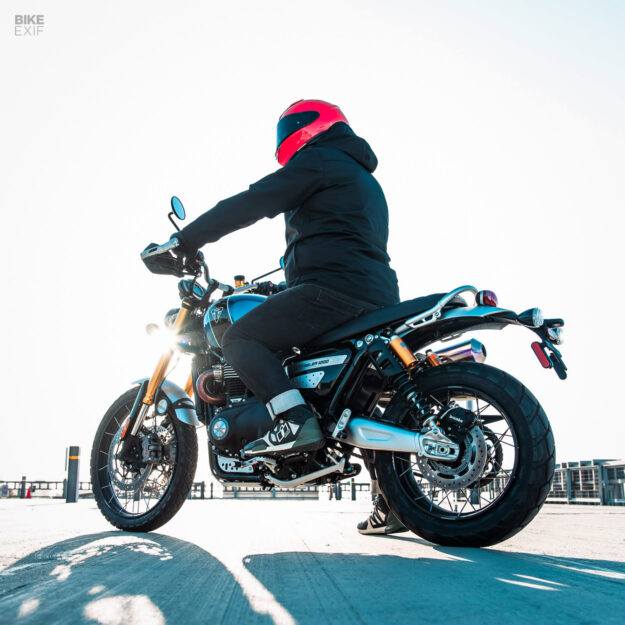 Images by Devin Paisley | With thanks to Triumph Cape Town