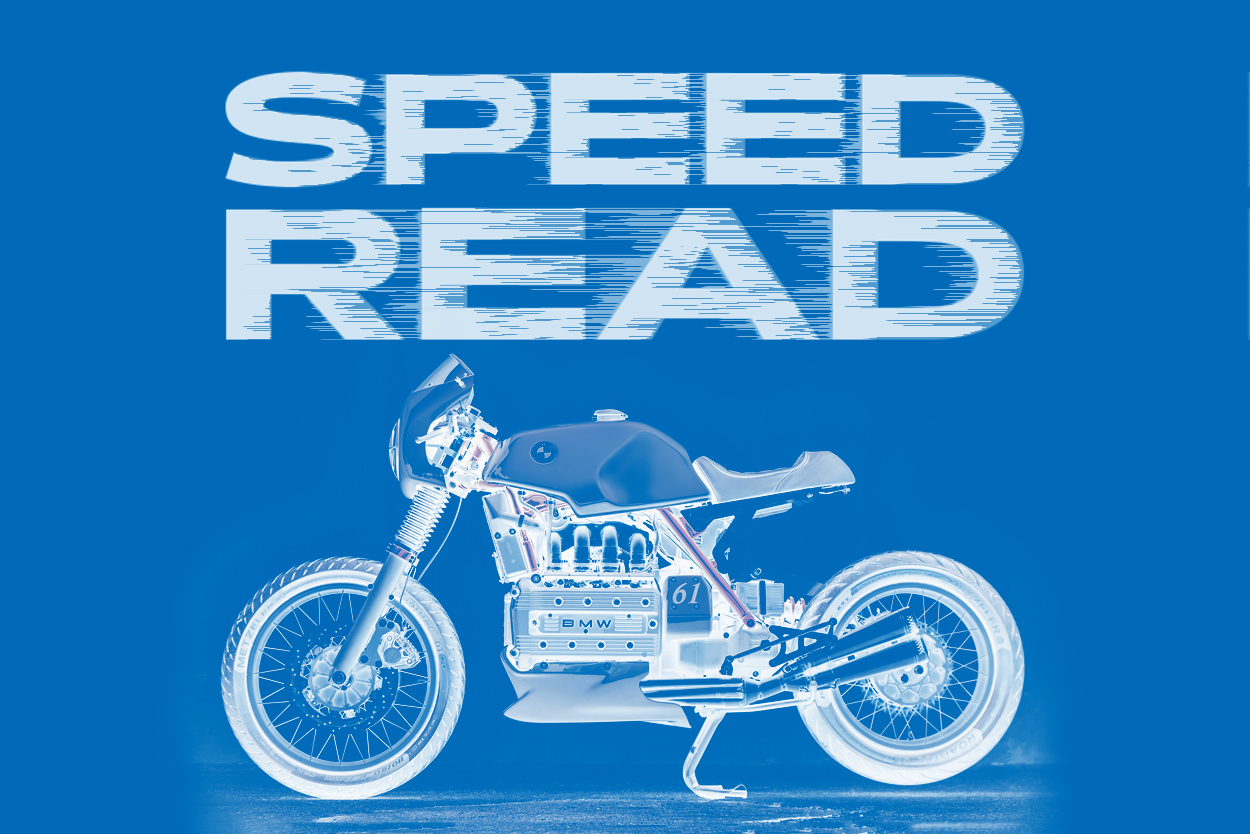 We’re racking up the air miles this week, with a stunning new build from the top Japanese workshop Hidemo, a new chapter in the saga of the Easy Rider bikes, and a crisp BMW K100 from South Africa. Plus a trio of sweet limited editions from the European brand Husqvarna. 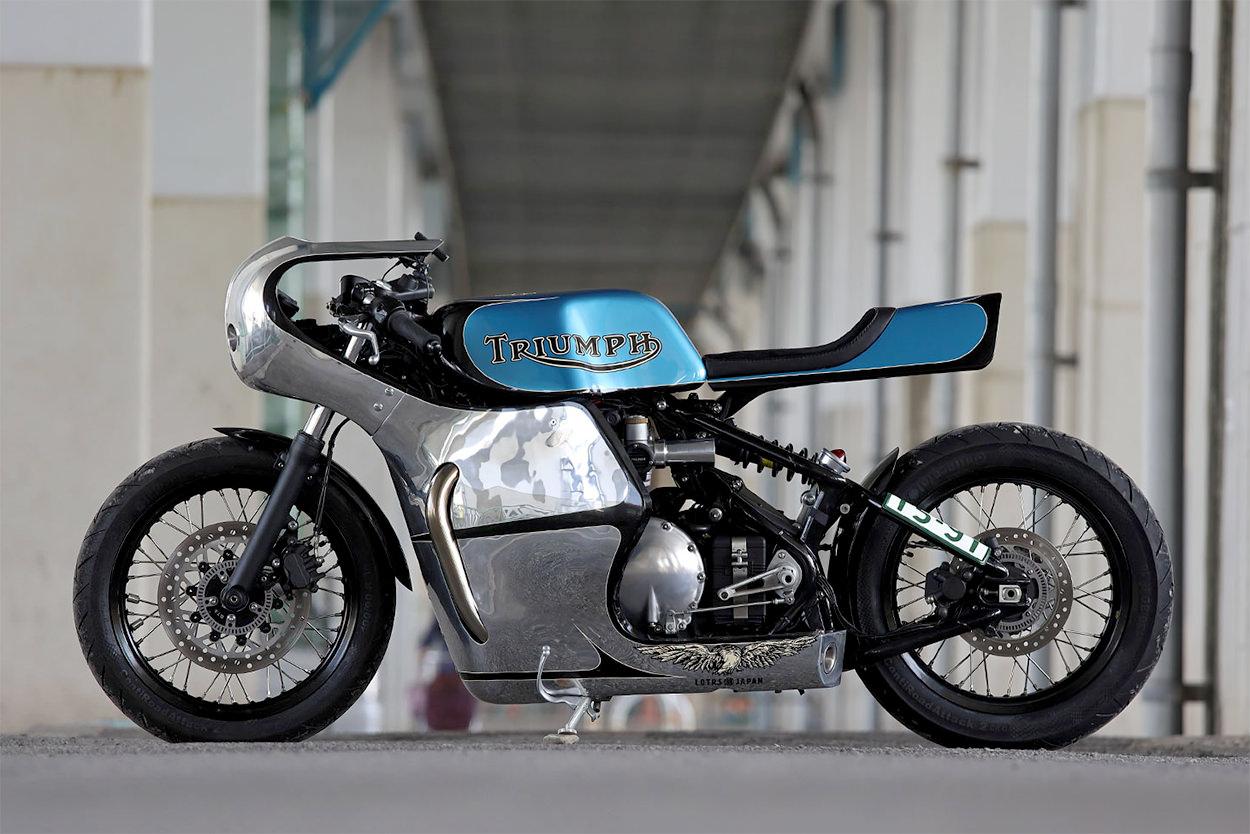 Custom Triumph Bobber by Hidemo We’ve been keeping an eye on Hideya ‘Hide’ Togashi for a decade now, ever since we spotted a Hidemo shovelhead build on display at the Mooneyes show in Japan.

Many builders have fallen by the wayside over the past ten years, but Hide Motorcycle is still going strong: if anything, the workshop’s reputation is even more burnished than before. 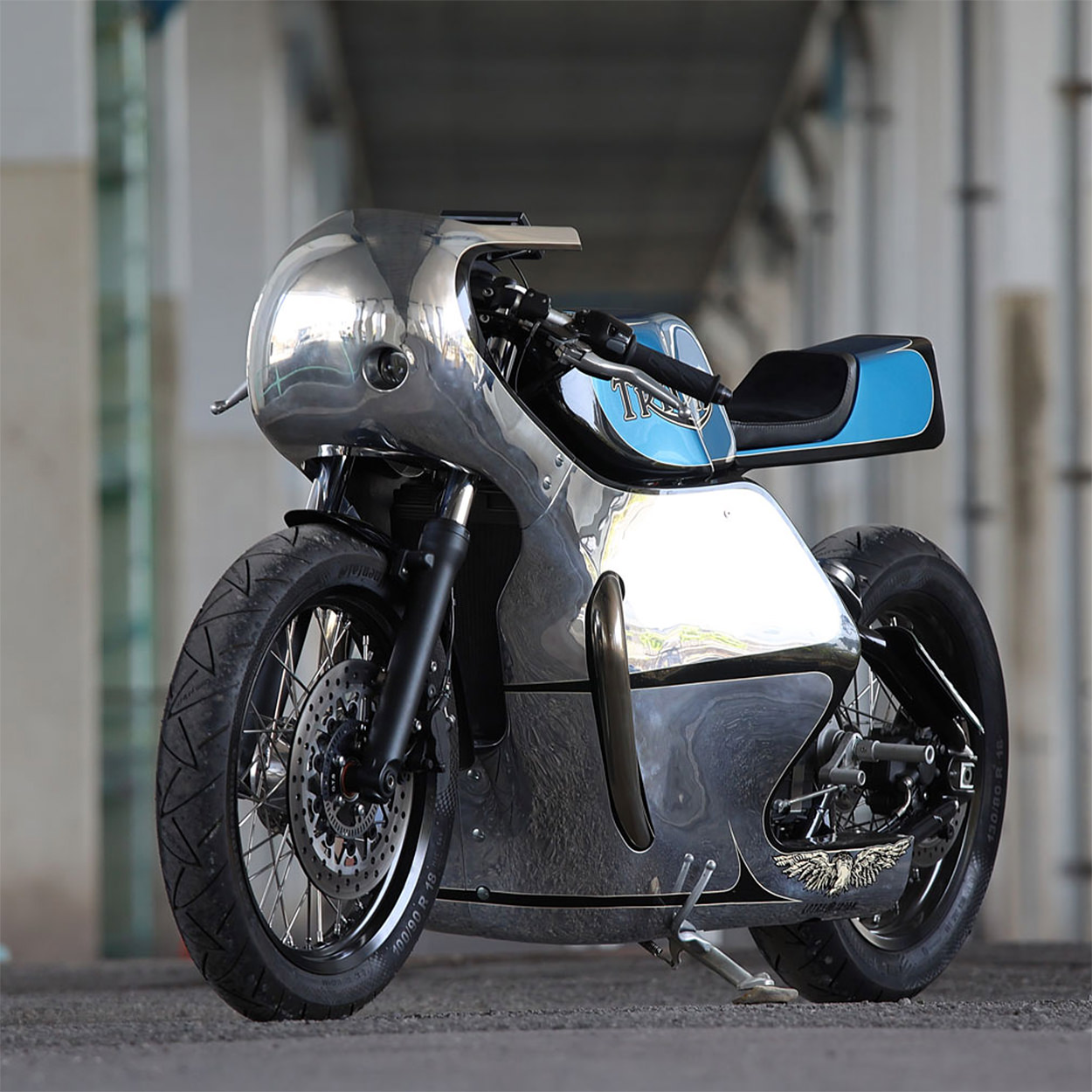 This new Triumph is called ‘Lake Placid Blue’ and it’s Hidemo’s entry into the Custom World Japan show—an event organized by Kengo Kimura of Heiwa MC and limited to just 12 of the very best bikes from local builders.

Despite being a café racer, Togashi has used a 2017 Triumph Bobber as the base. He’s hand-crafted new Dunstall-style bodywork, including an aluminum fairing, tank and seat unit—plus a custom subframe to support the back end. 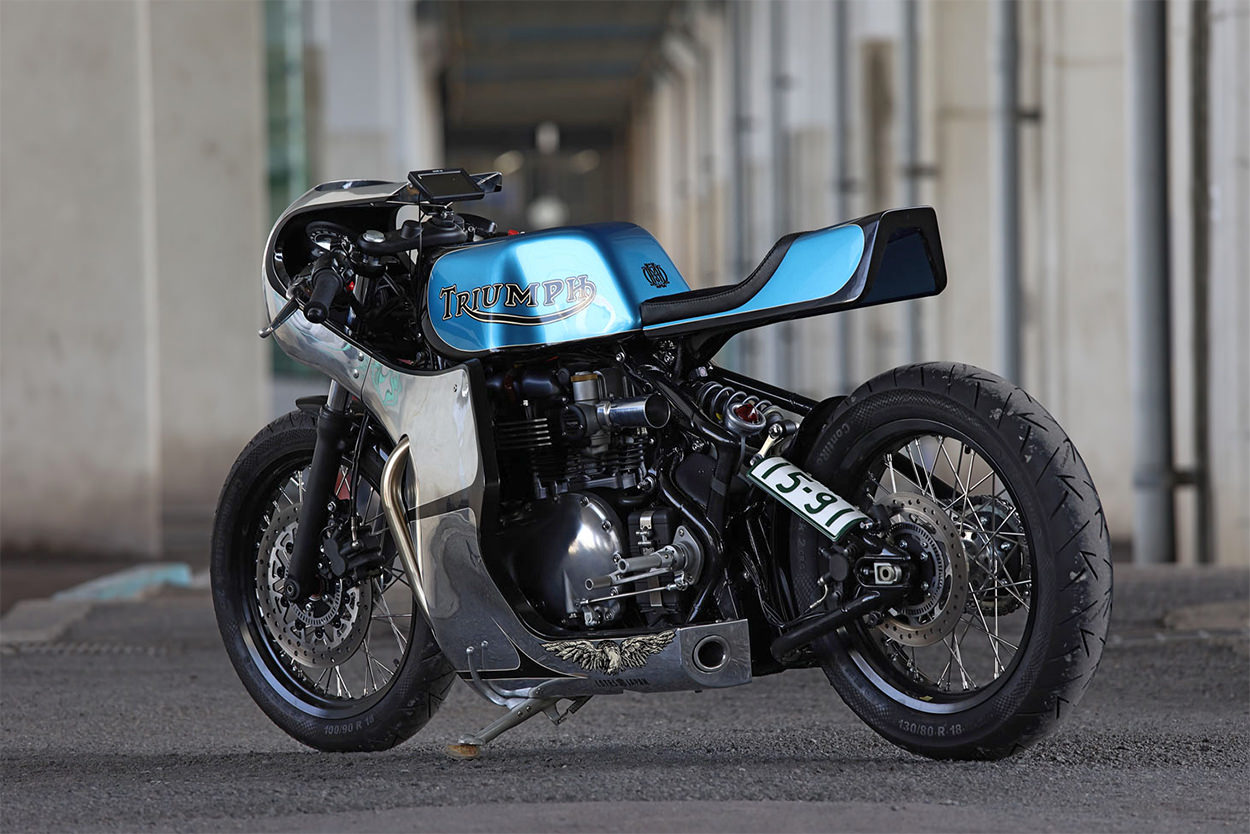 The fairing is vented to keep the engine cool, and incorporates muffler exits at the rear—an unusual approach that keeps the styling super-clean. New 18-inch Excel rims help shift the stance from bobber to café racer.

The riding position goes from laidback to sporty, with the stock hand controls now mounted onto clipon bars, and Tarozzi rearsets installed further back. The monoshock gives the rear end a modern-day ‘floating’ effect, where you’d normally expect to see a pair of shocks, but that merely adds another twist to this intriguing build. [Via] 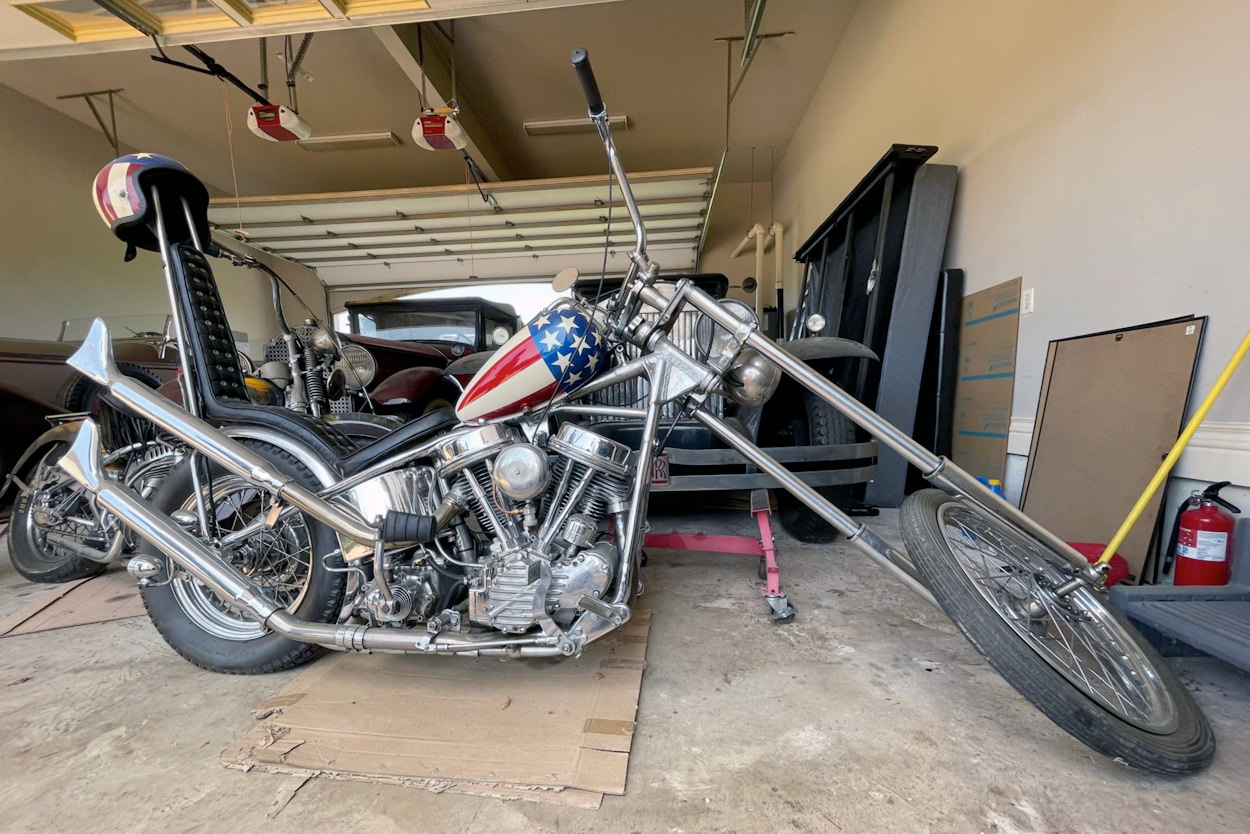 Up for auction (again): The Captain America motorcycle Every few years, there’s a buzz of interest around the ‘Captain America’ motorcycles used in the 1969 film Easy Rider. Cliff Vaughs and Ben Hardy built four custom Harley-Davidsons for the film: two Captain Americas and two ‘Billy’ bikes.

In 2014, one of the Captain America bikes was sold at auction, reportedly for $1.6m. This was supposedly the bike that was partially destroyed in the film’s crash sequence, and later rebuilt by actor Dan Haggerty for a collector. Peter Fonda apparently disputed this, according to a British financial advice website, despite being named as one of the original builders by Haggerty. 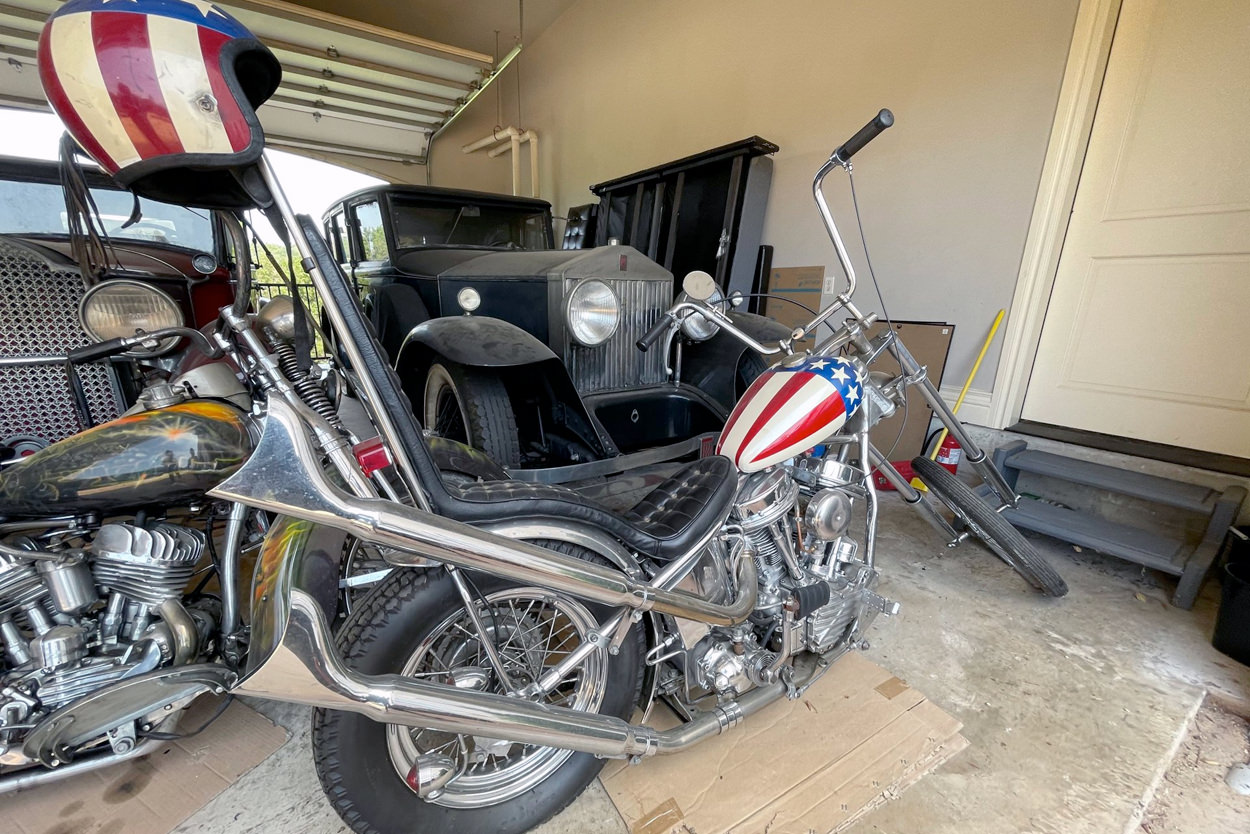 Haggerty later reportedly retracted his statements concerning the authenticity of that bike, and died five years ago. Now the ‘other’ Captain America bike has just come up for sale at Cord & Kruse … and it comes with a ‘Letter of Authencity’ [sic] from Haggerty.

We have a feeling that this one is going to run and run—unlike the bike itself, which is listed as ‘Non Operable.’ 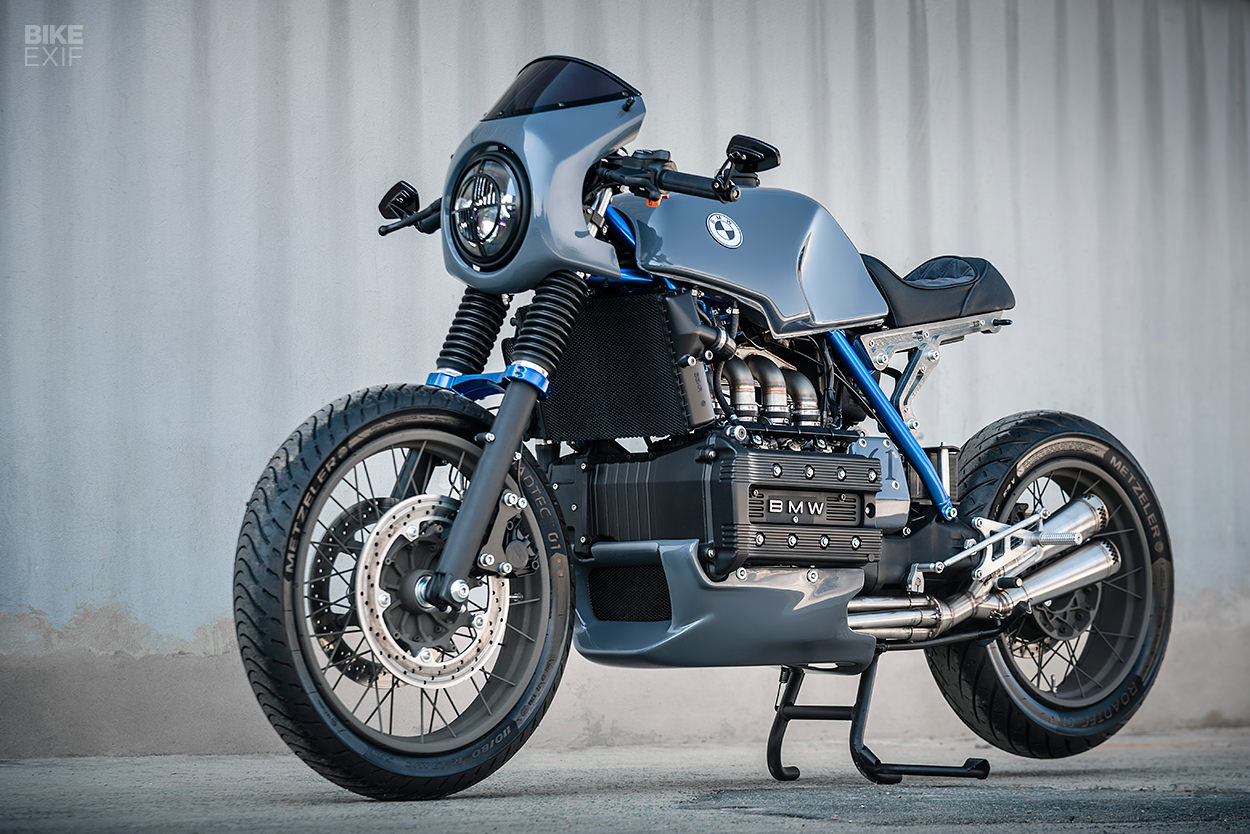 BMW K100 by Cytech South African Donovan Muller comes from a BMW family: his father ran a workshop specializing in BMWs, and Donovan has been spannering on the marque all his working life.

When he occasionally builds a custom, the experience shows. It doesn’t matter if it’s a sympathetic restomod like this R69S and Steib sidecar, or a full-blown rework such as the 1990 K100RT shown here. 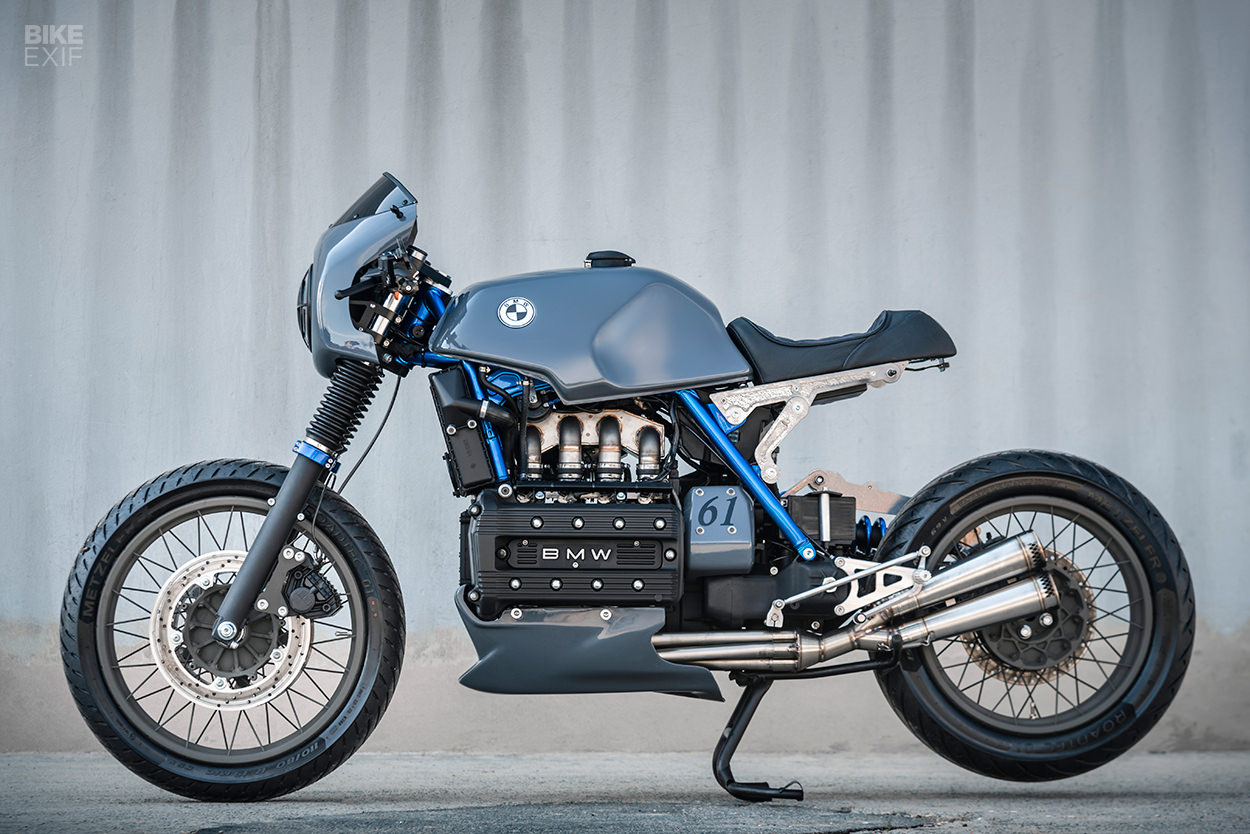 Cytech knew the K100 before buying and converting it, having carried out the maintenance for the previous owner. “He had intentions of converting it into a café racer, removed the original fairing and luggage system, and installed an aftermarket headlight and indicators,” Donovan tells us. 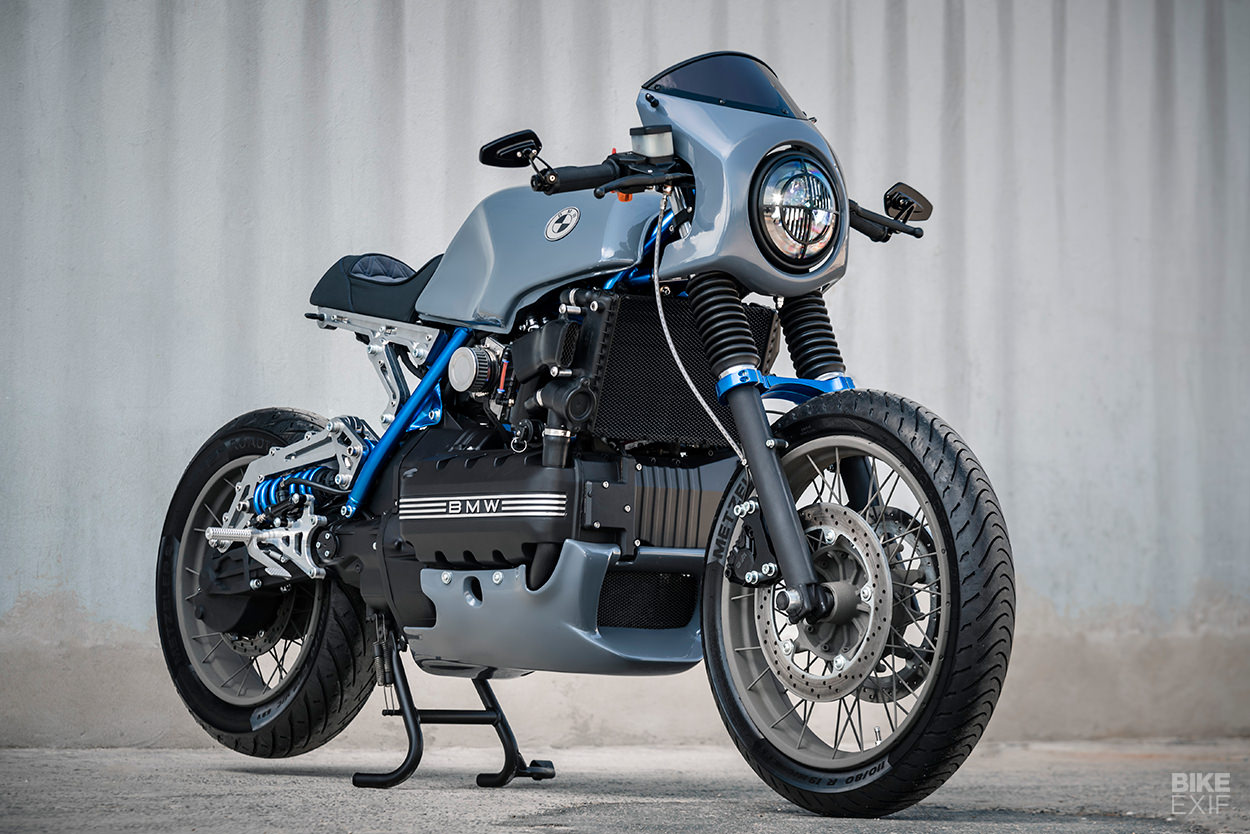 When the owner decided to sell the K100, Donovan stepped in quickly. The bike was stripped down, refurbished and upgraded with goodies like Luftmeister Performance cams, a new exhaust system from the European specialist Cafe4Racer, progressive fork springs and BMW R1100GS wheels.

Fabrication work includes a striking billet-style subframe, new top yokes and machined footrests. The stock tank required no reshaping though; it’s balanced out by a belly pan from BMW’s own catalog and a modified Puig front fairing. 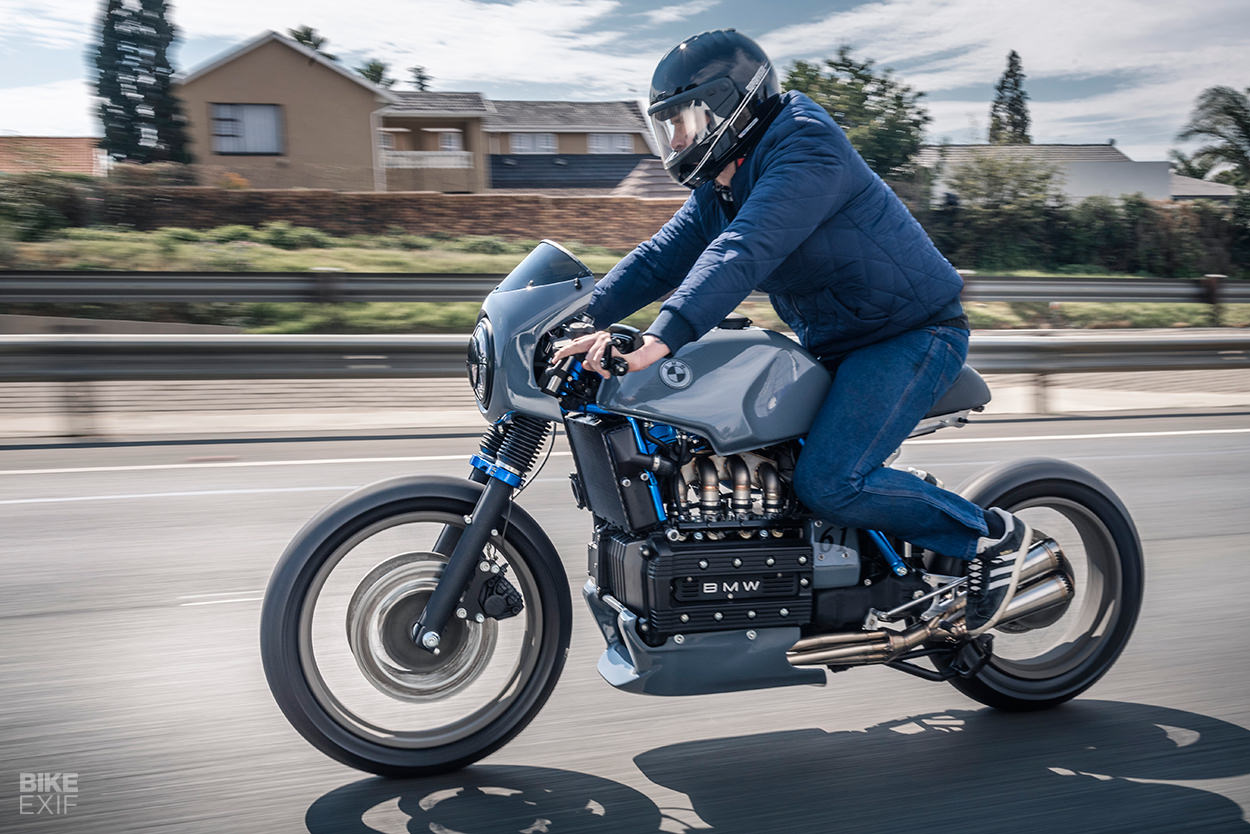 The paint is Audi’s famous Nardo Grey, with a blue metallic flake undercoat to give a hint of iridescence in the right light. Contrast comes from the candy blue metallic on the frame and the Telefix fork brace.

We’re usually a bit ‘on the fence’ with most K series customs, but this is one we’ve love to jump on and ride. [Cytech | Images by Black Rock Studio] 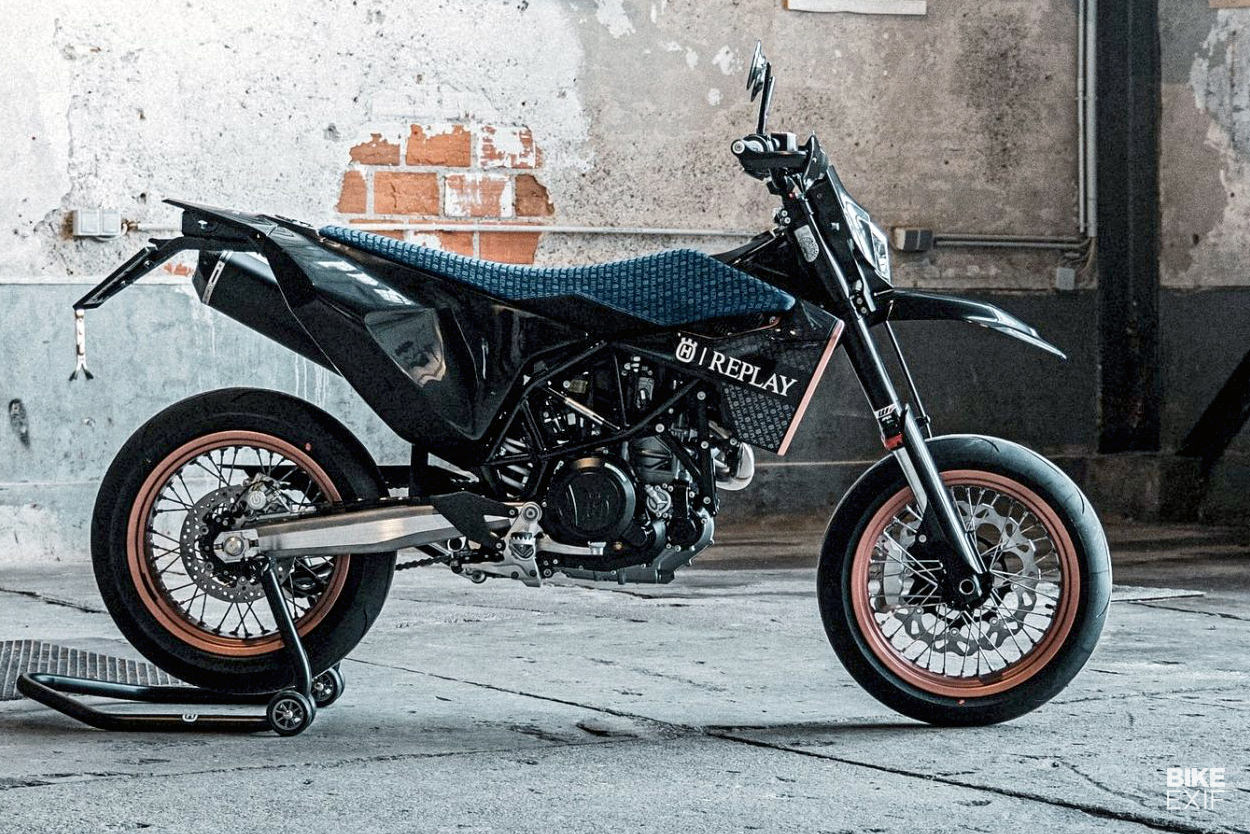 Husqvarna x Replay limited editions Limited editions don’t come much more exclusive than this. Husqvarna has created three ‘specials’ with a run of just 30 bikes, and they look rather good. It’s a partnership with the Italian denim brand Replay, which sponsors the Husqvarna Moto3 race team. 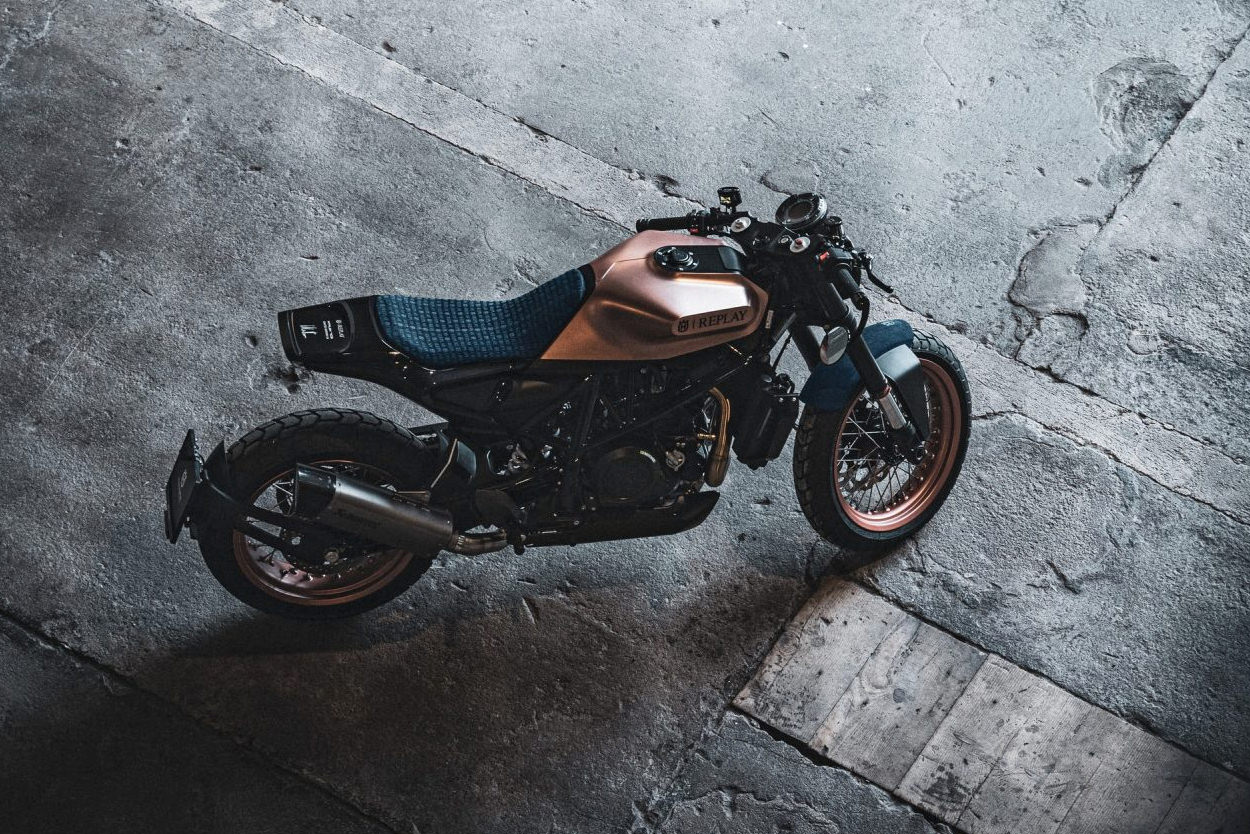 The bikes are all 701s, and covetable even in standard form: a Supermoto, an Enduro LR, and a Vitpilen. The Vitpilen café racer looks cute [above], but it’s the high-riding machines that have the strongest visual punch. The stark factory graphics are gone, replaced by intricate motifs, denim textures and fabric on the seats.

It’s the last thing you’d expect to see on a Supermoto or Enduro, but strangely enough, it works. The colors are subdued, but anyone who knows the Husky range will do a double take when they see one of these machines. 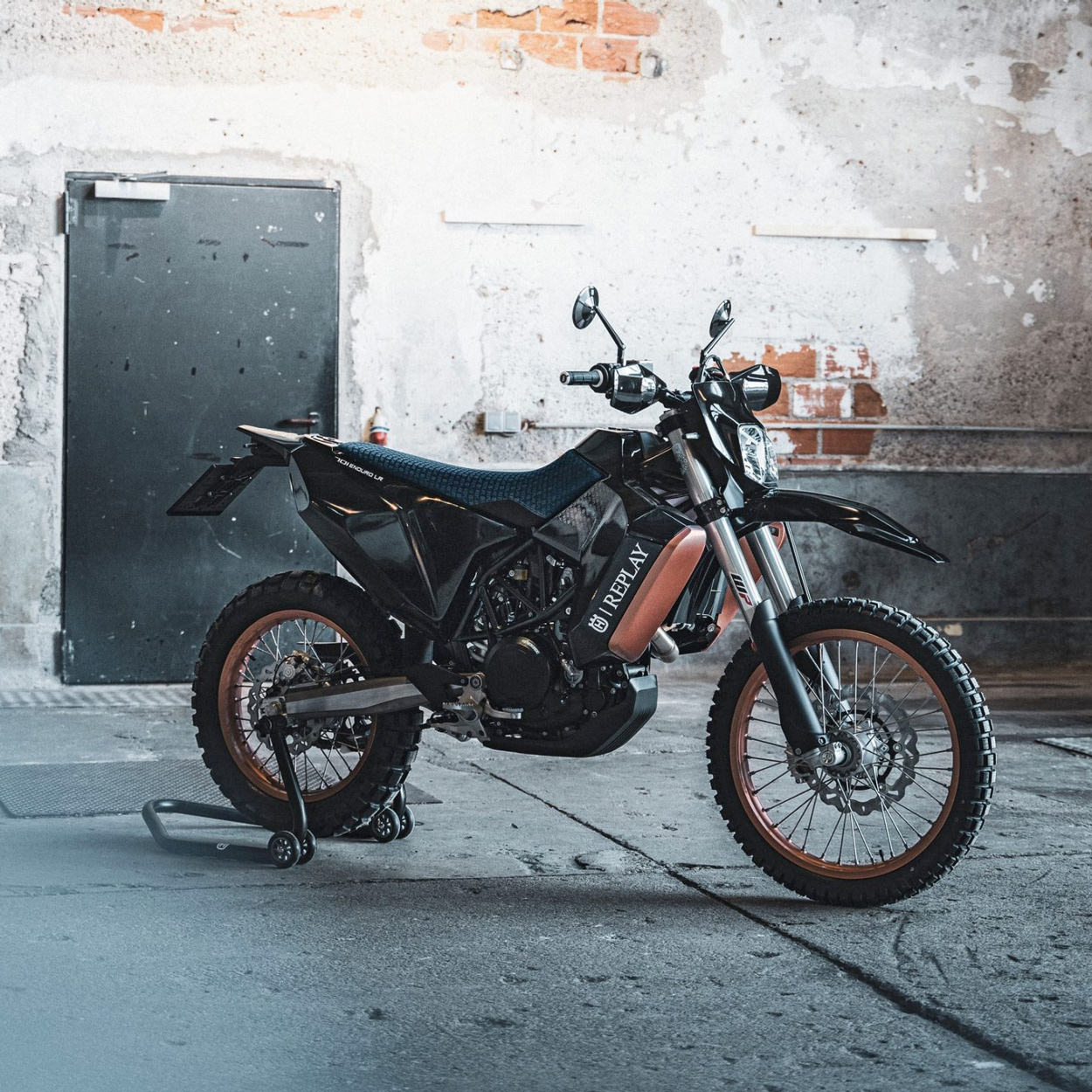 All three models are kitted out with upgrades from Husqvarna’s accessory catalogs, and offer a counterpoint to the Swedish brand’s traditionally utilitarian style. But there’s a major catch: you can’t buy one, because the bikes will “soon be handed out to selected celebrities.” 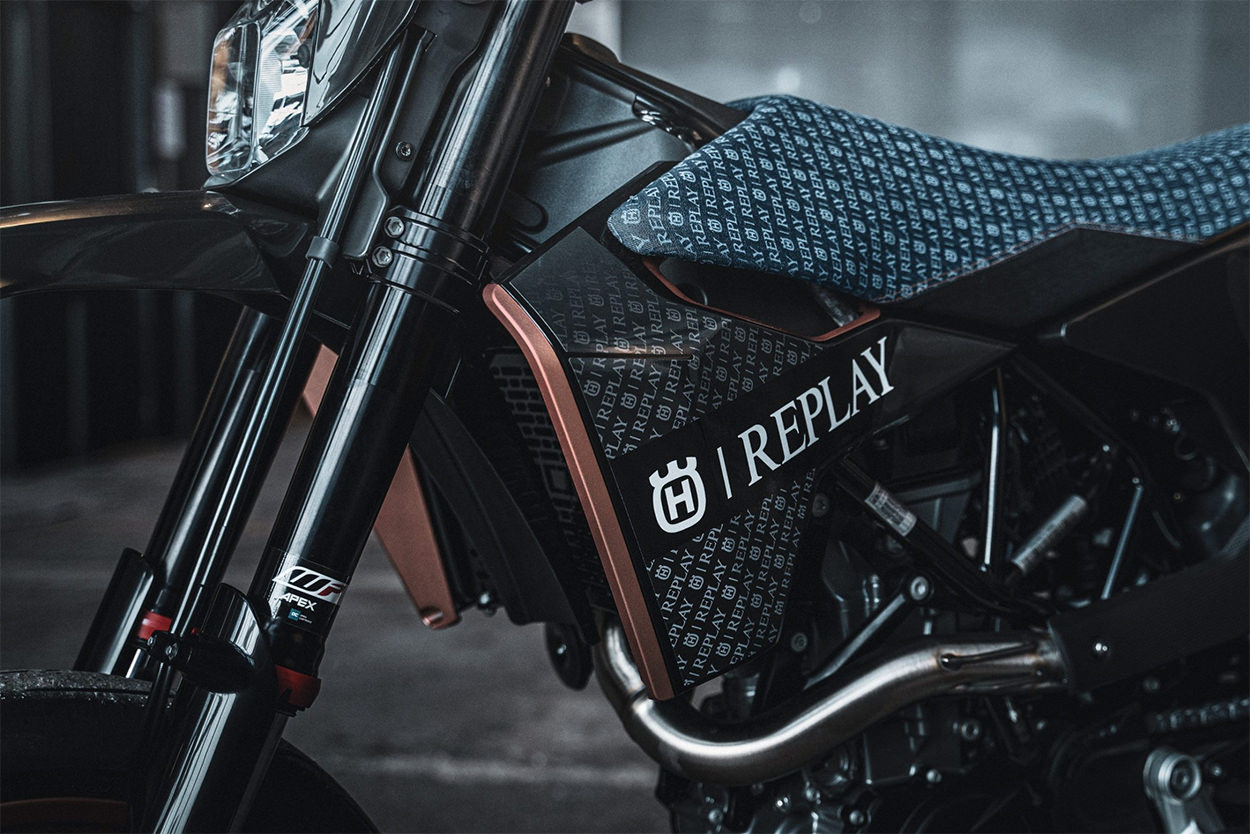 Hopefully those celebrities will be of the sporting type, and give the Replay editions a jolly good thrashing.

But we’re also told that there will soon be another run of Husqvarnas to mark the collaboration with Replay, appearing in Europe and Japan. Hopefully these will be available for regular fans of the marque, this writer included. [More]