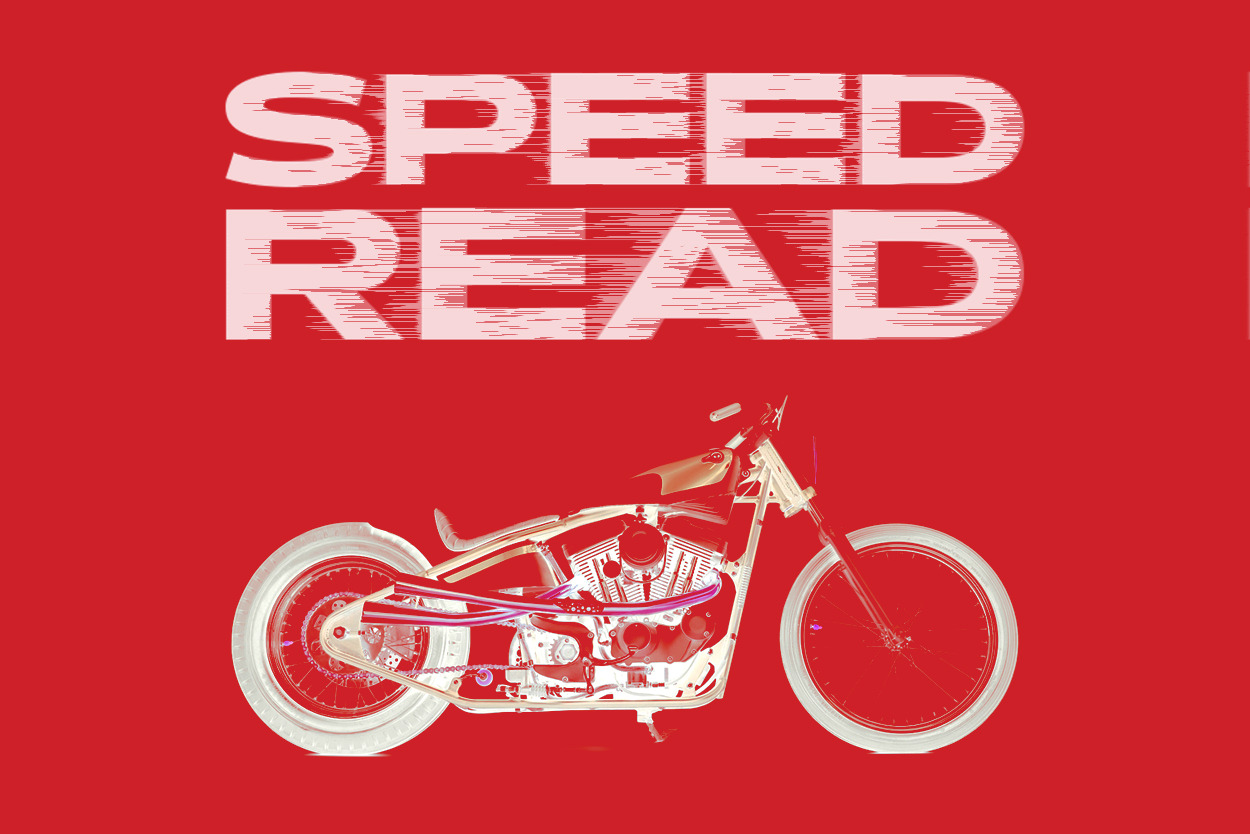 This week we’ve got a racy SuperHawk from Australia, a sleek Sportster from Jakarta, news of Go Takamine’s hookup with Indian, and a seriously weird little ATV from Russia… 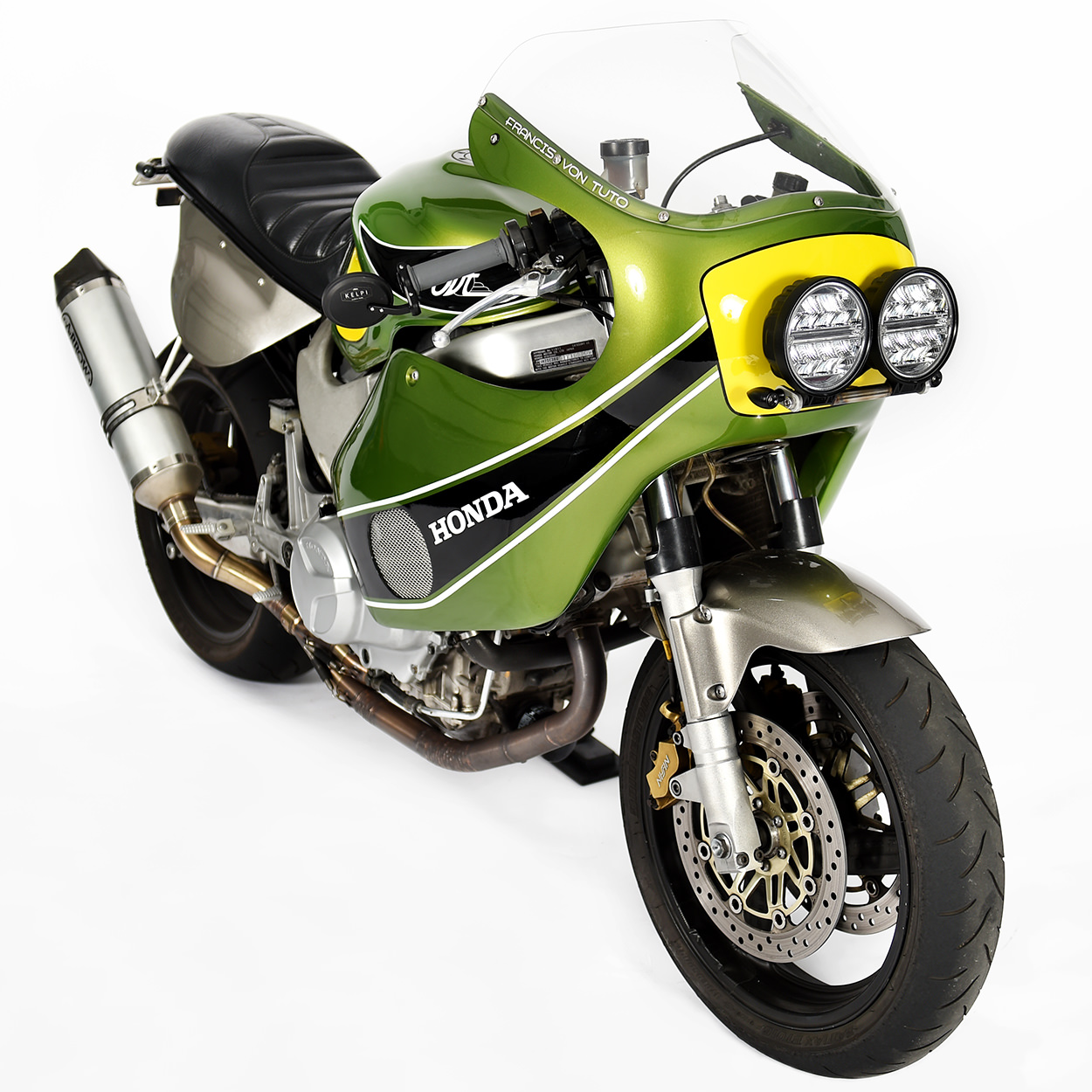 Honda VTR1000F by Francis Von Tuto Australian-based builder Francis Von Tuto is heading back to his Italian homeland. We loved his CBR600RR a couple of months ago, and he’s now signing off with this VTR1000F Firestorm sportbike—a model better known to riders in the US as the SuperHawk. It’s a 1998 spec bike, which arrived with 90,000 kilometers on the clock, and a few ‘issues.’

“They couldn’t work out why it wasn’t running properly,” says Francis. “While checking the valve clearances, I realized that the timing was absolutely off. The engine was firing at 90 degrees rather than 270!” 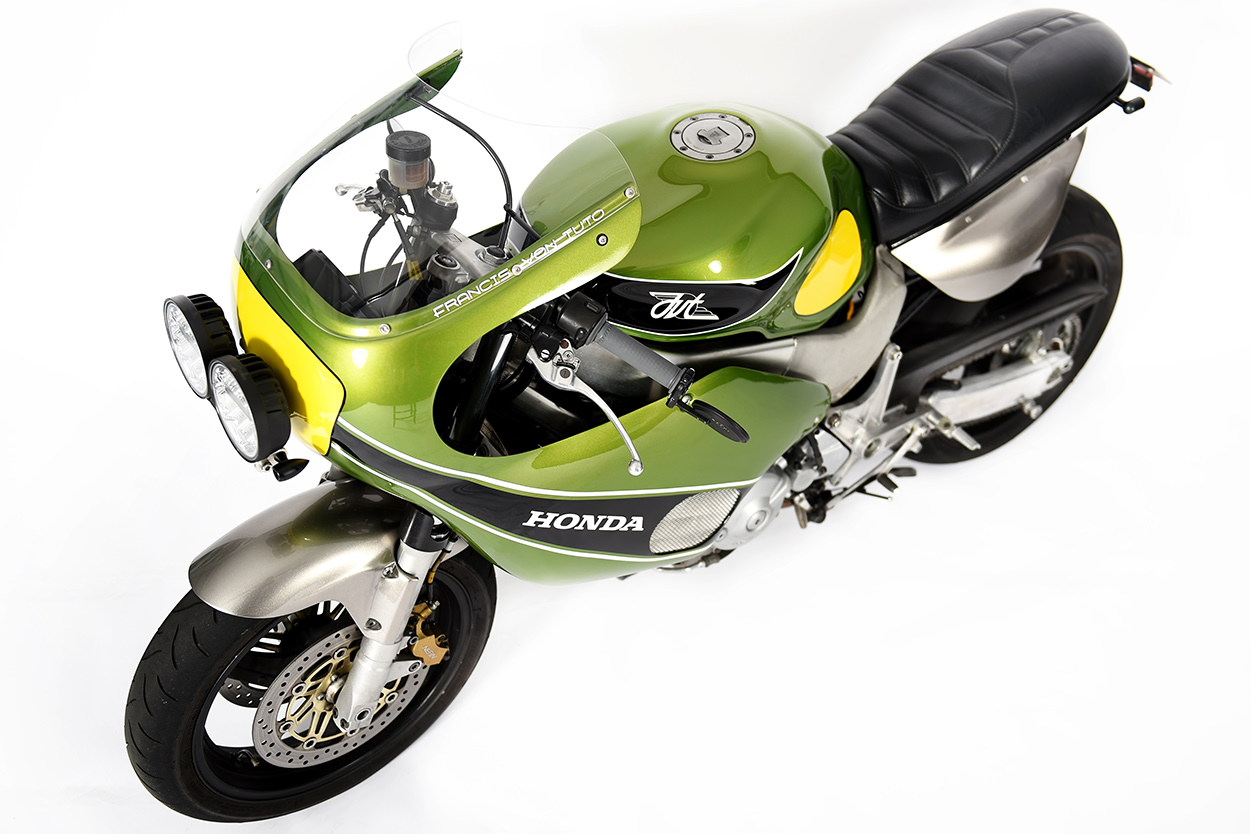 Given that the VTR1000F has a bulletproof V-twin pumping out around 100 hp, plus decent wheels and suspension, it’s an excellent donor for a modern, racy custom.

But the prominent side radiators bugged him, so he shaped up foam and fiberglass to create a one-piece solution. Local specialist Paul Borowinski then built a full mold and produced the finished bodywork, with oblong holes near the radiators helping with air extraction. 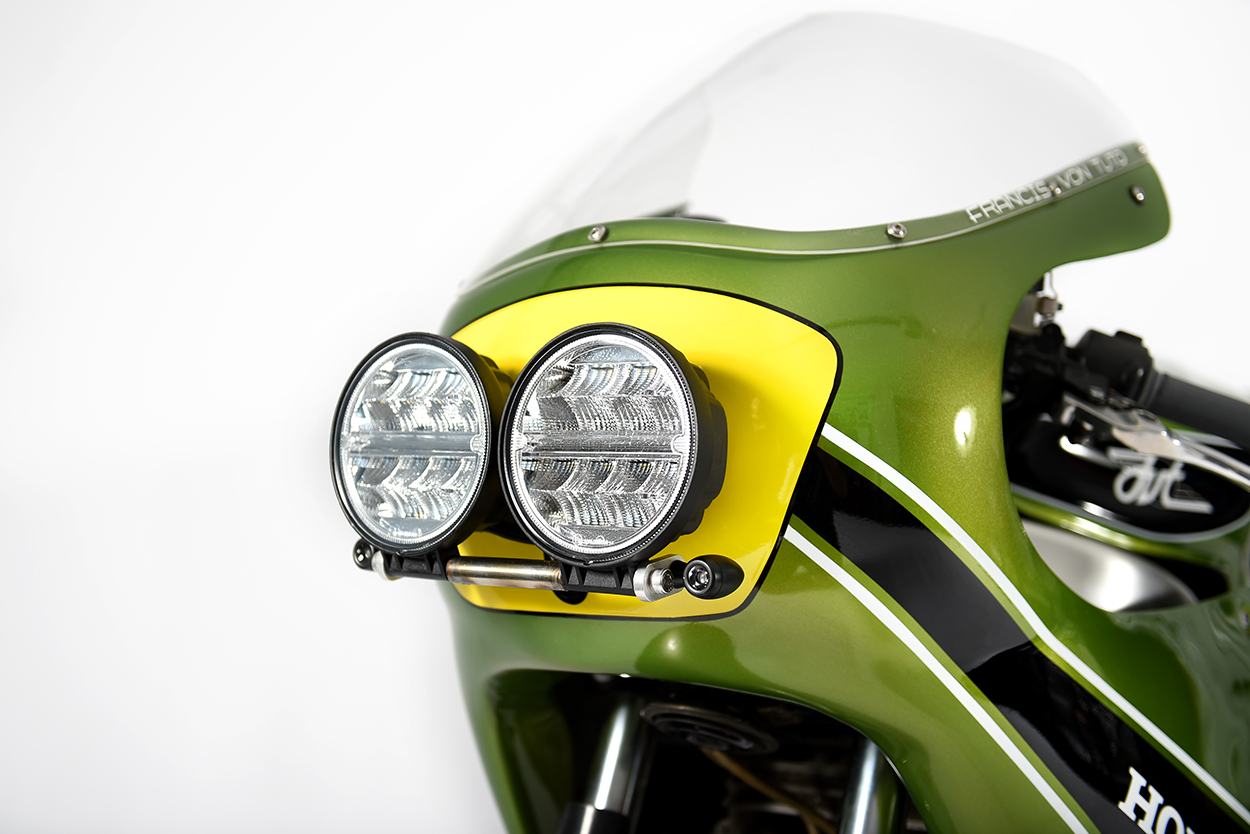 The dual headlights are attached to an easily removable lightbar unit that also holds tiny indicators. The original instruments bolt onto the mount for the lightbar.

For better lines, Francis has shortened the front fender and installed a custom made seat with comfortable dual density foam. Underneath, the electronics and the main wiring loom are secured to an aluminum tray and the battery is cradled in a steel cage. The sides are covered by hand-shaped 2mm aluminum plates, which contrast with the new green paint—a close match to the CB500 Four ‘Candy Jade Green.’ 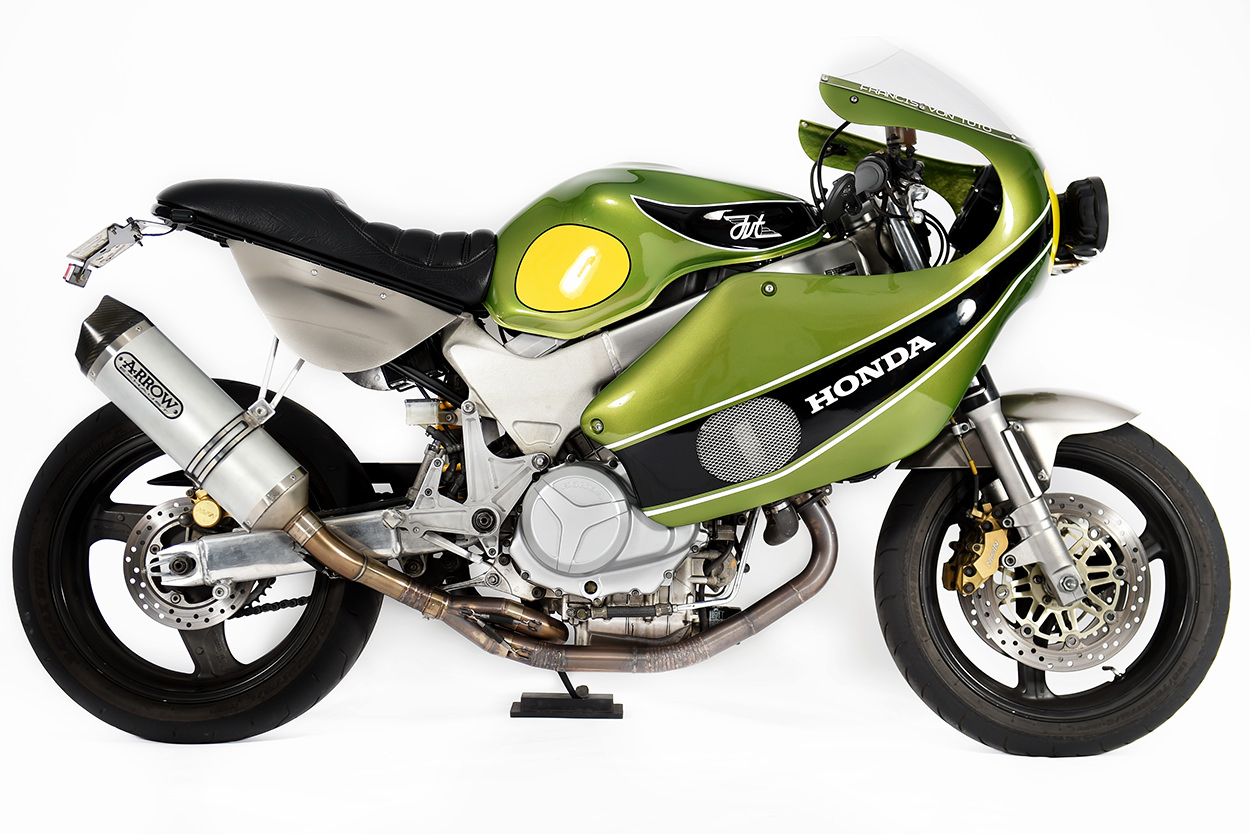 With a fresh Barnett clutch kit installed, vapor-blasted cases and a handmade 2-into-1 exhaust system with an Arrow muffler, this VTR is ready to hit the twisties. Tempted? $10,000 and it’s yours, with pickup in Brisbane. [More] 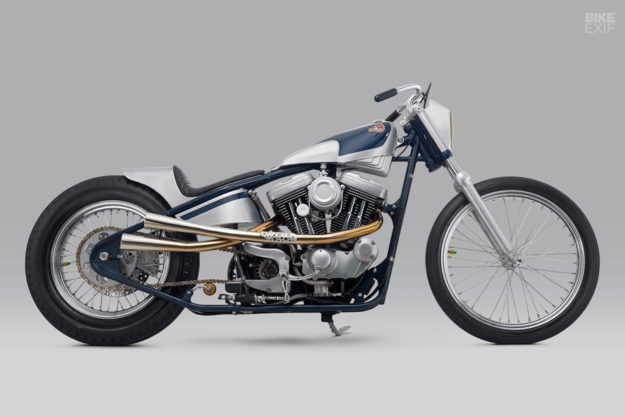 For sale: Thrive’s ‘Kuzuri’ Sportster One of the best ever Sportster customs we’ve featured on EXIF has just popped up for sale. It was built by Jakarata-based Thrive Motorcycle four years ago, and still looks as fresh as a cucumber. 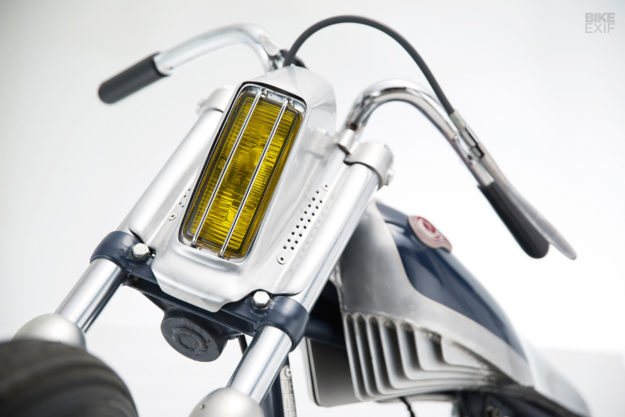 Builders Indra Pratama and Barata Dwiputra have long been at the forefront of the Indonesian scene and are now fixtures on the global stage. ‘Kuzuri’ is one of their finest works, and is based on an Evo motor lifted from a 2000-spec Harley XL1200.

The frame was built by Brodonolo Custom Garage of Central Java, and the sleek sheet metal is 100% custom. 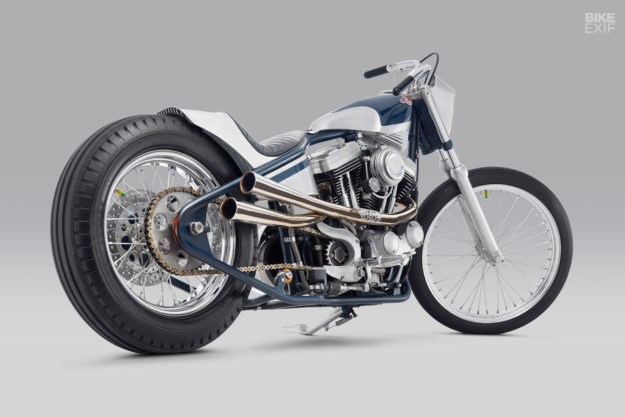 The design is timless and the workmanship top-notch, from the elegant paint to the vapor-blasted engine. If you’re partial to custom Harleys with a hint of Japanese chopper styling, drop Thrive a line. 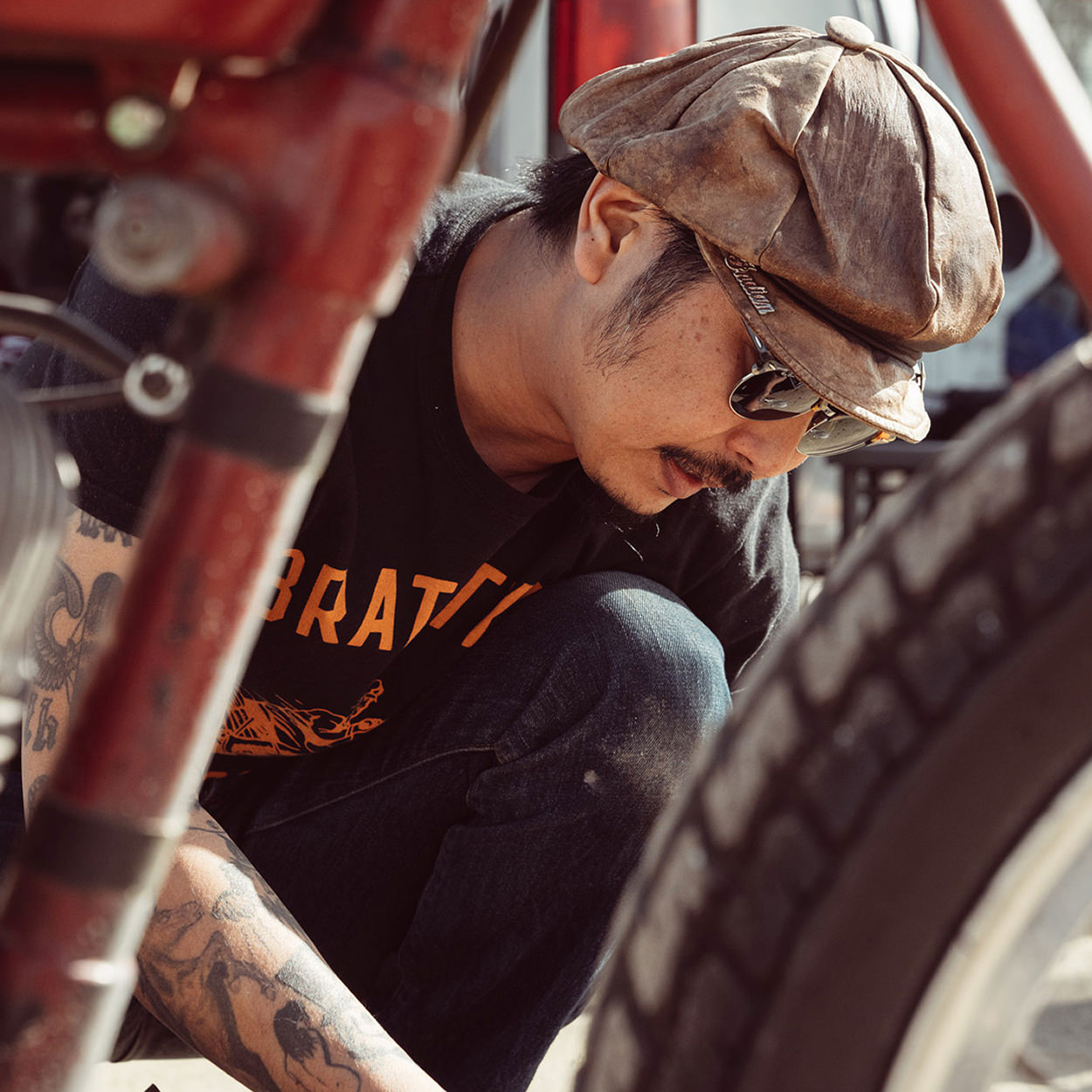 Incoming: An Indian Chief from Go Takamine Amidst the barrage of daily press releases we receive, one stood out this week: Indian Motorcycle has hired Go Takamine, the creator of BratStyle, to customize the recently unveiled 2022 Chief. 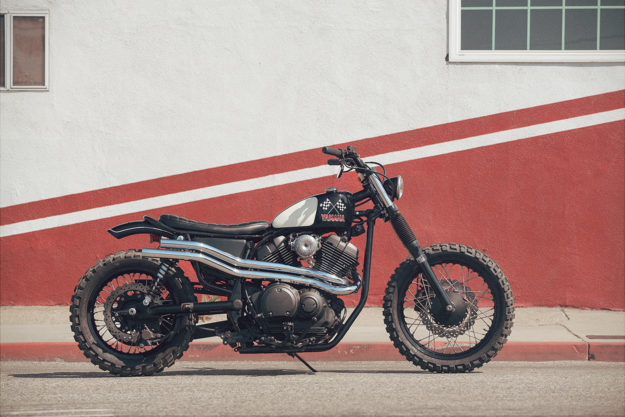 As well as being one of the defining icons of Japanese custom culture, Takamine has history with OEM projects. He delivered a brilliant SCR950 for Yamaha [above], and turned up with the goods for BMW when they commissioned an R nineT [below]. 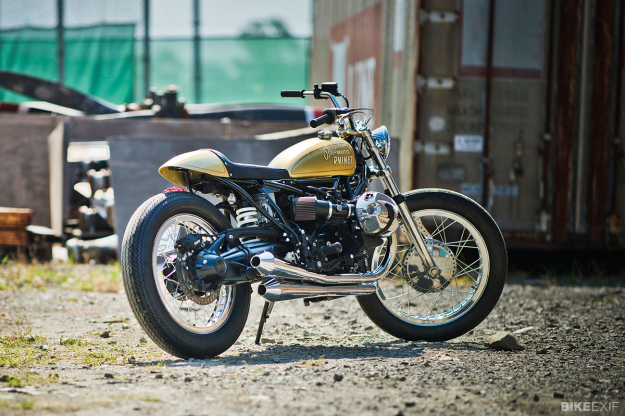 Ola Stenegärd, Indian’s current Director of Design, is is ex-BMW and knows Takamine well. We also detect Stenegärd’s hand in making the new Chief smaller and lighter than the outgoing model, so it’s now a closer competitor to the Harley Softail. The Chief comes with a new steel (rather than aluminum) frame, which will make life easier for Takamine when he whips out the grinder. 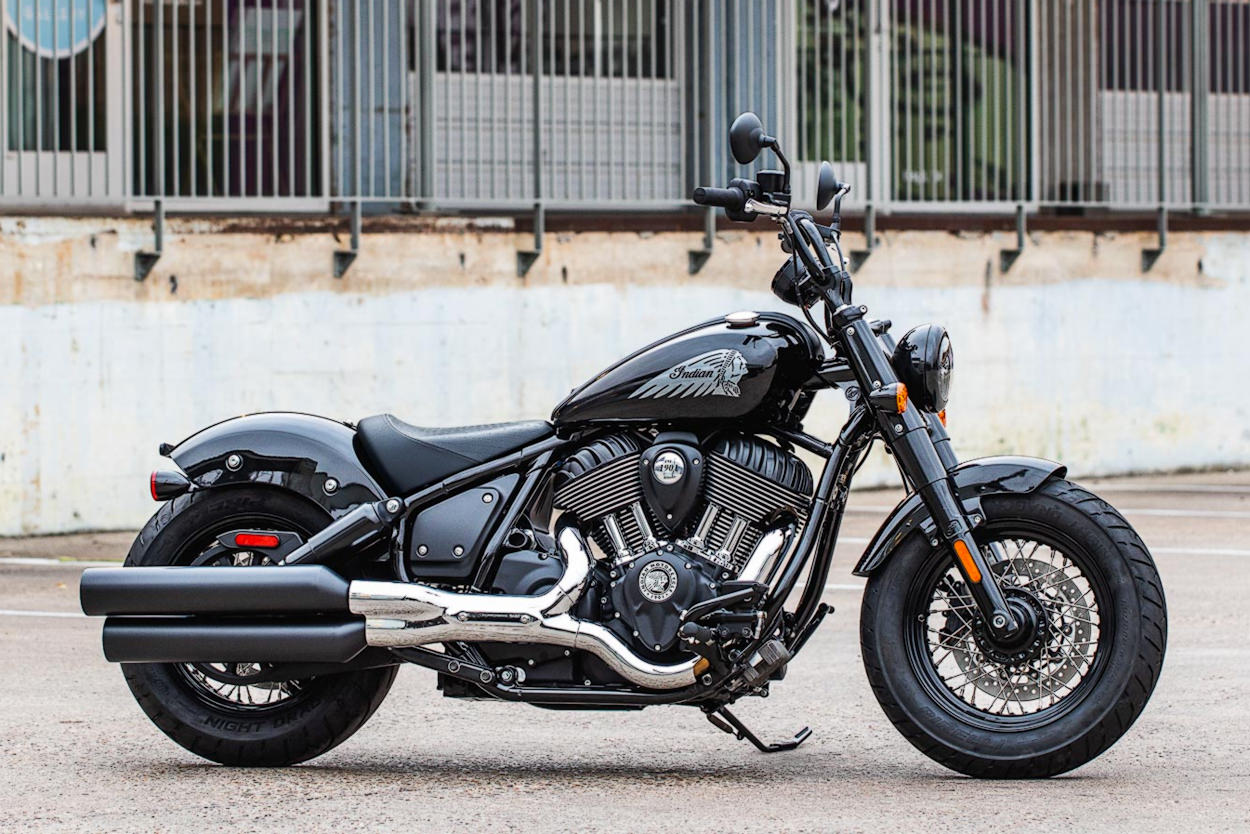 Takamine is no stranger to Indians, and has worked on many examples in the past. “The new Chief is ideal for customization, with its classic steel tube frame and air-cooled motor,” he notes. “I’m excited by the possibilities.”

We’re curious to see what he comes up with too. Also on board to deliver Chief customs soon are US-based Paul Cox and Keinosuke “Keino” Sasaki, working as a duo, plus Carey Hart, an offroad truck racer and former freestyle motocrosser. 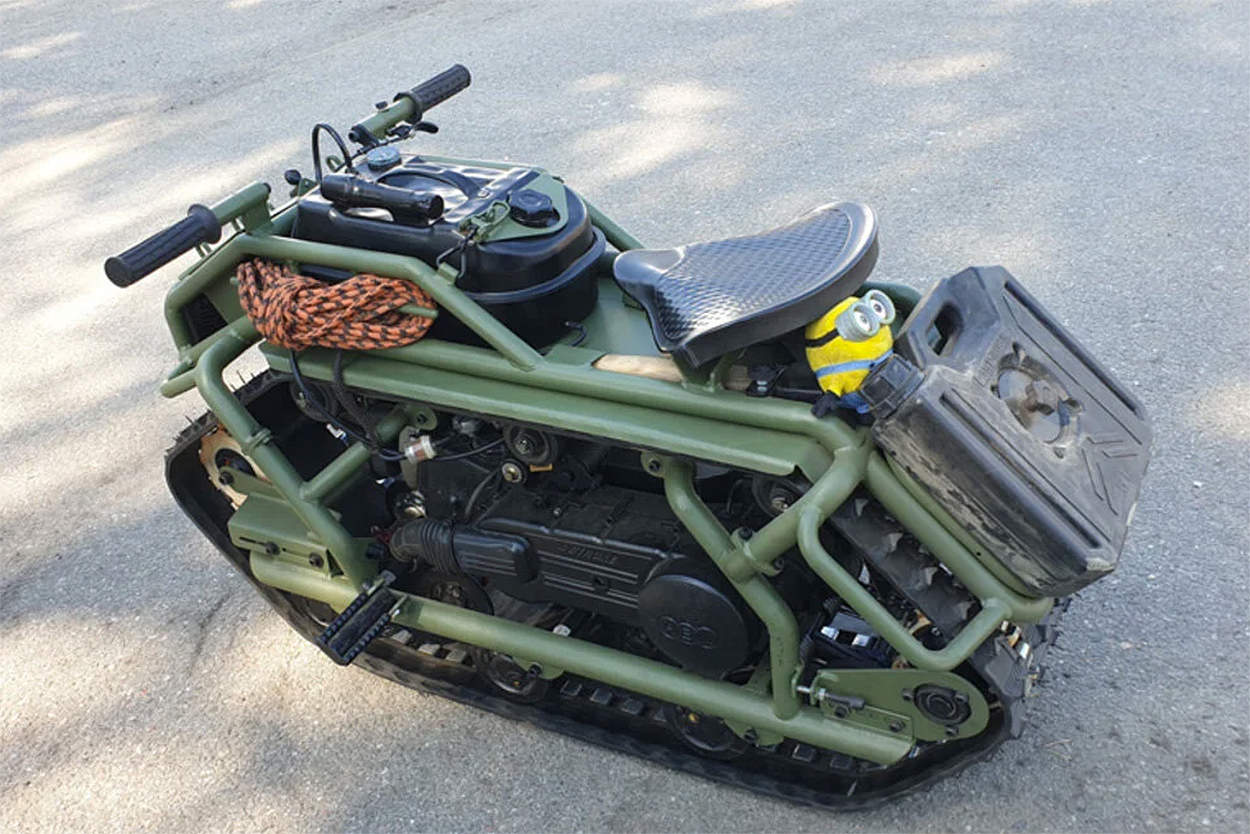 Hamyak ATV by Eduard Luzyanin Okay, it’s not strictly a motorcycle. But it’s equipped with a 150cc Chinese motorcycle engine and damn, we need one of these in the EXIF garage.

The Russian Hamyak ATV is small enough to fit inside the trunk of virtually any car, like the famed Honda Motocompo folding scooter of the early 80s. It can reach 40 kph (27 mph), weighs just 85 kilos (187 lbs), and technically it’s a snowmobile, given the track it runs on. But it can tackle any terrain—subject to rider bravery, or foolishness. 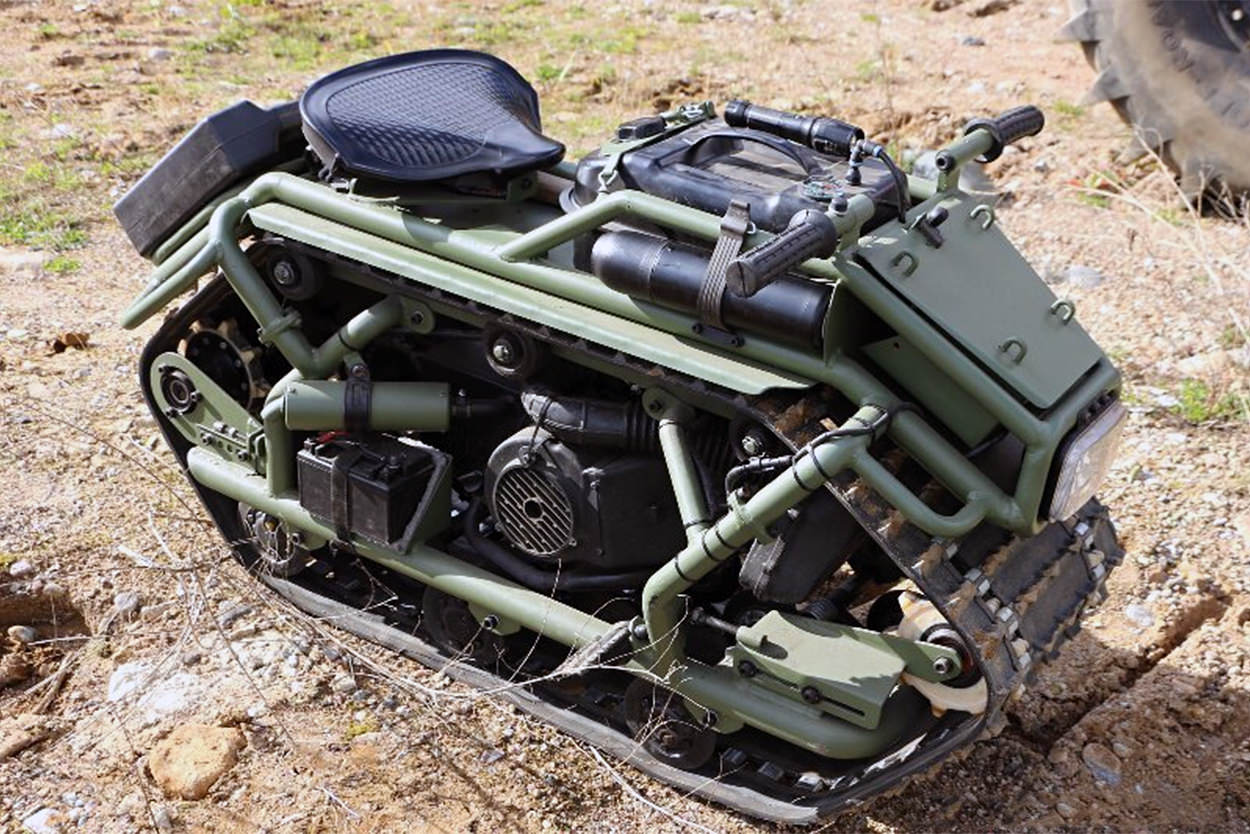 Hamyak means hamster in Russian, and Luzyanin gave the name to his fantastic design because it’s small and extremely mobile. If you can’t turn it fast enough by shifting your bodyweight, or you’re on hard ground, you simply jump off and give it a twirl to change direction. 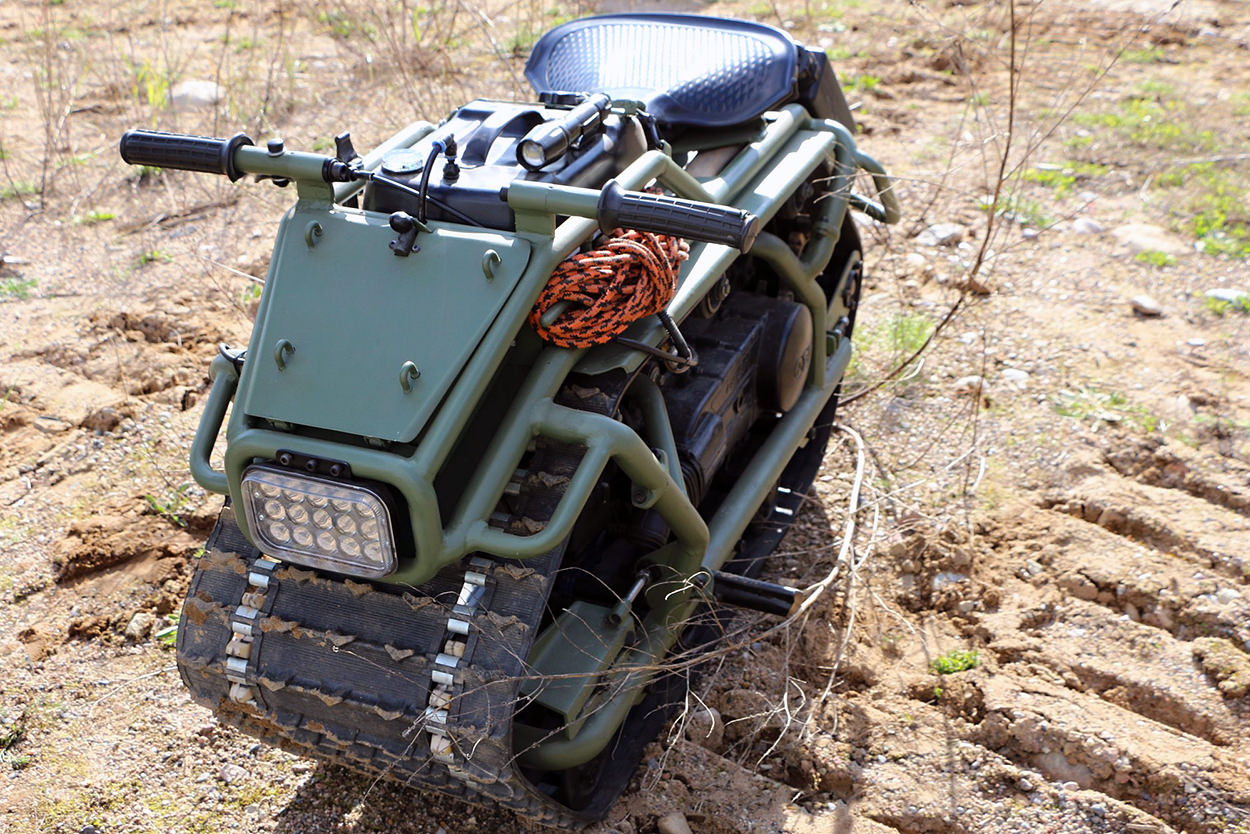 Storage compartments hold a collection of survival tools such as a small hatchet, a compact saw, a torch, and a thermos flask. A 15-meter (49 feet) rope is attached to the side, and there’s a five-liter auxillary gas can at the back. The main tank holds ten liters and the motor burns through about a liter an hour. 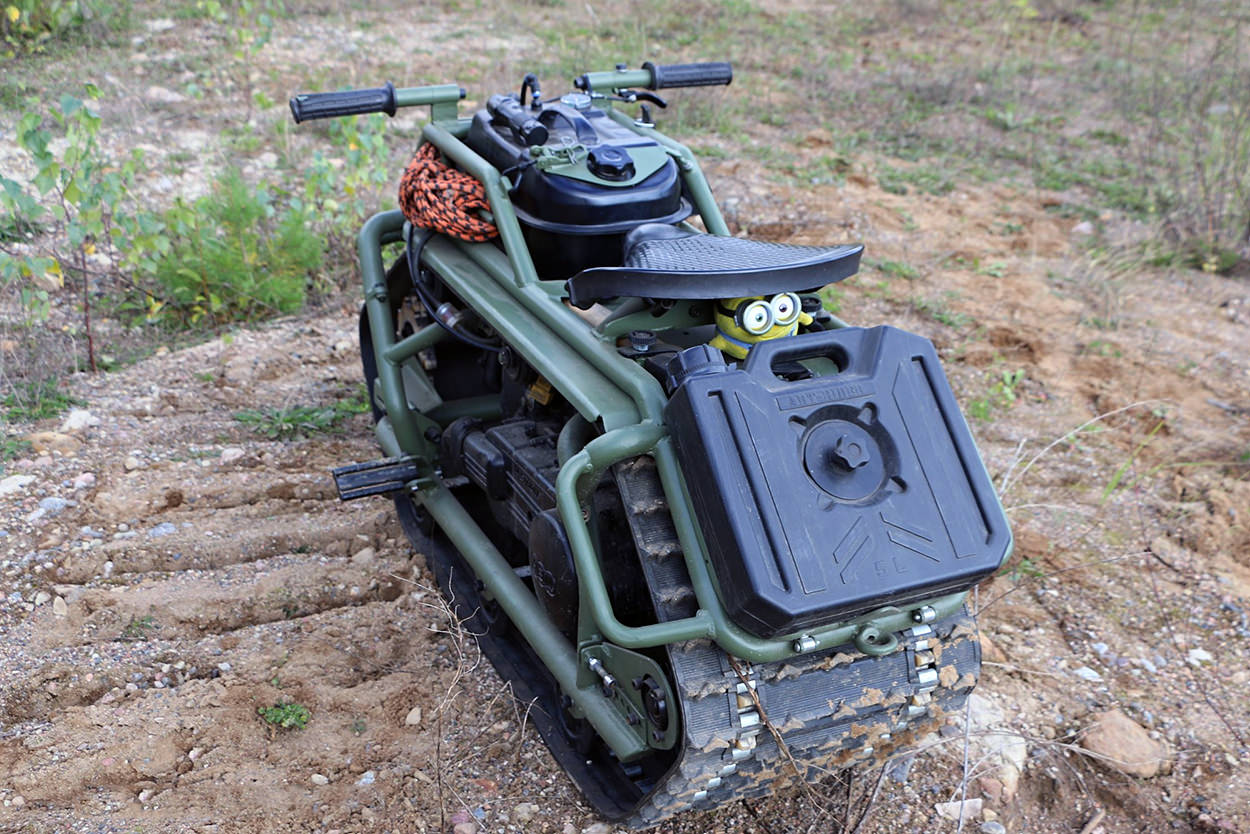 With no suspension to speak of—aside from the tiny shock absorbers in the monotrack—the hamster is likely to be an entertaining ride over rough terrain. That doesn’t diminish our enthusiasm for this vehicle in any way. Za Zdarovje! [Via, in Russian]