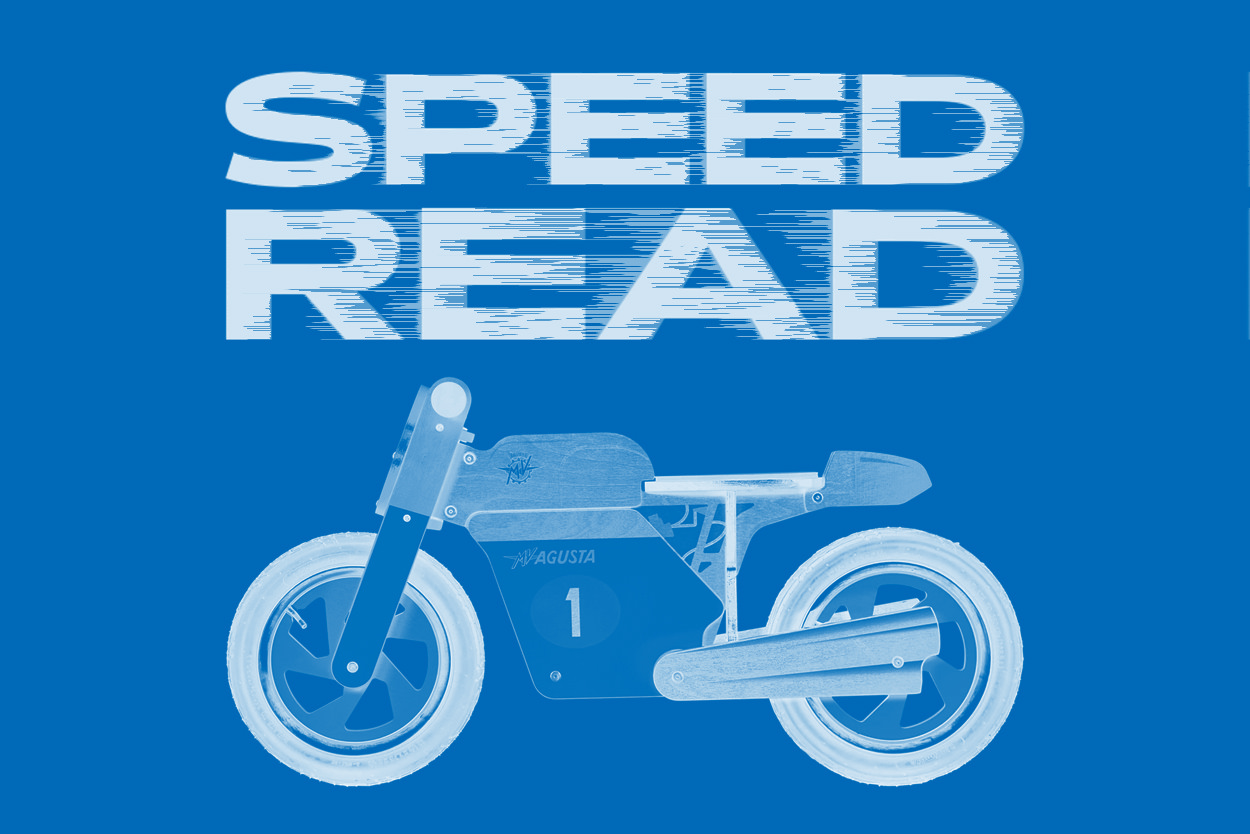 The stories that caught our eye this week, including Gene Romero’s Triumph racer being sold, an MV Agusta that an 18-month-old can ride, and a cut-price AC Sanctuary Z2. Plus detailed plans on how to build a 150 kph electric bike for about five large.

Sold: Gene Romero’s 1968 Triumph T120R Bikes with a history don’t come much better than this: a genuine T120R factory racer converted to a street tracker by Gene Romero, who in 1970 famously became the youngest person to win the AMA Grand National Championship. 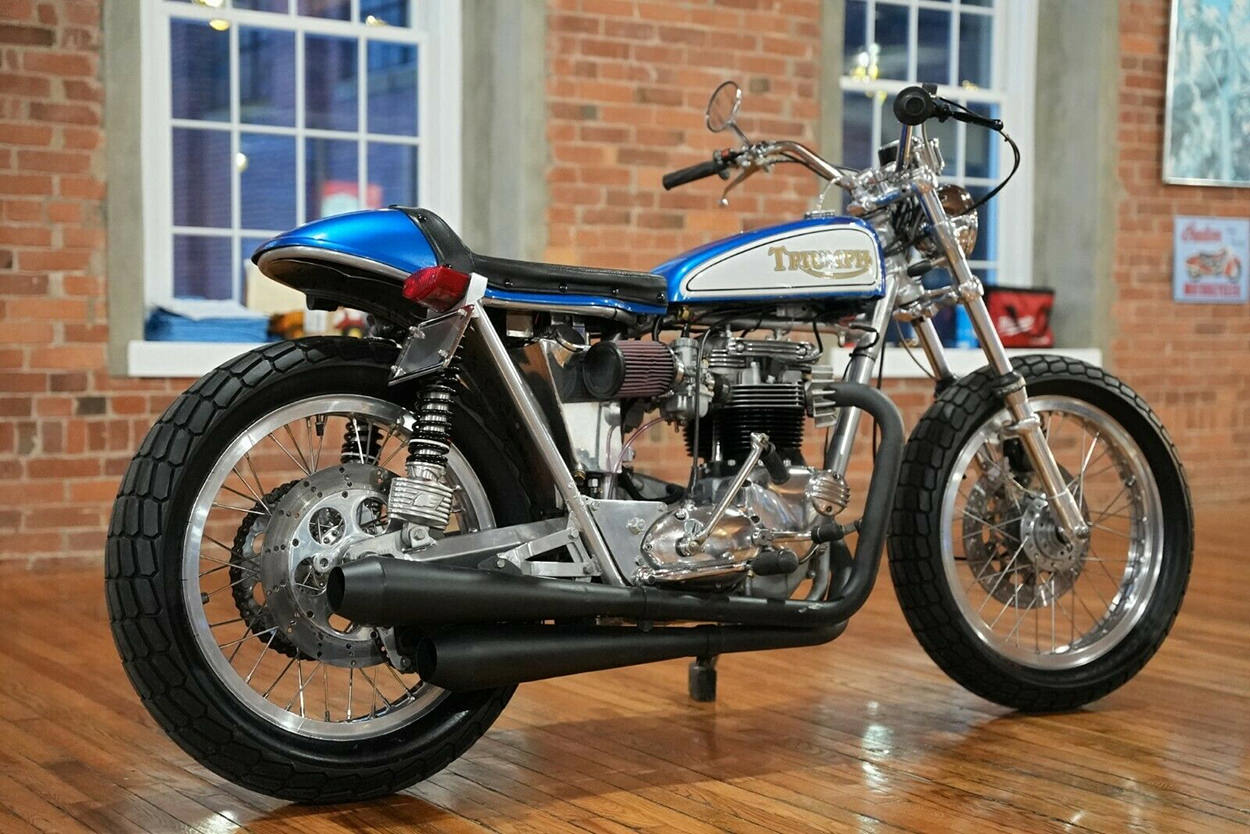 The Triumph sold a few days ago on eBay for $26,500, which sounds like a bargain to us. It’s a street legal, matching numbers machine, and was sold by Ken Kaplan of the New England Motorcycle Museum. It was one of Ken’s most prized possessions, but the museum desperately needs a new roof — so the bike had to go, to help raise funds. 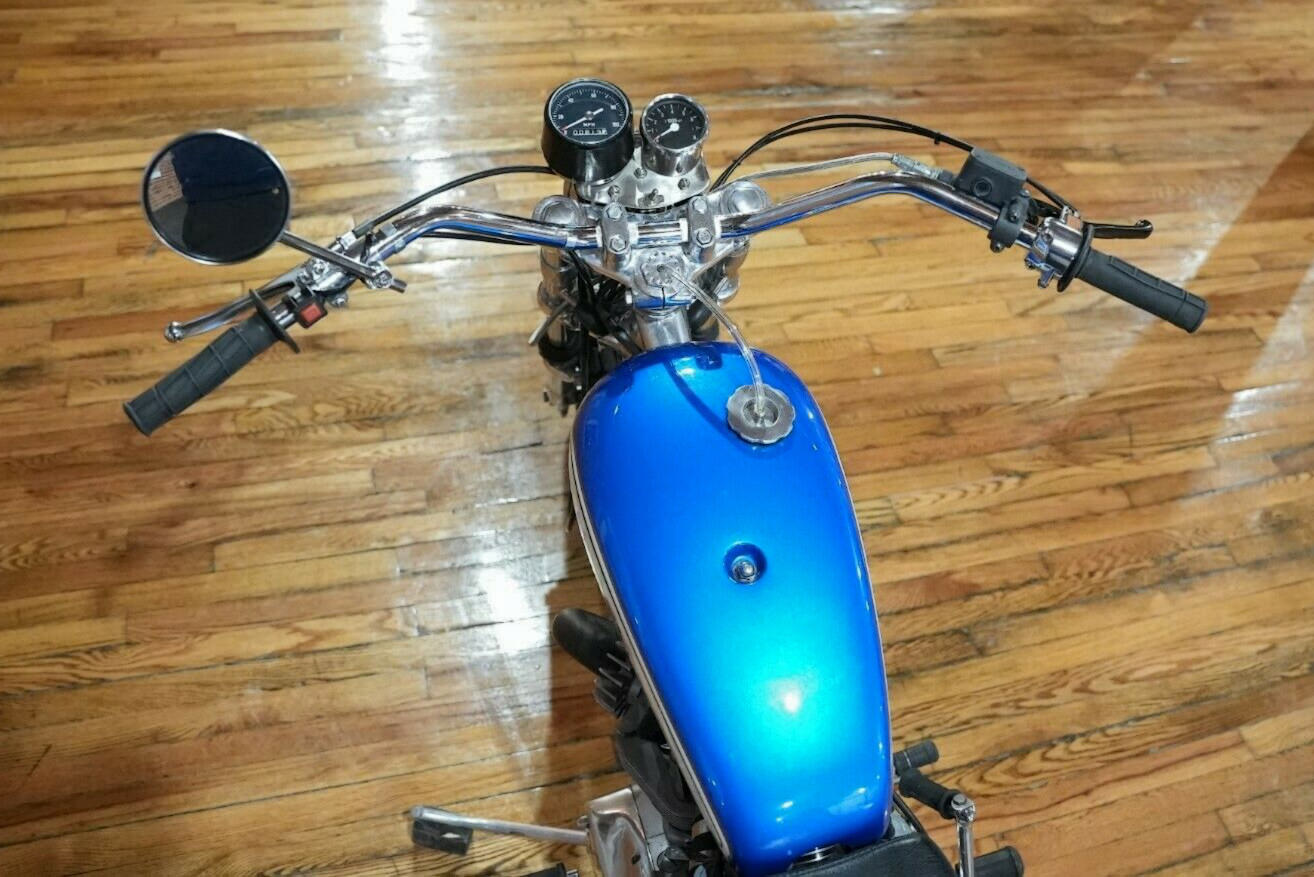 The conversion was completed around 20 years ago, and the bike has done fewer than 500 miles since. It keeps all the flat track niceties such as a right-side exhaust system and Dunlop K180 rubber, but adds brakes, lighting and instrumentation for road use. The balanced and tuned engine has a 750cc big bore kit, and we’re told it “sounds fantastic.”

Here’s hoping this beautiful machine will get some use in the future, and won’t be hidden away in a private collection. [Via] 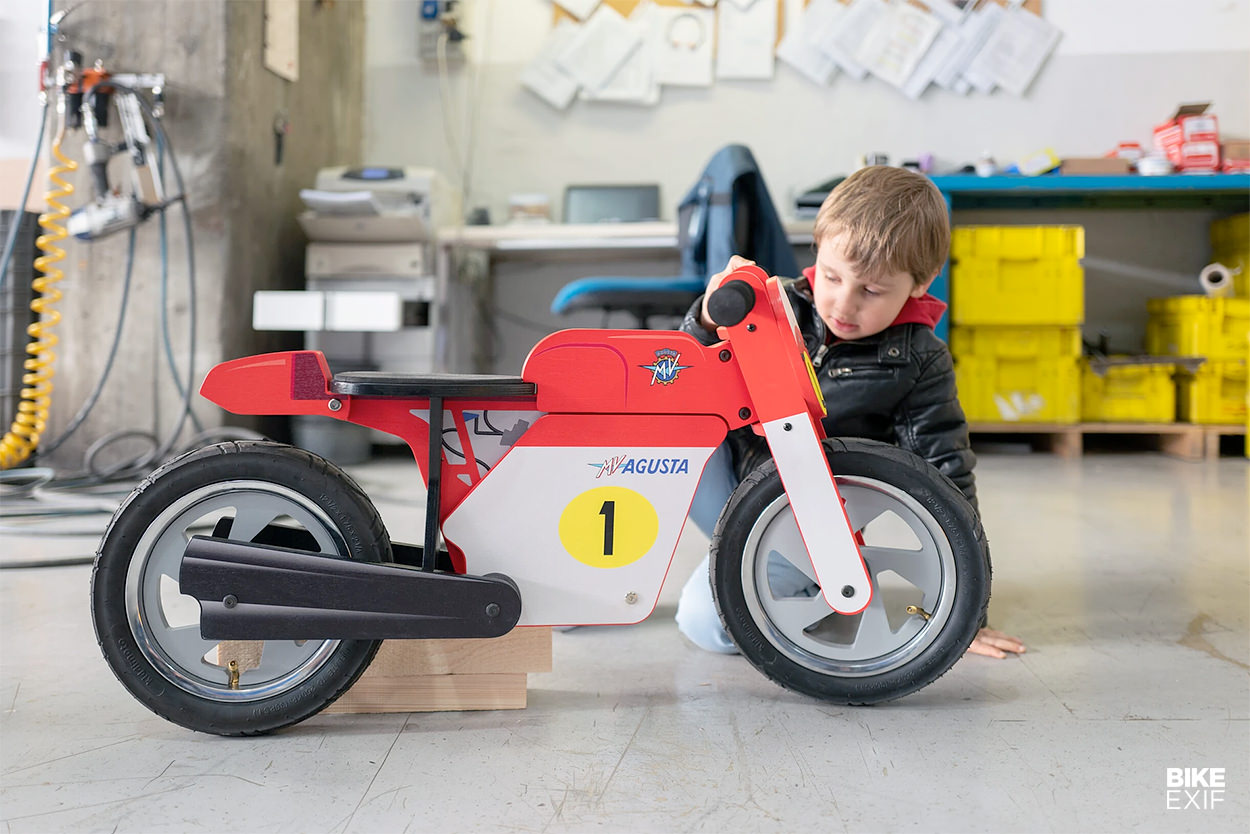 MV Agusta Balance Bike ‘Start them young’ in motorcycle parlance usually means popping your five-year-old onto a secondhand Honda CRF50, and watching them do circles in your garden.

If you’re a fan of Italian exotica, though, you can start ’em even earlier with the latest model from MV Agusta. It’s a classy wooden balance bike, painted to emulate the style of a GP bike from the era of Giacomo Agostini.

Suitable for littlies 18 months and older, the balance bike comes with a one-year manufacturer’s warranty, meets stringent European safety regulations, and costs just €165 [$206]. That’s less than the cost of a pair of new levers for the F4 in your garage, which makes it a bargain in our book. [More] 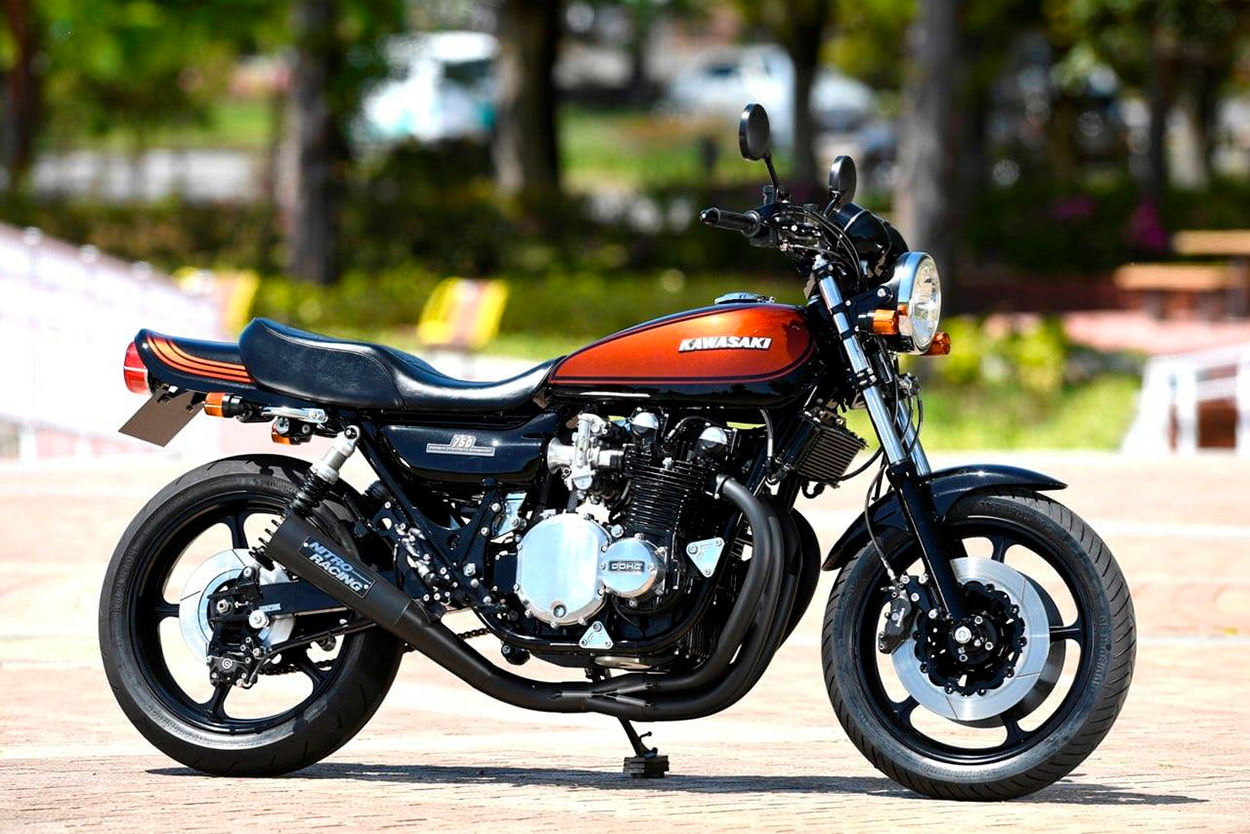 Kawasaki Z2 restomod by AC Sanctuary We know the Japanese wizards at AC Sanctuary for their no-expense-spared Zeds—machines costing upwards of $35,000, with fit, finish and performance far beyond anything that rolled off the production line in the Akashi factory in the 1970s.

But occasionally, shop boss Hiroyuki Nakamura will take on a lower-budget project, like this Z2 750 — number 557 in the long list of RCM (‘Real Complete Machine’) builds. And it hasn’t lost any of that Sanctuary magic. 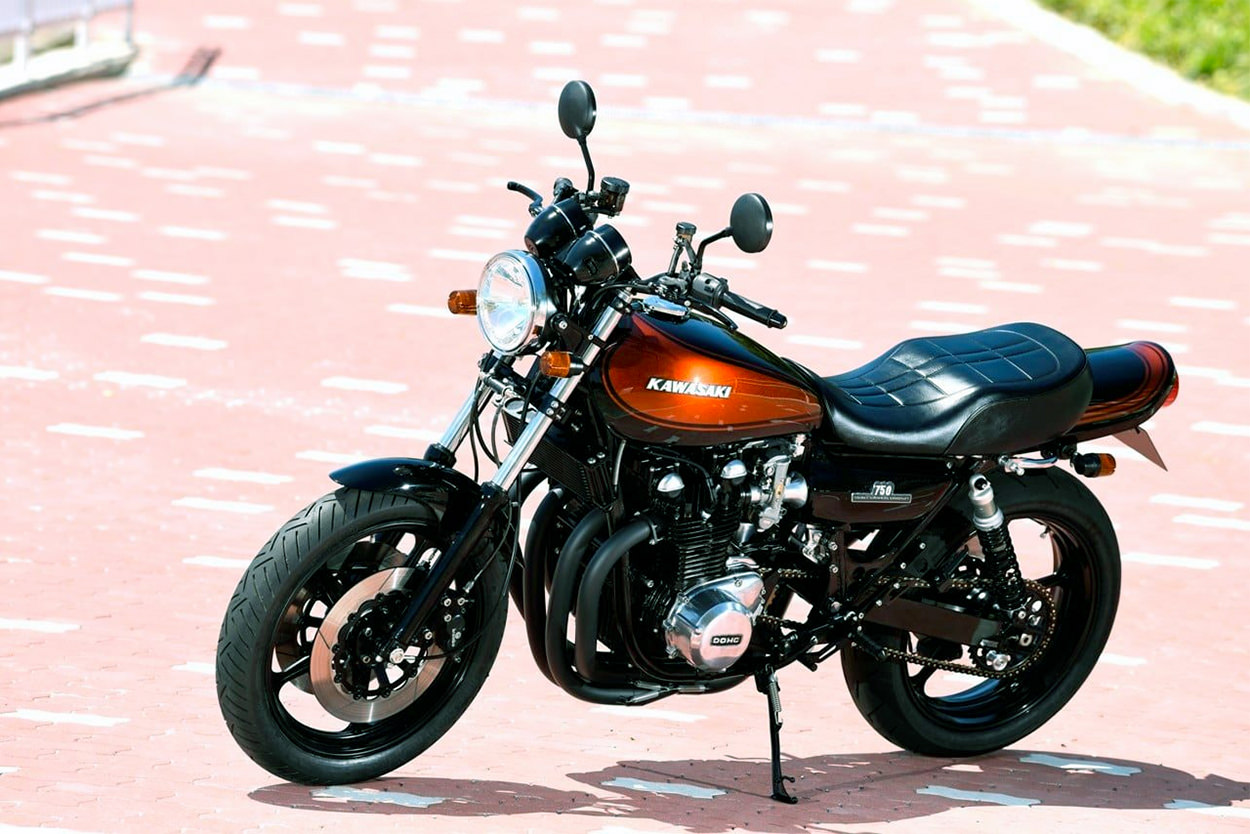 The most obvious change is the new alloy wheels, with the front dropping down a size to match the 18-inch rear. That’s still a size up from the 17-inchers usually specc’d for RCM builds, but keeps a little more of the retro vibe.

The swingarm is custom, the shocks are new, and the forks have been refurbished rather than replaced. 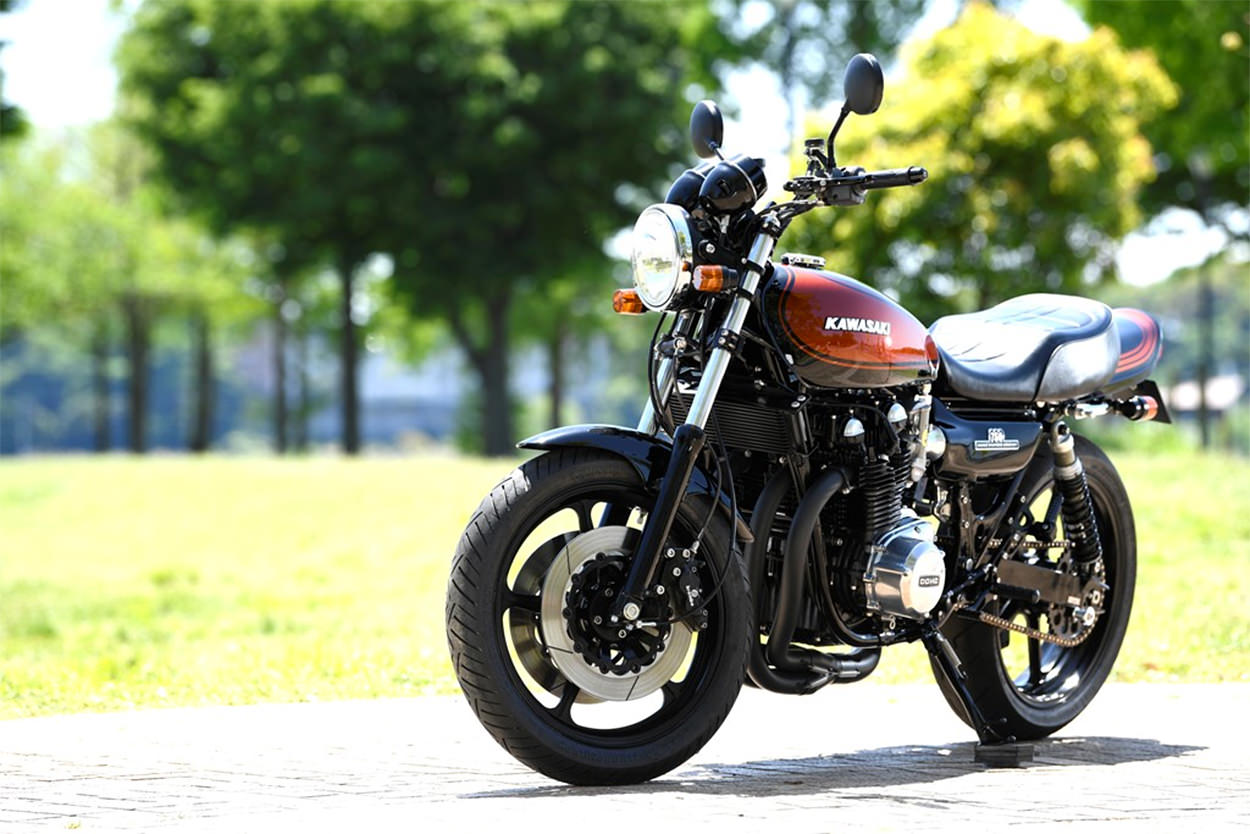 The engine has been rebuilt, right down to a balanced crank, but is essentially still in stock spec. Nakamura refers to it as a “high-level overhaul, highly reliable” with a “light tune.” The Nitro Racing exhaust no doubt helps with the horsepower figures.

With a new Daytona seat, new Brembo brakes and a Candy Brown version of the iconic ‘Fireball’ colorway on the tank, this Z2 is no half-assed budget bodge. Nakamura says his goal was to make it “amazing as a running vehicle, not a ‘treasure’,” and we reckon he’s succeeded. Even better, you don’t need to be a lottery winner to ride it. [More]

Build your own electric streetfighter Books and guides on ‘How to build a motorcycle’ have been around forever. Decades ago, you could buy plans that covered everything from frame construction to engine design; some books, such as Tony Foale’s Motorcycle Handling and Chassis Design, are still relevant today.

In years past, though, a certain amount of mechanical skill was assumed. And that was just fine, because knowing how to operate a lathe or use welding equipment wasn’t a particularly rare skill. 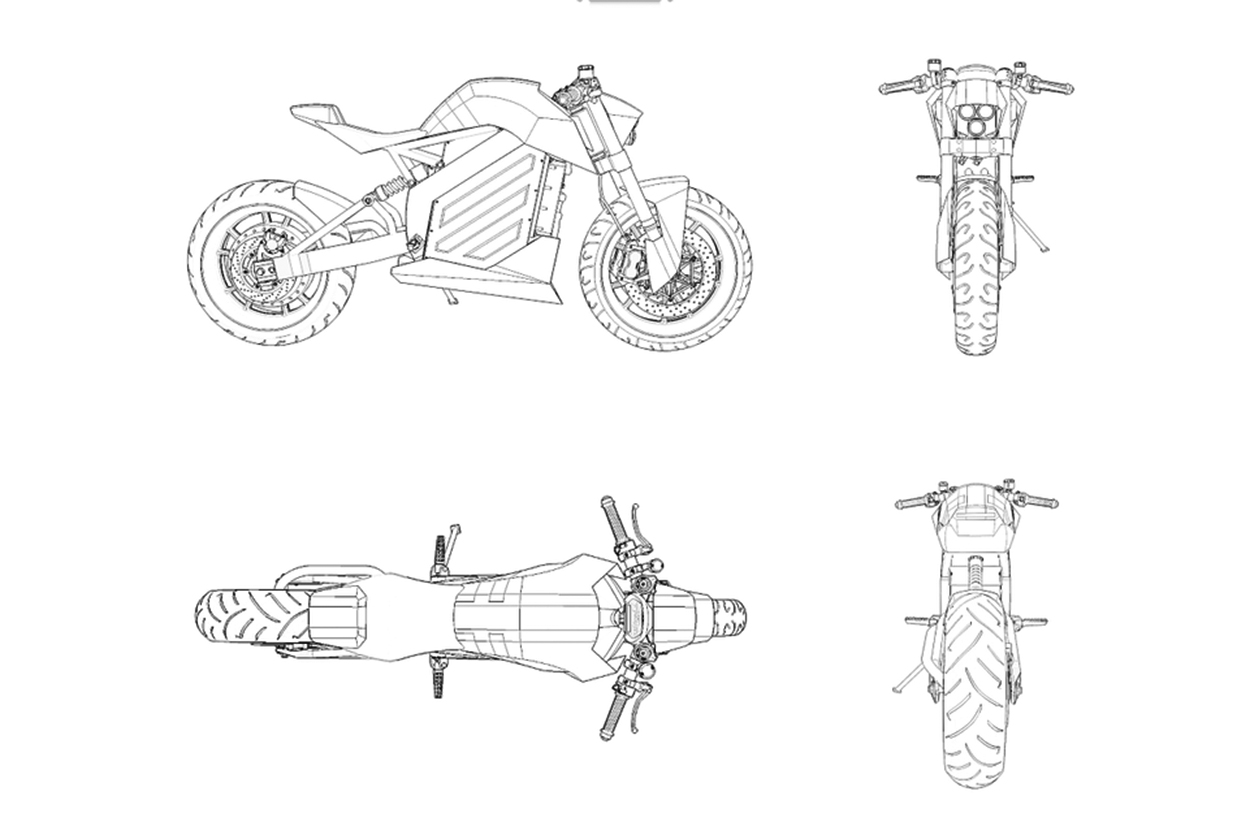 But the advent of computer-aided design has changed all that. And the website Renewable Systems Technology is now offering $10 plans—or rather, CAD files—for DIY buffs who want to make a 150 kph motorcycle for around $5,000.

There’s also a list of tools and parts you’ll need, including a 72V motor and a GSX-R750 front end. Plus a 32-minute YouTube video for a bit of handholding while you go through the process. 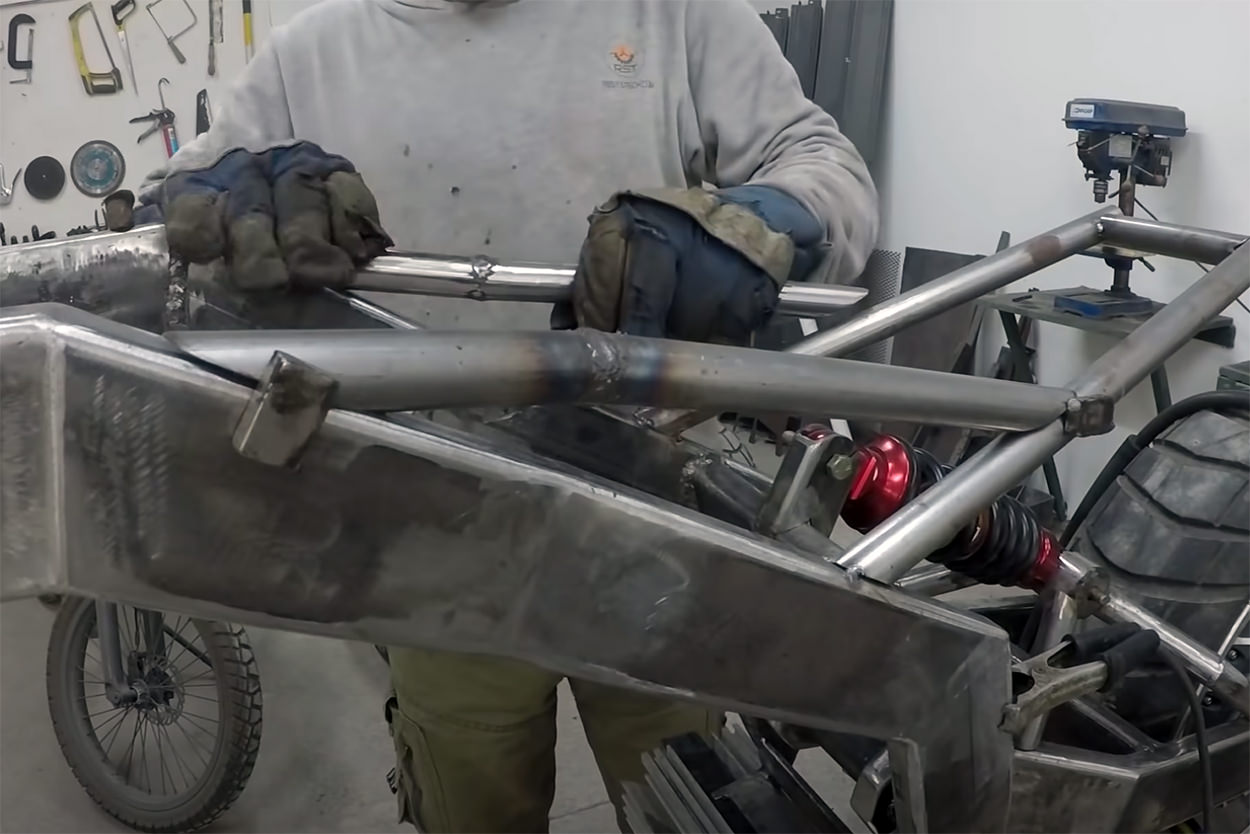 Since we’re not particularly mechanically minded, we’re unsure if the instructions are on-point or a recipe for disaster. But if you want to have a crack at building your own cut-price Zero, let us know how you get on.