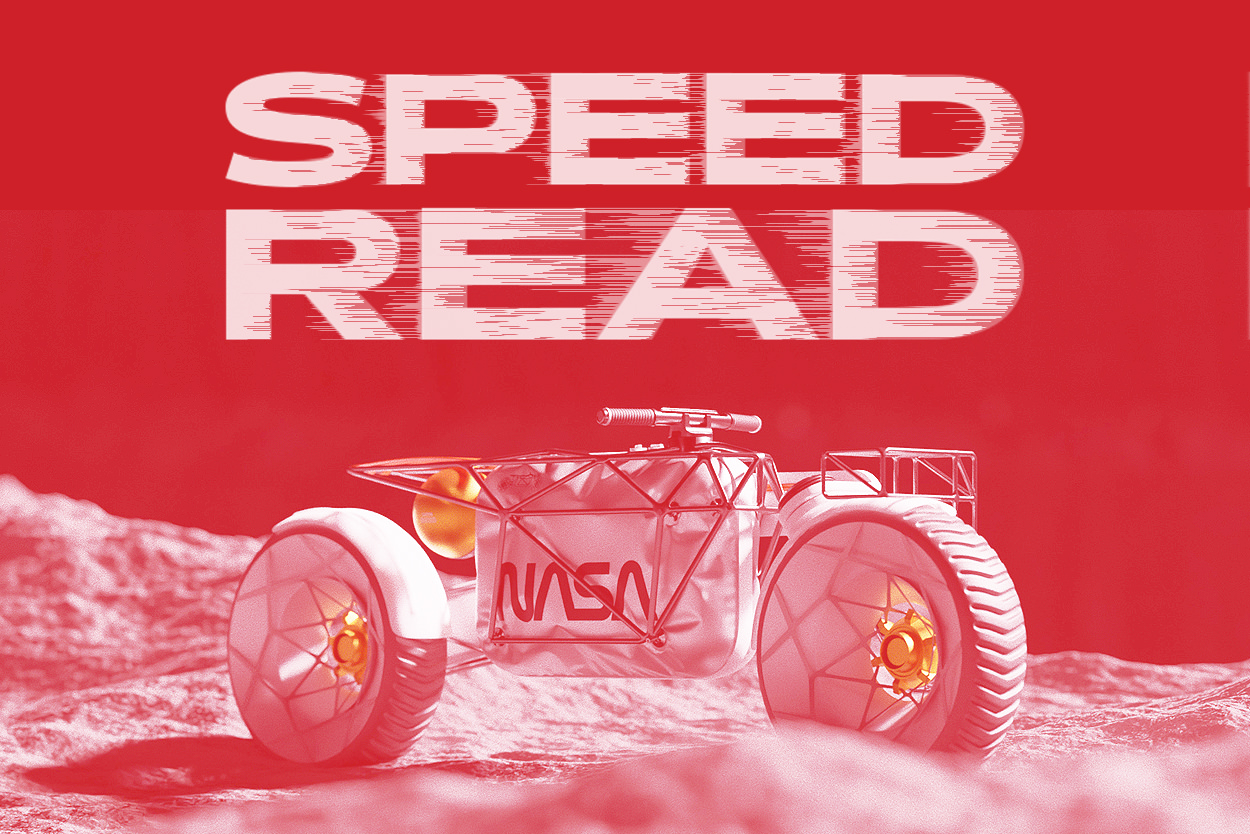 Good news for muscle bike fans: there’s a new Suzuki Hayabusa coming. We’ve also got details of a stunning new custom from Hookie Co. inspired by NASA, an electric off-roader with big-name backers, and a wild custom R nineT from a pair of Californian BMW dealerships. 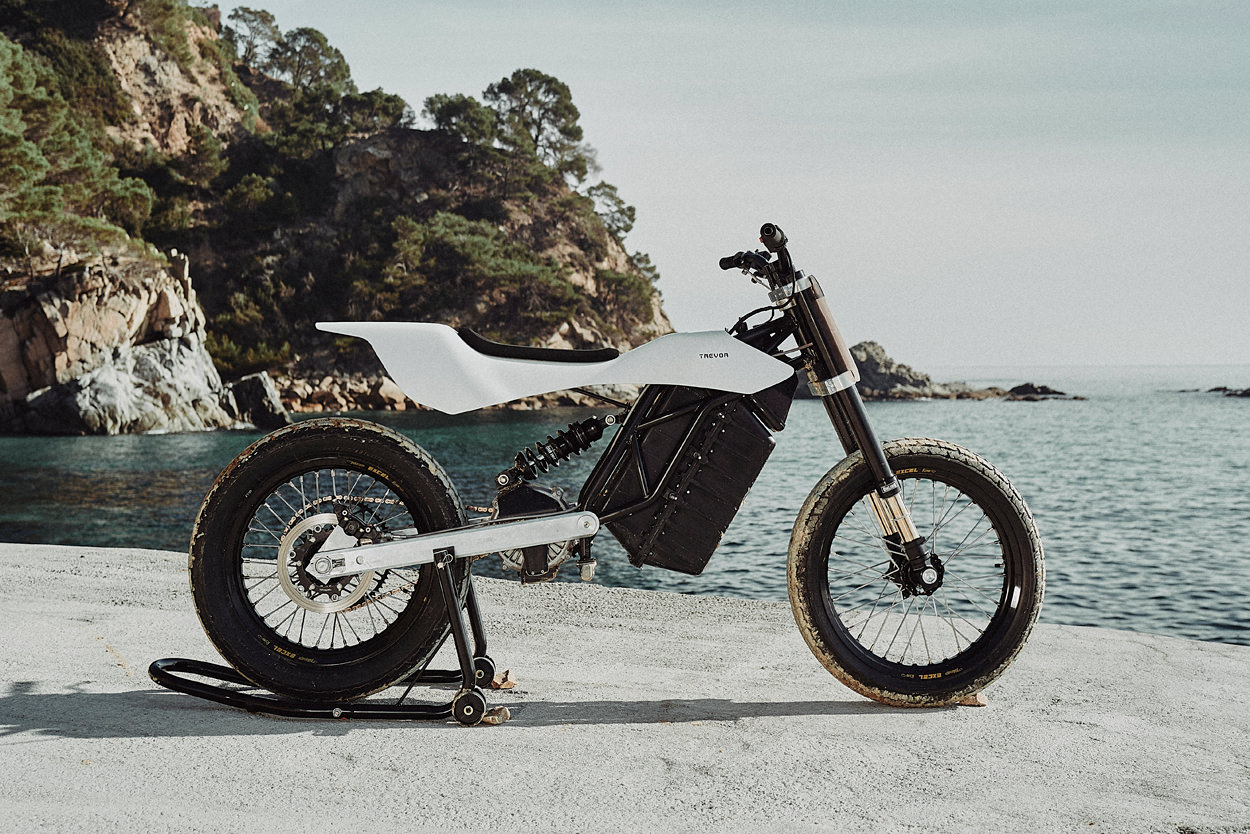 Trevor DTRe Stella There’s a still a niggling feeling of vaporware in the electric moto scene. It’s hard to keep up with all the launches and PR these days, or figure out who’s actually buying the damn things. And for every successful maker like Zero or UBCO, there’s a Brammo or Alta fallen by the wayside. 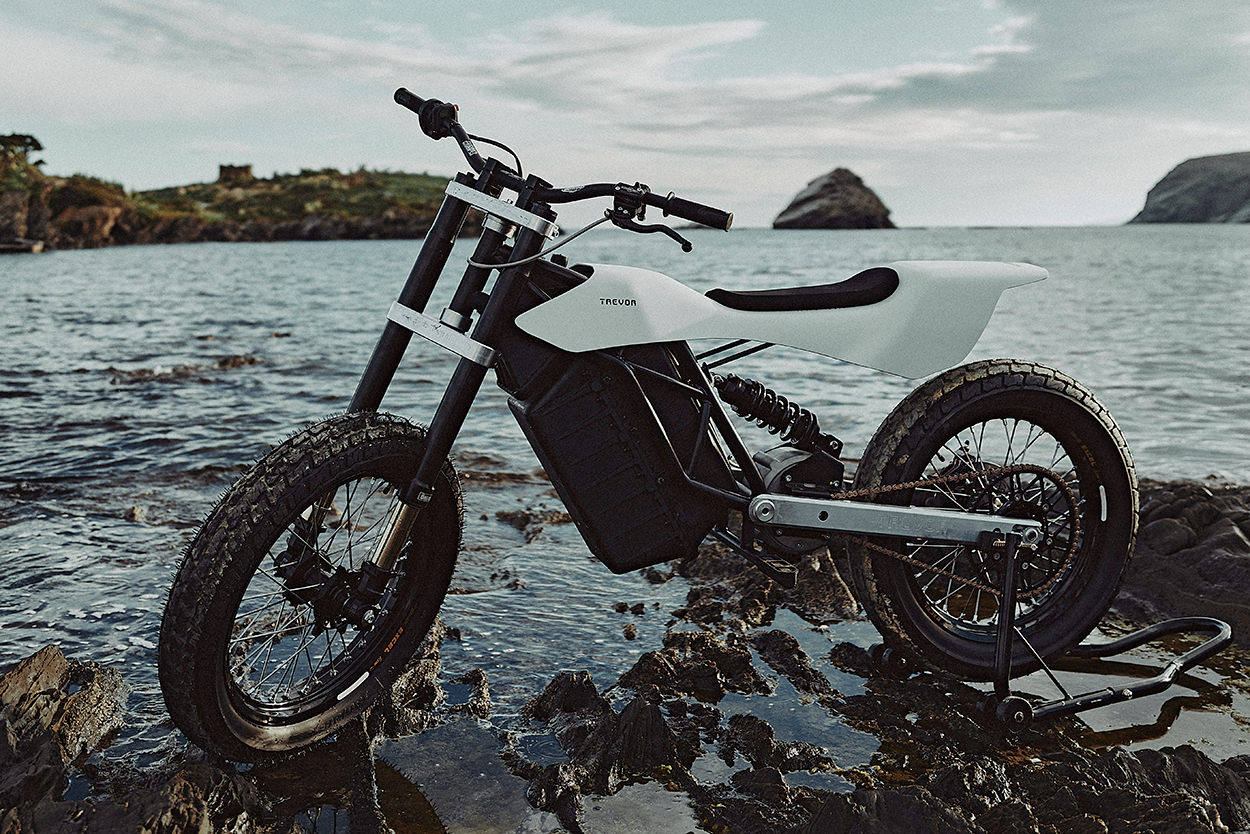 This new venture ticks a lot of boxes, though. Trevor Motorcycles founders Philippe Stella and Jeroen-Vincent Nagels have history in the moto world, and the DTRe Stella has been styled by ex-Alta designer John McInnis in California.

While working together in their home base of Cadaques, a little village near Barcelona, Philippe and Jeroen-Vincent used a vintage dirt bike for local shopping trips and spontaneous entertainment—and that’s where the idea for a ‘clean dirt bike’ came from. 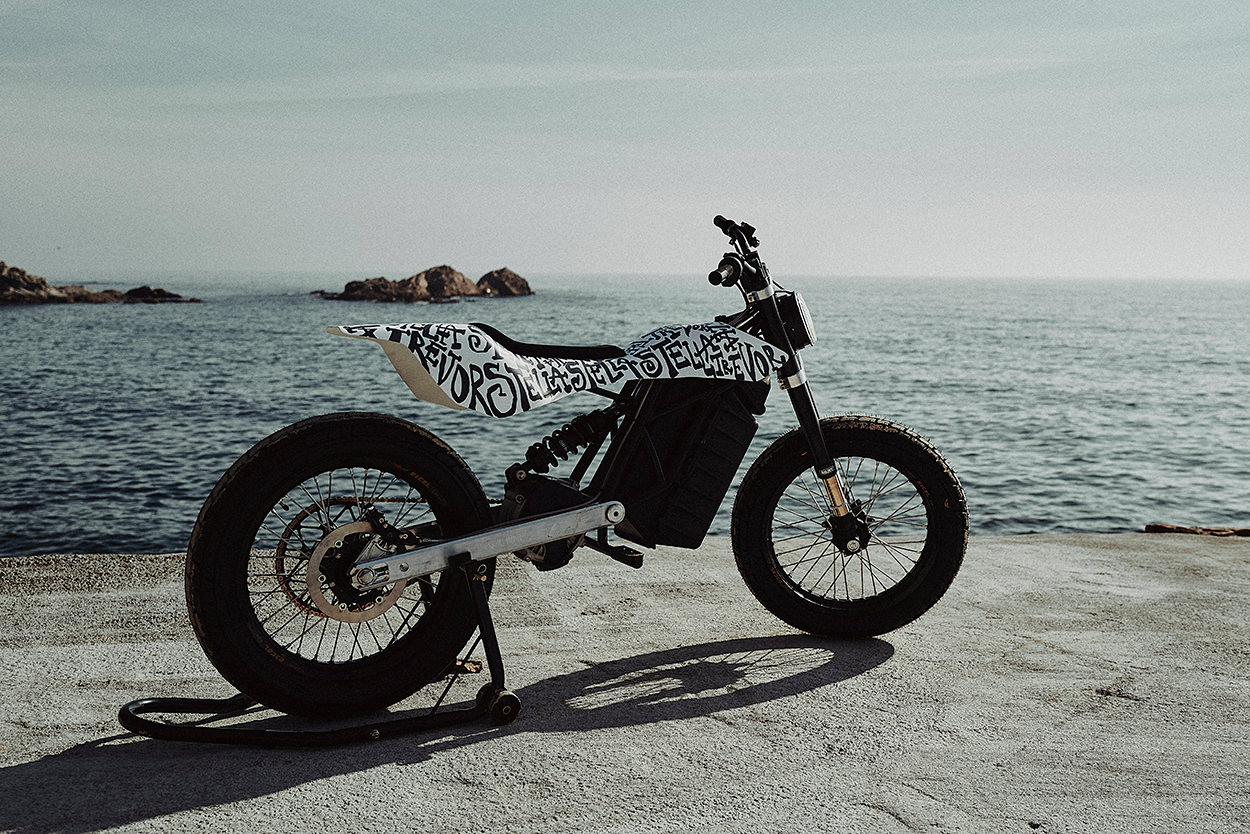 The powertrain (and manufacture, apparently) is handled by the established Belgian manufacturer Saroléa, and the frame was designed by fellow Belgian Brice Hennebert—best known to readers as the man behind Workhorse Speed Shop.

The Stella comes in two versions: off-road only, or road-legal. It’s essentially a fun, light go-anywhere machine with a claimed top speed of 90 kph [55 mph] and weight of just 79 kg [174 lbs]. 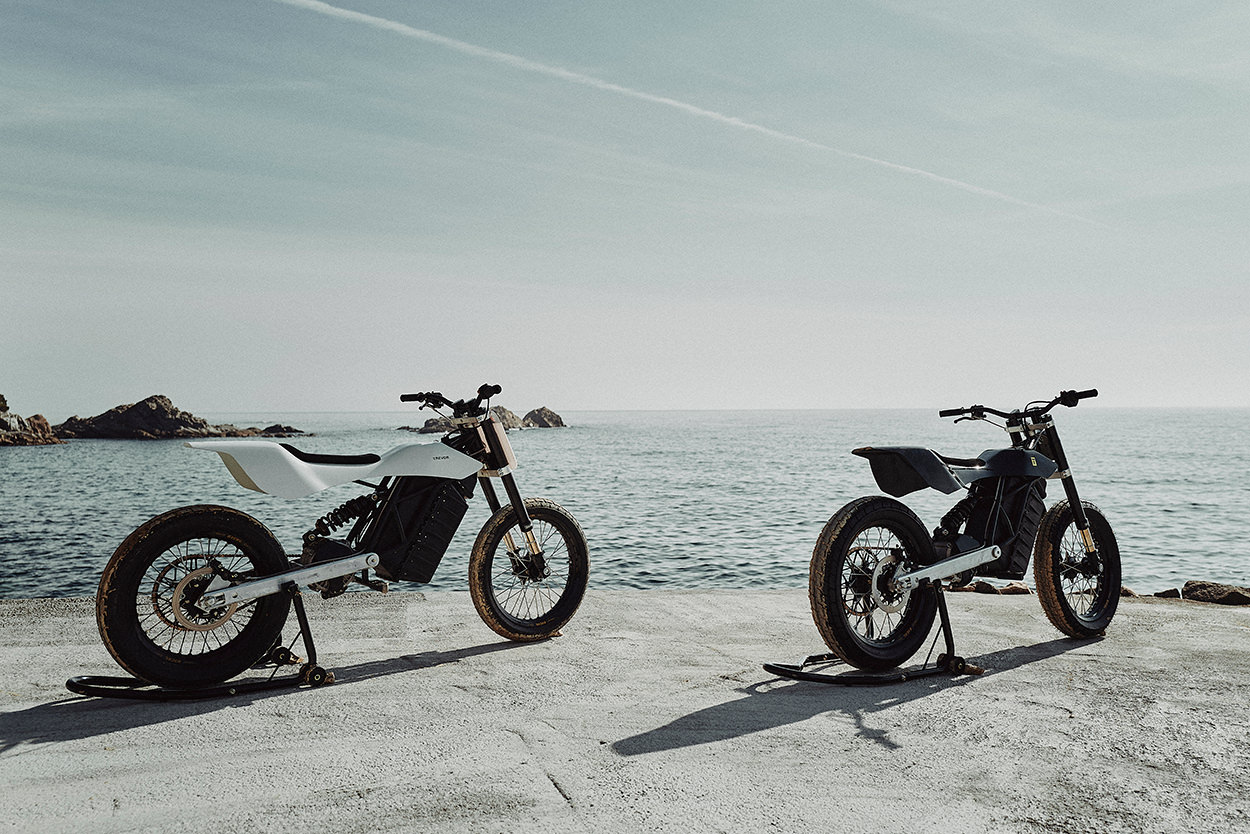 Power comes from an 11 kW brushless DC 3-phase electric motor with a 1.5-hour riding time out on the trail, and the battery pack is a 2.7 kWh Lithium-ion unit with a charging time of 1.3 hrs with a 3 kW external charger.

The components are top quality, with Öhlins suspension all round, Beringer brakes, and 19-inch Excel wheels. There’s a two-year warranty and pricing starts at €12,995 [US$15,650]. 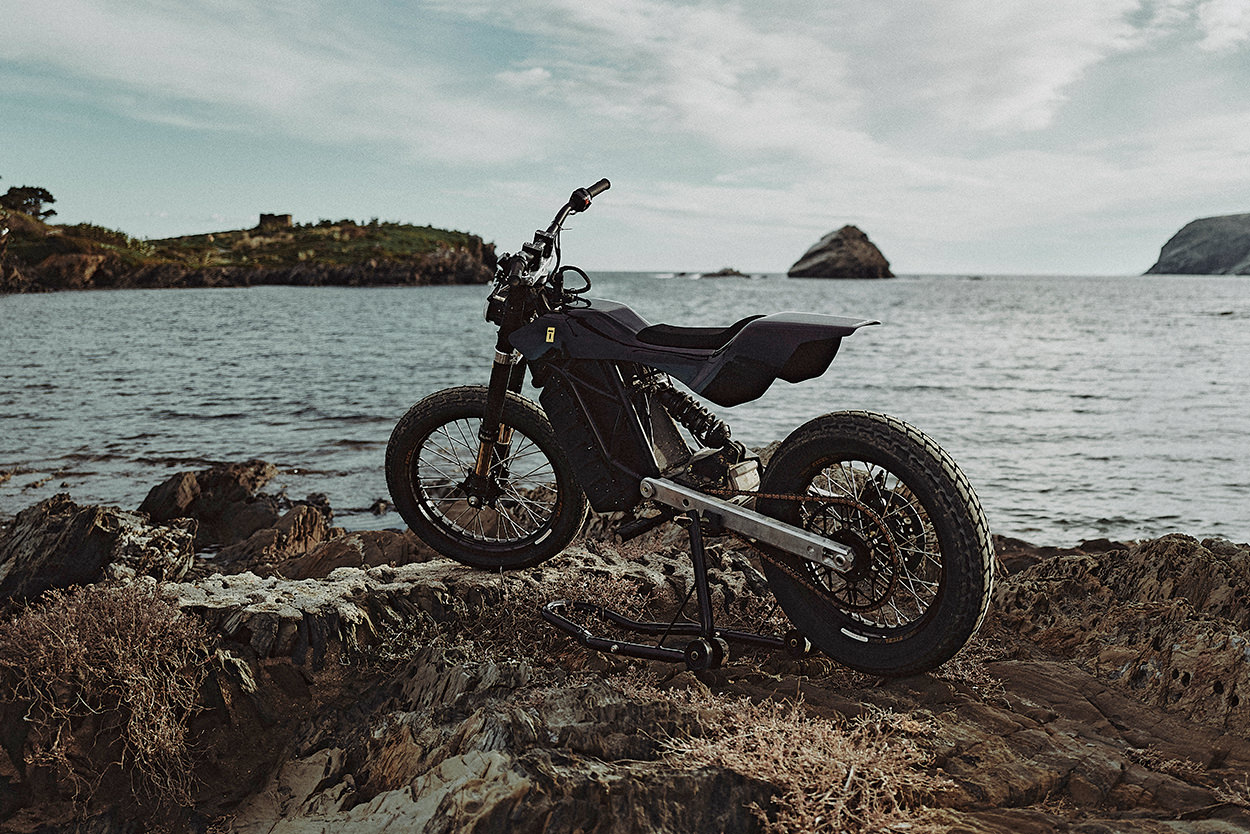 That’s about the same as a Zero DSR dual-sport bike, but that’s a different beast altogether—and weighs well over twice as much as the DTRe Stella. If you’re after something compact, silent and stylish, get the info you need on the Trevor Motorcycles website. 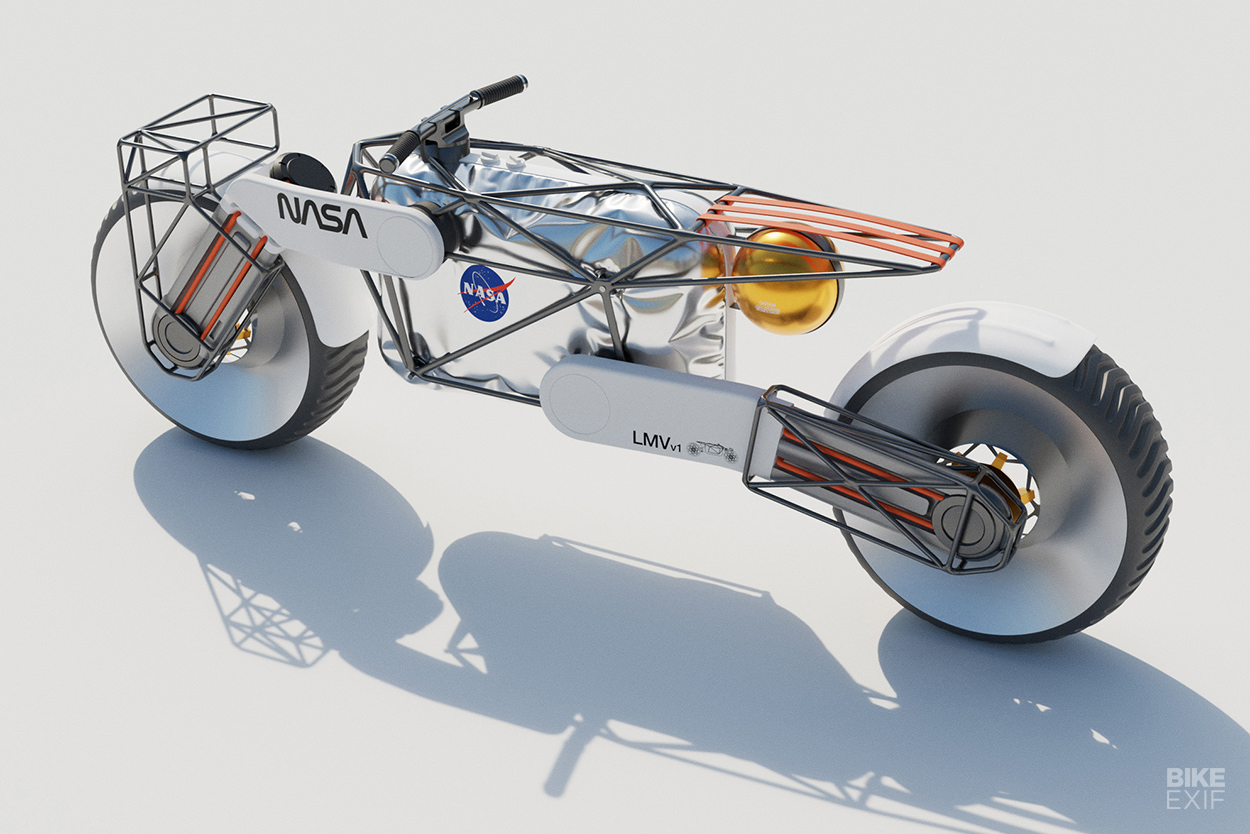 Hookie’s NASA-inspired ‘Tardigrade’ Our favorite Dresden-based workshop has just given us a glimpse of its next project: a futuristic moon rover motorcycle due to be unveiled at the Petersen Automotive Museum in LA this summer. And it’s like nothing else on earth. 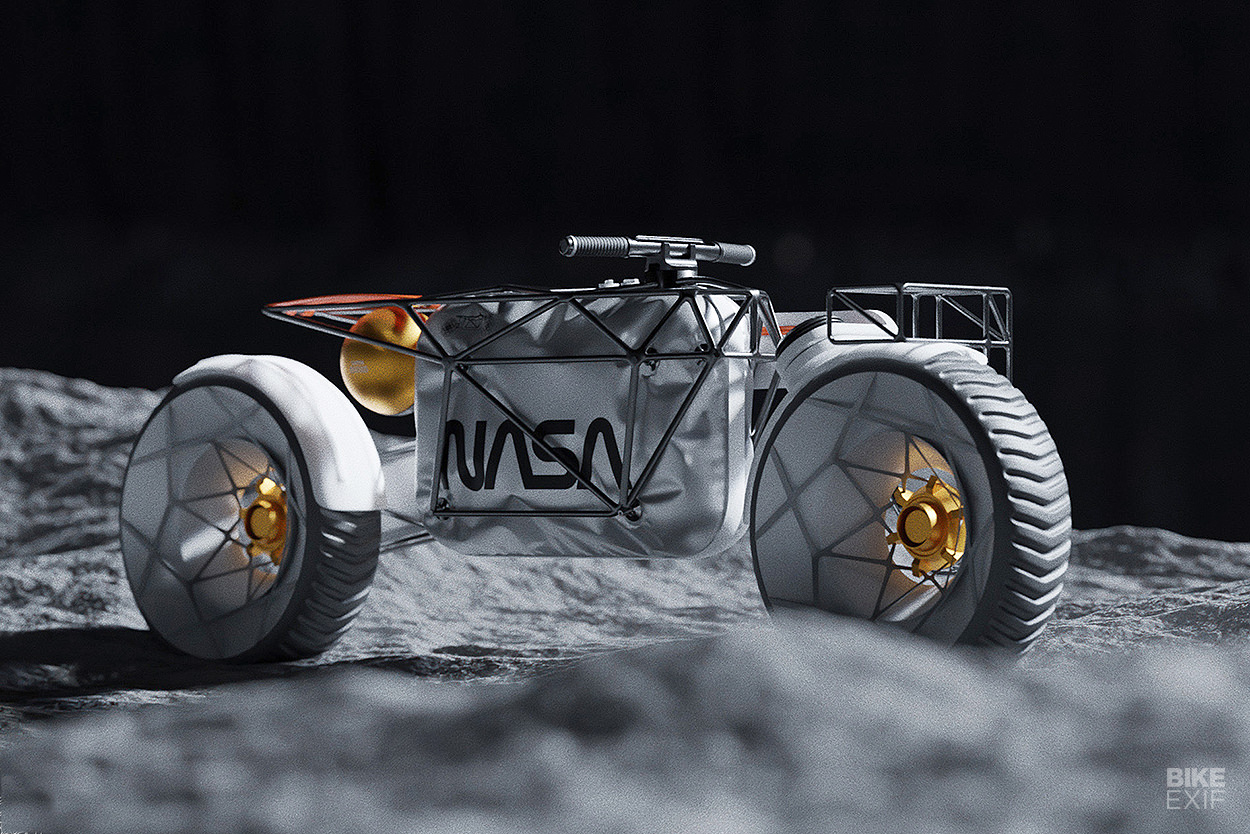 ‘Tardigrade’ is based on a study by Russian designer Andrew Fabishevskiy, whose slender exploration vehicle concept created waves after NASA announced a new moon mission for 2024.

Fabishevskiy‘s concept condenses the simplicity of earlier moon rovers in a neat two-wheeler, with balloon wheels and “lunar pragmatism.” 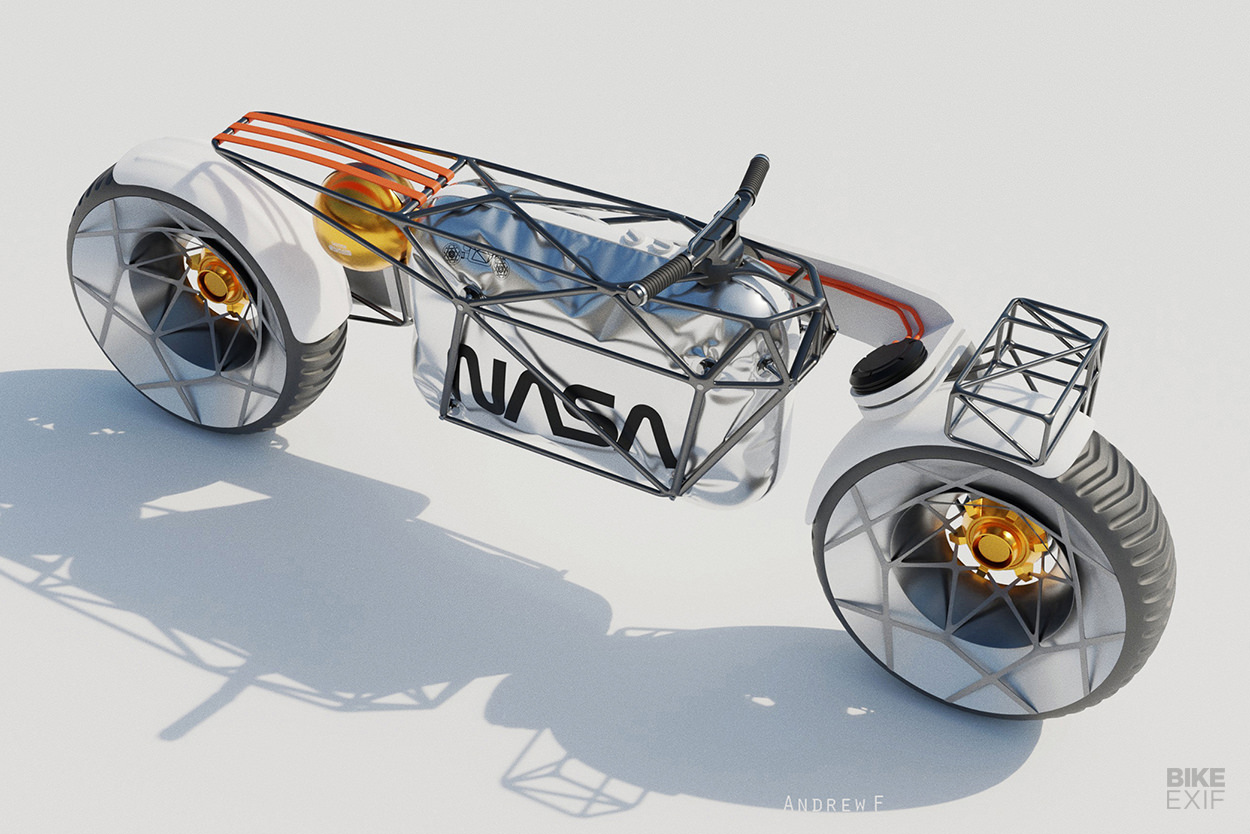 To follow the ethos of Fabishevskiy’s design study, Hookie are tapping into some pretty high tech. A thin aluminum sandwich frame will enclose the battery, which is protected by aerospace-grade Kevlar fabric.

The complex wheel designs will come straight out of a 3D printer, and those wheels will be secured by carbon-sprung, single-sided swing arms. 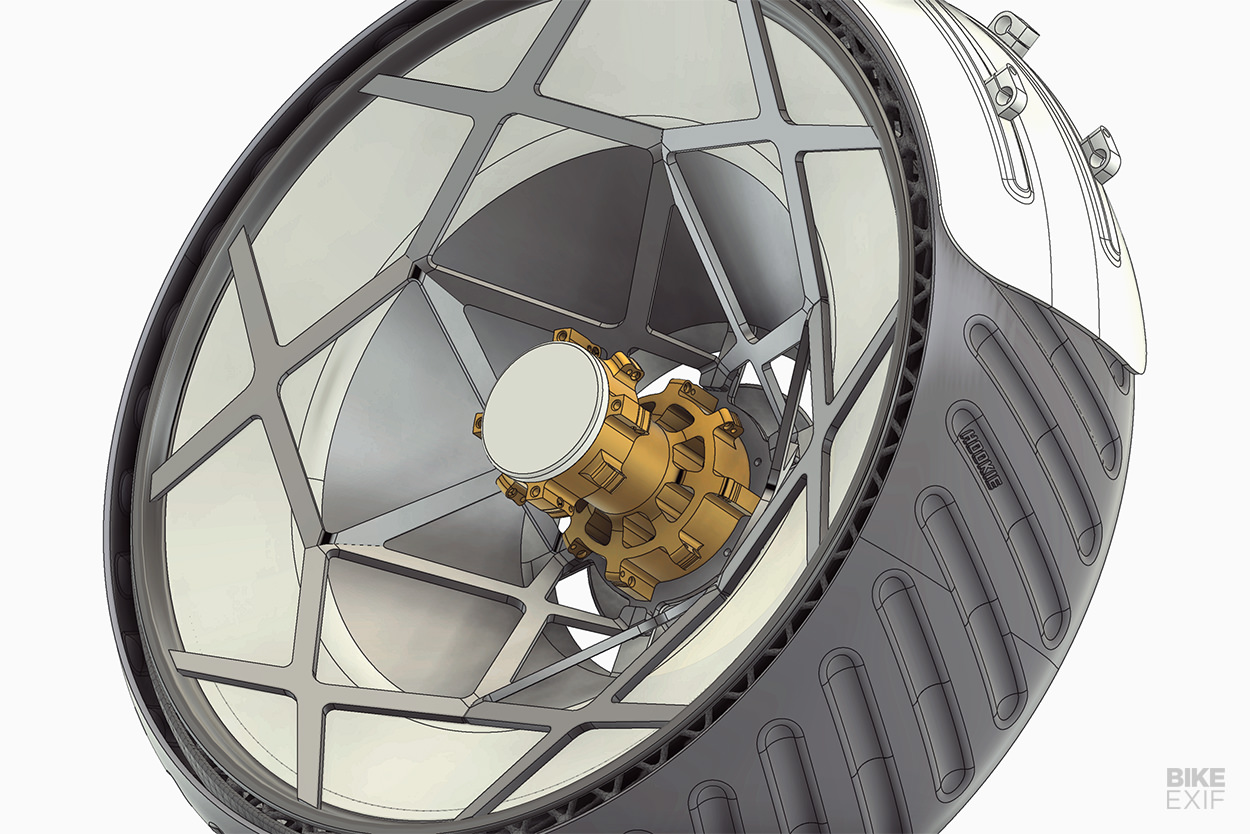 And the name? The tardigrade is a micro-animal, usually less than a millimeter long, that can survive the most extreme environmental conditions. After the failure of an Israeli moon landing in 2019, several thousand tardigrades were lost—but scientists are convinced they can be revived. “Without oxygen and water, they fall into a deep, frosty sleep, which lasts for decades,” says Nico Müller, co-founder of Hookie. 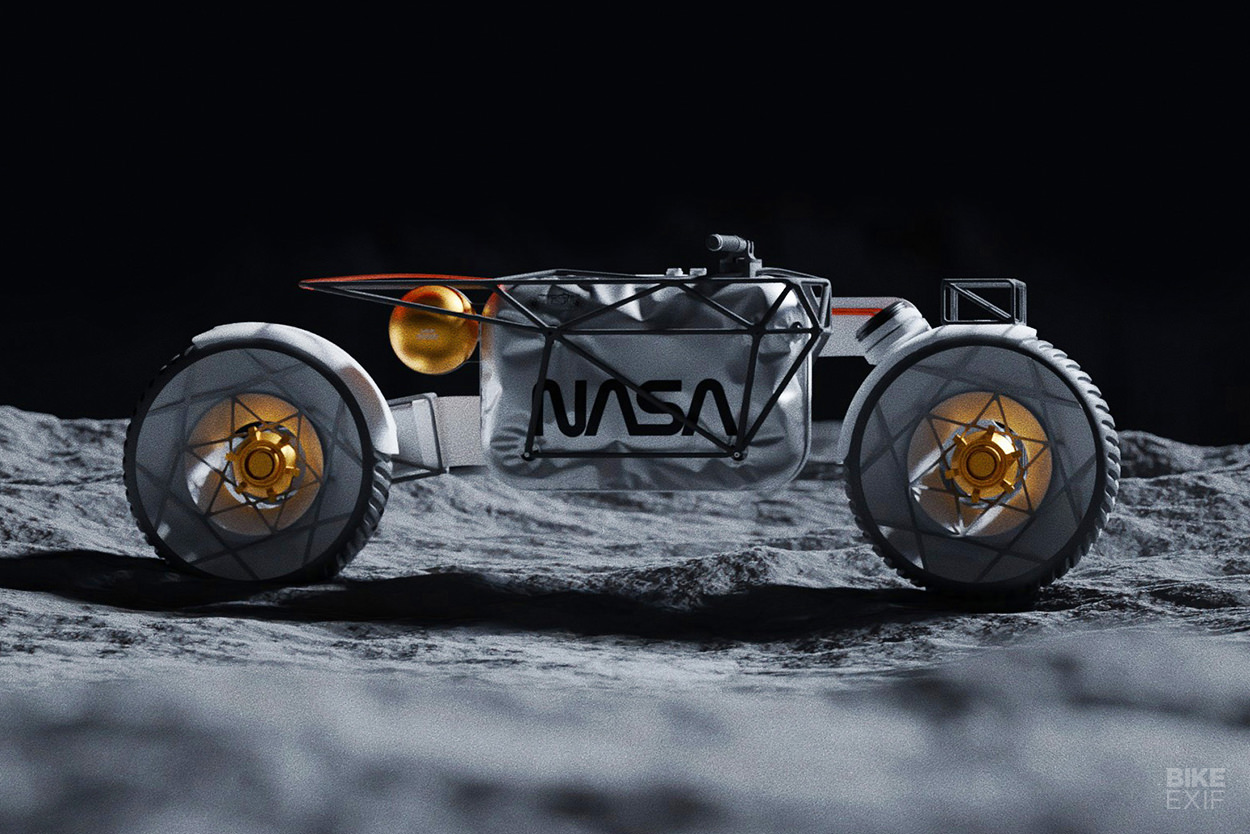 To see Hookie’s own Tardigrade in the metal, we’ll have to wait for the Overland exhibition at the Petersen Museum in California, starting in July. Until then, we’ll be documenting this lunatic project with interest. [Hookie Co.] 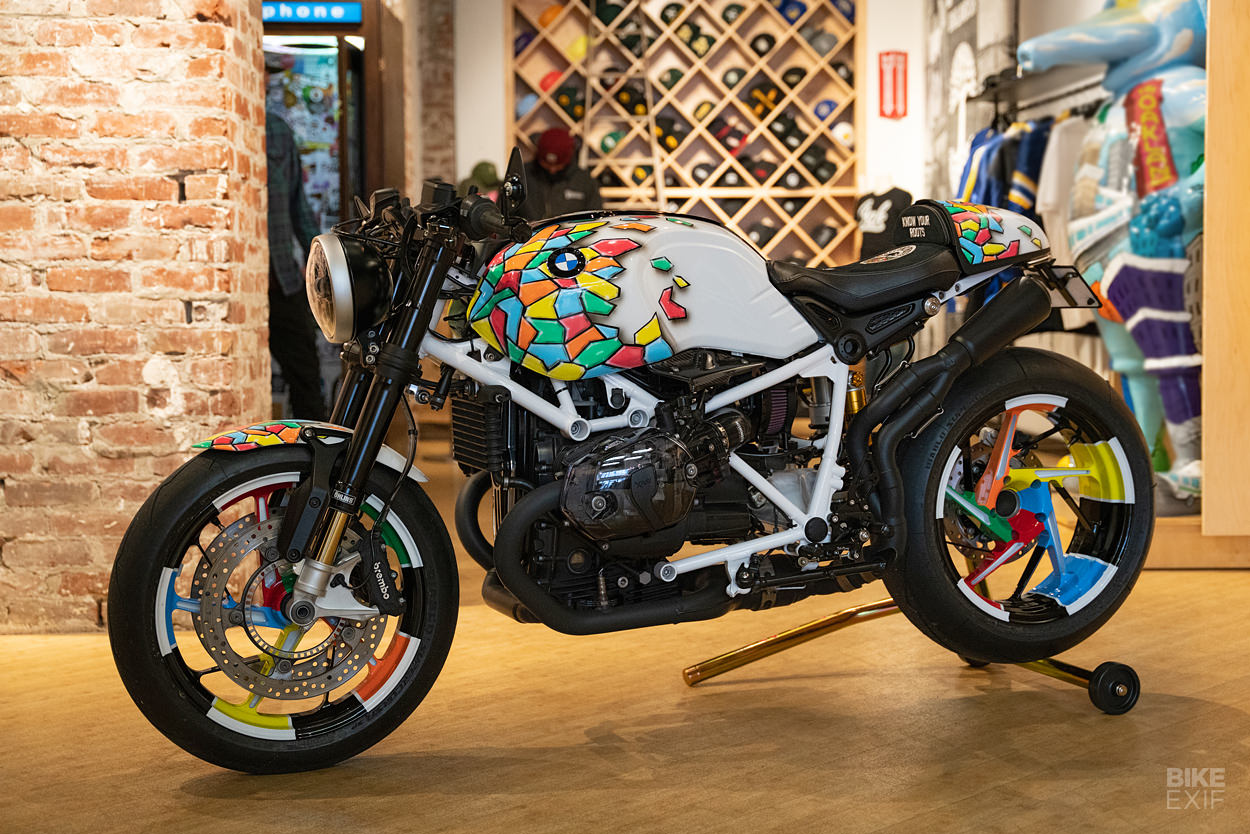 ‘Rooted 9T’ by BMW of San Francisco We always find artist collaborations interesting, because they usually inject a splash of color without being tied to conventional reference points or established visual history.

This zesty BMW R nineT was built for the Oakland Roots soccer team, and designed with the help of local artist Vogue TDK and stunt rider Kellen Knick. 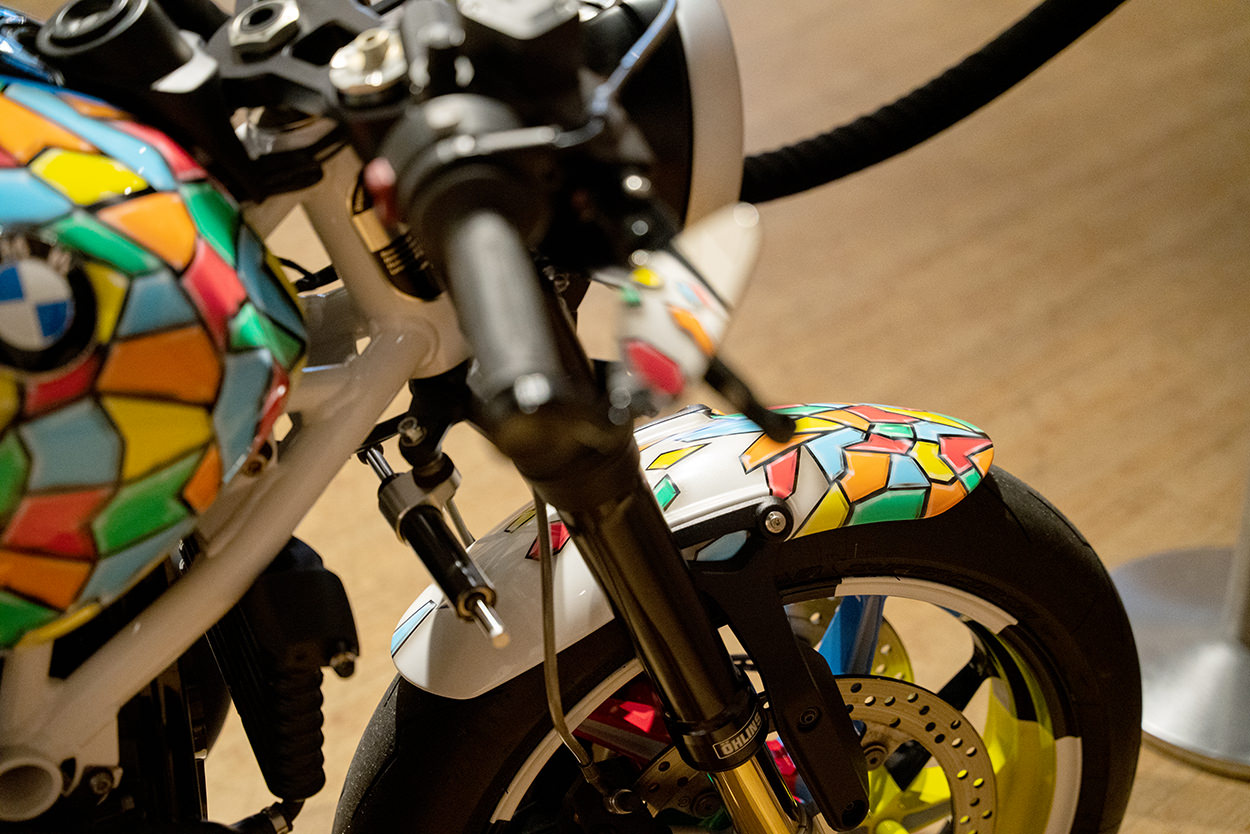 The ‘Rooted 9T’ began life as a 2015 R nineT, torn down by the BMW dealerships in Concord and San Francisco. The tank, fender and tail went off for a repaint, incorporating the mosaic-style colors and patterns associated with the Roots team.

Mechanical upgrades include Öhlins suspension and a full exhaust system from Unit Garage in Italy. The air box has been removed to make room for an RSD air-cleaner and custom air intakes and multiple other hard parts have been powder-coated, ceramic-coated or anodized by pros throughout the Bay Area. 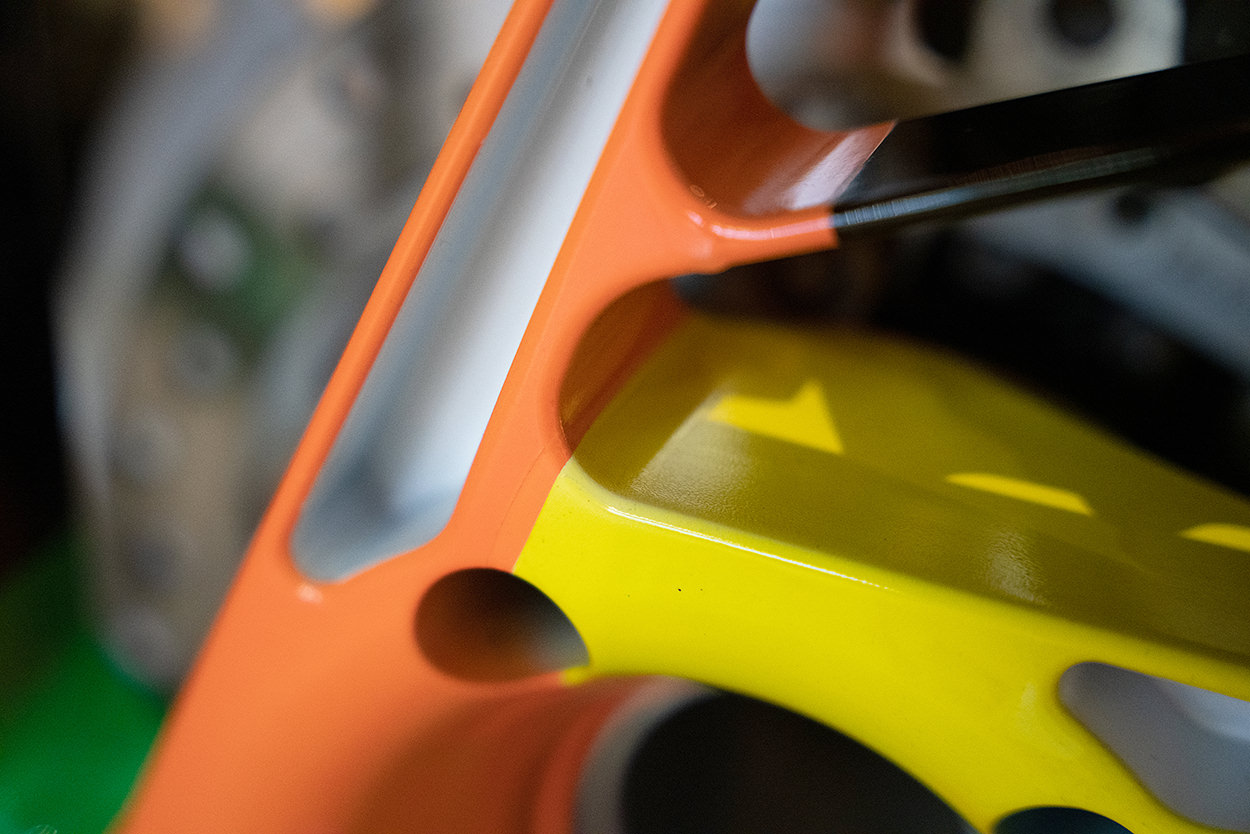 Prototype carbon fiber clip-ons from Daedalus Designs and a compact Motogadget instrument cluster were mounted to clean up the cockpit area, and there’s an adaptive headlight conversion from Motodemic.

The seat unit was custom embroidered by Luimoto in British Columbia, and the striking wheels are from a BMW HP2 Sport—expertly refinished by Ginger Ann Schmidt of Kiss My G.A.S. Industries. 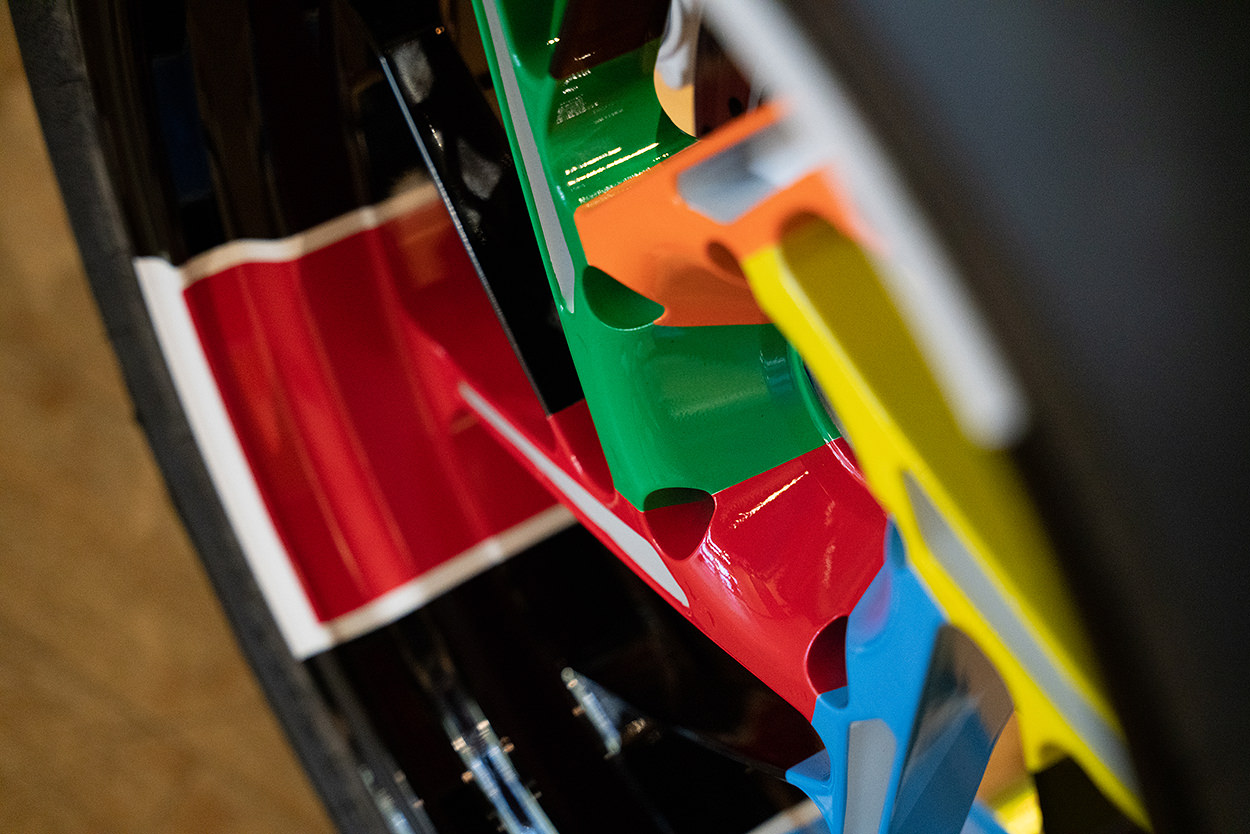 You’d definitely need to be the outgoing type to ride a bike like this—but it brings a smile to our jaded faces. And hopefully introduces a few more Oakland folks to the thrills of motorcycling. [BMW Motorcycles of San Francisco] 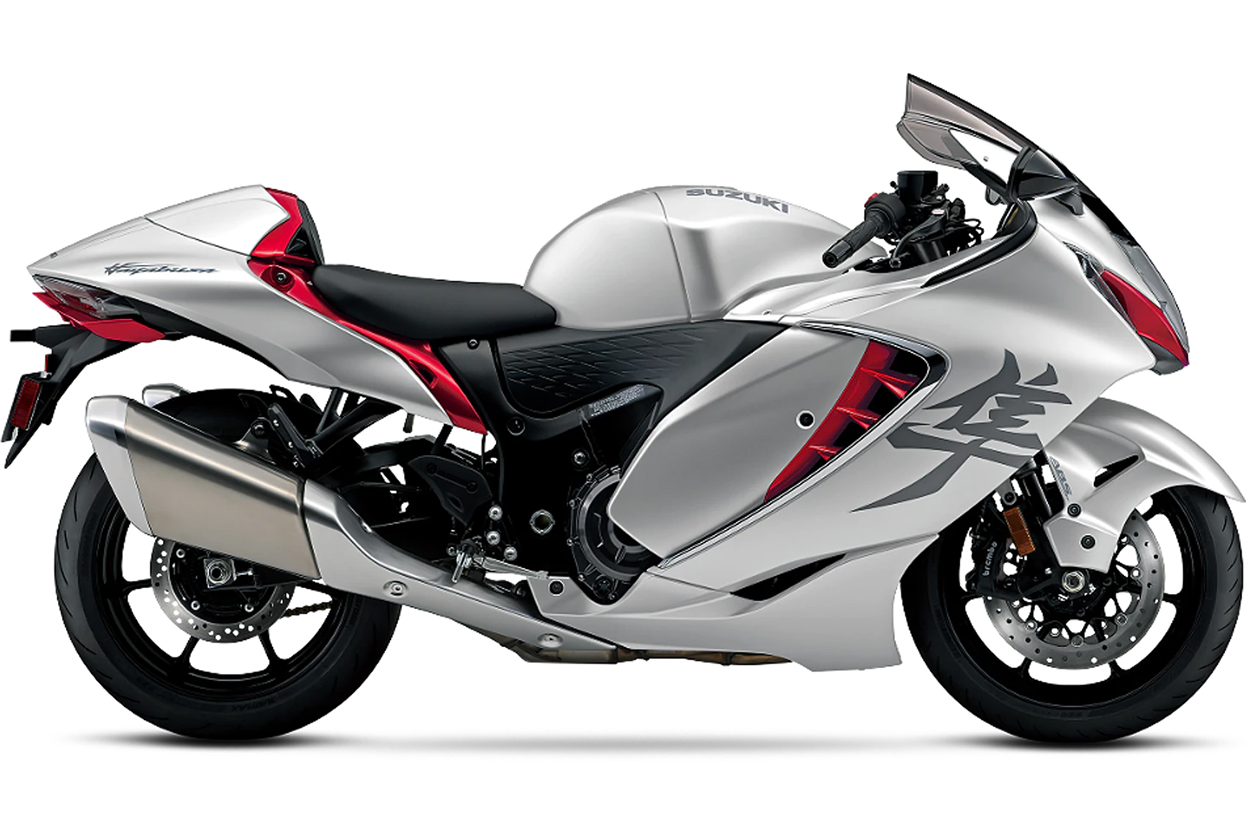 The Suzuki Hayabusa lives on The past year has been full of funerals for older bikes unable to meet stringent emissions standards—or not generating sufficient sales to justify the cost of getting them through those standards. 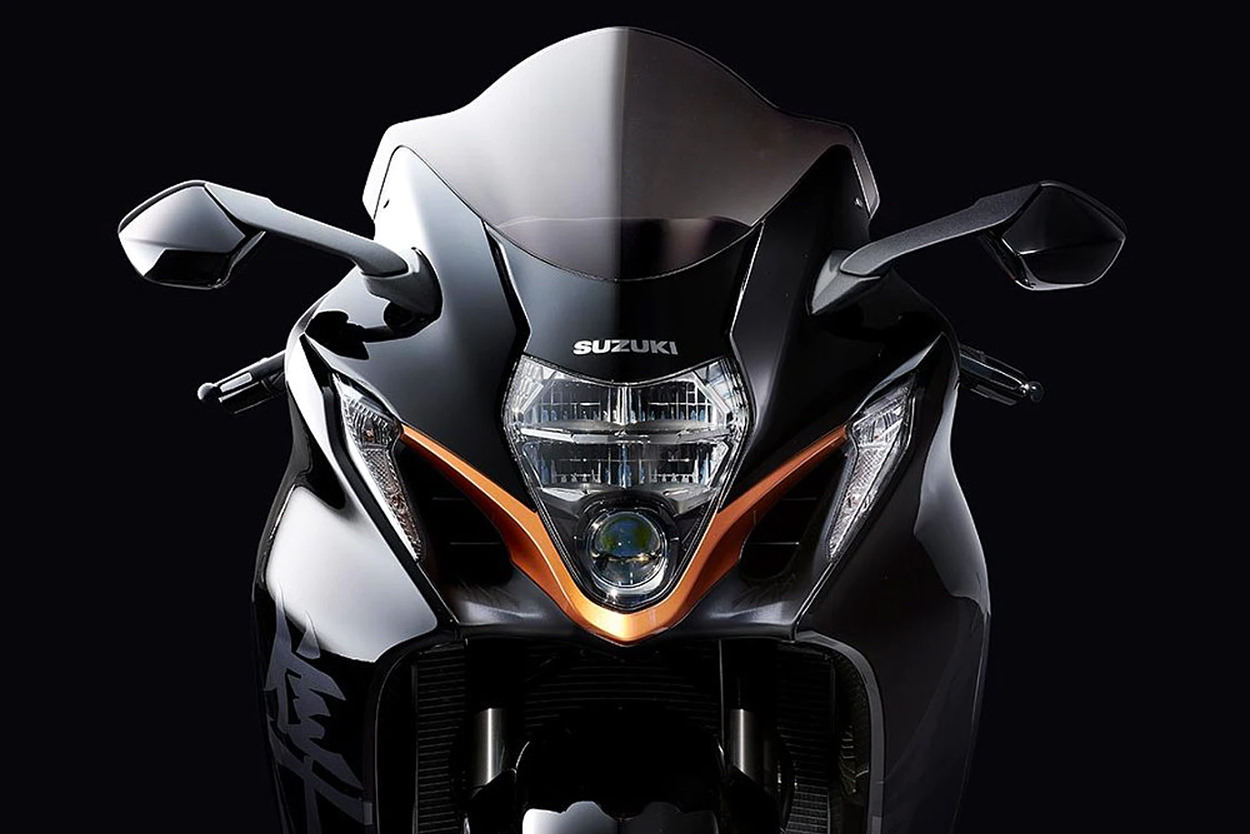 But there’s good news for muscle bike fans, and folks who like dropping huge inline-fours into small Japanese sports cars: the Hayabusa is here to stay.

Suzuki has just revealed details of the 2022 GSX1300R, which comes with 550 new or redesigned parts, sharper styling, LED lighting, and a pair of colossal mufflers. 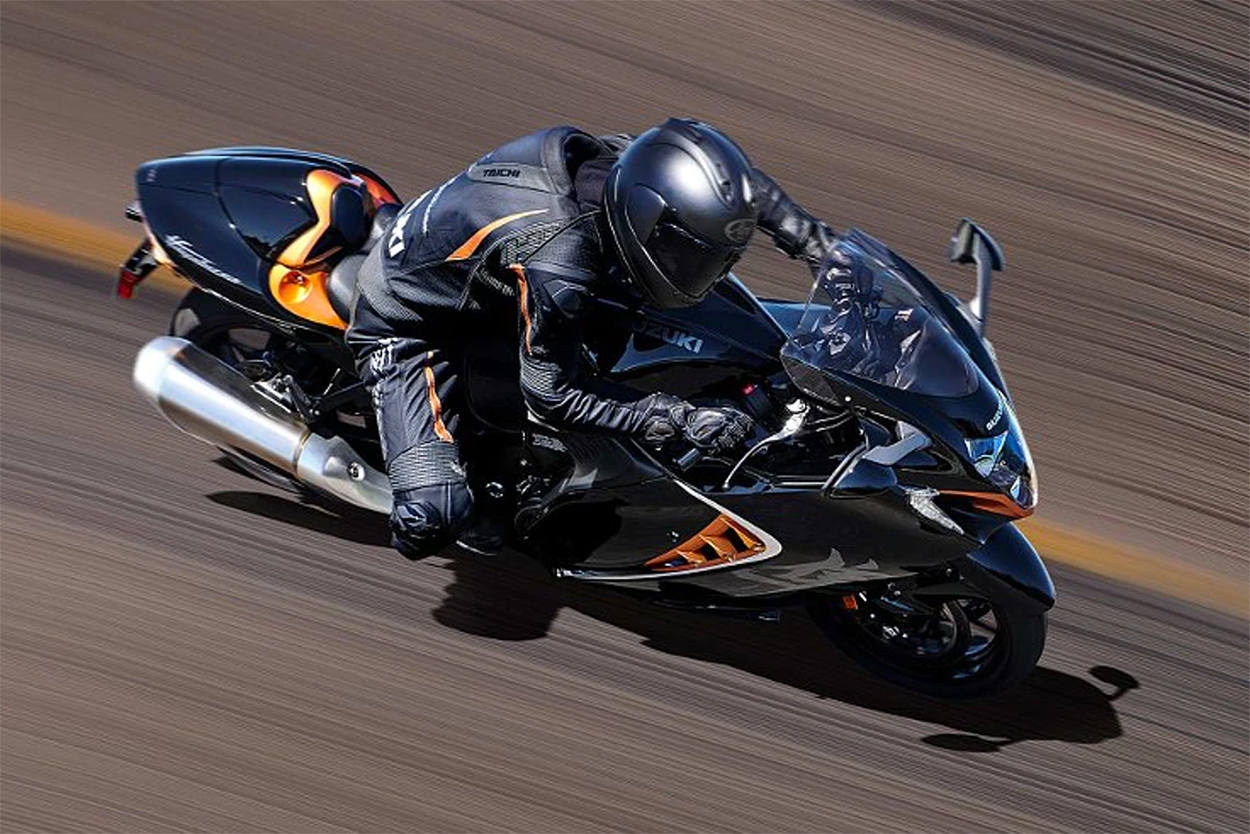 The Hayabusa also gets the latest Brembo Stylema brake calipers, more electronics than a SpaceX rocket, and something called an ‘Active Speed Limiter.’ This allows the rider to program a speed that the bike will not exceed, which seems like a rather Kafkaesque move given the legendary status of the ‘Busa in the speed wars. 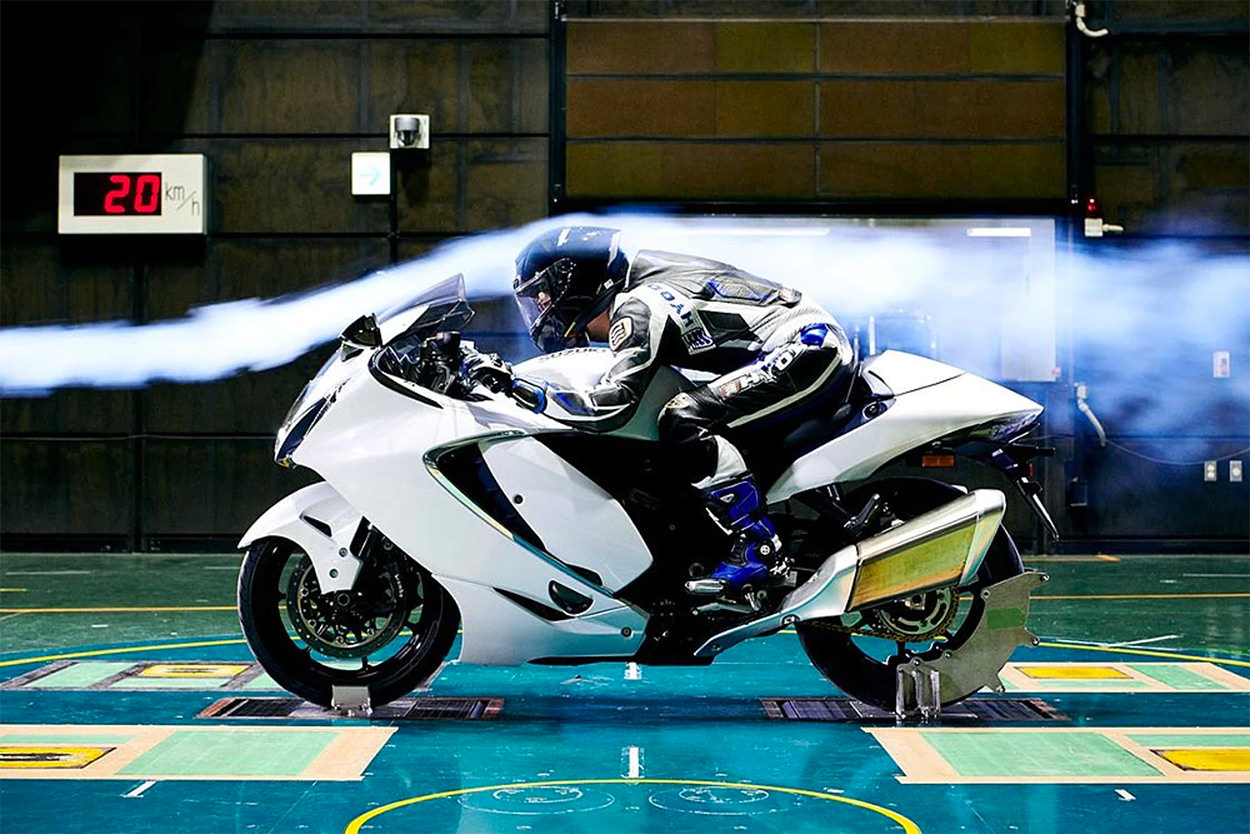 It’s not a bike we’d put in the EXIF garage for the daily shopping runs, but on the other hand, we’d be foaming at the mouth if Suzuki gave one of these (and carte blanche) to a top custom shop. [Via]