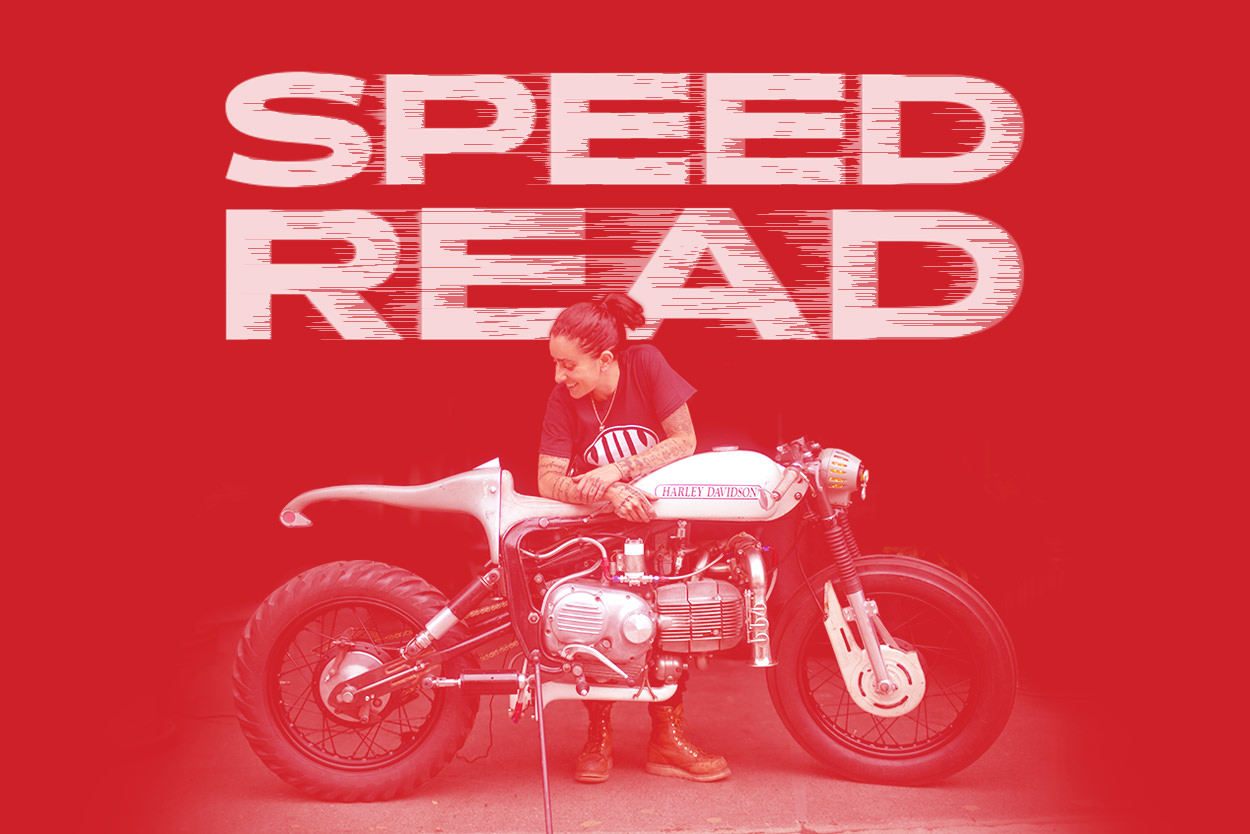 We’ve covered all the bases this week—from a 1980s Honda CB to a rendering of the new Aprilia Tuareg 660 adventure bike. Plus a pair of Aermacchis from J. Shia, a rare 1930s V-twin from a Russian museum, and a look at BMW’s new R18 tourers. 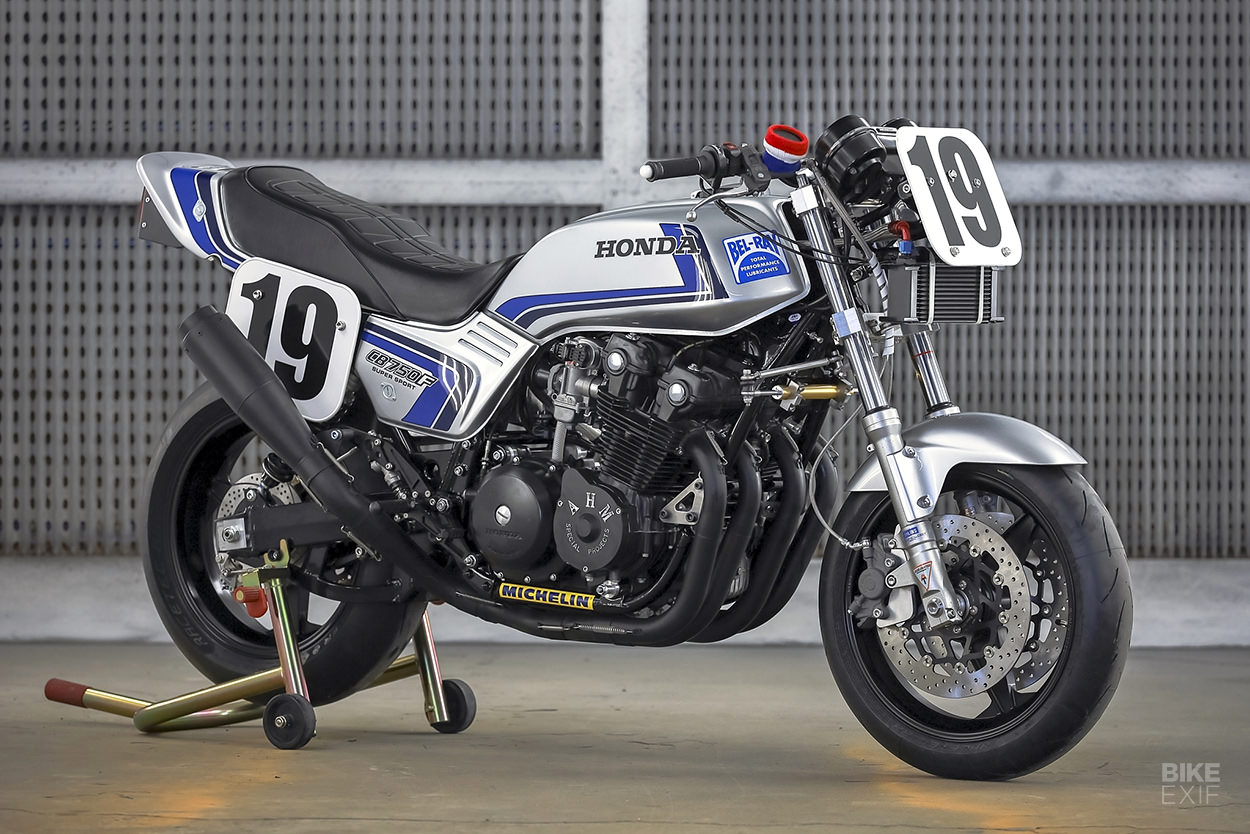 Honda CB Superbike by dB Customs Darren Begg is clearly a busy man. The ink had hardly dried on our feature of his Suzuki XR69 replica, when he bombarded our inbox with this drool-worthy homage to the 1982 Honda CB750-F.

Darren’s forte is old school superbikes, and the CB750 ranks among his favorites—so this track-specific client build got the star treatment. And although it resembles the ’82 CB750, it’s actually been pieced together from other bikes in true dB Customs fashion. 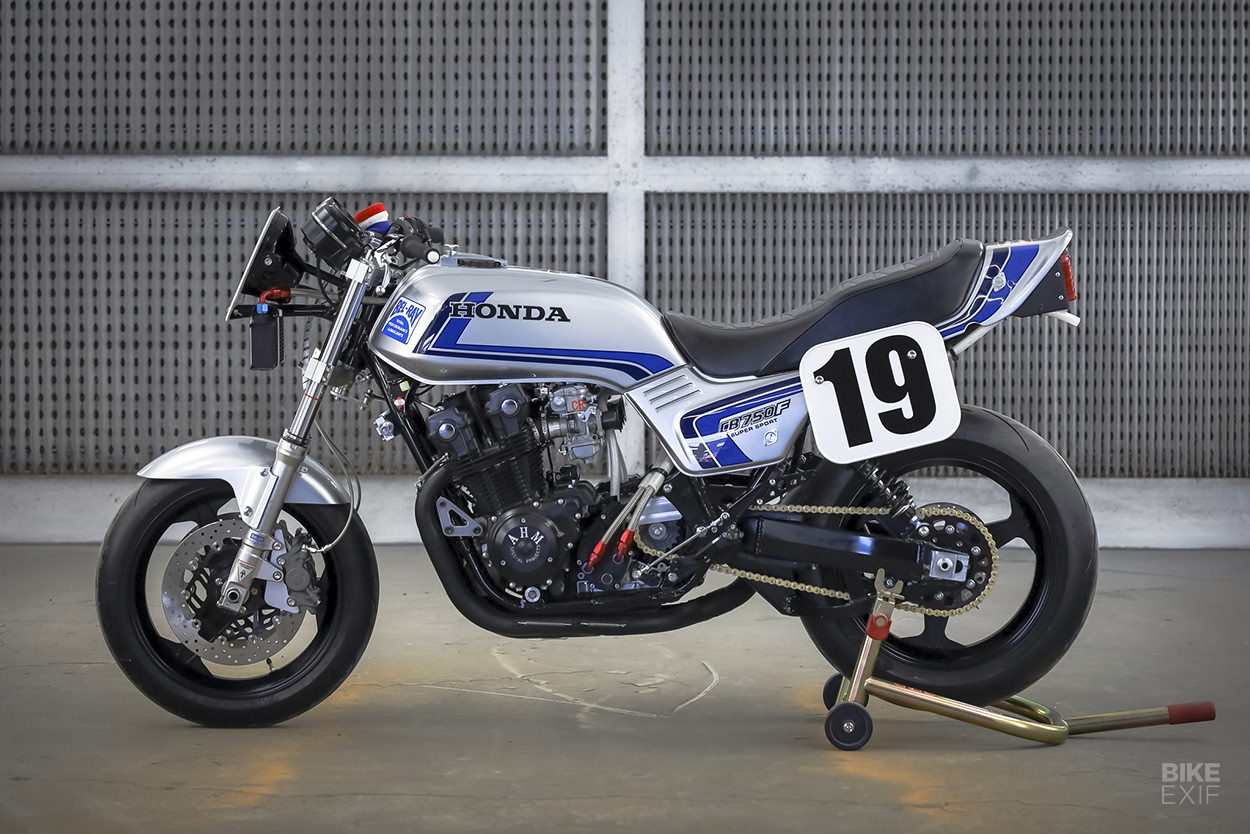 The chassis started out as a heavily modified 1982 CB900F frame, matched to a chromoly steering neck from Vince & Hyde Racing, welded in place by CMR Racing Products Inc. The subframe is a custom chromoly unit that mimics the geometry of the 80s superbike, with replica shock mounts from JES BUILT Motorcycles. A Suzuki TL1000R swingarm completes the setup—but it took some fettling to fit. 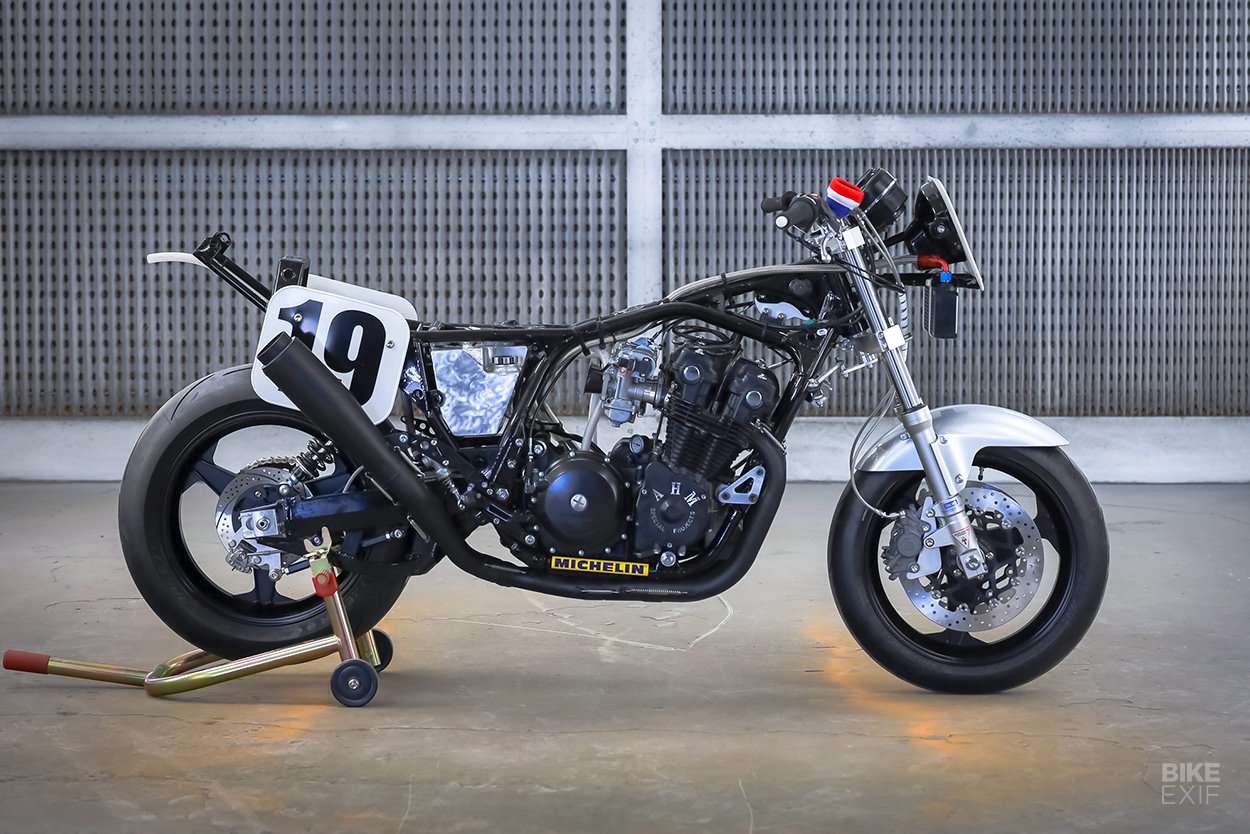 Suspension is by way of Öhlins rear shocks and Honda VTR1000F forks, with AHM replica triple clamps. The wheels are from Dymag—they’re a new billet aluminum version of their classic CH3 series carbon wheels, and were the first set to roll off the line. AP Racing calipers, Brembo front rotors and braided lines are used for the brakes.

As you’d expect, the motor deserves an entire build sheet unto itself. It’s a 1,187 cc unit with lightweight aluminum pistons from Vince & Hyde Racing, CP-Carillo rods, a balanced and lightened crank and a CB1000 transmission. Ray Mancini of Xtreme Motorsports did the boring, crank and head work, along with some other wizardry. 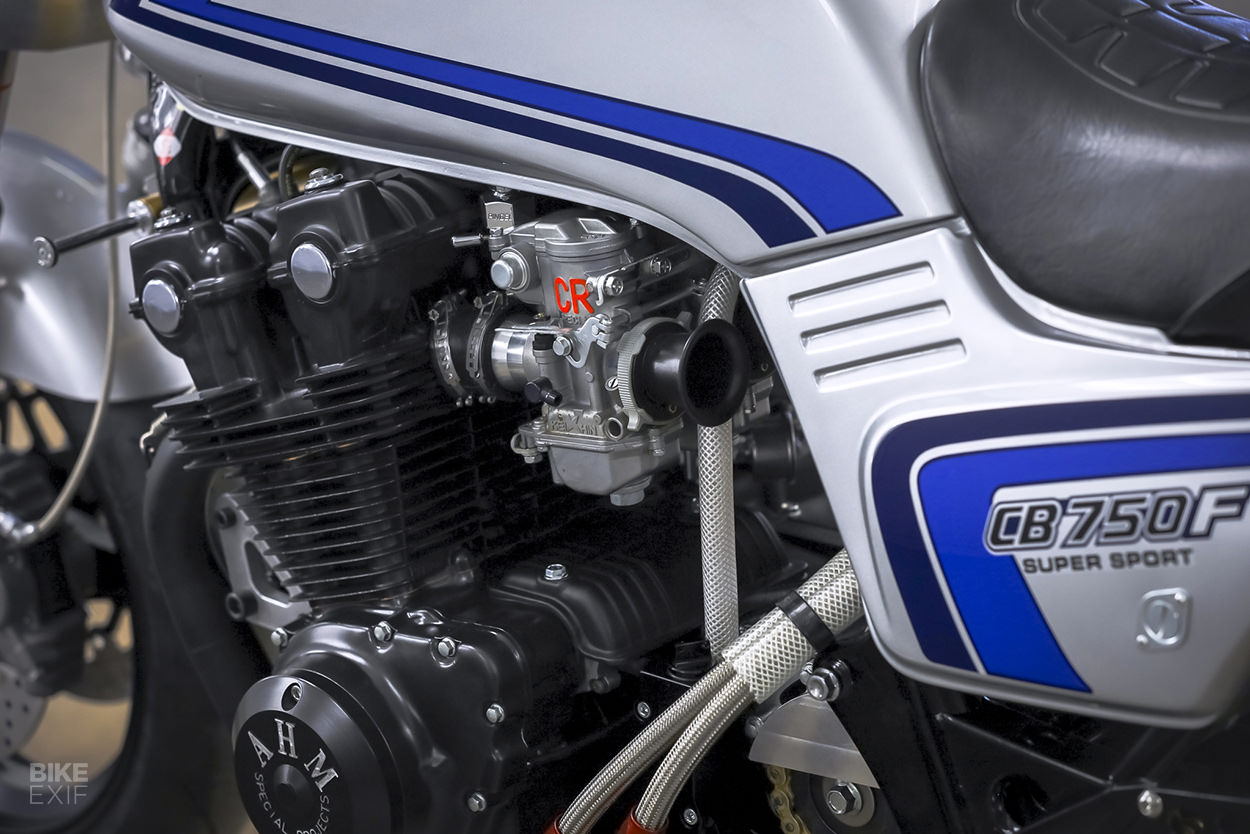 Everything from the valves to the springs, cams, chains and tensioners have been upgraded. There’s a set of Keihin carbs too, and four-into-two-into-one exhaust headers from JayGui. Dirk Langkamp fabricated the AHM replica silencer.

Darren’s listed all the work in detail on his website, and it’s well worth a read. Resplendent in a period correct paint job by Sketch’s Ink, with graphics by Mark Olan at AFE Graphics, this is one CB we’d love to ride… even if we’d be a little scared to. [dB Customs] 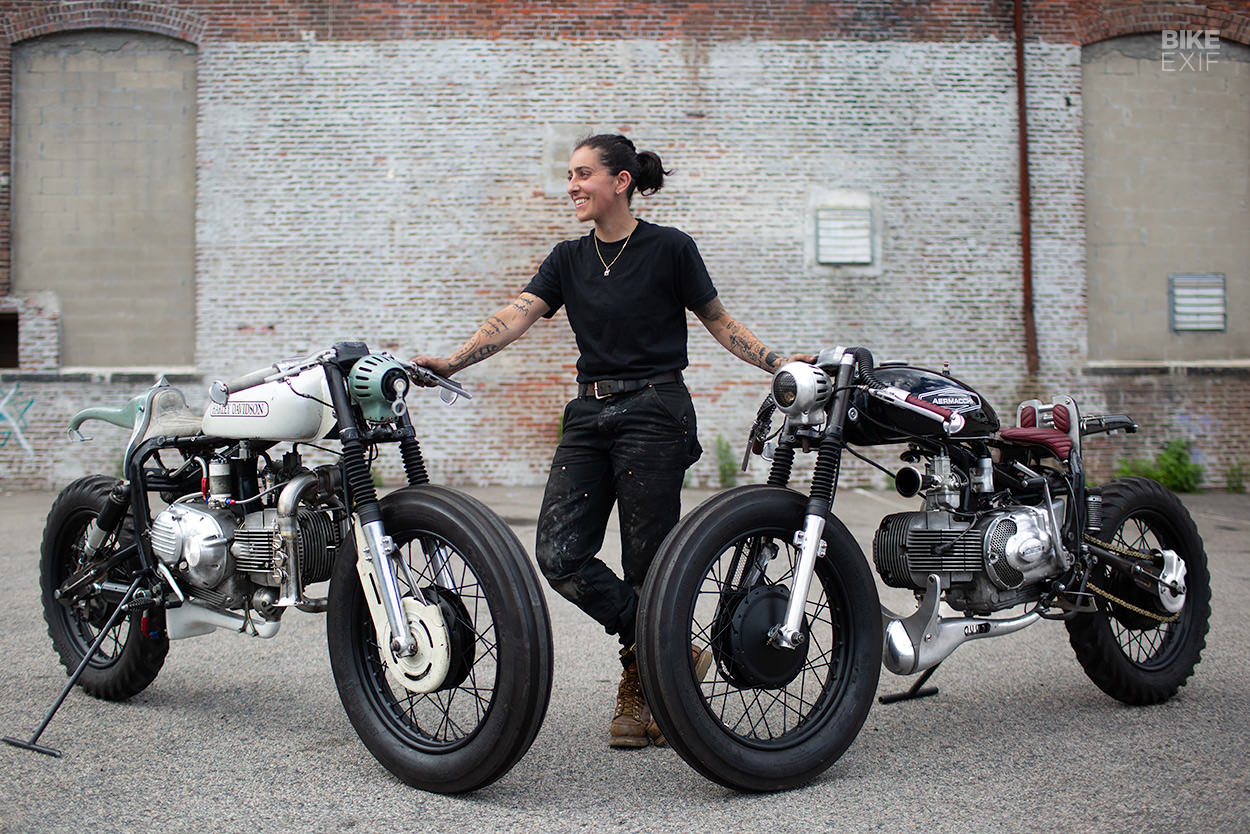 H-D Aermacchi SS350s by J. Shia The team at Madhouse Motors in Boston has their hands full with motorcycle maintenance, repair and customization, and even antique restoration. So owner J. Shia rarely has time to build anything for herself. When she does, she goes wild—tapping into her fine arts degree to build eclectic and unconventional machines. 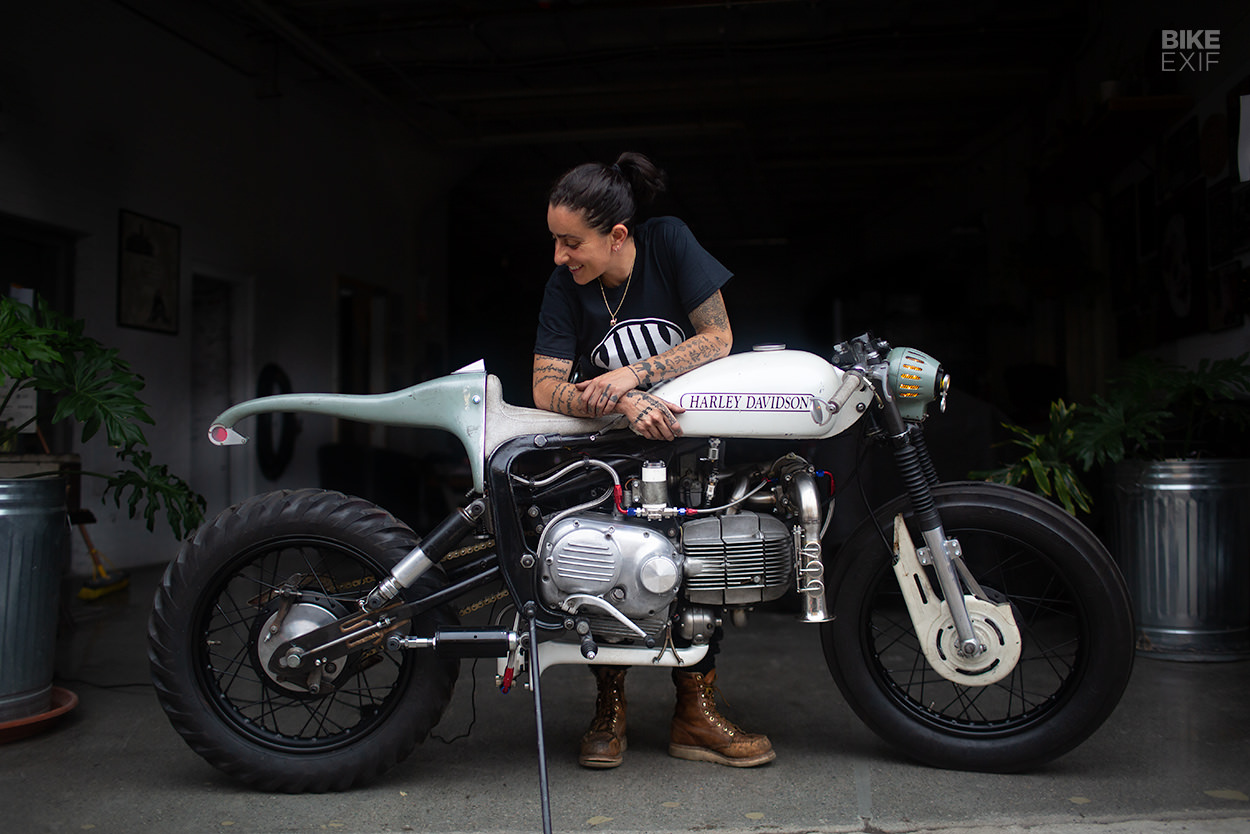 J’s latest custom project is a pair of 1972 Aermacchi SS350s, which are remarkably only a few hundred VIN numbers apart. Both were built simultaneously, and share the same stance and general silhouette. Dubbed ‘The Optical Conclusions,’ J built them as the final entry in a series of four projects, called ‘The Pareidolia Series.’

Like the previous bikes in the series, the Aermacchis are loaded with unconventional and nontraditional details, all playing on the idea of pareidolia (Google it). They also reflect and complement each other in multiple ways. 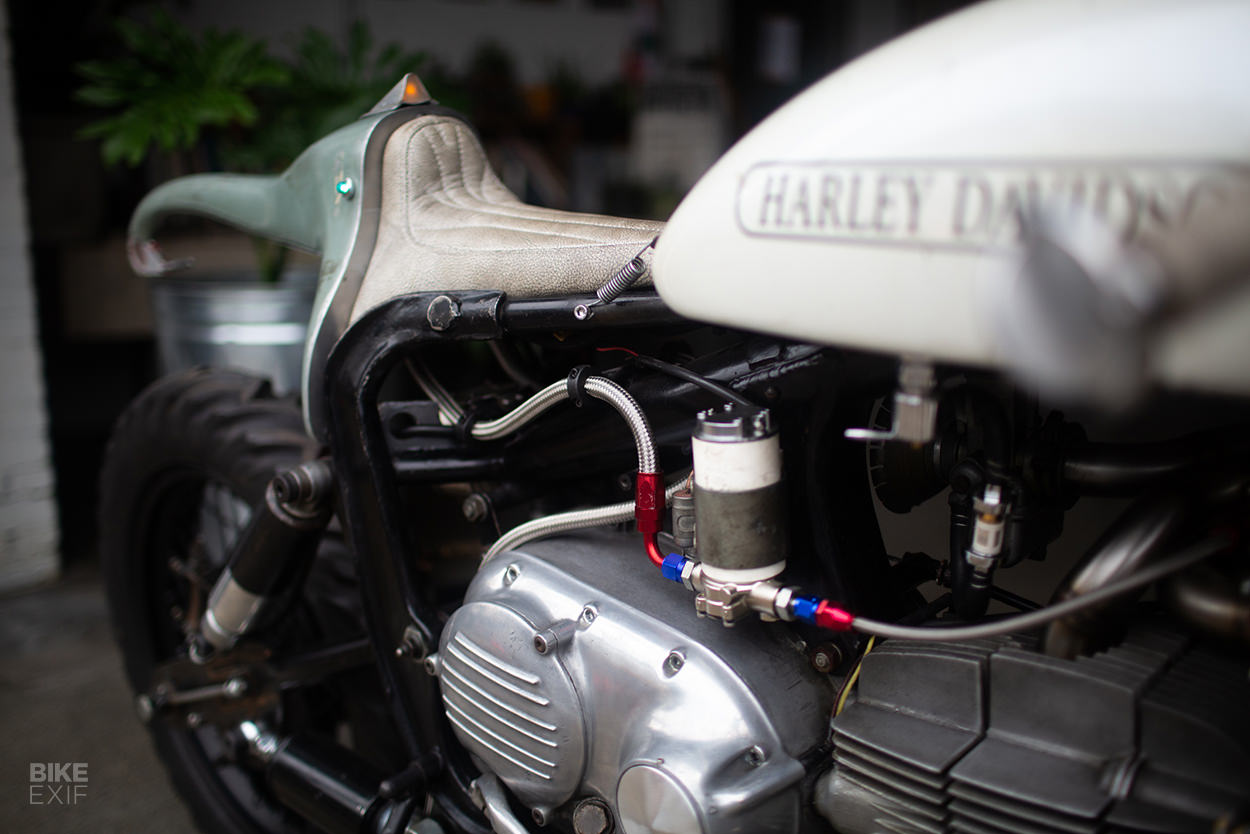 The swingarms have been stretched and fitted with single-sided suspension, using a gas tension spring and an opposing enclosed coil spring. The subframes are mirrored; the white one’s loops towards the front, and the black one’s flows to the rear. Both main frames have had their secondary down tubes removed, before being reinforced with gussets.

The white bike’s running a draw through turbo, set up with dual scavenge pumps, and oil stored in the green ‘tail’ out back. The black bike has the same part mounted under it to function as the exhaust, with a heat-shielded storage compartment built into it. And it has what J describes as “an absolutely adorable wet nitrous system.” 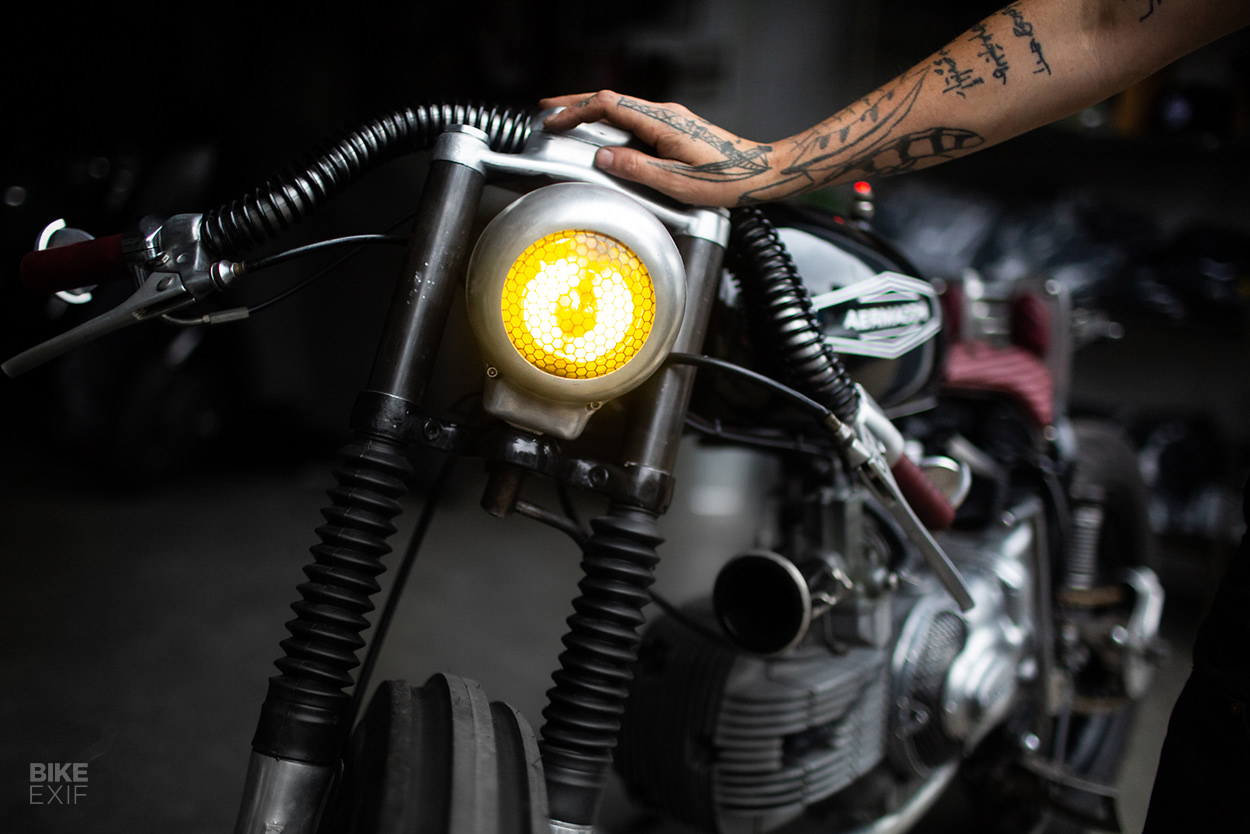 There are quirky touches everywhere, but the lighting’s particularly noteworthy. Each bike has a second wiring loom that bypasses the coils and battery, so that you can plug it into a standard outlet to operate just the headlight. So if you’re parking these in your living room (and why wouldn’t you?), they can function as lamps too. [Madhouse Motors | Images by Gretchen Devine] 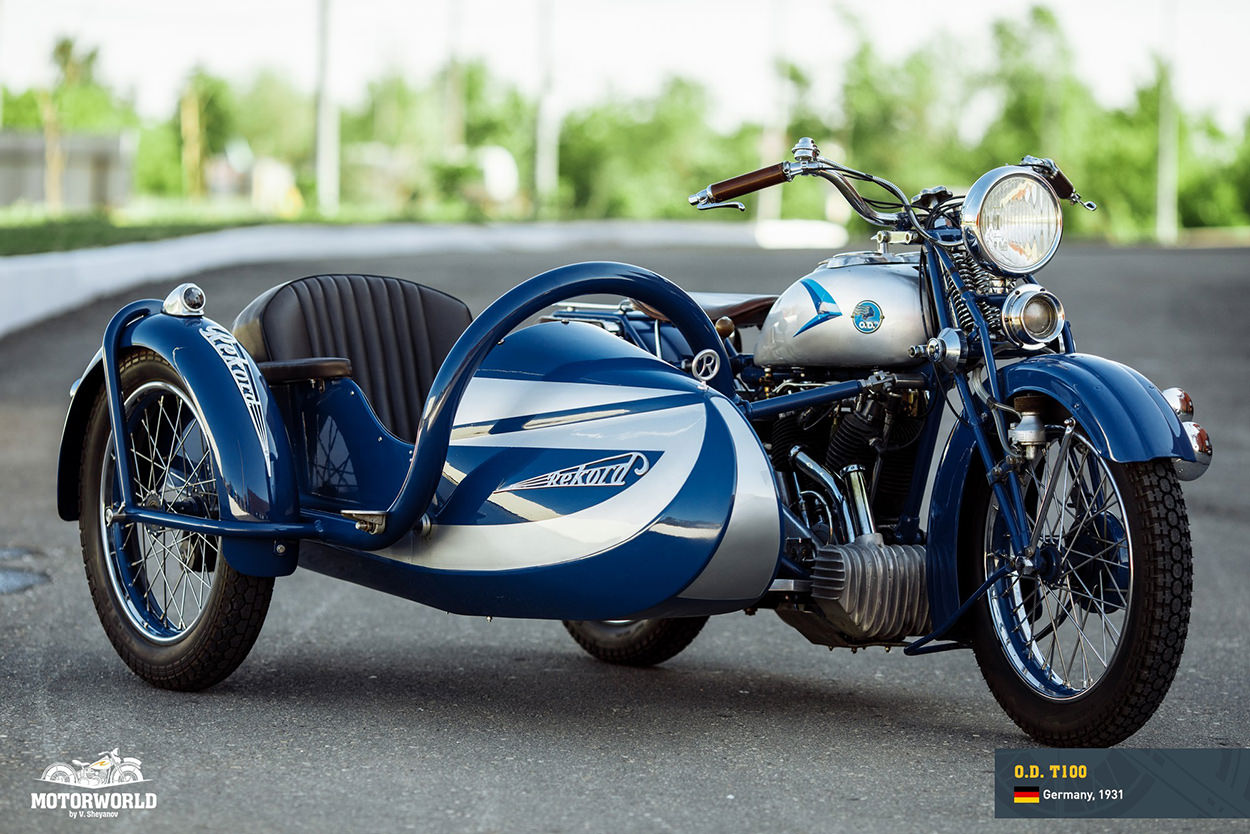 1931 O.D. T100 Motorworld by V.Sheyanov is a Russian motorcycle museum, with a knack for finding ultra-rare vintage motorcycles. So if anyone’s going to uncover a bike you’ve never heard of, it’s them. Meet the rather handsome O.D. T100.

The story goes that brothers Willy and Carl Ostner, who already had a company called Ostner & Co., decided to start manufacturing motorcycles in 1927. The brand eventually became known as O.D. Werk Willy Ostner—the O.D. standing for Ostner Dresden (which is where they were based). 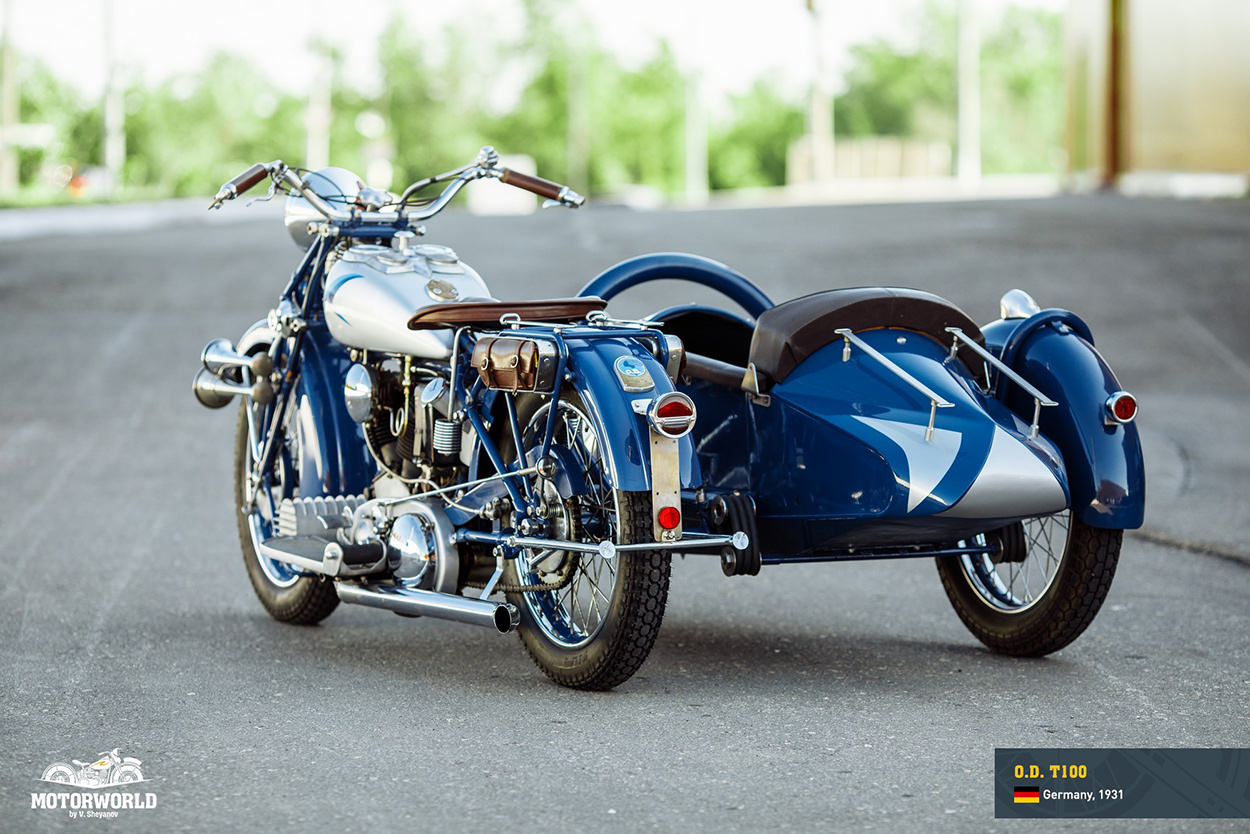 The Ostner bros. prided themselves on building high-quality machines with chassis that they built themselves. The first O.D. bikes were singles, but in 1929 they debuted their flagship T100. It was a big deal at the time, with a 986cc v-twin engine from the Swiss company Motosacoche, who sold their engines to various motorcycle companies under the brand MAG.

Packaged in a tubular frame with a parallelogram fork and no rear suspension, the O.D. T100 was good for an eye-popping 22 horsepower—but at least the motor was known to be reliable. It used a three-speed transmission from Hurth, with a chain drive in an aluminum housing sending power to the wheel. 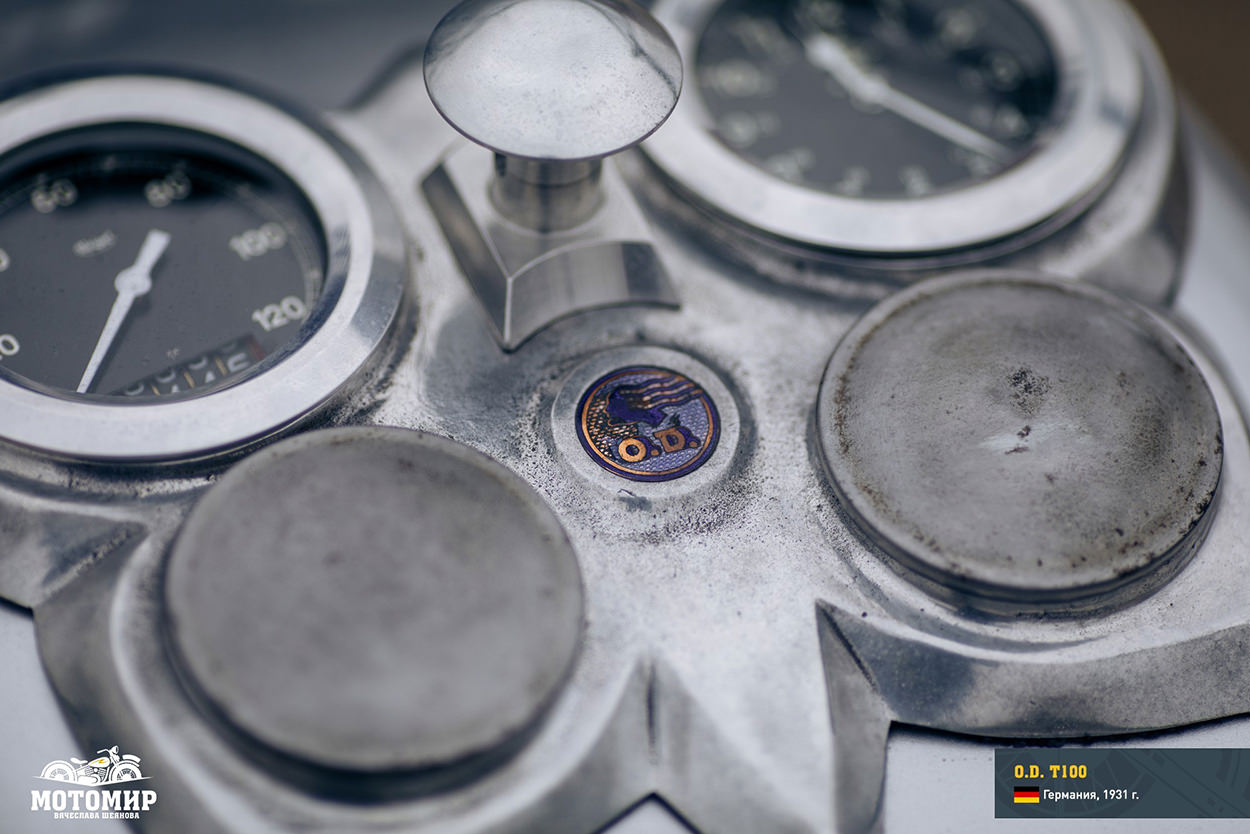 On top of the fuel tank was a stylish dash with its own lighting a speedo, a clock, and fuel and oil gauges.

O.D. eventually gave up on motorcycles and started building light trucks instead, and more’s the pity. The T100 is stunning, shown here with a sidecar of undetermined origin. Who knows what the company would be doing now if they were still around? [More] 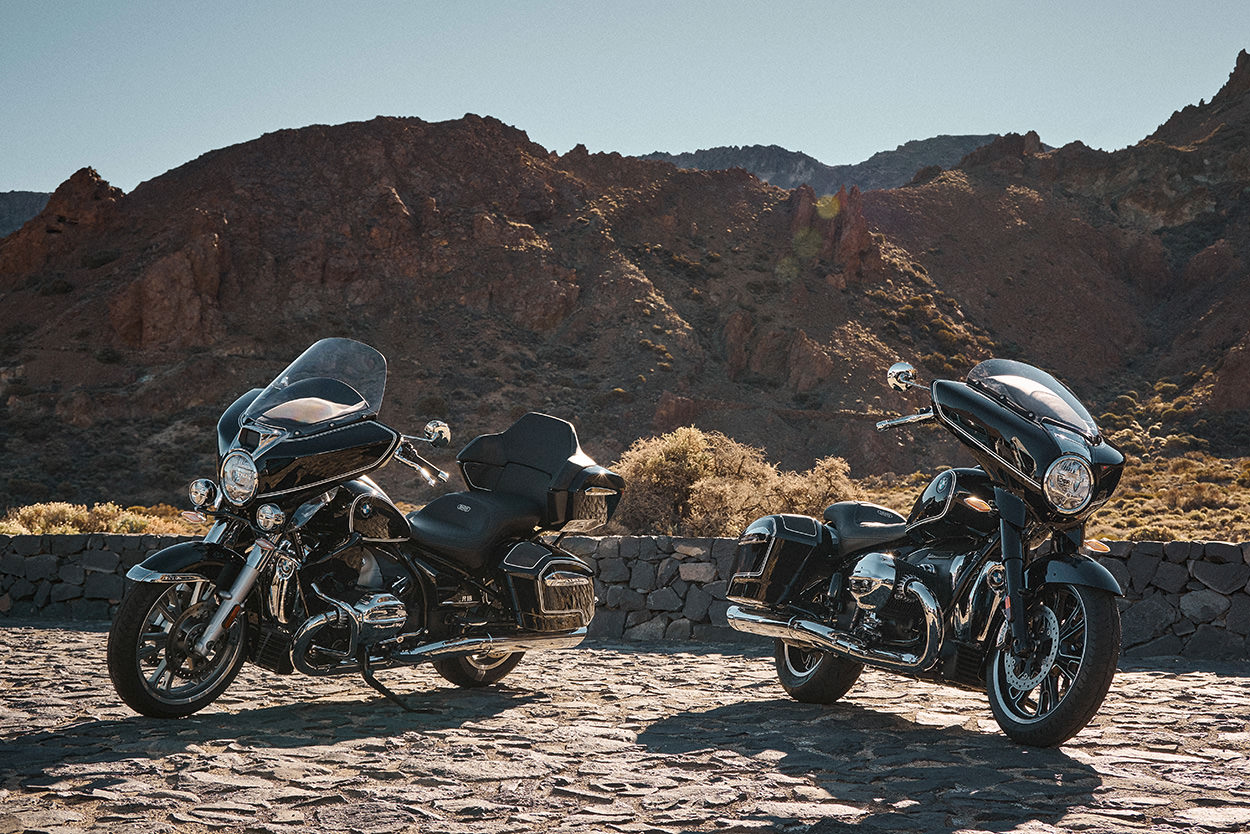 BMW R18 Transcontinental and R18 B We don’t usually go in for tourers and baggers around here, but this news from BMW Motorrad this week made our ears prick up. With the R18 Transcontinental and R18 B, it’s clear that BMW is gunning for a piece of Harley-Davidson’s pie (as if there was any doubt). But the surprise here is that both bikes look really good for what they are—as if this is what BMW’s mammoth retro boxer was always intended for. 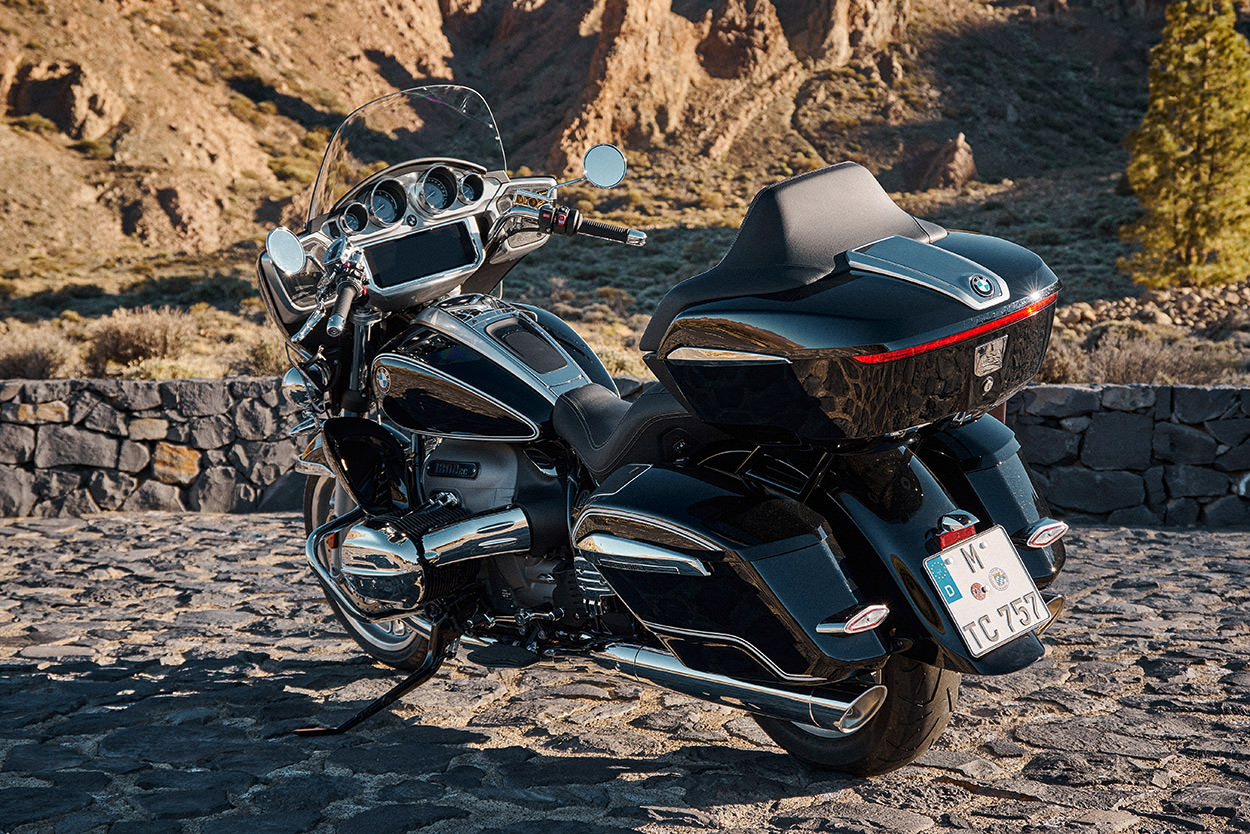 Both new models use the existing BMW R18 chassis and motor, and add fairings, hard panniers and more comfortable two-up seating. The Transcontinental [above] is pitched as a tourer, with a taller screen, additional wind deflectors and a top case with a generous passenger backrest.

The B-model [below] is pitched as a slightly pared-back bagger, with a shorter screen, a trimmed seat and no top case. 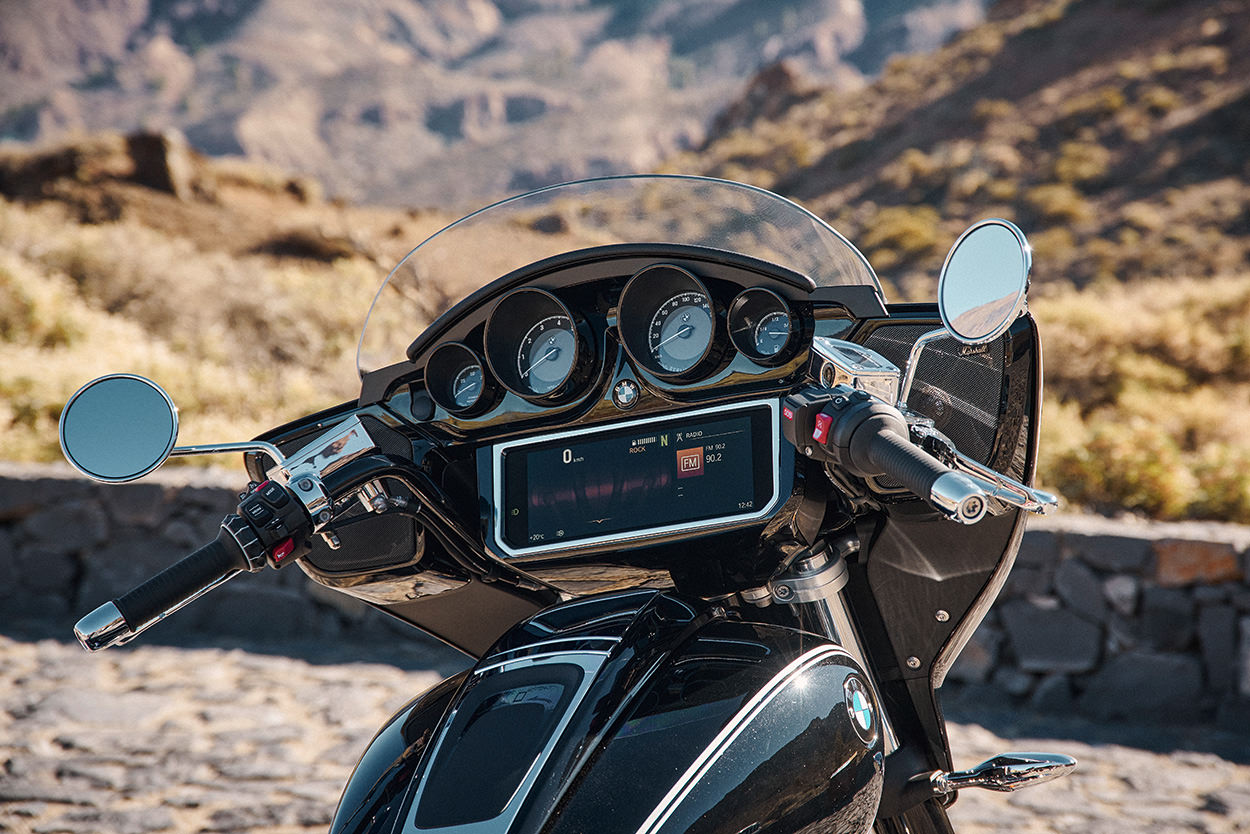 Both bikes also feature a row of analog dials behind their fairings, along with a massive 10.25” TFT display with full Bluetooth connectivity. And in true American touring motorcycle form, a built-in sound system is part of the package.

BMW partnered with Marshall Amplification here; a curious move from the British company, and their first foray into the moto industry. The two announced the partnership via a music video from the Southern rock band, The Cadillac Three—which, depending on your perspective is either a great piece of marketing, or hopelessly off the mark. 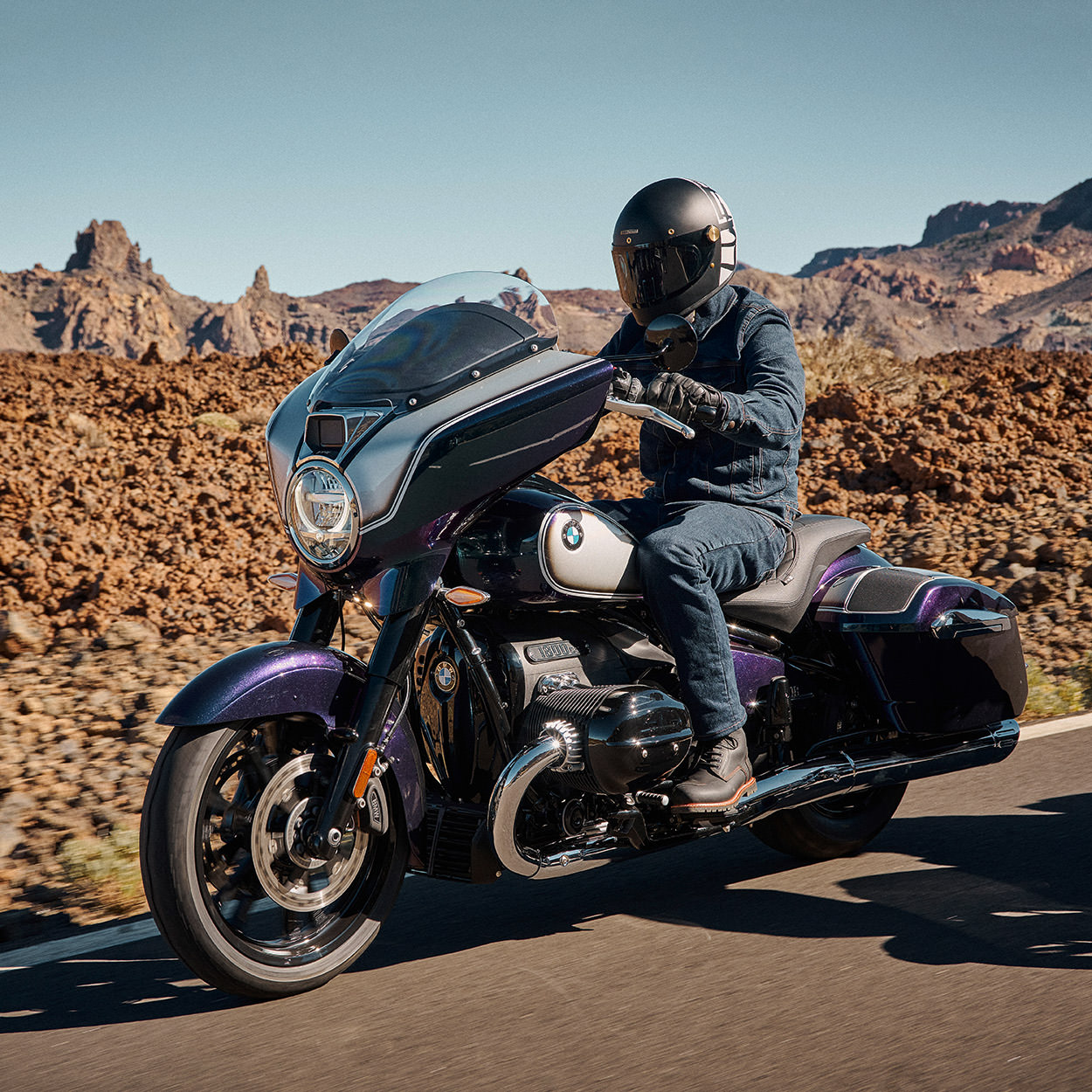 Both bikes will come in BMW’s ‘First Edition’ black with white pinstripes, and in an ‘Option 719’ galaxy-themed flip-flop paint job [above].

Touring style aside, we wouldn’t mind having a go on these—our biggest gripe with the R18 was its ergonomics, and the comfier seats and additional wind protection might help here. [BMW R18 Transcontinental | R18 B] 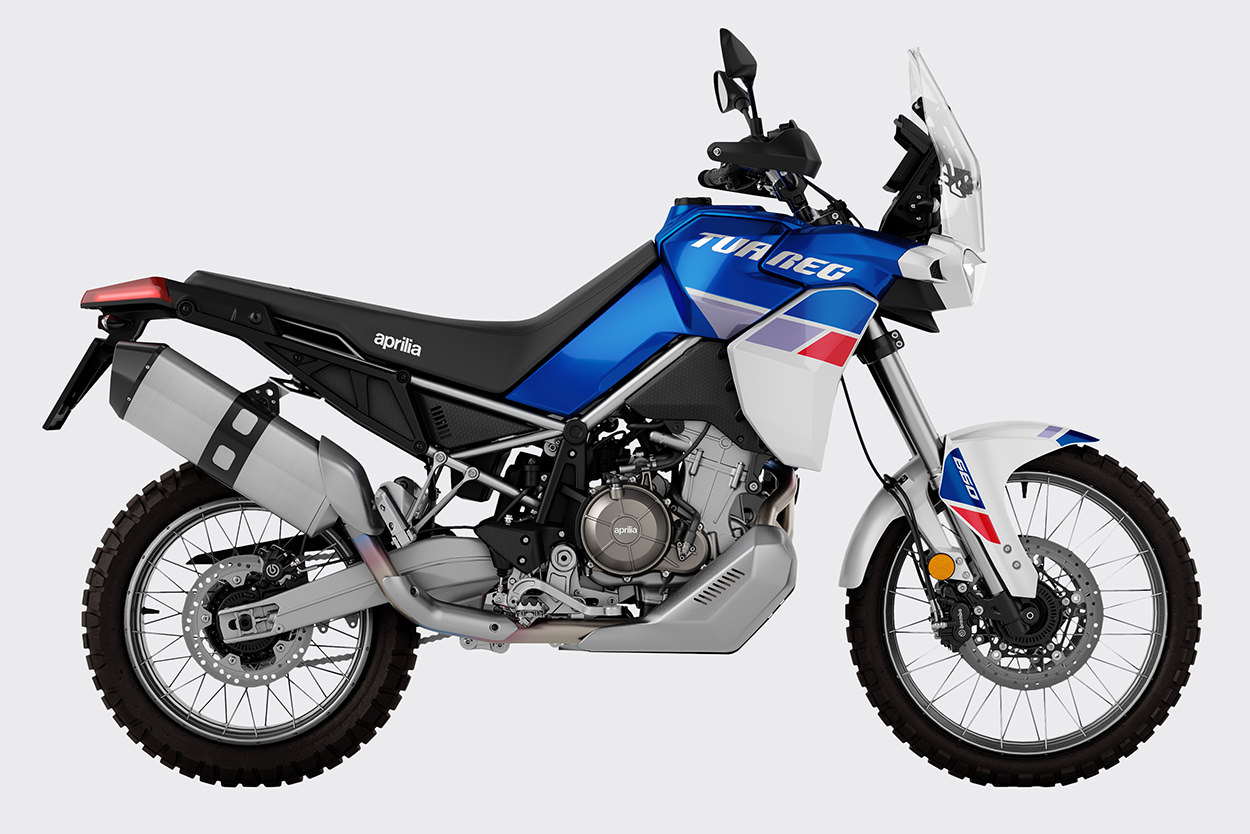 Aprilia Tuareg 660 More OEM news, as Aprilia give us a first taste of their long-awaited Tuareg 660 dual sport. All we get for now are renders and some basic specs—but so far, we’re into it.

The Tuareg will use a redesigned version of the parallel twin motor in the Aprilia RS 660, tuned to 80 hp and 70 Nm. It’ll get a full complement of electronic aids too, including switchable ABS and various rider modes, with a 5” TFT display. Aprilia are also listing a dry weight of 187 kilos [412 pounds], 240 mm of suspension travel, more than 240 mm of ground clearance, and a seat height of less than 860 mm. 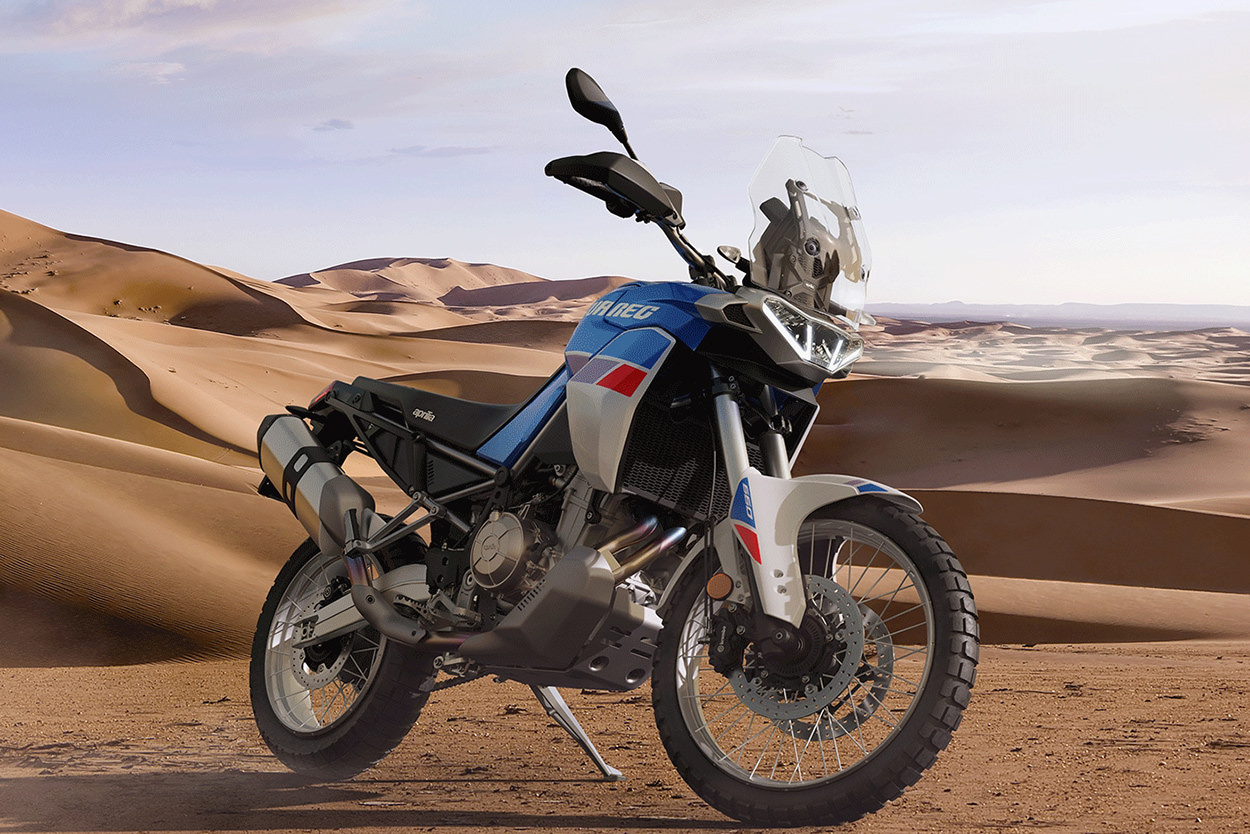 Most importantly, the Tuareg 660 concept is really good looking, with hints of the 1994 Aprilia Tuareg and a similar vibe to Yamaha’s T7. It looks lean, aggressive and devoid of too many layers of plastic, and we’re digging the bold new graphics. Adventure bikes might not be our staple, but we’re keen to swing a leg over this one. [Aprilia Tuareg 660]