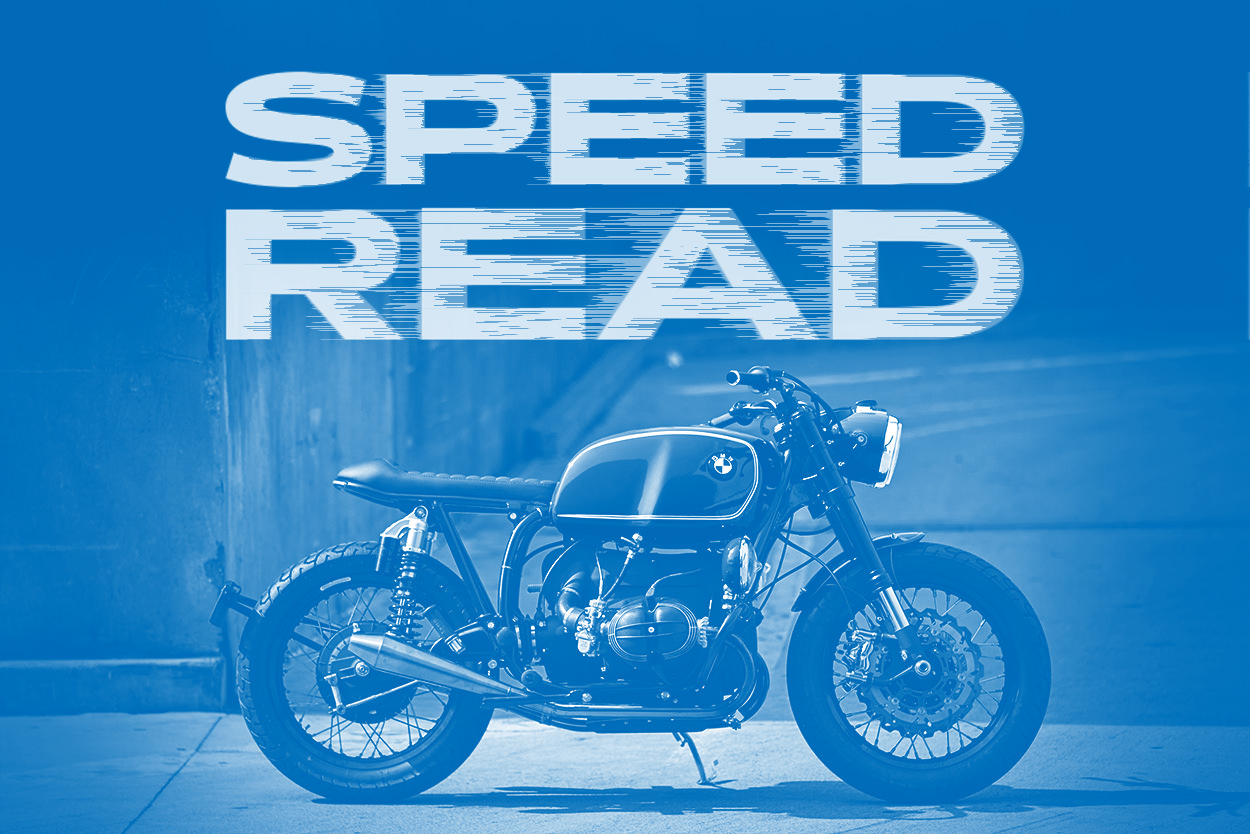 We’ve found something for everyone this week in our travels around the web. We’ve got an XT600 from the Netherlands, a Honda 599 from Bulgaria, and a revitalized Vespa from Chicago. Plus a stunning BMW finished in Porsche’s classic Olive paint, from Roughchild of Los Angeles. Enjoy. 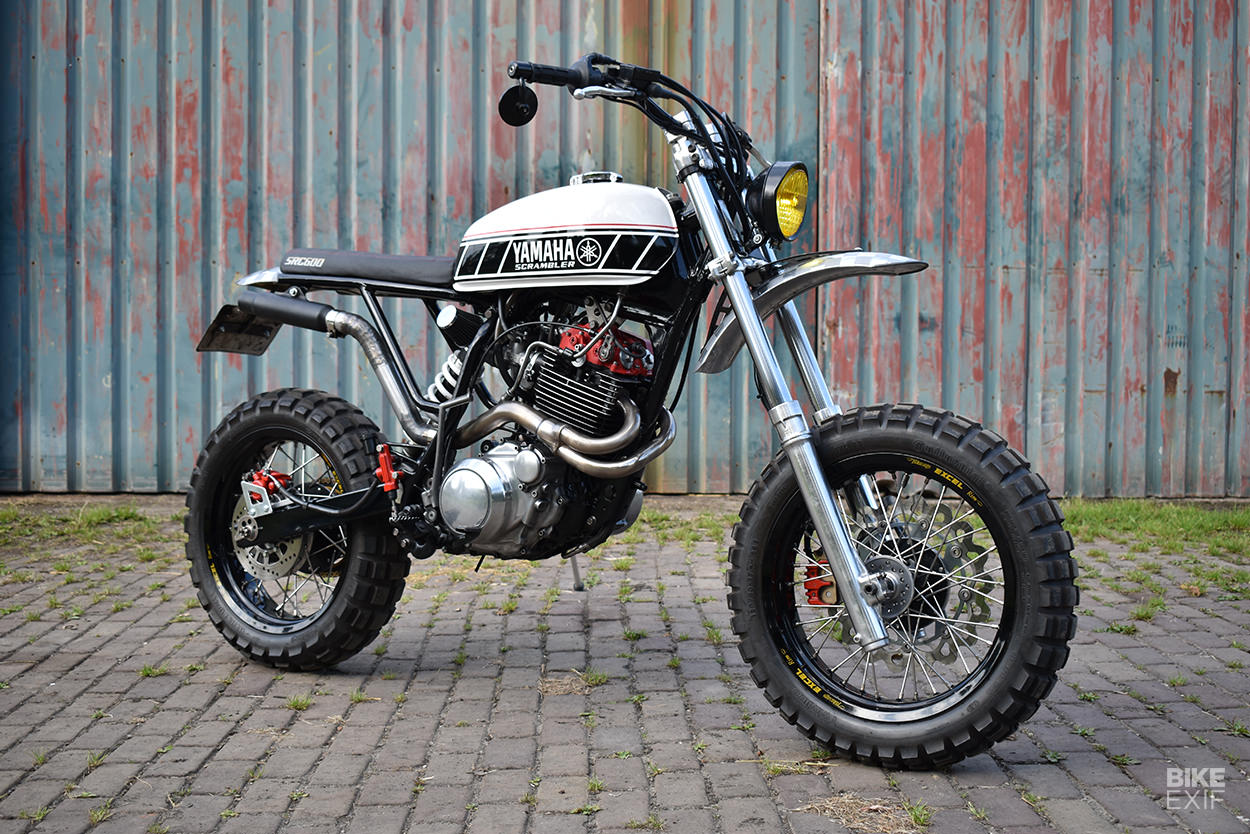 Yamaha XT600 scrambler by Remco Witkamp In his youth, Dutchman Remco Witkamp built ‘cross mopeds’ and graduated to riding motocross bikes in competitions. A few years ago, he saw a photo of a scrambler and got bitten by the bug again. “I found a secondhand XT600 for sale, which is a good donor bike in my opinion,” he tells us. “I bought it—it was not running—and took it apart.” 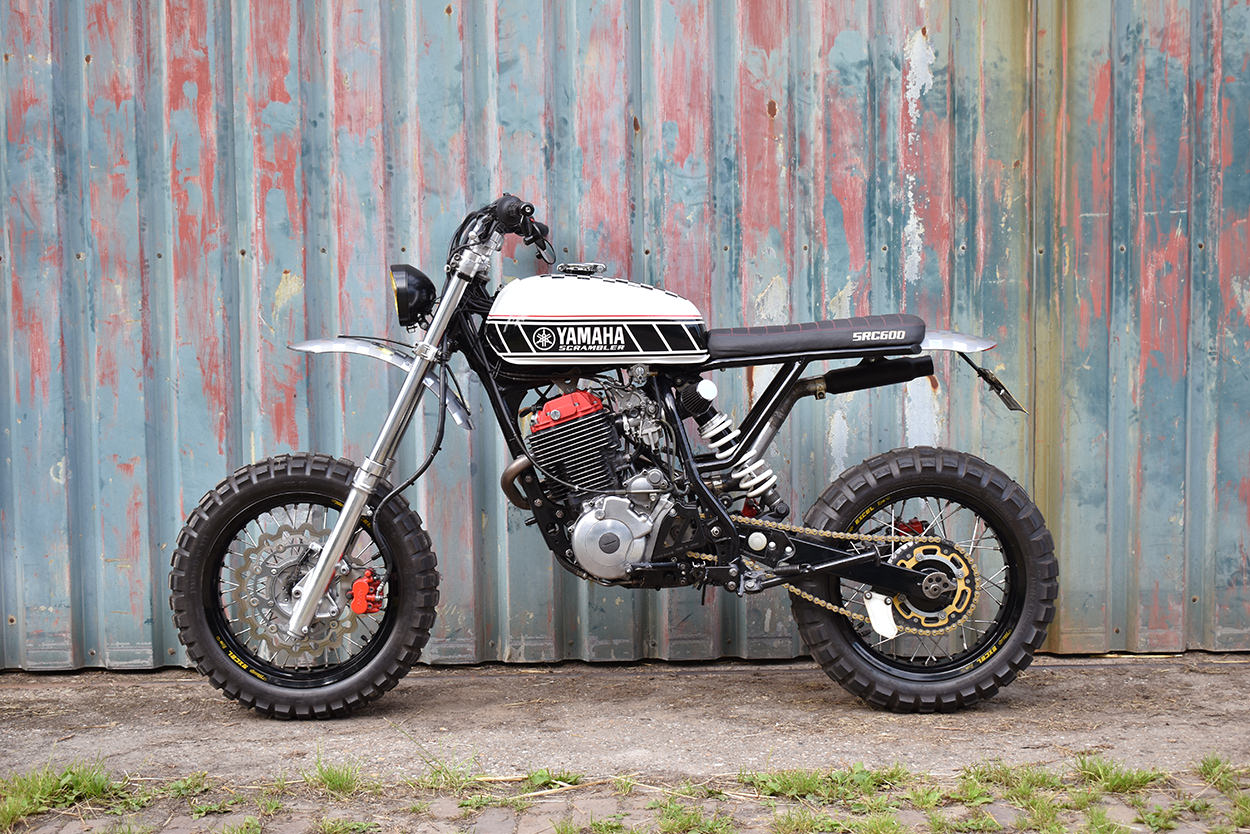 One thing led to another, as often happens in our field. Remco ended up building a new rear frame, and after bolting it back onto the main frame, sent the whole lot (plus swingarm) off for a fresh coat of powder.

A fuel tank from a 1978 Suzuki GT250 now sits on top. “I found it on the internet, and had to modify it a little to make it fit the frame. In the 90s I painted motocross helmets with my own designs, so I used that experience to paint the tank. The sides are recognizable from the early days of Yamaha.” 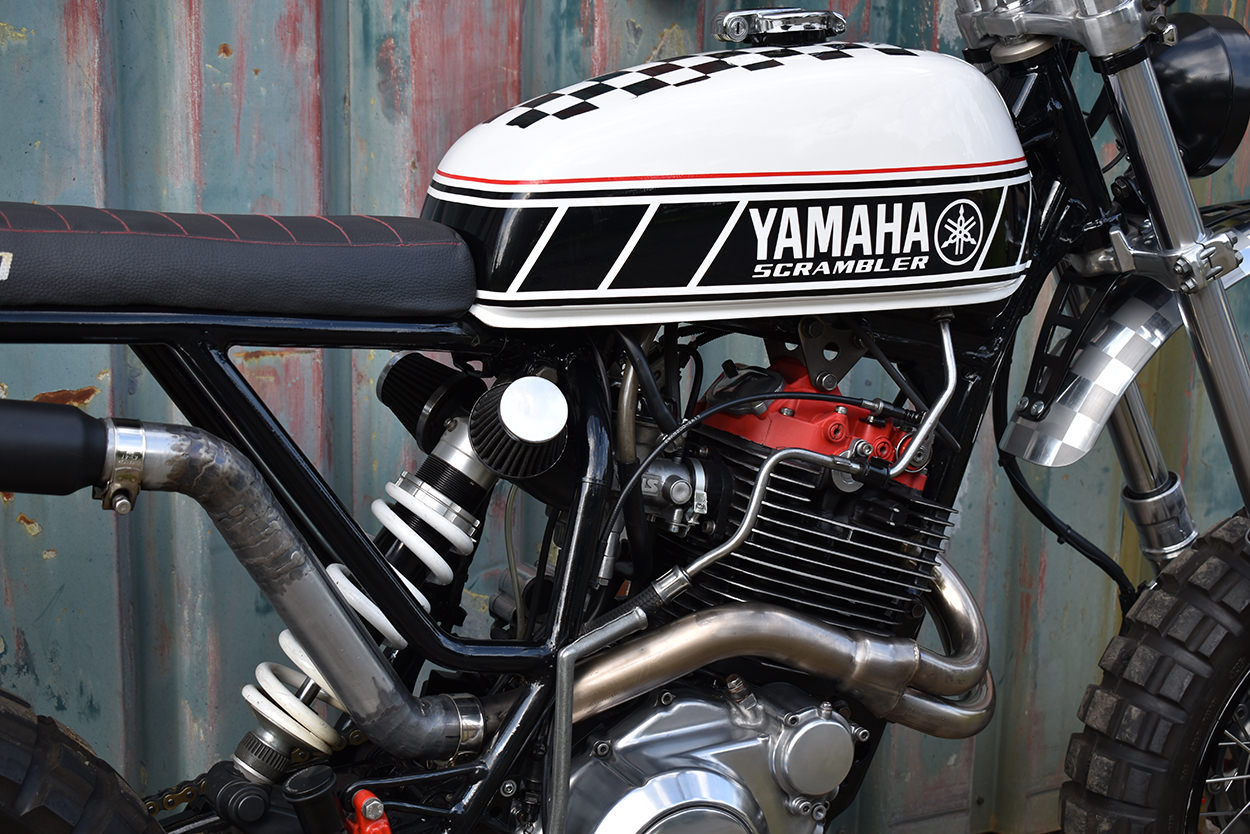 Remco has raised the stance of the XT600 slightly by installing WP springs in the refurbished forks, and a one inch longer than stock WP monoshock at the back. The suspension is hooked up to 17″ Excel Takasago wheels to reduce unsprung weight, along with a Galfer rotor at the front and Continental TKC80 rubber.

ProTaper bars are clamped onto Trail Tech risers, and there’s a compact Sigma MC 1812 digital display to replace the factory instrumentation. A tiny Ultrabatt multiMIGHTY battery supplies juice for the LED lighting, via a new loom. 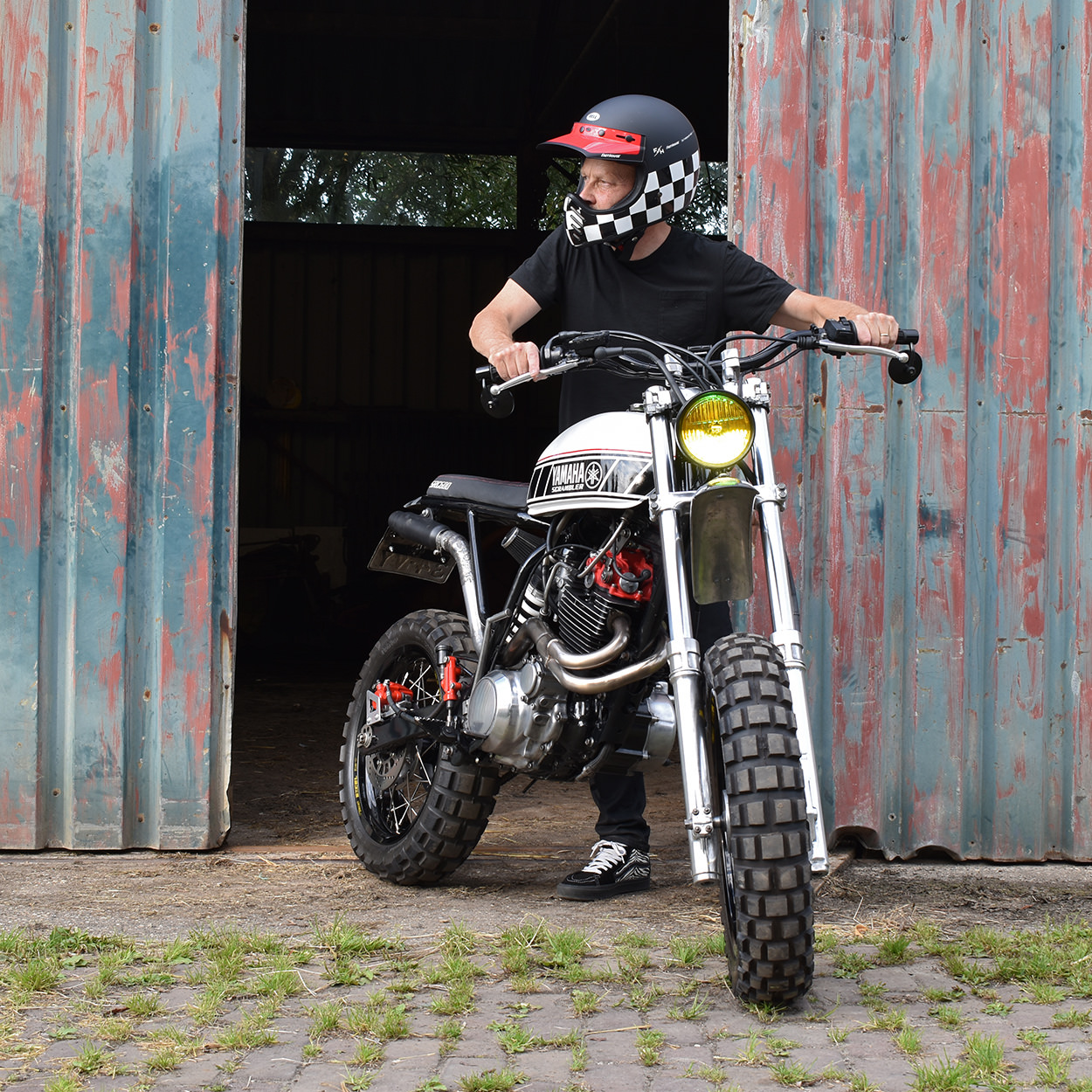 Remco’s called his build ‘Scrambler Road Cross 600’ and it looks like brilliant fun to ride, both on- and off-road. Goed werk! 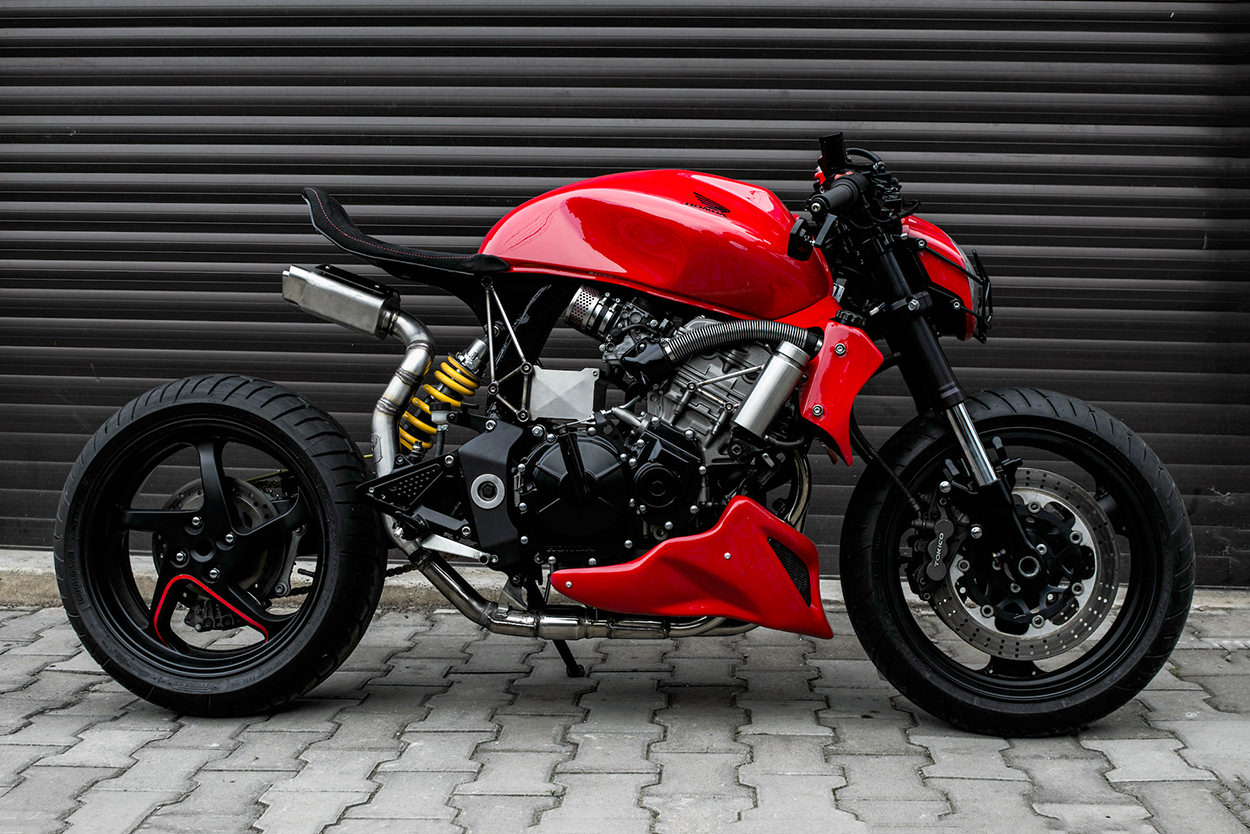 Honda Hornet by Bull Moto Custom The Hornet is one of the most underrated platforms for customization. Known as the 599 in the States, it’s got an absolute peach of an engine: an inline four that revs to the heavens and pumps out around 97 hp. That’s plenty enough for a bike that weighs around 400 pounds dry, and the suspension is capable of the odd track day too.

The styling is less than exciting though, and that’s where Ivan Mushev of the Bulgarian shop Bull Moto Custom comes in. 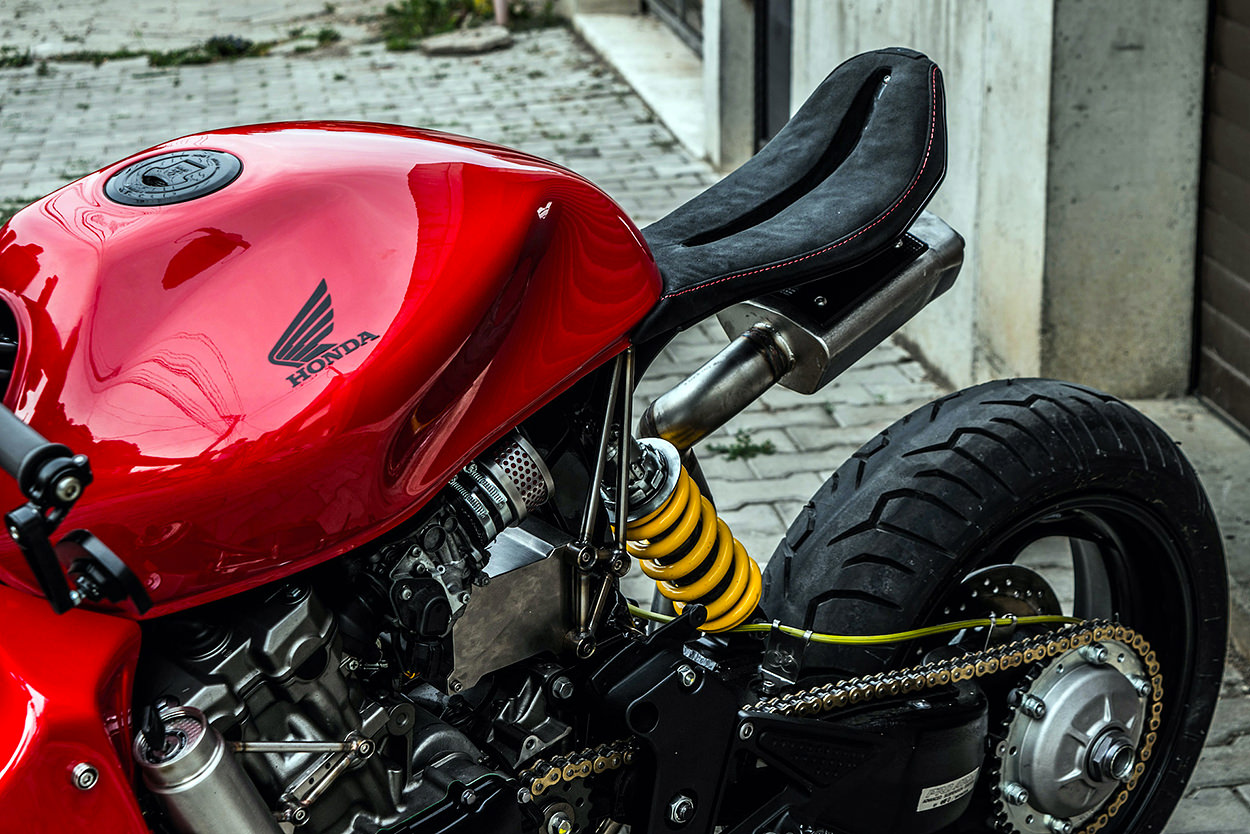 The trickiest job was fitting a VFR single-sided swingarm, with a wheel from the same donor bike. The new rear subframe showcases the new setup, with a stubby but supportive bobber-style seat unit that incorporates street-legal LED lighting.

The front end is from a Kawasaki ZX9R, complete with wheel and brakes. It’s matched to new clipons, with a Koso speedo keeping the bar area clean and an LSL headlight (with custom grille) to ramp up the aggressive look. 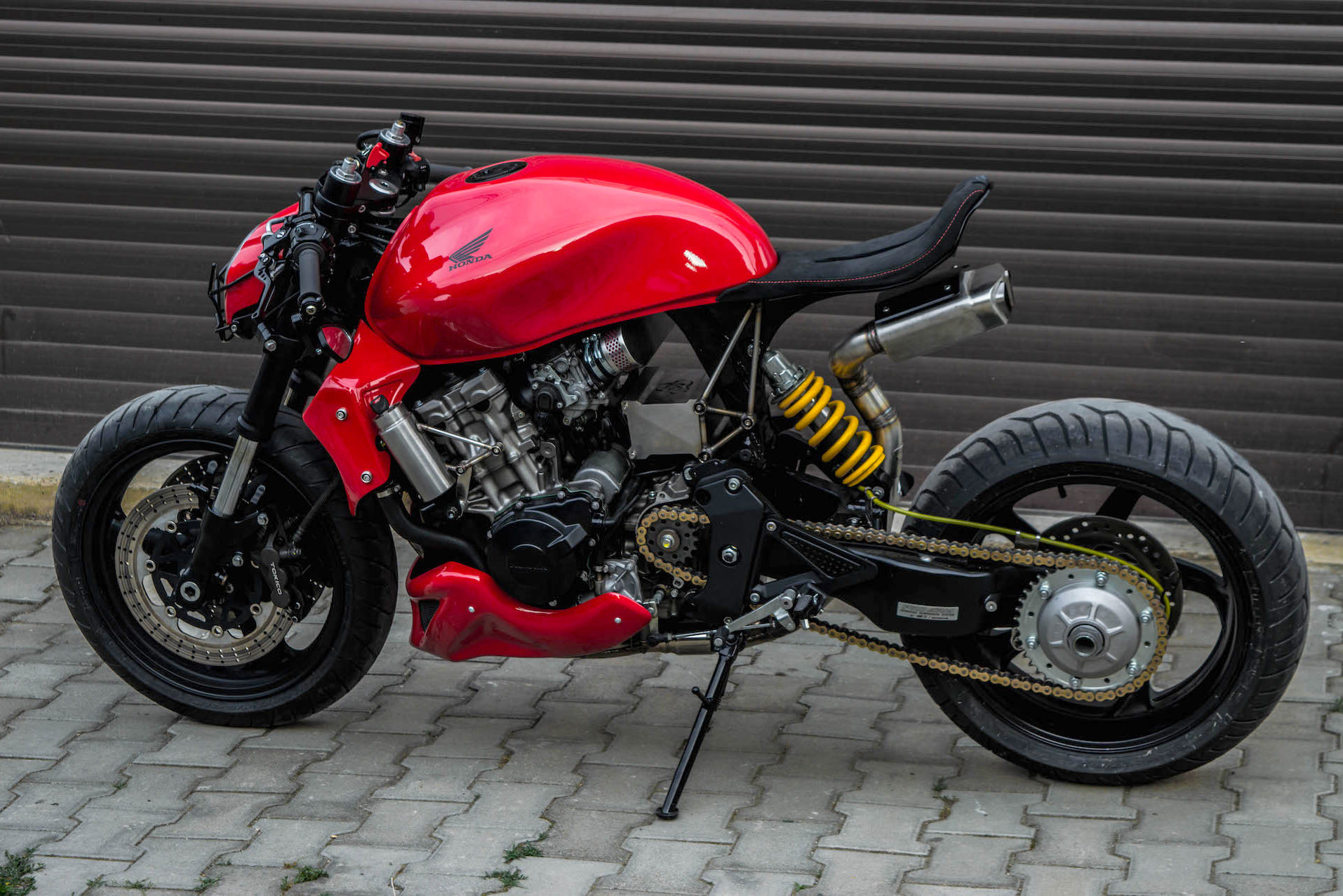 New bodywork includes the headlamp nacelle, radiator covers and a belly pan. Finished in Audi’s Misano red pearl color, the fresh fiberglass gives the Hornet something of a K-Speed vibe.

It’s hardly subtle, but Bull Moto have undeniable skills—and anything that gets the Hornet into the limelight gets a tick from us. [Via] 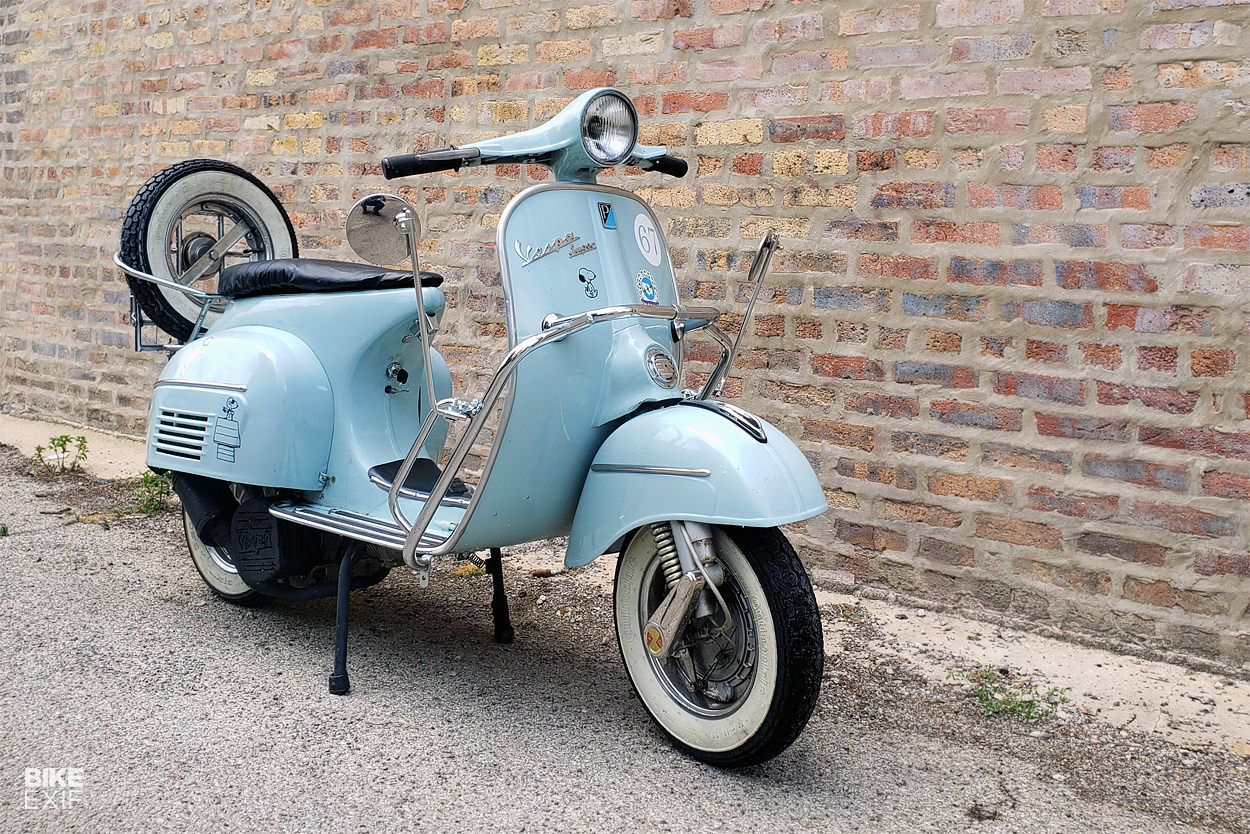 Vespa Restomoderna by Dark Cloud Fabrication I have fond memories of tooling around Sydney, Australia on a Vespa a few years ago, so this discreet but clever restoration caught my eye. It’s by Chicagoan Shaun Millard, who has revived a 1967 Vespa Super 150 by replacing the drivetrain with a GY6 motor and automatic gearbox.

Shaun has been a diesel mechanic, machinist and fabricator for 16 years, so he knows his way around a workshop. He built this Vespa for his wife, who was glad to see the four-speed grip shift replaced with a more modern transmission.

The ubiquitous 150cc GY6 four-stroke is often used for Honda Ruckus engine swaps, but took some wrestling to make it fit the Vespa. It offers a useful power increase though, almost doubling the 5 hp of the original two-stroke. “I had to machine a custom spacer to get the rear wheel to fit in the fender, and cut a tunnel out of the underside of the body in order to accept the new motor,” says Shaun.

Shaun has restored the body, fabricated a new seat pan, and lowered the stance slightly with the help of a new YSS shock (and custom mount). He’s also rewired the scoot, installed an electric start, and built a custom exhaust that provides a low growl. 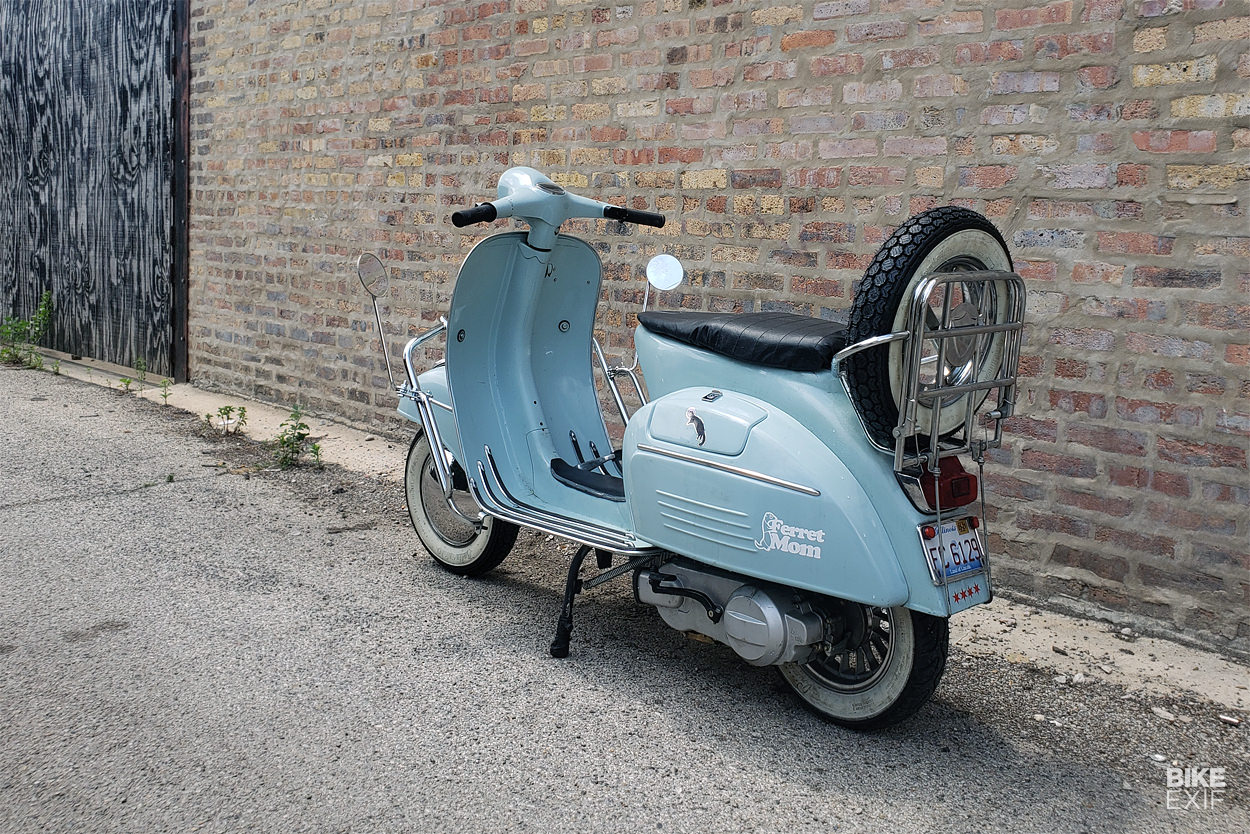 To the casual onlooker, however, the Vespa looks pretty much the same as it did when it left the factory over half a century ago. It’s still sporting the factory paint, plus the classic white wall tires popular in the 60s.

It’s certainly no match for the high-tech urban scooters of today, but we’d take this one for a blast around the city every time. [Dark Cloud Fabrication] 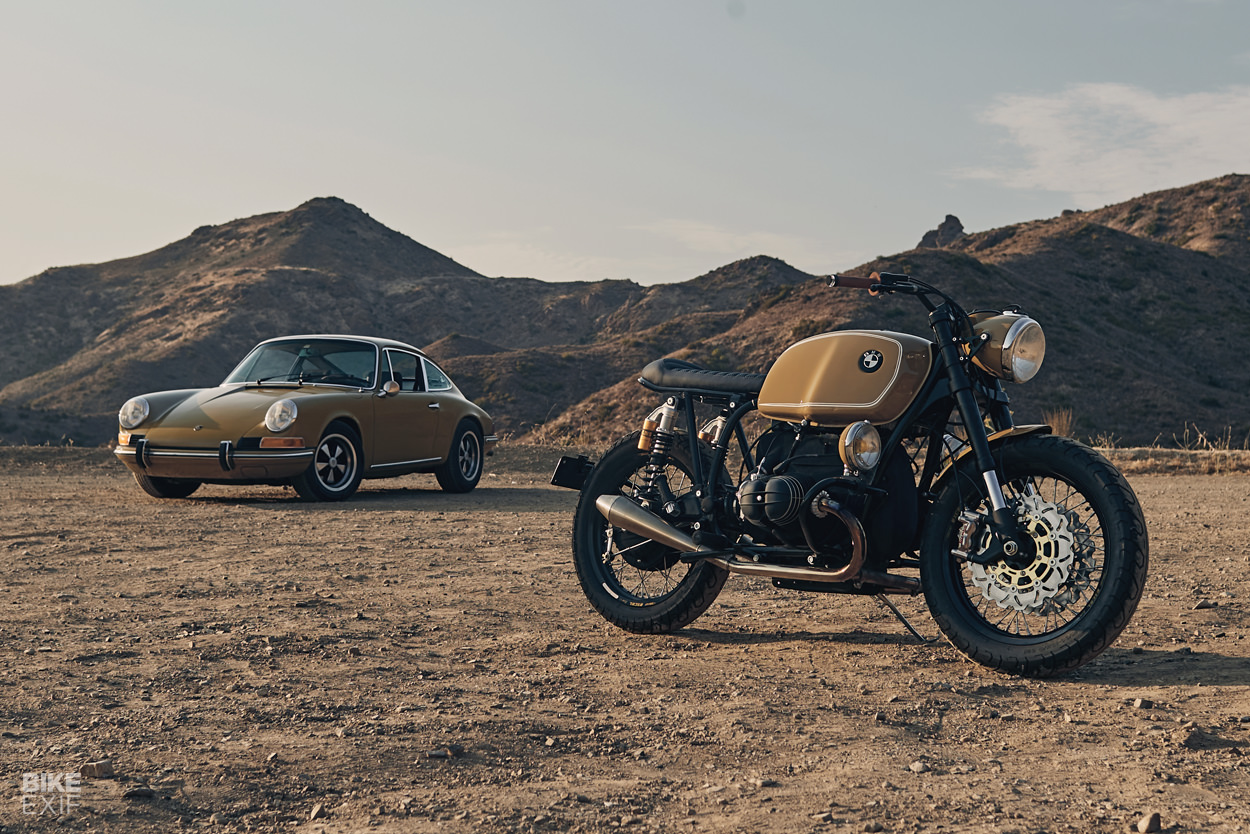 BMW R75 ‘Olive’ by Roughchild It takes real skill to build an interesting airhead these days, and Roughchild make the grade. We ran a full feature on the first ‘Reisesport Short Wheel Base’ from the Los Angeles outfit a couple of months ago, but we like this new build even better. 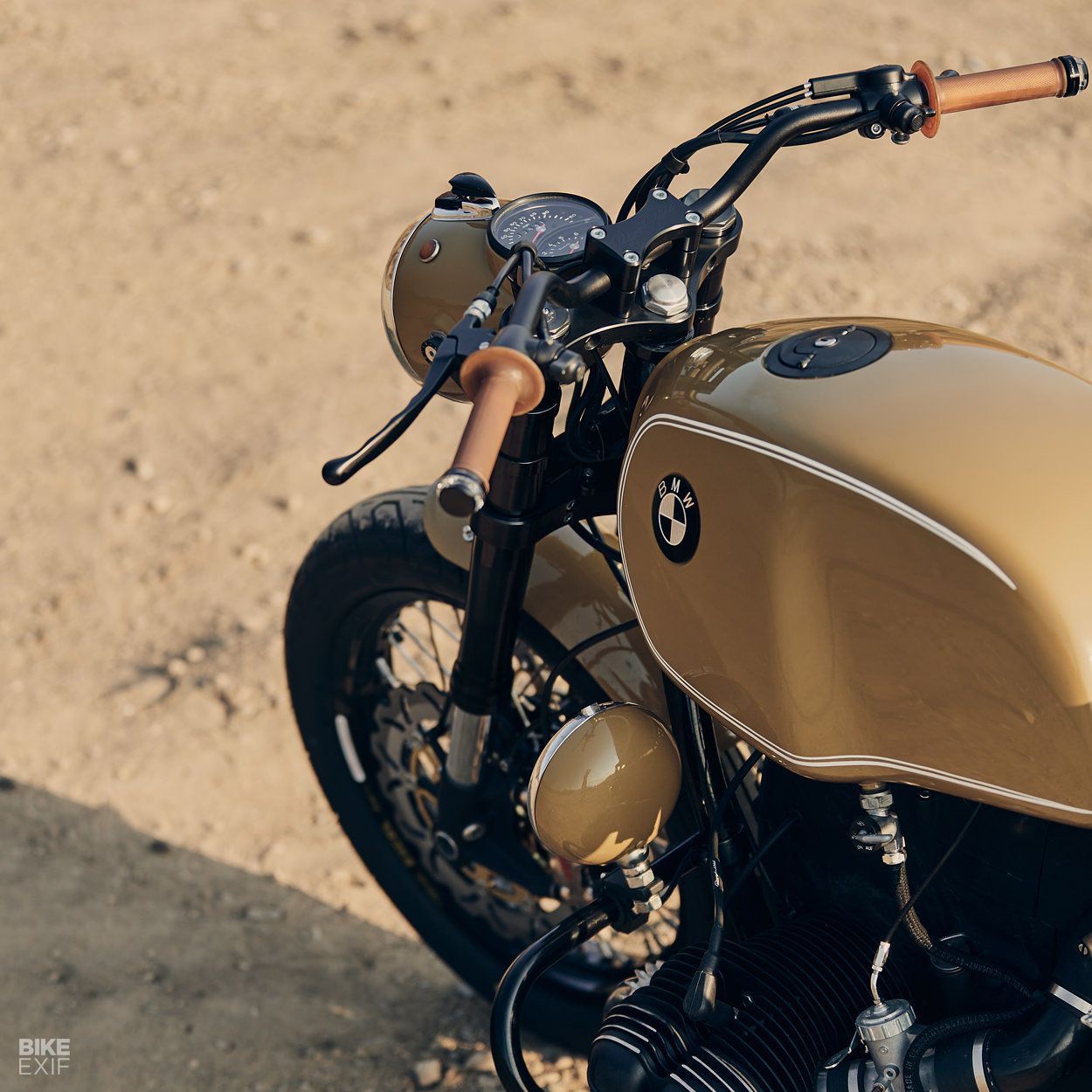 It’s a 1969 R75/5 finished in Porsche’s original ‘Olive’ Glasurit paint—a color that was offered by the Zuffenhausen factory around the same time the BMW was built. In another nod to Porsche, Roughchild have also rebuilt the speedo to resemble the gauges found in a 1969 Porsche, with a black bezel, orange pointers and silver buttons. 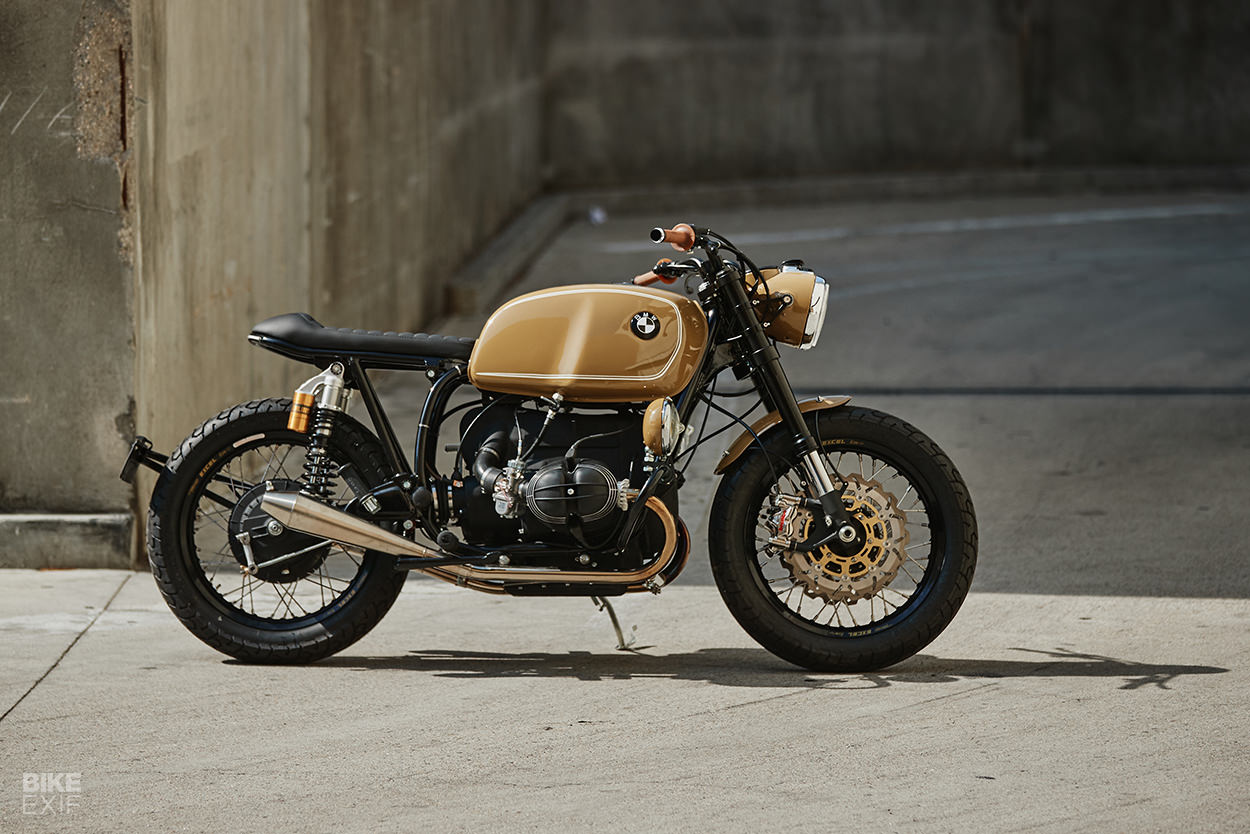 The bulk of the work is in the engine, though. Displacement is now 1000cc, with a 9.0:1 compression ratio and TwinSpark ignition. The factory airbox was drilled in the style of a 1977 R100RS, and the Mikuni carburetors have been jetted and tuned to suit.

The starter was upgraded to a lightweight hi-torque unit to take less draw from the lithium battery, which is housed under the gas tank in a custom battery tray. 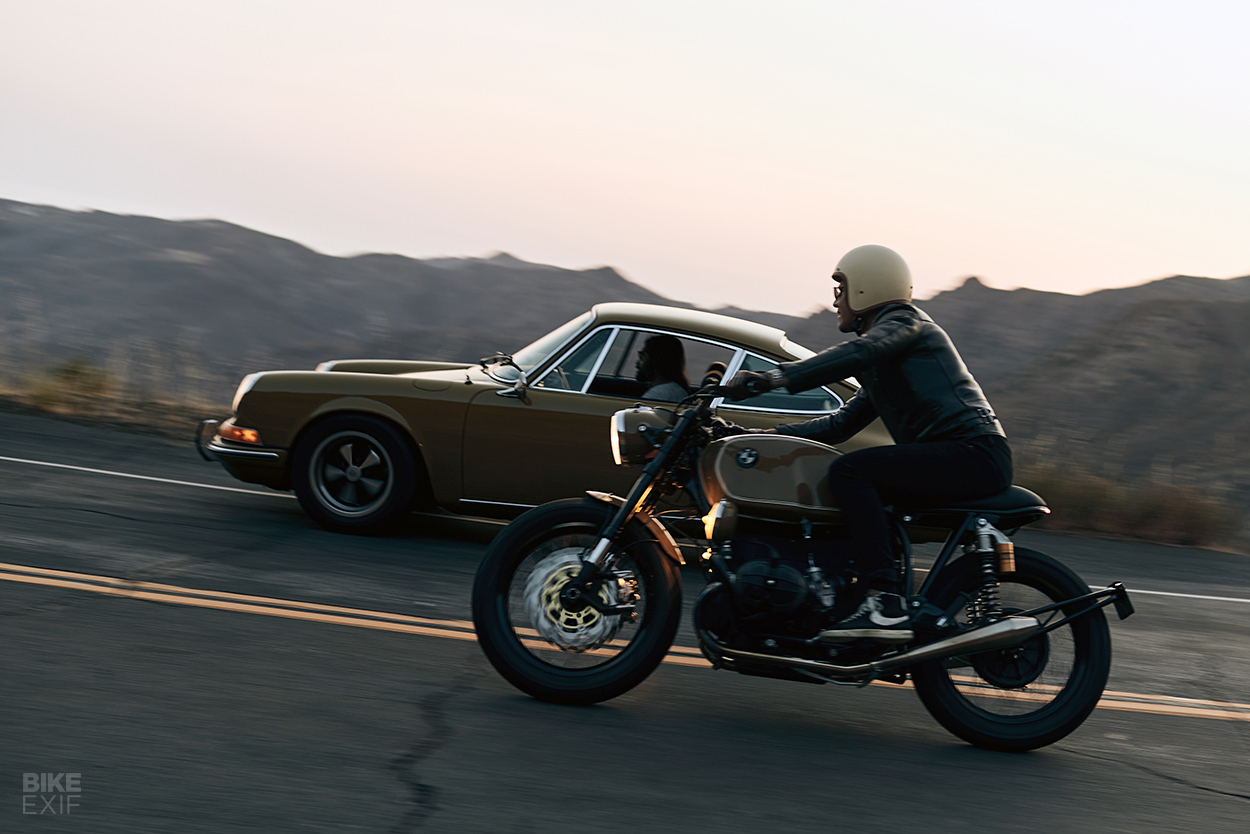 A /5 headlight bucket is mounted to a pair of Showa USD forks slotted into custom triples, and the brakes use Brembo GP4 radial calipers—operated by an under-tank master cylinder. Öhlins shocks suspend the rear and the rims are 18-inch Excels at both ends.

With modern handling, excellent brakes and decent power, ‘Olive’ is a classic café racer designed to mix it with contemporary traffic. Preferably accompanied by a vintage 911. [Roughchild | Images by John Ryan Herbert]