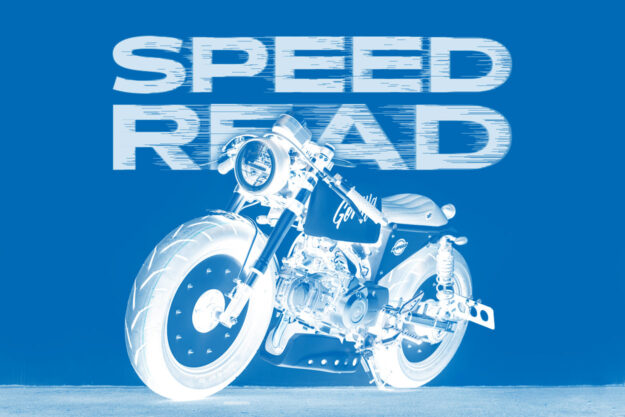 This week’s collection starts with a snow white Honda Monkey, and ends with a custom Yamaha TMAX scooter. In between, we look at a Honda XR250 from Argentina, a BMW R100 from the Czech Republic, and a BMW R100GS Paris Dakar Classic that’s still in its crate. 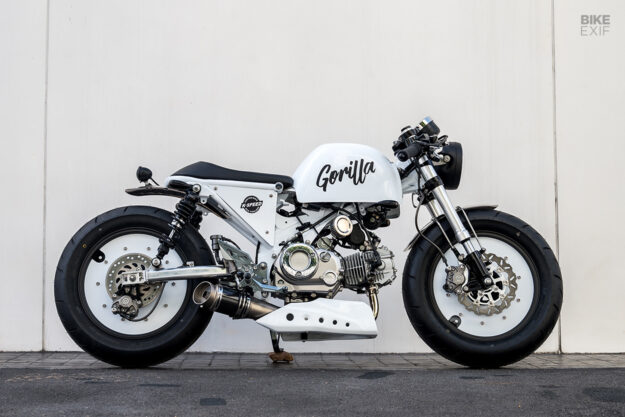 Honda Monkey by K-Speed K-Speed’s Honda Monkey customs are mega popular, so they’re regularly asked by clients to stick to their winning formula. This one was built for a snowboarding instructor, earning it the nickname ‘Snow Gorilla.’ It’s based on their previous Monkey builds, with a few choice mods to differentiate it—like its snow white paint scheme. 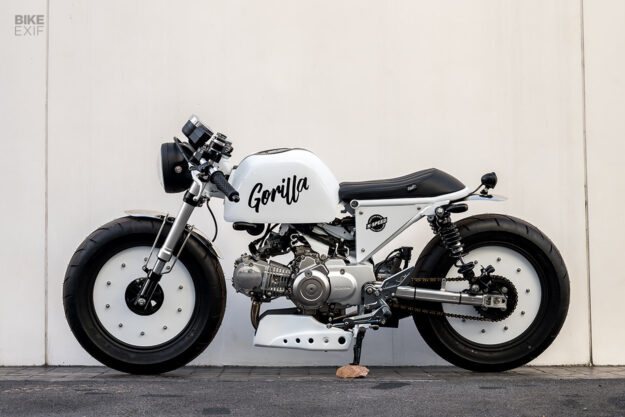 Starting with a late-model Monkey, the K-Speed team bolted on a set of 14” wheels with some alloy wheel covers. The brakes were upgraded with fancy new wave disc rotors and Brembo calipers front and rear. It might be a bit of overkill, but hey, it looks baller.

The front forks were lowered, and a set of YSS rear shocks were bolted on to get the stance just right. 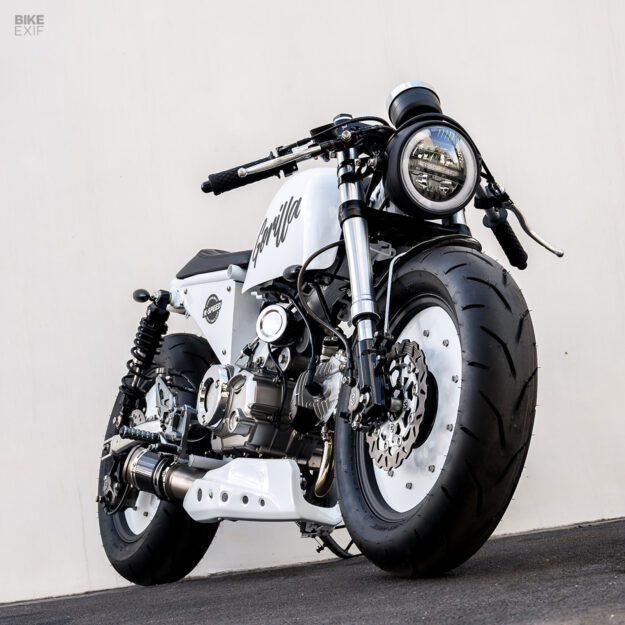 The fuel tank is an ABS cover that slips over the factory tank to give a supersized look. A new leather seat sits on top of the modified subframe, with some custom side panels to cap it off. The front and rear guards are new too.

All the lighting on the bike was revamped with LEDs all round. Clip-ons replaced the stock handlebars, with alloy plugs fitted where the handlebar risers used to be. 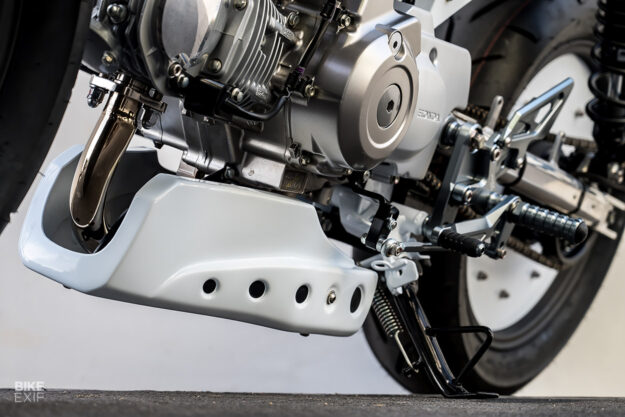 The custom belly pan is another stand-out piece, adding an aggressive and racy vibe to the Monkey. The diminutive carb gets a new air filter assembly, and a slip-on muffler terminates the exhaust.

The Snow Gorilla is another smash hit from K-Speed. Something tells me this won’t be the last Gorilla they release into the wild. [K-Speed | Images by Hipmotography] 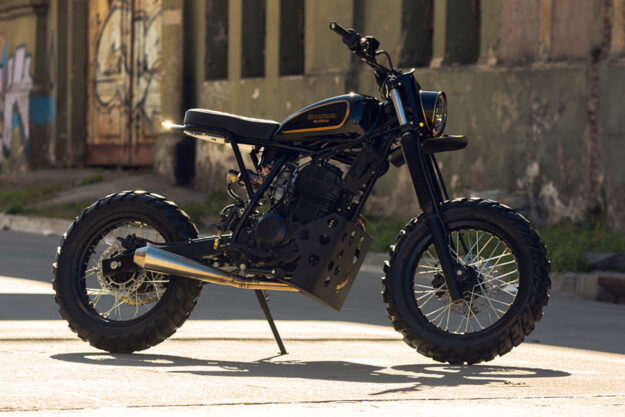 Honda XR250 Tornado by Rodando Sur The Honda XR250 was first produced in 1979, and most places in the world could get them all the way up until around 2004. While most of world moved on to the new CRF line of small capacity dirt bikes, Honda kept making the XR250 for the African and South American markets. Named the XR250 Tornado, most aren’t exactly blown away by its performance—but in far flung corners of the world, bulletproof reliability is everything. 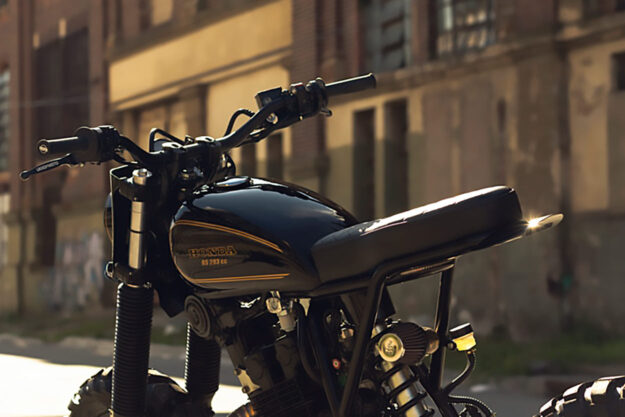 And if you’re looking for a bike to base a custom scrambler on, the XR250 is a great choice. By the time you’ve removed the factory plastic bodywork and the tank, you’re left with a solid foundation. Which is exactly what the gang at Rodando Sur in Argentina did with this 2020-model XR250.

Now fitted with new wheels and bodywork, the XR is almost unrecognizable. 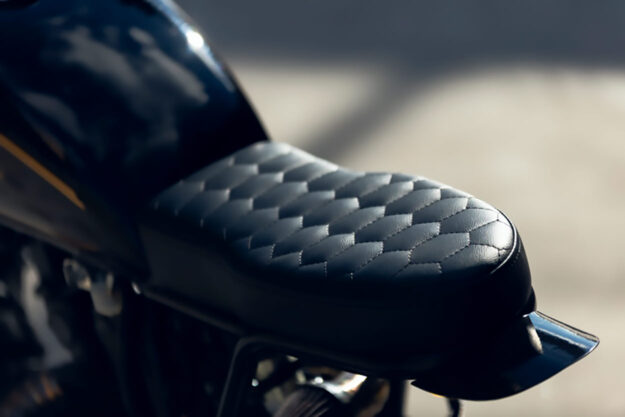 Up front is an LED headlight housed in a custom-made nacelle, just above a high-mounted fender. Rodando Sur also added new handlebars, grips and a digital speedo.

Further back are a new fuel tank and a custom-made subframe, with a rather striking seat featuring hexagonal stitching. An LED taillight is tucked away underneath. Rodando Sur did all the design and fabrication in-house, including the stainless steel exhaust header and the carb intake. 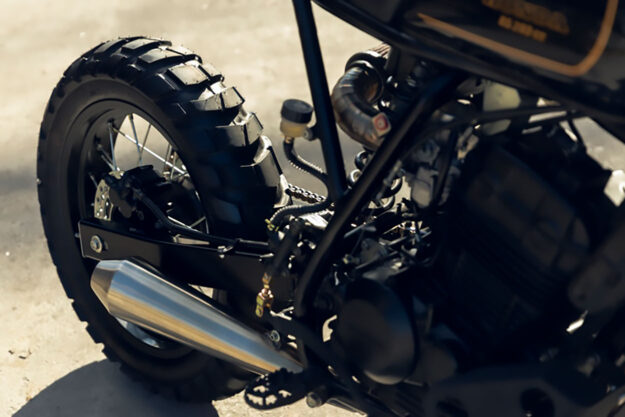 This XR is also packing a 293 cc big bore kit. Along with the new exhaust (and probably a few tweaks to the carb too), Rodando have squeezed a few extra ponies from the engine. Nicknamed the “Pig Tracker” (because the owner works in the pork industry) this XR looks like just the bike to tackle Buenos Aires’ city streets. [More] 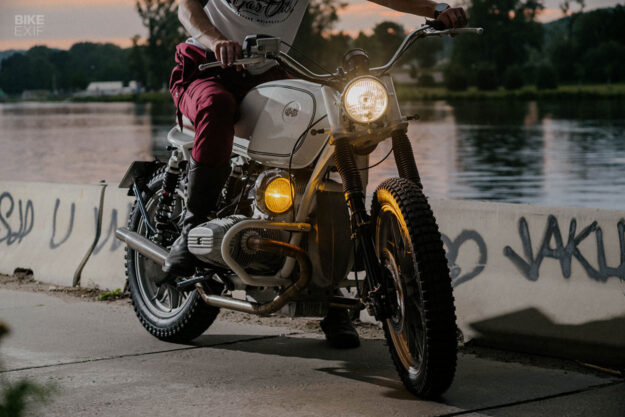 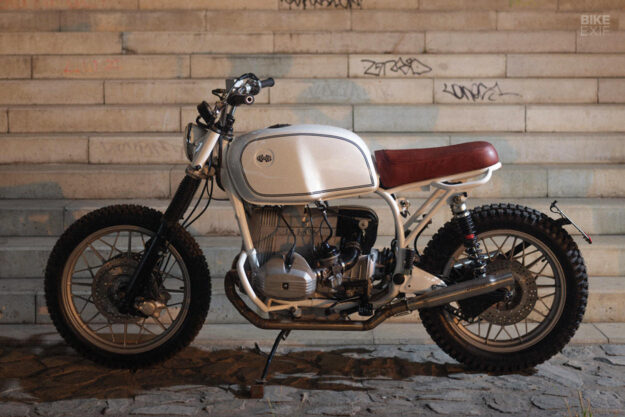 After all the fairings were removed and the bike stripped down, the wheels, engine and all the other alloy parts went off for a good sandblasting. Once the metal was laid bare, the engine was treated to a full rebuild. There is fresh paint all round, including a lick of white on the frame.

The rear subframe was modified and is now looped at the back, and welded onto the main frame rather than bolted. G&O even designed new rear shock mounts, to which a pair of YSS units were bolted. The leather seat is generously padded, with the battery hidden inside it. 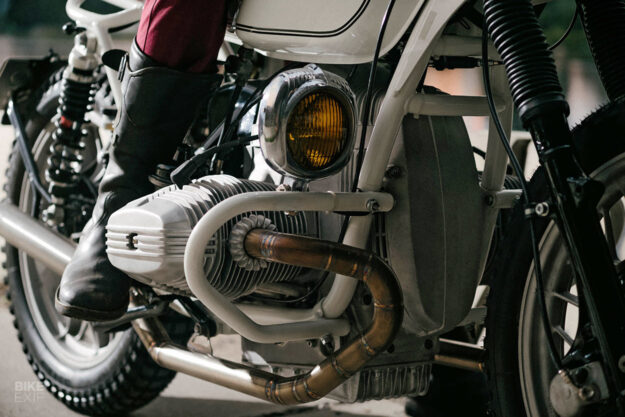 Tall, wide BSA handlebars were bolted on, behind a Motogadget Chronoclassic gauge. There is new lighting all over, including a vintage-style fog light that bolted to the right side crash bar. The electronics were updated too, complete with a full alternator and ignition kit from Silent Hektik.

Eagle-eyed BWM fans will notice that the fuel tank has also been lifted slightly in the rear to improve the lines of the bike. 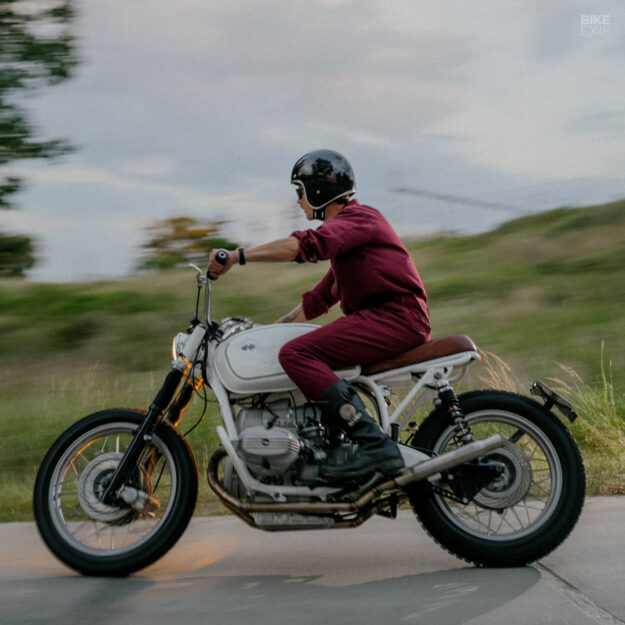 “We tried really hard to come up with a new design that is nice and functional,” explains G&O founder, Matej. “Everything is painted in pure white, as a reminder that there are not only black or grey BMWs out there.” 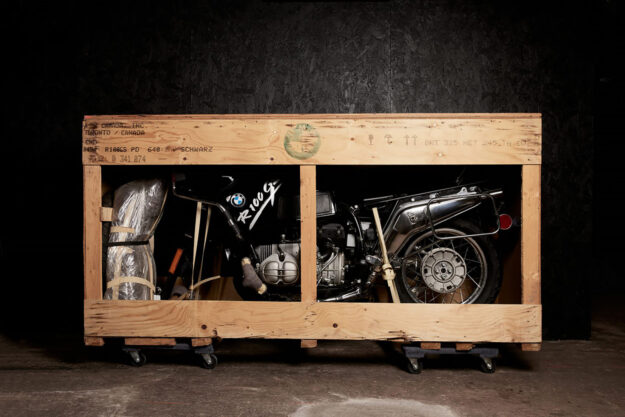 Crated 1995 BMW R100GS Paris Dakar Classic I’ll never understand people who buy a nice car or motorcycle, and only use it sparingly throughout their lives. I’ve never seen the point of owning said vehicle to only put a few hundred mile on the clock each year. This bike goes a step further than that.

This 1995 BMW R100GS Paris Dakar Classic in Avus Black has never left the crate it was delivered in. For reasons unknown, it was bought new by a Canadian dealership in 1995 and never assembled. Complete with chrome pannier brackets, chrome crash bars and classic BMW ‘peanut’ covers, it’s likely the only R100GS PD in the world still in its factory crate. 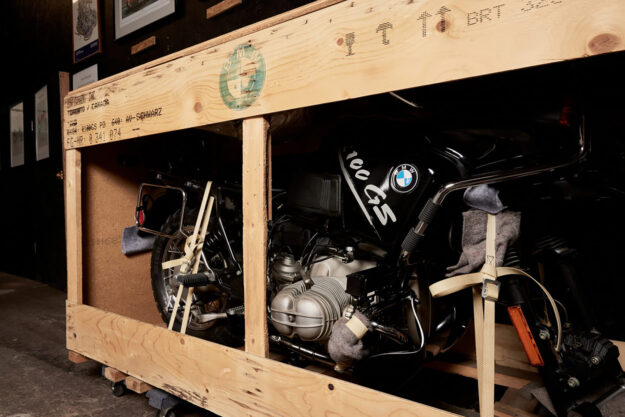 Carrying on from the success of the original Dakar-winning BMW R80GS, the R100GS Paris Dakar had a lot to live up to. But thanks to its bigger motor and mechanical simplicity, it was highly sought after—and still is today. The Paris Dakar models models featured a larger fairing and a 25 liter fuel tank, further adding to the bike’s touring chops.

If you’re wondering just how special a crated R100GS is, consider this: Brooklyn-based Moto Borgotaro just sold this one on Bring a Trailer for the tidy sum of $47,250. [More] 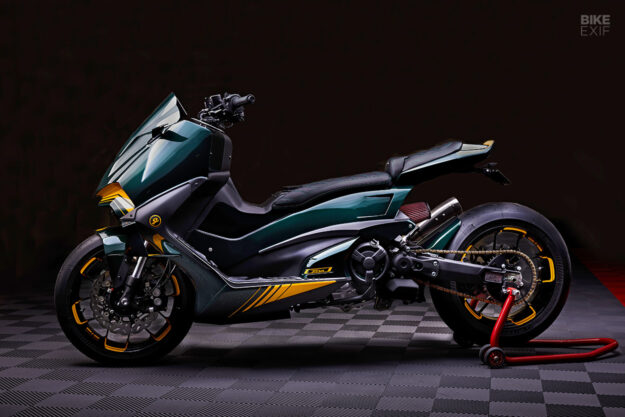 Yamaha TMAX 560 by Ortolani Customs The older I get, the more maxi scooters make sense. Comfortable, long seat with upright ergonomics? Check. A zippy engine that can get you well over the speed limit in almost every country? Check. Cruise control, windscreen and enough storage space for a weekend away? Check, check and check.

The 560 cc Yamaha TMAX fits the bill—and this custom TMAX from Olivier at Ortolani Customs looks completely bonkers. It was commissioned by the Yamaha Castellan dealership. 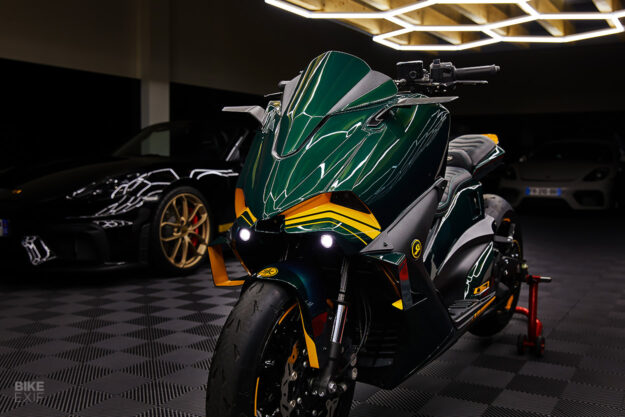 “They wanted me to modify a vehicle for them, but I specialize in the modification of motorcycles,” describes Olivier. “It was a great surprise when they asked me to modify a Yamaha TMAX 560. I hesitated for a long time, then I decided take on the challenge.”

“I told myself that it could be cool, especially since modified TMAX models have been built by Roland Sands.” 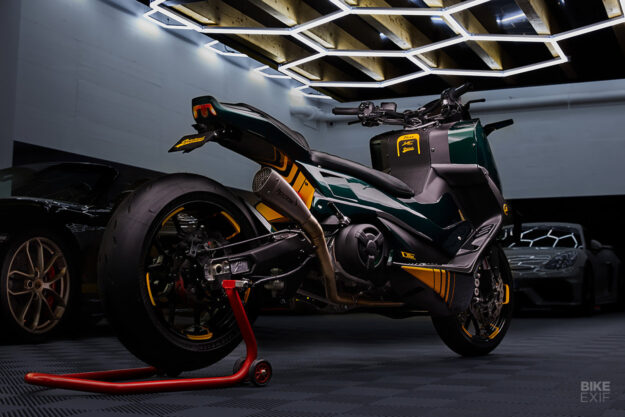 Wheeling a brand new TMAX into the workshop, Olivier got to work. A full tear down was completed, and after some 17” wheels (lifted from an Aprilia RSV4) were bolted on, the team got a good idea of what they could achieve. Olivier settled on a more aggressive and sporty aesthetic, but from the get go, he didn’t want to just convert it into a motorcycle.

All the bodywork was made by hand from aluminum. Maxi scooters have a vast amount of bodywork compared to a normal motorcycle, so this was more akin to coach building than bike design. The front of the fairing and LED headlight design was roughly inspired by Yamaha’s venerable R1, but the rest of it is straight out of Olivier’s imagination. 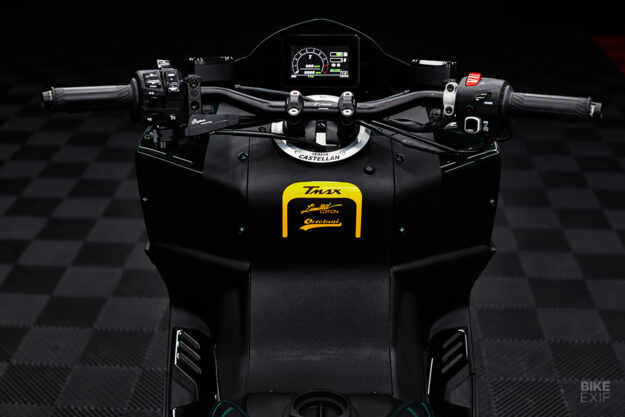 The TMAX is trimmed with high end parts from the likes of Rizoma and HP Corse, and a custom-made TFT dash that retains all the factory controls. This was created especially for the project by DEV’MOTO in Marseille.

Then there’s the stunning paint job. Olivier laid it down himself, opting for a Porsche 911 GT3RS green, with Lotus yellow accents. [Ortolani Customs | Images by Alex Chailan and Wellky Films] 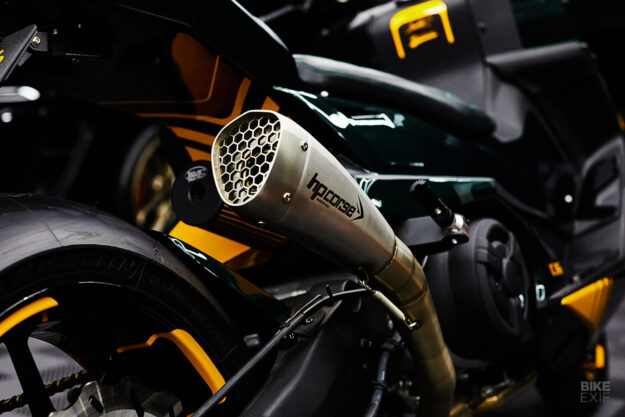