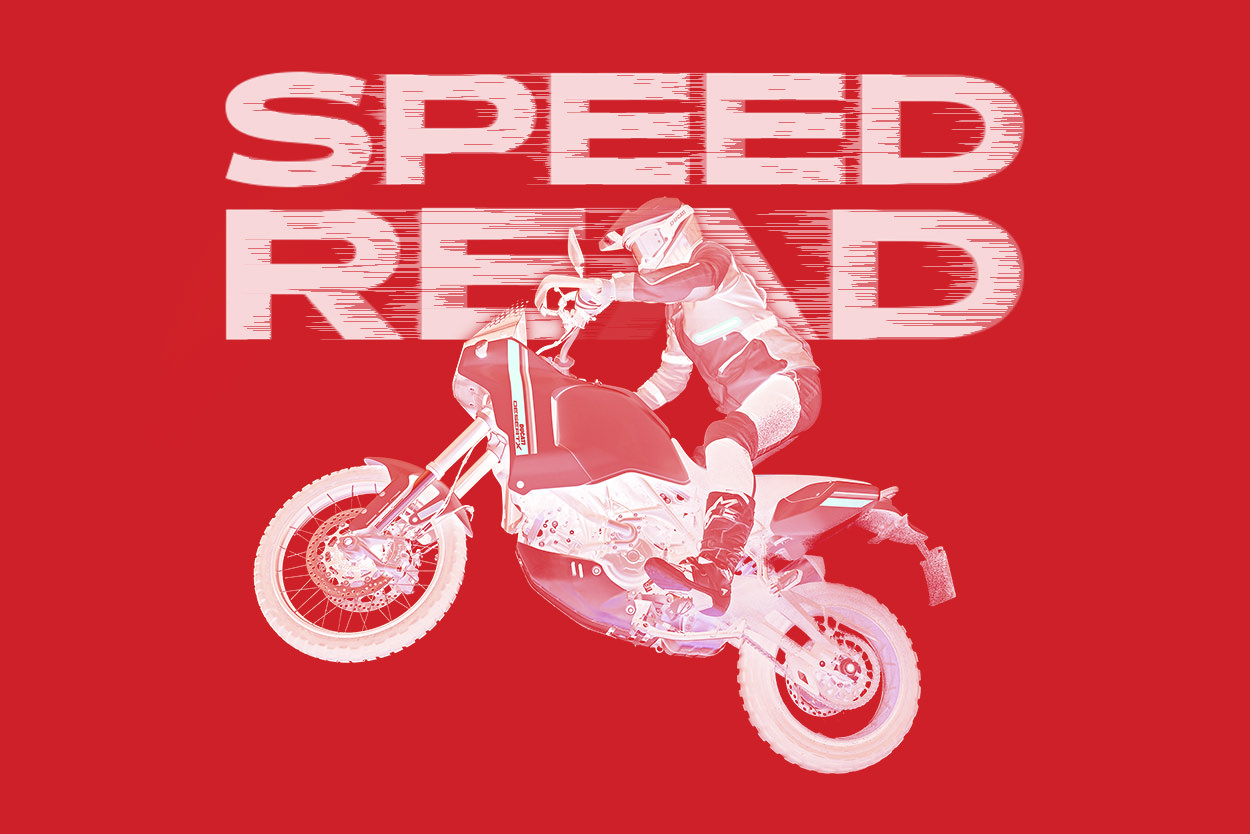 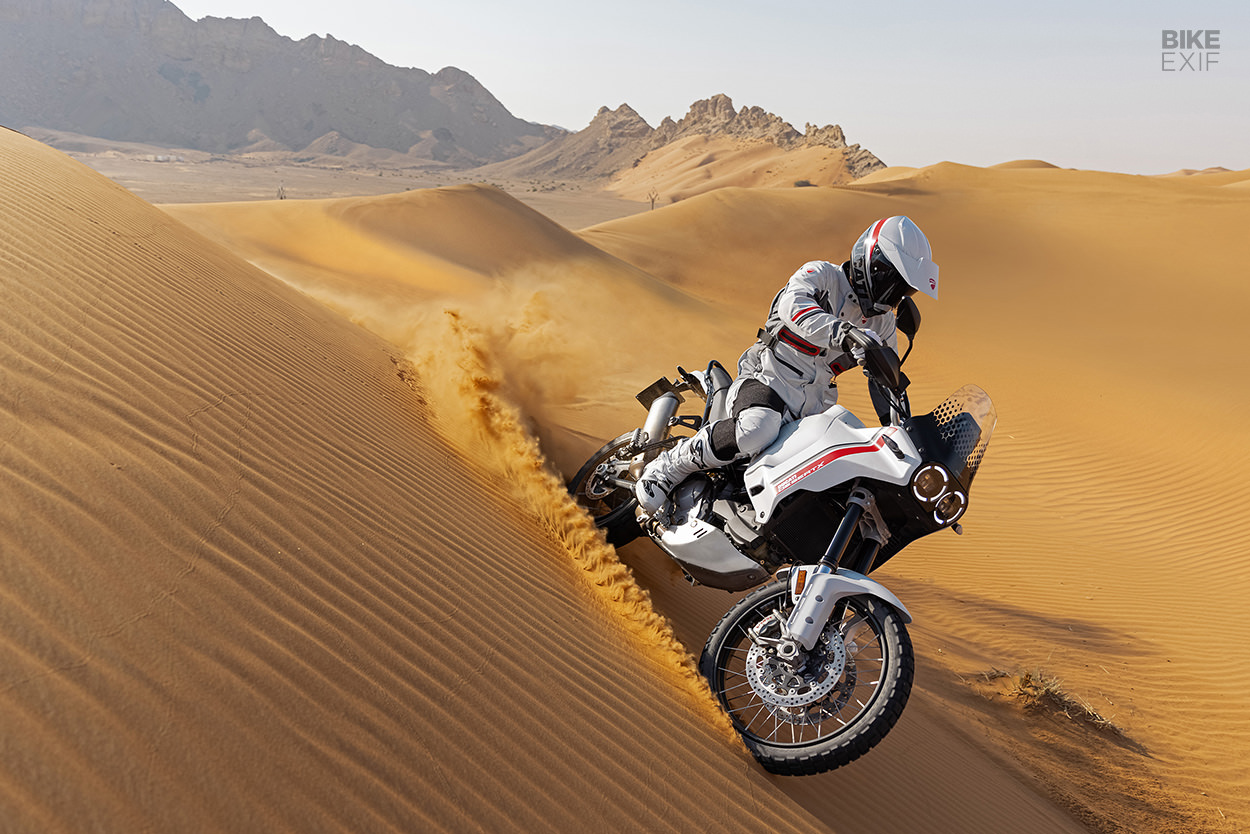 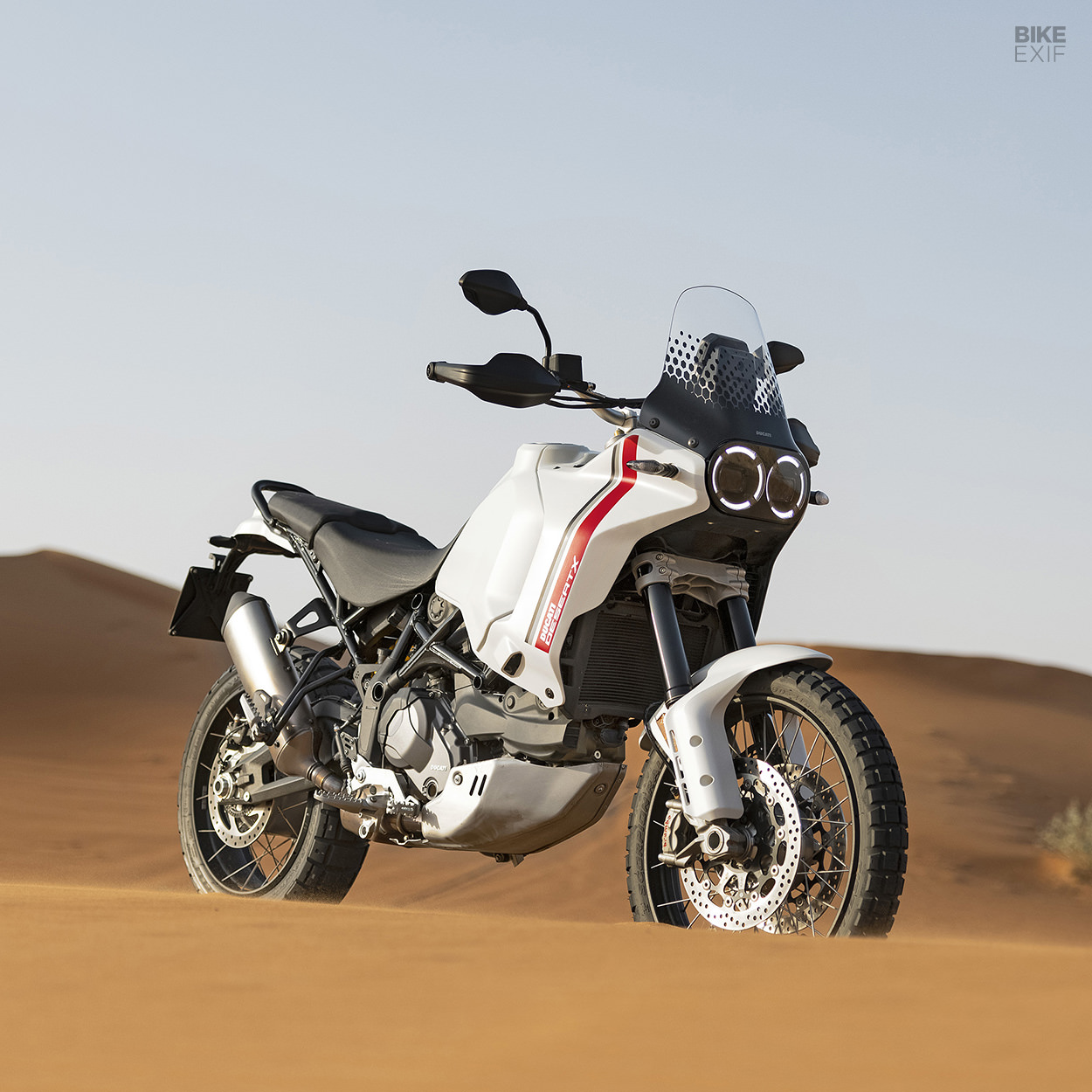 It clearly channels Dakar rally icons like the Yamaha Ténéré and the mighty Cagiva Elefant—but with a contemporary edge.

It’s not all show and no go though. Powering it is Ducati’s 937 cc Testastretta engine, derived from the new Monster and Multistrada V2. It’s good for 110 hp at 9,250 rpm and 68 lb-ft (92 Nm) of torque at 6,500 rpm. Power’s managed by a full electronics suite, including multiple customizable riding modes, cornering ABS, traction control, engine braking and wheelie control, a quick-shifter and more. 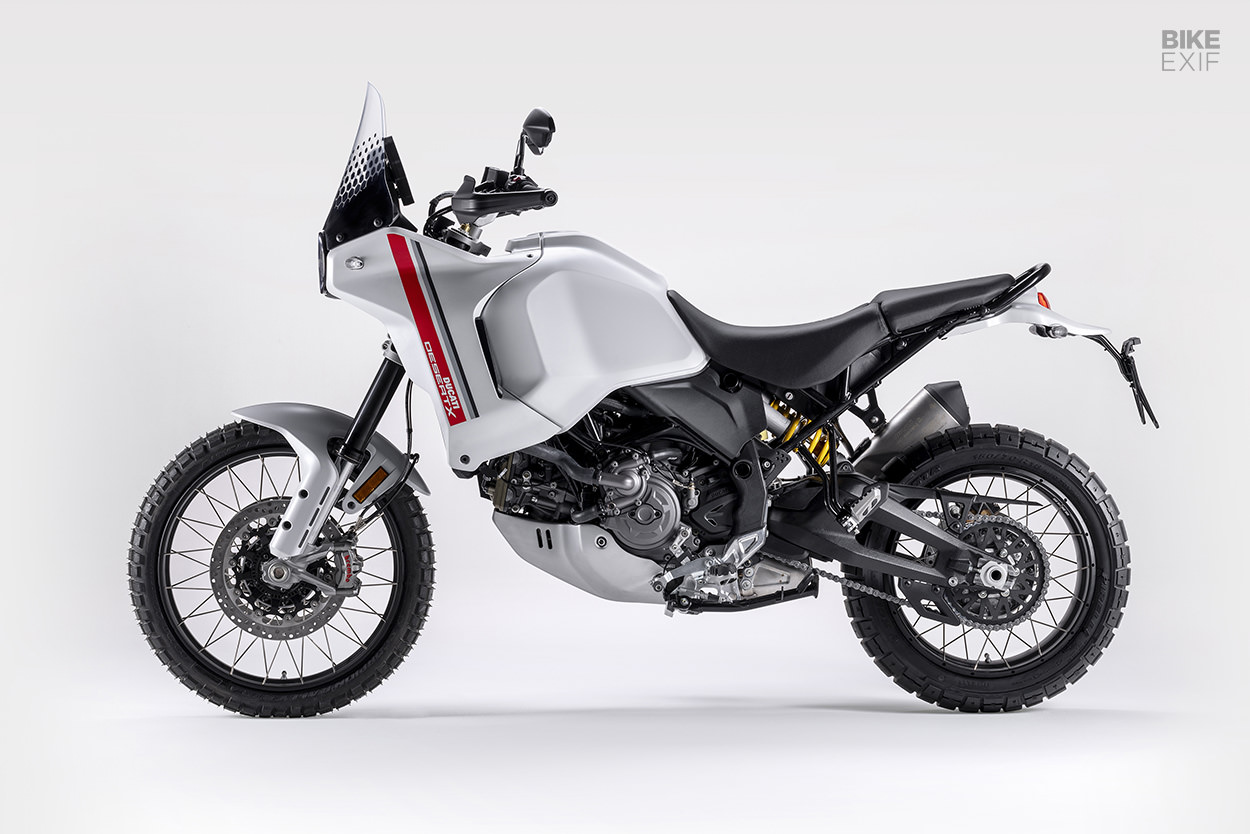 The DesertX’s chassis setup points to a bike dedicated to pukka off-roading. There’s fully adjustable KYB suspension at both ends, with 230 mm of front and 220 mm of rear travel. The wheels are 21F/18R tubeless spoked items, with Pirelli Scorpion STR tires as standard. 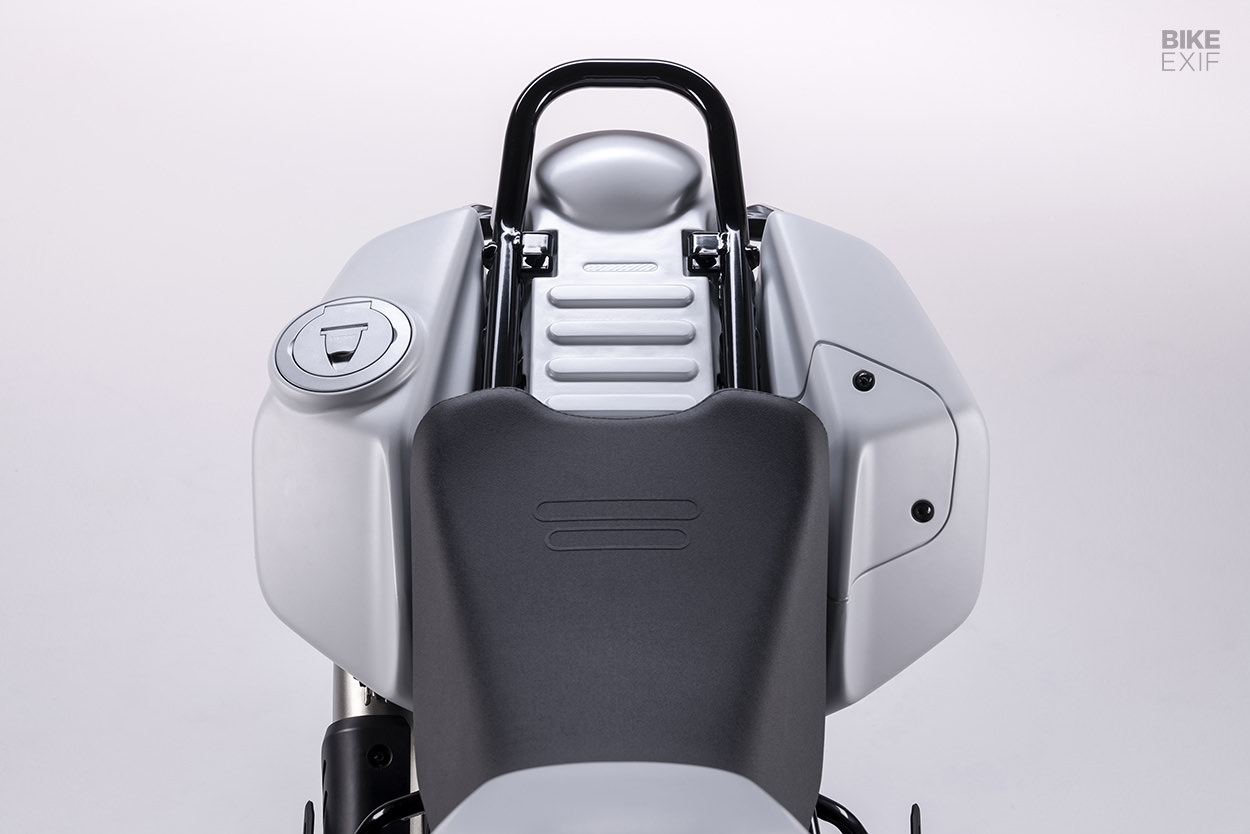 The fuel tank design is pretty neat—the main tank holds 5.54 gallons (21 l), but there’s an optional rearward tank that adds an extra 2.1 gallons (8 l) capacity. The fuel transfers to the front tank when it dips below a certain level, and can also be activated via the dashboard.

There’s a lot to digest, but other standout features include a TFT display, LED lighting and a retro-fabulous livery.

With Triumph also dropping news of their upcoming Tiger 1200 this week, the adventure bike market sure is getting spicy. But we tip our hats to brands brave enough to build capable dual sport bikes with massive hits of retro styling. If you have a throwback Paris Dakar itch, the DesertX might just scratch it. [Ducati DesertX] 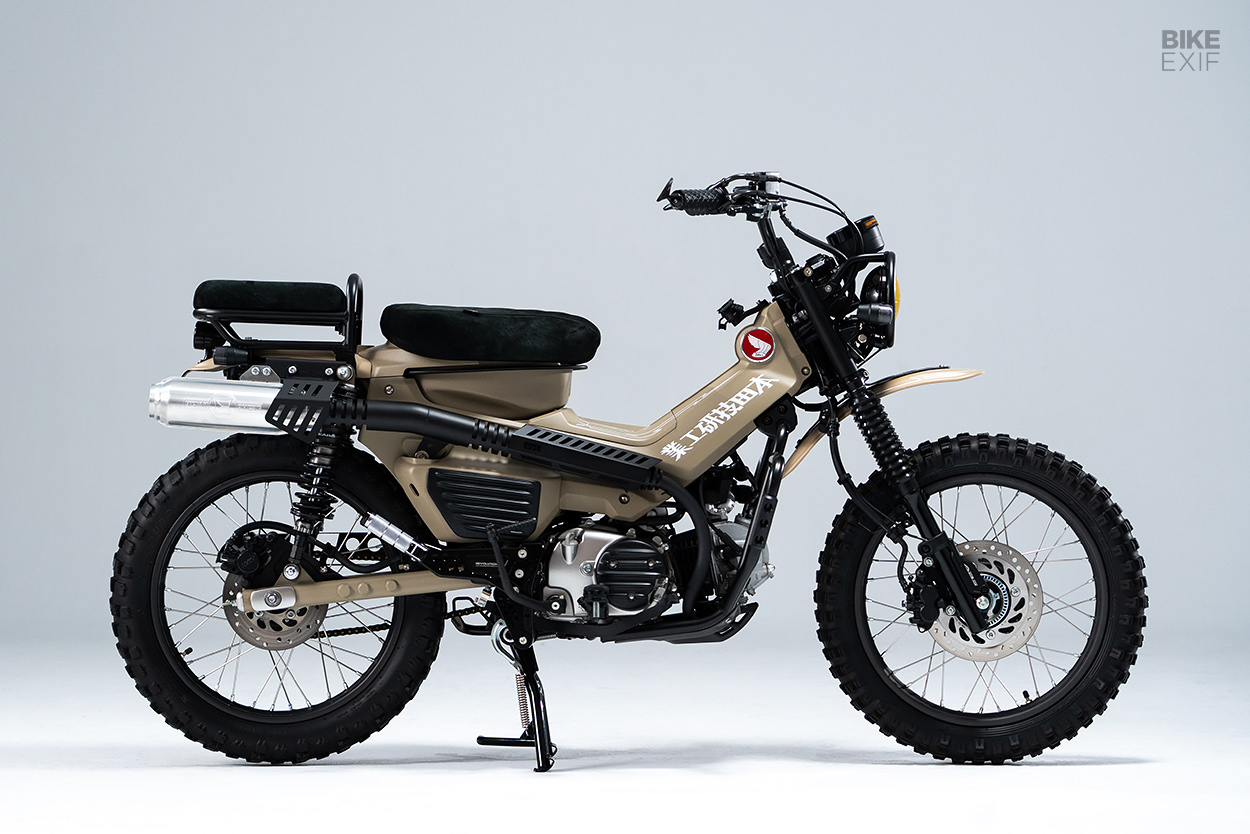 Honda CT125 by Onehandmade If the Ducati DesertX is a little out of your price range, perhaps this sweet little Honda CT125 Hunter Cub would do the trick. It’s been built by Qun Hung at Onehandmade in Taiwan—and it’s a far lighter custom job than what we’re used to seeing from him. 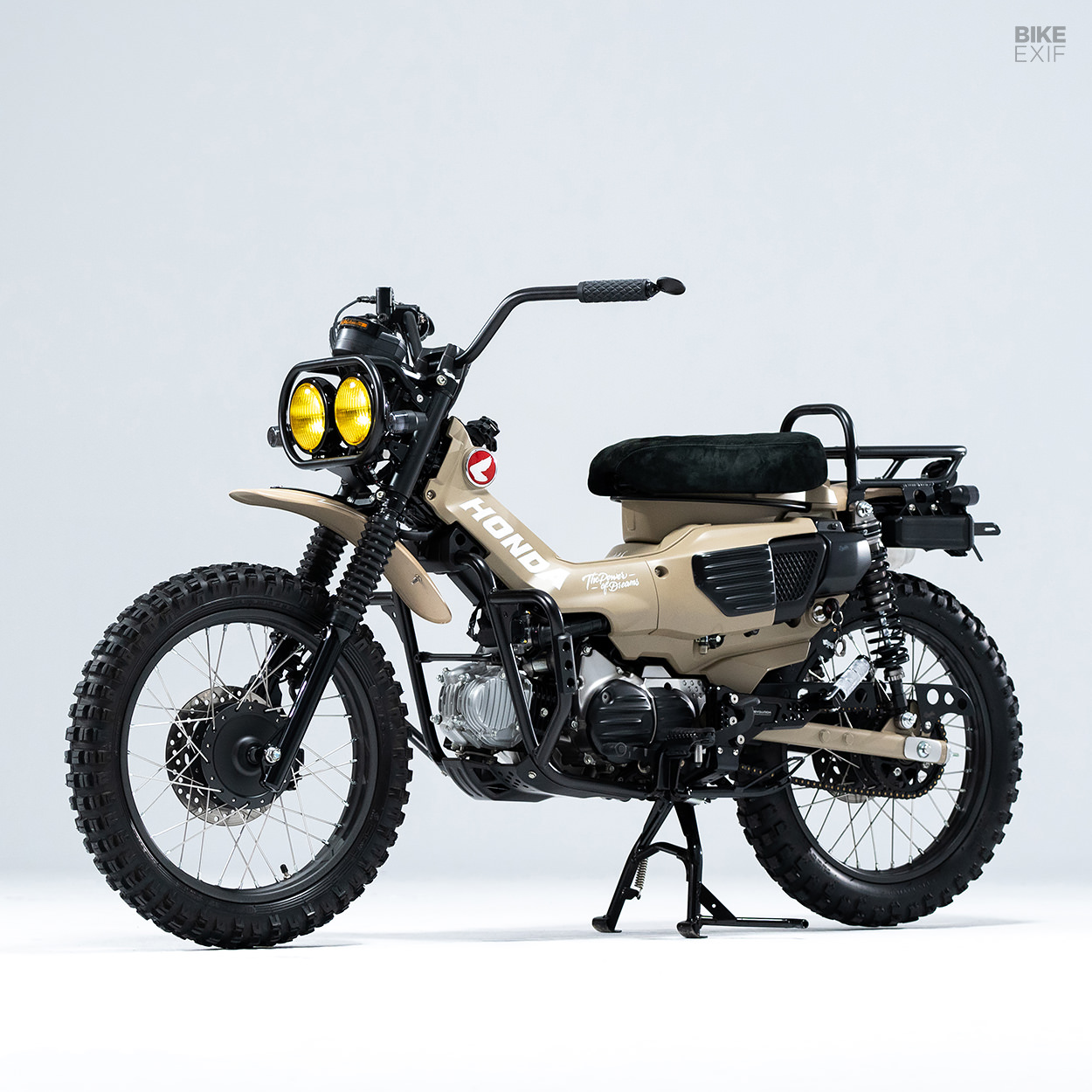 “The bike’s owner is a photographer that I’ve known a long time,” Qun tells us. “One day he asked me if I can modify his little bike. I said why not—I don’t just make expensive bikes, I have fun with anything I’m interested in.”

The mods might be light, but they’ve hit the sweet spot for the gutsy little CT125. Bolt-ons include a set of knobbly tires, and a new exhaust from Moriwaki. Out back is a new luggage rack that can take a pillion pad or storage box, and a Onehandmade taillight. 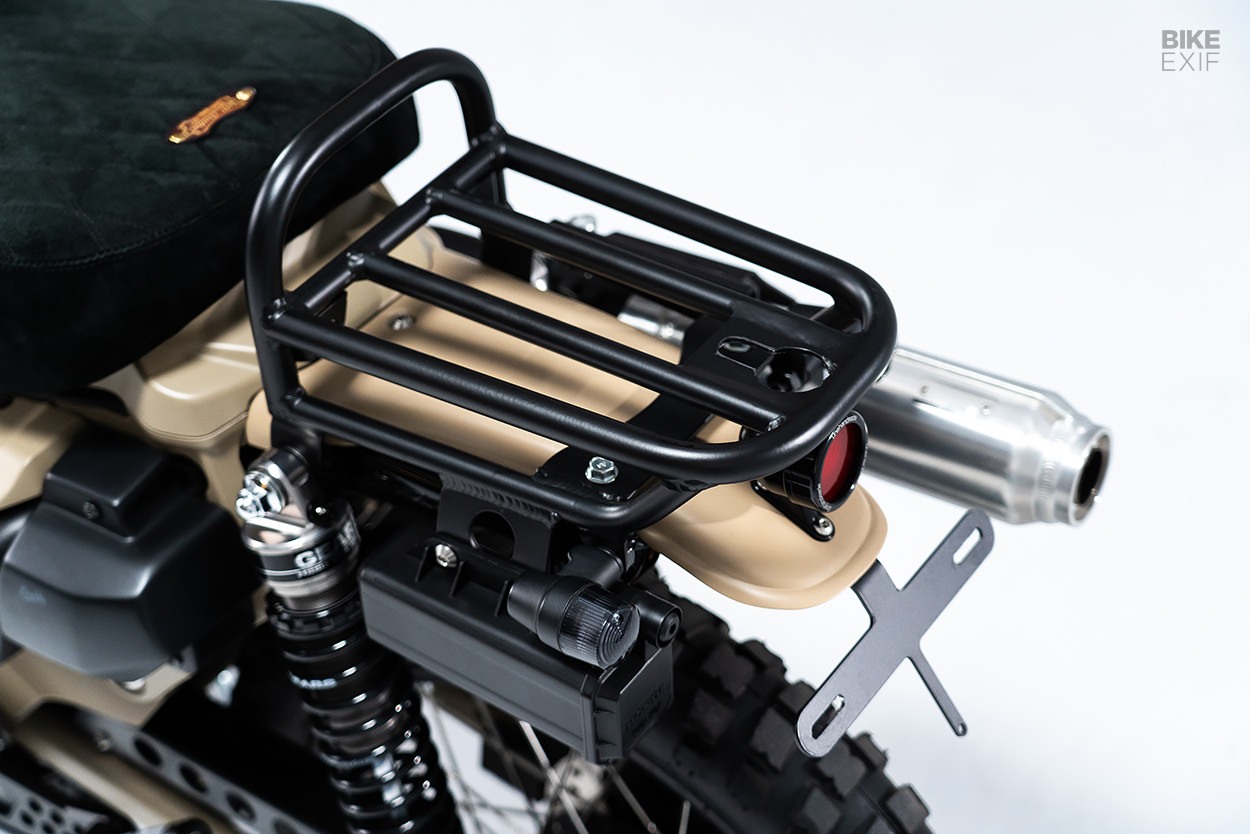 The seat’s been recovered too, and the CT125 now wears ribbed engine and side covers, a new set of rear shocks and classier turn signals. The high front fender and reworked rear fender are custom items.

We’re loving the work up front though, where twin Baja race-style headlights give the Honda a purpose-built feel. Qun also reworked the cockpit with new bars, micro switches, grips and bar-end mirrors. There’s a clever smartphone mount lower down, and some light pin-striping work to add another custom touch. 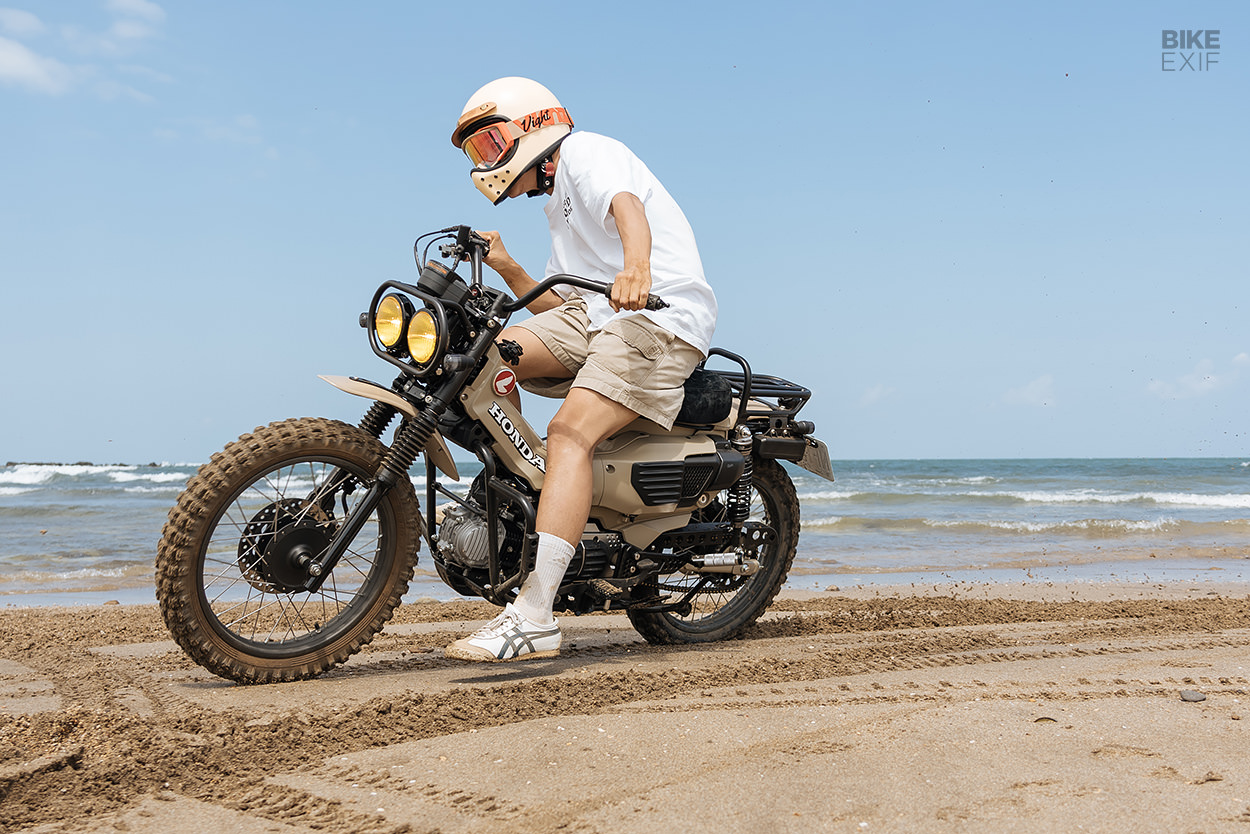 Clearly Qun applies as much love to ‘smaller’ custom jobs like this, as he does to his extensive rebuilds. This is one scoot we’d happily hoon around on. [Onehandmade | Images by Allen Kuo] 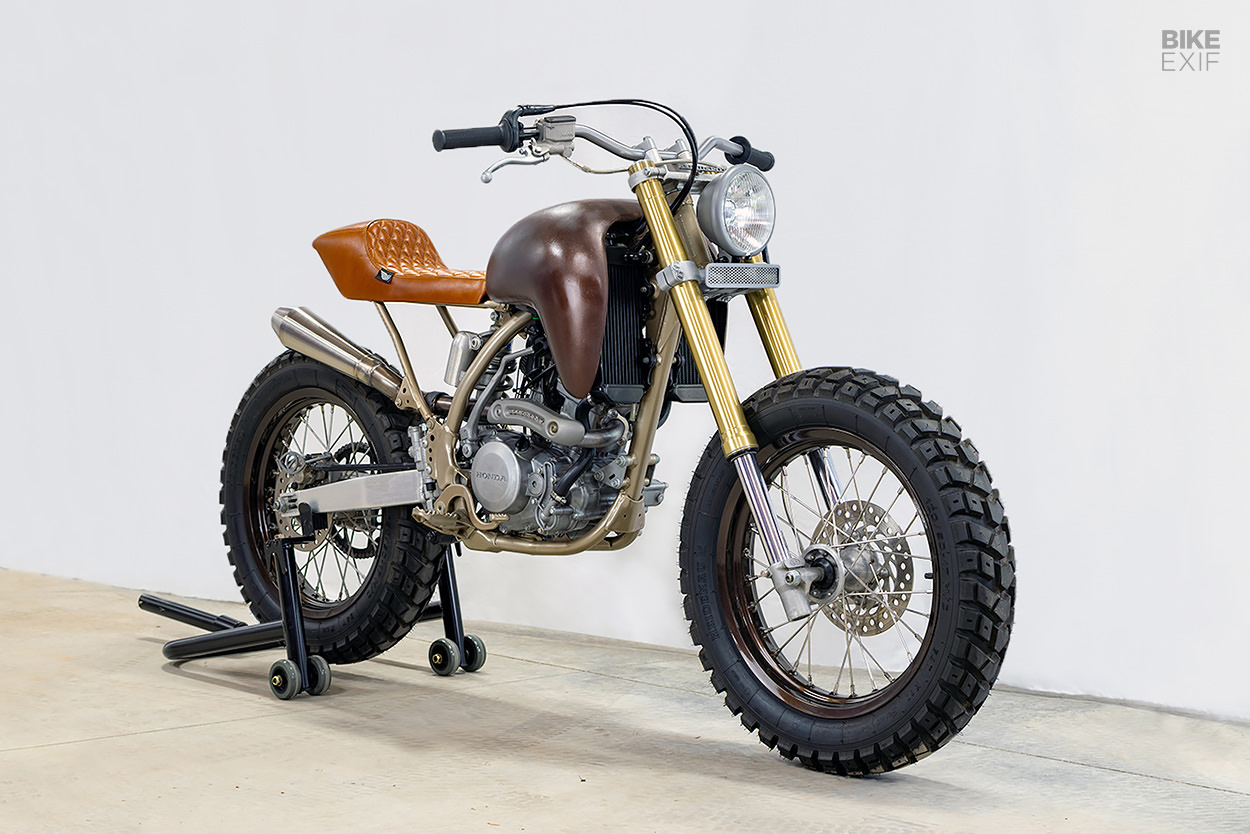 Honda CRF150RB by Ben Gradel ‘Blindspot’ is Ben Gradel’s first custom build, and he’s knocked it out the park. Starting with a pint-sized Honda CRF150RB, Ben transformed it into a stripped down, all-terrain escape vehicle with a number of intriguing custom touches. And the best part, is the reason he built it in the first place…

“I’ve attended The One Moto Show the last four years,” Ben tells us, “and made acquaintances with Hugo Eccles of Untitled Motorcycles. He challenged me to bring a build a bike of my own to the show. So I decided to make my dream a reality, and embark on building my first motorcycle.” 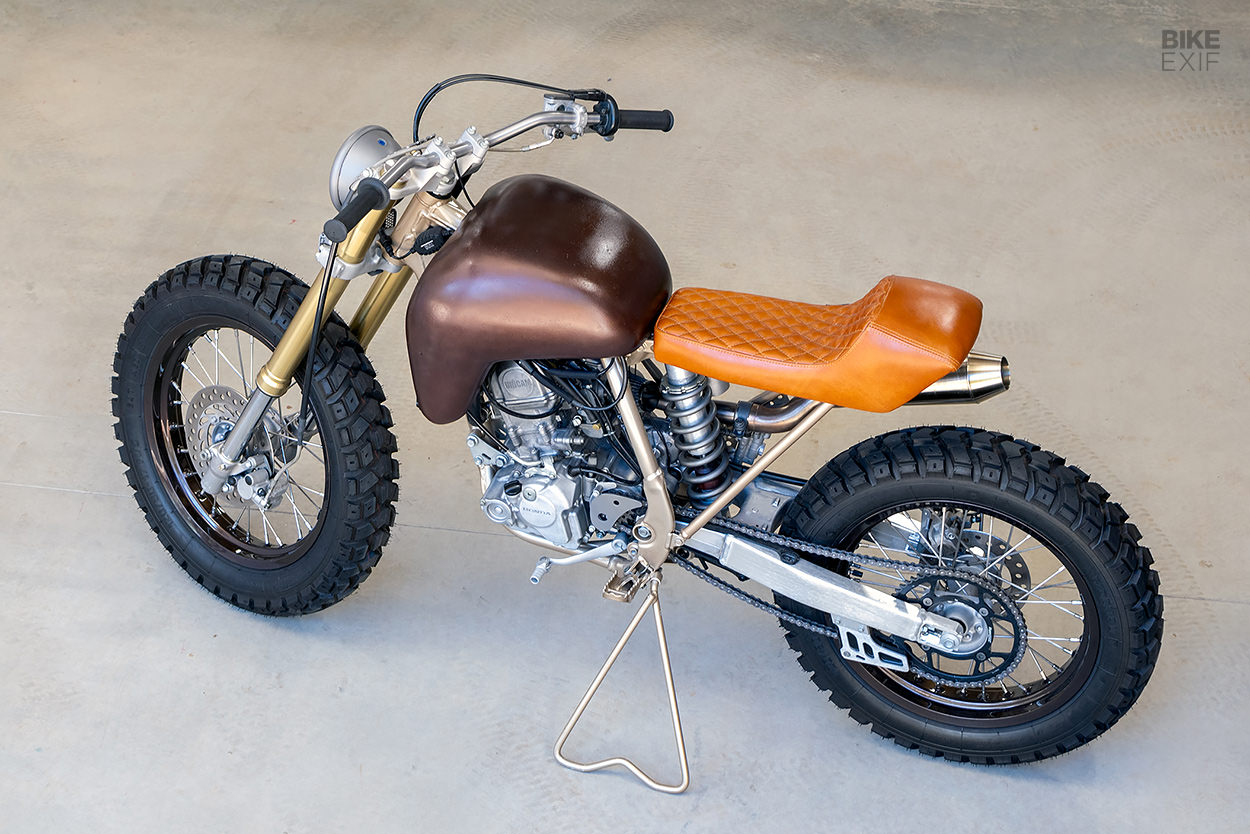 “Since I was small, vehicles from Bond movies and other spy films excited me with their elegant looks and wild hidden features. This inspired me to craft my own unique vehicle packing hidden features to evade bad guys.”

Starting with a 2007-model CRF150RB, Ben tore it down to reveal the tubular steel frame, then started crafting new bodywork. The fuel tank’s really interesting—it’s actually a cover, shaped from white birch plywood. Ben made a foam form first, then 3D modeled that and machined over 80 wooden ribs to laminate together. 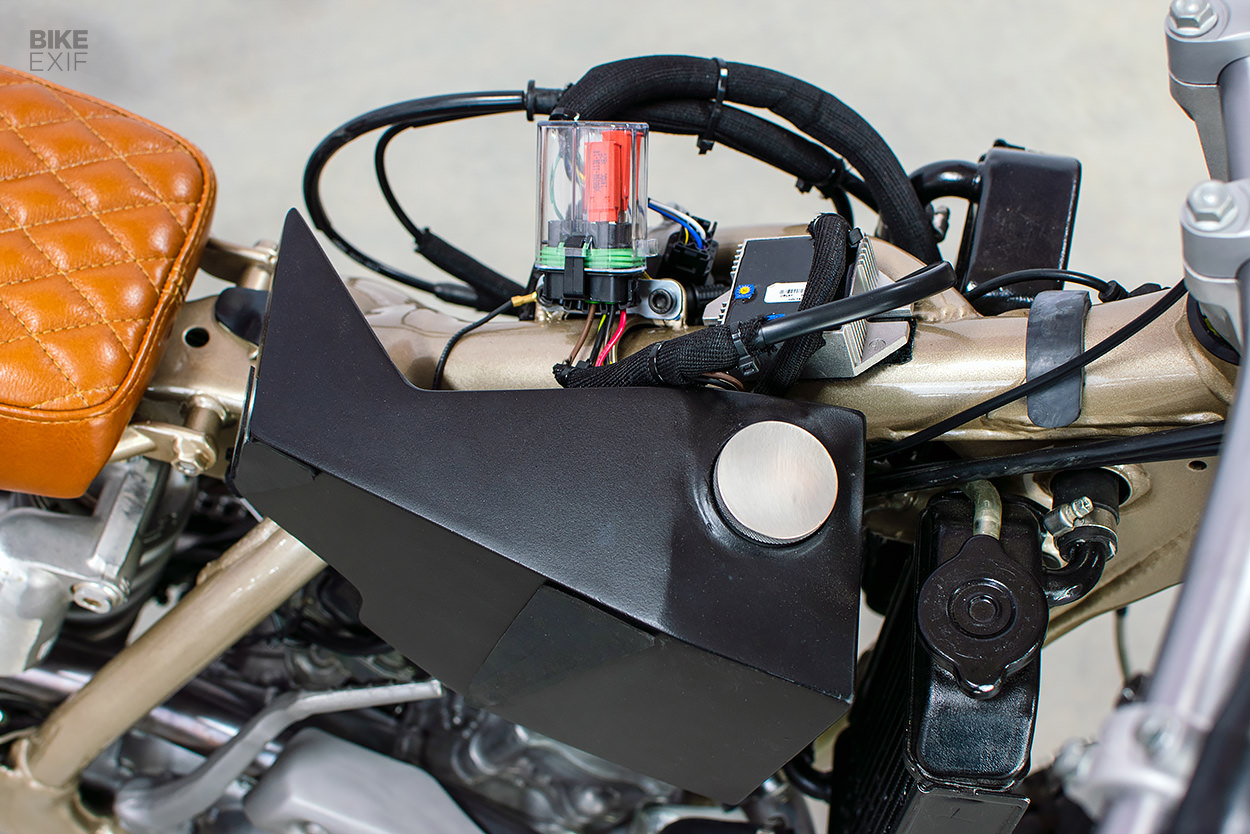 Sitting underneath it is a steel fuel cell and the bike’s important electrical bits. One seemingly impractical, but fun and stealthy feature, is the clutch lever—it’s hidden ‘under’ the tank on the left side. Luckily Ben also installed a Rekluse automatic clutch system.

Out back is a custom seat, with the taillight sunken into a mesh panel underneath the kicked-up tail. A custom exhaust with a rowdy reverse cone megaphone snakes out from under the seat. 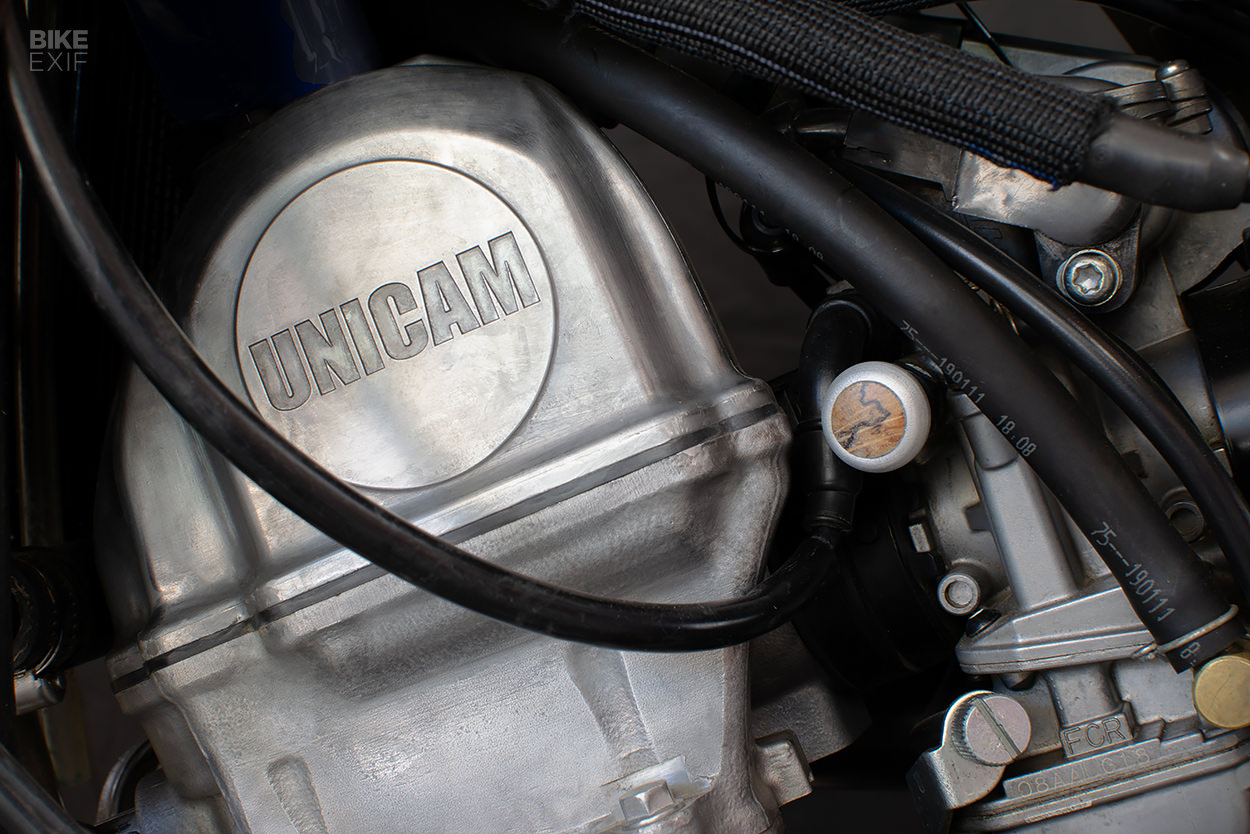 This scrambler’s also sporting some very subtle, and very neat, details. Ben machined a rear brake guard with a custom logo on it, with the same logo adorning the top yoke. And he turned a new choke knob out of aluminum, with a California oak inlay harvested from trees cut down on his parents’ property, where much of the work happened.

Ben actually started the build a couple of years ago while he was finishing college—but sometimes drove three and a half hours to his parents’ place when he didn’t have the right tools on campus. He also picked up a number of skills along the way, like 3D printing, fiberglassing, metal fabrication, welding, foam sculpting, and electrical and mechanical work. 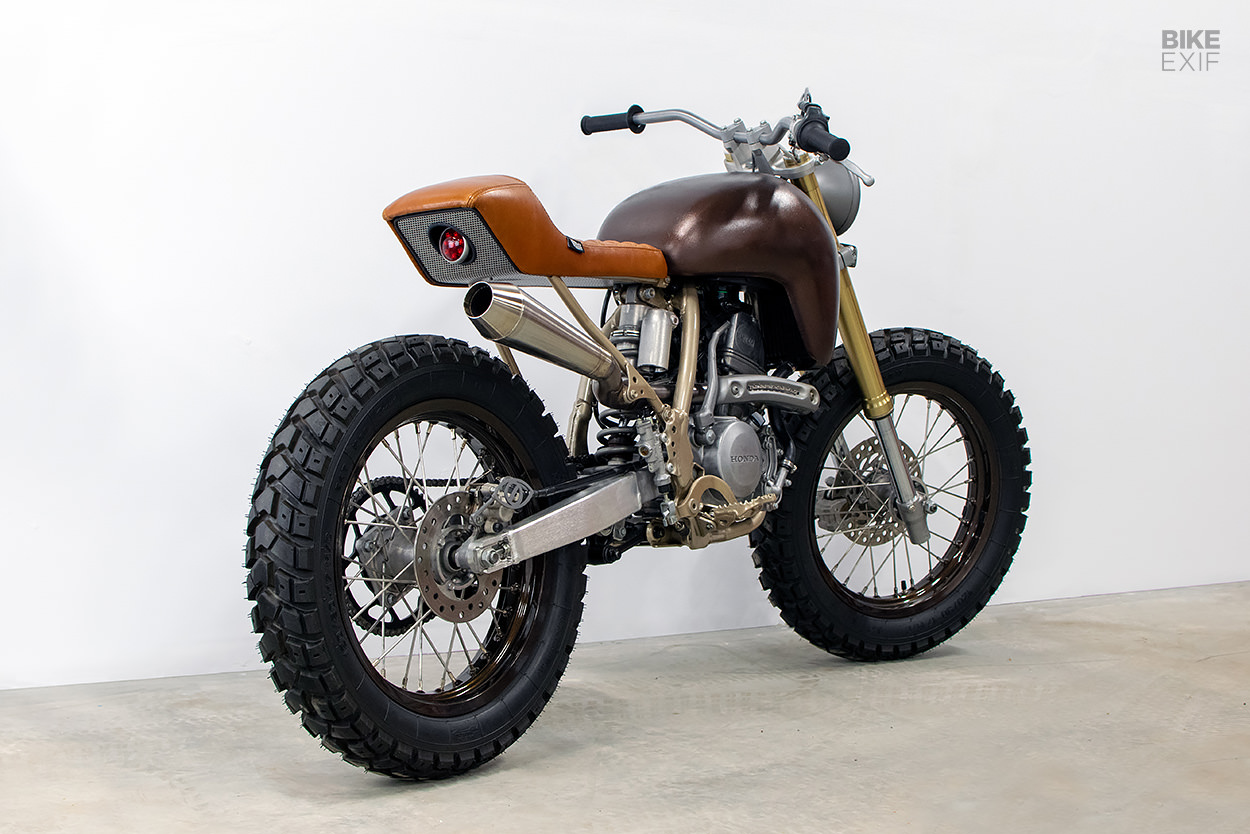 “I had heard from many builders that builds take longer than expected, and are more expensive than you expect,” he confesses, “but I am truly awed by the degree to which this is true. Blood sweat and tears have been poured into this project and I have grown a great deal from tackling this build.”

“It is the longest, most expensive and most difficult single project I have ever embarked upon.” [Ben Gradel] 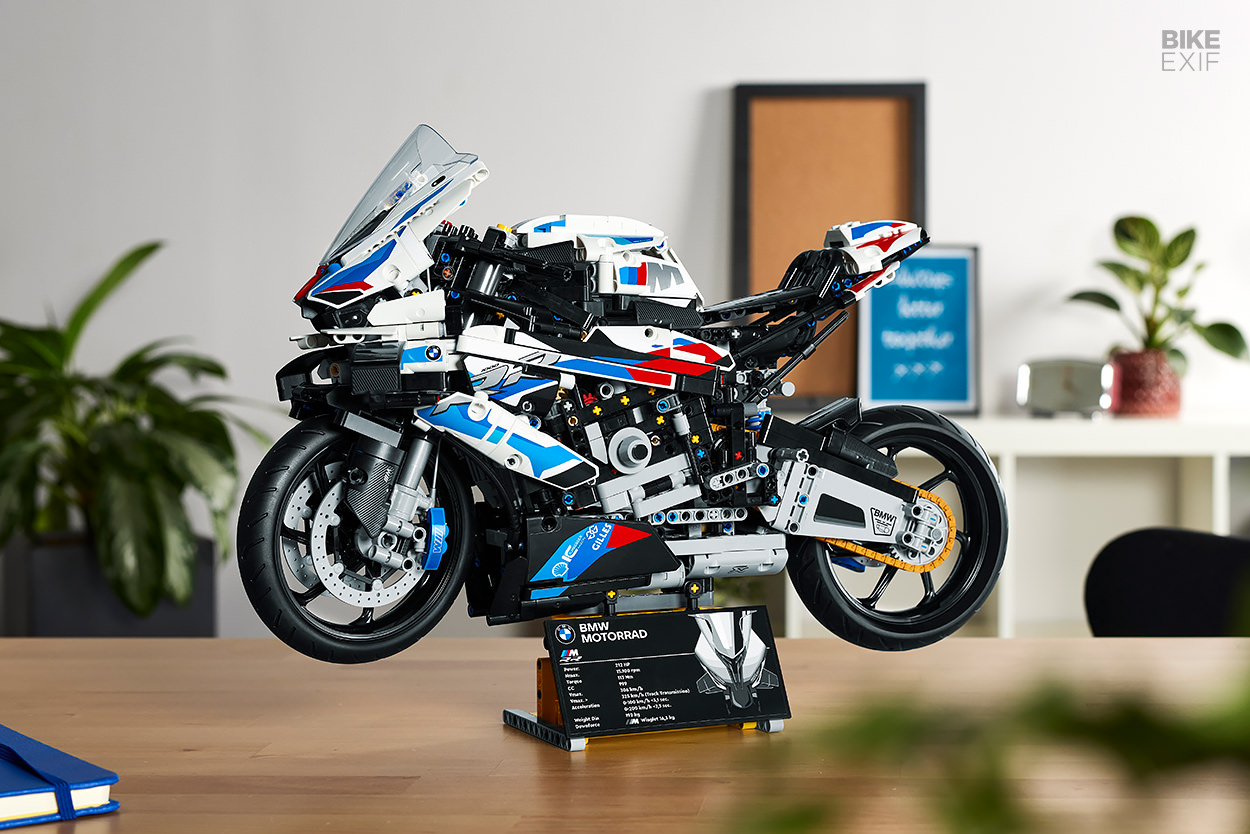 Set to go on sale in the new year, this 1:5 scale model might not have the same 212 hp output as the bike it mimics—but it looks like oodles of fun to build. The kit includes a whopping 1,920 individual pieces, and, once built, measures 45.5 cm [about 18”] long. 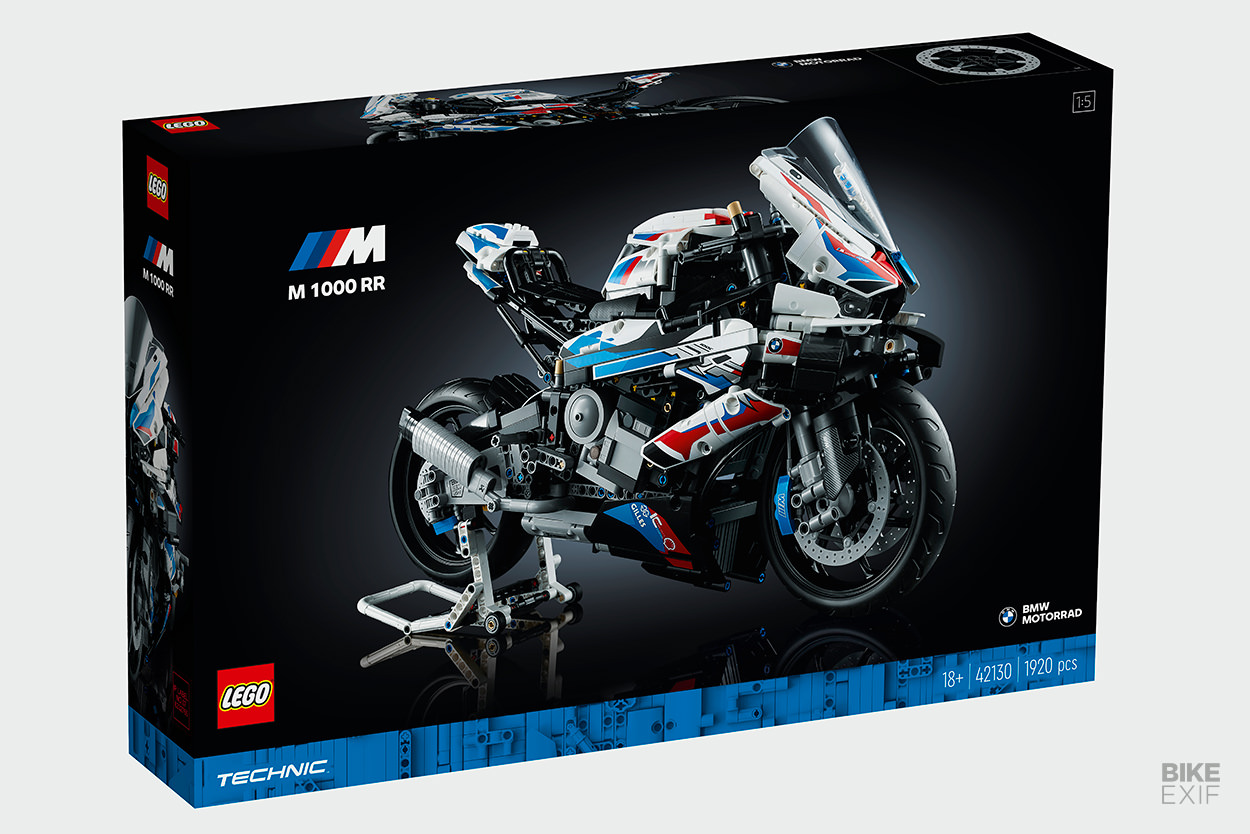 It has that many pieces, because the attention to detail is ridiculous. Not only does it have suspension that goes up and down, but it even includes a functional gearbox, with three gears and neutral. There’s a gold colored chain too, and three different display options for the dashboard.

The Lego Technic BMW M1000RR comes with its own paddock stand and display plate too. Because, let’s face it—once you’ve finally completed this build, would you really want to do it all over again? [More] 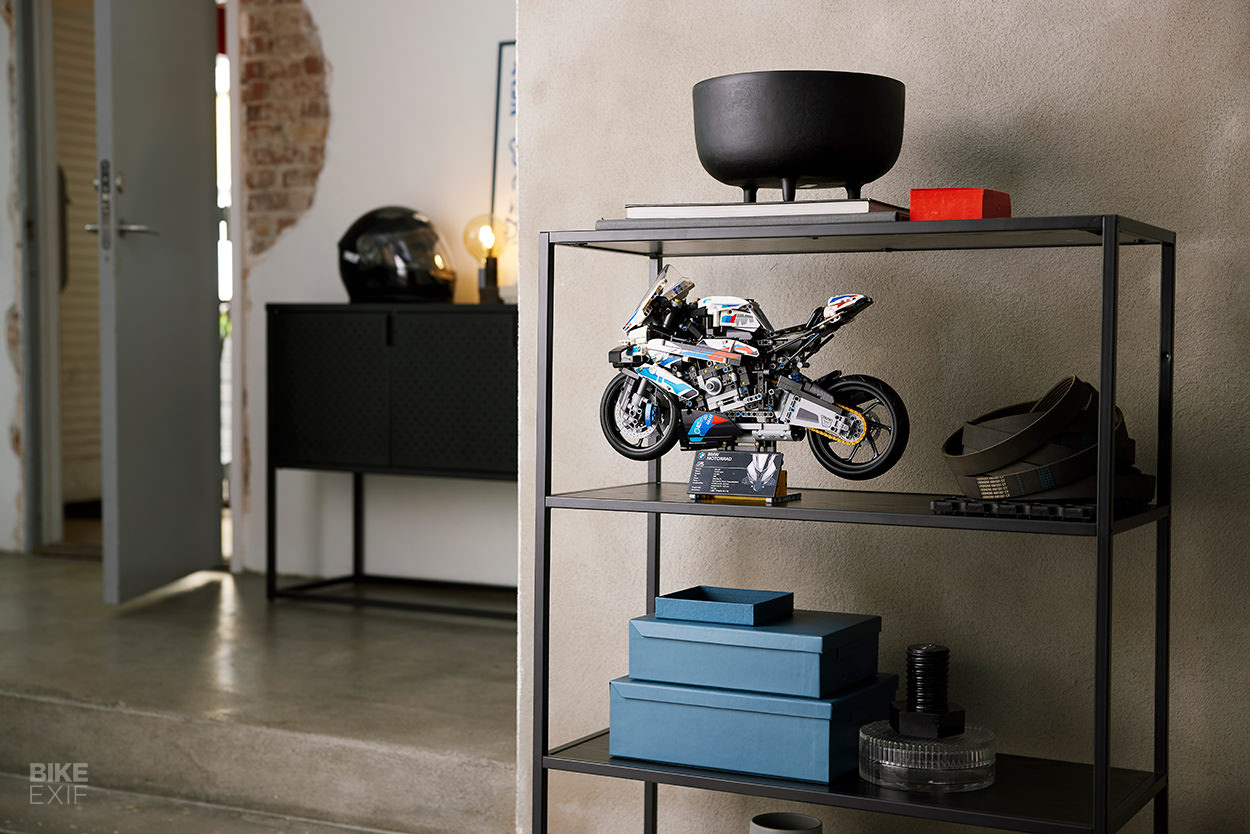