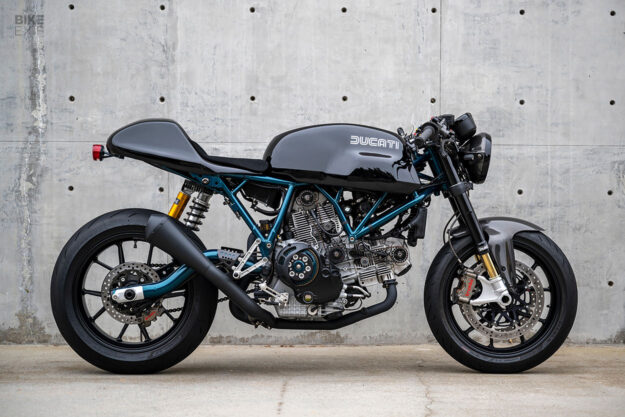 Like any good factory café racer, the Ducati SportClassic doesn’t beg to be customized. It’s stunning in stock form—and, with a 992 cc Desmo L-twin mounted in its trellis frame, has more than enough go to match the show. Little wonder then that it’s so sought after on the second hand market.

If you do manage to get your hands on one, you could happily leave it as is—or personalize it with a few select mods. Or you could follow Jeff Soucek’s example. His SportClassic looks almost original at a glance, but it’s actually packing more mods than your garden variety café racer. 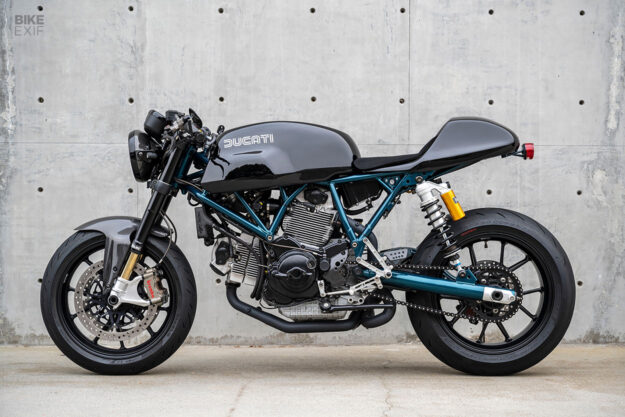 All you need to know about Jeff is that he’s based in California, loves Ducatis and has a background in aerospace engineering. He bought his 2006-model SportClassic in 2010, and has been improving it ever since—making subtle visual tweaks and dialing the performance up to eleven.

Jeff likens those tweaks to salt and pepper on a great steak. “The best steak I ever had was in Kobe, Japan,” he explains. “The chef was quiet and extremely deliberate in his presentation, and when the steaks came out, he simply added a dash of salt and pepper, touched it to the hot iron for three seconds, then served it.” 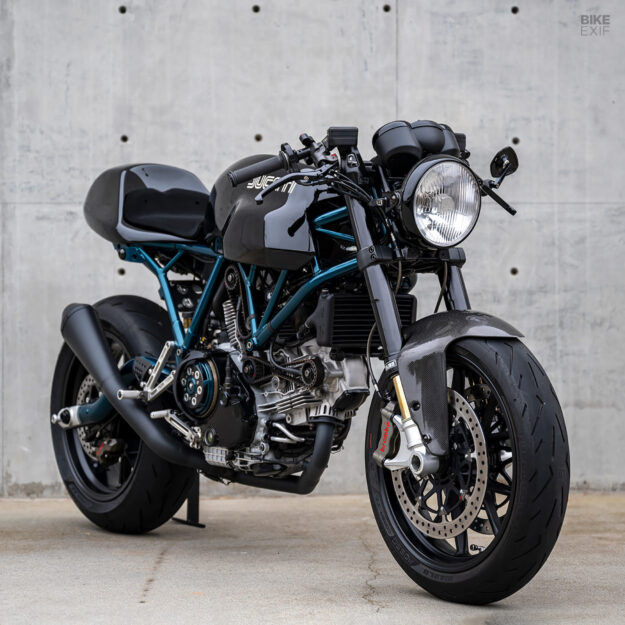 “It wasn’t covered in sauces, and garnish—just an empty plate with the steak front and center. It was unlike anything else I ever had.”

“This is how I have always seen the SportClassic—a beautiful masterpiece that only needs a little enhancement to bring out the near perfection. My direction in building this bike was to keep the lines, design and the flavor how it came, and bring that front and center instead of overshadowing it with aftermarket bolt-ons, crazy colors or stand out trophy parts.” 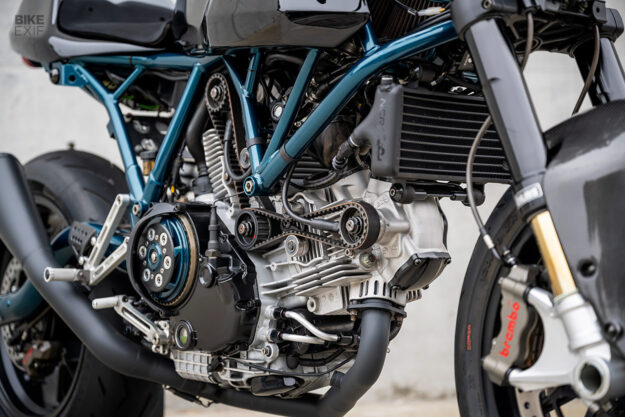 Jeff’s SportClassic is a true sleeper, starting with its motor. It’s been bored out to 1,080 cc courtesy of DucShop in Georgia, with ported heads by CR Axtell. Inside you’ll find Carrillo rods, DP cams, an alloy flywheel, and a lightened stage three crank from Ben Fox. The intake and exhaust valves are bigger, the intake runners have been ported, the throttle bodies have been modified and the intakes are new.

Other upgrades include alloy belt pulleys and an EVR slipper clutch. The bike’s also been tuned with a Microtec ECU and dual lambda controller. It now puts out 104 hp and 97.6 Nm—13.3 and 6.4 more than before. 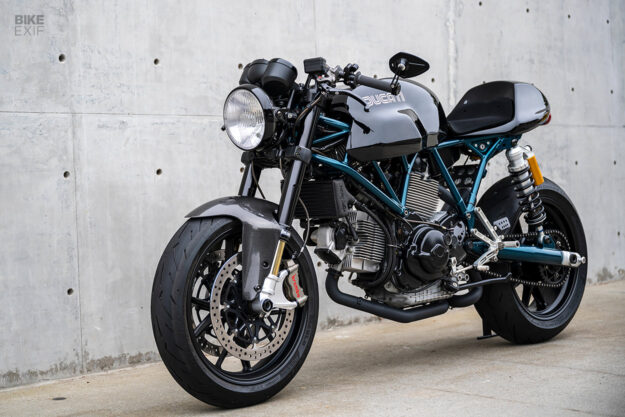 Up front are a set of blacked-out Öhlins forks, with the Öhlins rear shock sporting a matching black spring. Keen eyes will notice that the SportClassic’s spoked wheels are gone. In their place are a set of cast hoops from a Ducati 999, with custom billet aluminum tensioners out back. 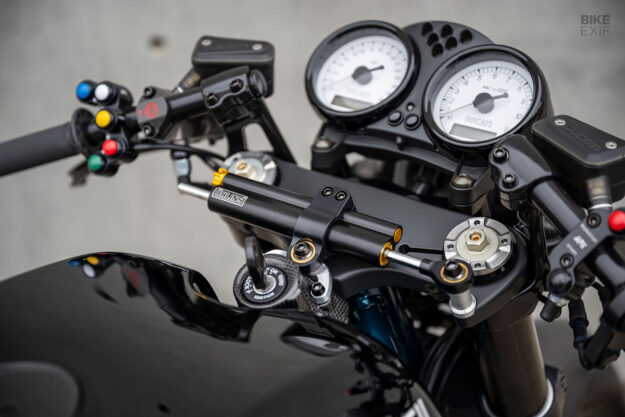 Up in the cockpit are an Öhlins Blackline steering damper, and raised clip-ons from a Ducati ST3, fitted with racing-style switches and a single Motogadget mirror. Also present are a carbon fiber headlight bucket, and a carbon fiber front fender.

The lighting setup is completed with stealthy Motogadget LED turn signals, and a custom-made taillight that uses an 80s Bultaco lens. Lower down are an NCR oil cooler, NCR rear sets and a blacked-out exhaust system with a Spark muffler. 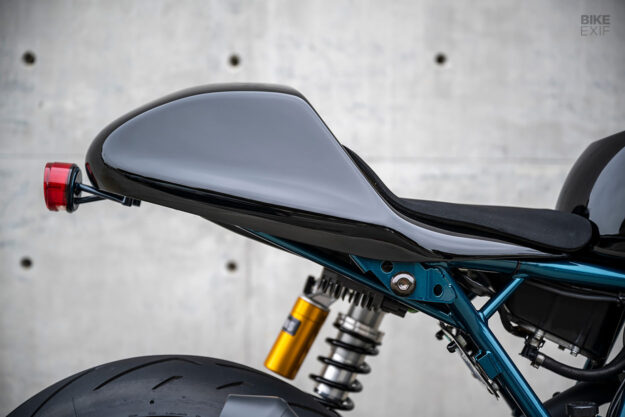 All of the cosmetic changes are subtle, but they’ve had a big impact. If the SportClassic does have a weak spot, visually, it’s its slightly-too-chunky saddle. Jeff’s fixed that by fitting a slim tail section from Airtech Streamlining, and capping it off with a neoprene racing pad.

The real genius here is in the bike’s new livery. Jeff’s kept it simple with a jet black body and a candy turquoise frame. They’re colors that Ducati has previously bestowed on the SportClassic, but never together—and they feel just that bit more classy than the factory offerings. 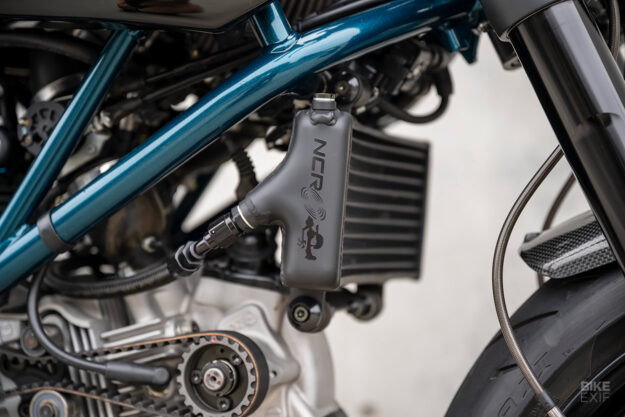 Beyond the paint, Jeff’s gone to painstaking lengths to make sure that each finish complements the next. He’s used either titanium or black re-plated fasteners throughout, and a bunch of parts have been treated to black Cerakote or powder-coated finishes, in various levels of matte and gloss.

Every detail is subtle, and nothing screams for attention. Jeff’s even touched on small details—like redoing the speedo housing in black, and treating the oil cooler to a matte finish with contrasting gloss logos. A few bits of carbon fiber trim add just the right amount of flair. 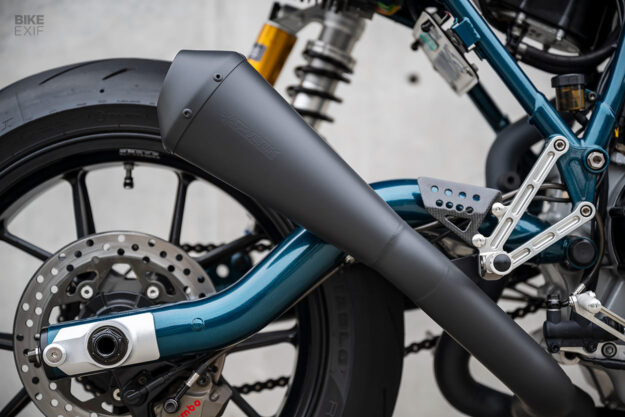 Jeff’s SportClassic might not be as visually radical on the outside as some custom examples we’ve seen, but we can’t stop staring at it. Tasteful and restrained, it exemplifies the virtues of the modern classic.

And in case you’re wondering, yes: Jeff rides it regularly, on the track and on the street. 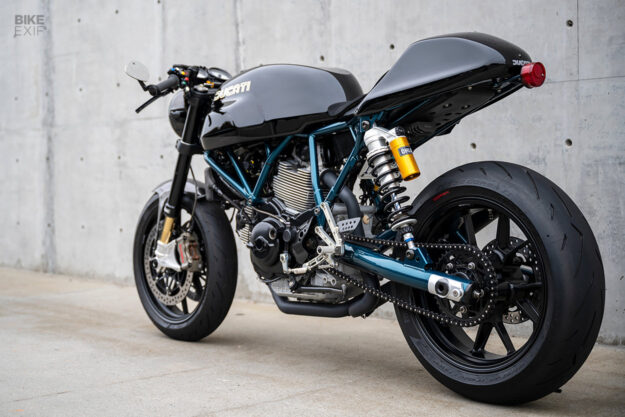