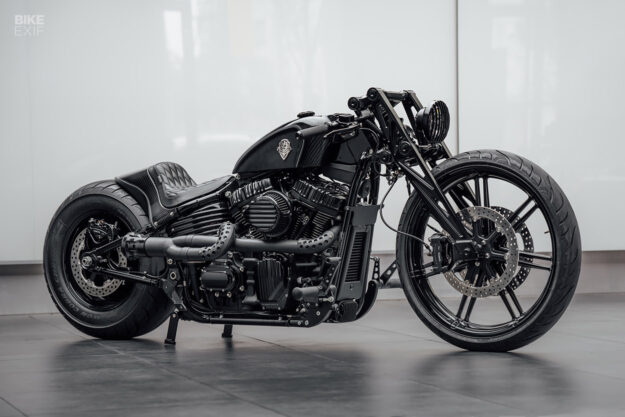 Don’t get us wrong; Winston’s Taipei, Taiwan-based shop has turned out some bright builds in its day. But you can count them on one hand. We wouldn’t have it any other way though, and apparently his customers feel the same—which is why he repeatedly gets orders for “Rough Crafts style” builds. 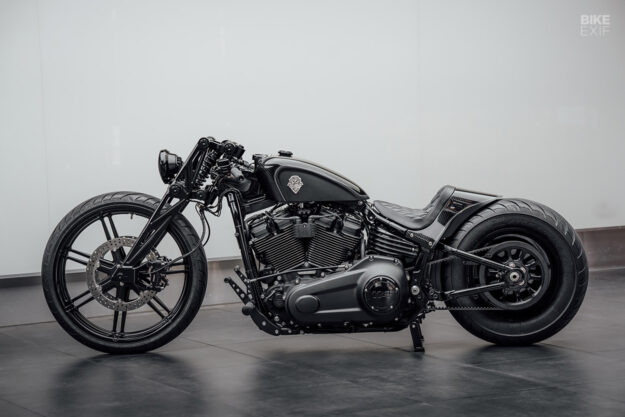 “People are always curious about how we build a bike that’s never been done, for a customer that doesn’t necessarily know how to describe what they want,” Winston tells us. “This time the task was very simple: the customer loved our World Championship bike, ‘Stealth Bullet,’ but he wanted something more extreme, more exaggerated.”

Take a glance at Stealth Bullet, and you’ll understand that these two bikes are cut from the same cloth. They share the monochromatic black treatment that Rough Crafts has become known for. And they both make the most of such a limited palette, combining a diverse assortment of hues, textures, and finishes. 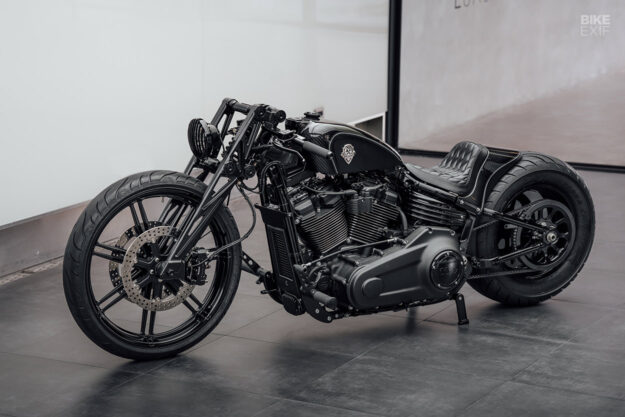 They also share an instantly recognizable sampling of custom parts that could only come from the Rough Crafts catalog. Deep, dark fins adorn everything from the headlight cover to the rocker boxes, and their menacing uniformity looks like something pulled straight from an H.R. Giger exhibition. The influence is clear, but the bikes are vastly different if you know where to look.

Asphalt Glider’s suspension is a prime example of this. Like the bike that inspired it, it wears a girder fork up front. But this particular girder is nothing like the minimalist version that adorned Winston’s previous show winner. 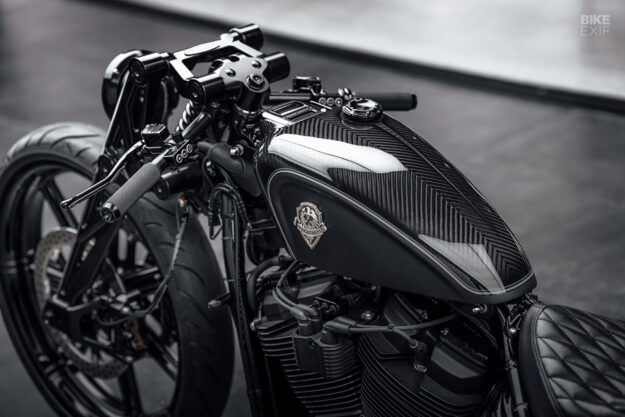 Instead of building something in-house, Winston sourced a complete fork setup from FG Racing—an Italian components brand that specializes in high performance girder designs. The FG unit is made entirely from billet aluminum, and incorporates modern geometry with an equal eye toward performance and aesthetics. 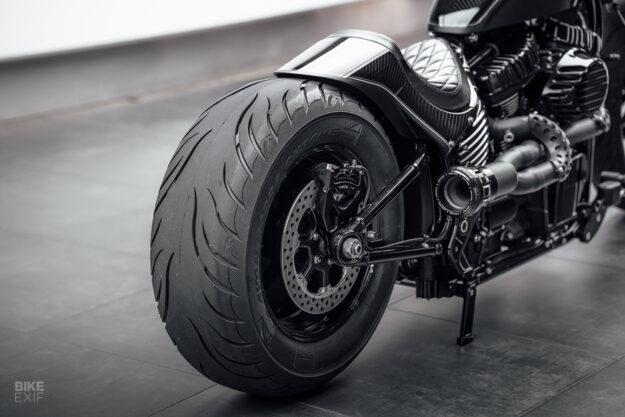 Asphalt Glider’s rear suspension is also a sharp departure from the twin-shock simplicity of Stealth Bullet. You can’t tell by looking at it, but the Softail’s mono-shock has been removed entirely. In its place sits a performance air shock from the folks at Legend Suspension, complete with an onboard air compressor neatly tucked away behind the transmission.

Winston says the option to go with air suspension was born of necessity. He wanted the rear fender to sit as tight as possible, but the bike still needed to ride well out on the road. The Legend unit allows the meaty 230-wide rear tire to tuck neatly inside the fender when parked, but can be raised on the fly for riding with the touch of a button. 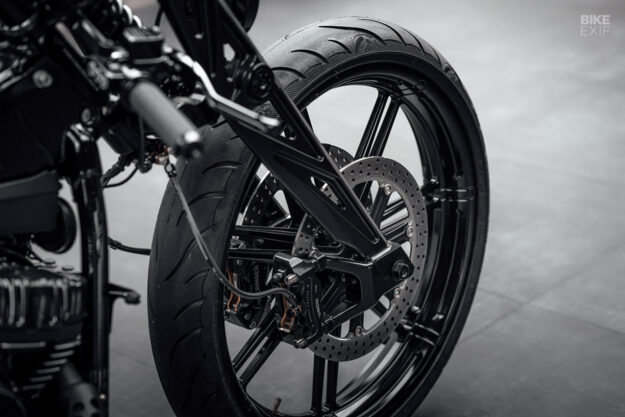 The Breakout’s chunky Avon Chrome tires are wrapped around an unconventional pair of wheels. Out back is a 15” wheel from HD Wheels; a veritable mass of solid metal with a Roland Sands rotor and Beringer caliper nestled tightly inside. Up front, it’s the exact opposite; a massive 23” Arlen Ness wheel appears skeletal by comparison, dominated by the same striking negative space as the girder it’s bolted onto.

The stark asymmetry of the Glider’s wheels give the build just the right “weird balance of visual weight,” according to Winston. Open and stripped down at the front, dense and muscular at the rear; if exaggerated proportions were what this customer wanted, he’s got them in spades now. 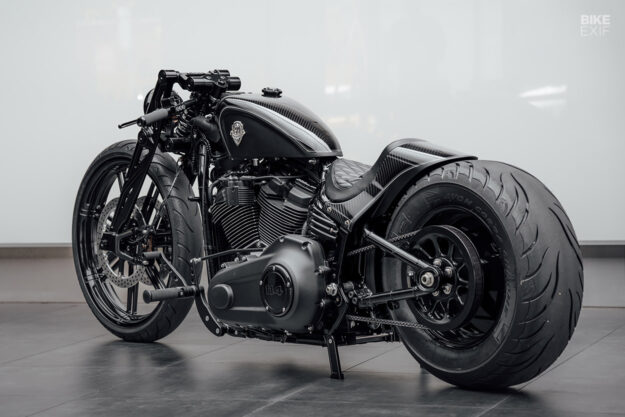 Finishing off the build are a signature Rough Crafts fuel tank, and a deeply scooped tail section. Both are finished in carbon fiber textures, punctuated by subtle white pin striping. Tank badges and pushrod collars from 2Abnormal Sides also adorn the bike.

Winston turned to his Rolodex of regular collaborators to push this one over the finish line. Rover Works Custom Paint handled the paint job, while SFC Simon Fiber Craft took care of the fiberglass and carbon fiber work. Fabrication was done by MS Pro, and CT-Garage did the final assembly. 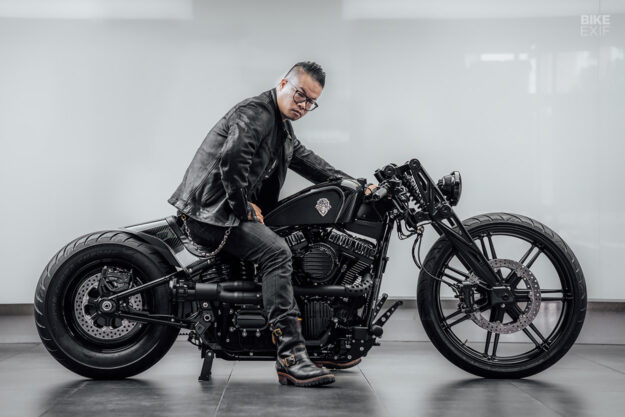 In addition to Asphalt Glider’s striking appearance, the customer had one other specific request: he wanted the bike done “shrimp style.” You might be wondering what the heck that means—and you’re not alone. Winston wasn’t too sure himself at first, but his customer explained that shrimp style means long-reach drag bars paired with forward foot controls.

In other words, the customer wanted to sit low over the tank, legs forward, folded around the front of the bike, resulting in a body position not unlike (you guessed it) a cocktail shrimp. 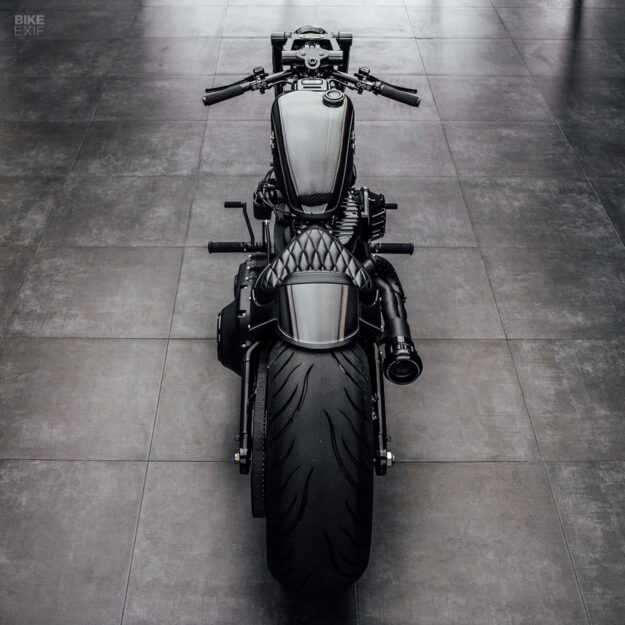 Personally, we prefer the name Asphalt Glider to other potential seafood-inspired alternatives. ‘Dark Shrimp,’ ‘Midnight Crustacean,’ ‘Prowling Prawn;’ none of them quite capture the character of a proper Rough Crafts machine.

But whatever you choose to call this particular rose, there’s no denying it’s pretty sweet.