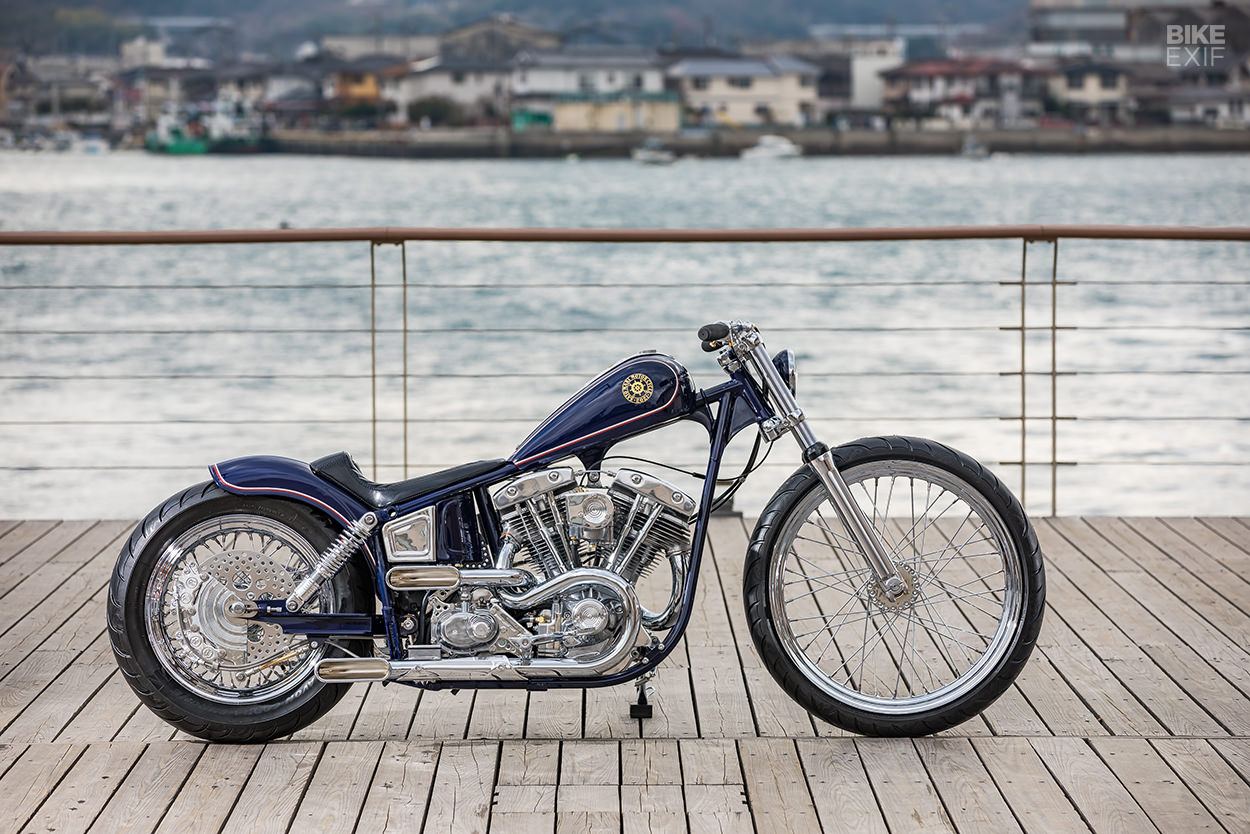 When it comes to vintage Harleys, we prefer a ‘less is more’ vibe. Bikes that are loaded with billet and bling, or sporting airbrushed illustrations on the tank, are just too much for us.

This elegant Shovelhead from Japan is the kind of custom V-twin we love. Stripped back to the mere essentials, it comes from Yusaku Sato of Hiroshima—a builder whose work we’ve featured before, in the days when his shop was known as Sato Marine. 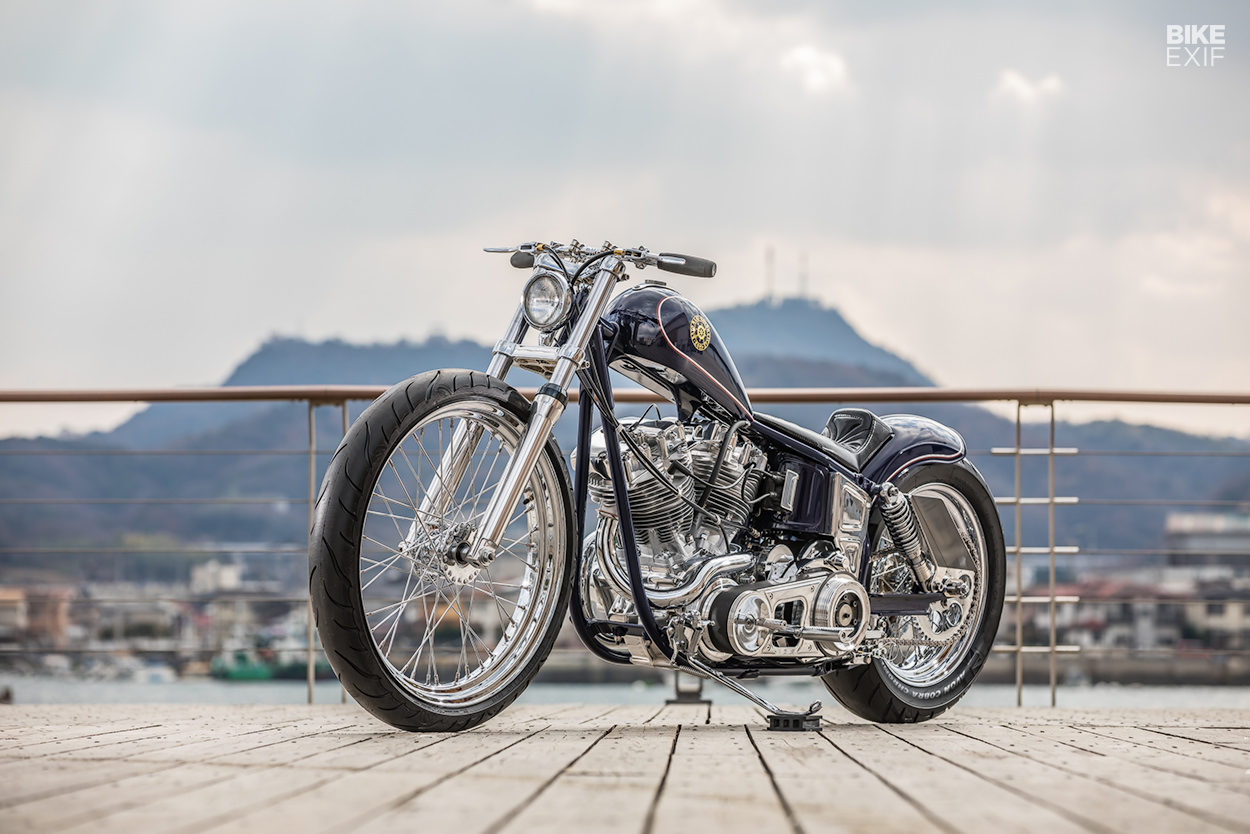 Sato-san and his crew are renowned in Japan for their Shovelhead builds. But this ’82 bike has a more understated vibe than the tracker-influenced ’68 we featured four years ago.

The 1982 date on the engine was the starting point for this build, because that was the year Sato’s client was born. Otherwise, the brief was wide open. “The production side was left to us,” says Sato. 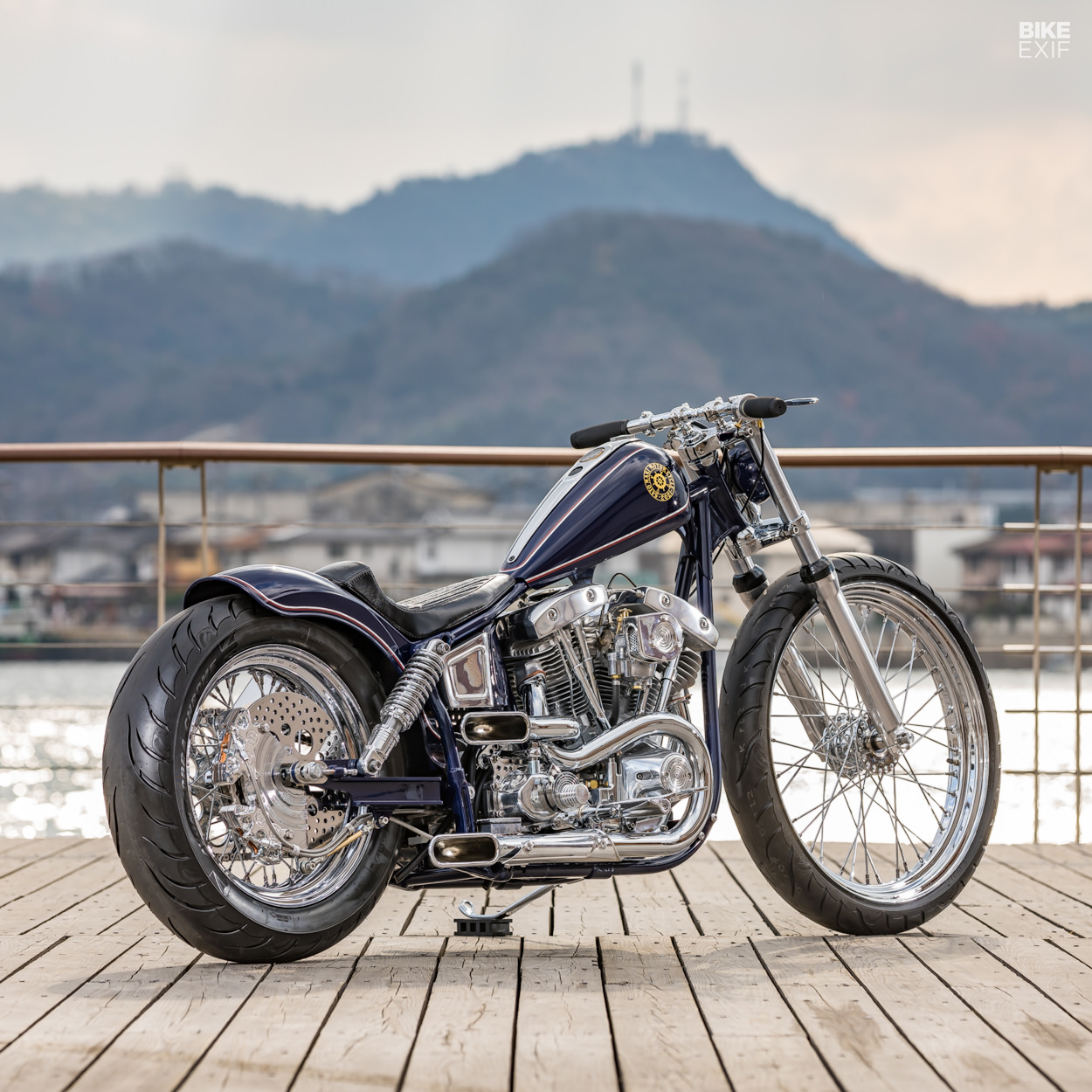 The 80ci V-twin is virtually the only stock part on this machine: the rest is an eclectic selection of parts, married to fine Japanese craftsmanship. The intake system is one such example: hiding behind the custom-fabricated air filter is an S&S Super E carb to extract the best from the reconditioned (and beautifully refinished) motor.

The glorious exhaust system is a one-off from start to finish, with sinuous big-bore headers leading to a pair of unusual rounded-rectangle muffler exits. We’re banking on this one being pretty loud … 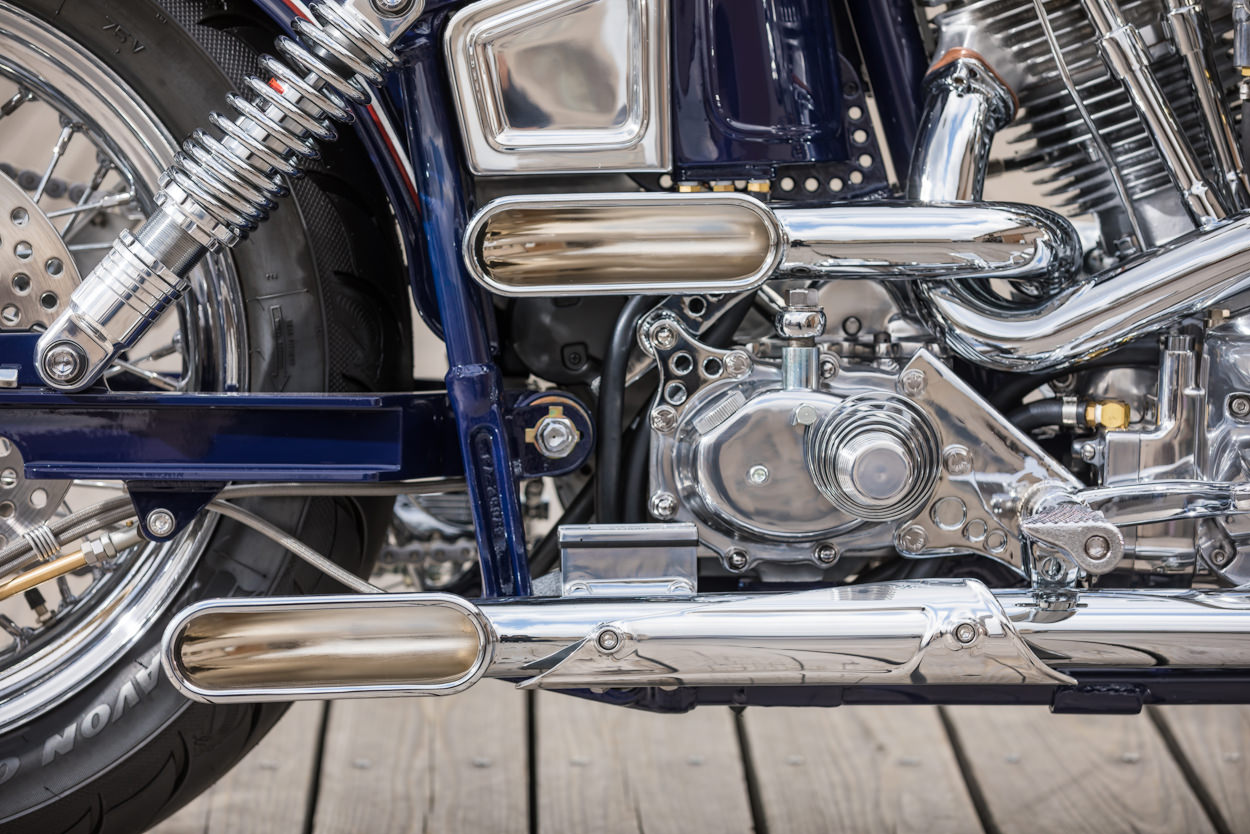 Then it was on to the even harder work—making the frame. “I wanted to get a straight line from the neck,” says Sato-san. The neck itself is fabricated, to mimic cast-type necks, and is hooked up to modified triples and delicately-fabricated bars.

The triples were originally 39mm—presumably from Narrow Glide forks—but are now holding 41mm fork tubes. “It’s narrow but macho, and it goes great with the 23-inch wheel,” says Sato. (The oversize wheel is also sporting a hub machined up in-house.) 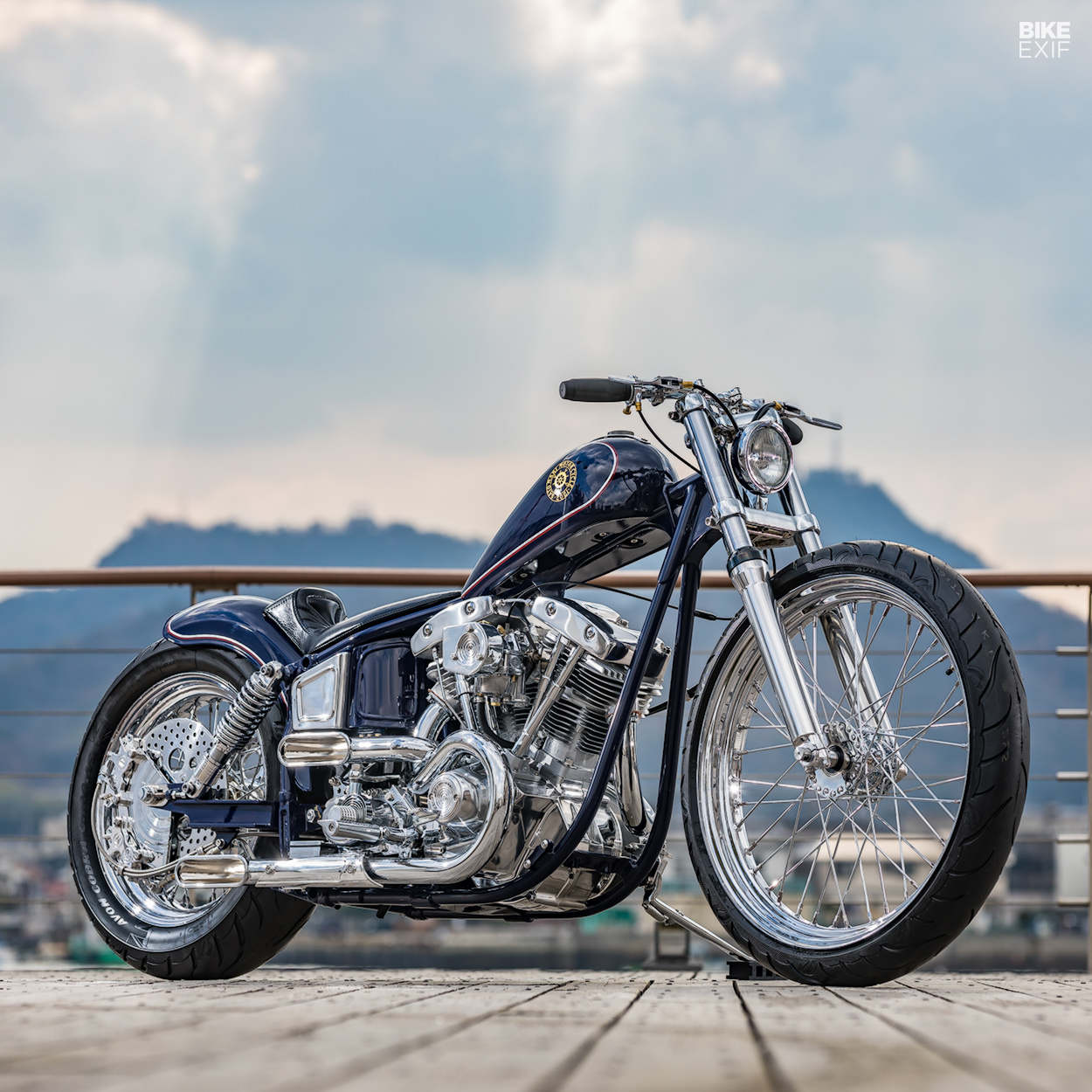 There’s no brake on the front wheel, but Sato has opted for an unusual setup on the 17-inch Dyna rear wheel. He’s used two Performance Machine calipers: one hooked up to the conventional foot control, and the other to the front brake lever.

It won’t be as good as a traditional dual brake setup, but it’ll be an improvement over most customs just running one brake at the back. (It also helps that the tires at both ends are modern Avon Cobra Chromes, rather than vintage rubber.) 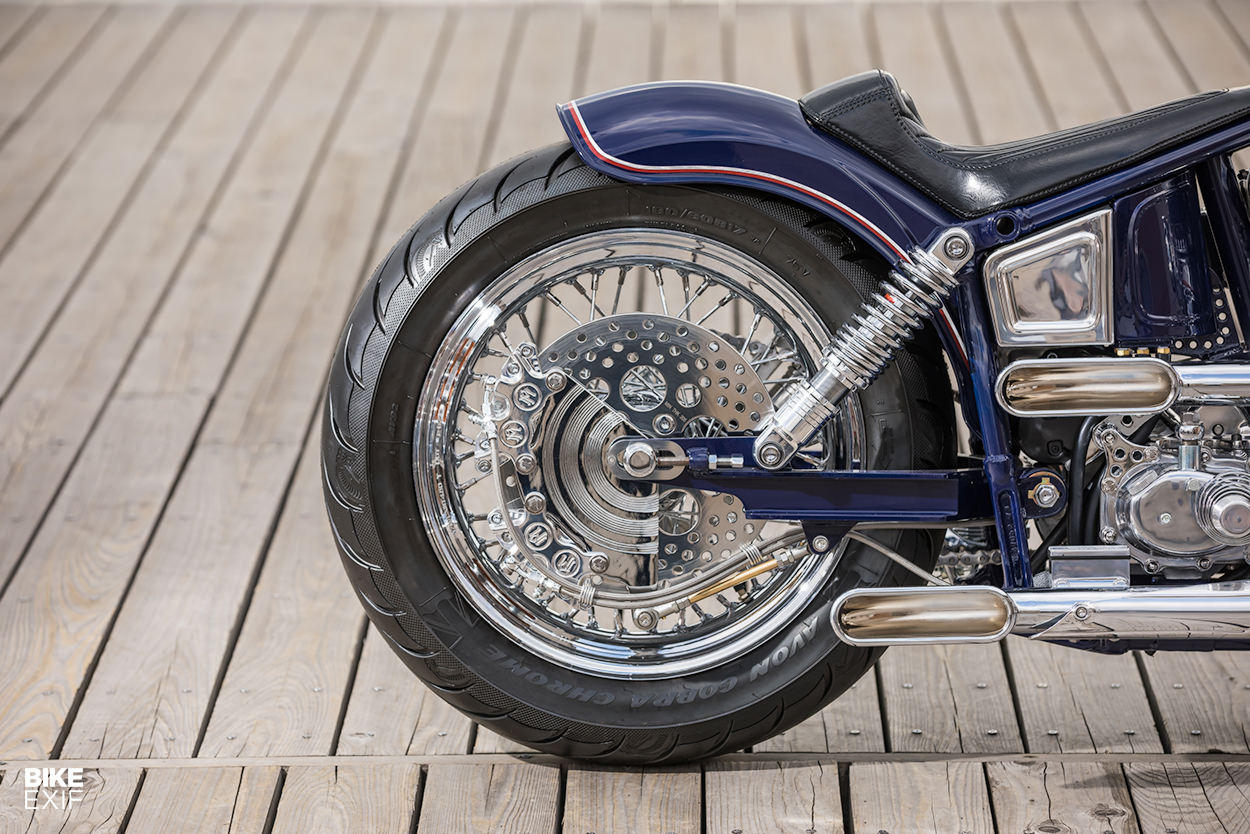 The unusual swingarm is a one-off, and a style we haven’t seen before. Sato wanted an “edgy feel,” he says. All the controls and pegs are one-offs too, fabricated and welded up in the shop.

The compact fuel and oil tanks, and the snug-fitting rear fender, have been hand-hammered out of 1.6mm steel plate. “It took a long time,” Sato says wryly. 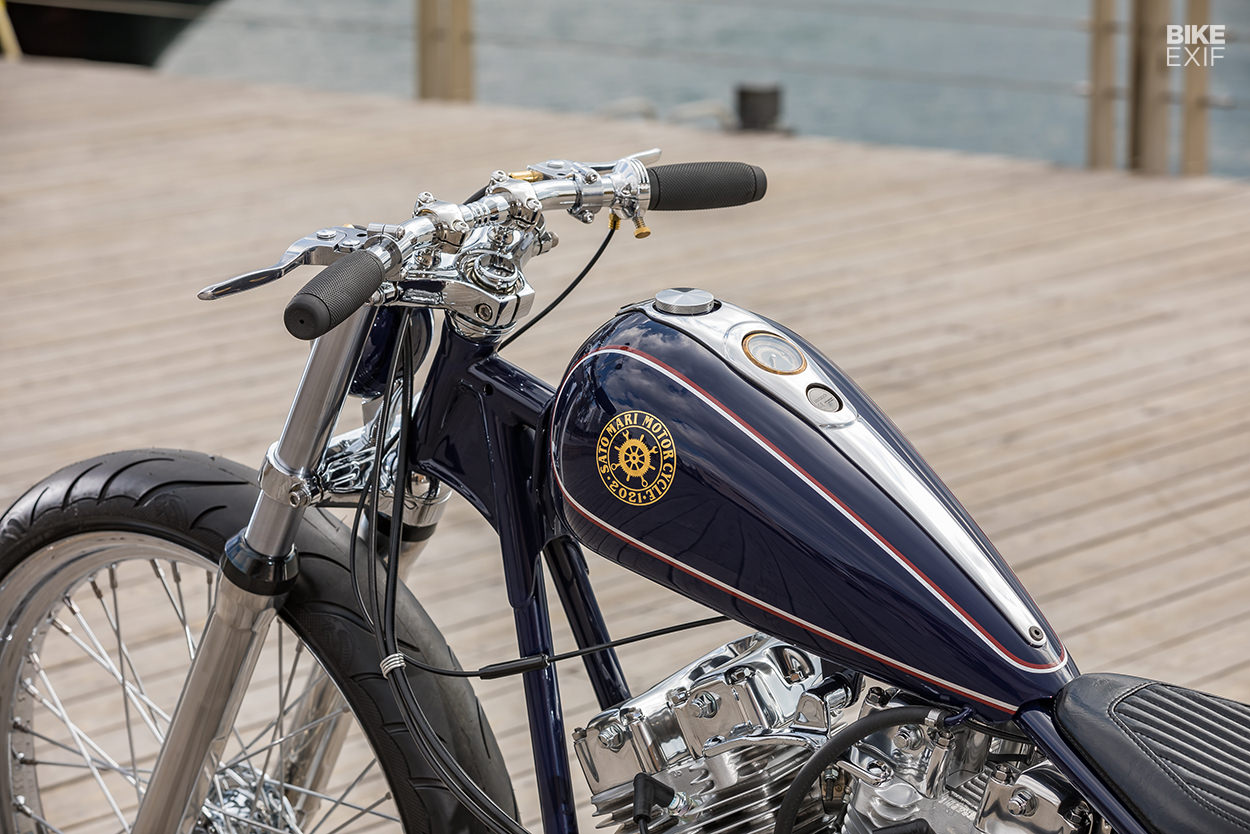 He’s embedded the speedo and ignition barrel in the tank, and used sections from an old Dyna tank as the starting point. The aluminum box alongside the oil tank (under the seat) is removable and contains most of the electrics.

At the huge Mooneyes festival in Yokohama, held last month for the first time in two years, Sato’s Shovel was one of the stars of the show. Which goes to prove that sometimes, what you leave out is more important than what you put in. 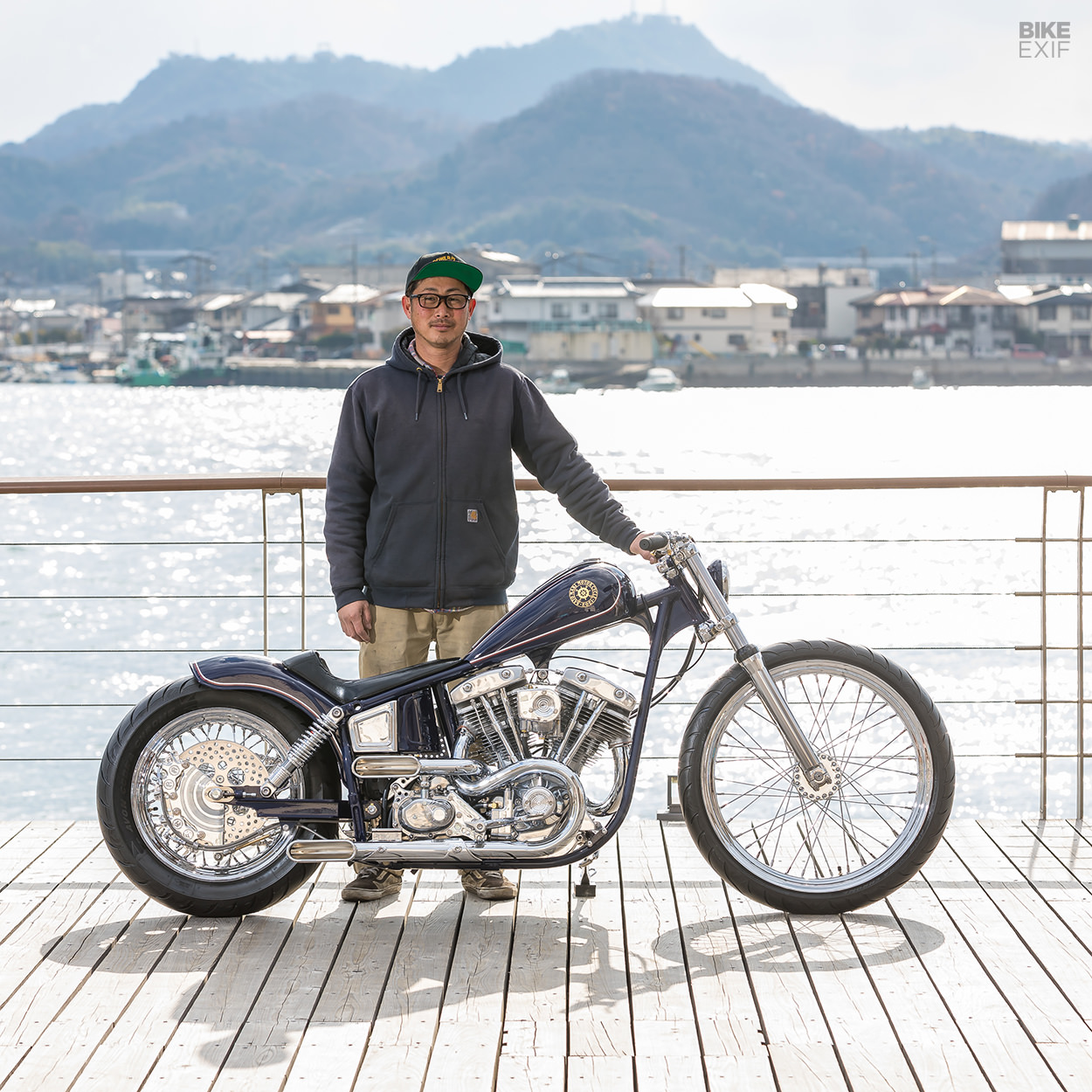