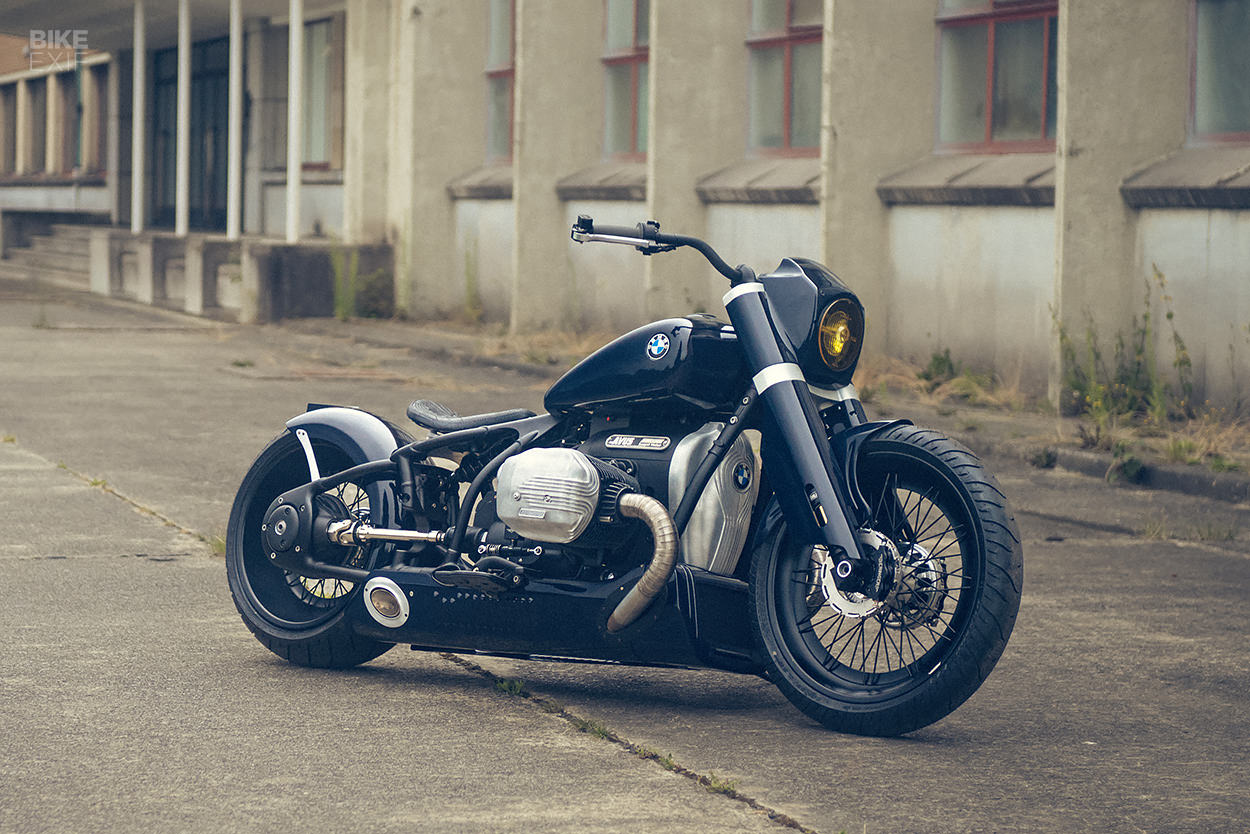 It’s no secret that we have mixed feelings about the BMW R18. But there’s one thing we’re sure of: in the right hands, it has massive potential for customization. And few hands are as deft as Brice Hennebert’s.

We’ve been following Brice’s career for quite some time—from his early days as one half of Kruz Company, to his current work under the Workhorse Speed Shop brand. And the Belgian custom builder has yet to put a foot wrong. 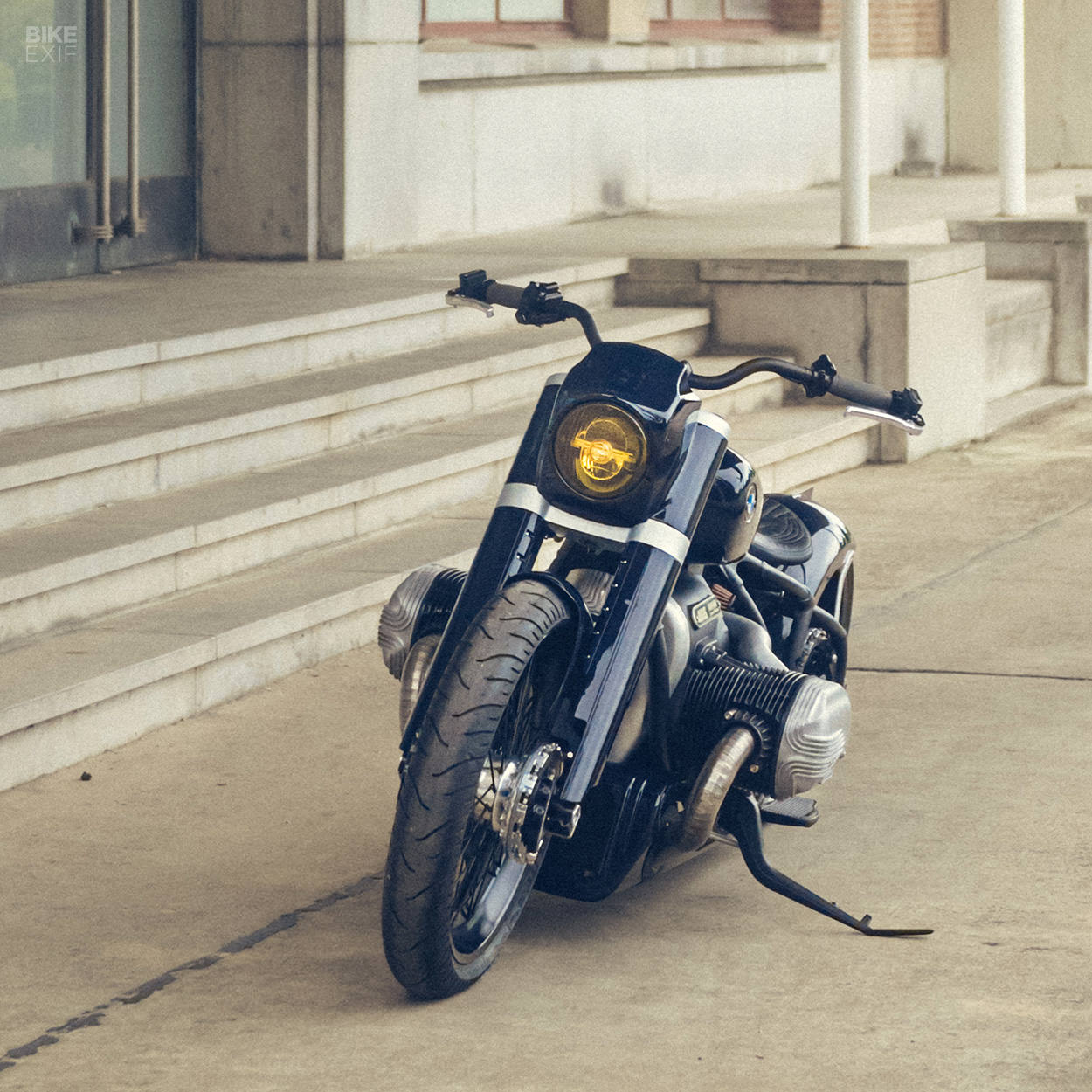 Brice has a sharp eye, and a penchant for injecting retro racing style into his machines. He’s also not afraid to build them chunky, making his style perfectly suited to the R18’s generous real estate. This particular bike is a side-step from his usual fare though, laced with art deco design considerations.

Since the BMW R18’s design was originally inspired by the BMW motorcycles of the 1930s, Brice went on the hunt for inspiration from this era. “I wanted to bring the R18 to a whole new level,” he says. “One of my biggest inspirations was the R18 concept bike, which, for me is one of the best looking R18s to date.” 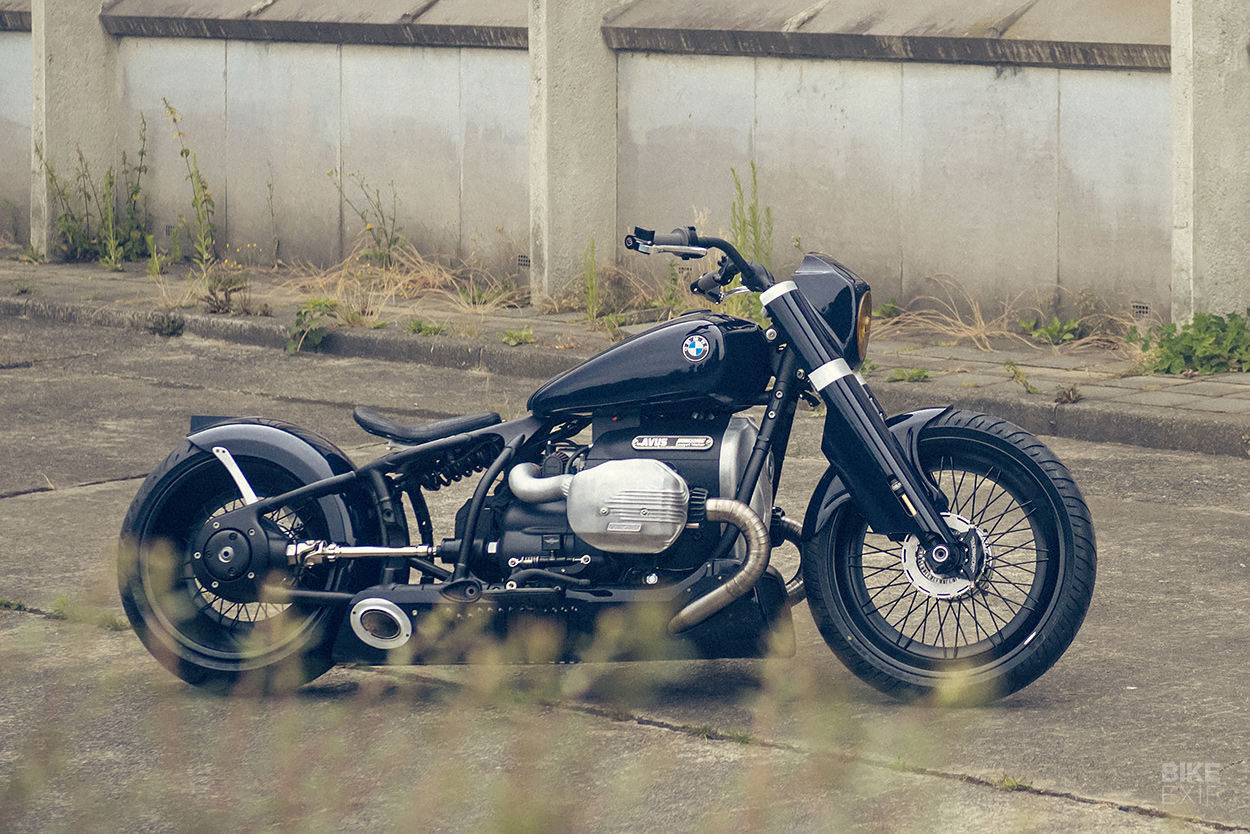 While relaxing at home, Brice stumbled across a documentary about the old AVUS circuit in Berlin—a road that was specifically designed to function as both a freeway and a race track. Since the R18 is built in Berlin, it felt like the perfect springboard for the project.

So Brice started gathering furniture, architectural and automotive designs from the era to build his mood board. “I based my design on two famous sports cars from this period,” he says. 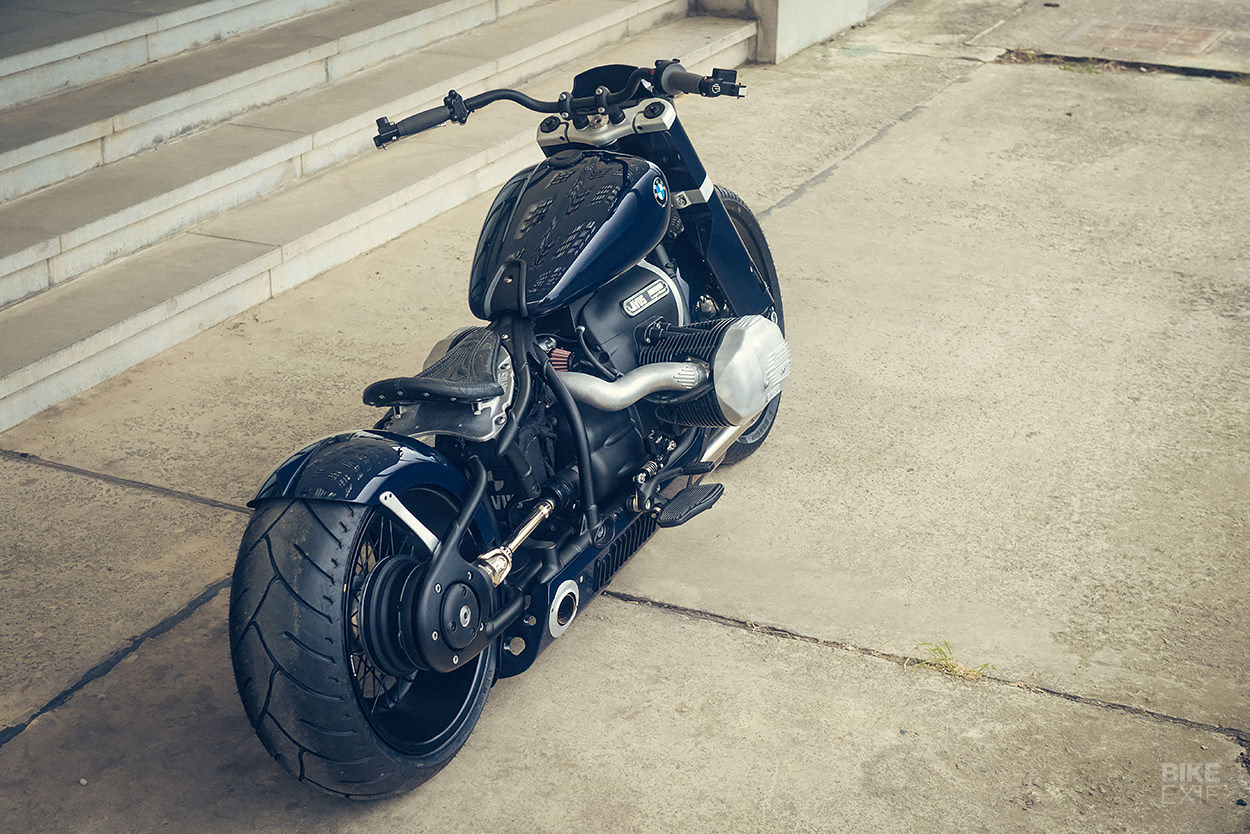 “The first one is the Bentley Blue Train from 1949—a high-end racer, famous for being faster than a train. The three seater is a real piece of art.”

“The other one is the Rolls-Royce Phantom Jonckheere Coupe from 1935. The outrageous lines of the Rolls-Royce are so inspiring. I fell in love with this alien which is almost 100 years old, and which was customized in Belgium.” 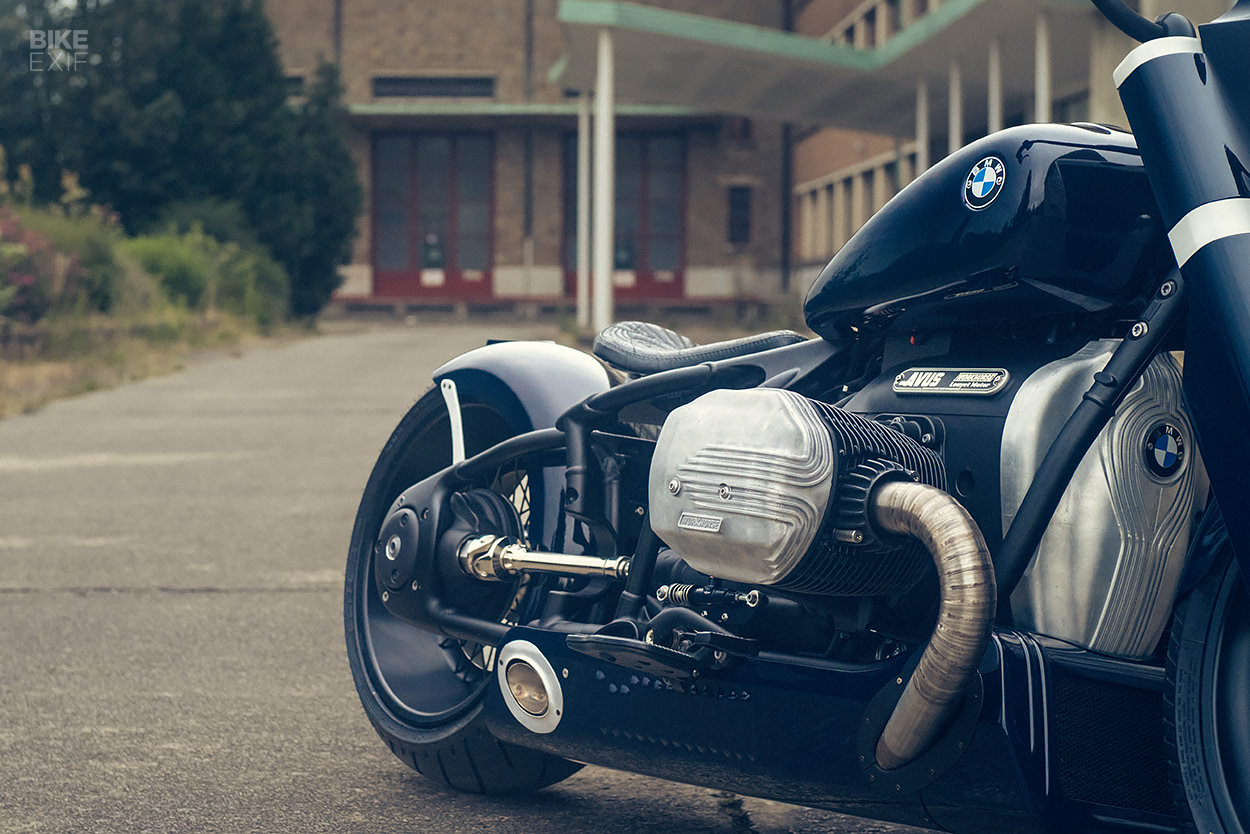 Workhorse’s R18 is squat and compact, so it takes a second glance to realize that it’s rolling on a sizable set of wheels. There’s a 21” hoop up front, with a 240-wide 18” rim at the back. “The monster rear wheel does not look oversized with such a big engine,” says Brice.

Look even closer, and you’ll notice that the spokes are laced either side of a central ridge on each rim. That design was inspired by aero bicycle wheels, and, by Brice’s admission, Max Hazan’s twin-engined Velocette. So it’s no surprise that the wheels are custom units, made to spec by JoNich Wheels in Italy. 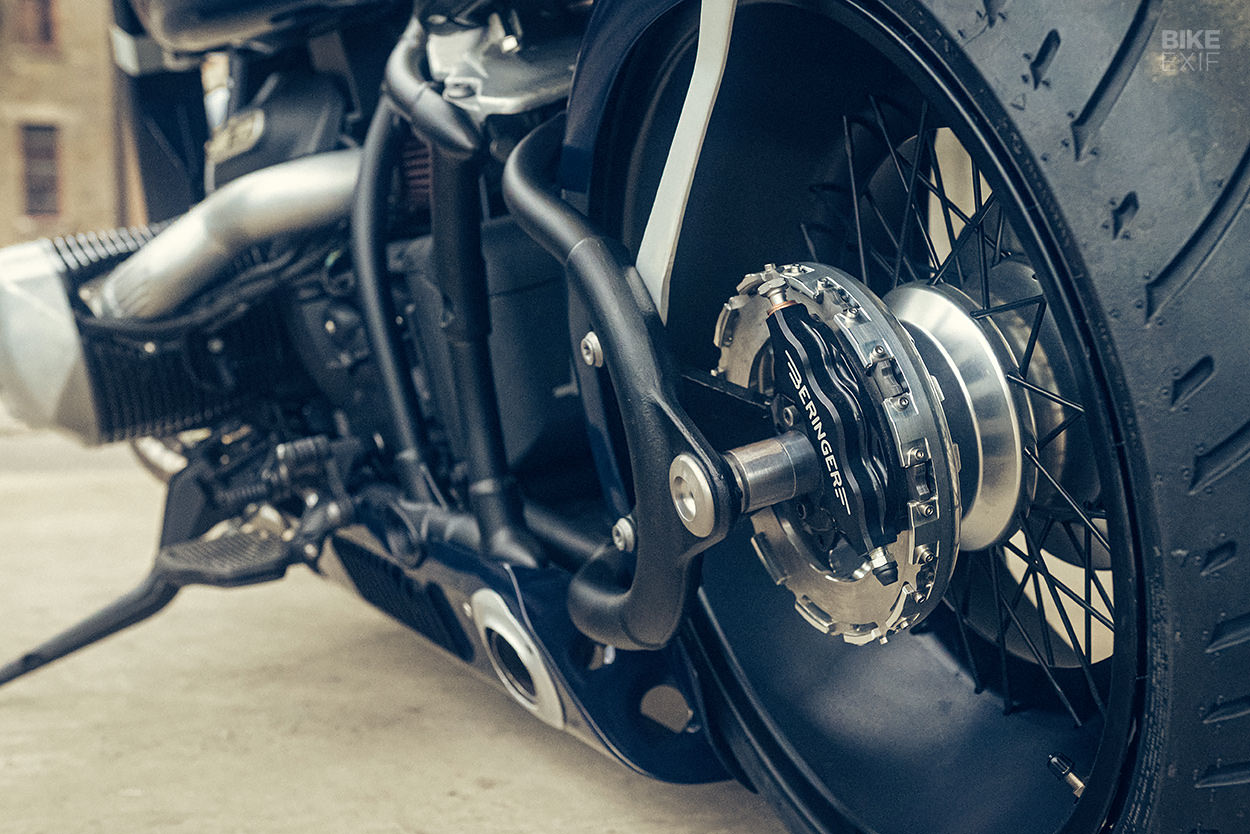 It’s not just the rim edges that are unusual. Brice wanted to keep the design clean, and that meant using an inboard brake set from Beringer. The brake company sent over CAD designs of an existing inboard system, which were passed onto Fabio at JoNich to make sure the new hubs could accommodate the brakes.

Beringer in turn made modifications to the inboard system, to ensure there would be space to re-install the BMW’s OEM ABS sensors. That makes this setup about as one-off as you can get. 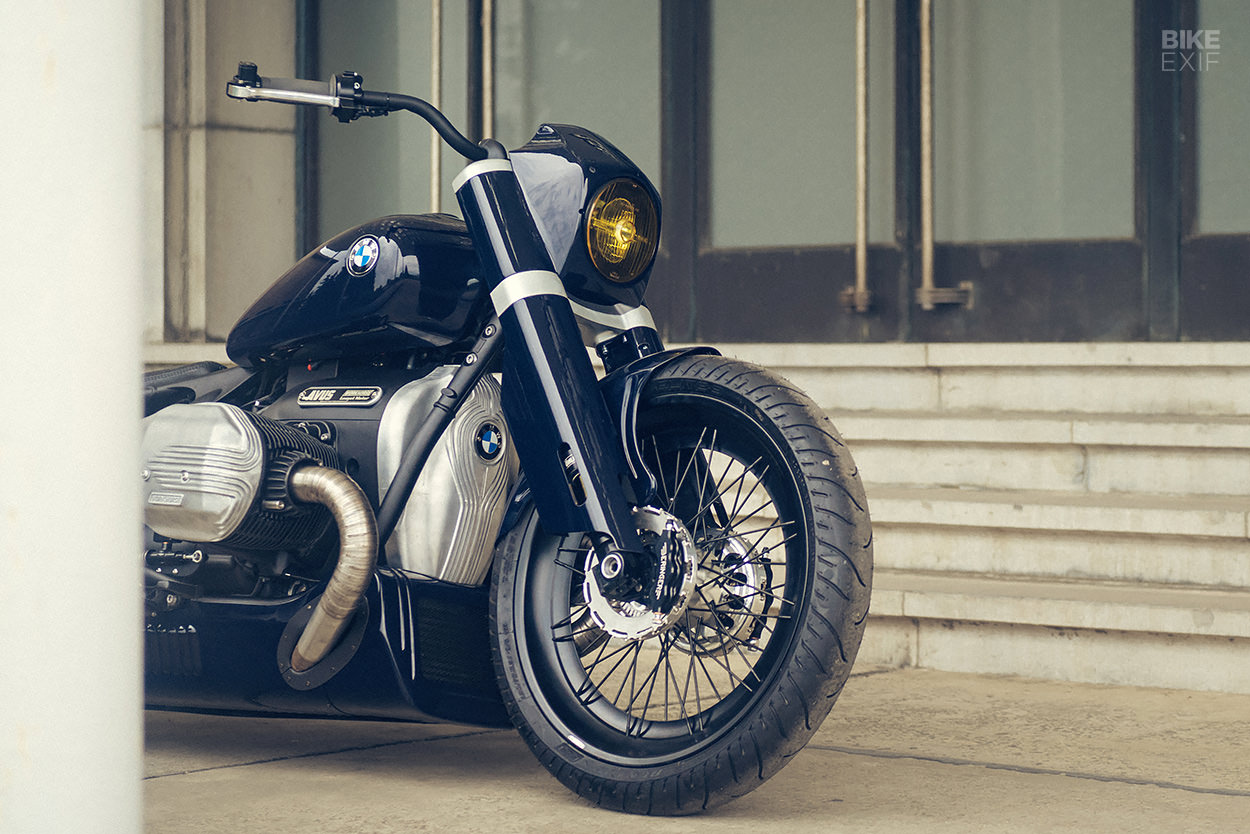 Higher up, Brice designed a new set of yokes to split the forks wide enough to fit the upgraded wheels and brakes. They grip a pair of 43 mm fork legs from Öhlins, with a custom-built shock from the Swedish suspension company fitted out back.

The Öhlins bits are not just for show though. Brice’s client is a hardcore race enthusiast, and although this is a cruiser, he wants it to perform as well as possible. 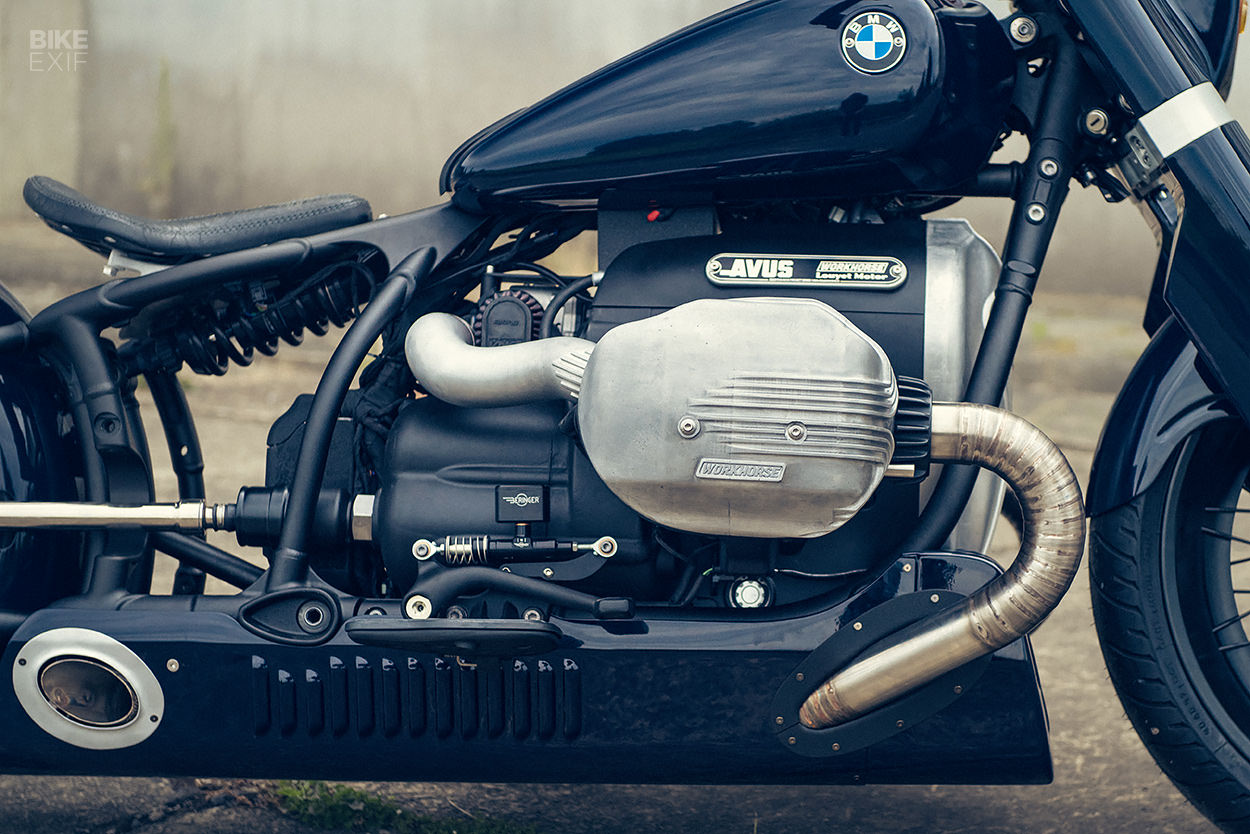 Another challenge was hollowing out the space under the seat, to show off the new shock. “All the usual shit under the seat moved to a black box behind the gearbox,” says Brice, “and there’s some stuff directly under the seat. It took two weeks of work to relocate all the electrical stuff correctly.”

A couple of components also made their way into one of this R18’s standout parts—its generous handmade aluminum belly pan. Brice fabricated an exhaust system from pie-cut headers and pieces of race car mufflers to run inside it, and added louvered vents as a nod to the Bentley. 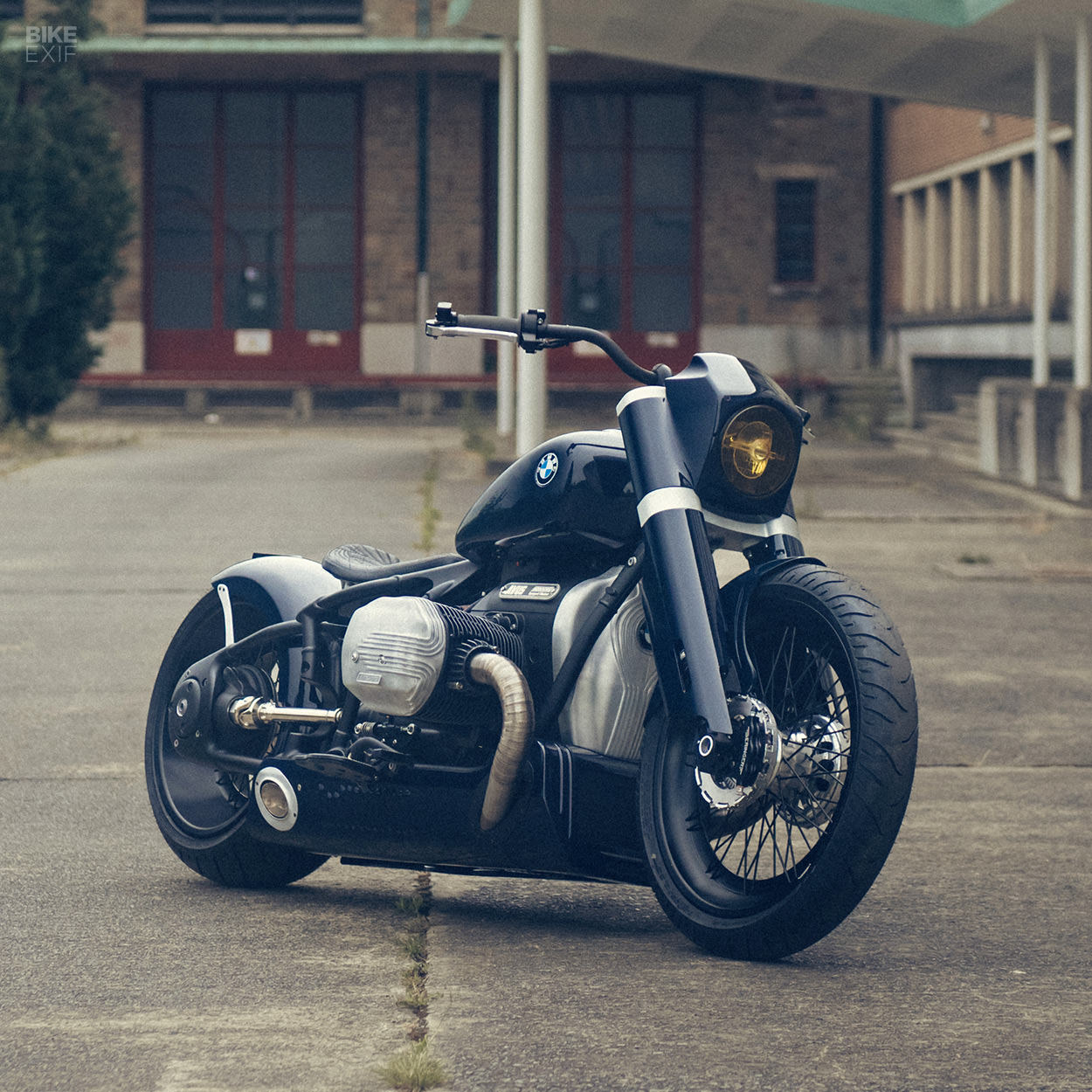 The stock fuel tank made the cut, but a lot of attention went into the cockpit and front end. Using 3D design and printing, Brice built a nylon glass fiber ‘fairing’ with an integrated headlight nacelle and fork covers. Packed inside it is a new old stock SEV Marchal headlight, upgraded with LED internals.

“I took some influence from the Revival Birdcage’s forks, and mixed in some pre-war aero inspiration,” he explains. “There’s also a drop of Hugo Eccles’ XP Zero around the yoke design.” 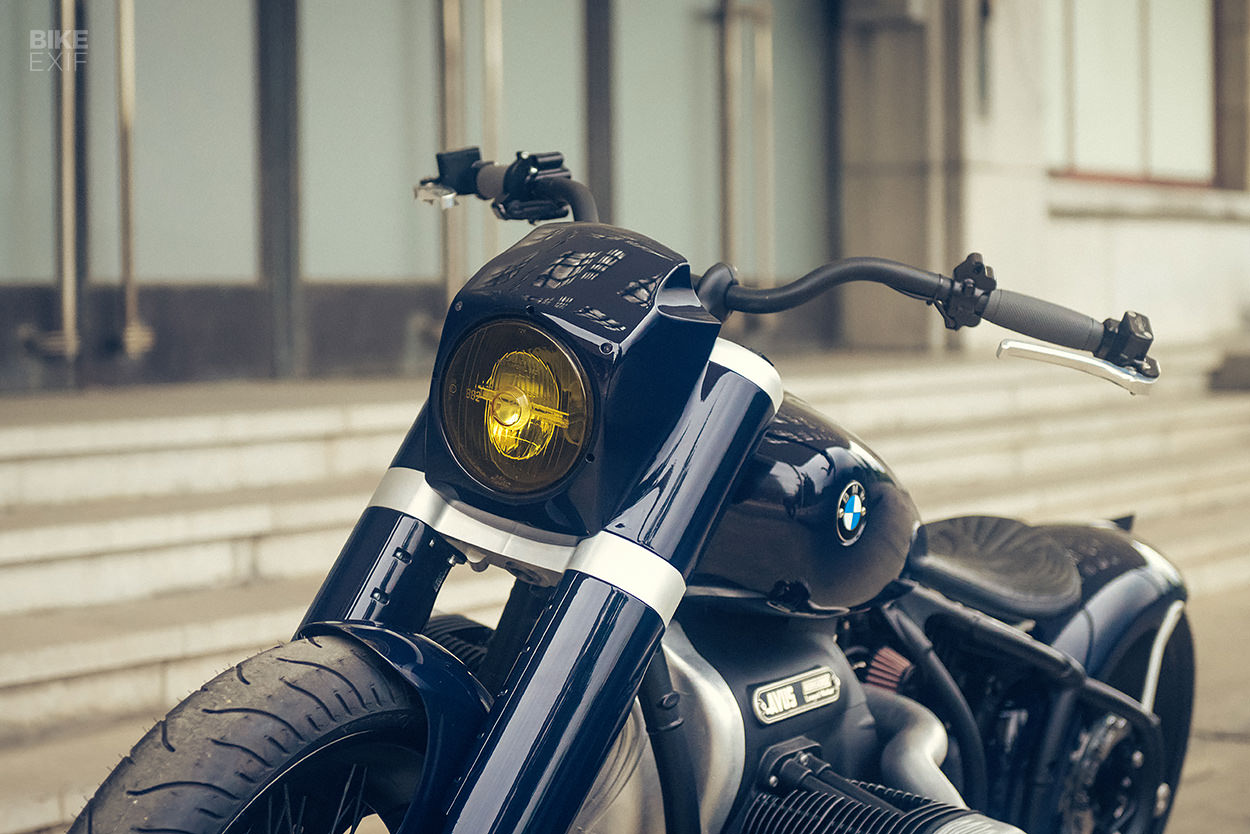 Behind the fairing is a ‘pop-up’ mount for an iPhone—a request from the owner, who apparently wants to run a navigation app since he gets lost often. The switches are custom-made items from Jetprime in Italy, designed specifically to interface with the BMW’s modern CAN bus system.

Also notable are the reverse-style levers, inspired by those on the original Concept R18. Brice put in another call to Beringer, who responded with parts from an old project that was never completed. Brice massaged everything into place, routing the R18’s brake hoses inside the handlebars. 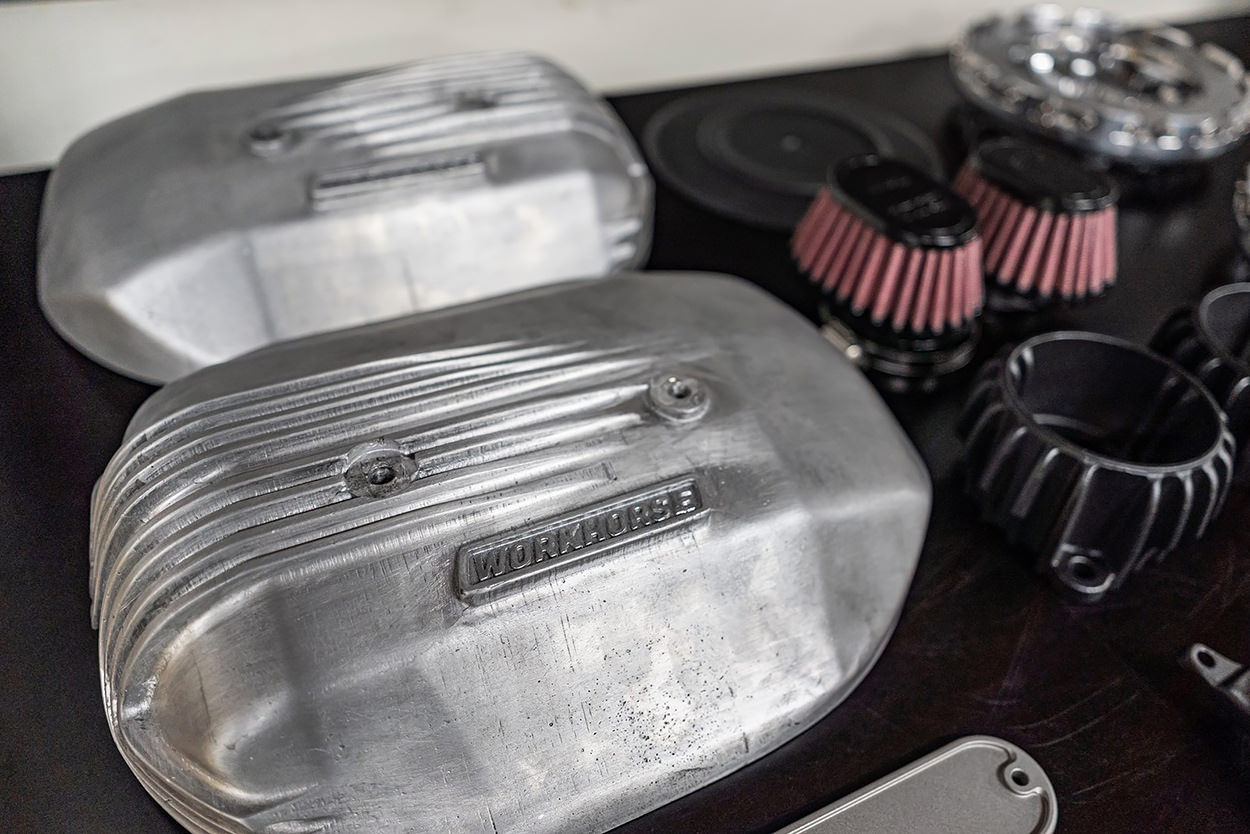 Taking things one more step further, Brice 3D scanned the entire motorcycle, then designed parts like the valve covers, front engine cover, intakes, seat blank-off plate and more. Expanding his knowledge of additive manufacturing, he then 3D-printed castings, for Cedric at Metamagma to cast the final parts from aluminum.

Finishing off the build are a neatly finned rear fender, and a solo seat upholstered by all of Europe’s go-to guy, Jeroen at Silvermachine. Brice also credits Tim at Vinco Racing for doing all the machining work on the build. 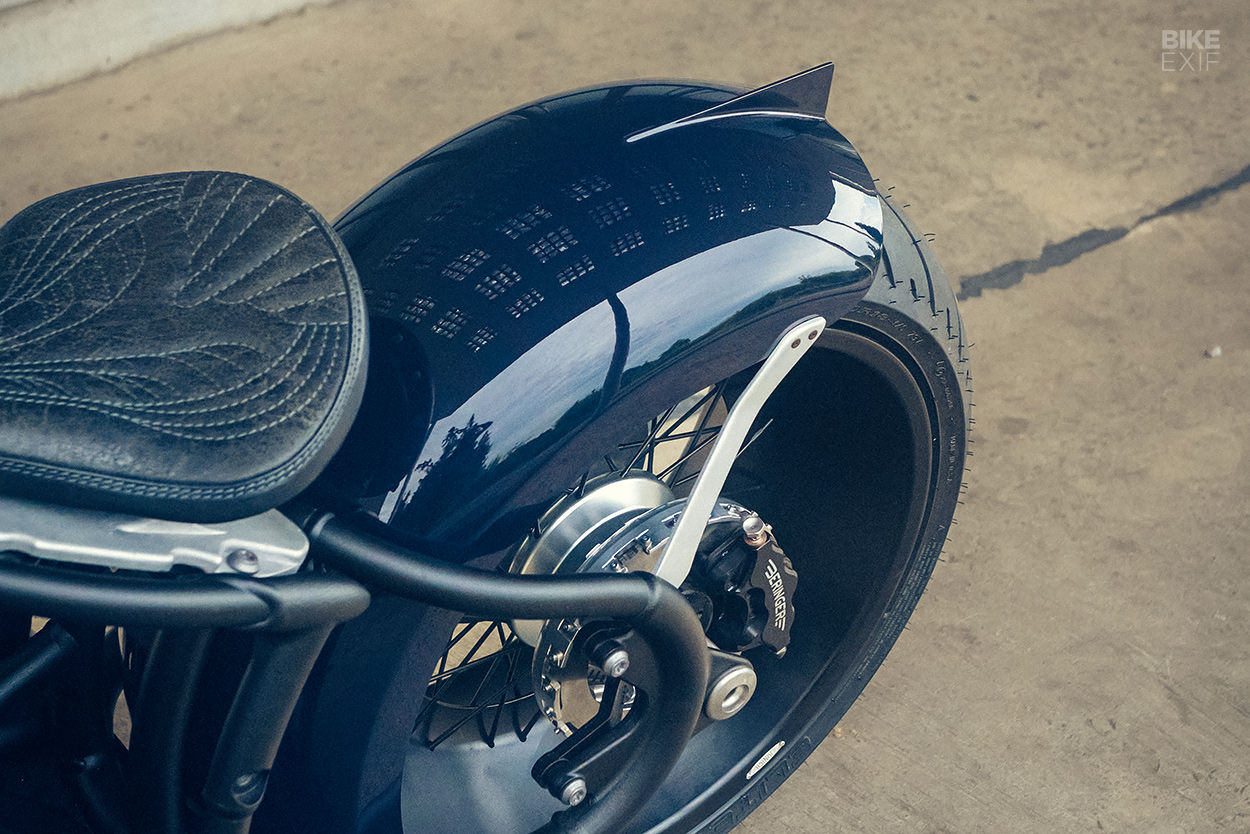 Appropriately dubbed ‘Avus,’ Workhorse’s take on BMW’s monster boxer looks like a forgotten concept design from a bygone era—which is why we love it. If you do too, we have good news: the owner’s given him the go ahead to build a limited series of ten. 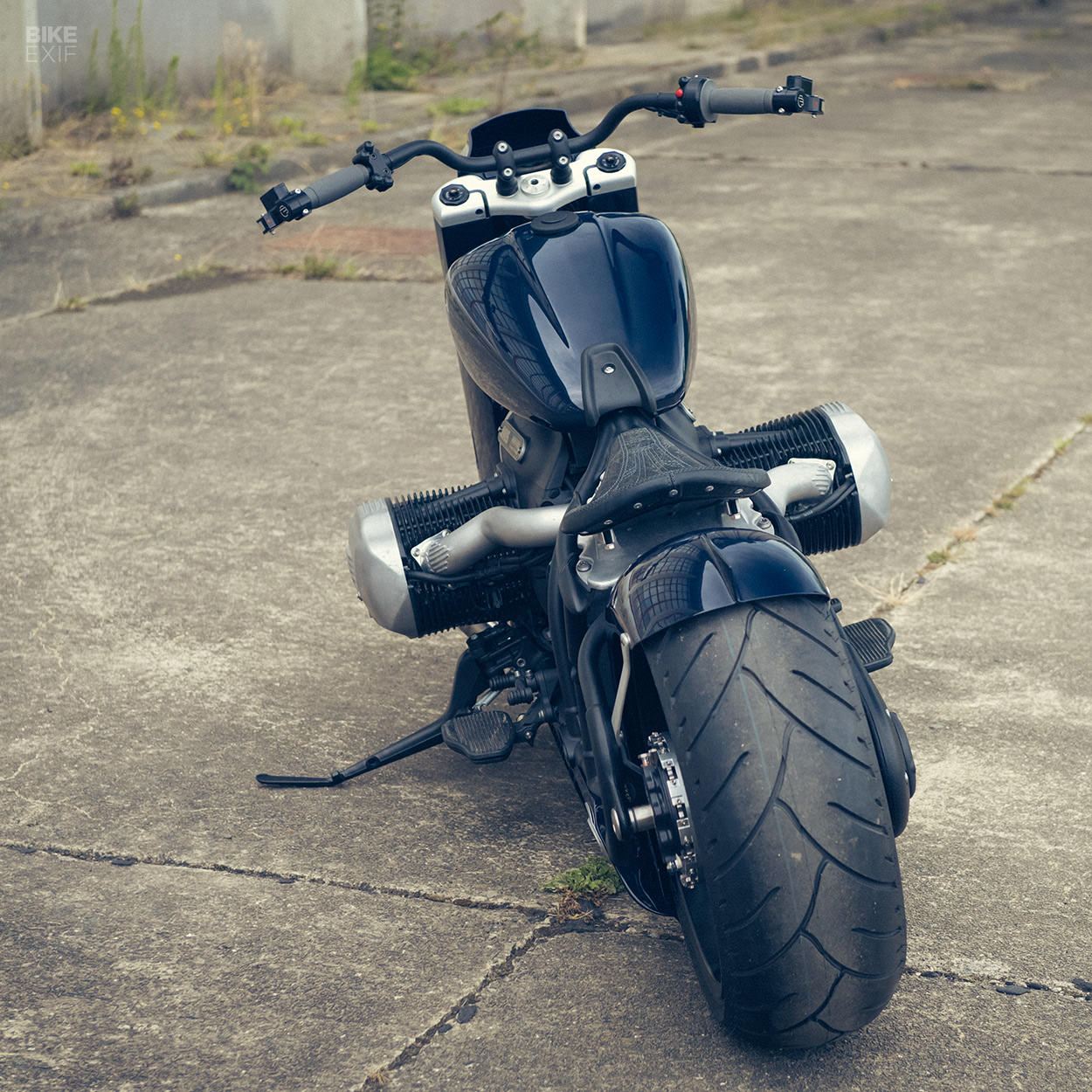