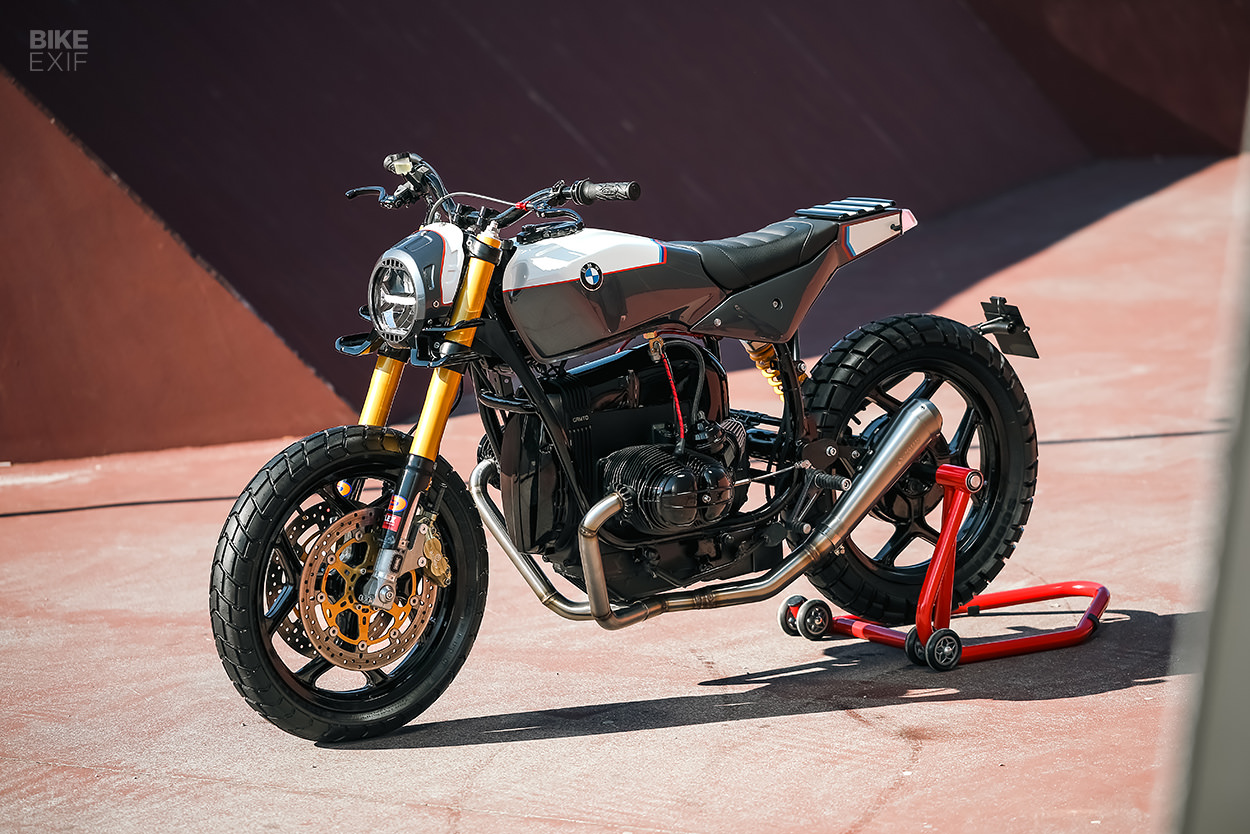 One hallmark of a good custom builder, is the ability to put a fresh spin on a motorcycle that’s been customized a thousand times before. By that standard, Žiga Petek is at the top of his class. His take on the classic BMW R80 is refreshingly contemporary—a sharp street tracker that maintains very little of the original bike.

Žiga runs his workshop, Gas&Retro, out of an old barn in the small Slovenian town of Notranje Gorice. He’s been tinkering on bikes since he left high school, but only went full-time within the last three years. And he’s already developed a signature style—favoring modern designs with cohesive lines. 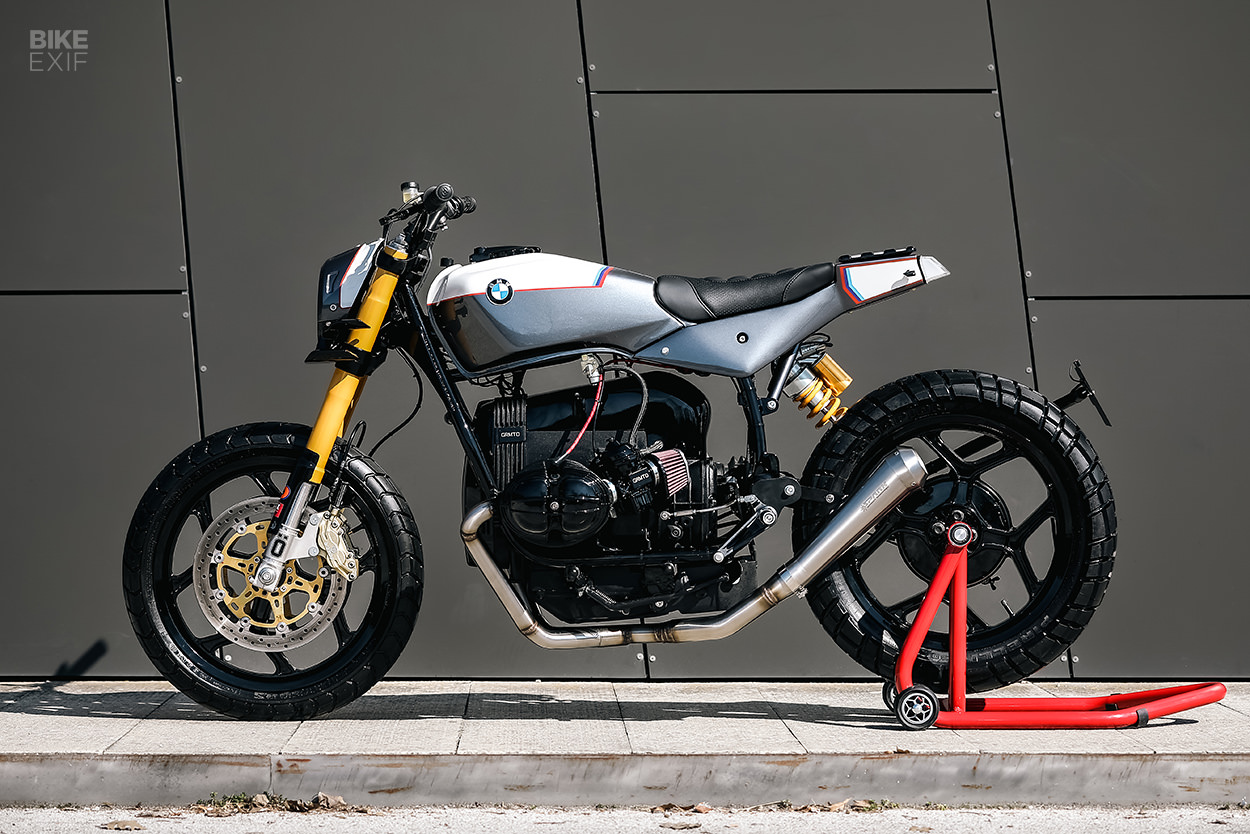 Žiga actually picked an old boxer for this project specifically because he wanted to prove a point. “I’d seen so many old BMW R-models,” he tells us, “and I had a vision to do something different than what I’d seen.”

“I suggested it to a friend of mine, Ales Peljhan, and he said he’s in. So we started looking for a bike to buy and found a 1989 BMW R80RT. We went to test it out… and after a few beers, we bought it.” 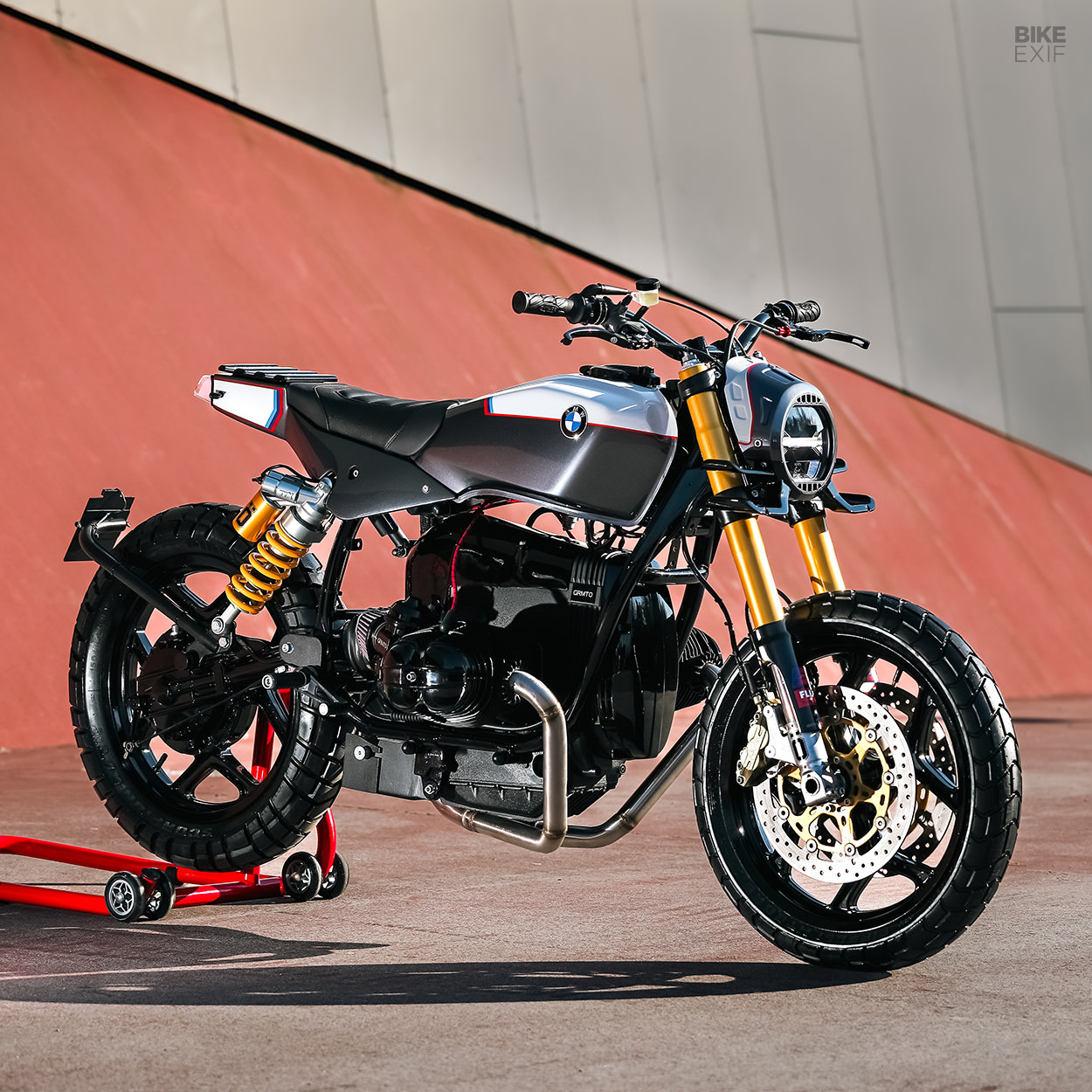 Once the bike was stripped down, Žiga set himself a challenge of changing as much of the donor bike as possible. All that remains now are the BMW’s engine, main frame, swingarm, wheels and rear brake. Everything else is either custom, new, or scalped from another bike—making this one of the cleanest bitsas we’ve ever seen.

The first piece of the puzzle was an old Honda FT500 Ascot fuel tank that Žiga found. With some creative cutting and welding, he managed to fit it to the bike. 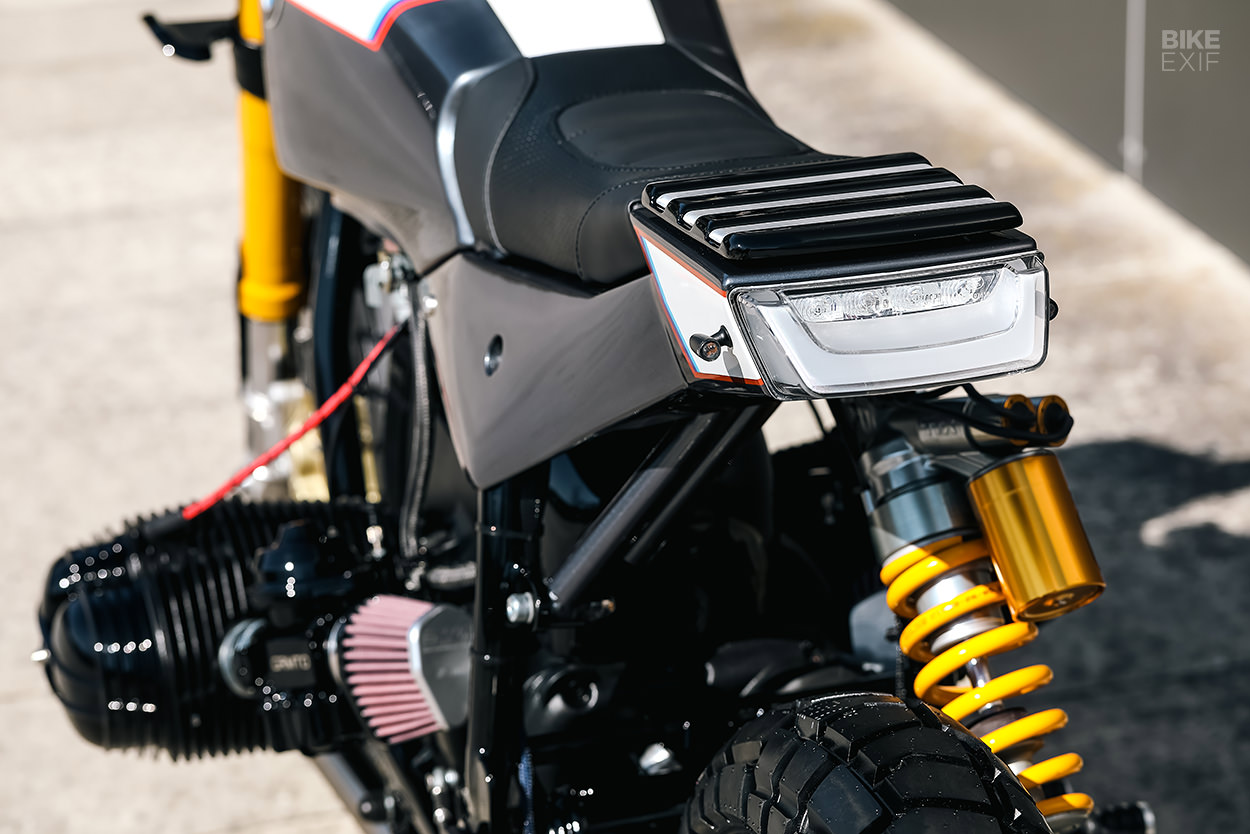 Žiga turned his attention to the rear end next. Inspired by Husqvarna’s Vitpilen and Svartpilen designs, he aimed for a tapered silhouette that was pitched slightly forward. So he actually sourced a Vitpilen 401 taillight—then based the rest of his design around that.

Using an English wheel and a shrinker, he fabricated a tail section that integrates neatly with the fuel tank and Husqvarna light. It’s supported by a tubular subframe, with a hidden storage space underneath it. Mitja Bizjak handled the stylish seat upholstery. 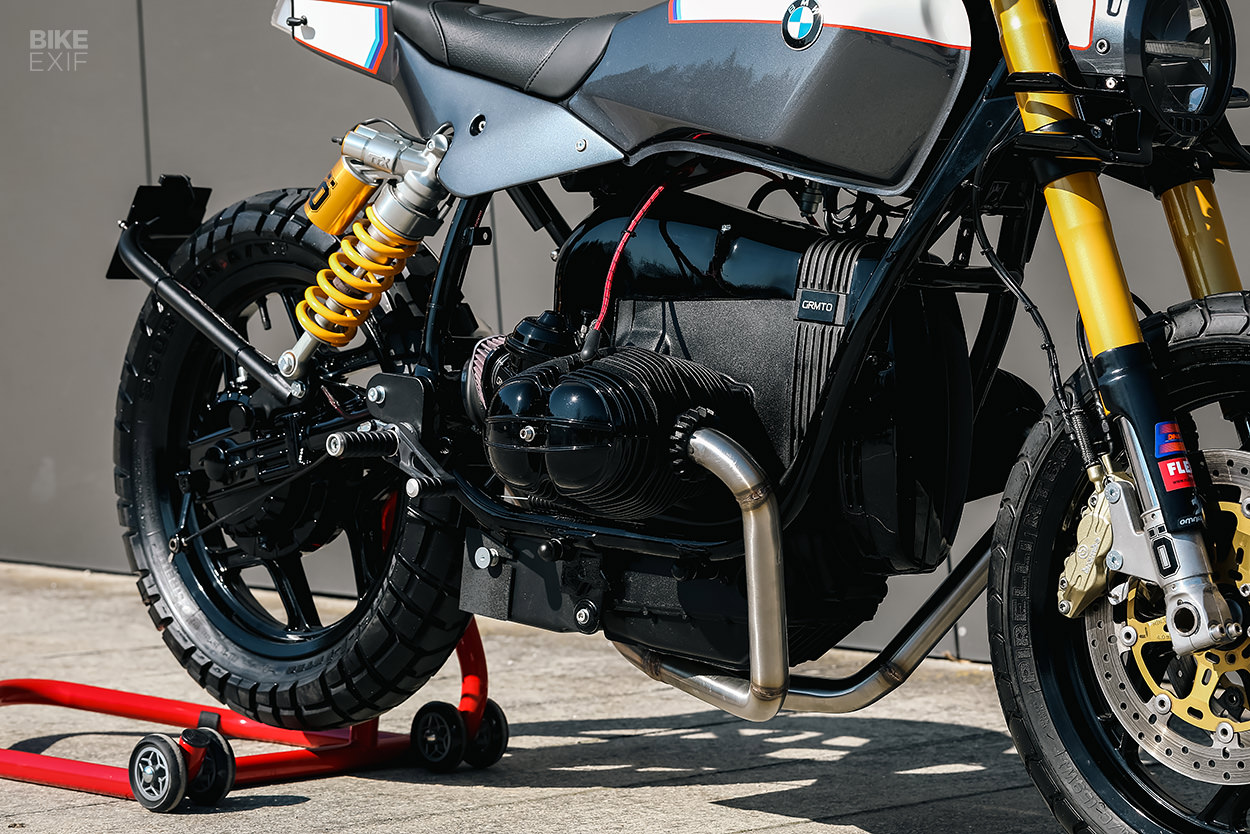 This boxer’s also sporting Öhlins suspension at both ends, courtesy of two very different Ducatis. The front forks and accompanying Brembo brakes were borrowed from a Ducati 900SS that Žiga still plans to customize. The forks are fitted by way of a custom set of yokes.

The rear shock came from a newer Ducati Multistrada. And since it’s equipped with Öhlins’ electronic suspension adjustment system, it had to be ‘programmed’ to suit this particular build. 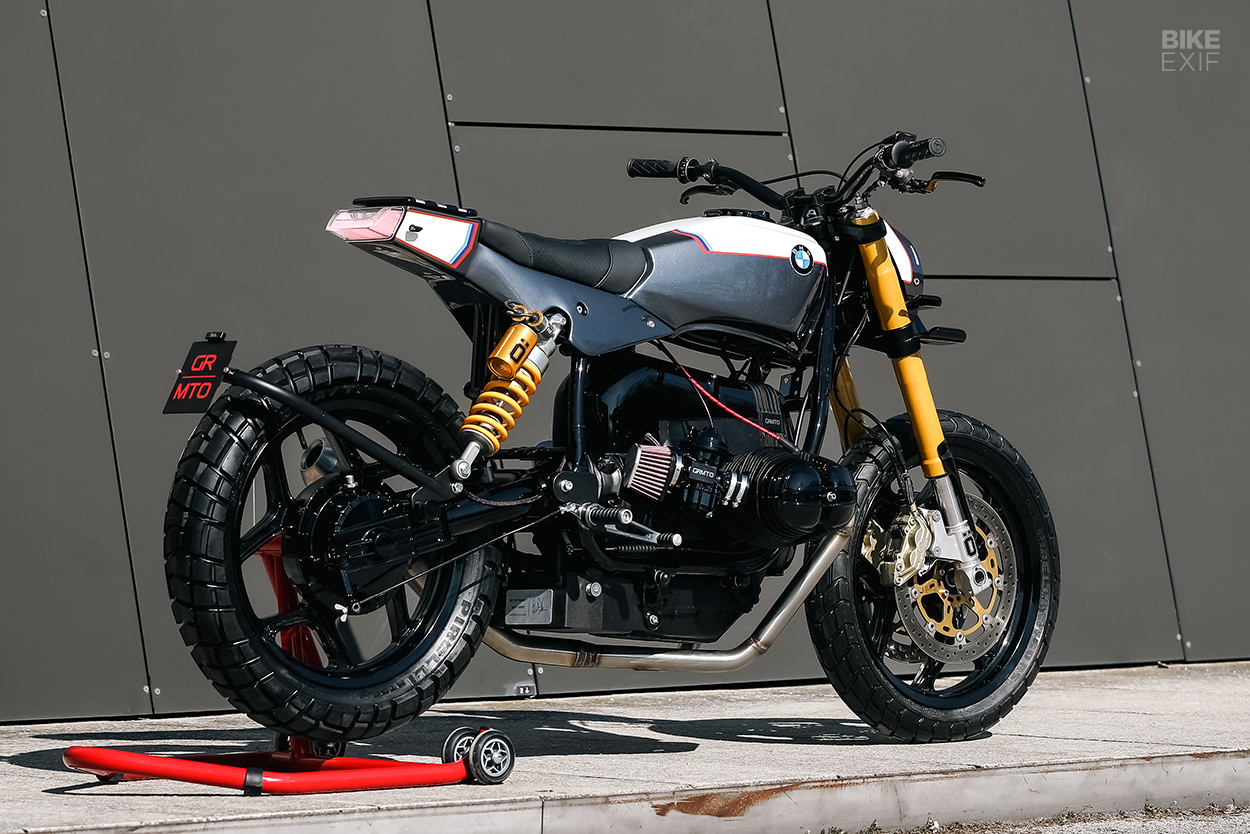 Žiga got started on the cockpit mods by sourcing a set of TRW Moto handlebars—but then the project stalled. “I couldn’t envision any more of the details,” he says. “The reason was probably because I was so focussed on the Husqvarna Vitpilen I had bought for the project that would eventually become ‘Yellow Arrow‘,”

“Ales wasn’t happy about it, but I promised him his bike would be even better than the Husky.” 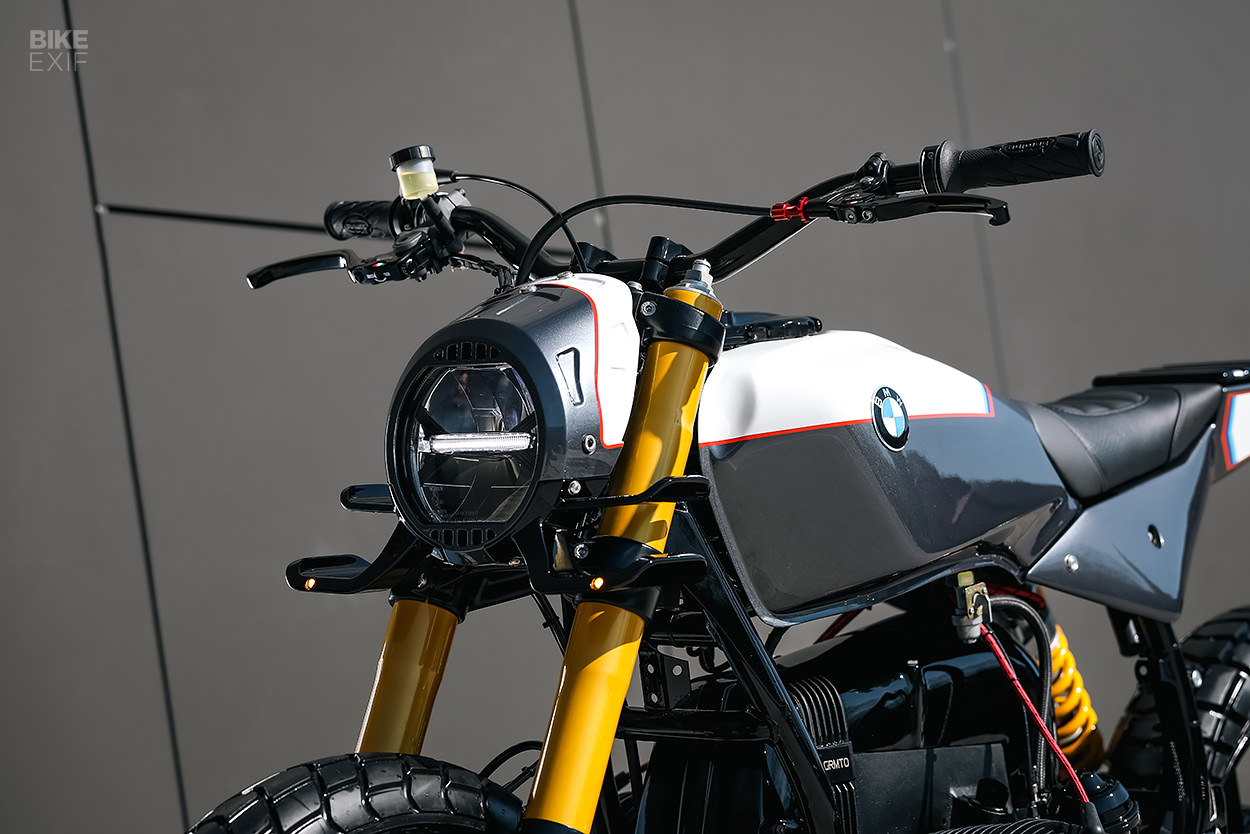 Once the Vitpilen was done, the remaining pieces of the BMW began falling into place. Žiga sketched out a concept for a headlight nacelle with aero-style ‘wings,’ then turned to long-time collaborator, Blaž Šuštaršič of ER Motorcycles, to create a digital 3D mockup of it. Another friend brought his 3D scanner to the party too, to make sure everything would fit perfectly.

The final part was 3D printed, and houses an LED headlight from Koso and an integrated pair of Kellermann turn signals. Further back are a set of Brembo controls, a Domino throttle and Motogadget switches, with a tiny digital Motogadget speedo mounted just forward of the fuel tank. 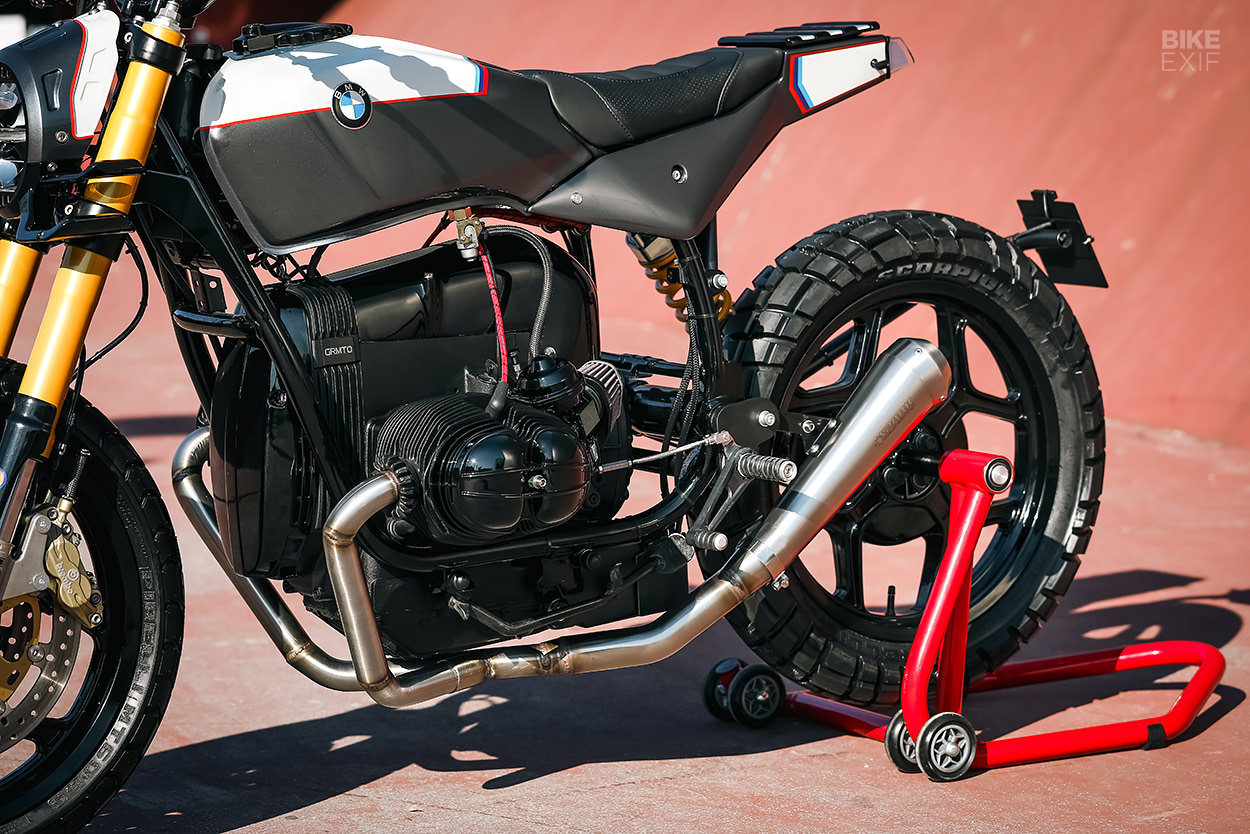 Moving onto the final touches, Žiga fabricated a new two-into-one exhaust system, capped off with a Spark muffler. The airbox was swapped for a pair of DNA filters, with a new airbox cover that traces the fuel tank’s lines. The battery was relocated to a custom-made box behind the transmission, and the whole bike was rewired around a Motogadget mo.unit control box.

Žiga also installed new Tarozzi foot pegs, and made a small luggage rack for the back. A swingarm-mounted bracket holds the license plate and rear turn signals. 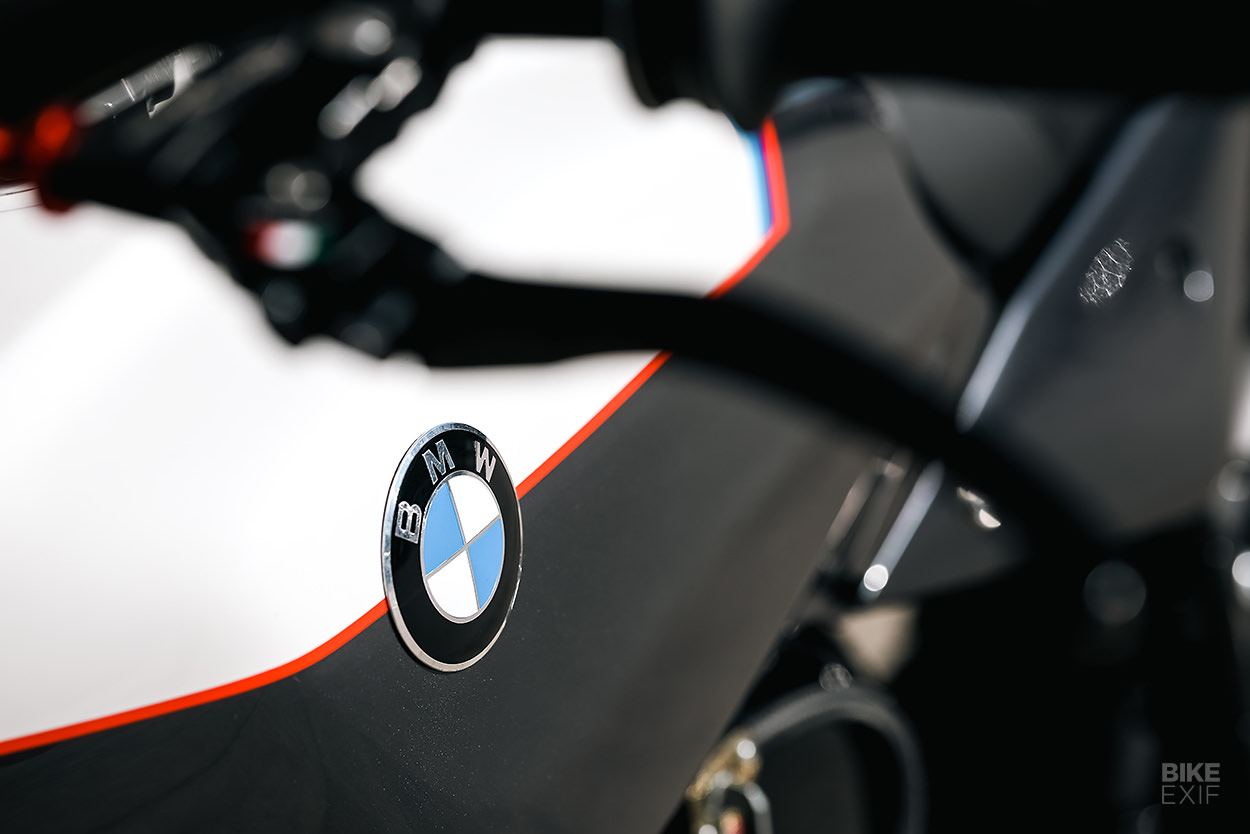 With everything in place, the bike was stripped down again for a solid engine refresh, carb rebuild and paint. “Paint is always a pain in the ass,” quips Žiga. “Because for me, it can f-k up the bike, or take it to heaven.”

In the end, he opted for a clean combination of grey and white—executed by Matej Mrzlikar and punctuated by striping in BMW’s classic M Power colors. The livery is complemented by a ton of black finishes, some tasteful Gas&Retro branding, and the iconic BMW tank roundels. 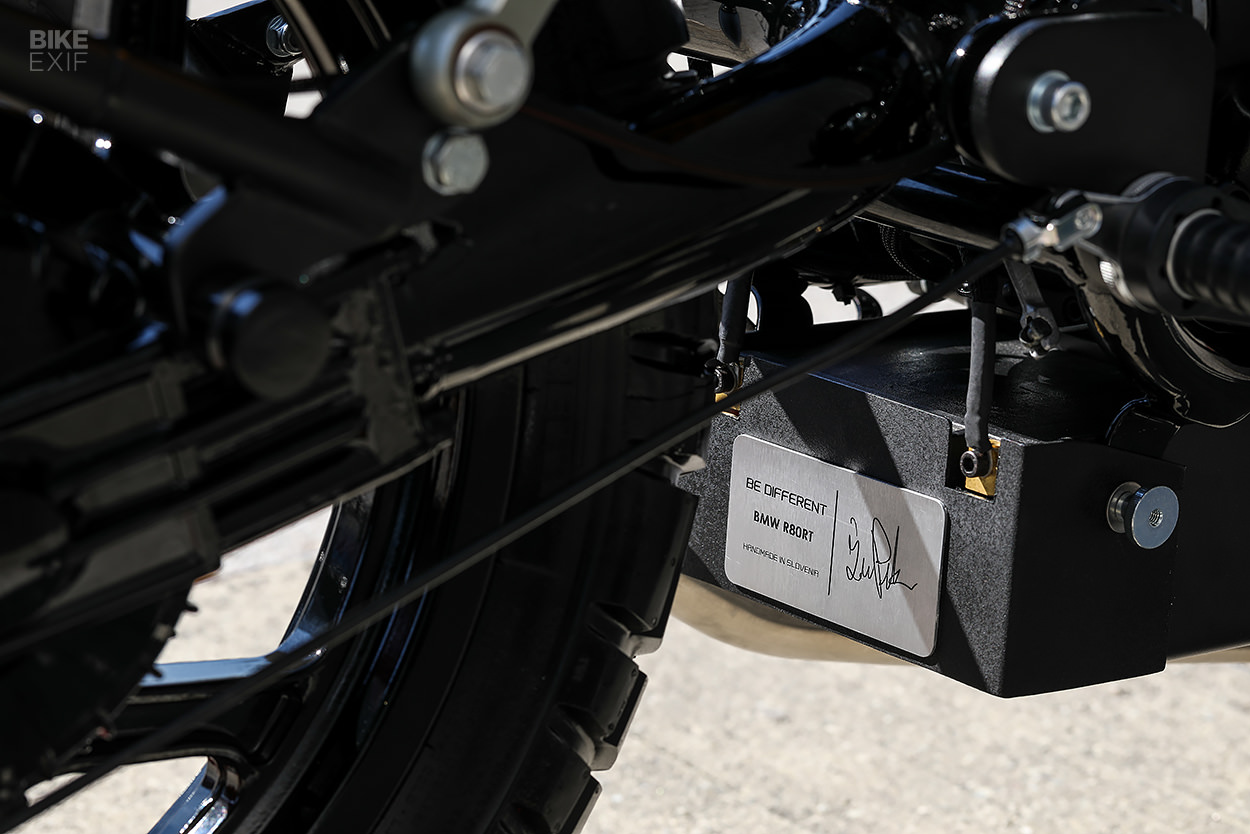 A small plaque on the battery box reads “BE DIFFERENT”; a well deserved slogan for this delectable neo-retro street tracker. “Ales saw that difference in the end,” says Žiga, “and was happy that he waited a bit more to get what he got.” 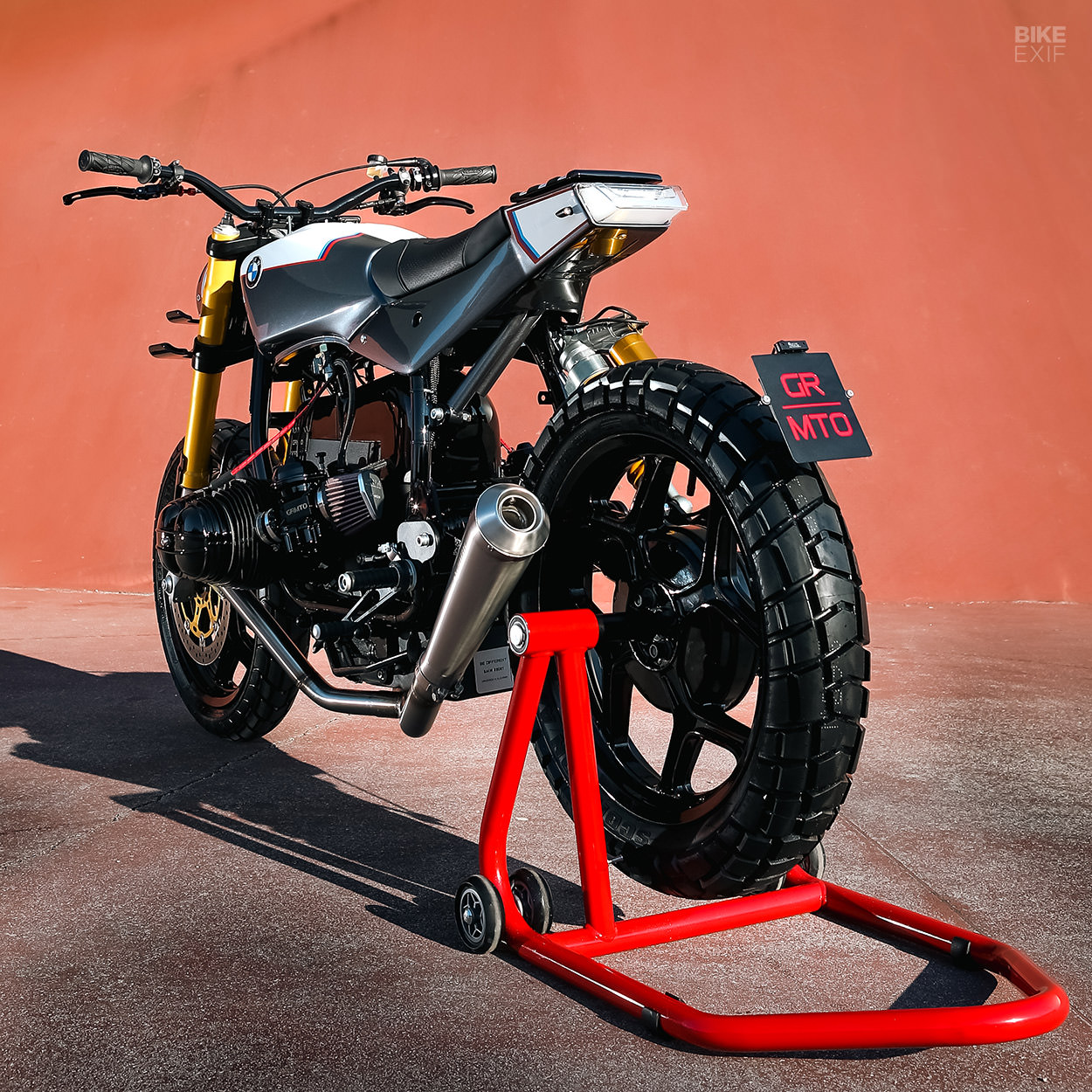