Better by design: A Yamaha TRX850 built by an architect 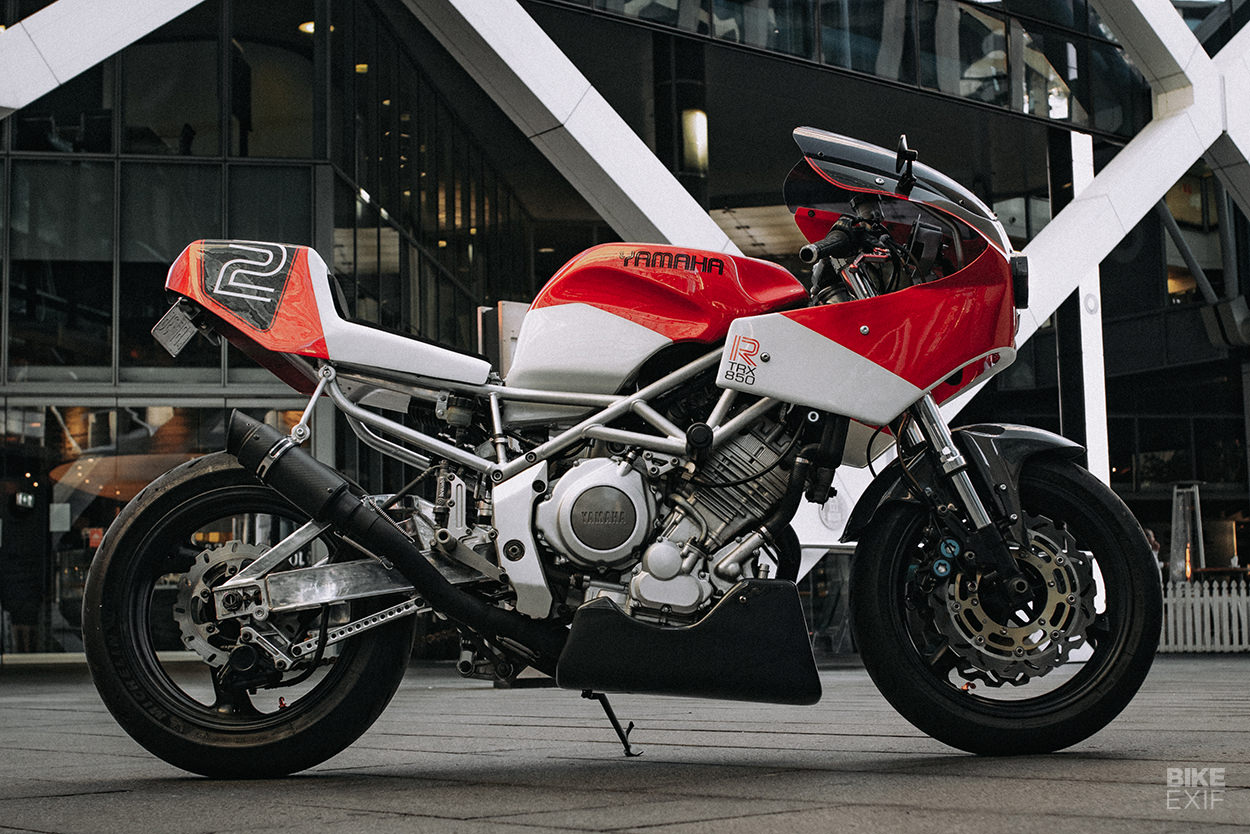 Back in the 90s, the Japanese manufacturers went through a phase of building Italian-style sportbikes. Honda had the SuperHawk, and Suzuki the TL1000S—both 90° V-twins. Yamaha, however, took the 10-valve DOHC parallel twin used in its sport tourers and came up with the TRX850.

The critical reception was mixed, to say the least, but these days the TRX850 is appreciated a little more. It’s a good value secondhand buy, and with upgrades to the suspension and brakes, it’s a torquey and fun machine for the open road. 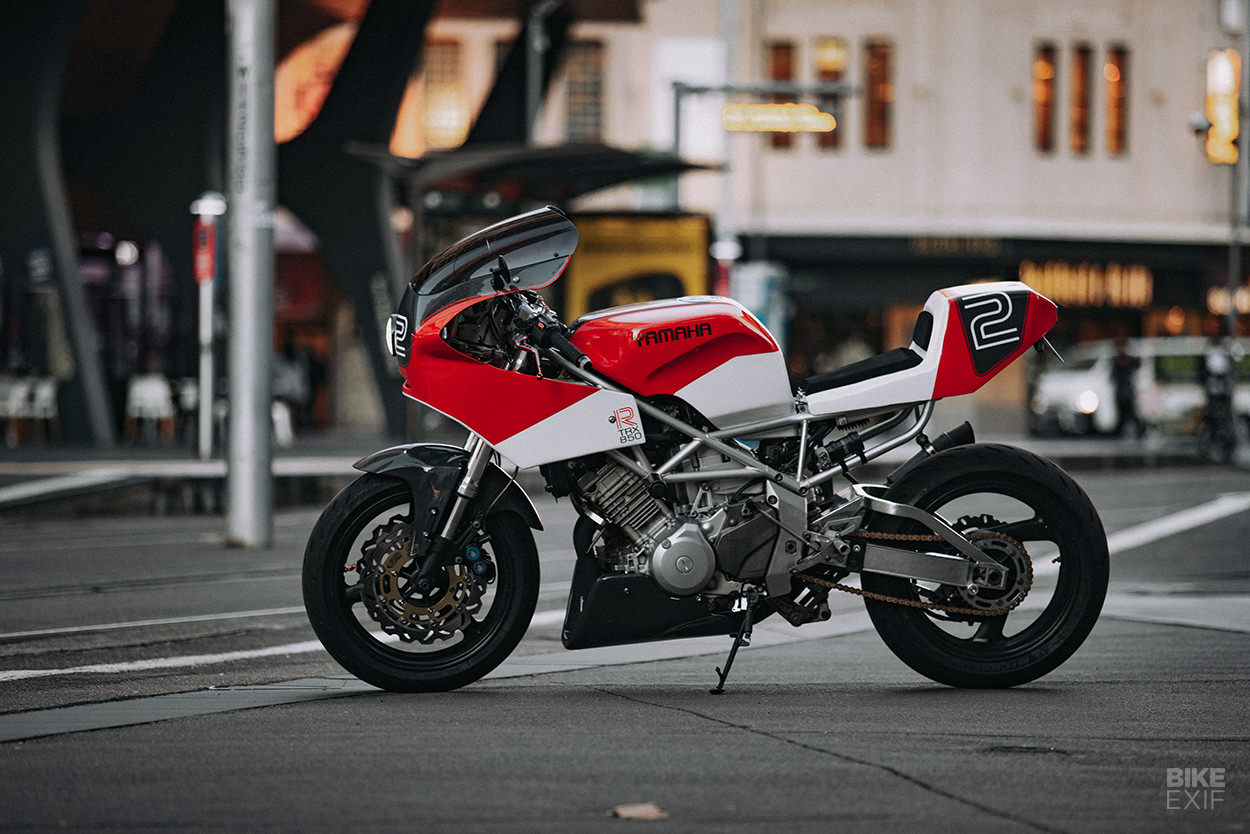 Australian Josh Bell is a fan. He’s a 30-year-old architect living in Sydney, and when he’s not designing buildings, he likes to build bikes.

It doesn’t sound like the most relaxing endeavor, though: “This TRX represents a couple of years of blood (mostly), sweat and tears—and experiments with fabrication techniques for the bodywork,” Josh tells us. “This bike was built on a limited budget, and I completed almost all of the work myself.” 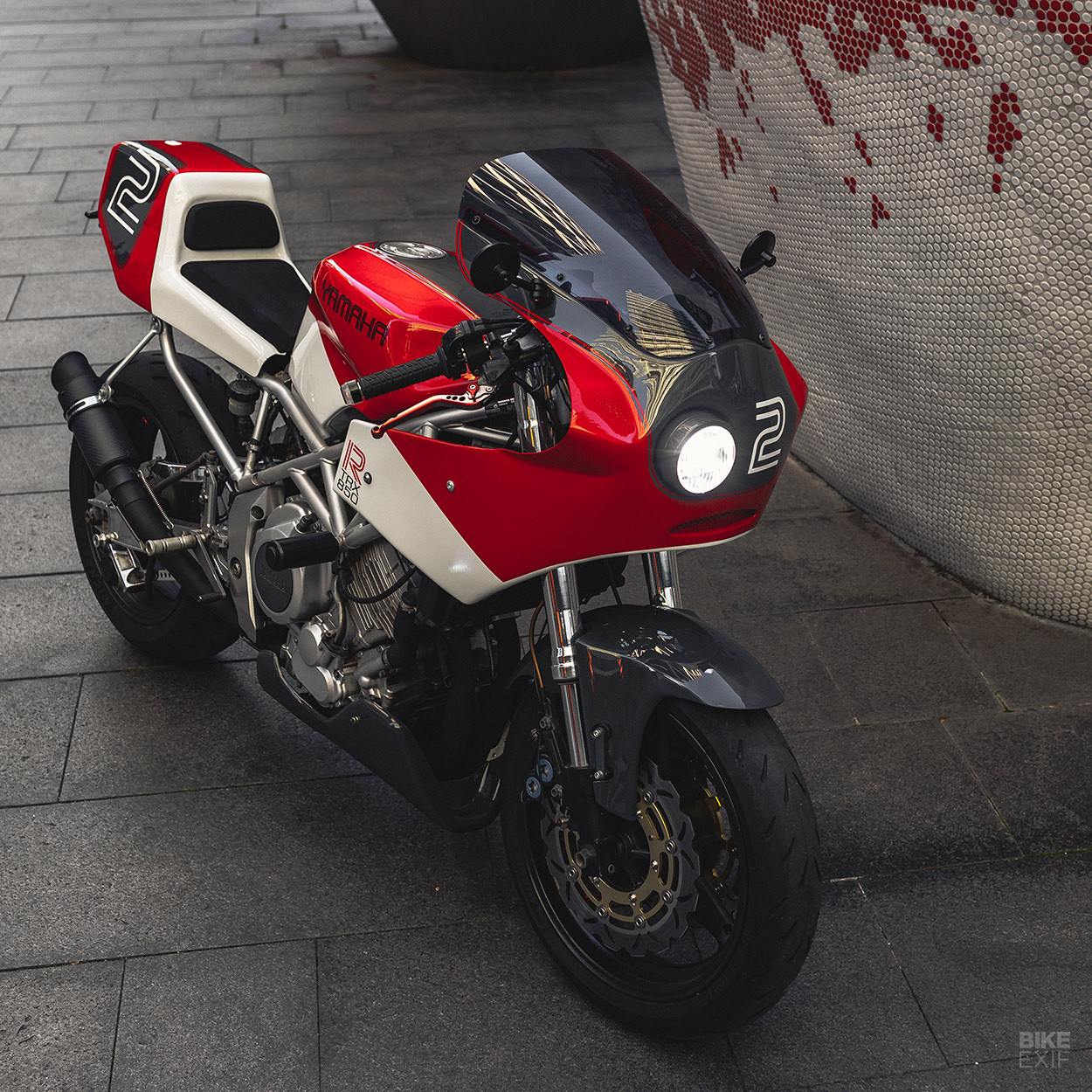 We reckon he’s done an amazing job. The TRX850 doesn’t look too bad in factory condition, but this custom with an endurance racing vibe has gone up to a whole new level.

The donor was a well looked after 1996 Yamaha TRX850, so the engine likely had most of its original 79 hp still available. Josh has boosted that fine mill by installing an Arrow 2-into-1 exhaust system, plus a carbon fiber end can—ceramic coated black for a low-key vibe. 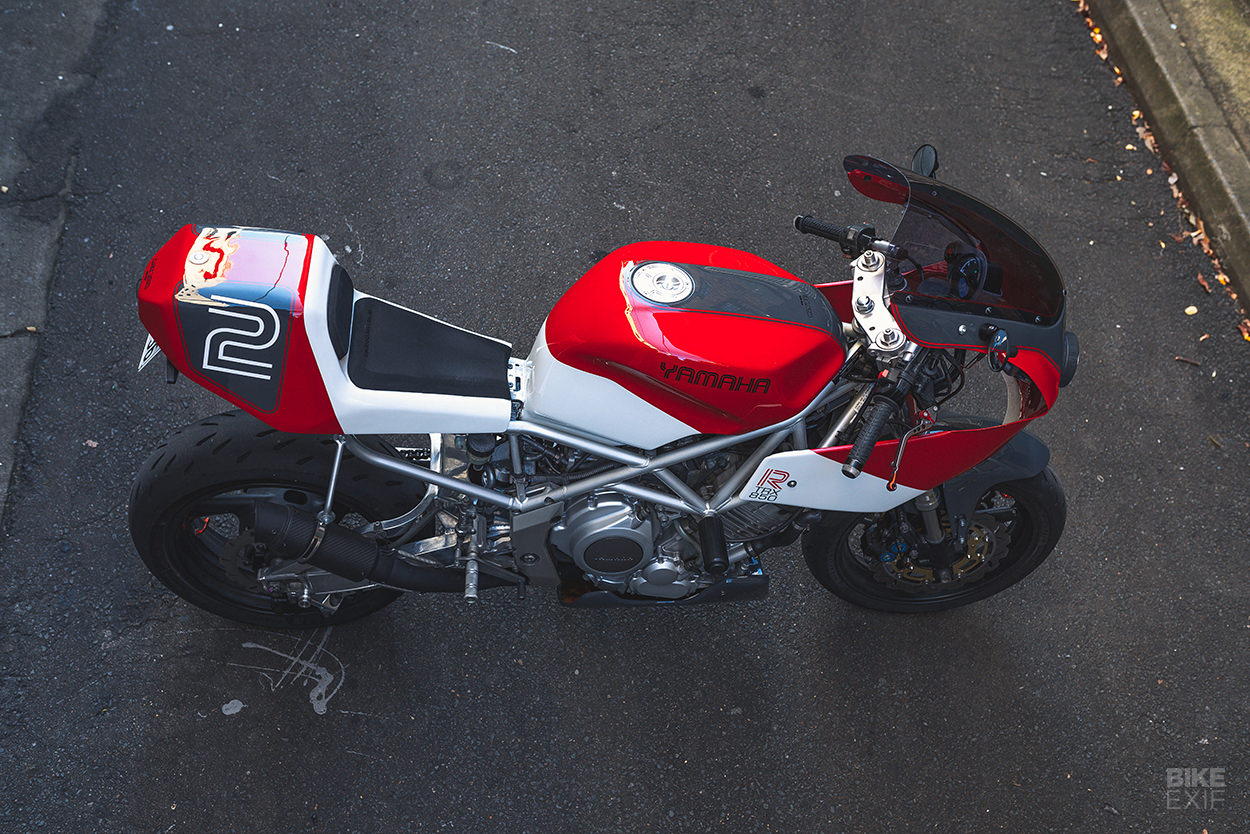 The carbs are the stock Mikuni BDST38s, the same as used on some contemporary Ducatis, but rejetted to take advance of the freer-flowing exhaust. A CDI box from Over Racing keeps the ignition system in tune and raises the rev limit.

To get the handling up to spec, Josh has grafted on the 41mm forks and swingarm from a Yamaha YZF750SP of similar age. They’ve been polished back to raw metal and it’s a substantial upgrade, since the YZF was essentially a WSBK homologation special. 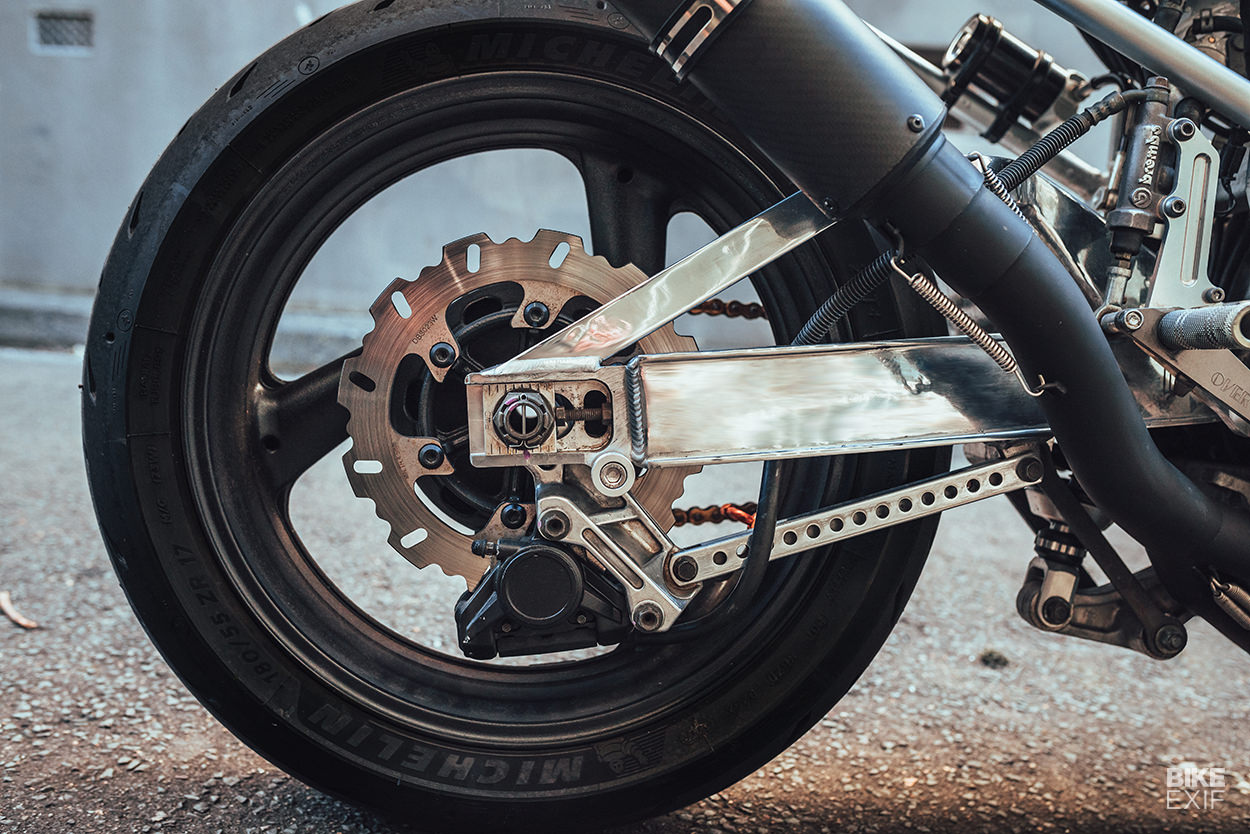 The forks have been refreshed with a race-ready spring kit tuned to Josh’s weight, and at the back, there’s a custom-built Wilbers remote reservoir shock, with adjustable high and low speed compression damping.

The 17-inch wheels are from a YZF750SP too: they’re refinished in satin black, and fitted with Michelin Power Cup road-legal race tires. 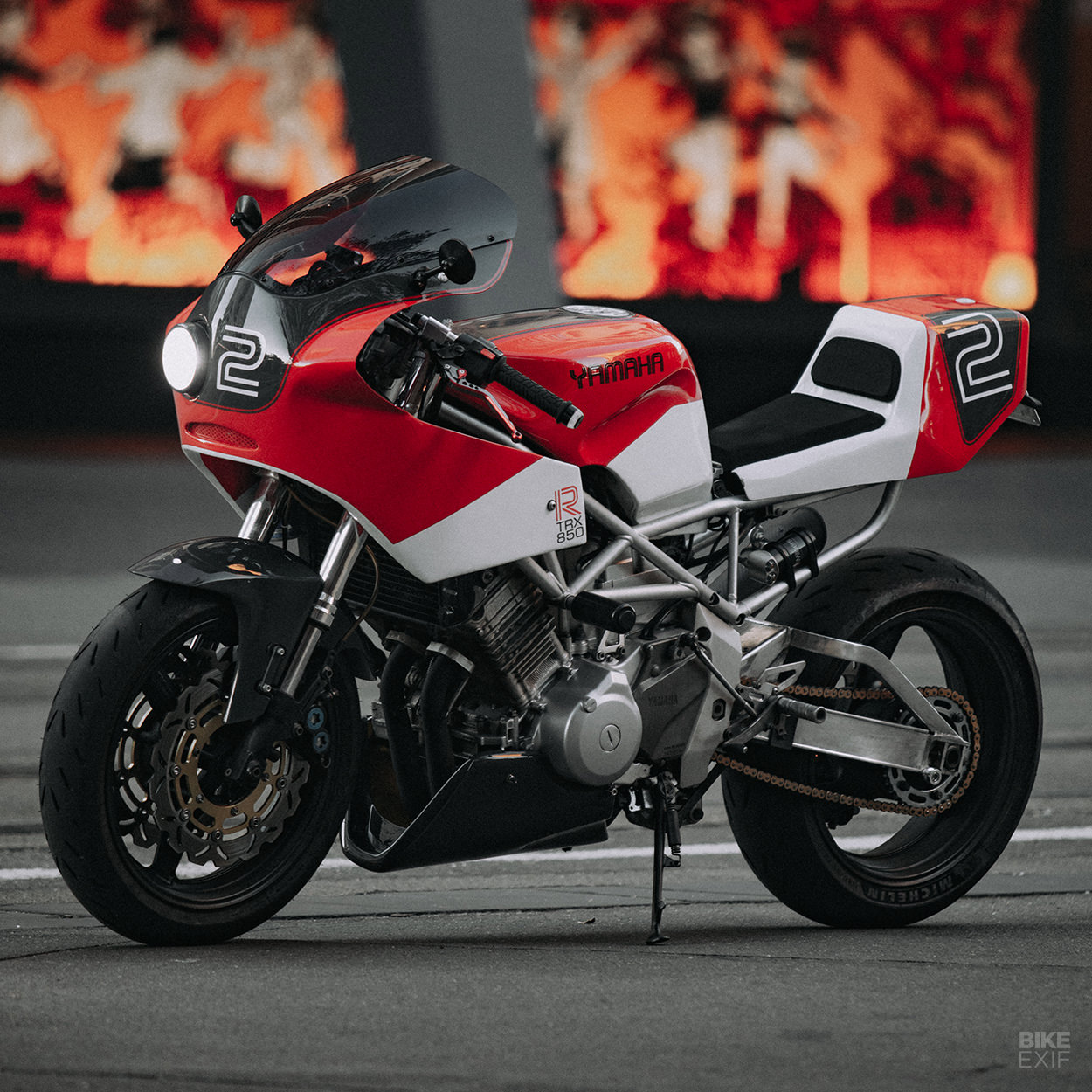 With the mechanicals up to scratch, Josh turned his architect’s eye to the bodywork. He’s handmade an aluminum front fairing using a single sheet of metal with zero welds. 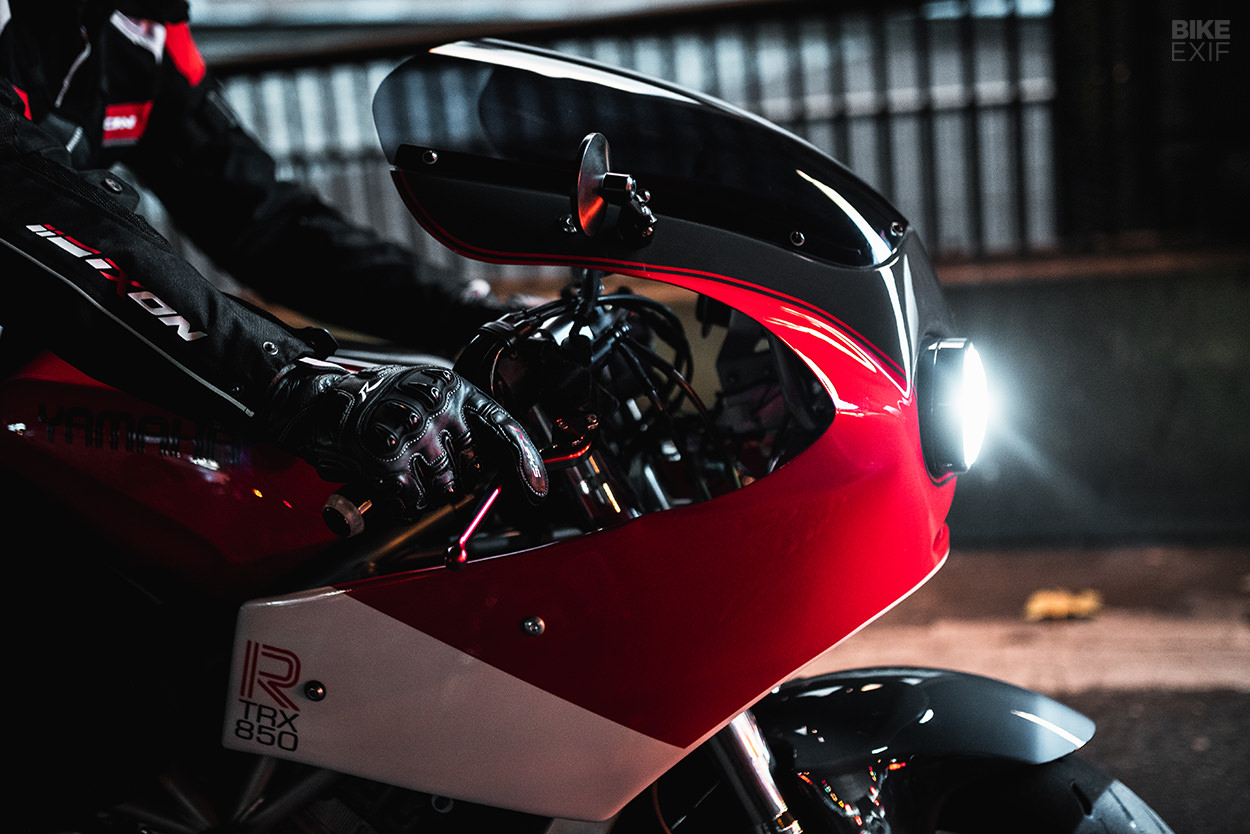 “I made a paper template from the existing TRX fairing so I could work out my mounting points, and then got creative,” he says. “I was pretty obsessed with the Suzuki XR69 at the time, so it’s kind of a blend of that and the original. A lot of time and coach building techniques used on this one.”

The original fairing bracket, suitably modified, holds everything in place and there’s a new aluminum support for a dash, which holds a generic speedo and a digital temperature gauge. 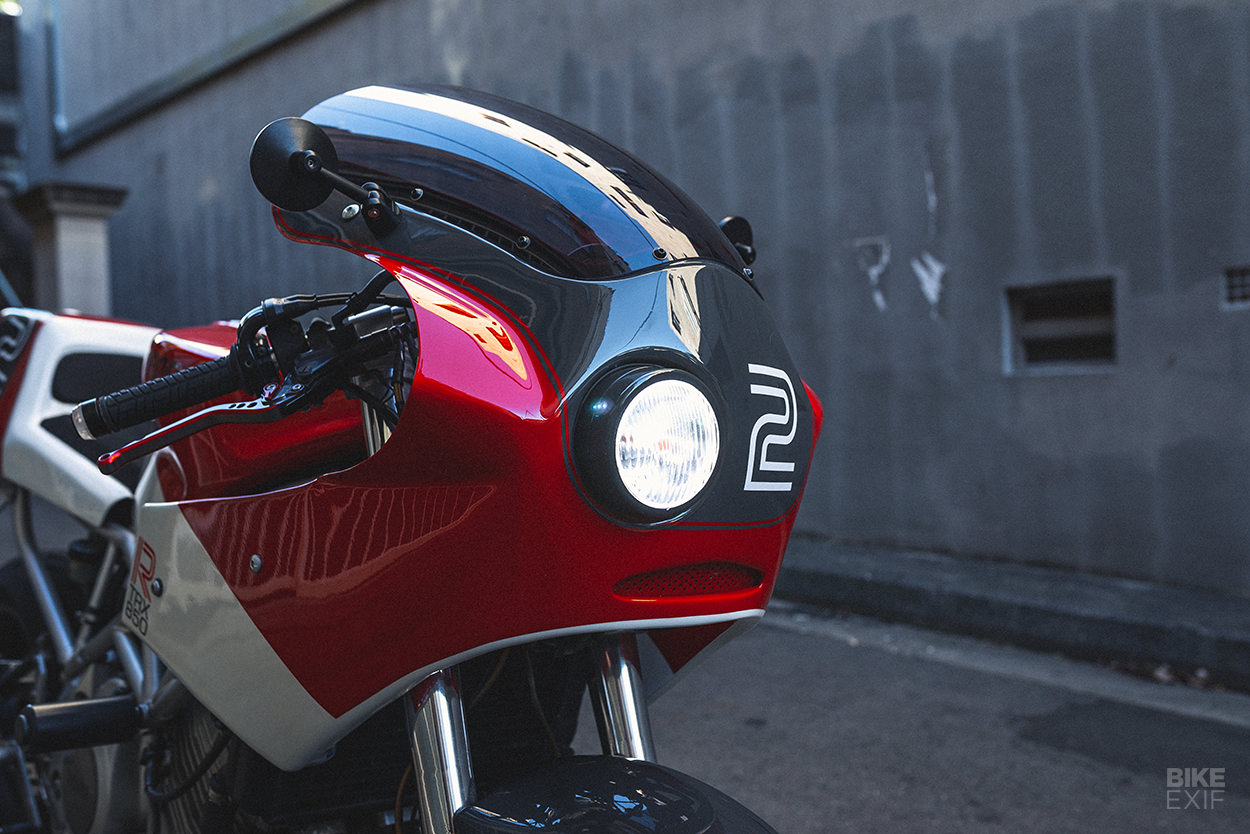 There’s a 4-inch single headlight embedded rather than flushed into the fairing, with a custom painted shell, and bar-end indicators for the turn signals. (A lithium battery now supplies power.) The mirrors were originally bar-end designs too, but are now attached to the fairing itself.

The new tail started with a 3D model of the frame and new seat unit, which Josh then routed into high-density foam. “This was used to make a buck for the finished fiberglass unit. The seat is set on hinges, and has a push-button release from a drift car bonnet to open up the electronics tray.” There’s a simple LED brake light with LED strip indicators on either side of the license plate. 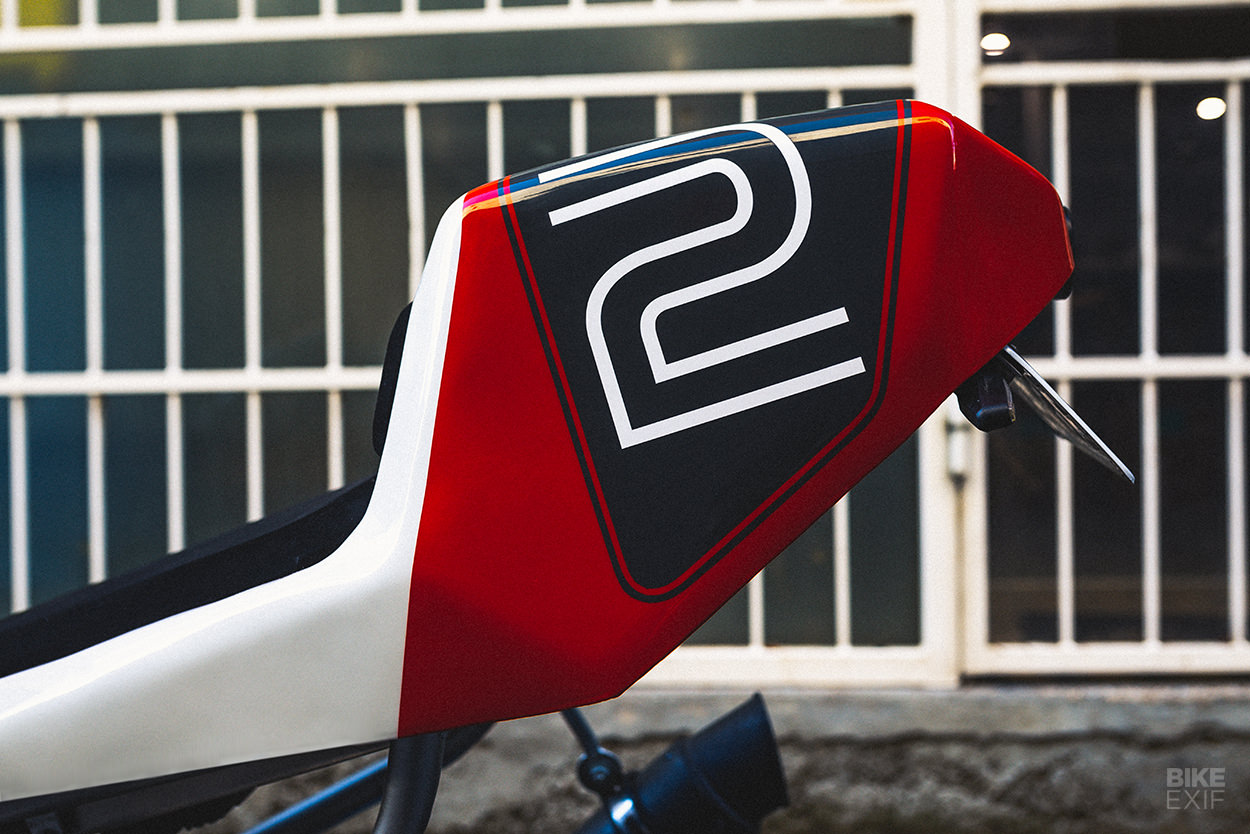 Down below is a belly pan, handmade from an aluminum buck with the final piece made in carbon fiber. (“The engine is incredibly asymmetrical and this one was a big challenge.”)

Josh designed the striking paint and graphics himself, using vinyl templates. “I was really inspired by the ‘loudness’ of the 90s endurance racer movement,” he says, “but also wanted to add my own aesthetic—to land somewhere in between, with a scheme that would age well.” 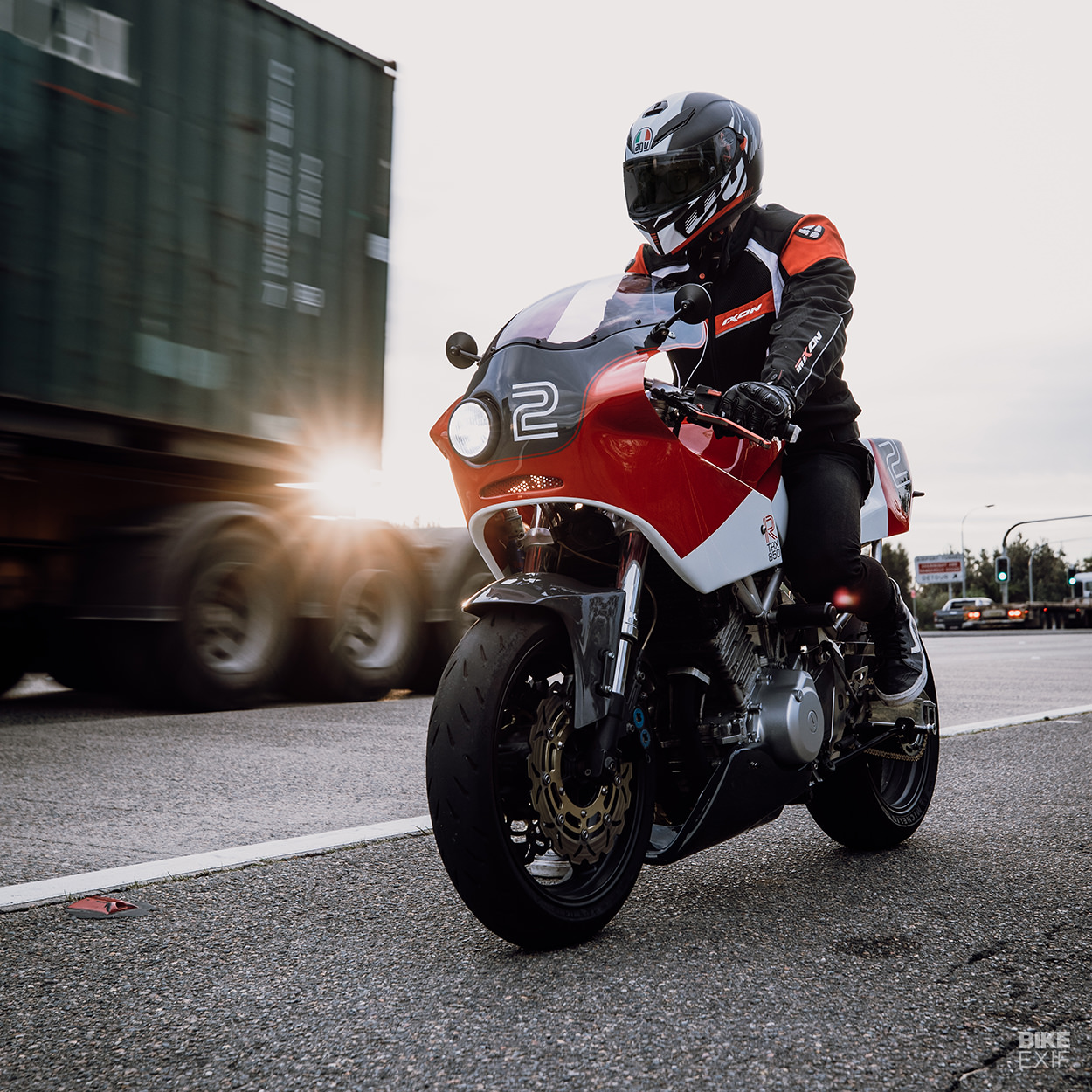 “I used the late 70s Ducati font, as a bit of an inside joke for a bike with a history of identity crisis. Finding the perfect red paint was a long task: Ferrari Rosso Corsa 322 was the perfect fit. It changes from blood red in some light to almost watermelon in direct sun.” The paint was expertly applied by Alexandria Collision Centre in Sydney’s inner city.

Finished off with a CNC-machined gas filler cap, Over Racing rearsets and a can of Red Bull as a radiator overflow, Josh’s Yamaha looks absolutely stunning. And if it inspires more builders to look at the underrated TRX850, that’s no bad thing. 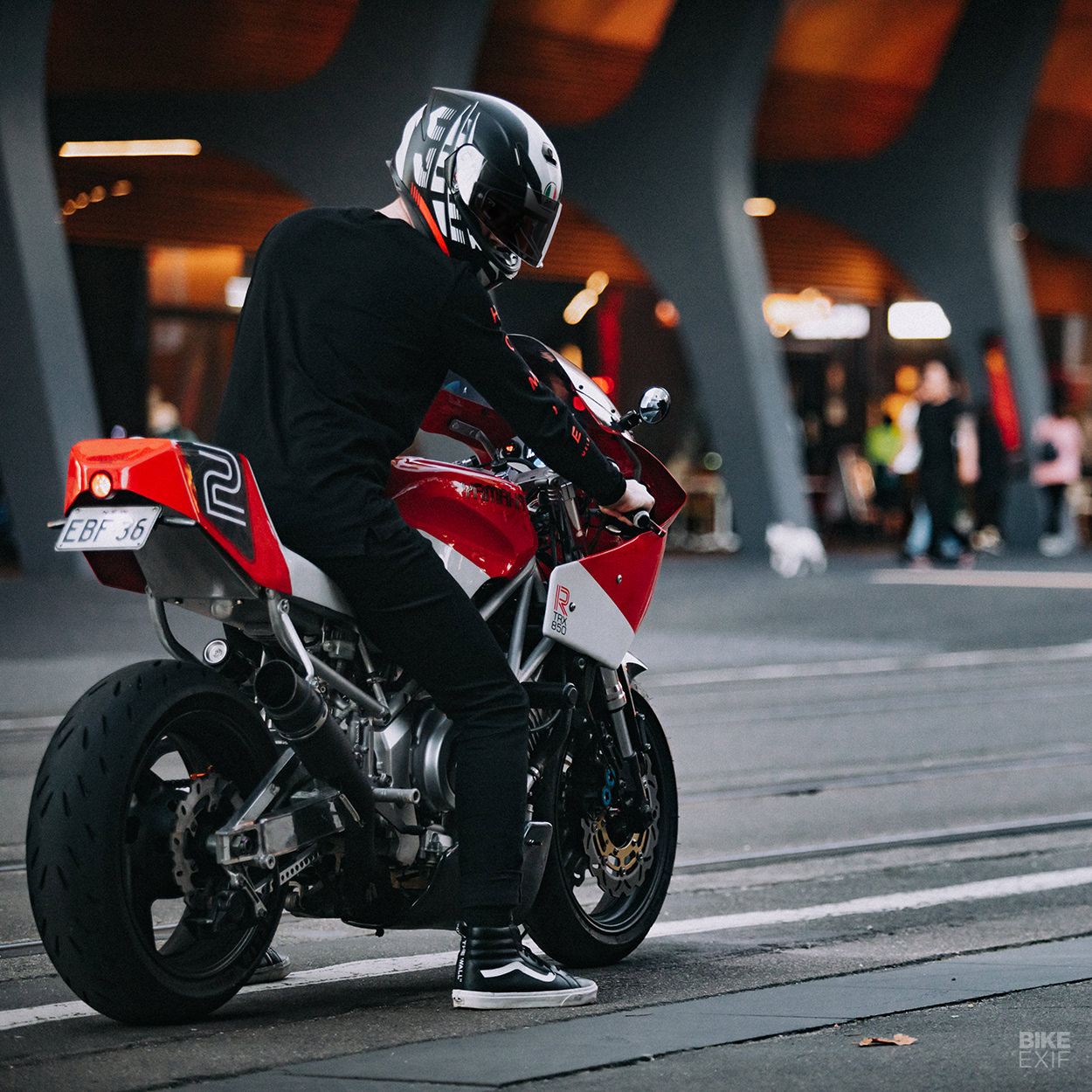 Josh gives special thanks to: Dad (Bryan Bell), Jason Parkin at Jays Auto for dyno tuning and sprocket alignment work, all round knowledgeable guy Russell Lowe for fabrication tutelage (keep an eye out for Julia Motorsports) and Paul for the paint.