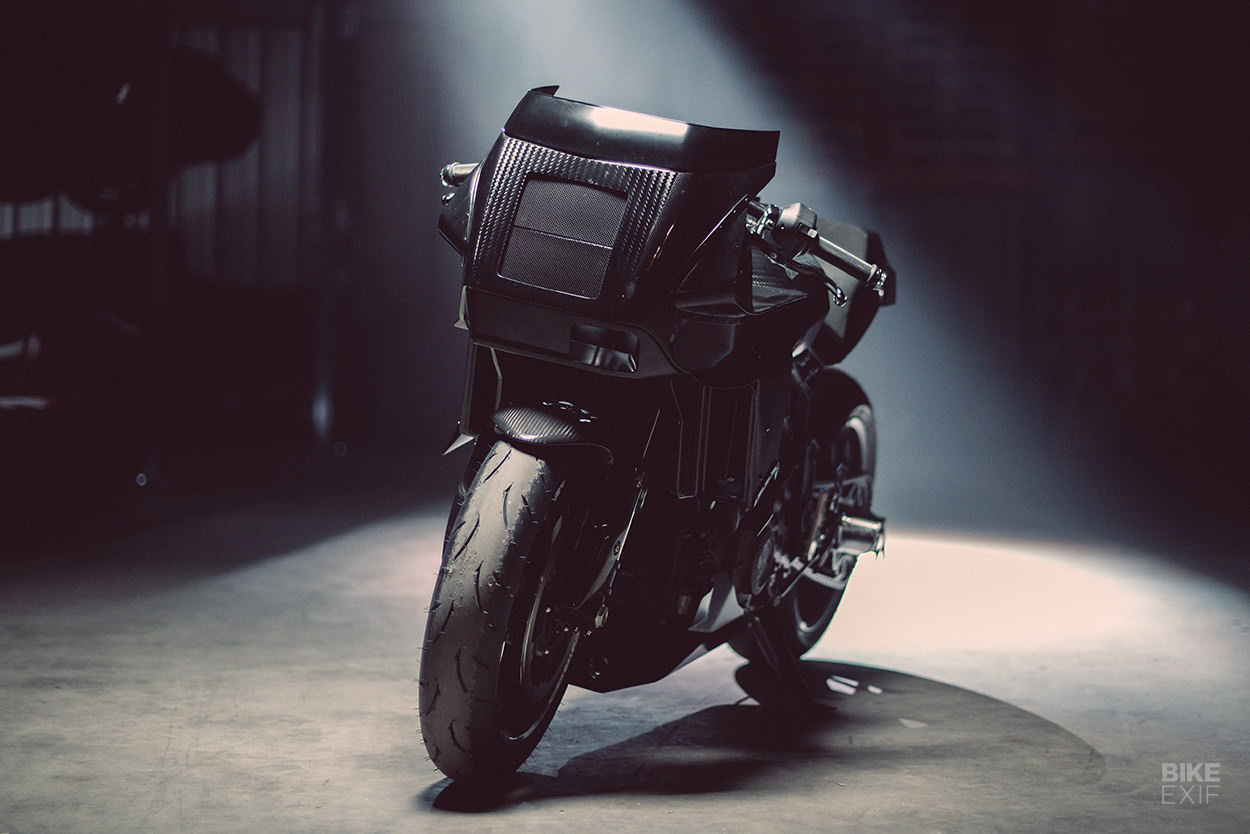 Workhorse Speed Shop wowed us two weeks ago, with a retro AMA superbike-inspired Indian FTR 1200 specced to the hilt. But that was just one of two FTRs that Workhorse’s Brice Hennebert had been working on. We’ve now got a look at the other—and even though the bikes were built for a pair of brothers, they couldn’t be more different.

This one’s called ‘Black Swan,’ and it’s a brutal, carbon-clad superbike that takes cues from multiple sources. Brice’s mental mood board on this project included 90s sportbikes, contemporary MotoGP racers, and even the Porsches of the German tuning company, RAUH-Welt. Think of it as Batman meets Top Gun, only much more radical. 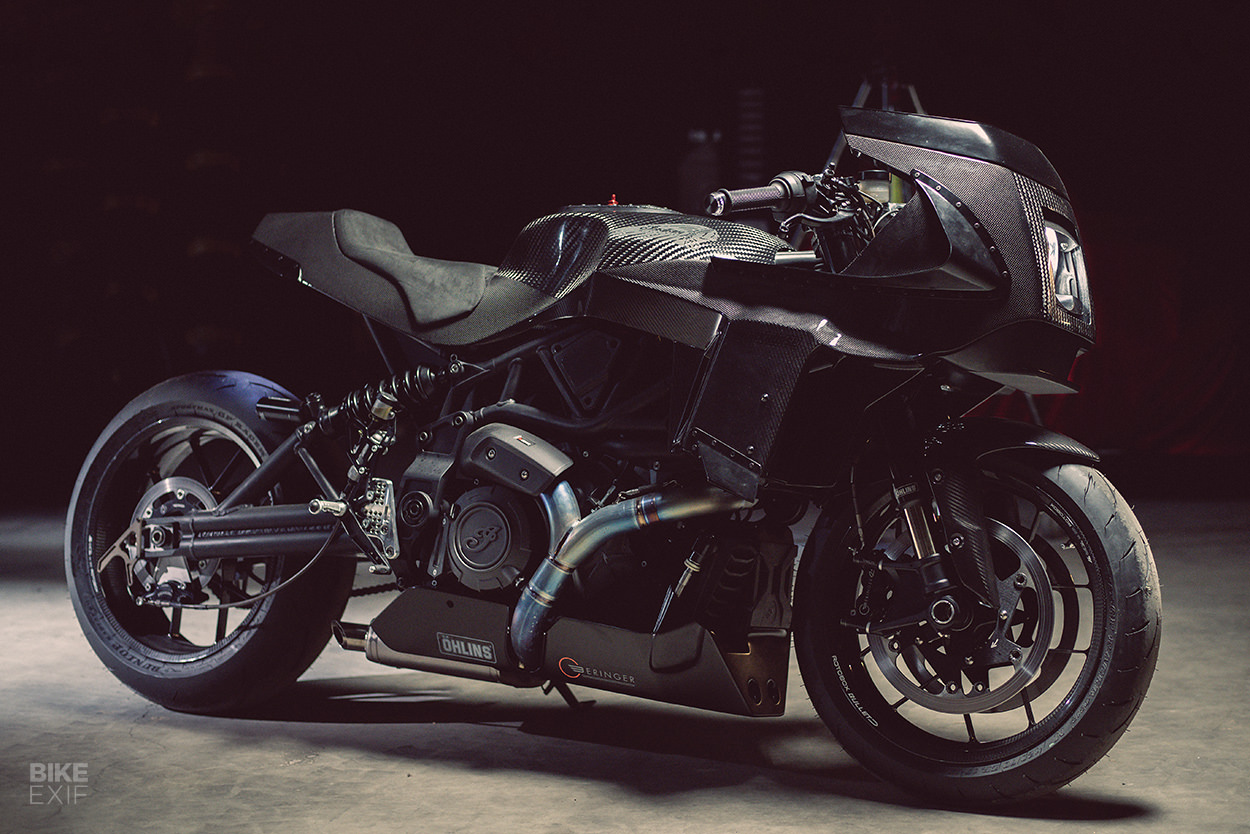 Brice first had the idea to build something in this vein several years ago, while racing at the popular Wheels & Waves festival. “I had the vision to build a sports bike for road use—really sporty, built like a GP bike,” he explains. “It’s deeply inspired by 90s sports bikes, all made from carbon fiber.”

“The owner of the bike gave me total freedom around the project. So, I pushed all the levels to my maximum. It’s pretty unique and the most complicated build I’ve done to date.” 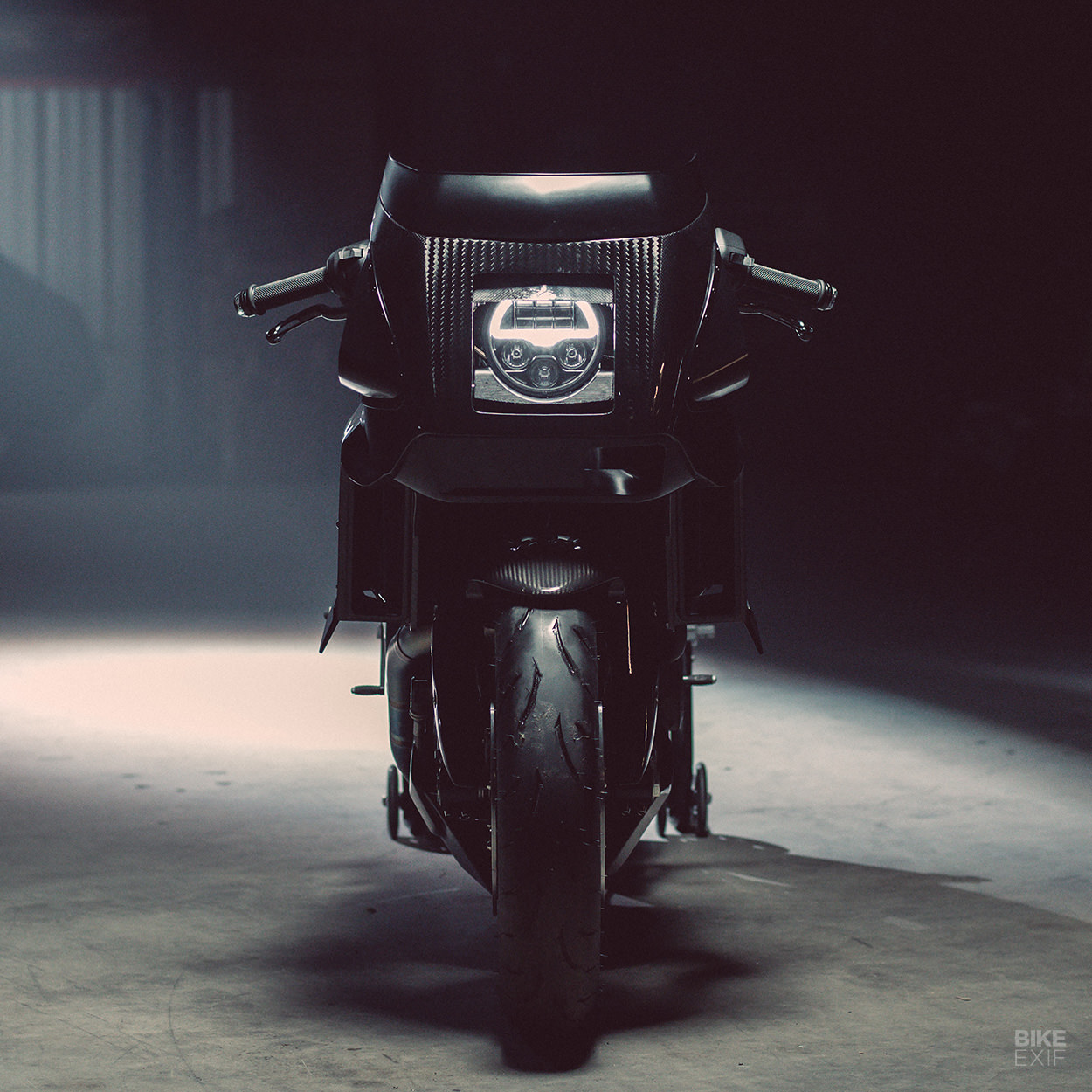 Brice isn’t overstating it—there really is a lot going on with this build. The biggest visual change here is the carbon fiber body kit. It combines the fairing, tank cover and tail into one piece, and it was considerably technical to execute.

Working from his own concept sketch, Brice started by constructing a wire mesh around the stock bike. Next, he shaped the parts out with modeling clay—or at least, half of them. “I did not need to create a full symmetric body in clay, just one half of the bike as a master,” he explains. 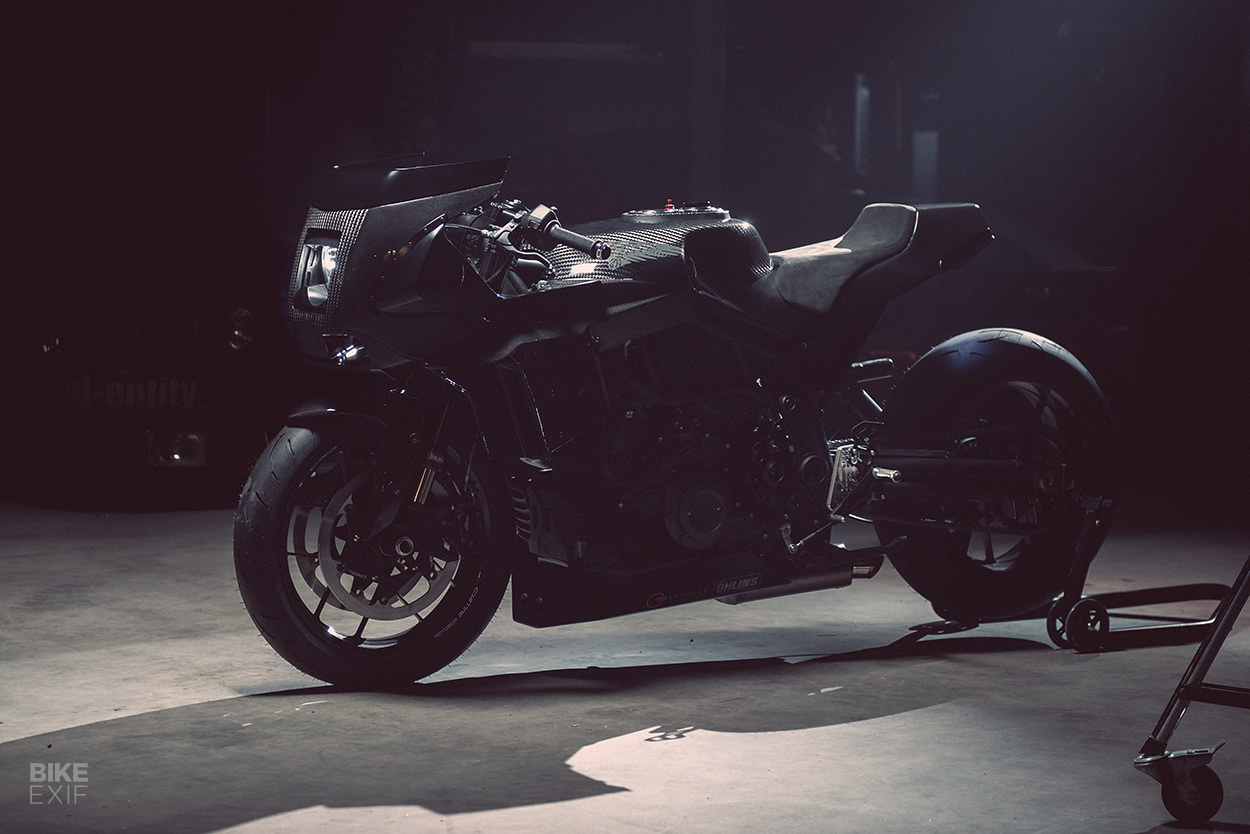 “Once I was happy with the shape, I used a 3D scanner to pass the form to Formae Design who worked with me to refine the virtual model, create the full-body symmetry, and integrate all the accessories and fittings. Christophe at Formae helped me a lot with all the different components of the body.”

The next step was to 3D print a prototype of the one-piece body. It then went off to 13.8 Composites, where Robert Colyns recreated it in carbon fiber. 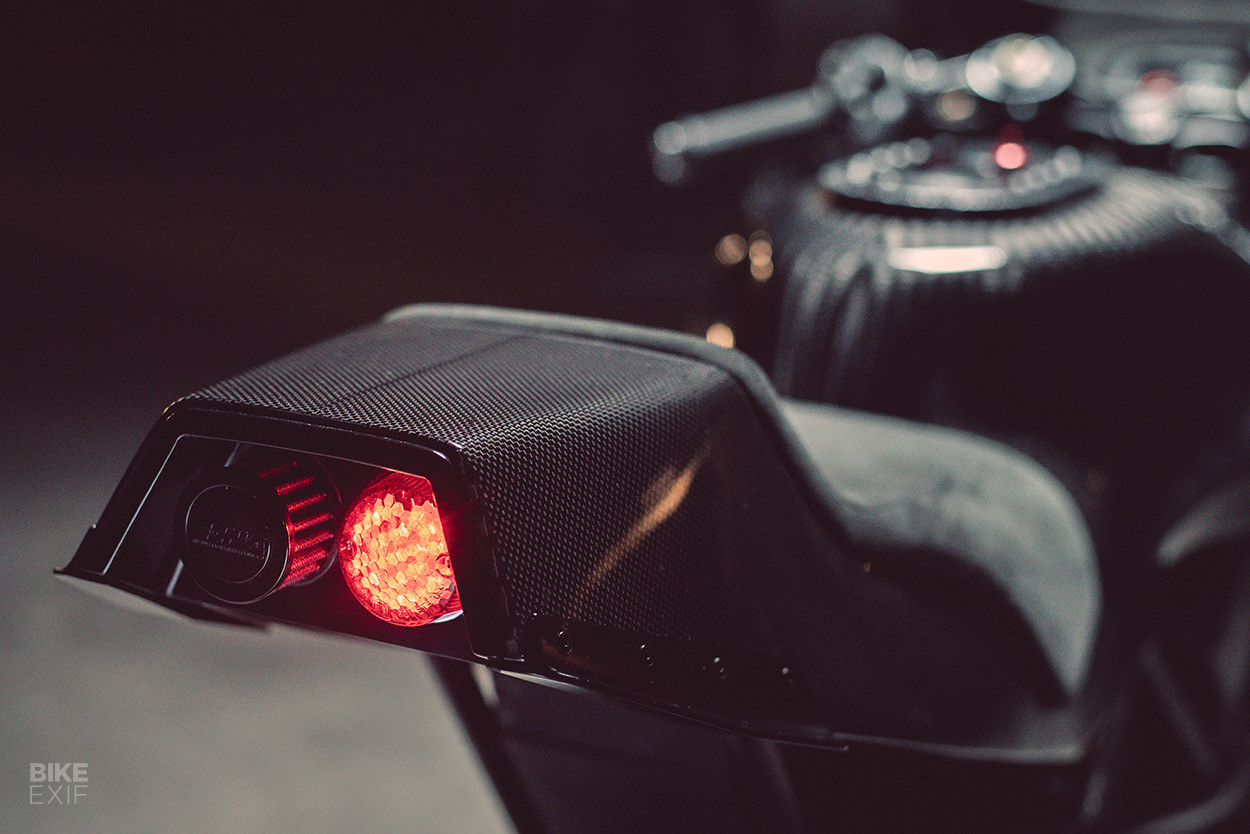 “As I’d decided to show off the carbon fiber and not paint it,” says Brice, “I gave Robert the freedom to choose the carbon weave that would look the best and still work with the design I had given him. After a few weeks of waiting, he came back with this hell of a piece. The whole body only weighs about 1.8 kg [less than 4 lbs].”

“Creating the bodywork was a major part of the build. It’s everything but practical, but I was determined to have a one-piece body.” 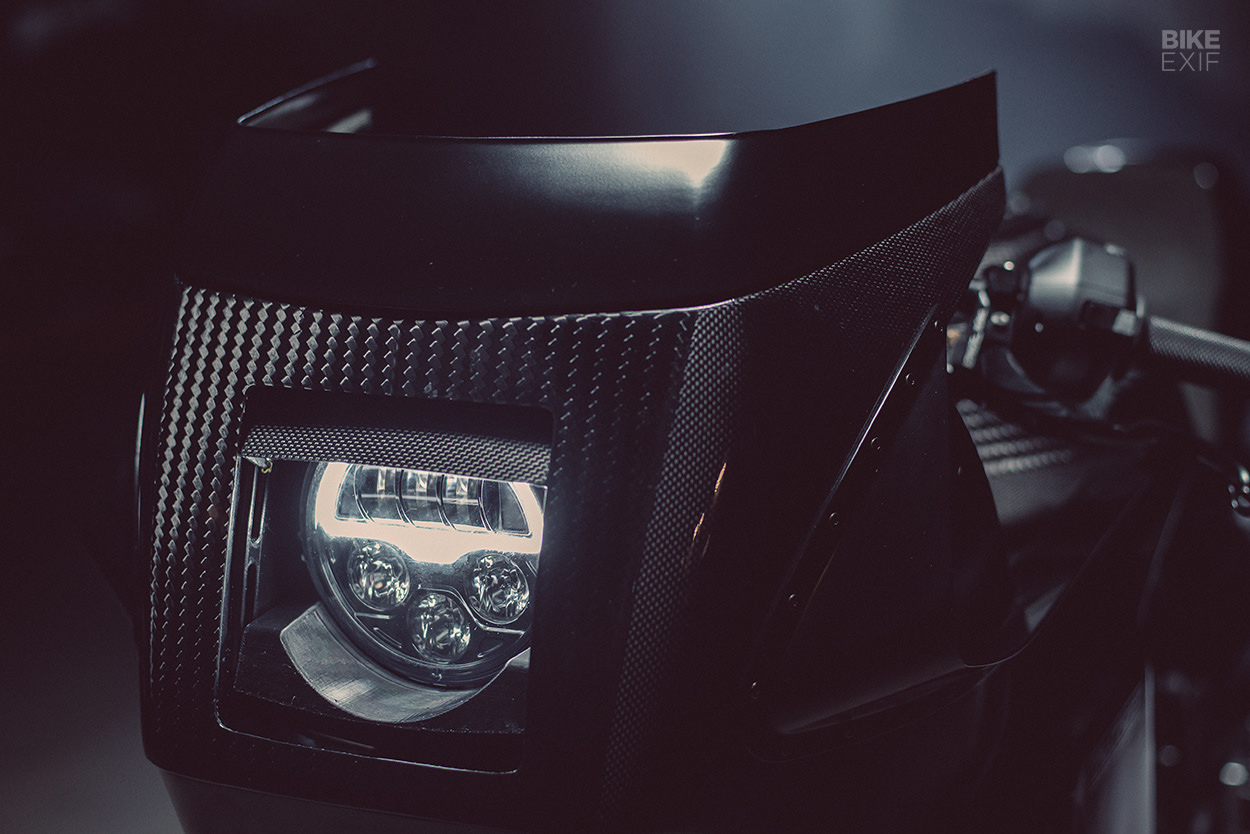 With the body ready to go, Brice set about implementing one of his quirkiest ideas. As a wink to classic sports cars, he added a pair of ‘eyelids’ that open and close over the OEM headlight. The system’s operated by two stepper motors, controlled by a custom-programmed Arduino controller.

“It may look simple and easy for some people,” says Brice, “but for me, that was quite a challenge.” 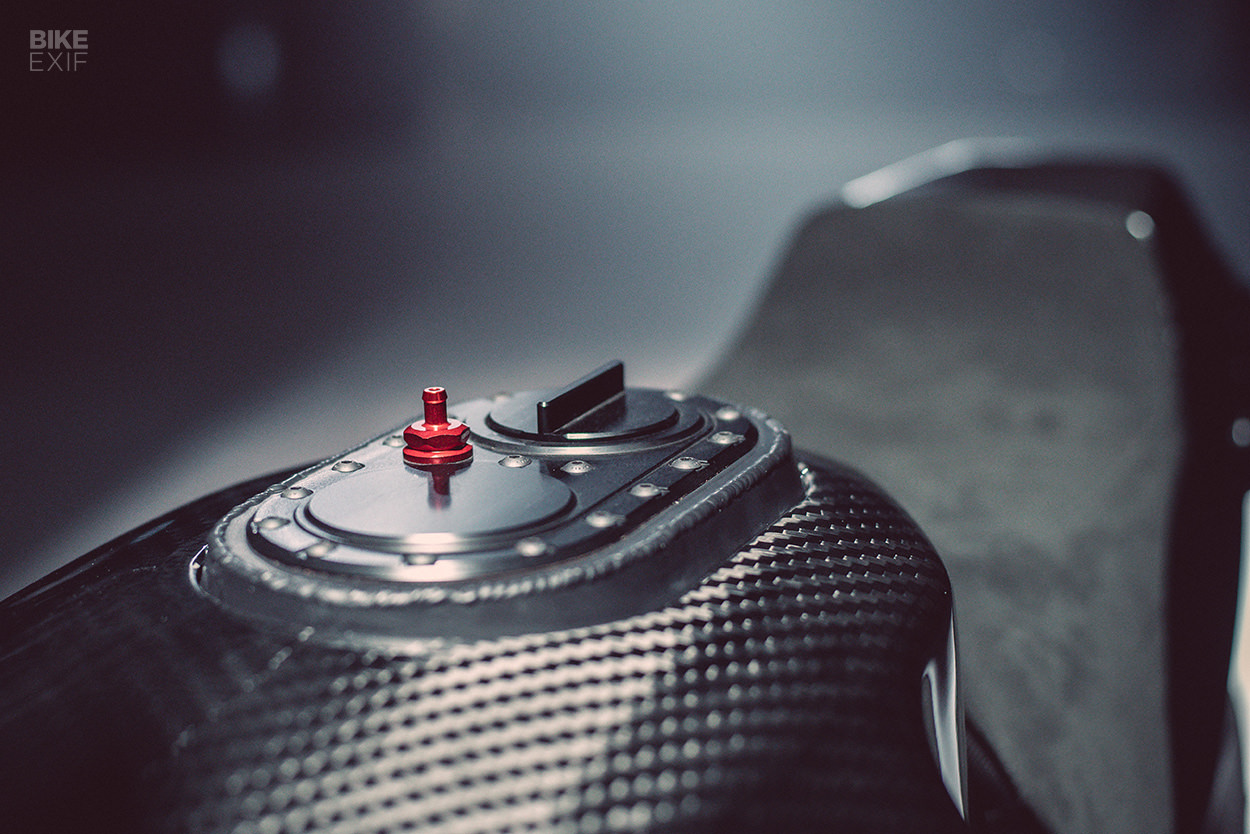 There’s a ton of fabrication hiding under all that carbon fiber too. This FTR 1200 has a hidden aluminum fuel cell, a one-off belly pan, and a custom made swingarm. Just like with his ‘AMA’ project, Brice called on Tim at Vinco Racing to CNC machine the components needed to fabricate all those bits, along with new yokes and chassis reinforcement plates.

The entire exhaust system is from Akrapovič, but it’s no off-the-shelf affair. Brice actually traveled to the exhaust company’s HQ in Slovenia to spec it, and only just made it back to his workshop in Belgium before the country’s borders closed due to COVID-19. 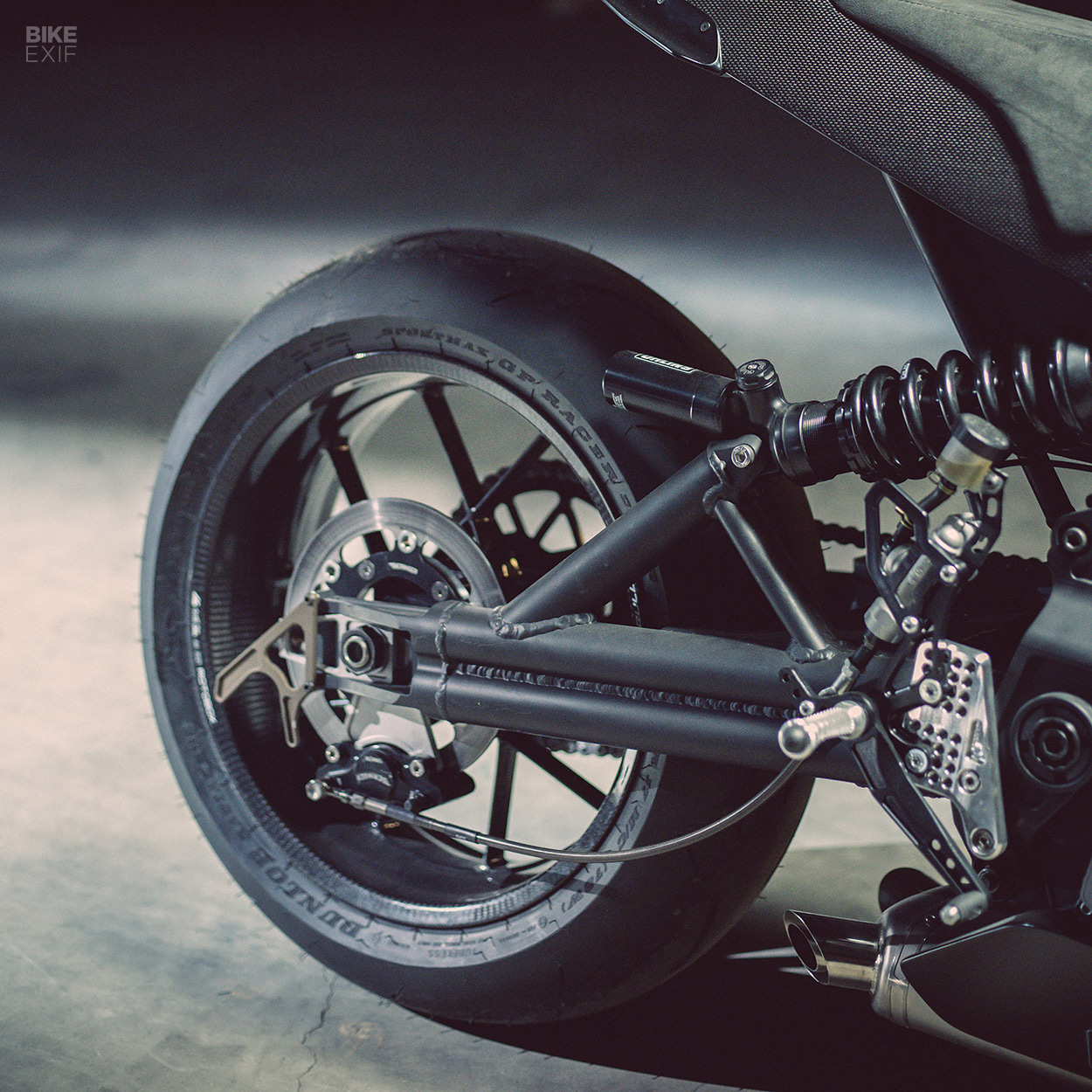 As we’ve come to expect from Workhorse, this FTR is loaded with ultra-desirable parts. Öhlins supplied a set of front forks and a custom piggyback shock for the back, both blacked-out to match the overall aesthetic. And Beringer came to the party with an ultra-light prototype braking system.

The hits keep coming with a gorgeous set of carbon fiber wheels from Rotobox, and a set of Dunlop Sportmax GP Racer tires. 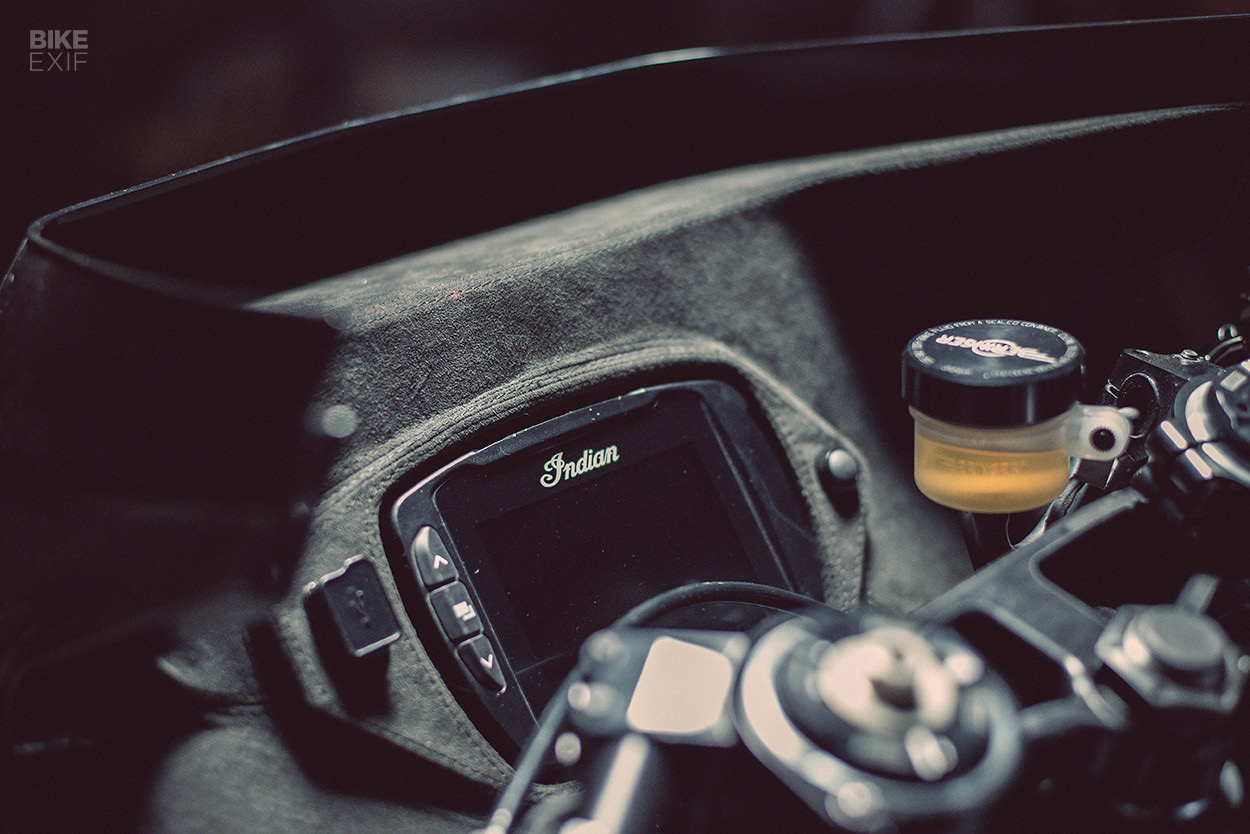 Brice finished the build off with new clip-ons and grips, Beringer controls and tidy bar-end turn signals. Jeroen at Silver Machine Seats covered the seat in Alcantara, then upholstered the dash in the same fabric as a nod to hypercars.

Brice admits that it’s a totally nonsensical addition… but points out that it looks “hella cool.” And we can’t argue with that. 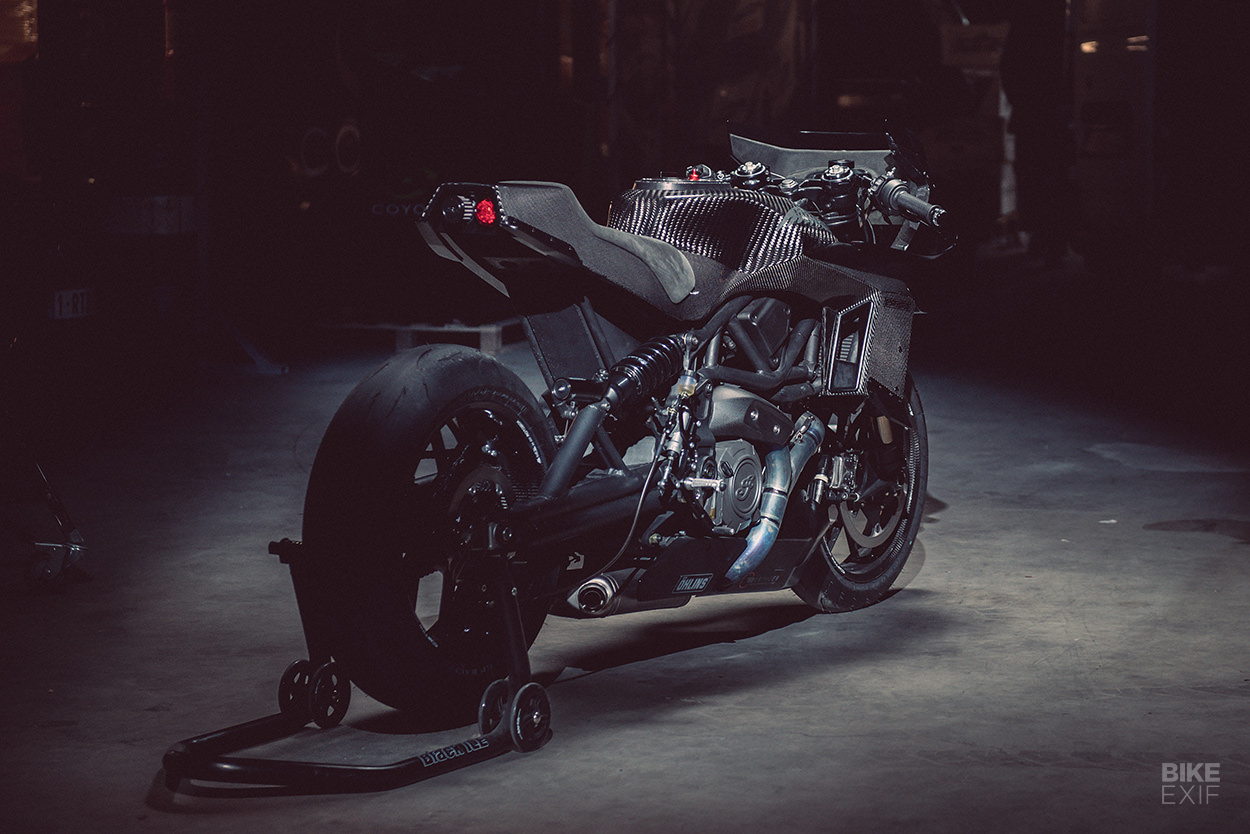 Brice’s other FTR 1200 build certainly stirred the pot, and Black Swan is likely to do the same. But we’re into it. It’s excessive, nostalgic and unapologetic… just the way we like it from Workhorse. 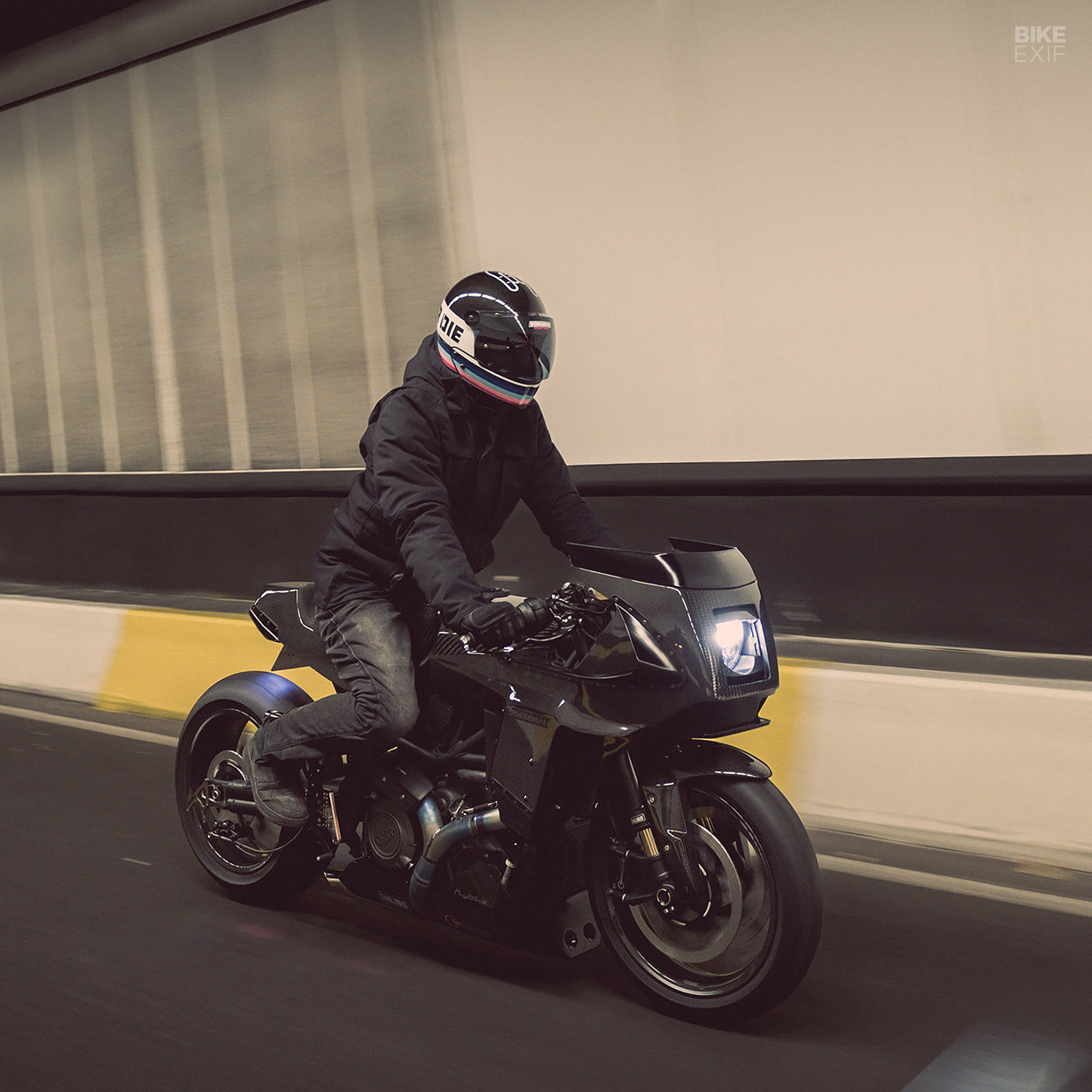