Blurred Lines: Turning a humble 200 into a street tracker 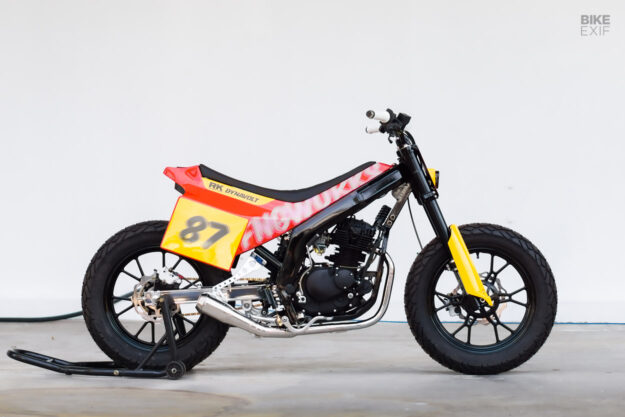 Someone else keen on the flat track style is Irwann Cheng, of the Malaysian custom bike outfit FNG Works. He’s just worked his magic on a customer’s bone stock MLE XTM 200; a Chinese-made supermotard sold in Malaysia. 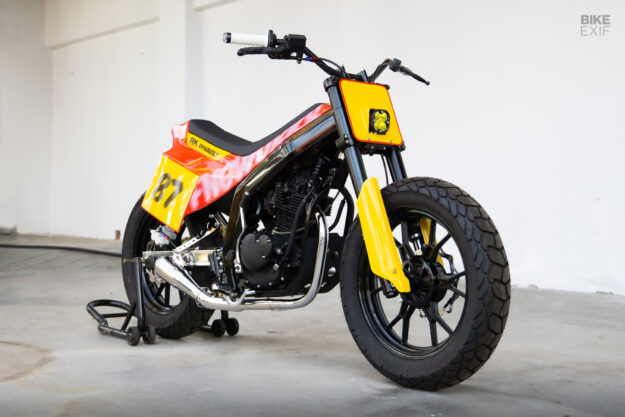 The project was a well-timed one. With the world slowly shutting down a few years ago, Irwann was forced to take on motorcycle work that he didn’t particularly love. Sure, it paid the bills—but it was smothering his creative flame.

Luckily, a customer approached FNG Works for a flat track-style bike. It was just the right project to rekindle Irwan’s love for customization—especially since the customer gave him full creative control. 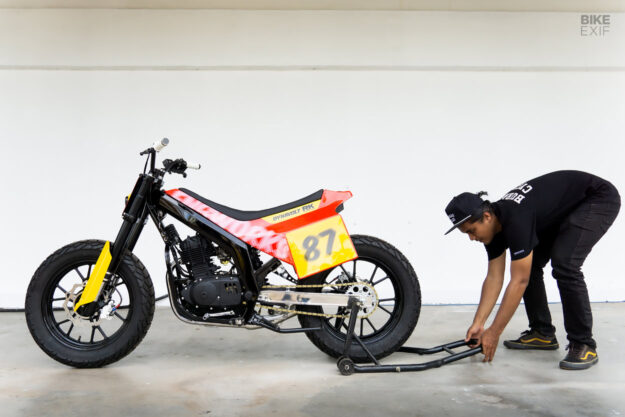 Street trackers are all about stance, so this is where Irwann started. The stock front end was lowered internally by four inches, and the wheels were wrapped in new dual-sport rubber. Irwann chose to stick with the 17” wheels, as he thought that matching 19” wheels would be disproportionate—and it was a good way to keep the cost down.

The MLE’s swooping bodywork design is unusual, but there’s a particular thought process behind it. “The frame of this bike is a twin-spar type,” explains Irwann. “I have seen others make a tank that wraps around the frame to create a horizontal bone line but I decided that instead of working against the frame, I should cooperate with it.” 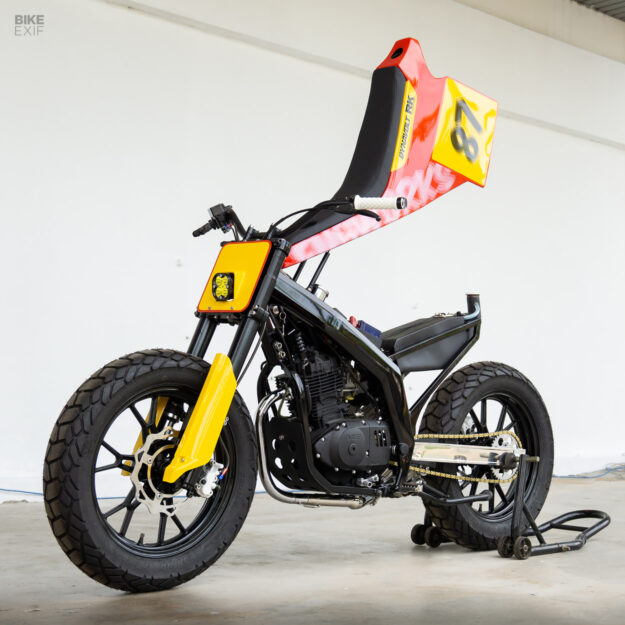 It’s quite refreshing to see someone work with what they’ve got, and Irwann has pulled it off superbly. Instead of making the body out of fiberglass, Irwann decided to stick to what he knows, and build it entirely from metal. The monocoque construction lifts up on gas struts to reveal the genius that lies beneath.

The speedometer, engine electronics and Dynavolt Nano Gel battery are all housed above the engine. The speedometer protrudes through the bodywork—a simple touch that makes so much sense in terms of practicality and design. 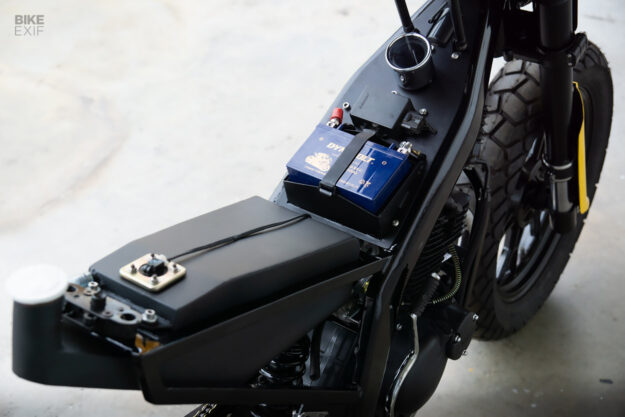 With the electronics up front, there is one glaring omission: the fuel tank. You’ll find it tucked snugly between the rails of the rear subframe. The 7.8 liter go-juice container not only looks cool underneath the tail, but having a rear tank also helps with weight distribution.

The striking bodywork needed a paint job that could keep up. Irwann decided on a red and yellow scheme—a throwback to his younger years spent watching Malaysian Cub Prix racing. We can’t stop looking at it, even if it does hurt our eyes a little. 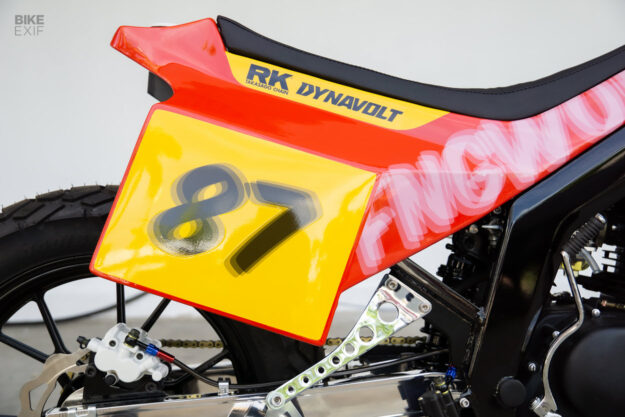 “The ‘FNGWORKS’ and ’87’ were made to look blurry like an out-of-focus camera, because I like the effect,” says Irwann. “I like to imagine, maybe in a race, that it will make the other racers feel dizzy looking at it.”

The number is in reference to the owner’s birth year, and the Dynavolt and RK Takasago logos are a nod to Irwann’s sponsors for this build. The engine and frame were powder coated black, and the swingarm was swapped out for an aluminum unit, which Irwann polished to a shine. Eagle-eyed viewers will spot a clear float bowl on the carb—a nice touch that ties in with the paint scheme. 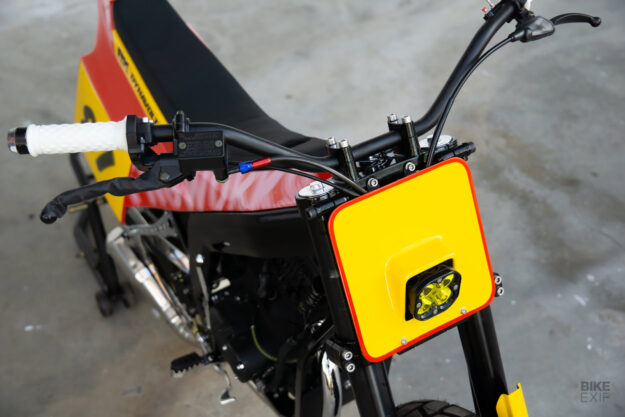 Back up top, the stock handlebars were swapped for a set of blacked-out flat track bars. The switchgear was whittled down to a bare minimum, as was the lighting. Motogadget mo.blaze disc bar-end turn signals run through the bars.

The LED headlight is actually a spotlight that was lifted from a car. Nestled inside the front number plate, it helps the bike look like a proper flat track racer, especially with the trimmed fork guards that Irwann had painted to match. A small LED tail light is buried into the rear of the monocoque. 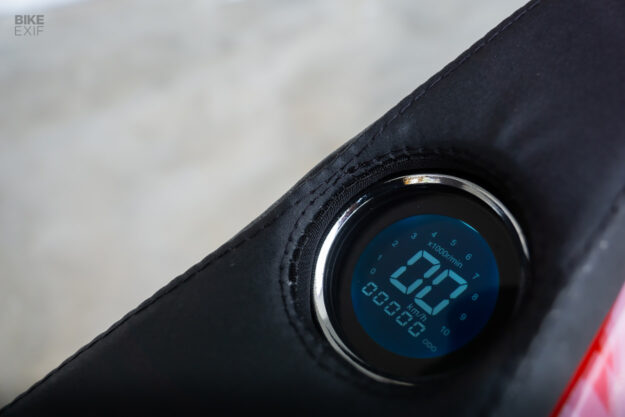 With Malaysia’s mega-popular Art of Speed show on the horizon, Irwann decided to enter the bike. Then, with a mere ten days to go, he hit a road block: the bike wouldn’t start.

Irwann quickly figured out that the 200 cc MLE XTM engine is based on the Suzuki GN125, and that the wiring is a copy of the Suzuki Thunder 125. Armed with that knowledge, he rewired the bike and brought it back to life. 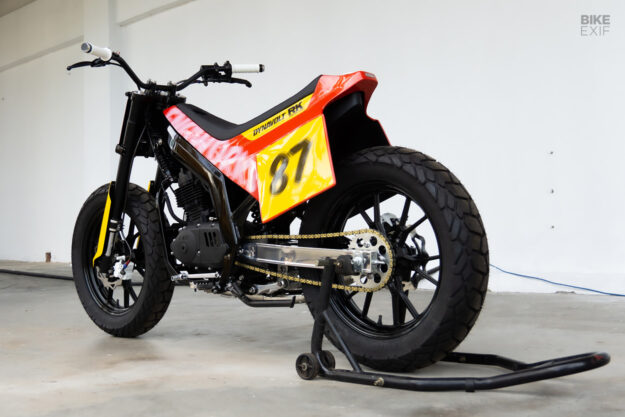 “For the last ten days at the shop, with only two to three hours of sleep every day, I hustled to finish the bike,” states Irwann. “I didn’t even celebrate by birthday with my wife and son. I felt like I was on the other side of the world, even though they were only about 30 minutes away.”

The juice was certainly worth the squeeze. FNG Works bagged the International Guest Favorite Pick of the Show award, chosen by Mama Tried’s Scott Johnson, along with three other awards. If we were there, we surely would have picked it too. 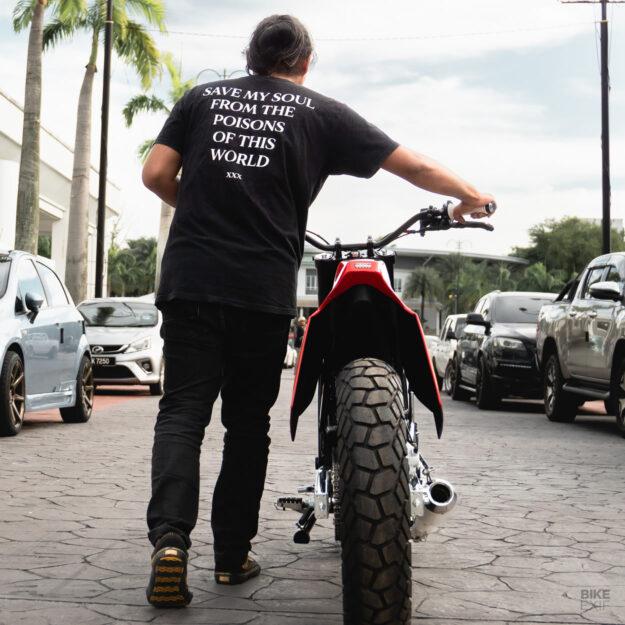