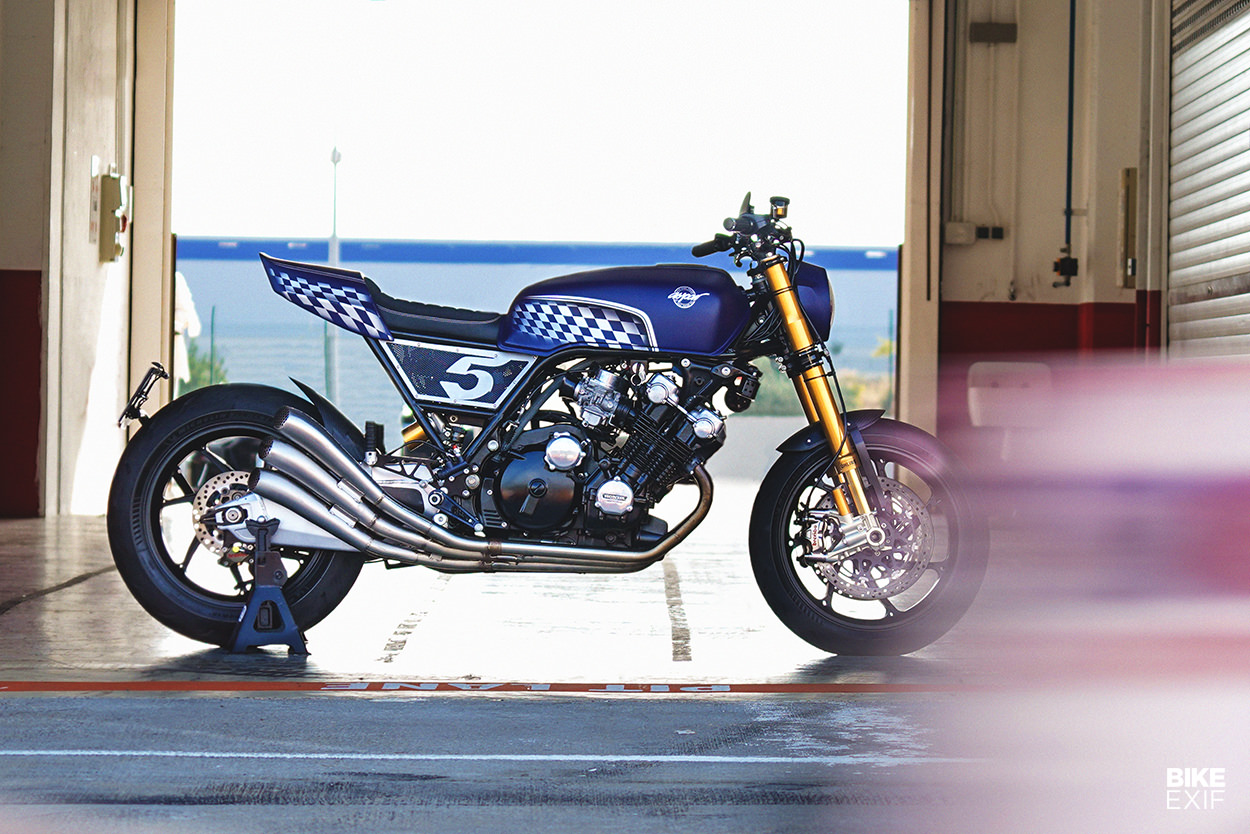 One thing we rarely talk about in the custom world is the ability of the rider. But maybe we should. Because a client who takes a Gixxer to track days and runs fast laps is unlikely to be happy riding a retro roadster with Firestone tires and a flat spot in the middle of the rev range.

So when we heard that Bolt Motor Co. had built a bike for a four-time World Champion, we were intrigued. Their client was Jorge Martínez Salvadores, known as ‘Aspar,’ and the bike is a 1981 Honda CBX1000 inline-six. It’s over 40 years old, but undoubtedly well-sorted. 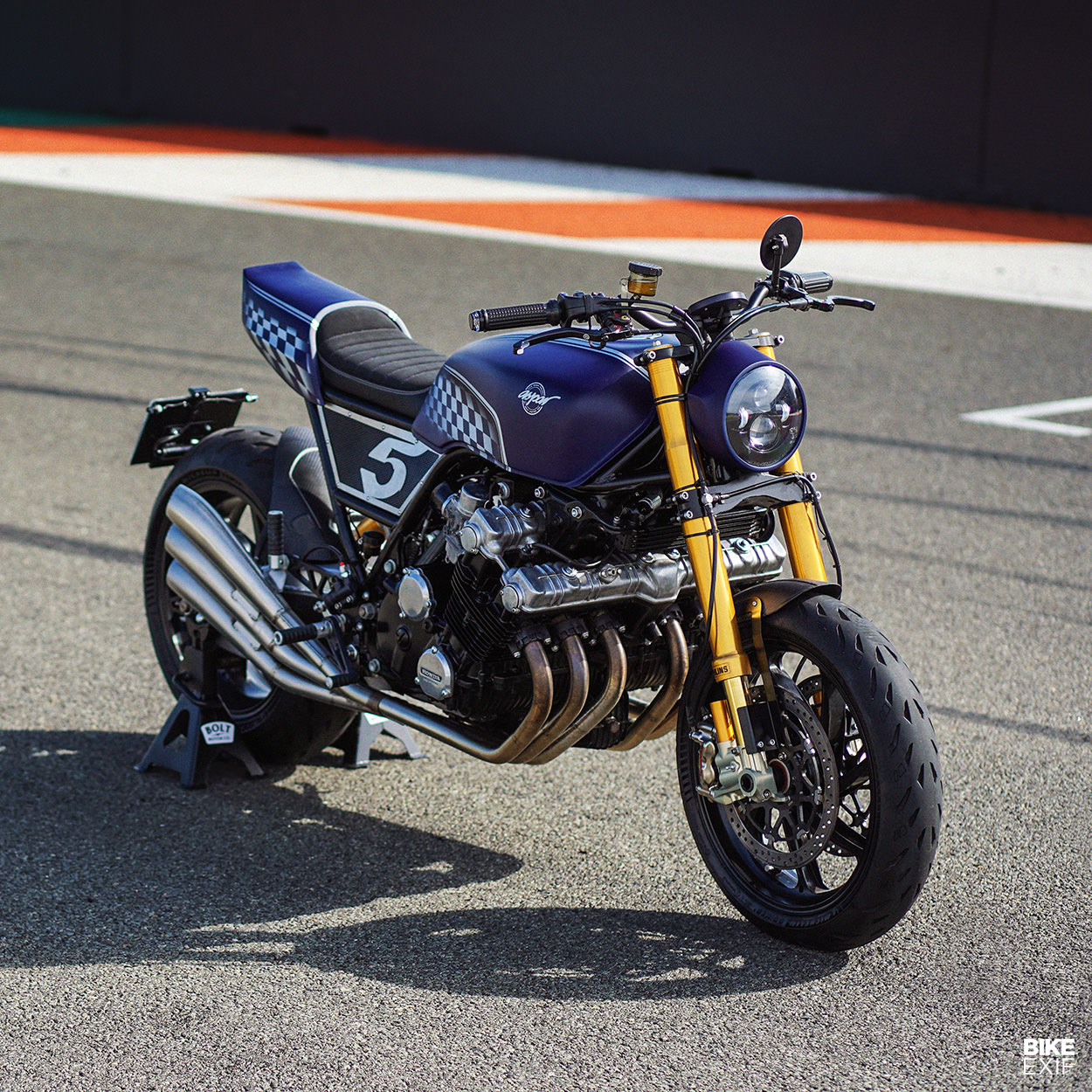 ‘Aspar’ is an official Dorna MotoGP Legend, alongside guys like Agostini, Doohan and Hailwood, and today he runs the Aspar racing team. The man with the tricky task of designing a bike for him was Bolt boss Adrián Campos, who has something of a head start in this territory: he also runs a racing team, but focused on F2 and F3 cars.

The first job was to choose the bike. Adrián and Aspar settled on one of the finest old school muscle bikes of all time, the mighty CBX1000. 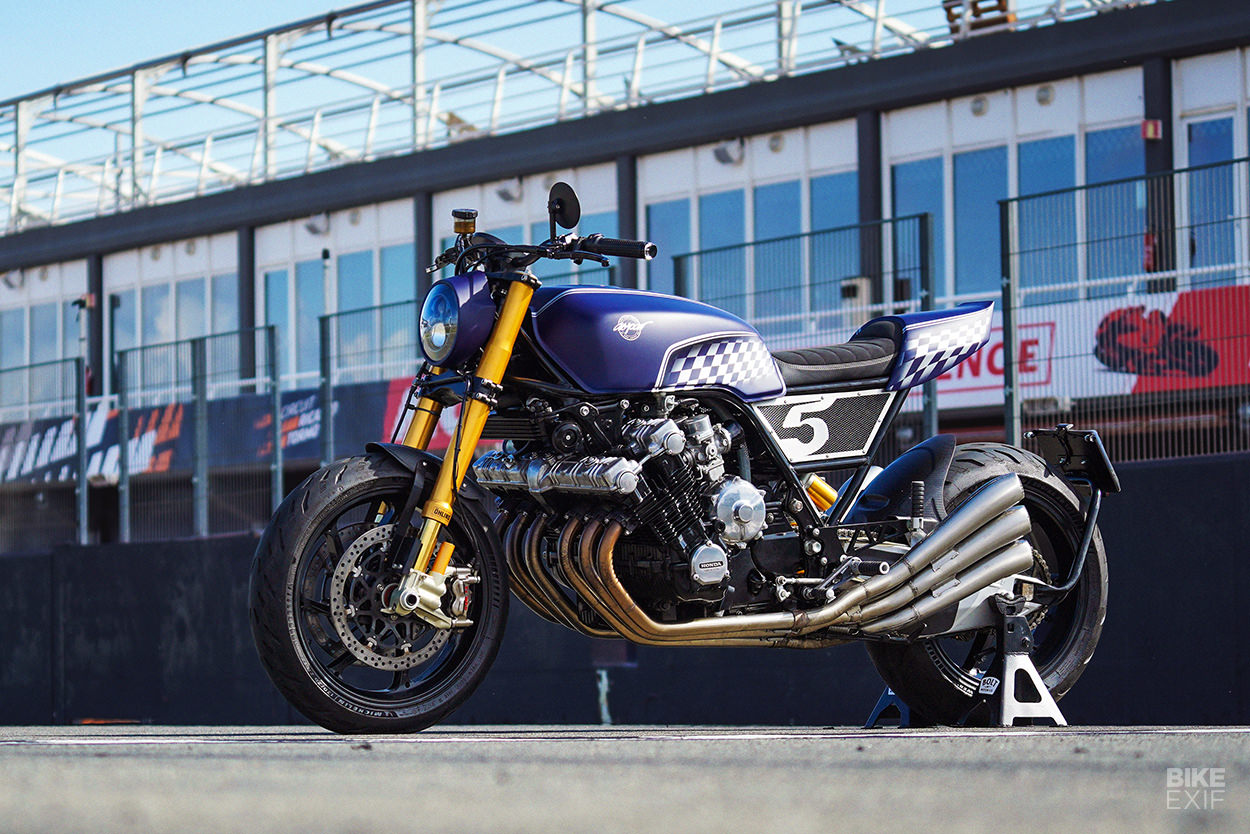 Adrián is well aware of the history of this machine. “The CBX1000 was designed by Shoichiro Irimajiri, an engineer also responsible for the bikes that Taveri and Hailwood rode when they won the 1966 and 1967 championships,” says Adrián.

“Irimajiri became managing director of Honda, and led the CBX project. It has a generously sized engine suspended from a steel chassis…and that six-cylinder is difficult to access. Just ask our mechanics!” 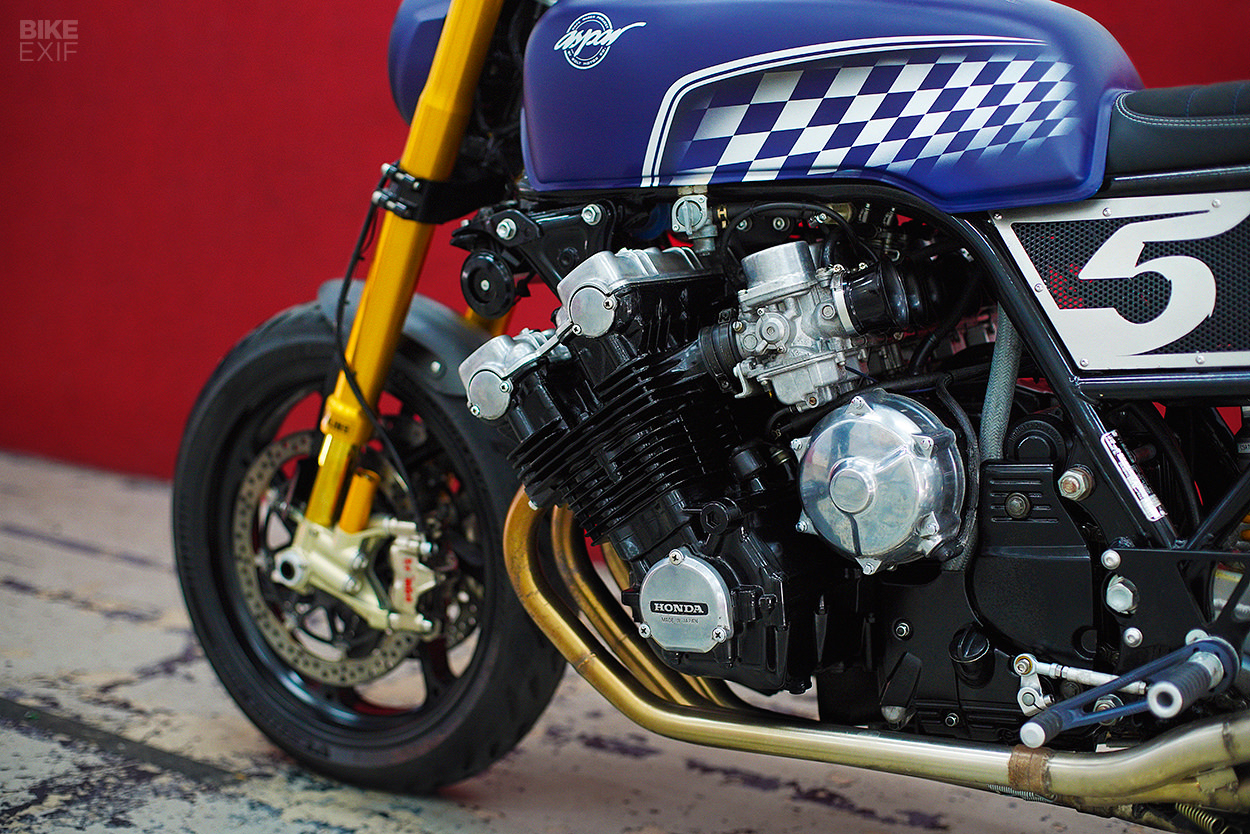 Despite those difficulties, the immaculately restored air-cooled 1047-cc motor looks like new, with six gleaming Keihin VB-61A carburetors fitted with custom intakes. And even though the engine is only a couple of inches wider than the four-cylinder CB750, it looks extremely imposing.

There’s just over a hundred horsepower on tap, which is plenty enough for Aspar. Back in the day, Cycle World managed the quarter-mile in 11.6 seconds, and topped 130 mph for the first time on a production bike. Those figures are still respectable today. 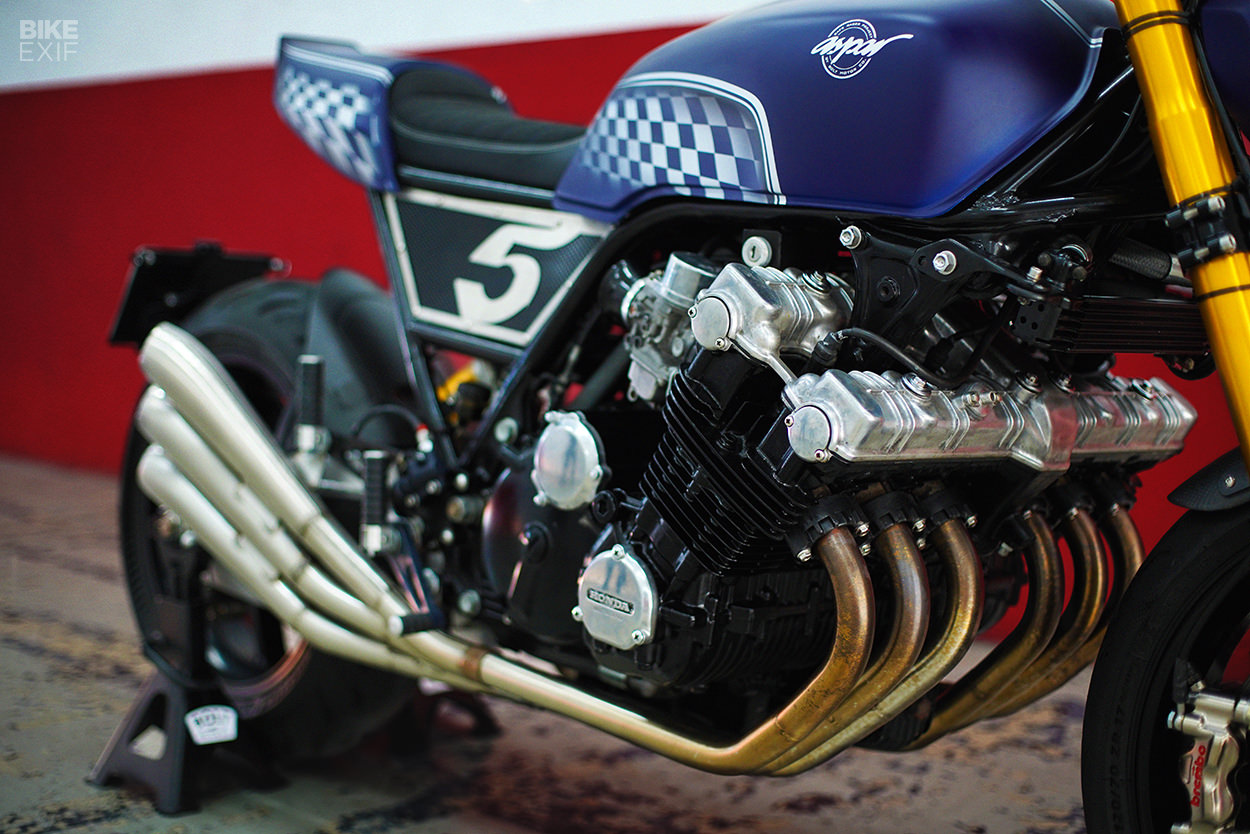 So Bolt have left the engine internals alone, and restricted their drivetrain mods to a lightened flywheel and new end cans—with three free-flowing and slightly curved mufflers on each side of the CBX.

“These are handmade exhausts,” says Adrián. “Aspar let us advise on aesthetics and finishes, but the sound and sensations he was looking for were very clear to him. His face when he heard the bike for the first time was priceless.” 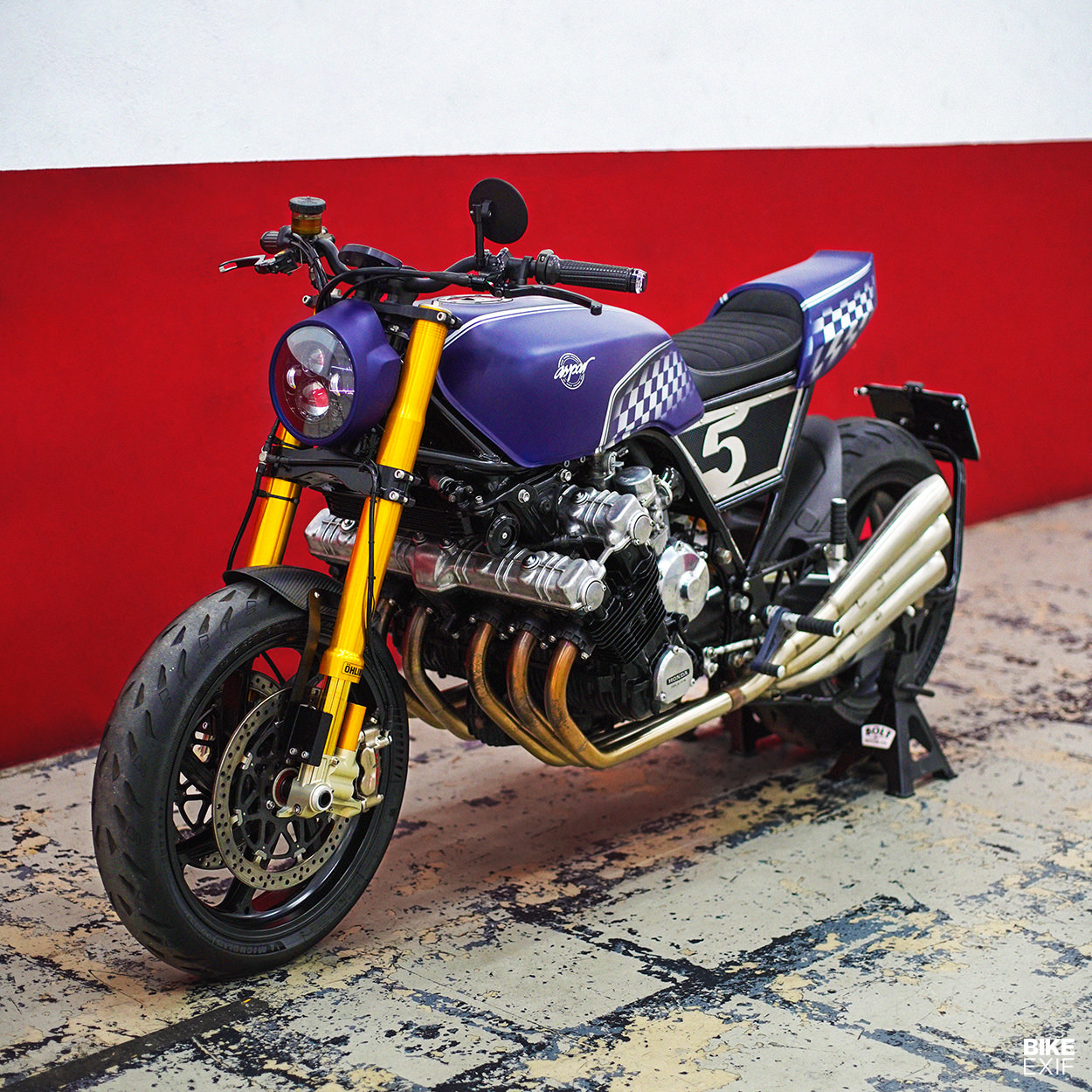 The suspension is an even bigger departure from stock. The original 35mm fork tubes were undersized on the CBX, especially given that the engine is ‘hung’ from the top of the frame. So Adrián and Aspar spun their Rolodexes and went hunting for MotoGP parts.

The forks are now Öhlins units from an Aprilia MotoGP bike, with a Moto2 front wheel. The carbon fender is a one-off, but the Brembo front brakes are donated from a Yamaha MotoGP bike. The hoses are Goodridge: “All machined, tuned, balanced and tested by the Bolt team,” says Adrián proudly. 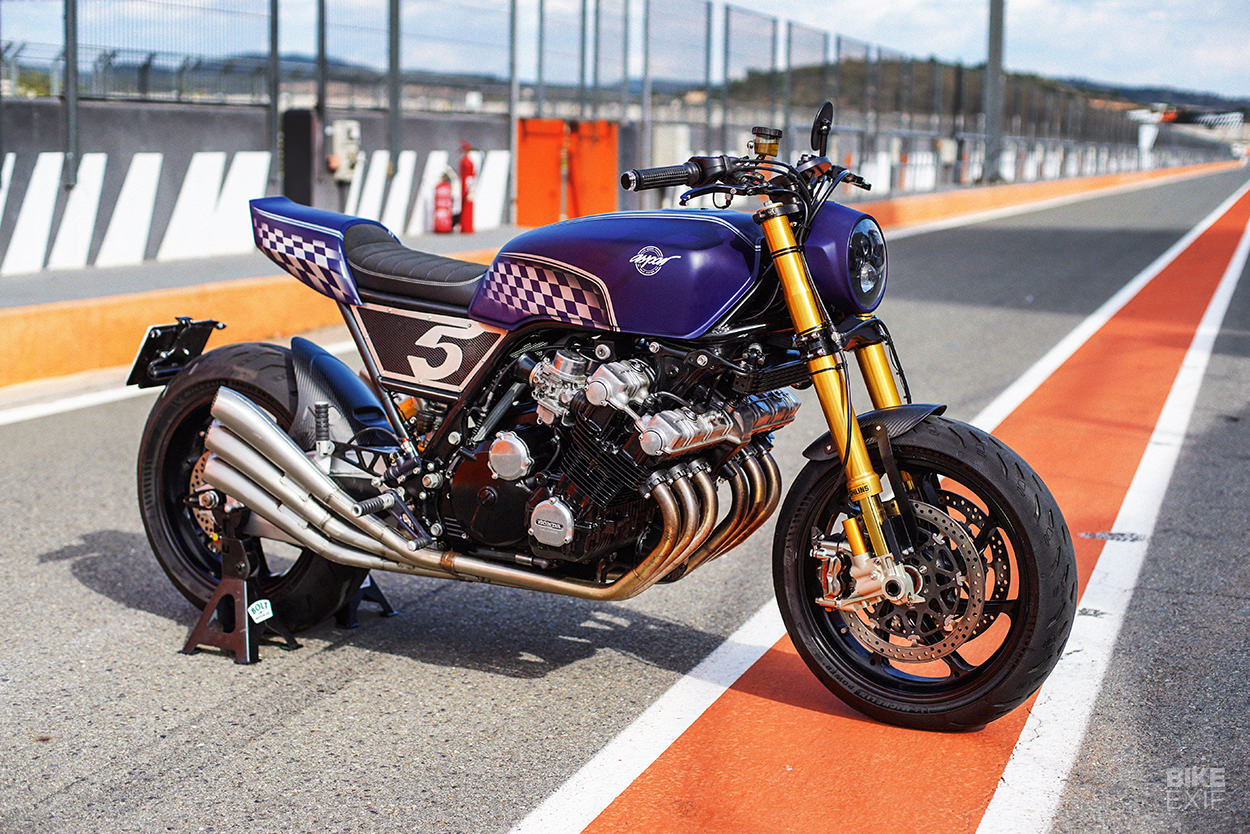 You might expect to find clip-ons too, but despite the sporty Brembo controls, the bar setup is more relaxed. “Aspar was looking for a striking but comfortable motorcycle, so we decided to use straight bars—for comfort and practicality.” The headlight fitted snugly between the fork tubes is a modern LED unit, attached using 3D-printed brackets.

The swingarm looks rather fancy, and it is—it was plundered from the same Aprilia MotoGP bike as the forks. (“Fitting that swingarm to a Honda CBX was not an easy job, but the result could not be more spectacular!”) 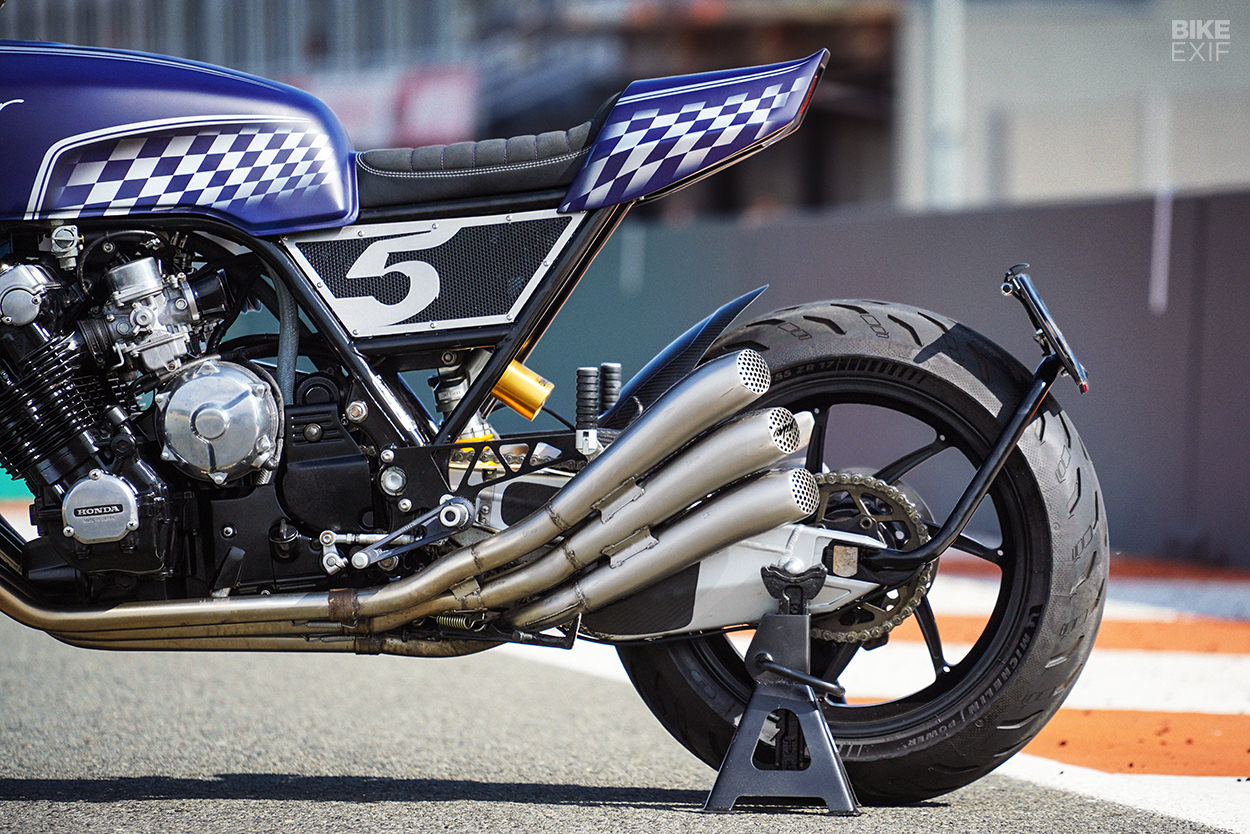 The rest of the back end bears little resemblance to the bulky posterior of the factory CBX1000. The new subframe is narrow, propped up by CNC-machined supports. The removable tail unit is virtually a flush-fit, with a passenger seat underneath and a discreet LED brake light out back. “The tail was designed in 3D and manufactured to make everything fit together perfectly.”

Bolt opted to keep the CBX’s bulky gas tank though. “We wanted to stand out by mounting a classic tank,” says Adrián. “In this way, we give even more prominence to the iconic six-cylinder engine.” 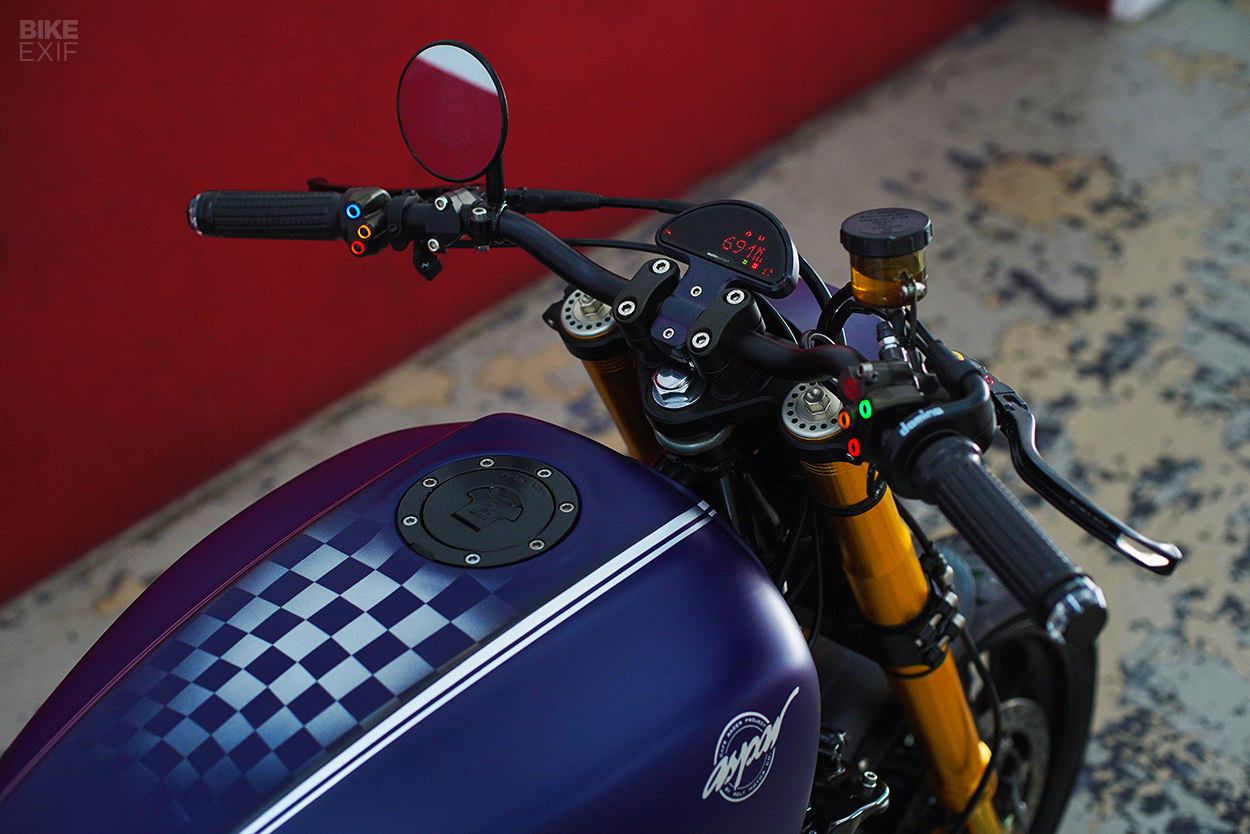 The familiar semi-circle of the Motogadget Motoscope Pro gives Aspar all the info he needs while riding, and the German company also supplied the indicators, grips and sundry electronics to complete the brand-new electrical installation. Every inch of the wiring has been checked over or replaced, along with all the electrical components.

Given the client’s racing pedigree, the final flourish of paint has obvious track connections. “Aspar was looking for a tank inspired by the paint that Red Bull uses on their cars,” says Adrián. “We added the checkered flag to make it clear that racing will always be in his DNA, and on his bike.” 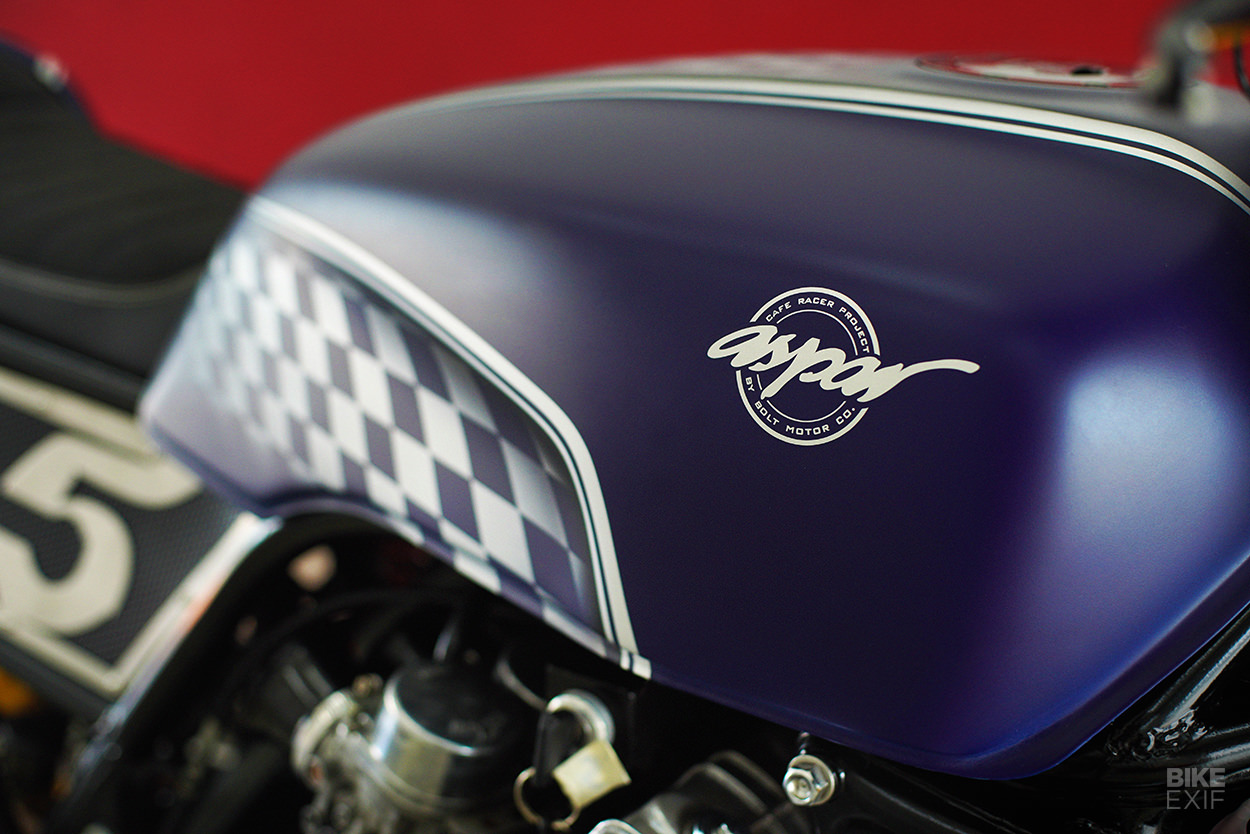 It must have been intimidating to build a bike for a guy who has 37 Grand Prix victories to his name. But if anyone could do it, it would have to be Adrián and the Bolt crew. And best of all, you just know that this machine is not going to be pottering around the back roads in second gear. 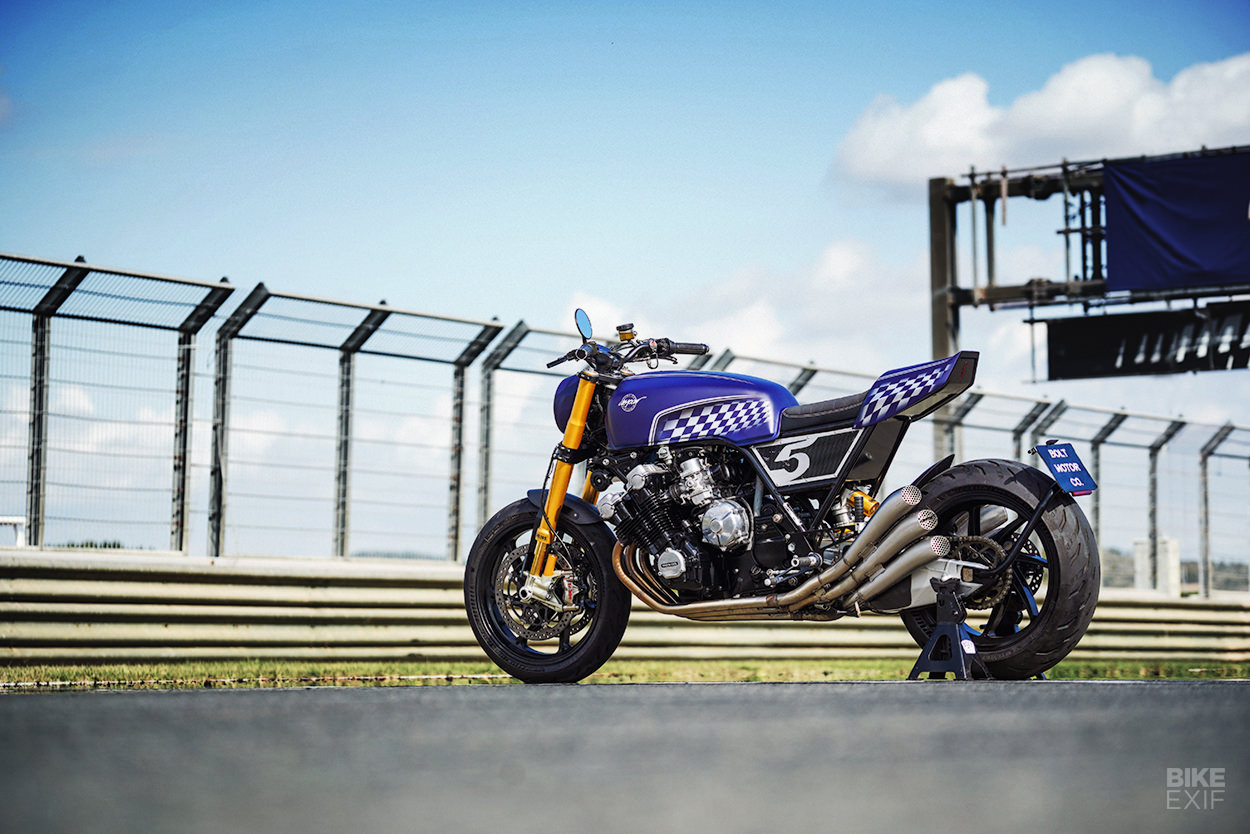