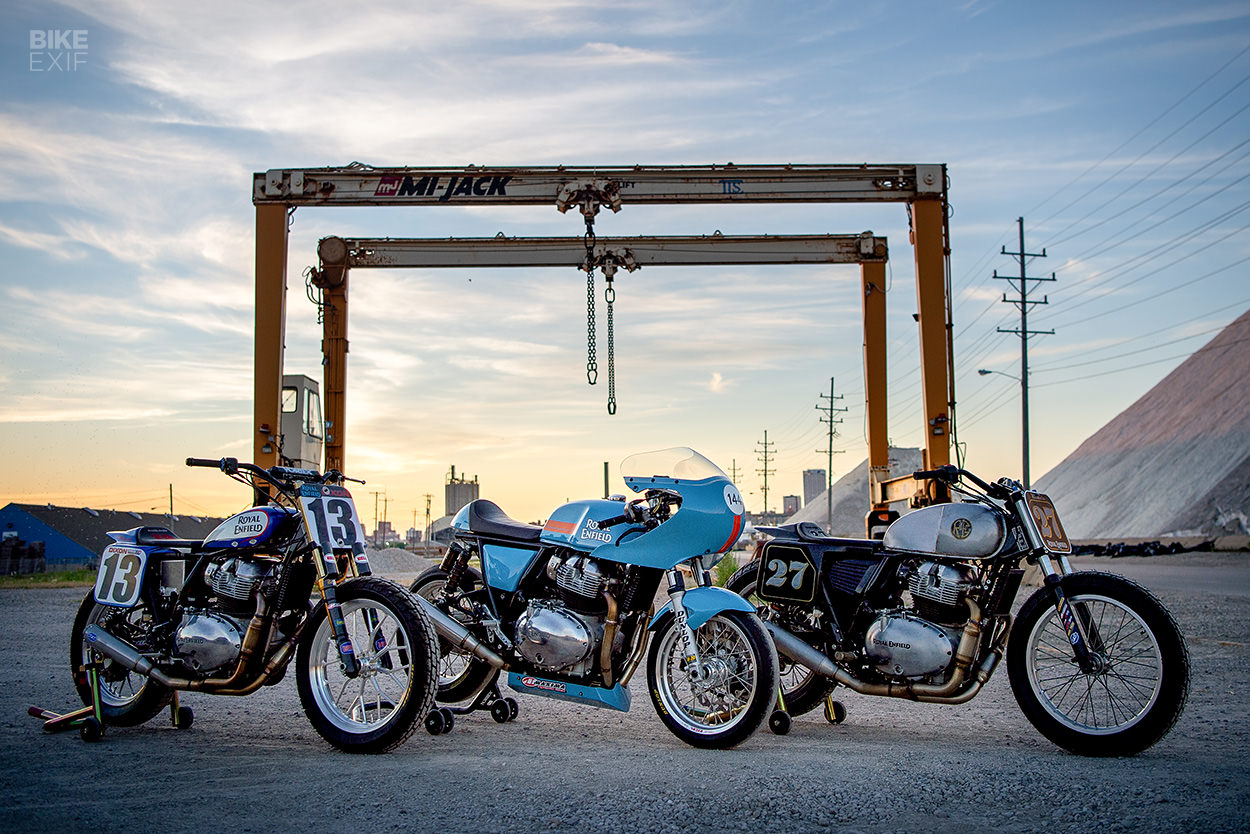 We love Royal Enfield North America’s Build. Train. Race. program for two reasons: it shines the spotlight on women in motorcycling, and it produces killer bikes. Now in its second season, it’s a grassroots initiative where a selection of women riders are each given a Royal Enfield 650 twin to customize for racing. Then they spend some time training, before duking it out on the track.

Last year’s edition of BTR stuck with flat track racing only, but Royal Enfield have now added road racing to the list. 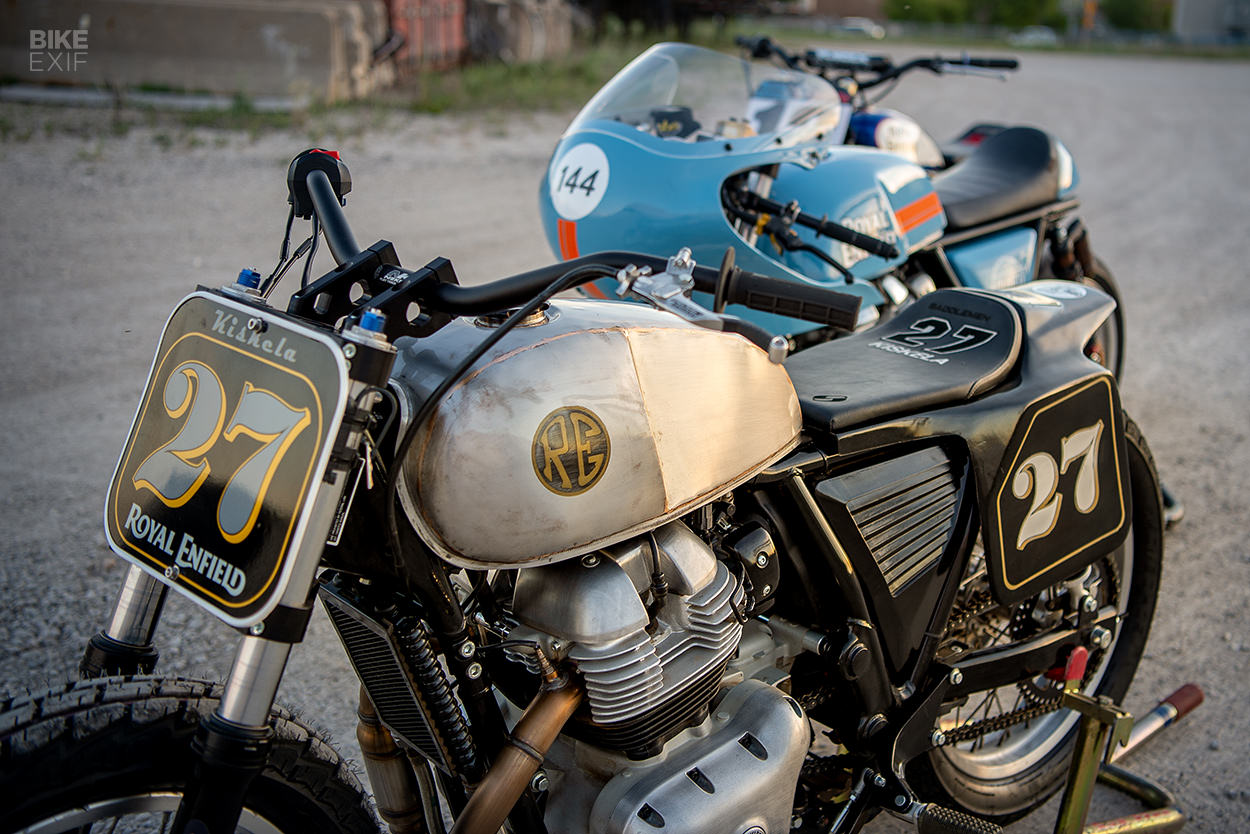 The full roster includes 16 women in the US and four in Brazil, and the bikes are the INT 650 (called the ‘Interceptor’ outside of America) for flack track, and the Continental GT for road racing. Both bikes share Royal Enfield’s 47 hp / 52 Nm 648 cc parallel-twin motor, and both are ripe for customization—as many custom builders have already proven.

Twenty motorcycles is too much to cram in here, so we’ve picked three of our favorite BTR machines; two flat trackers and one road racer. 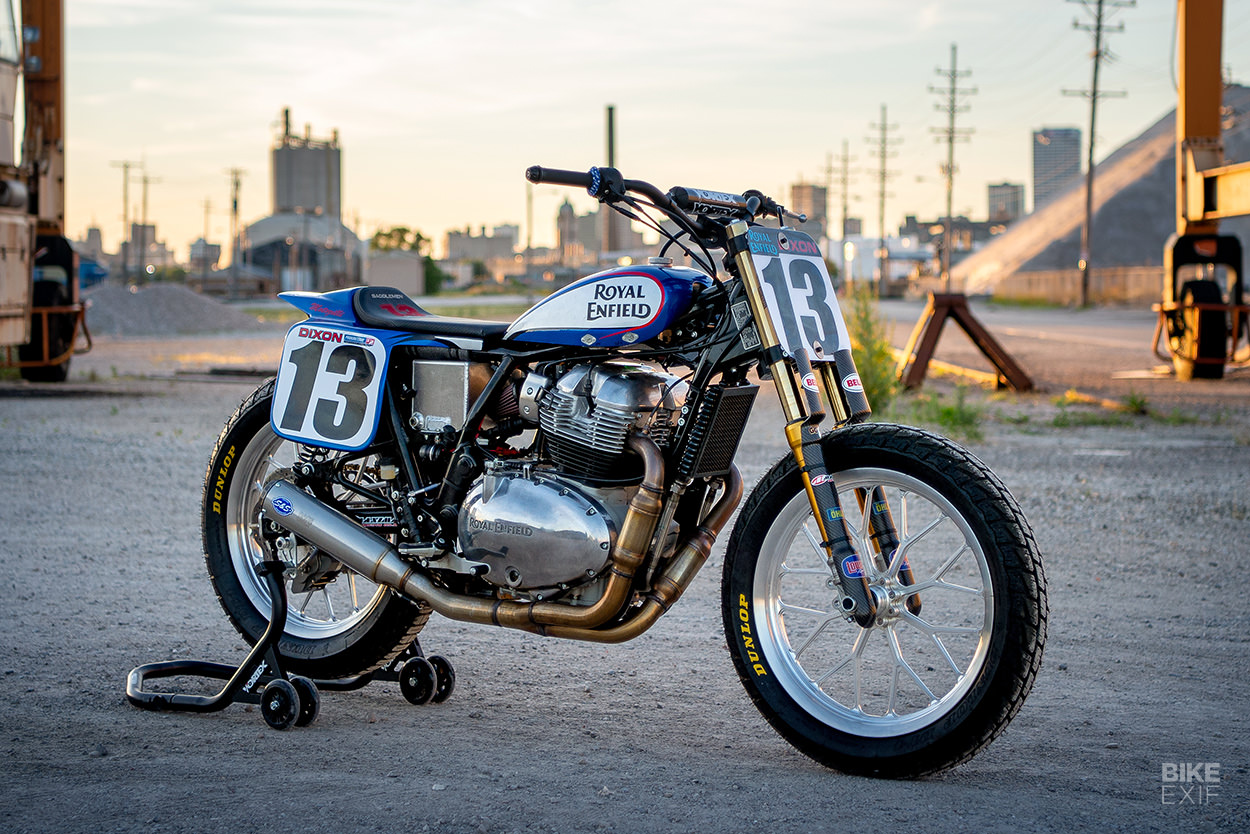 Sarah Dixon’s flat tracker Sarah Dixon earns a living as a medical transportation driver, but racing is in her genes. Her mother was a drag racer, her father competed in flat track at a national level, and her grandfather was a racer—so Sarah’s been on two wheels from the age of two. So it’s little wonder that her race bike has a quintessential American flat track vibe to it.

Sarah’s INT 650 owes its new lines to a XR750-style fuel tank from First Klass Glass, and classic flat track-style tail unit. The seat and tail come from project sponsors Saddlemen, who also embroidered each racer’s number onto their seat pad. 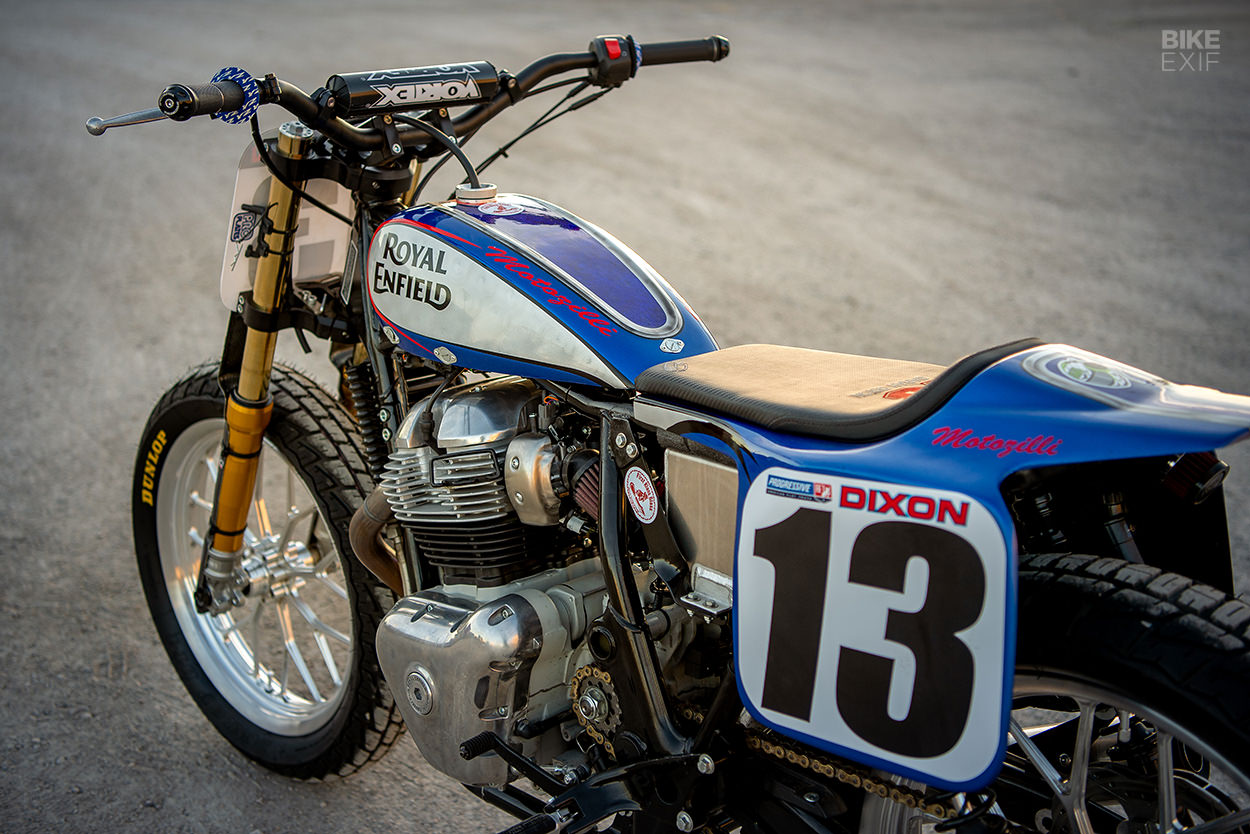 The tank’s been cut open and merely acts as a cover for the rewired electronics. So the gas cap is just there for show; fuel’s now stored in a custom-made fuel cell under the seat. The subframe’s been fettled to match the tail section, and the main frame’s been de-tabbed.

The Royal Enfield now rolls on custom 19” wheels from Lowery with Dunlop tires, and with Öhlins suspension at both ends. 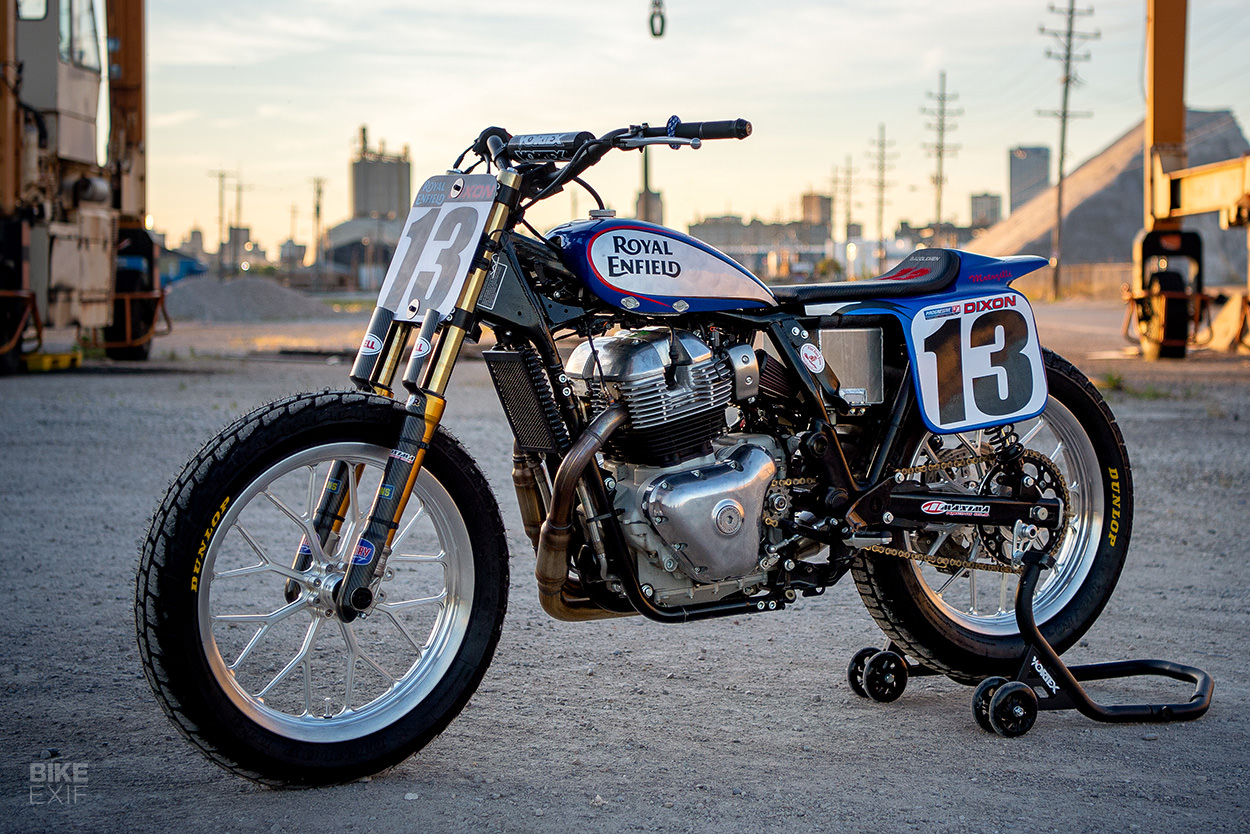 Other mods include extended rear axle slots to wedge the bigger wheel in, and an oversized rear brake. The sprockets are from KTM and Yamaha’s catalogues, fitted with a custom rear carrier.

Up in the cockpit you’ll find Vortex handlebars, mounted on pullback risers that sit on an Indian triple clamp set from S&S Cycle. The front ends’ finished off with a number board, and a pair of fork covers from Goons Glass. 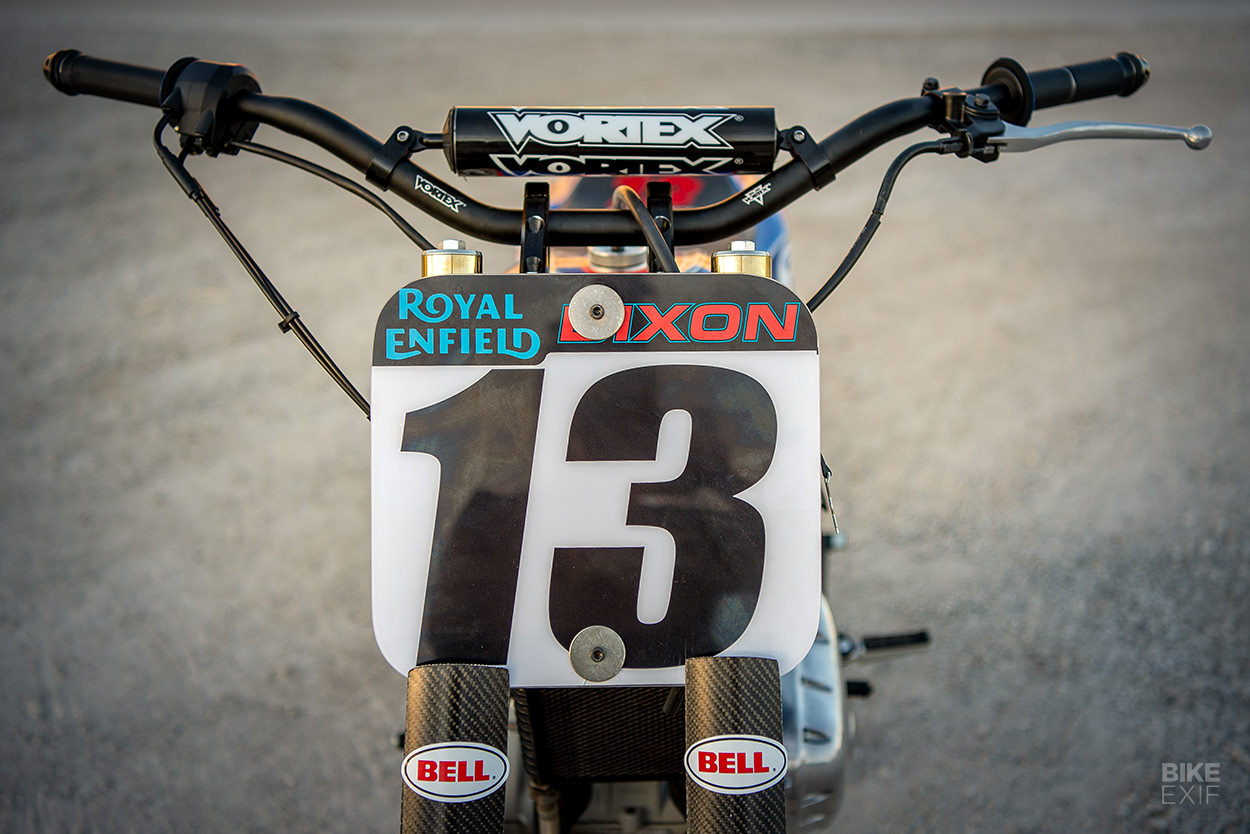 Entrants aren’t allowed to mess with the INT 650’s engine internals, but they can fit some performance mods. Sarah’s bike runs K&N pod filters, custom mounted to wedge into the limited space between the intakes and fuel cell. The gnarly two-into-one exhaust comes from BTR sponsors S&S Cycle, who supplied systems for all the racers. 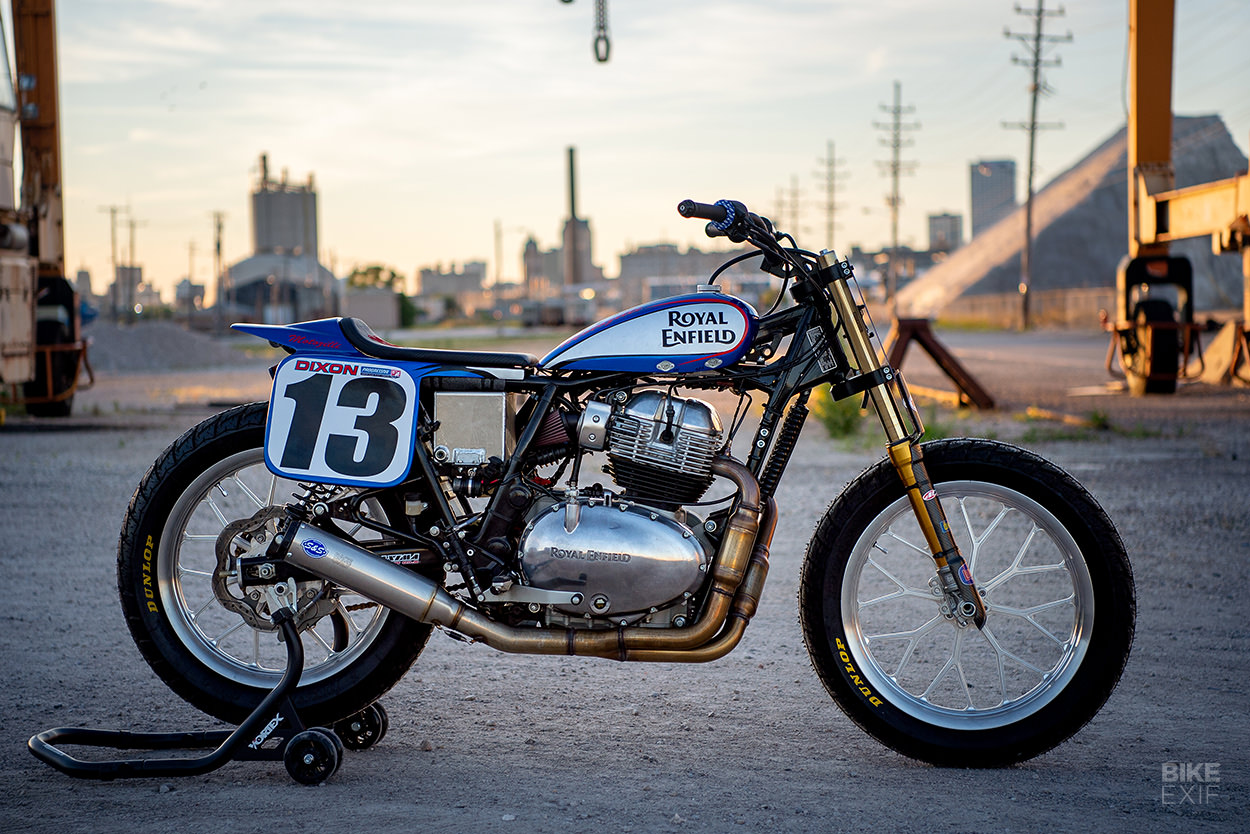 Sarah’s bike’s finished in an all-American red, white and blue livery by Randy Atkinson, with polished wheels to match the motor, and a hit of gold on the forks. It looks stunning and goes like stink too—Sarah’s already bagged a third place finish on it. 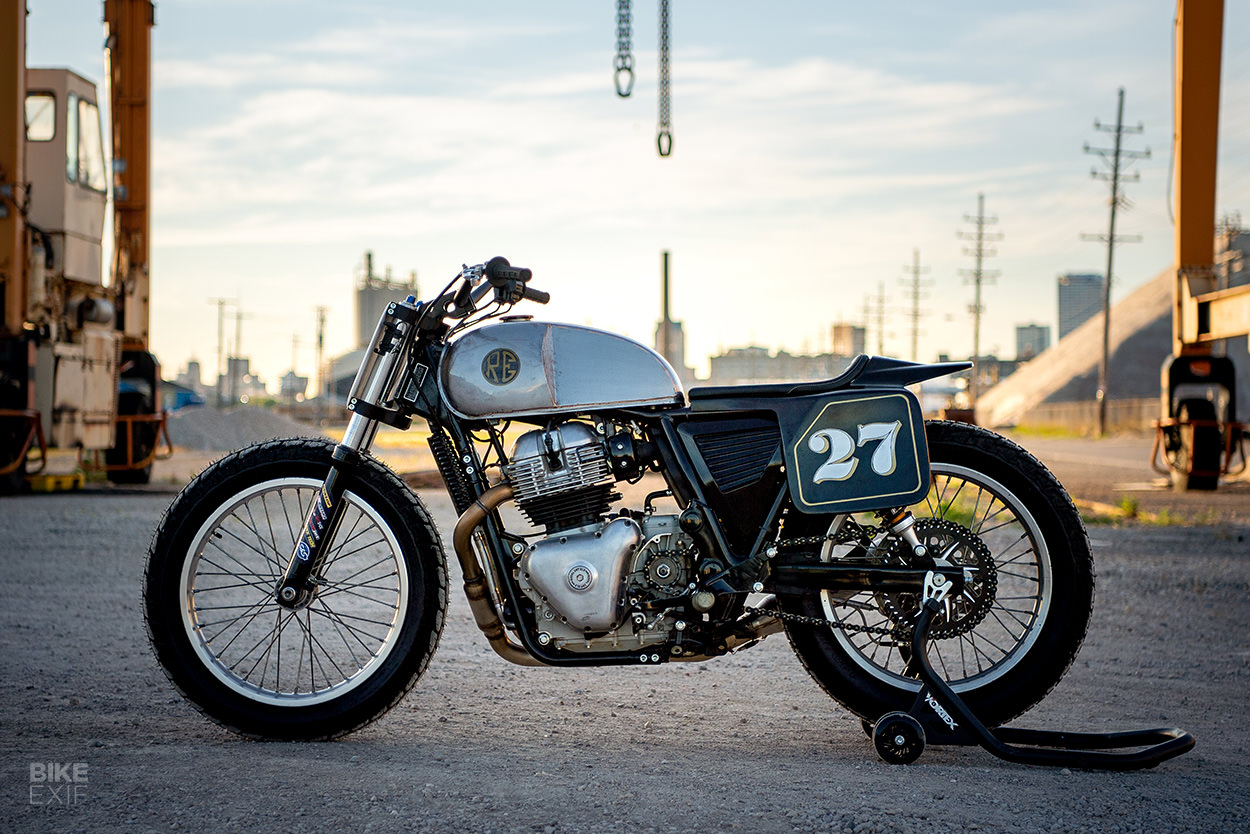 Nean Kiskela’s flat tracker Don’t let her 4’11” frame fool you—Nean Kiskela is a formidable competitor. She used to own her own moto repair and custom shop, but has been working at Icon Motosports in Portland for the last five years. And since her small home shop is overflowing with dirt bikes, Icon let her build her INT 650 flat tracker at the office’s spacious workshop—with help from her friends John and Davin.

“This bike is my first brand new street bike,” Nean tells us. “Before this, I had only had one brand new dirt bike—and that’s just not the same. At one point I remember thinking to myself ‘how the hell can I tear this thing apart when it’s just so nice?!’ But honestly, there was no time to think—it had to be done.” 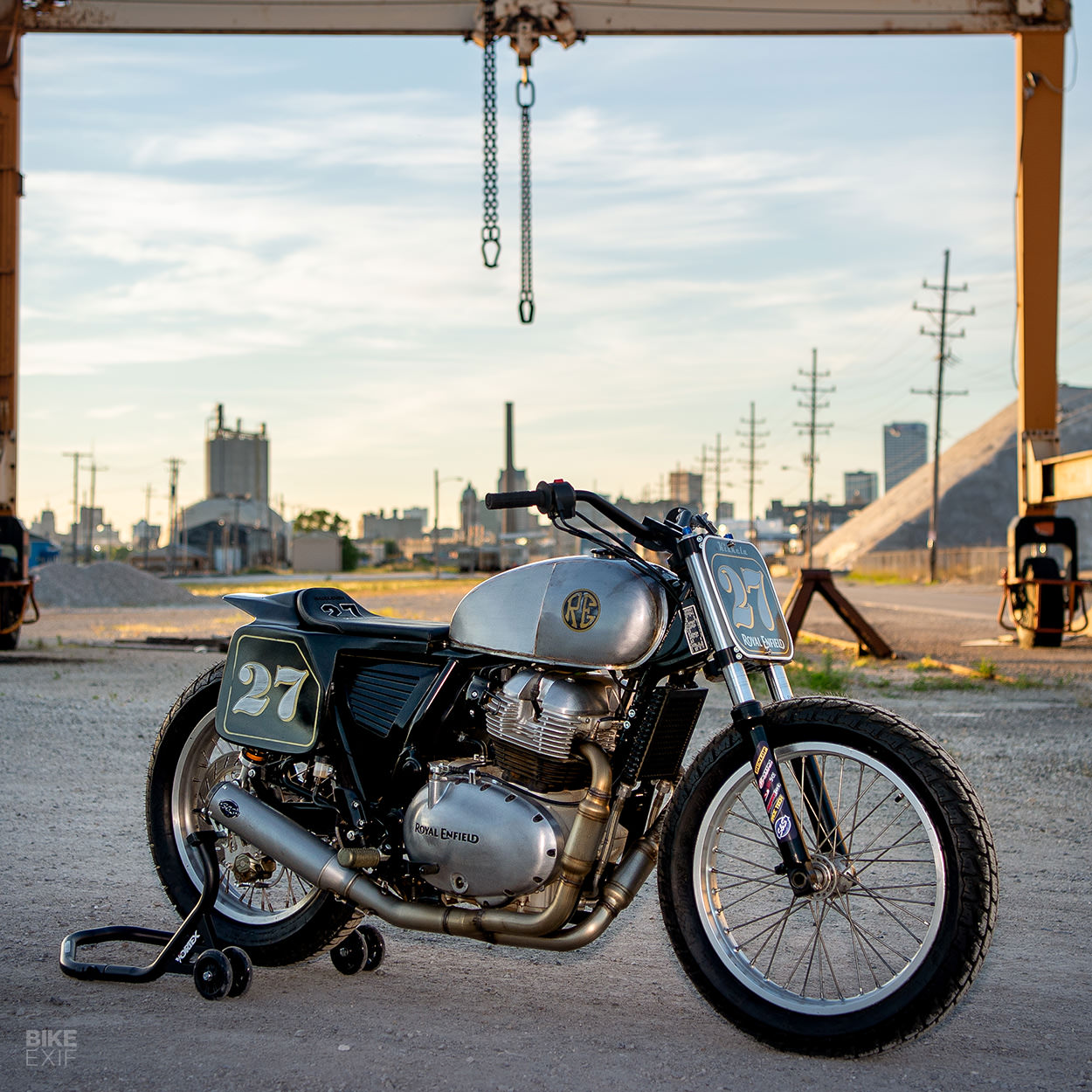 Nean kicked off her build with a couple of parts from the program sponsors: the Saddlement tail section and the S&S Cycle exhaust system. Next up was a Dynojet Power Commander V unit and a Quick Shift kit, along with a high-flow air intake from S&S.

Jeff at Z Moto Suspension worked on the suspension, by lowering and re-valving a set of Yamaha R6 forks and the OEM rear shocks. The forks are held by a set of S&S Cycle yokes, with a set of extreme pullback risers to put the bars closer to Nean. The handlebars are Neken Jared Mees replicas—also picked for their generous sweep, and trimmed by about an inch and a half. 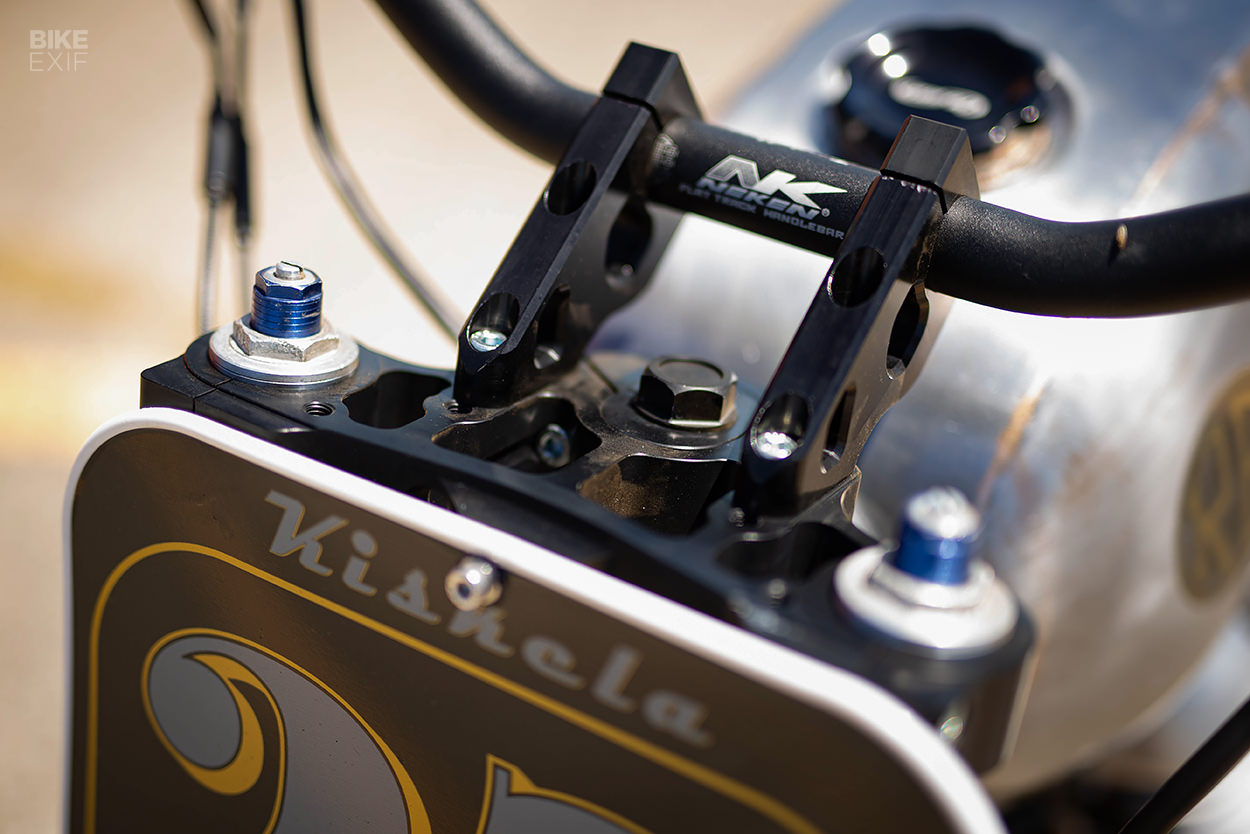 Nean had planned to run alloy wheels, but there wasn’t enough time to machine the various parts that would have made them fit. So Erik Moldenhauer at Royal Enfield sent a used set of spoked aluminum hoops, while Nean’s friend John Raines helped fabricate all the little bits to make them fit. The setup includes a Banke Performance quick-change sprocket adapter, Vortex sprockets, a brake hanger from KE Motorsports, a used Brembo caliper, and a custom brake line from Oil Filter Co in Portland. 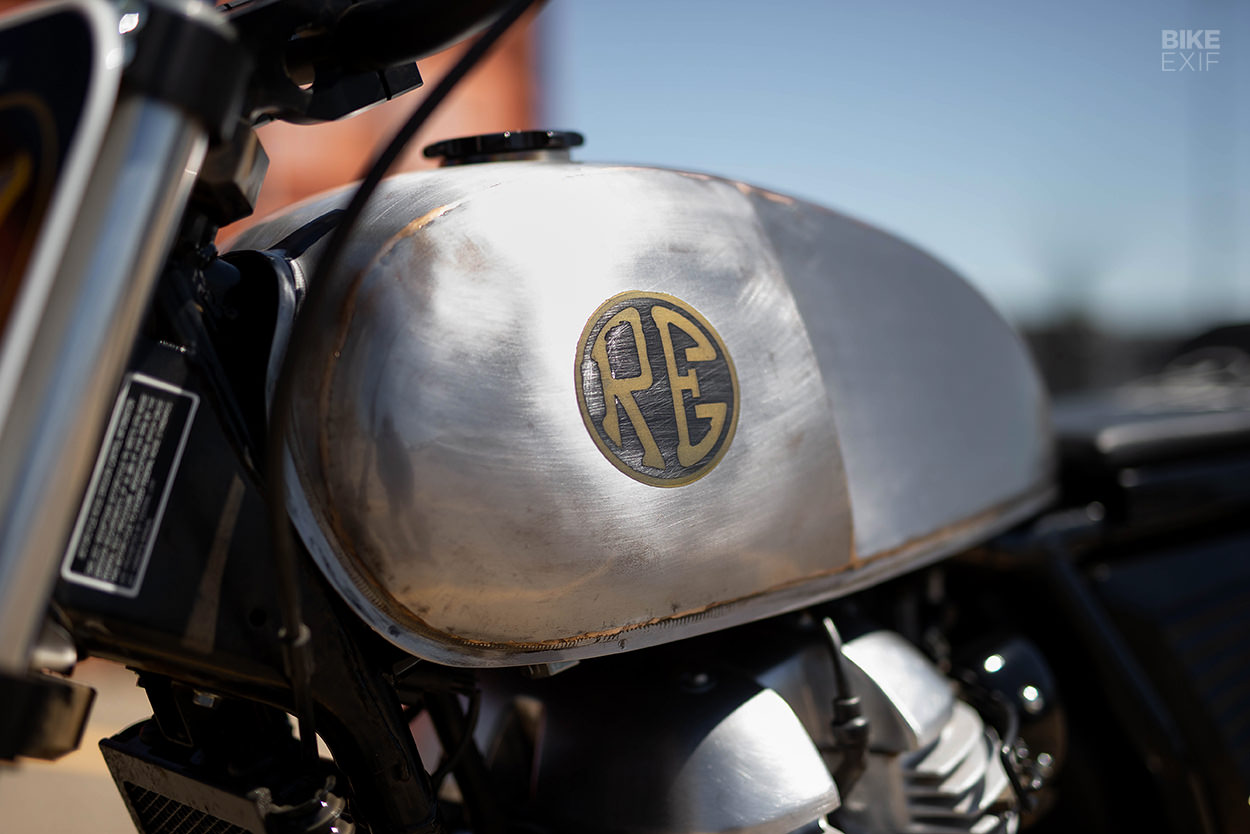 One standout piece is the bike’s fuel tank. It’s the OEM unit, trimmed at the bottom and narrowed at the knees by Jeff Johnson of Ill Eagle Designs. Nean loved the look of the welds and wanted to save a buck, so she scuffed up the metal with a Scotch Brite pad and sprayed over it with a $27 can of clear coat.

Nean’s commitment to every last detail is nuts. Her bike has custom sparkle footpeg rubbers, 3D-printed side covers done by colleague, Brian Holvenstot, and stenciled logos on the tank and number boards by another Icon staffer, John Whitaker. 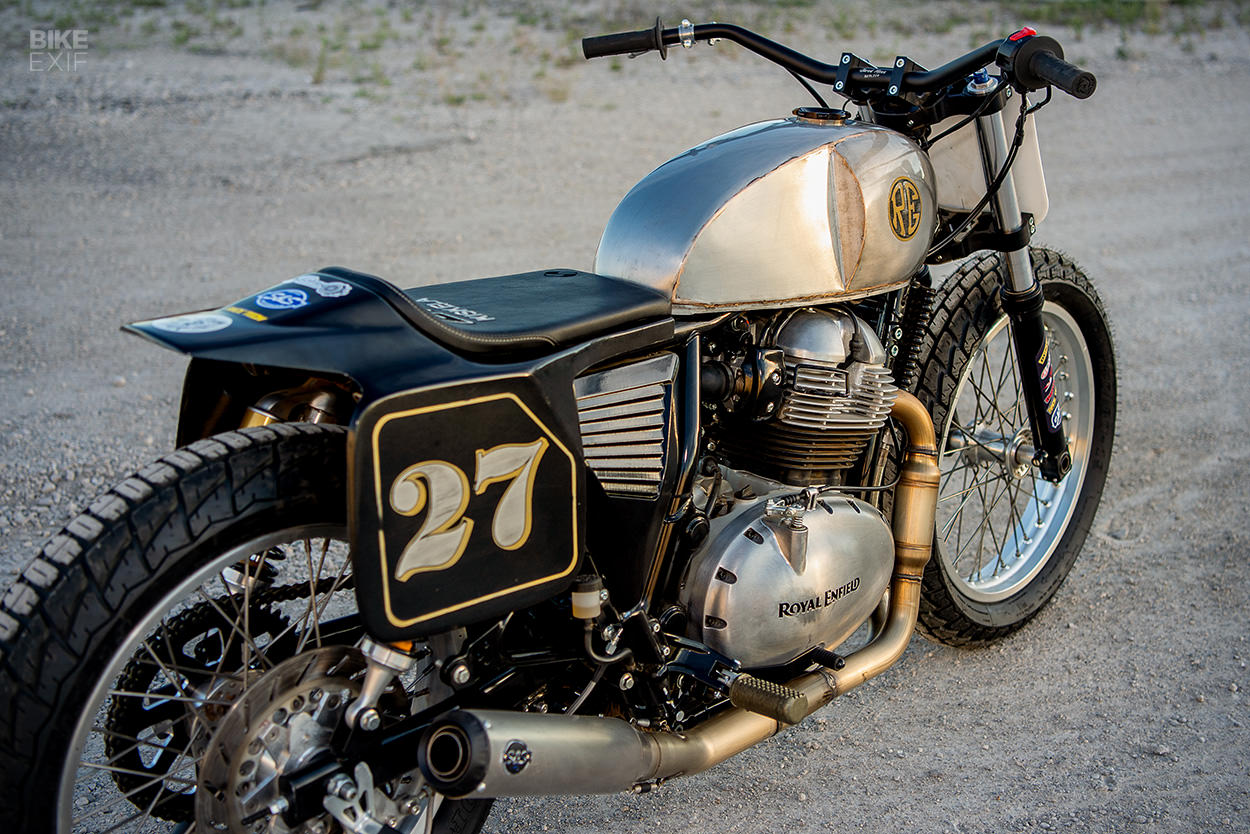 Hardly a part hasn’t been touched by Nean’s Scotch Brite pad, and she even painted, then scuffed, the S&S logo on the exhaust, to make it look vintage. 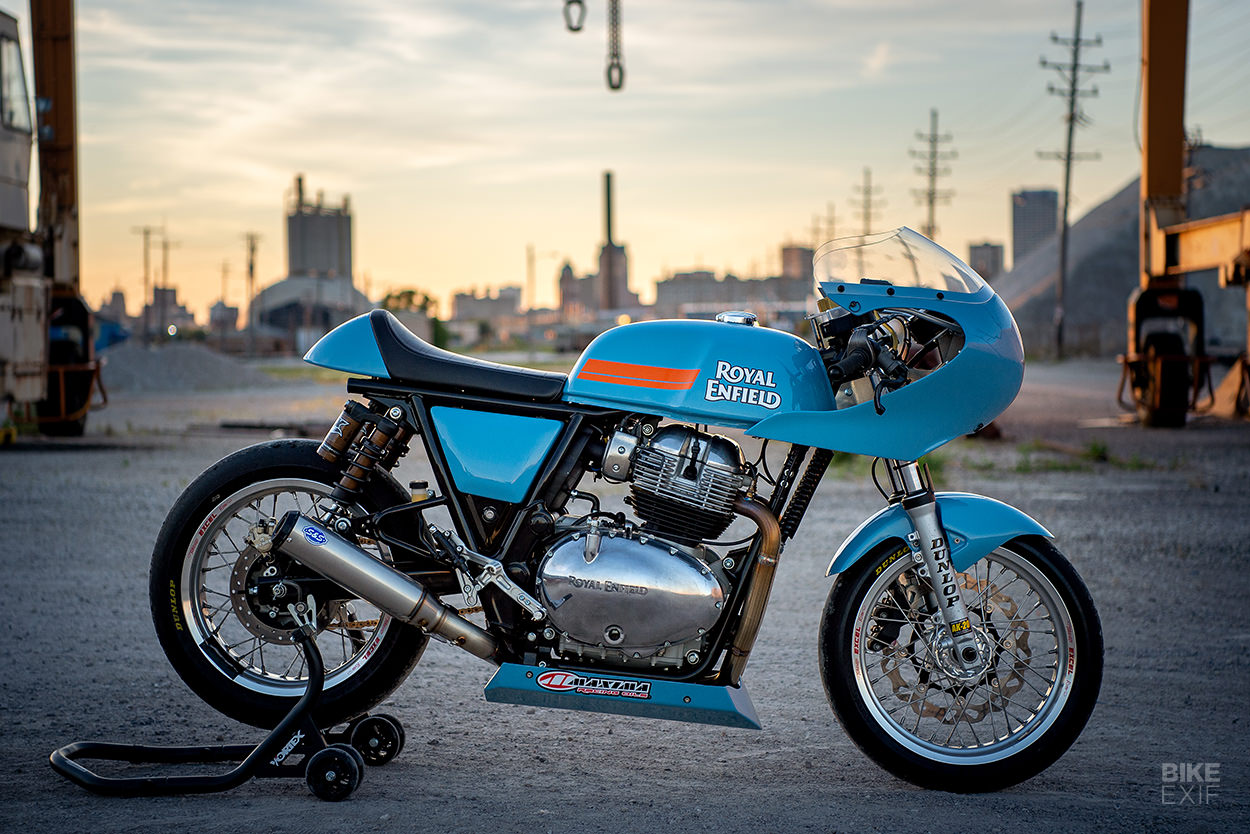 Trisha Dahl’s road racer A low voltage technician by trade, Trisha Dahl only started riding motorcycles at 23—despite a life-long obsession with two wheels. She’s got experience racing flat track, but road racing is a fairly new challenge for her. She’s still knocked her Continental GT build out the park.

All the road racers in the BTR roster use the same fiberglass fairing, matched to a Woodcraft front fender and the stock Continental GT tail section. They also share the same clip-ons and rear-sets, and a two-into-one S&S Cycle exhaust system. But other than having to leave the motor alone, the rest is fair game. 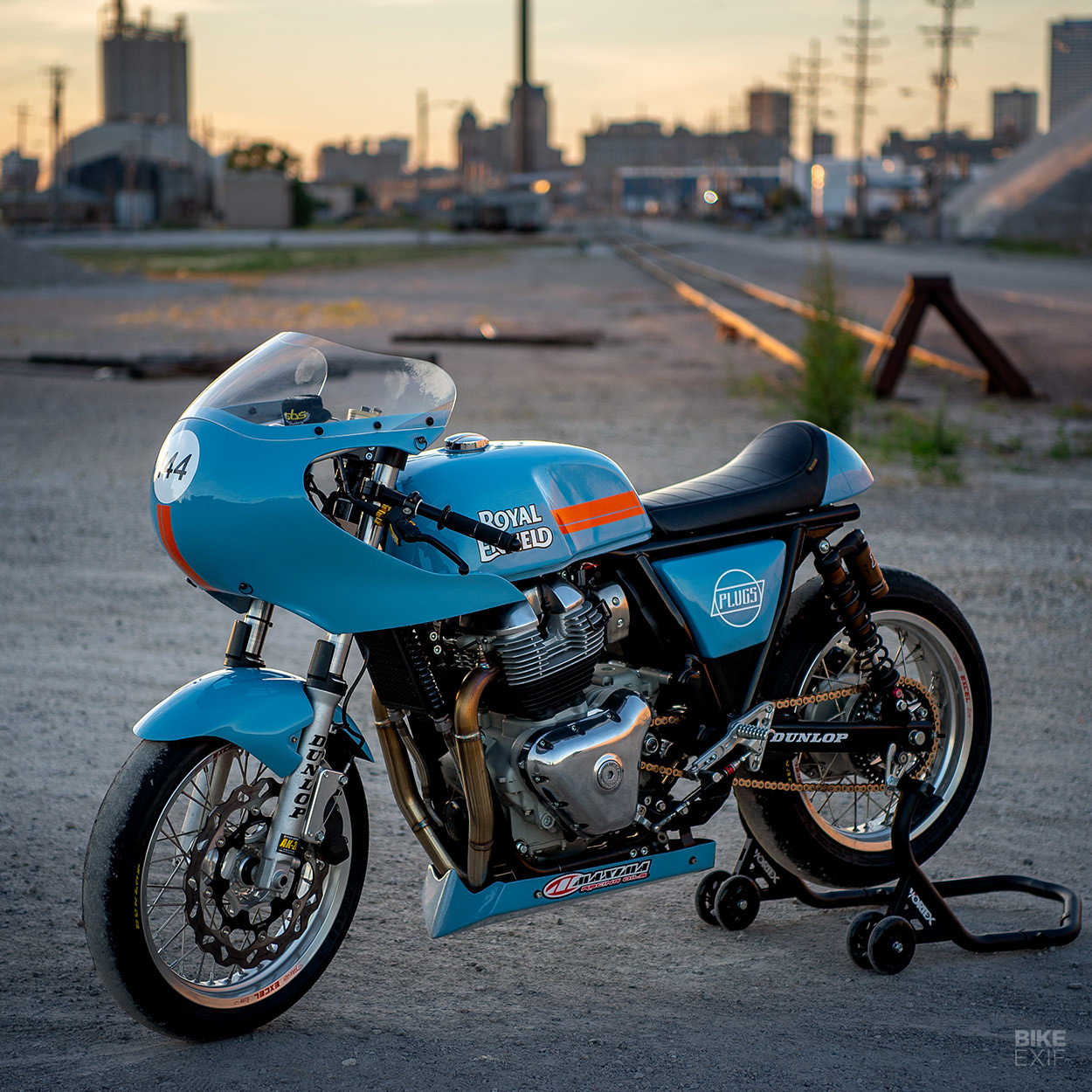 Trisha’s Royal Enfield gets a boost from an S&S high-flow air filter, with a Dynojet Power Commander V, quick-shifter and MotionPro Rev2 throttle all in play. It also has a MotionPro run/stop switch, a ProTaper clutch perch, and an Antigravity Lithium-ion battery to shave weight.

The front forks are running Traxxion Dynamics cartridges, and are matched to S&S triples with offset adjustment. There’s a set of full-adjustable Fox shocks out back too. The wheels are a mixed bag of 17” Excel rims, a front hub from an off-road bike, the OEM rear hub and custom spacers, and are wrapped up in Dunlop race slicks. 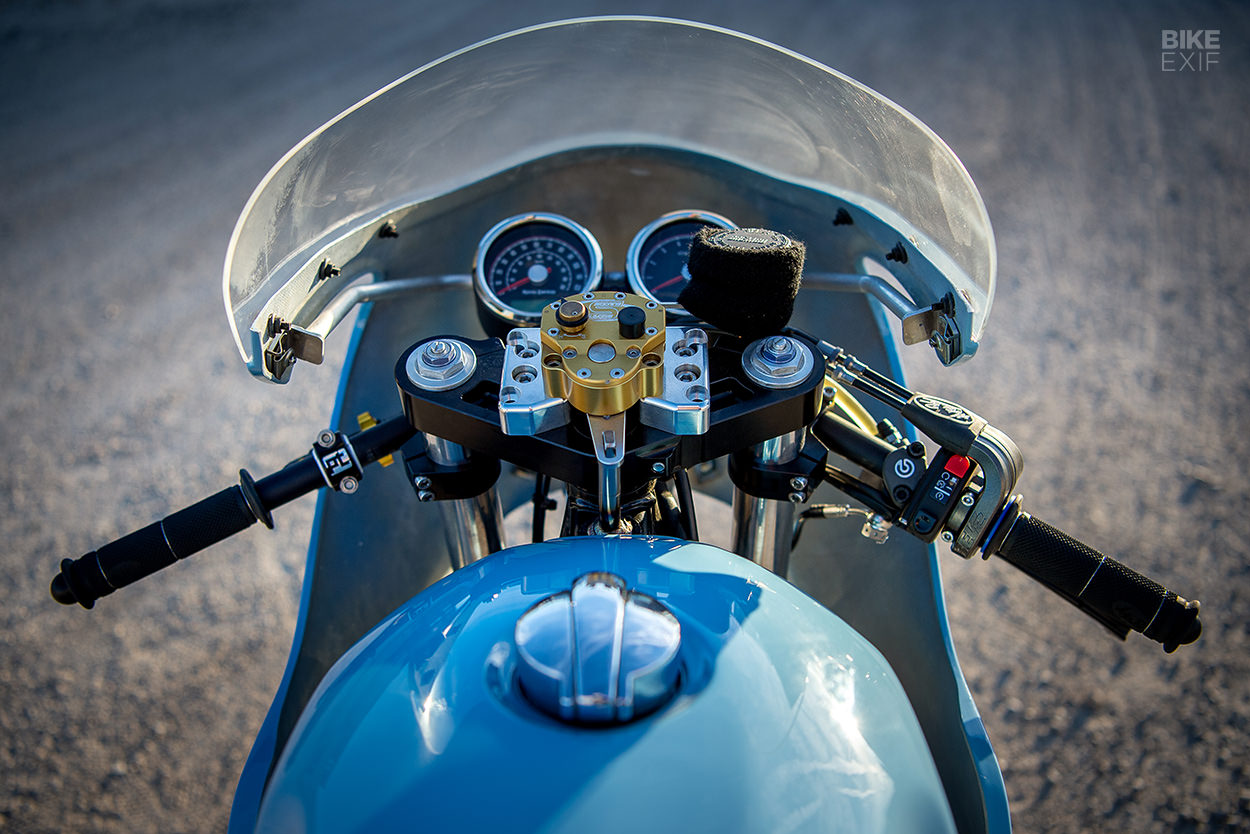 For the front brake, Trisha used a Brembo master cylinder and fluid reservoir, hooked up to custom Spiegler lines, a four-piston caliper and a 320 mm Galfer rotor. The setup uses a machined caliper bracket that didn’t work out of the box—so Trisha’s friend Jason Osmonson had to beat it into shape.

Plugs Garage in Minnesota handled the paint. It’s a tribute to the Porsche 917 Gulf Oil racecar, but it’s executed far more tastefully than some of the gaudy knock-offs out there. 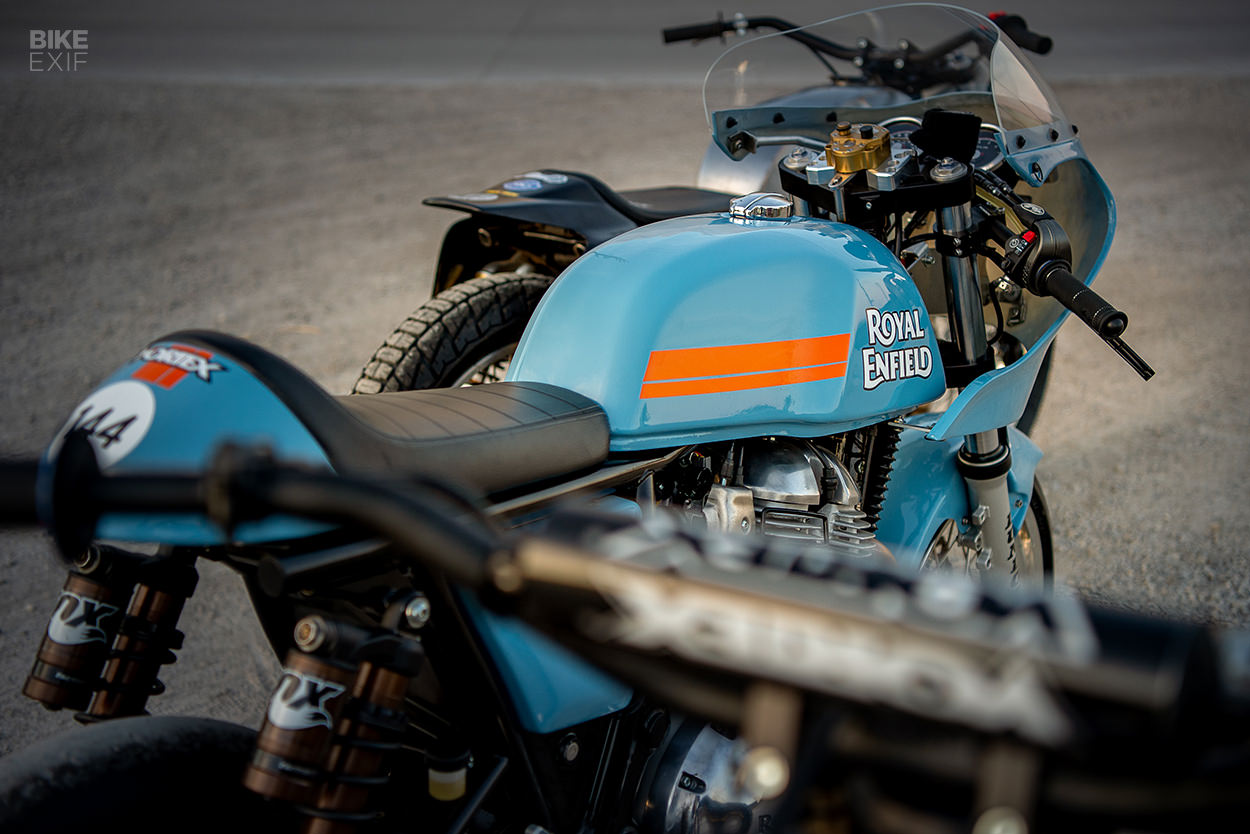 Kudos to Royal Enfield for introducing road racing to the program this year—if half the bikes look as good as this one, it should make for some downright good-looking racing. 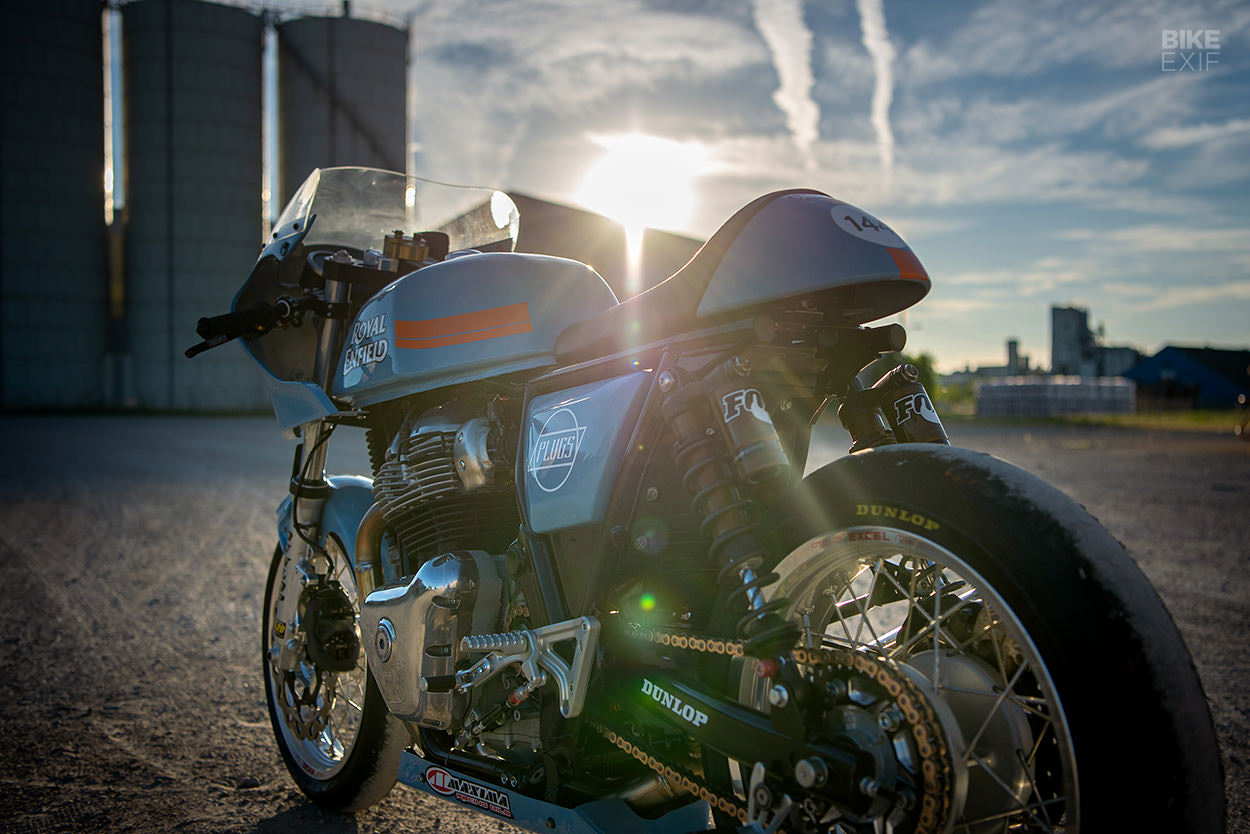 The BTR flat track season has already kicked off, and the road racing’s set to start next month. In the meantime, you can head over to the Build. Train. Race. website to see the full roster of racers and builds, and vote for your favorites. 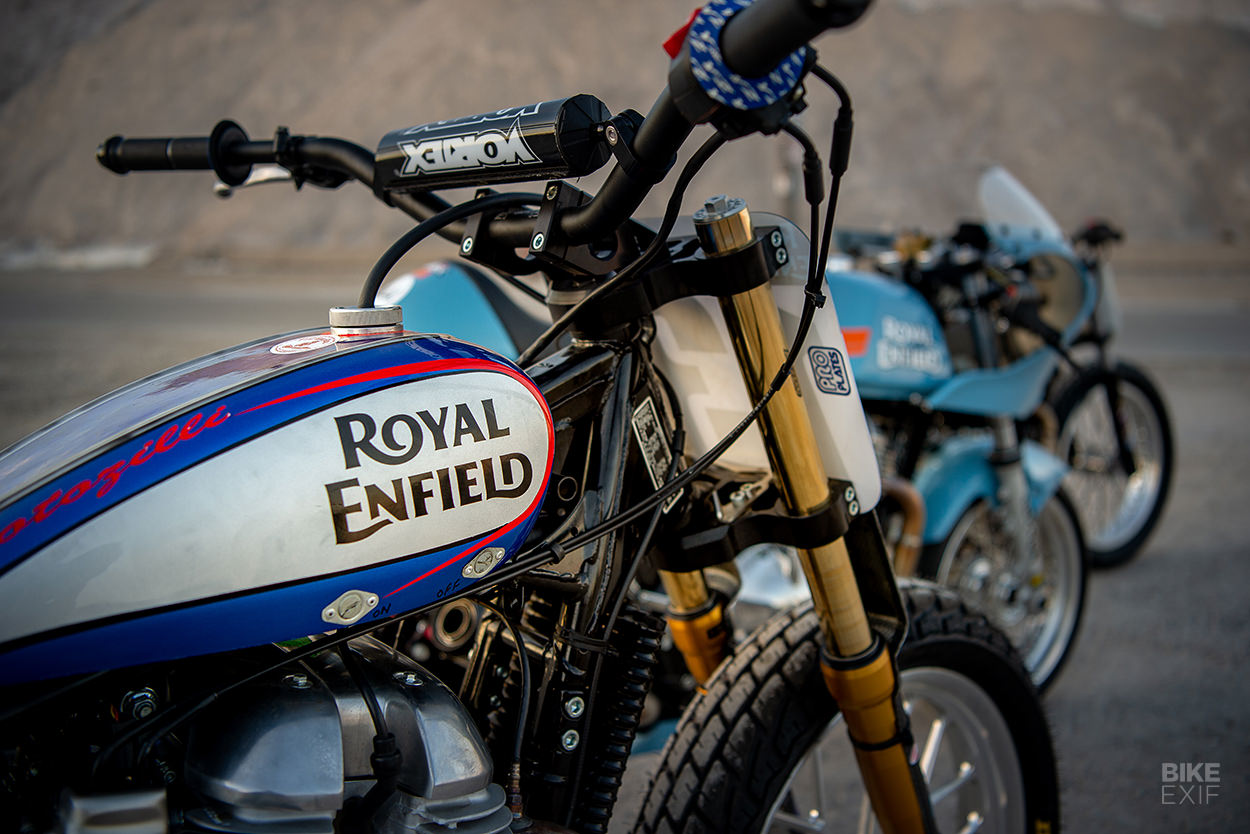