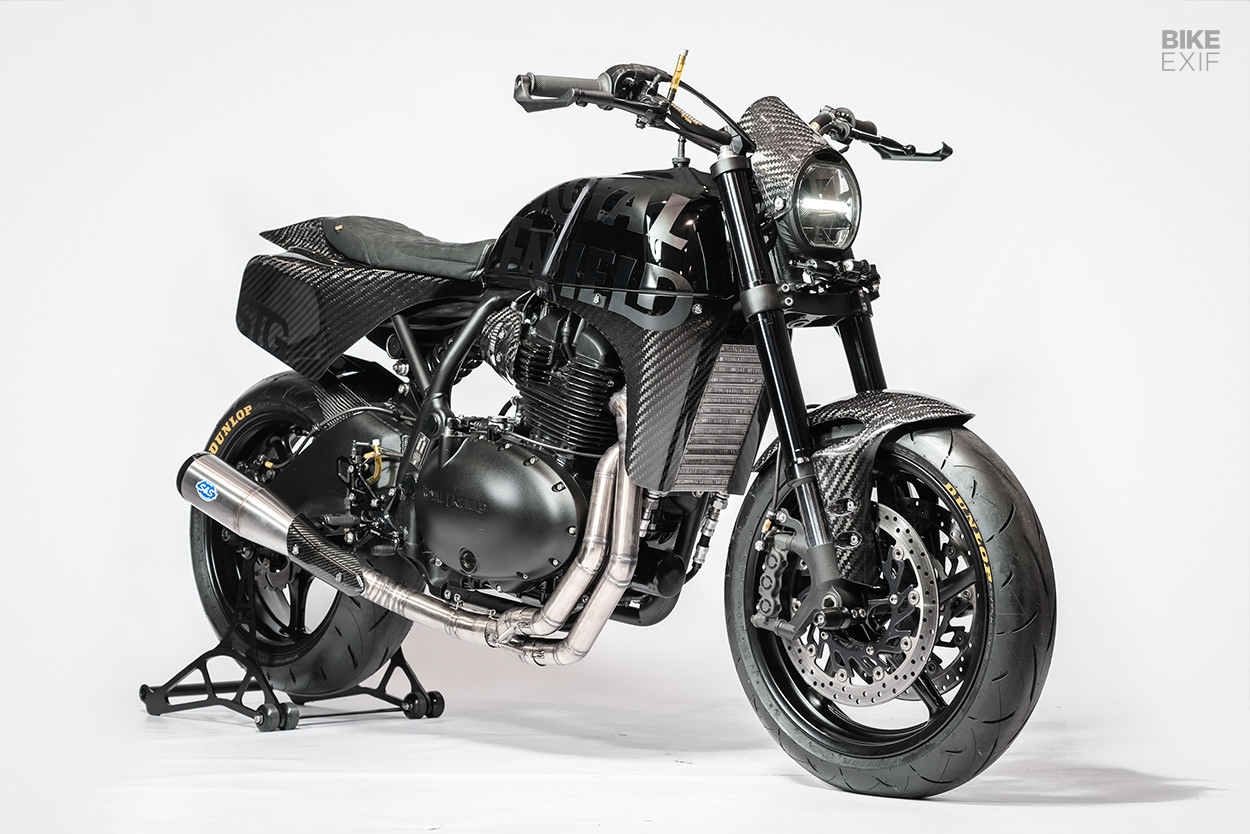 Motorcycles no longer race at the International Pikes Peak Hill Climb, and more’s the pity. The unique race inspires gutsy engineering, and you used to see the gnarliest of machines in the pits of the independent teams. It’s those bikes that inspired this aggressive Royal Enfield 650 street tracker from STG Tracker in Argentina.

Nicknamed ‘Crow’, the build was an official commission from Royal Enfield Argentina, who supplied a brand new Continental GT 650. STG then took it, bumped the motor to 865 cc and trimmed over 80 lbs of fat. 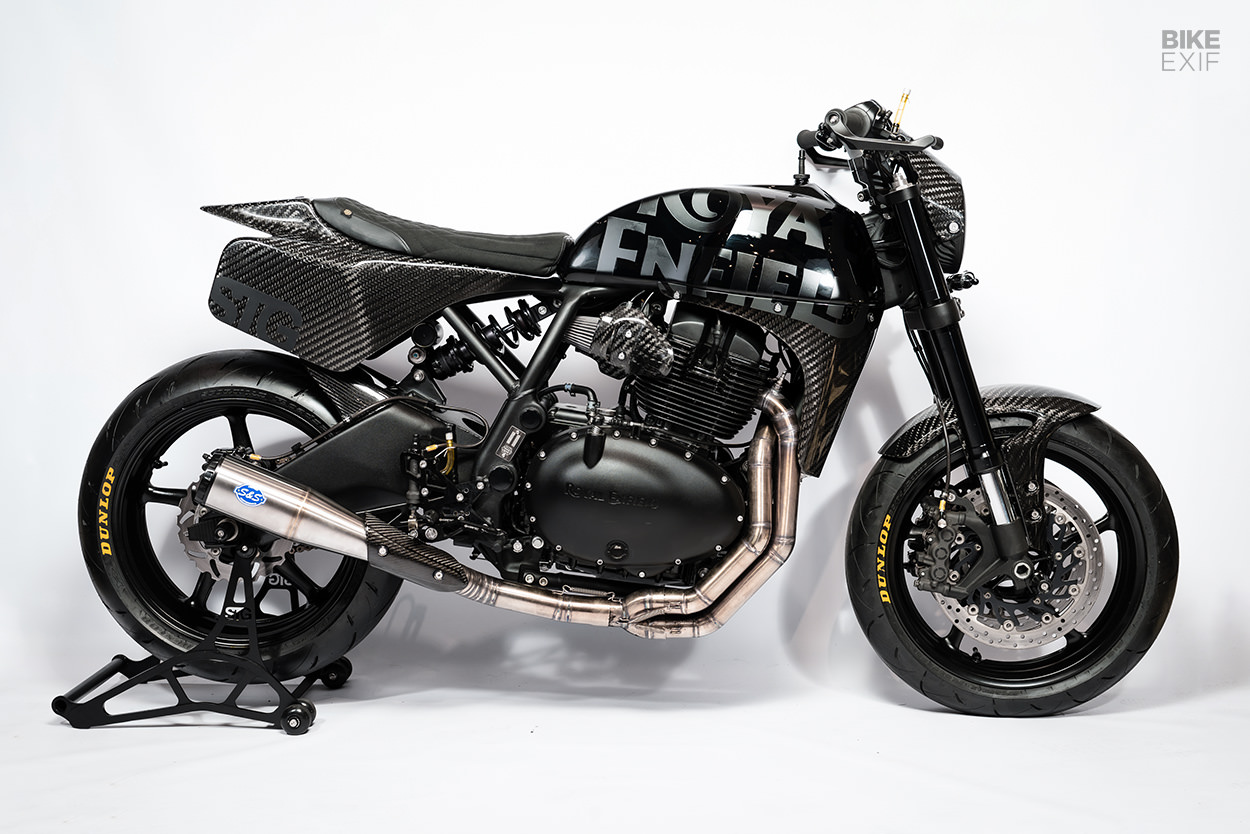 STG’s workshop is based in Buenos Aires, and run by Marcelo Obarrio and Germán Karp. The crew have built bikes for Royal Enfield Argentina in the past, but wanted to up the ante on this project.

“Most of our customizations are trackers, brats and scramblers,” says Marcelo. “We wanted to make something different, and chase the best power to weight ratio.” 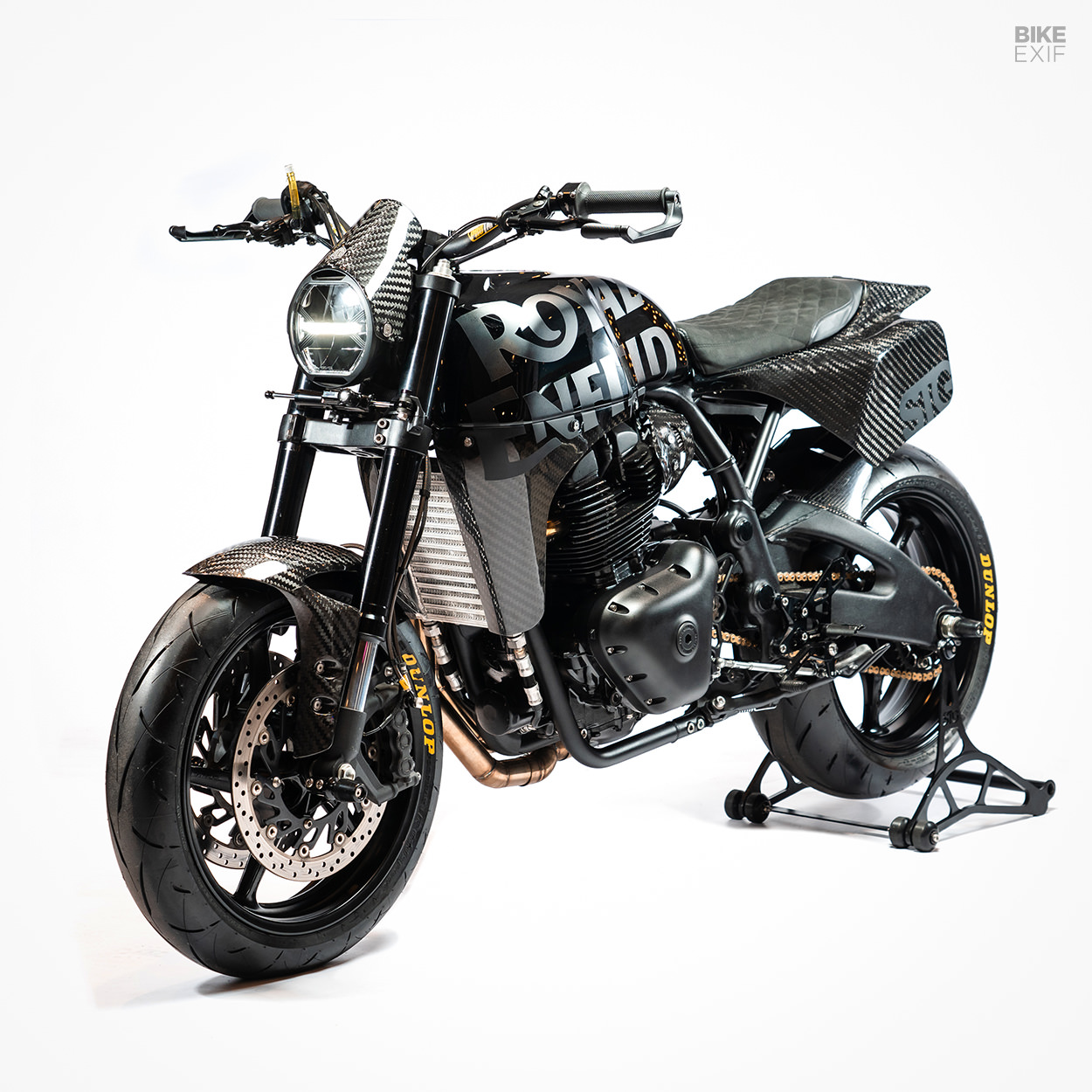 “We were inspired by Pikes Peak race bikes, with that flat track seat that we really like. All aspects of the bike were redeveloped with the goal of performance. Not just to look good, but also to behave well on track.”

“We are not experienced track riders, but we have fun chasing the apex. And this bike is street legal too!” 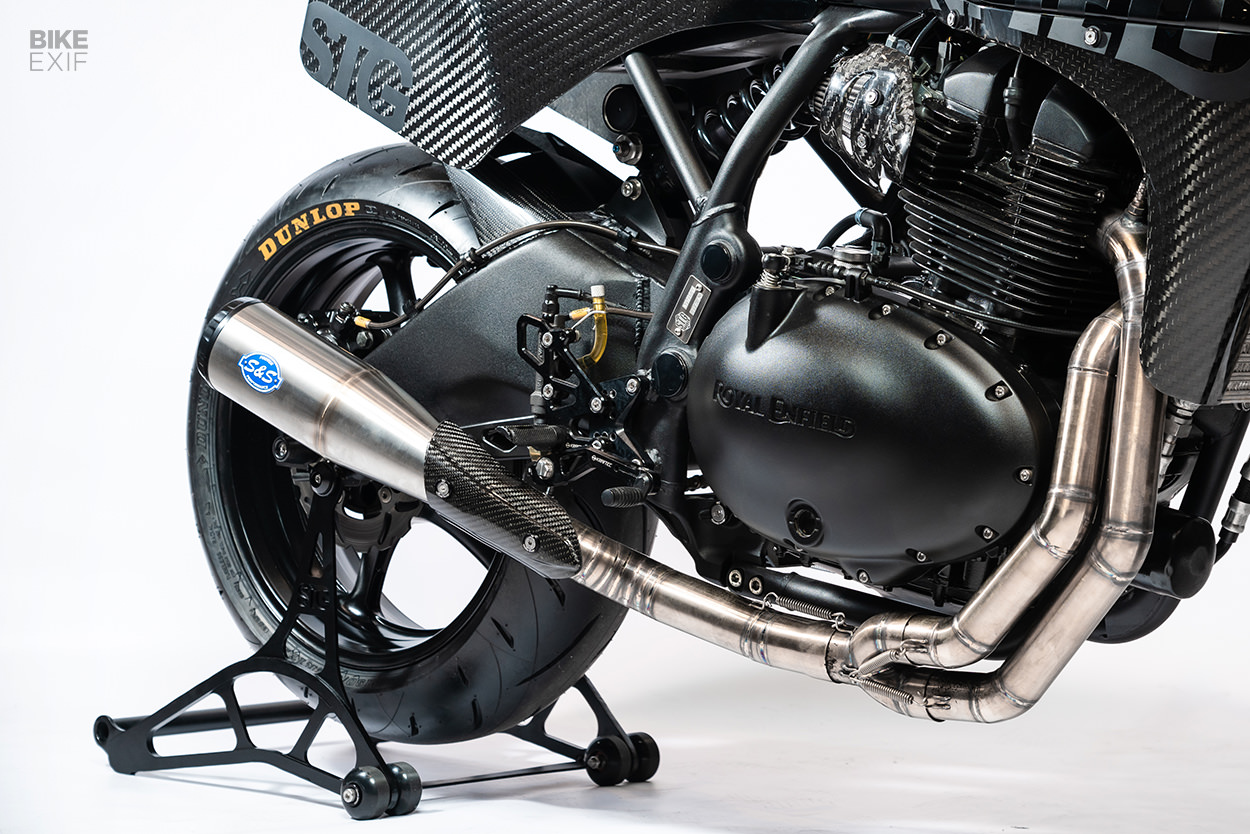 The Crow’s first run on the dyno produced 74 hp and 80 Nm of torque—a significant jump over the stock bike’s 47 hp and 51.5 Nm. To get there, STG used an 865 cc big bore kit from S&S Cycle, along with ported heads and an S&S camshaft. The upgrades also include new Rekluse clutch plates, a Gorilla quick-shifter, a larger aluminum oil cooler and K&N pod filters.

The exhaust system is a combination of headers fabricated in-house, with an S&S muffler designed for the Indian FTR. There’s a carbon fiber heat shield to keep the rider’s boot safe. 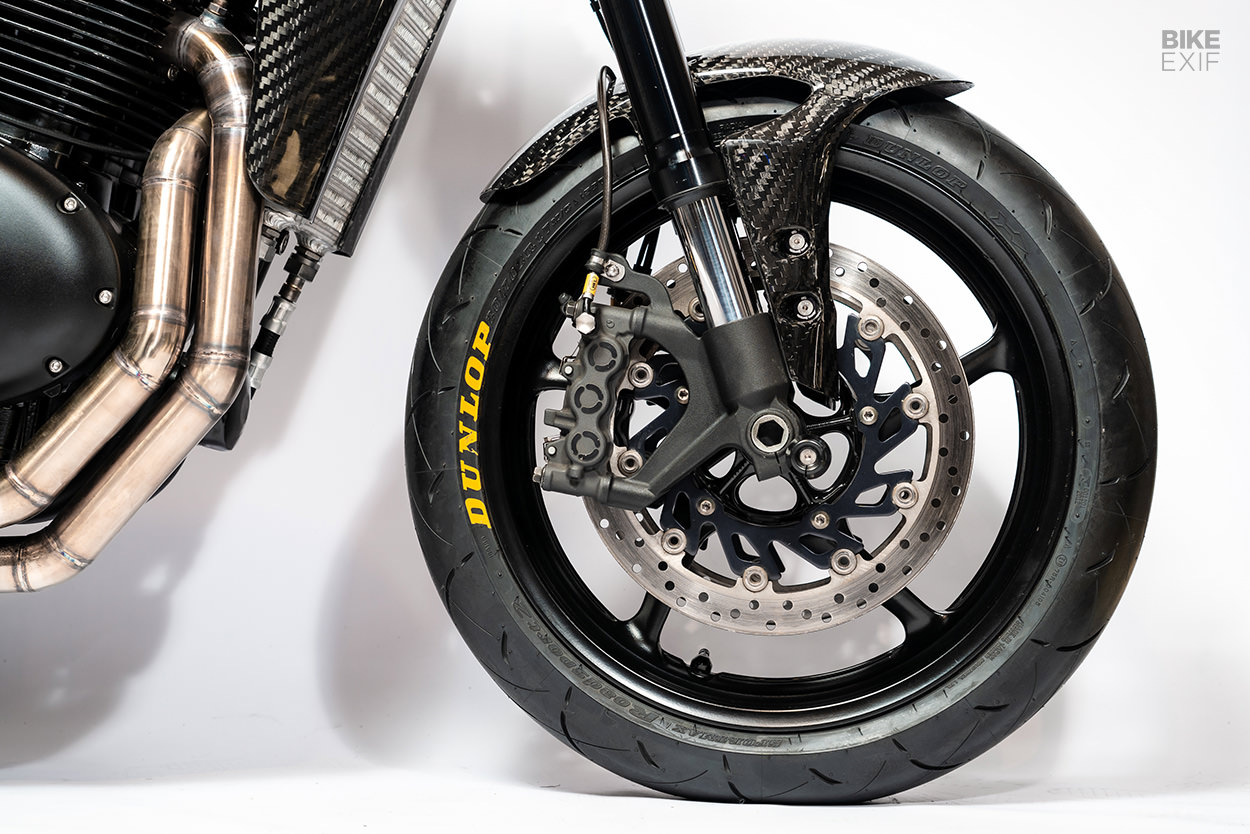 STG also upgraded the Royal Enfield’s running gear to match its new output. Up front are the forks, brakes and front wheel from a Yamaha R1. A CNC-machined top yoke holds everything in place.

The swingarm, rear wheel and shock are all from a Yamaha R6. STG fabricated a new subframe and upper shock mount, and shortened the new swingarm to match the Enfield’s measurements. Both wheels are wrapped in Dunlop Roadsport 2 rubber. 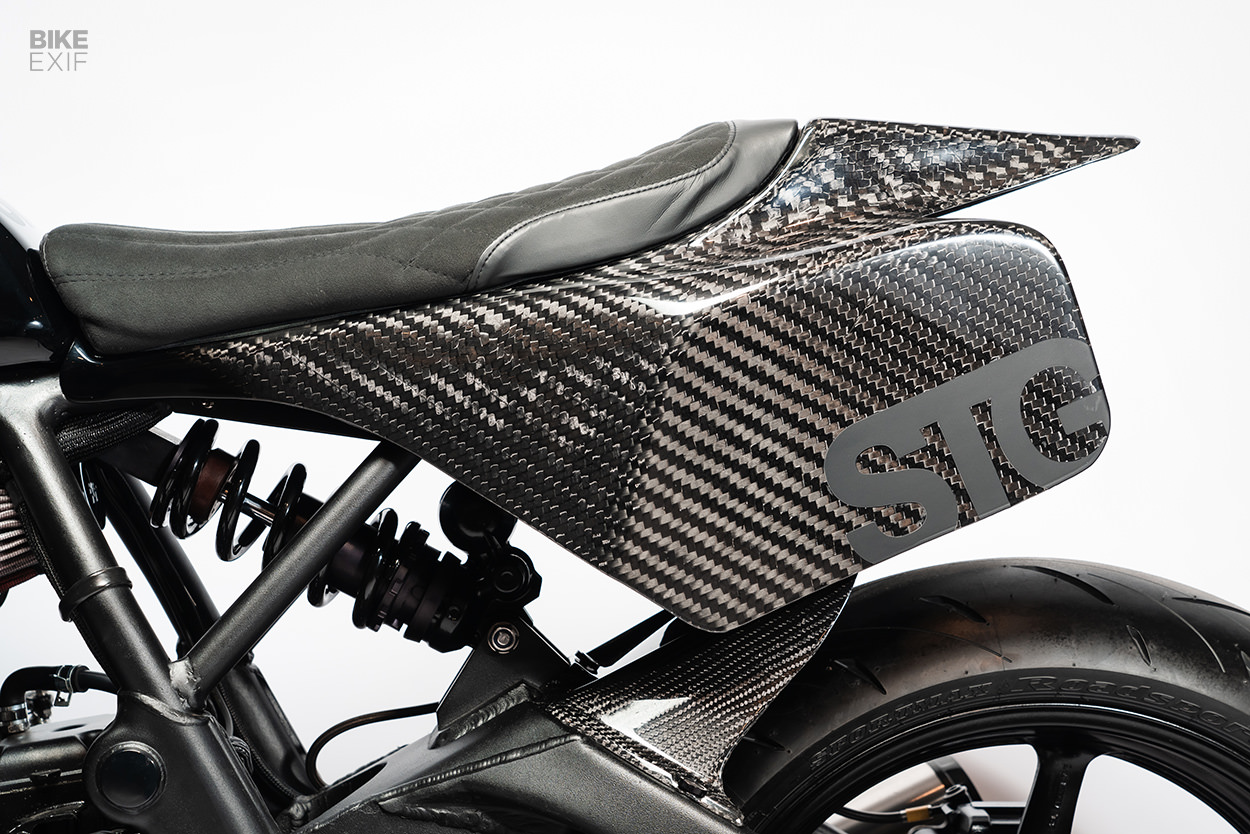 There’s a long list of carbon fiber parts on this build, and they’re all custom. The flat track seat stands out the most, but there’s also a new headlight nacelle, front fender, rear hugger, and a set of intake covers. A pair of fairings flank the fuel tank to help sharpen up the bike’s lines.

STG designed molds for the parts themselves, then sent them to a specialist that makes carbon fiber stuff for professional rally bikes. The OEM fuel tank remained, but was modified with the top section of a Honda VF750 tank, and a quick-release gas cap. 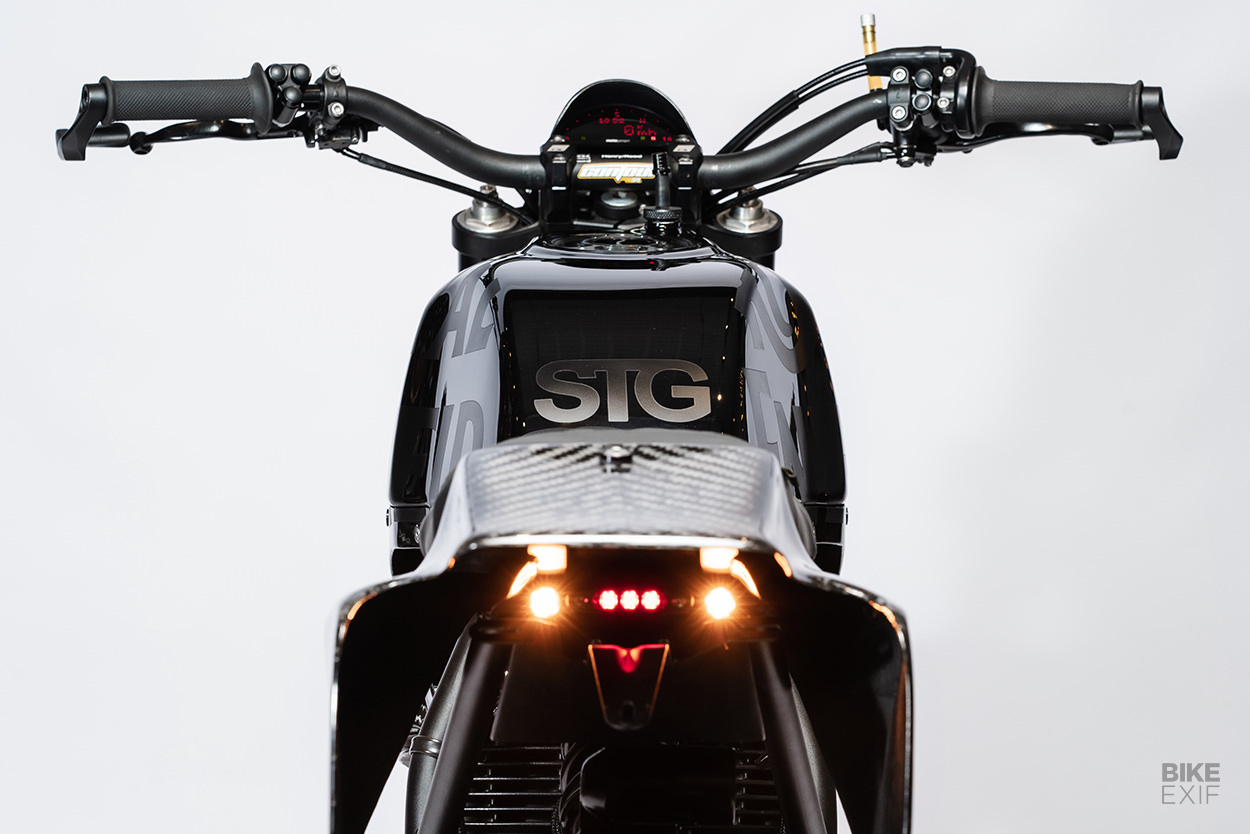 In front you’ll spot new ProTaper handlebars, kitted with Pro Grip grips, Motone push buttons and lever protectors. The headlight’s a Koso Thunderbolt LED unit, and the speedo’s a digital Motogadget Motoscope Pro. There are tiny LED turn signals at both ends, with an LED tail light and a license plate bracket poking out under the tail piece.

STG also installed Kraftec rear-sets, a CNC-machined rear sprocket, and a full set of Hel brake lines. Thoughtful details abound—like the laser-etched ‘STG’ and ‘Royal Enfield’ logos on the fasteners that are sprinkled across the bodywork. 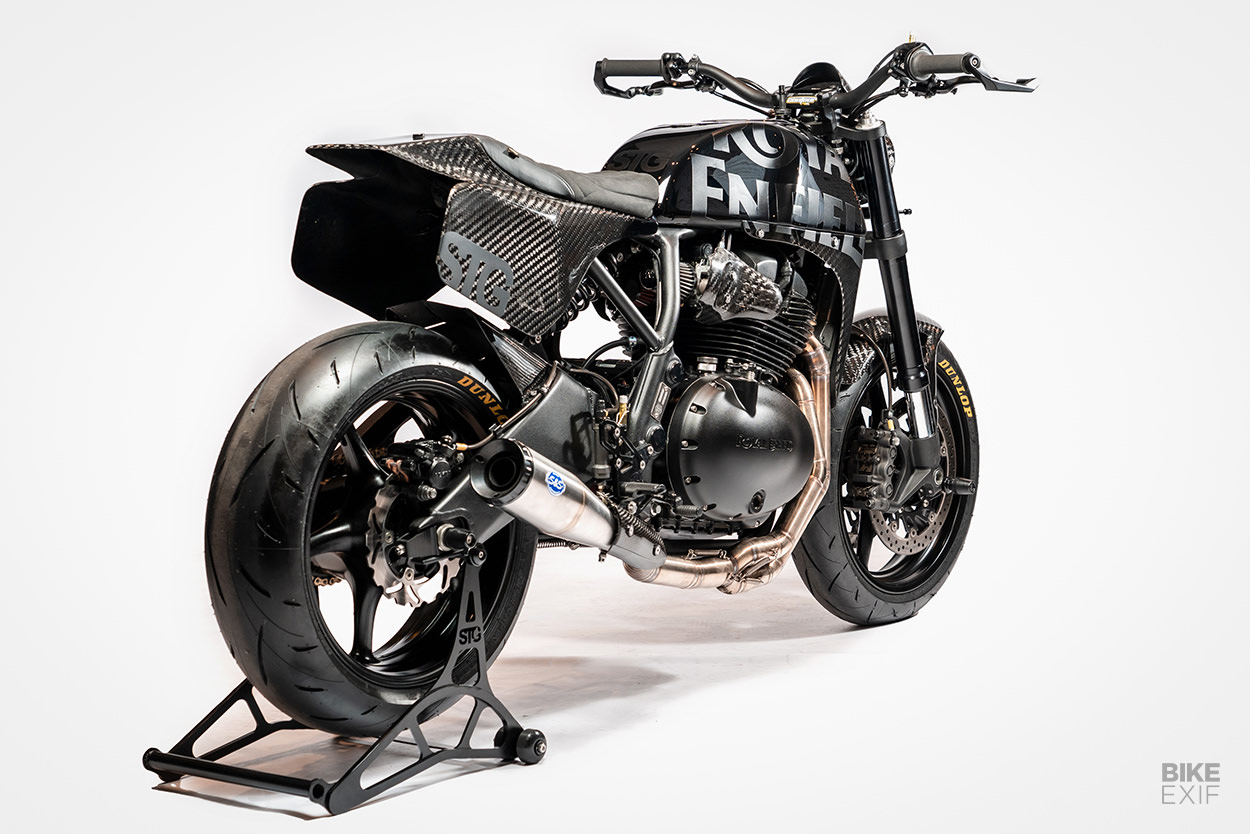 With a mix of raw carbon finishes, black paint and ghosted logos, STG’s Crow lives up to its name. But it’s good to know that the menacing livery and hunched stance aren’t just for show. This one really goes too, thanks to its bored-out motor and a new dry weight of just 172 kilos [379 lbs].

“Yes, it is a blast to ride,” Marcelo confirms. 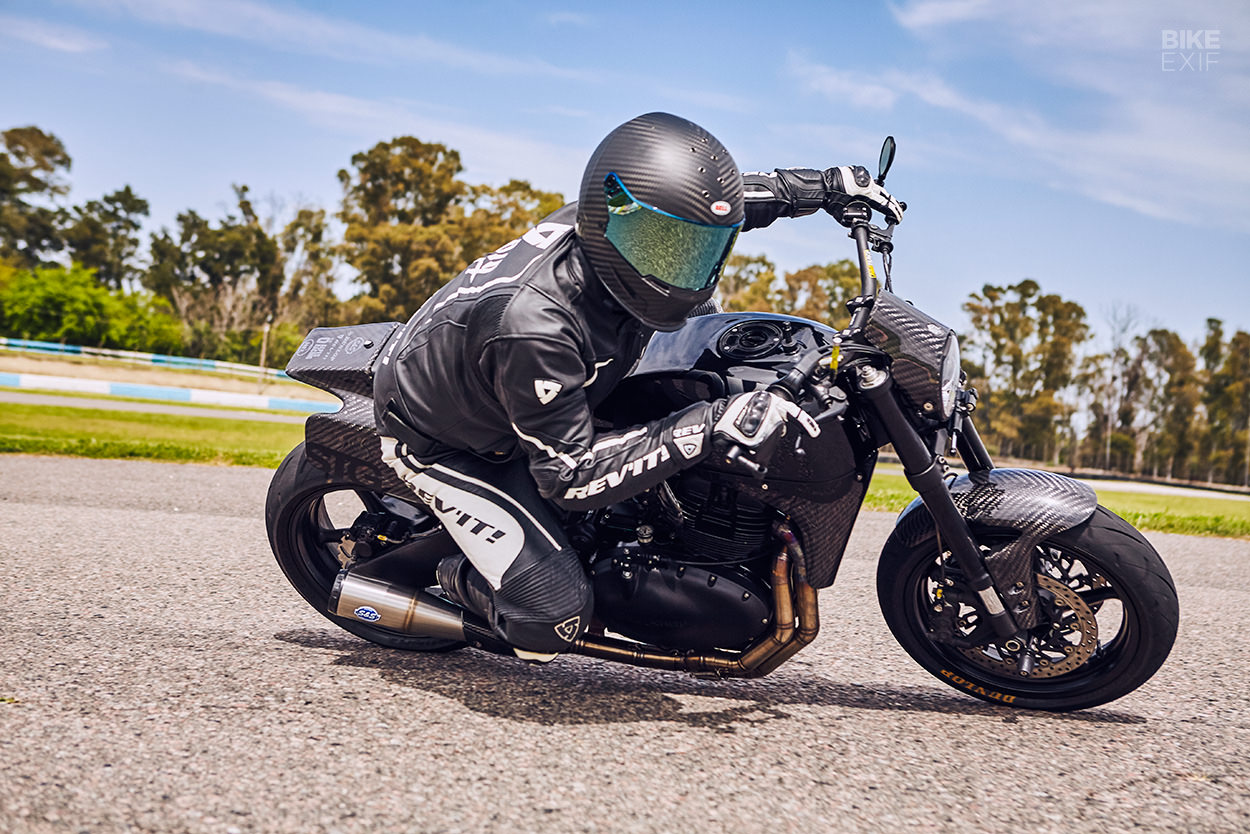