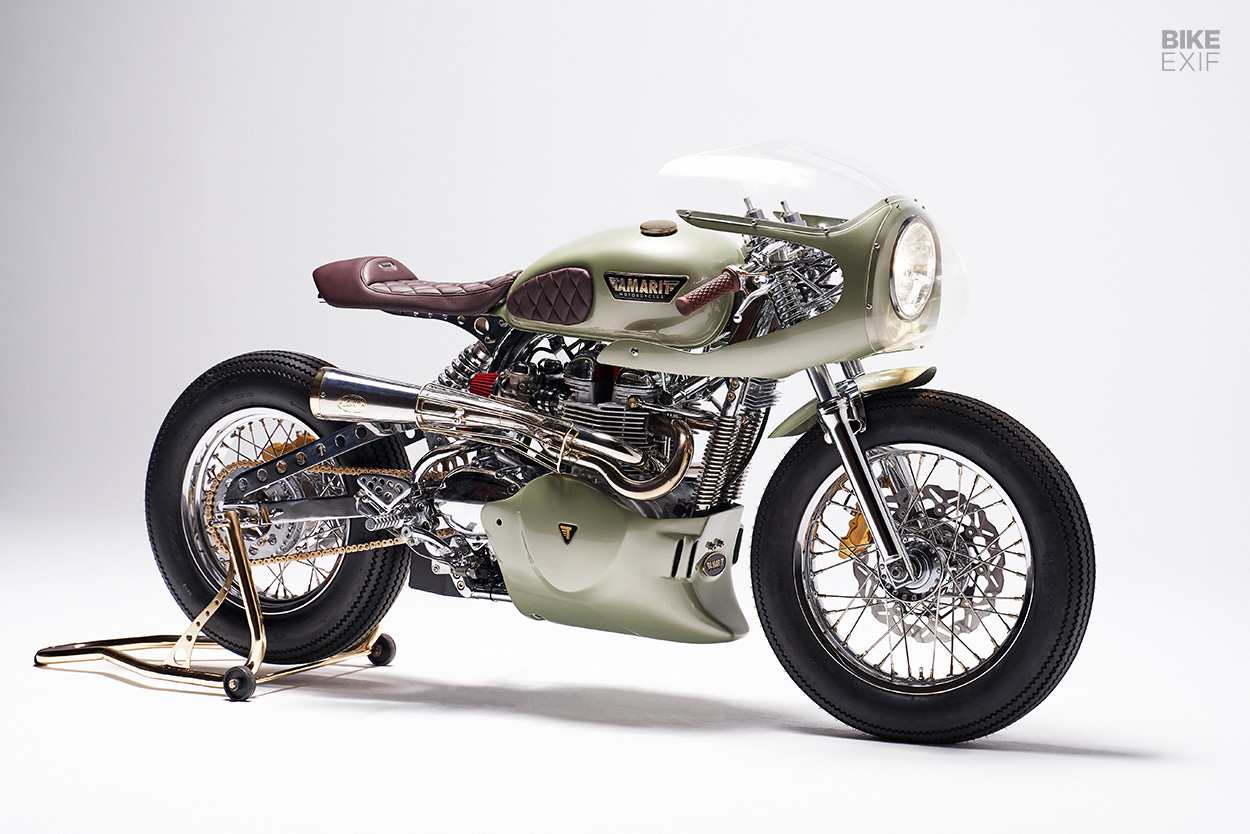 Turning motorcycle customization into a sustainable business is tough, but it’s not impossible. Spain’s Tamarit Motorcycles is proof—they’ve racked up an impressive portfolio of Triumph builds in myriad styles, along with a hearty catalog of bolt-on parts. And they’ve just built their 100th custom.

We’ve kept a constant eye on the Alicante workshop over the years, and this Triumph Thruxton café racer is one of their most extensive transformations yet. Dubbed ‘Jade,’ it boasts a handful of the shop’s parts, a number of intriguing one-off details, and whole lot of style. 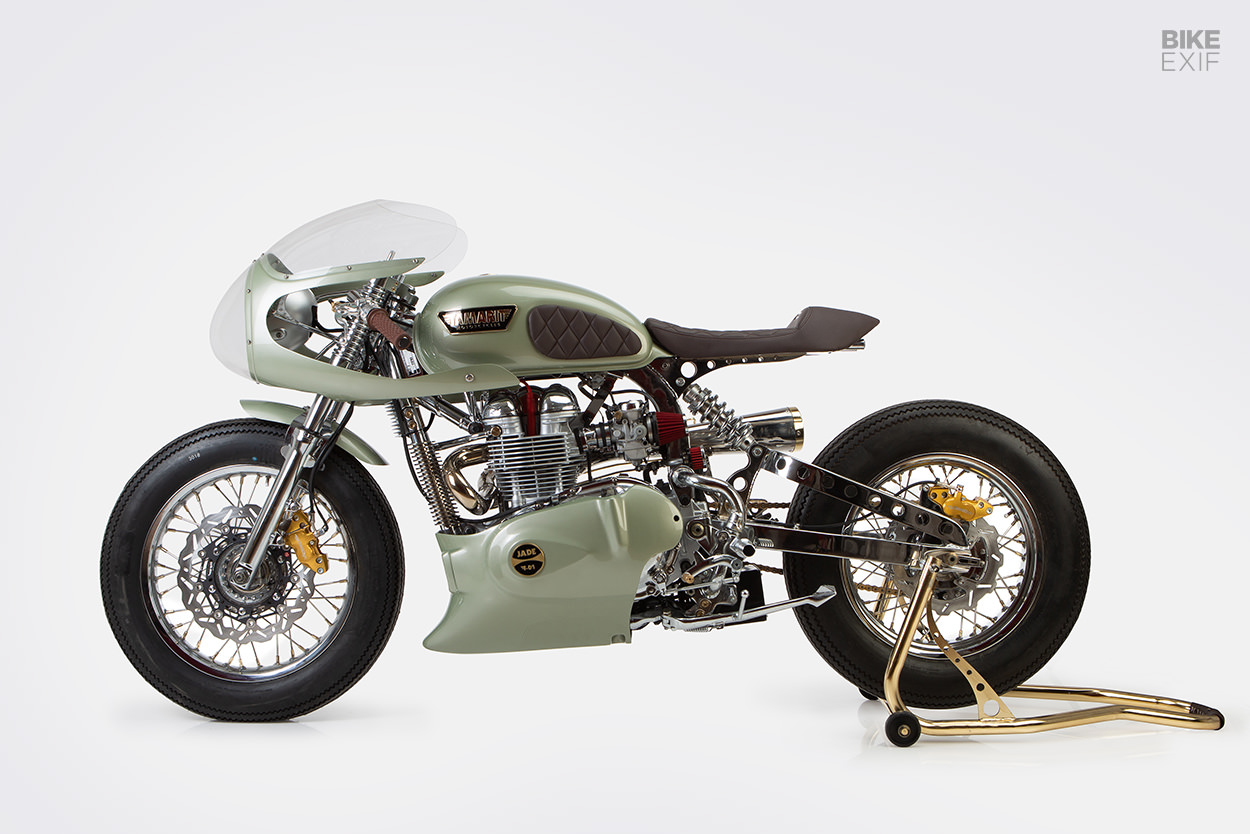 Opting to build their 100th bike to their own preferences instead of waiting for a client to commission it, Tamarit kicked things off with a pre-2008 carbureted Triumph Thruxton 900. The crew dropped the motor out, and refreshed it with upgrades to the valves and crankshaft. They also swapped the oil cooler for a system that’s integrated into the front part of the frame.

The Thruxton inhales through a pair of pod filters, and breathes out via a two-into-one exhaust from Zard. It’s dressed with an elegant custom heat shield, and capped off with a mesh cover at the end. 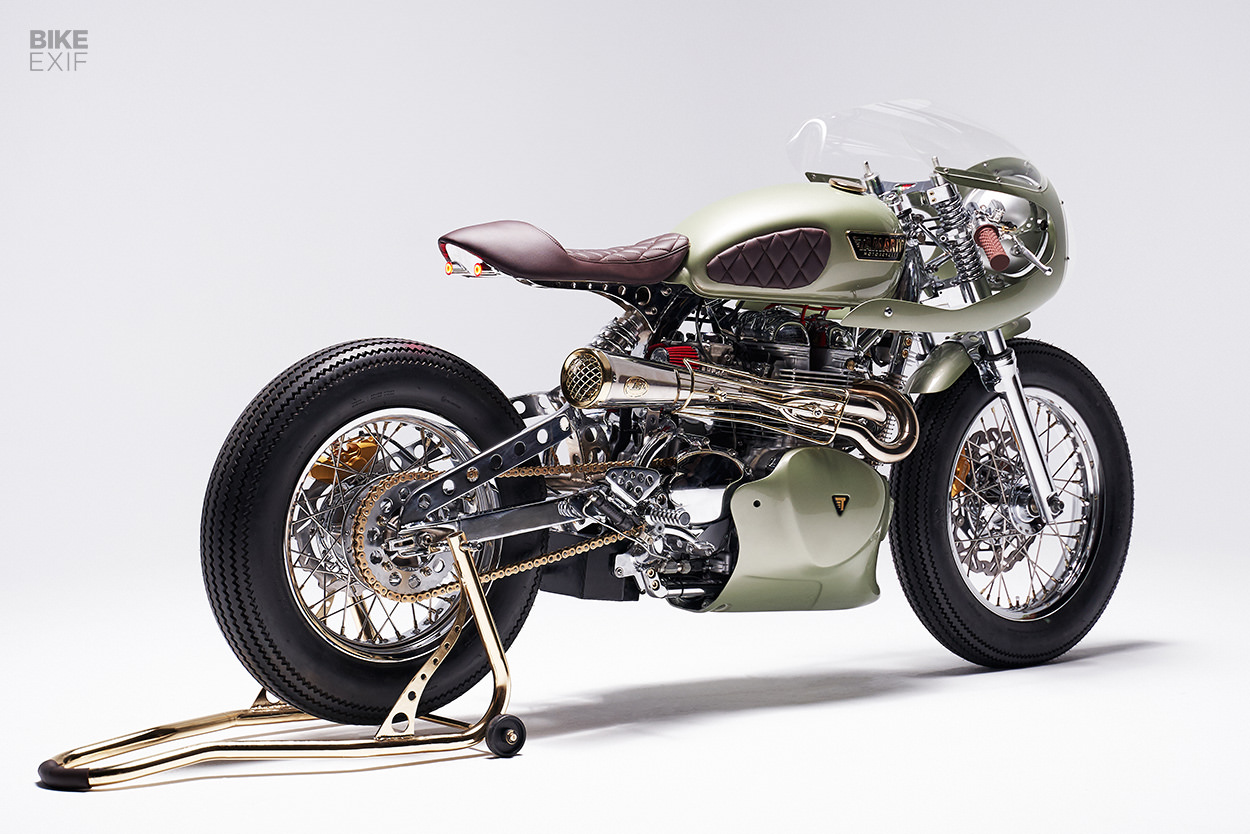 A ton of engineering went into the back half of the Triumph. Tamarit extended the swingarm, then shaved off the twin shock mounts and fabricated a braced mono-shock system. A Hagon unit connects it to a new upper shock mount.

The upper mount sits between two subframe plates that are welded to the frame to hold the seat pan. It’s a neat design that repeats the drilled motif on the subframe brace. A Beringer brake set rounds out the chassis upgrades. 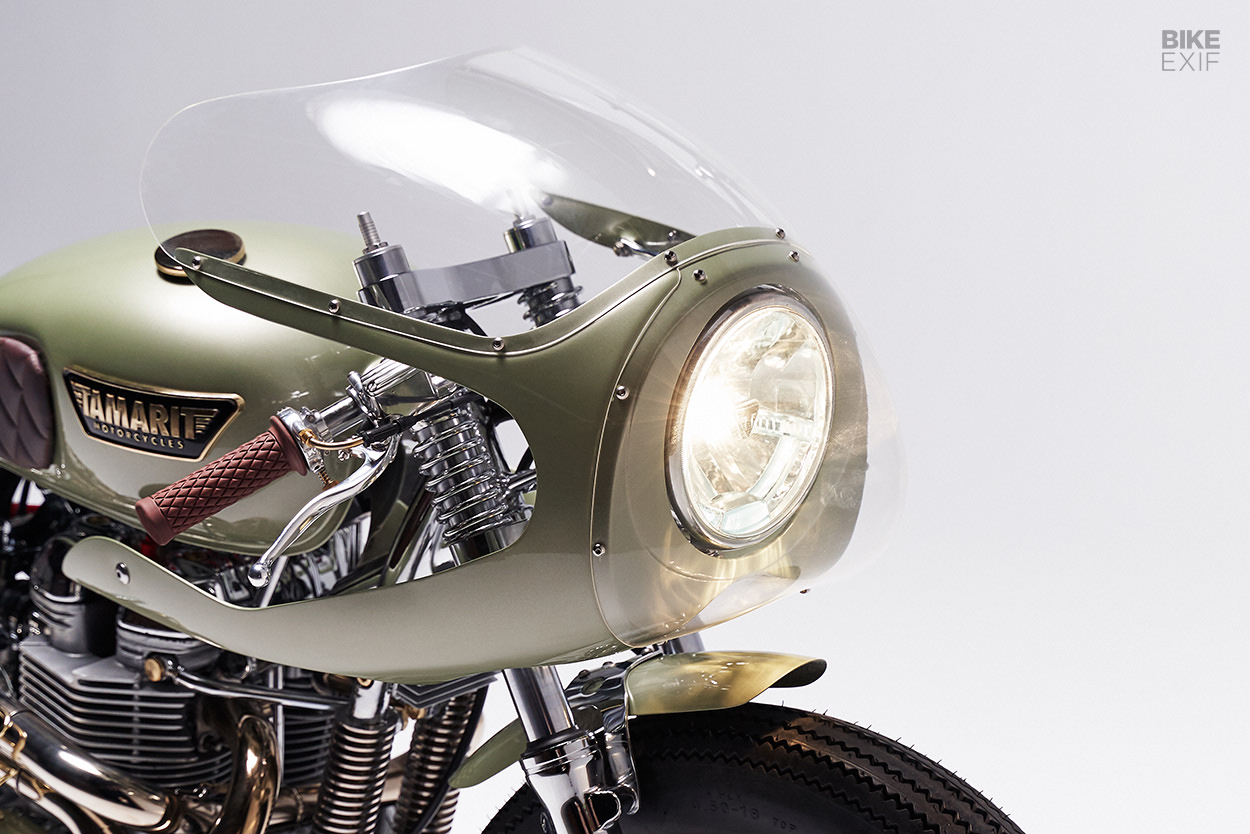 Tamarit have more than a few dress-up parts in their catalog, but the bodywork on this Thruxton was all made from scratch—save for its OEM fuel tank. To create the new fairing and belly pan, the team first sculpted them from clay. They then made a pre-mold, then a final mold, before shaping the parts out of fiberglass.

The fairing even features a custom windshield and ‘bubble,’ and hosts the headlight from a newer Thruxton R. A bespoke bracket system holds everything in place. 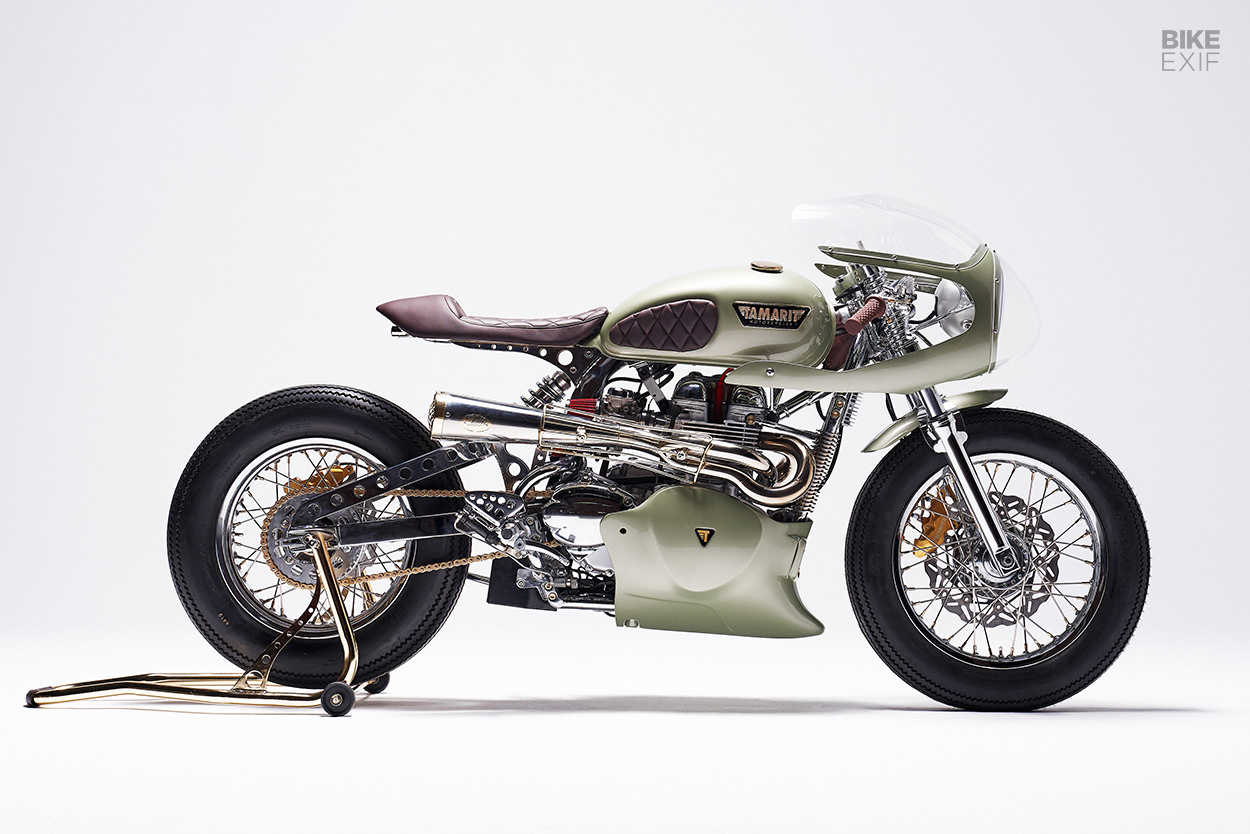 The belly pan is an asymmetrical affair, with a bulge on each side that wraps tight around the motor, echoing its shape. A triangular Tamarit logo on the right hand side mimics the OEM Triumph branding; a clever touch. It’s a slick design, and something that Tamarit might be willing to offer to clients as a special order item.

Out front is a small fiberglass fender, held by an aluminum brace. Up top you’ll find a custom leather seat, with a pair of leather tank knee pads that show off the same stitching pattern. 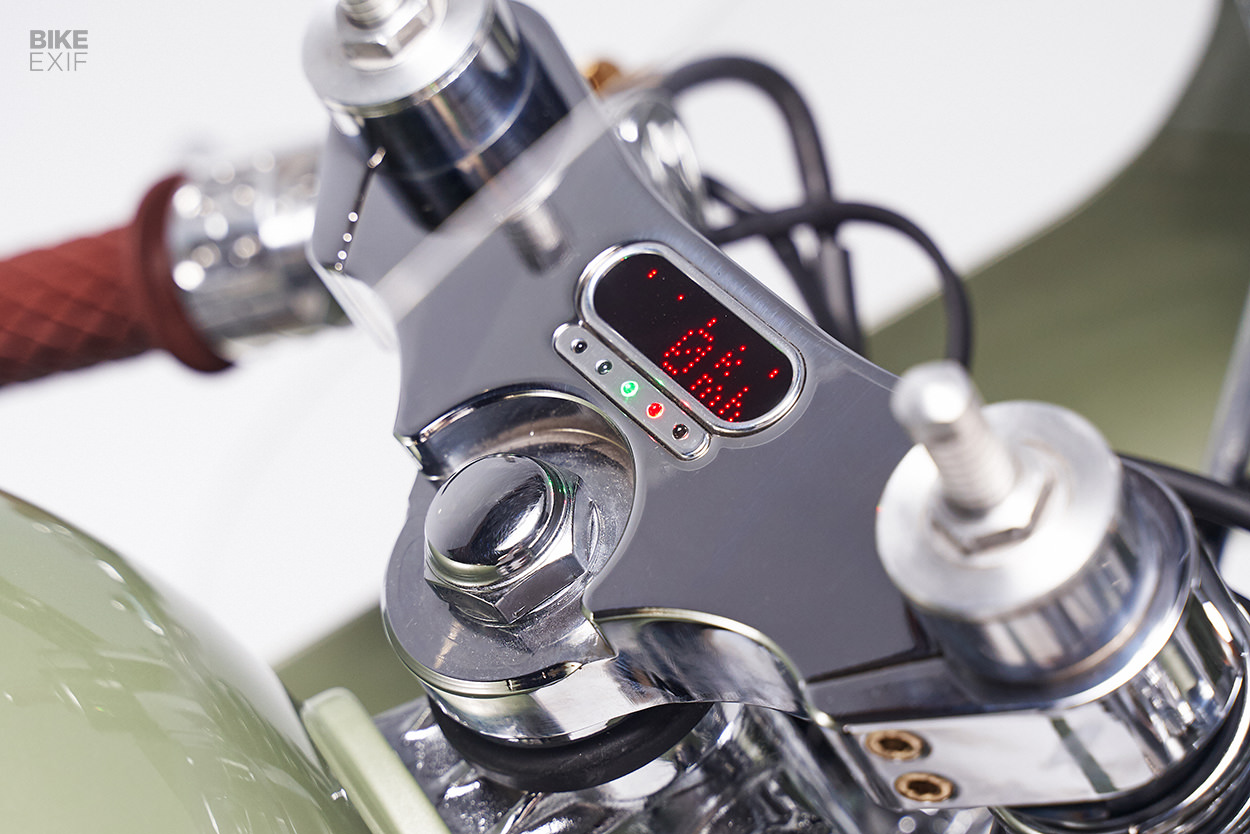 The cockpit features a riser-less top yoke with a Motogadget speedo embedded in it, one-off clip-ons and KustomTech levers. Smaller details include new foot pegs, drilled heel plates and a host of brass fasteners. Tamarit also rewired the bike, and relocated the battery to a new box under the swingarm.

Since this is their 100th build, Tamarit went all out on the finishes. The green paint job is as subtle as it is sublime, punctuated by custom badges with gold and brass touches. Metal parts like the subframe, swingarm and valve covers were all treated to chrome plating. 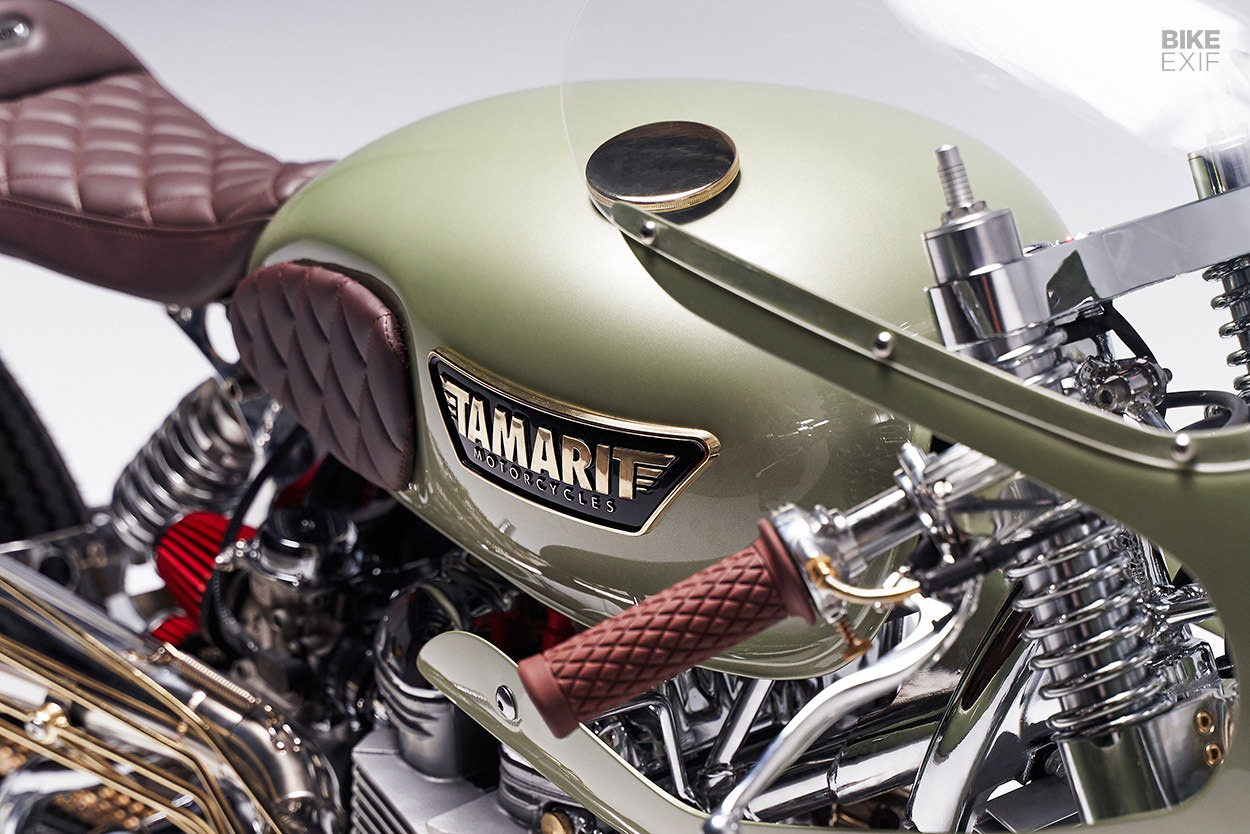 Kudos to Tamarit for making it to 100 builds, and for doing it with a café racer that exemplifies good taste. And if you’d like to make it yours, they’ll be auctioning it off with the French auction house, Artcurial, early next month.

Go on, treat yourself. 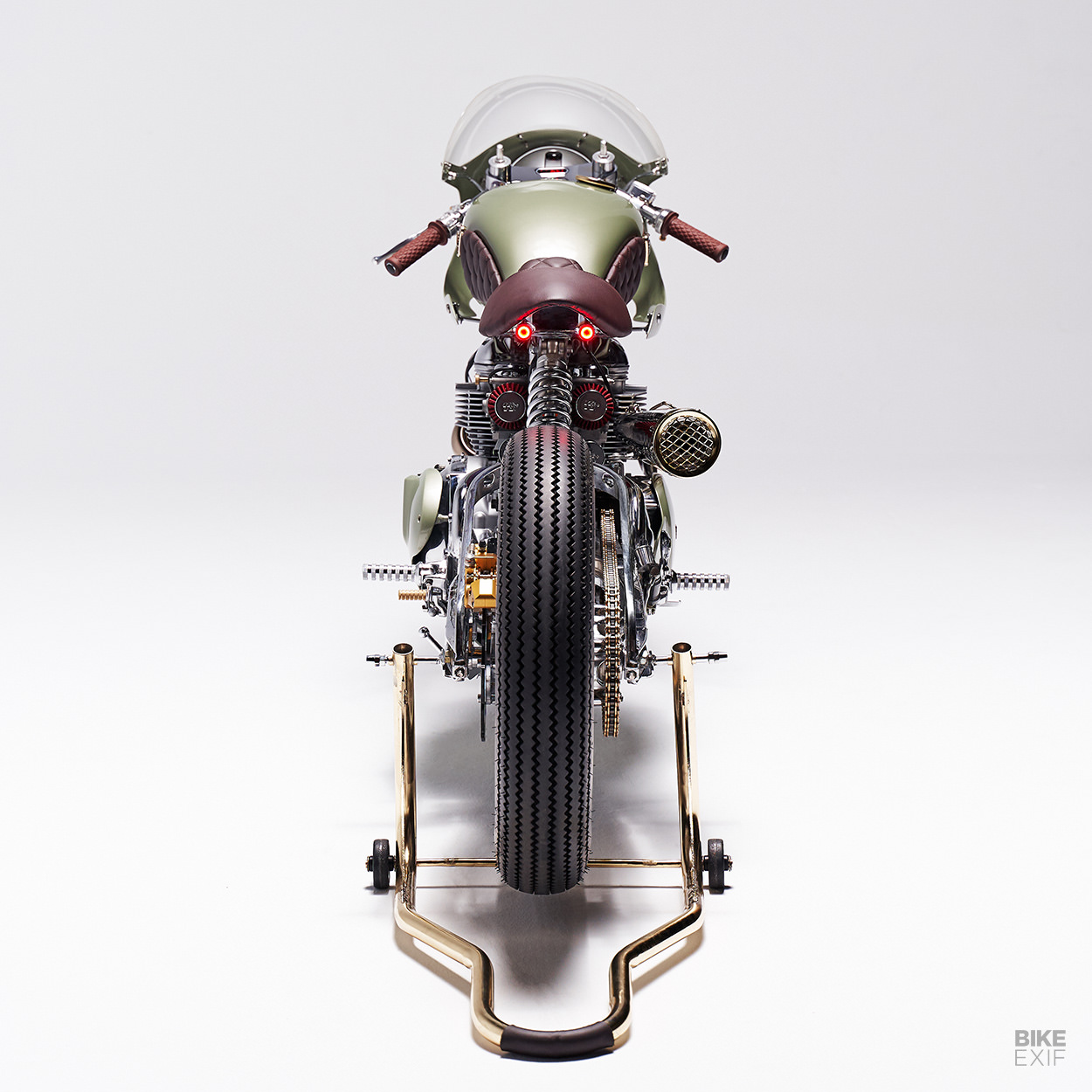