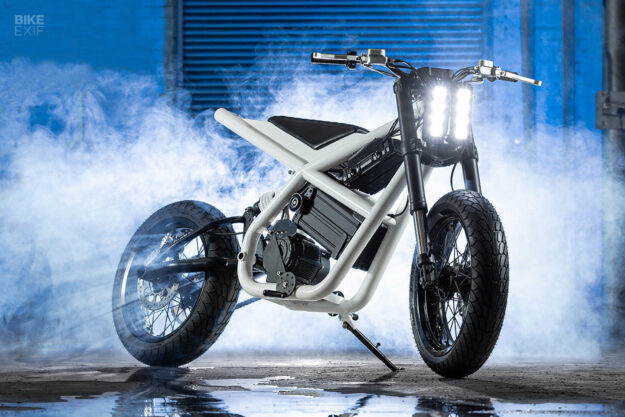 While some are skeptical about the future of electric motorcycles, others, like Adam Kay, are far more enthusiastic. So enthusiastic, in fact, that he’s just named his latest project ‘Death to Petrol.’

It’s all very tongue in cheek of course. As the founder of Untitled Motorcycles in London, Adam has a number of petrol-powered customs under his belt—and he plans to build more. But he’s also pragmatic about the future, and curious about the potential of electric drivetrains as a platform for customization. 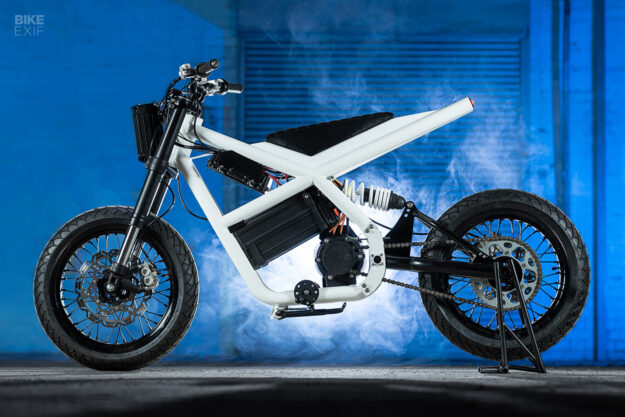 “Can the basic rules for designing a motorcycle be ripped up?” he asks. “Do you need to hold the bike with your legs? Where and how should the rider sit? Tank or no tank? Foot peg position? Road presence? Speed versus noise?”

It’s this train of thought that led Adam to design ‘DTP.’ Pieced together from a custom frame, a prototype motor and a handful of off-the-shelf parts, it’s a great case study in how a compact electric urban motorcycle could look and ride. 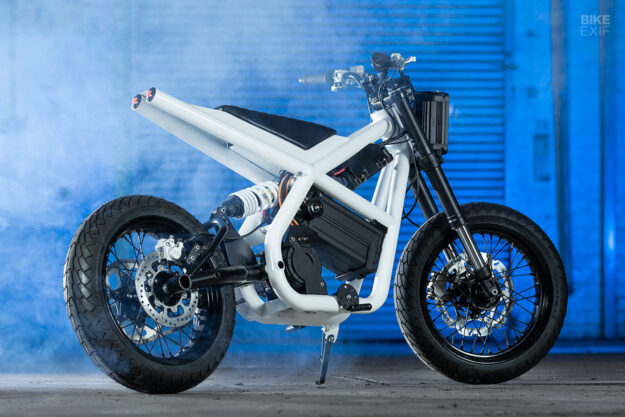 “Inspiration came from a large diameter framed mountain bike I rode over 20 years ago,” he tells us. “I wanted something similar and fun-looking for this design. No one makes large diameter motorcycle frames for petrol motorcycles, so I thought an electric motorcycle can be anything you want it to be.”

Not only did Adam want a tubular chassis—he also wanted to overtly show the bits that make the bike function. “No panels hiding anything here,” he says. “The motor, battery and controller can all be seen.” 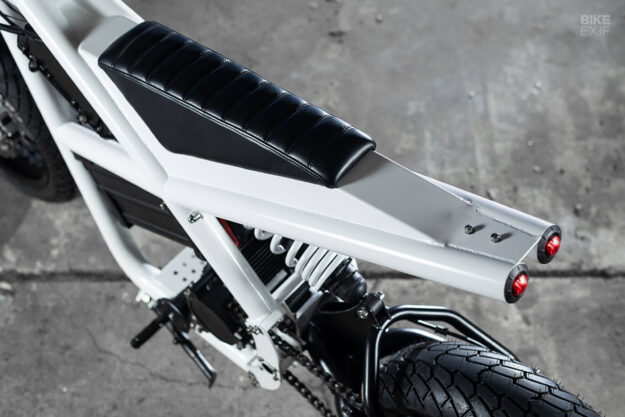 Step one was to pen a basic line sketch of the electric supermoto concept. Next, Adam sent his sketch to Jack Lennie—a product designer known for creating ‘Tinker,’ a no-weld motorcycle kit that can be downloaded, CNC-cut and bolted up. Adam and Jack refined the design until they had fully fleshed-out CAD drawings to work from.

Those files then went over to Mike at Survivor Customs to build the frame. Mike tacked it together with 50 mm tubing, along with a custom swingarm that uses a braced mono-shock design. The design is as barebones as it gets; the only real piece of ‘bodywork’ is a boxed section up top that holds the seat. 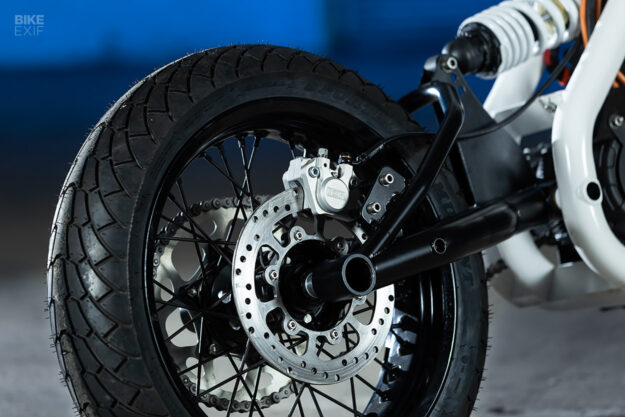 The forks, yokes and rear shock all come from a KTM 390 Duke. The 17” wheels are SM Pro parts, wrapped in Dunlop Mutant rubber and stopped by ISR brakes hooked up to Venhill lines. Since there’s no clutch, both of the brakes are triggered via ISR controls on the handlebars—just like on a mountain bike.

For the motor, Adam turned to the electric bike manufacturer Sur-Ron. “I rode a Sur-Ron Light Bee off-road, which was great fun,” he says. “So I contacted them directly, and bought an experimental motor from them.”

Adam mounted up the Sur-Ron motor with a new battery and controller. Power is sent to the back wheel via a chain drive, with the motor attached to a base plate that allows it to be moved back and forth to adjust the chain tension.

With everything in place, Adam roped in Paul Taplin to bring his creation to life. Paul was invaluable to the project, wiring it all up in less than a day. But this is just phase one—the guys plan to redo everything with a slimmer wiring loom, built around a Motogadget controller. 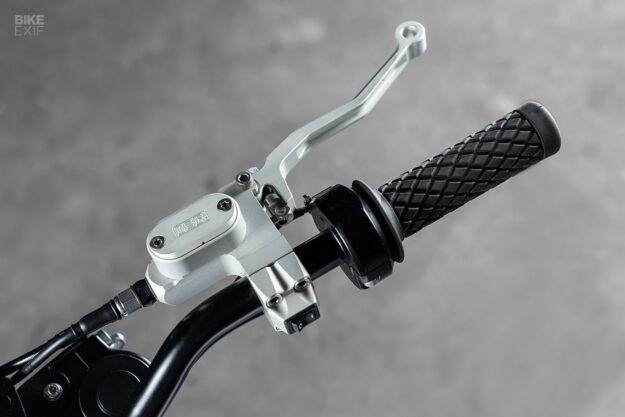 Up top are a set of Renthal bars, fitted with Biltwell Inc. grips and custom switch housings that double up as brake lever clamps. Out front is a twin LED headlight from Durite, with a pair of LED taillights from Alchemy parts embedded in the back of the frame. Tiny Motogadget LED turn signals are mounted discreetly to tabs on the frame.

Glenn Moger added a hit of leather on the supermoto-style seat, while Aurum Finishing handled the powder-coating.

DTP hits the mark visually, eschewing traditional motorcycle design for something that’s both quirky and aggressive. As for performance and range, Adam makes no bones about the fact that this is designed as a short range weapon.

“The top speed is limited to 50 mph,” he says, “but it’s all about acceleration for a city motorcycle. The range is dependent on your style of riding—DTP is about urban fun rather than long countryside rides.” 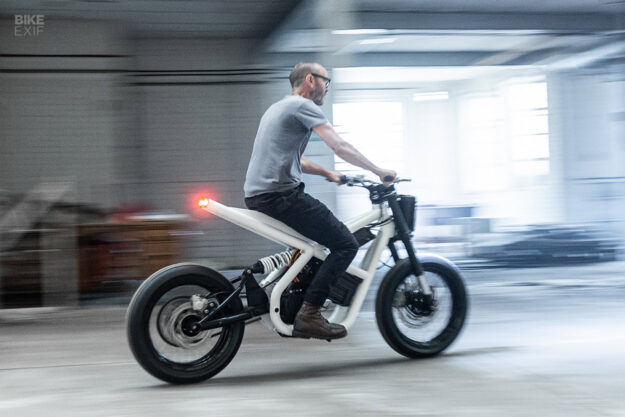 The numbers aren’t final yet either, because DTP is technically a prototype. Adam’s planning a small production run of these once he’s done more testing and tweaking, with a target curb weight of under 155 lbs.

We’d certainly be tempted… how about you? 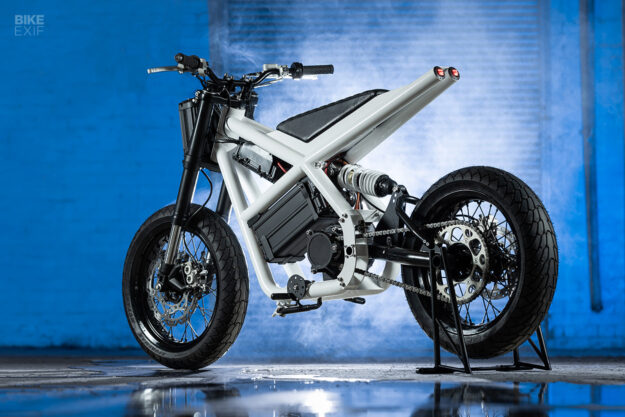