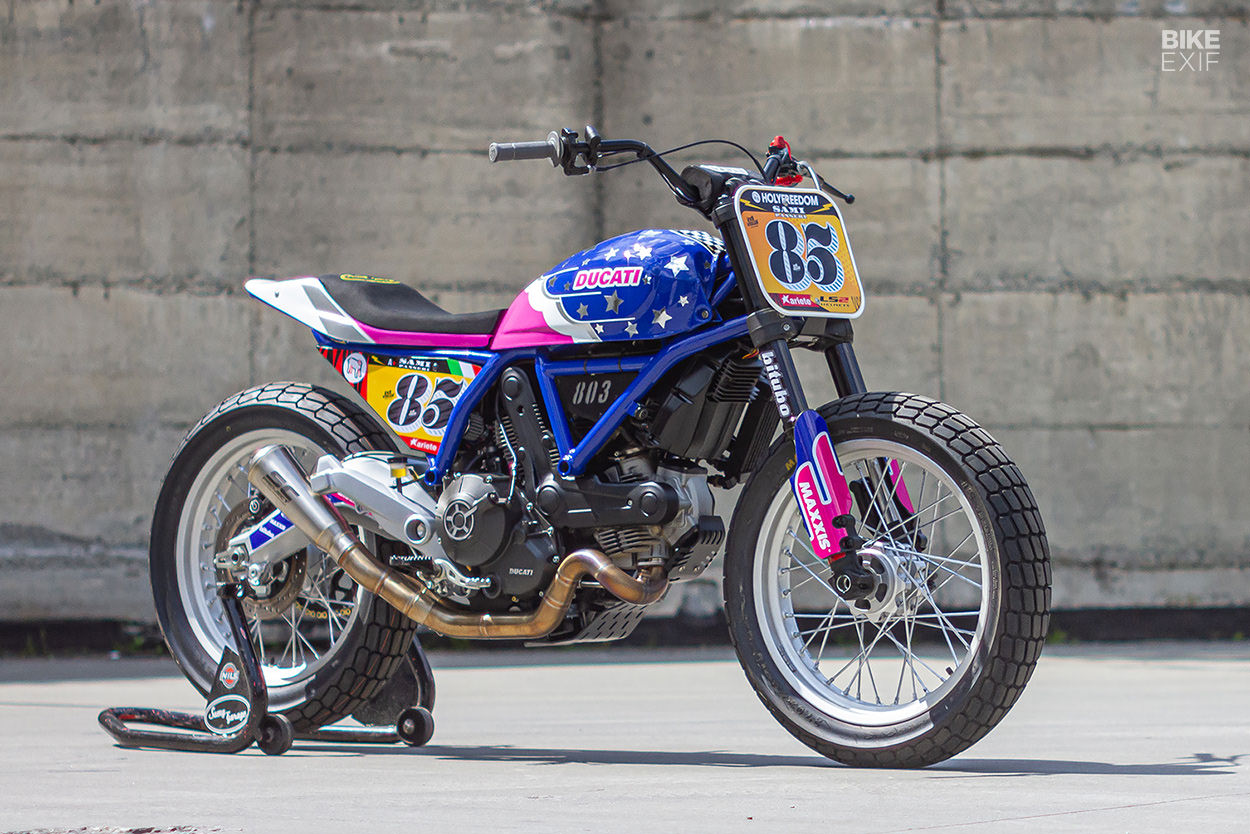 Paint is the last thing that happens on a custom job, but it’s the first thing that people notice. And the livery on this race-ready Ducati Scrambler is unmissable. A zany combination of blue, magenta and reflective silver, it’s about as subtle as a Tarantino flick.

Built in Italy, this Scrambler is the product of a collaboration between Samy Garage and Greaser Garage. Samy Garage is the moniker for flat track racer Sami Panseri, who spins spanners in his home garage about 25 miles outside Milan. And Greaser Garage is a full service custom shop based in Genoa. 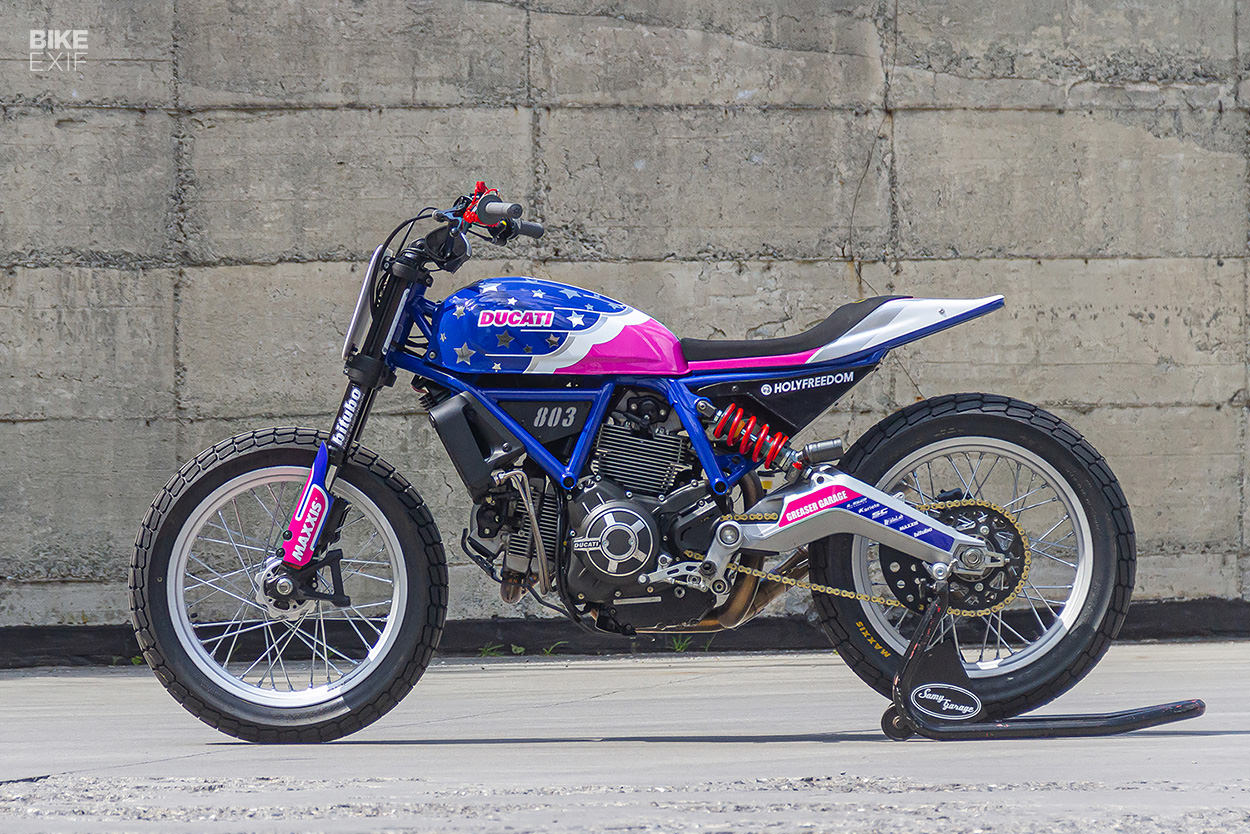 This is Sami’s personal race bike, so he needed it to go fast rather than to just look pretty. The Greaser guys got the call to come up with a race-worthy paint scheme, and Sami gave them free rein. So naturally, they went wild.

“We only told Sami that some blue would be involved in the process, but we kept our mouths shut about all the rest,” says Greaser team member and photographer, Matteo Scarsi. “So he had his frame painted in this blue tone, to match the work that was simultaneously going on in our workshop.” 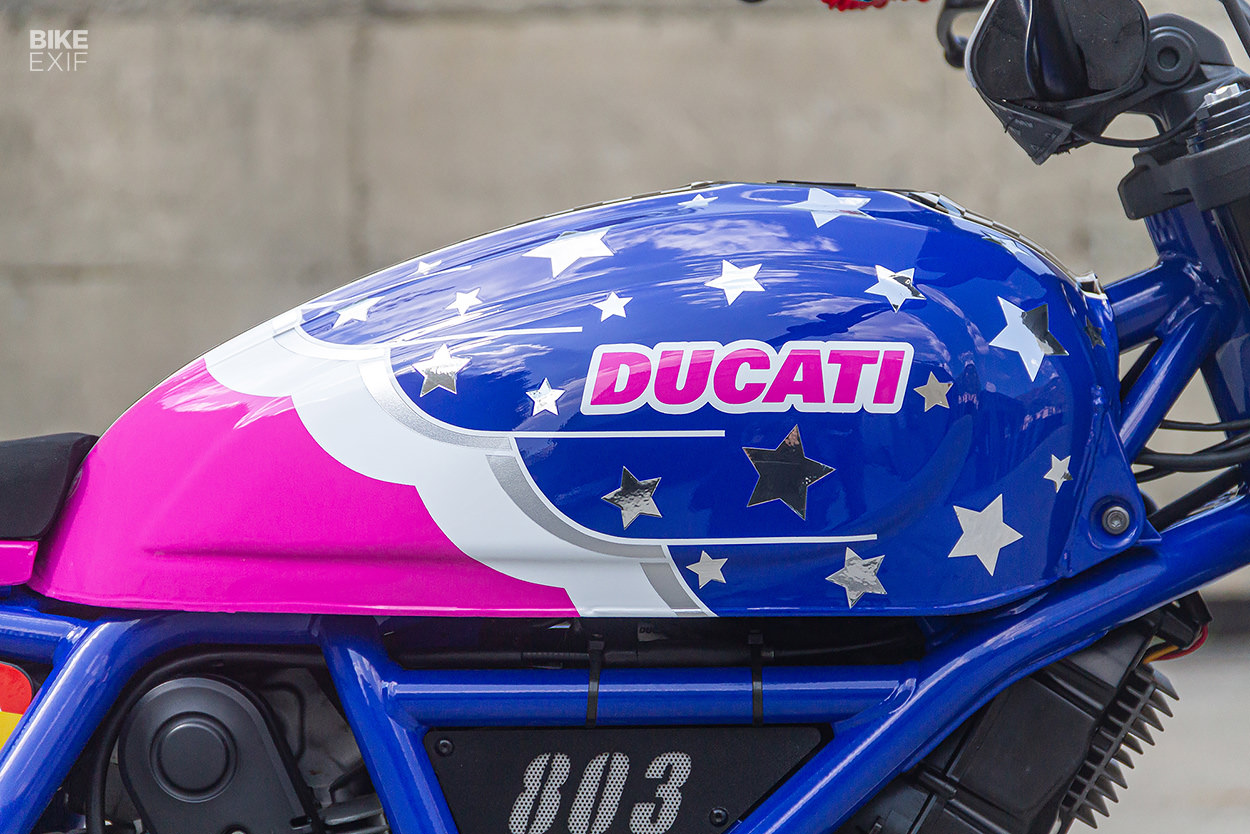 To nail the vibe, Matteo created sketches, then digital renders of the final livery. The blue and magenta sections are punctuated by hits of white and chrome silver. From the 70s-style checkers on top of the tank to the array of stars on the side, it feels chaotic … but it’s actually all very considered.

“The stylized wings on the tank sides are an ommagio to the old Ducati logo,” explains Matteo. “Together with the silver shades and chrome stars, they give the bike a USA flavor, in honor of the country where this type of racing became famous. We tried to create something faithful to the heritage of the sport, that also could incorporate contemporary inspirations and ideas.” 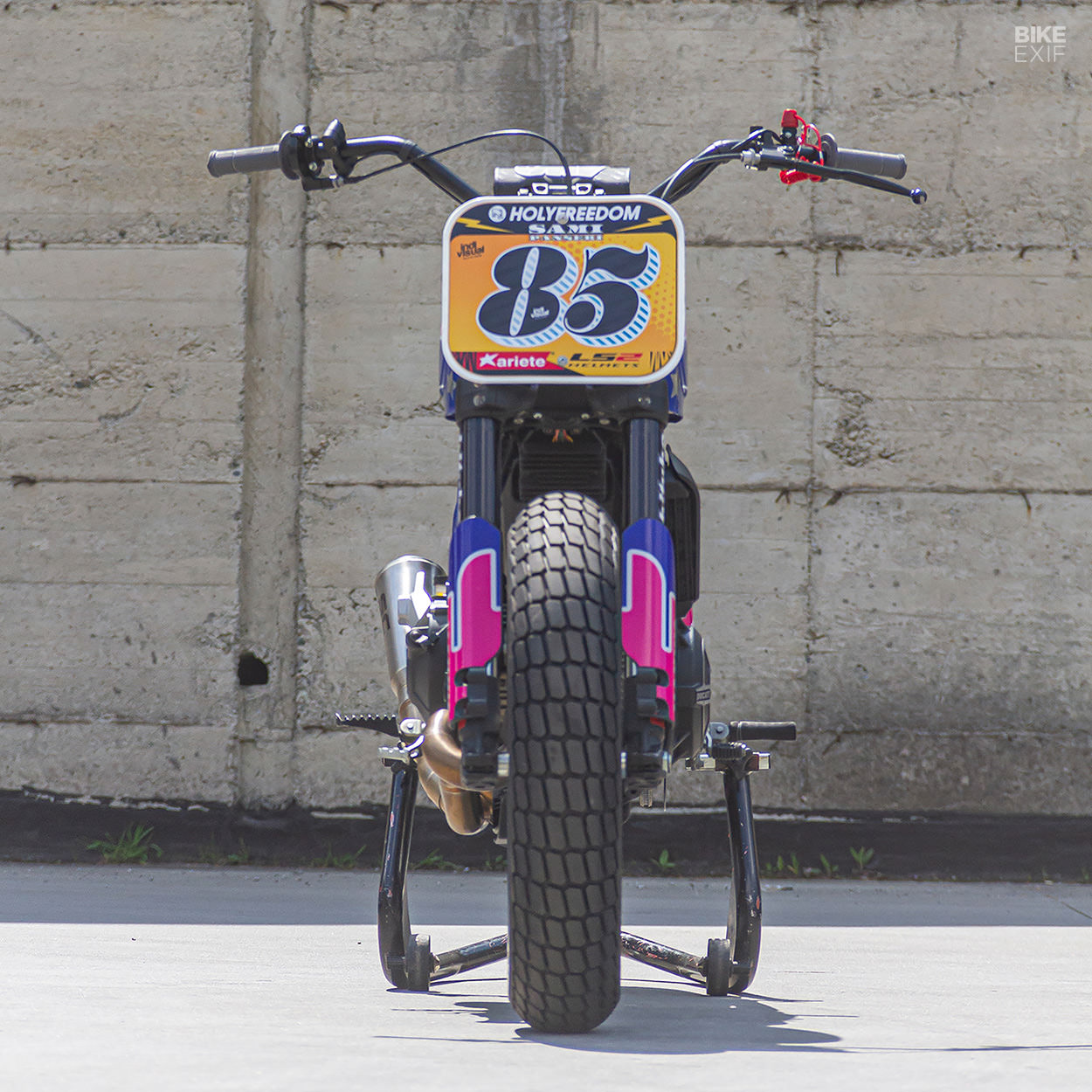 Of course, Sami’s Ducati is more than just a design exercise. Lurking under those radical graphics is a whole spread of tasty racing upgrades.

For starters, Sami’s Scrambler is the basic ‘803’ model, so it needed new wheels out the box. Using the stock hubs and a pair of 19” Ducati Scrambler Desert Sled front rims, he laced up a new set of wheels and wrapped them in Maxxis dirt track tires. He removed the front brake too, obviously. 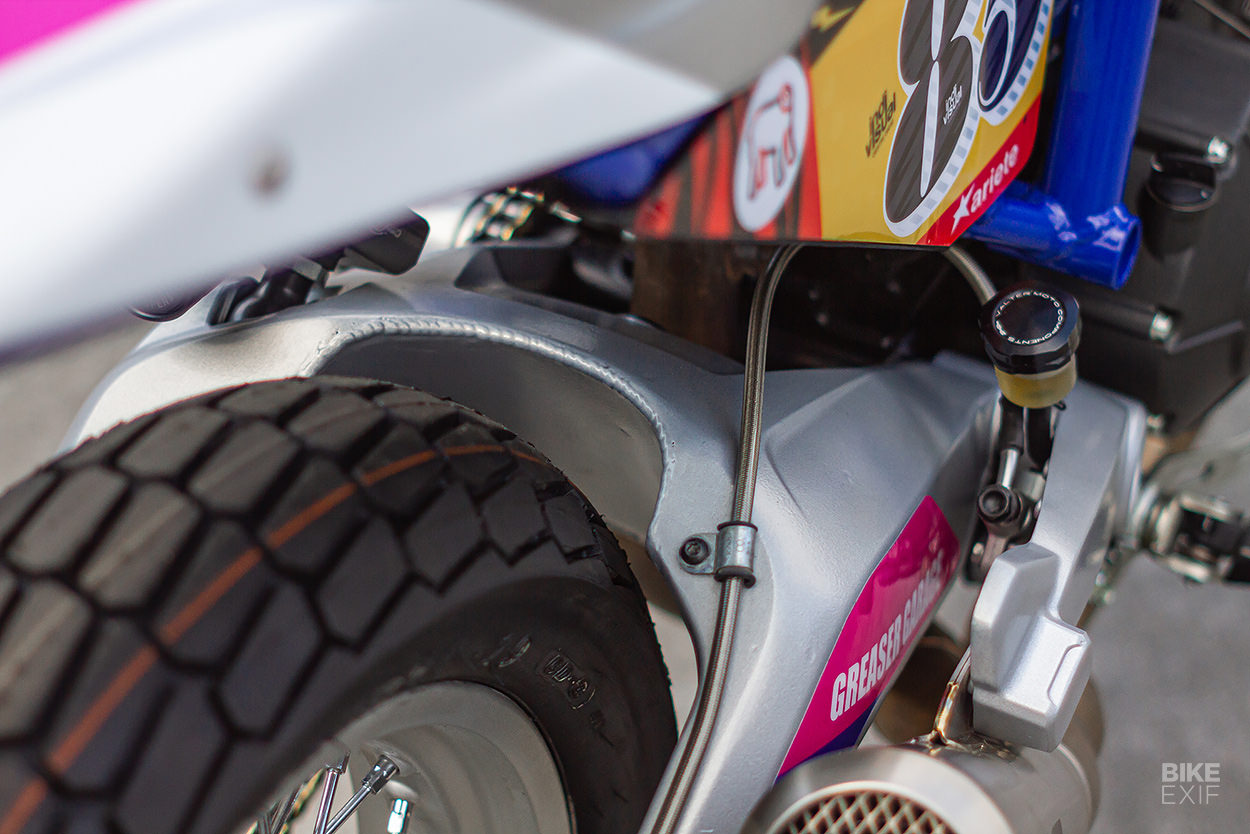 Getting the 19” rear tire to fit was a challenge though, since Sami didn’t want to change the bike’s wheelbase by extending the swing arm. Instead, he modified the swing arm with a cutaway to add clearance, calling in a specialist to weld it shut afterwards. It’s a tight fit, but it works.

Moving to suspension, Sami installed a fork cartridge kit and a new rear shock—both from Bitubo. He also modified the frame to remove the steering stops for maximum slide-ability, and cut and looped it at the back. 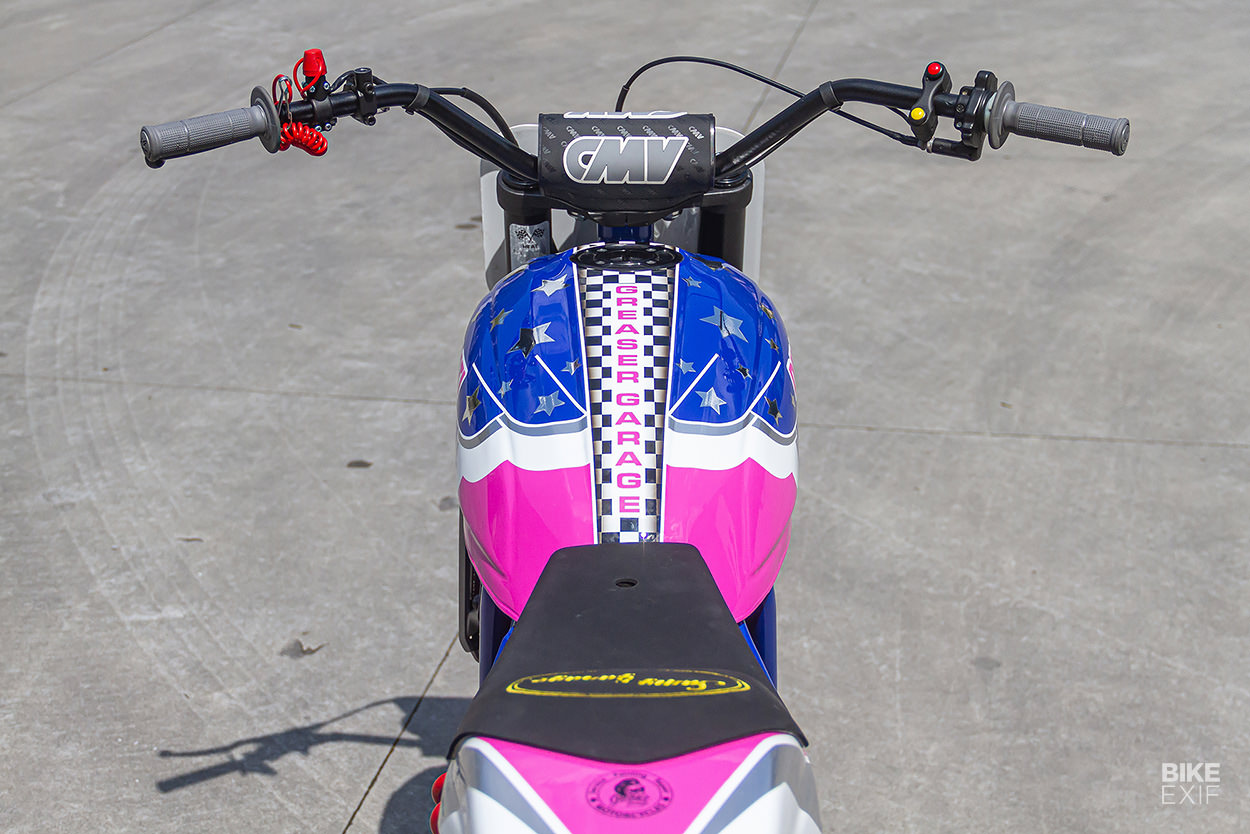 Up top is the stock fuel tank, followed by a replica Bultaco Astro flat track tailpiece. It’s capped off with a neoprene seat pad, adorned with the Samy Garage logo in yellow. Peak around the side and under the tail, and you’ll spot custom-made panels to keep the wiring hidden away.

Sami rewired the bike to ditch all the street legal bits he didn’t need. The cockpit’s extremely simple now: a set of custom bars from CMV on set-back risers, the essential switches, and a mandatory lanyard kill-switch. A front number board finishes things off, with decals from another collaborator, Indivisual. 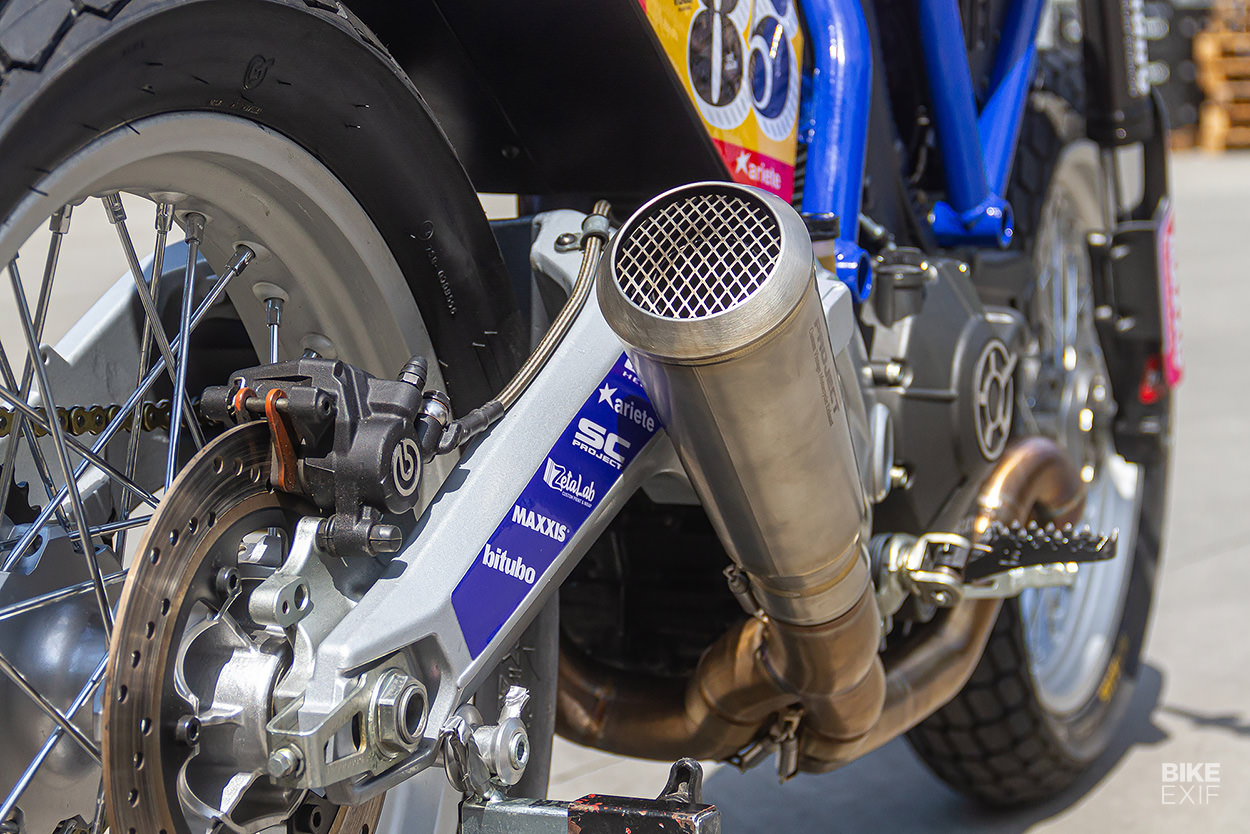 Under the hood, Sami’s boosted the Ducati’s output with a new intake kit from Starace and a new ECU map from Up Map. The exhaust consists of an SC Project muffler, mated to custom oversized headers.

This zany Scrambler is now ready to tear up the track. Sami will be piloting it at the German Krowdrace event, in the Hooligan class, and at the Coppa Italia race in Italy. Then he’ll race it wherever else he can, as the pandemic permits. 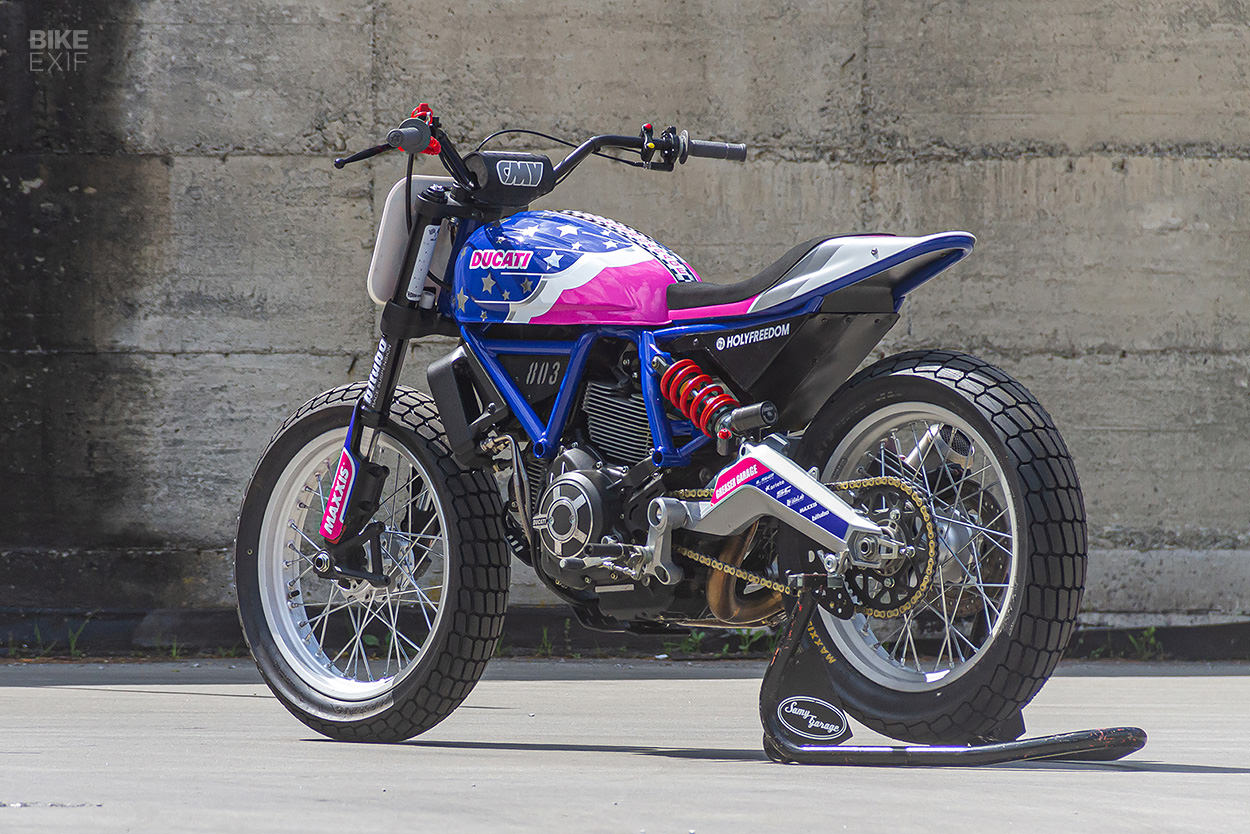 “We followed the ‘go big or go home’ rule,” says Matteo, “so we didn’t leave anything on the line. This Scrambler must be visible, even from space—and since everything will be immediately be covered by dirt and dust as soon as the bike hits the track, we’re pretty sure Sami will still be recognizable.” 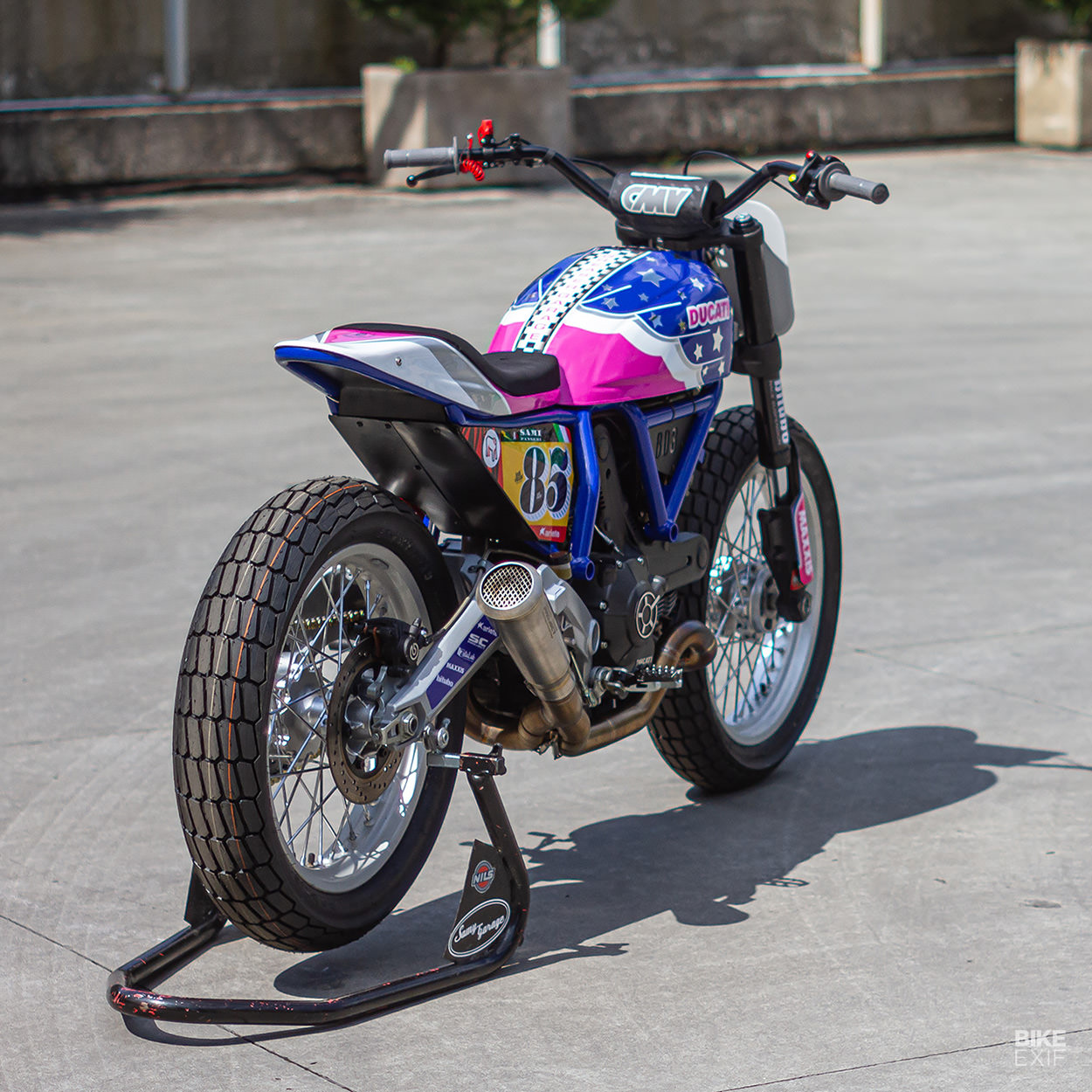