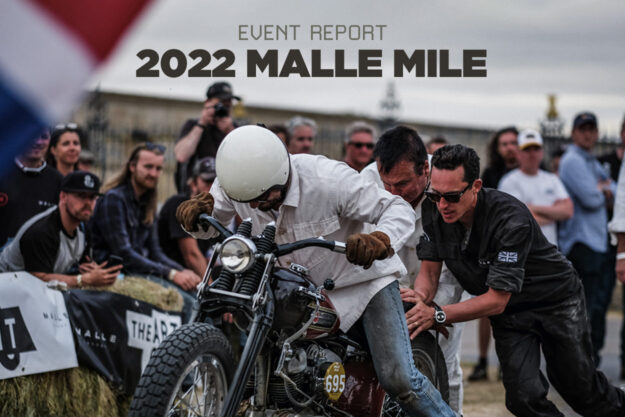 You’ll see anything and everything at the Malle Mile. Vintage dirt bikes, modern classics and customs; new motorcyclists and crusty old bikers; kids and dogs; a superbike with ape hangers and knobbly tires; a drag queen dropping the flag on a drag race in front of a castle.

The Malle Mile is one of the most unique events on the calendar, held at one of the most unlikely venues. It’s a frenetic cacophony of petrol, dust, music and enthusiasm—and we were there to take it all in this year. 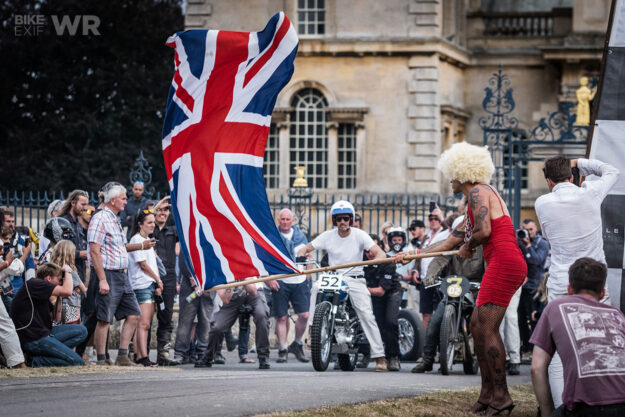 The event is organized by the motorcycle luggage and apparel brand, Malle London. This year marked its eighth running, and the second to be held at Grimsthorpe Castle—a centuries-old estate in Lincolnshire 100 miles north of London. Impossibly picturesque, Grimsthorpe’s 6,000 acres of sprawling lawns, rolling hills, forests and interwoven dirt roads provided the perfect backdrop for the shenanigans put on by the Malle crew. 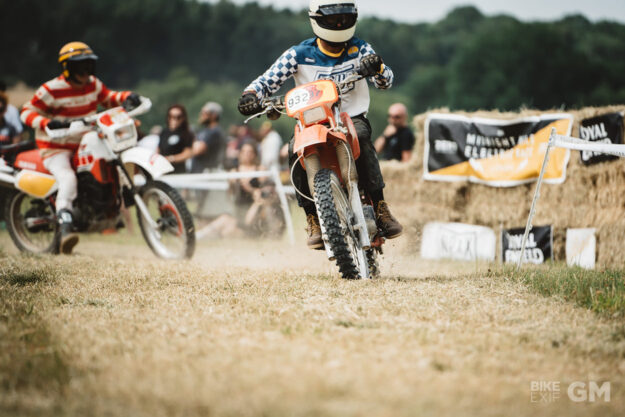 The three-day festival (plus change, if you count Thursday evening’s opening proceedings) was centered around what Malle call “inappropriate” motorcycle racing. For the whole weekend, all types of bikes, ridden by all types of riders, duked it out over a number of race courses.

The ‘Mile Sprint’ is an eighth-mile sprint up a grass track, while the ‘Hill Climb’ is a head-to-head scramble up a winding course. In the ‘Malle100,’ 100 riders battle it out in groups of 10, on a one mile off-road track with a Le Mans-style running start. 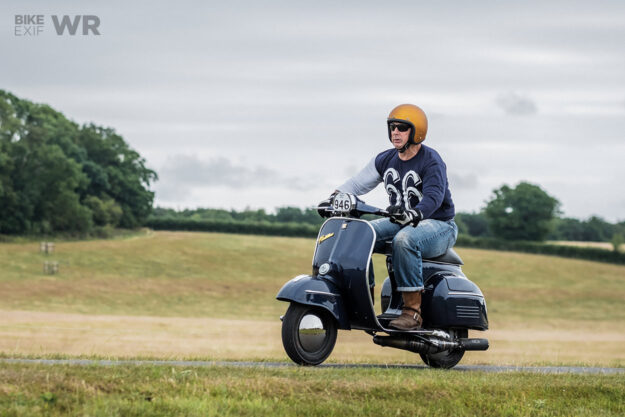 Then there’s the ‘Dash’—an eighth-mile time trial along the narrow strip of asphalt that runs adjacent to the main festival arena, reserved for bikes with road tires only.

There were classes for classics (pre 1979), antiques (pre 1965), custom bikes, road legal scramblers, and lightweights, which included mopeds and scooters. The ‘Novice’ class was a ‘run what you brung’ division for Mile virgins. There was a women’s class too, though women were encouraged to race in other classes too (and they did). 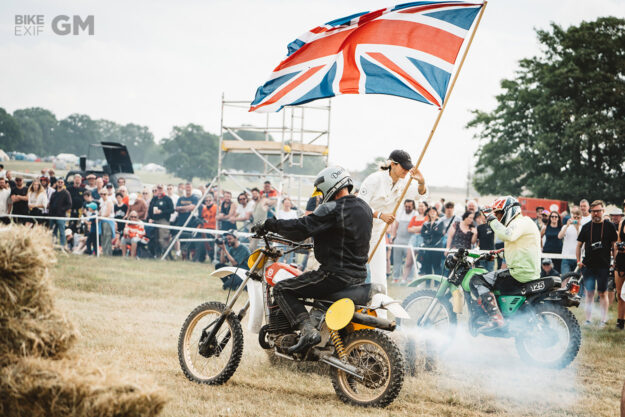 None of this was taken very seriously, of course. The spirit of the Malle Mile is that “everyone loses together,” so fun trumped competitiveness. Whacky outfits were a common sight, and it wasn’t unusual to see competitors with bikes that were wildly mismatched in size or power.

The Malle’s brilliant commentators, Ben Bowers and Anthony Partridge, only added fuel to the fire, constantly heckling anyone brave enough to step up to the starting line. 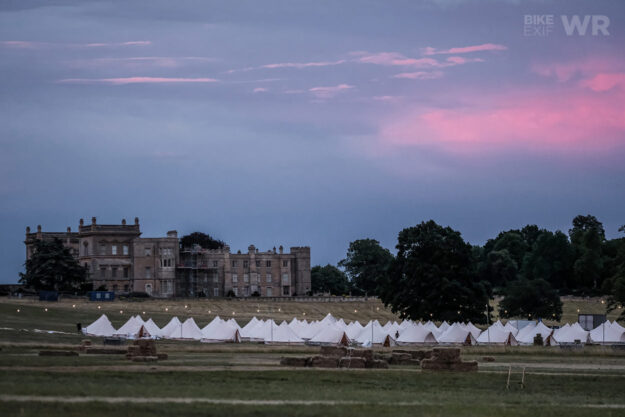 It wasn’t just about racing at the Malle Mile; the event turned the grounds of Grimsthorpe into its own little village for the weekend. Many attendees stayed over for the entire three days, either in tents, caravans, motorhomes or pre-booked ‘glamping’ accommodation. We were housed in a spacious bell tent with a carpeted floor, air mattresses that actually stayed inflated and plush bedding. 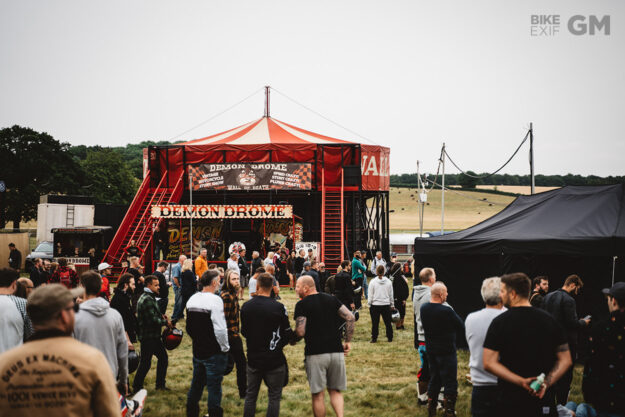 A stone’s throw from our tent was the festival’s central hub, jam packed with exhibitors, food trucks and a well-stocked ‘lubrication station.’ We shot the breeze with Sideburn’s Gary Inman, the crew from CCM Motorcycles, our friends at Royal Enfield, and more amazing, like-minded people.

Off to one side, the ‘Demon Drome’ offered up hourly wall of death displays. Elsewhere, contestants tested their speed and balance on an obstacle course, with Super73’s zippy electric bikes. 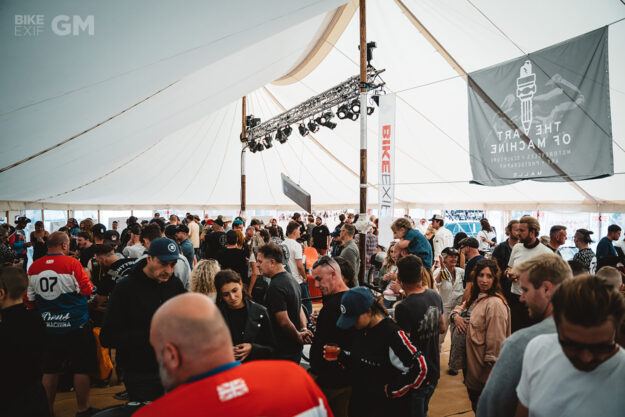 That’s also where we hosted the ‘Art of Machine’ exhibition, featuring some of the best bikes we’ve featured in recent times. Visitors ogled over the creations of Foundry Motorcycles, Rough Crafts, Bad Winners, Bob’C Custom Motorcycles, Double Six, Dirty Dick’s Motos, 10 ’til 12 and more. Parked just outside the tent were a Porsche 911, a Ferrari Testarossa, and the Bowler Fast Road Defender that acted as our team car for the trip. 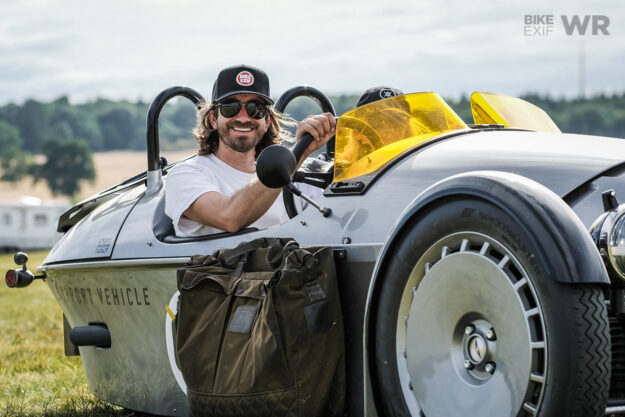 The organizers managed to cram a Red Bull F1 car in there too, and used the space to unveil a special collaboration with the boutique car manufacturer Morgan. They’ve just built a custom ‘Malle Rally Spec’ version of their Super 3, which will act as a support vehicle on the next Malle Rally trip. (Head over here if you’d like a chance to drive it.)

Another Super 3 spent the weekend outdoors, zipping from race to race. 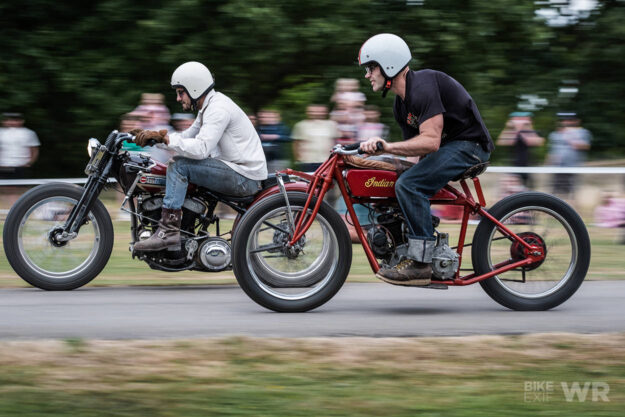 The ‘Art of Machine’ tent emptied out late Saturday afternoon, as bikes were wheeled up to the main castle driveway for the ‘Art of Sprint’—a sprint race reserved for bespoke and exotic vehicles. It’s not often that we get to see (and hear) the bikes we feature in action… and it was well worth the price of admission. 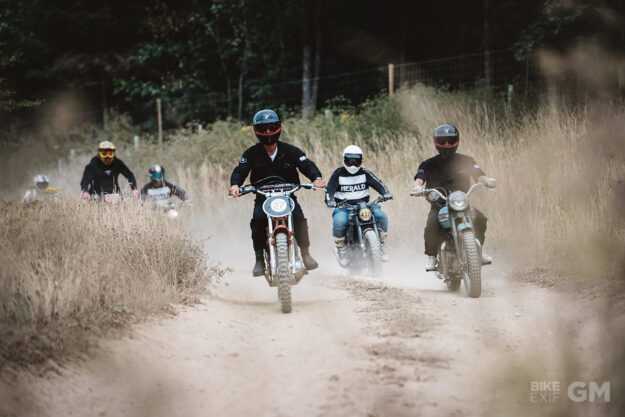 Another major highlight was the ‘Scramble,’ a non-competitive group ride along a 6 mile course, with a pause inside a disused quarry. Despite running multiple times a day, it was always packed with riders. It was hella dusty too—Royal Enfield loaned us a pair of their brilliant Scram 411s to ride the scramble on, and we’re still washing the dirt from our clothes.

As the sun got low each night, an outdoor cinema screen played motorcycle films on loop, while electric bikes raced up the hill silently. 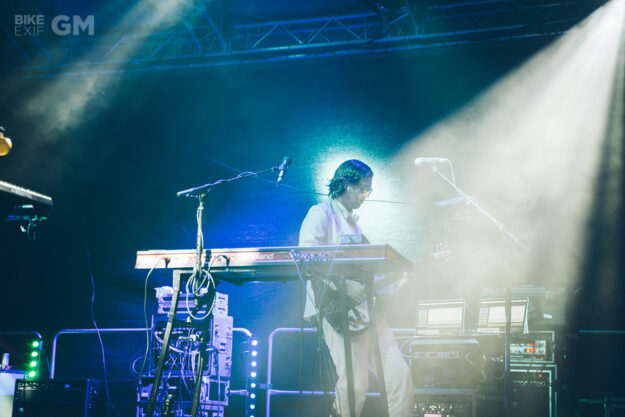 Meanwhile, the main stage lit up with a brilliant line-up of indie rock acts, headlined by The Picturebooks and Public Service Broadcasting. Sleep was a rarity, as DJ Destruction spun tunes to entertain festivalgoers well into the early hours of the morning.

Malle Mile founders Robert Nightingale and Jonny Cazzola have cooked up the formula for the perfect motorcycle festival, striking a balance between being extremely posh and just uncivilized enough. They’re the calmest of hosts too, never breaking a sweat or dropping their charming English smiles, despite the apparent chaos erupting around them. 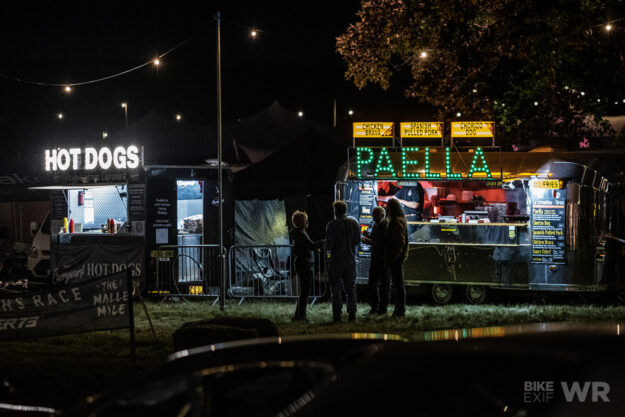 We’re back home now, but we’re already counting the days to the next Mile.

We’re looking forward to all of it; the road trip up from London, the racing, the dusty scrambles, the distant music keeping us up at 1am, the pulled pork sandwiches and banana and Nutella crêpes, the craft beer and the Jimmy’s iced coffees. 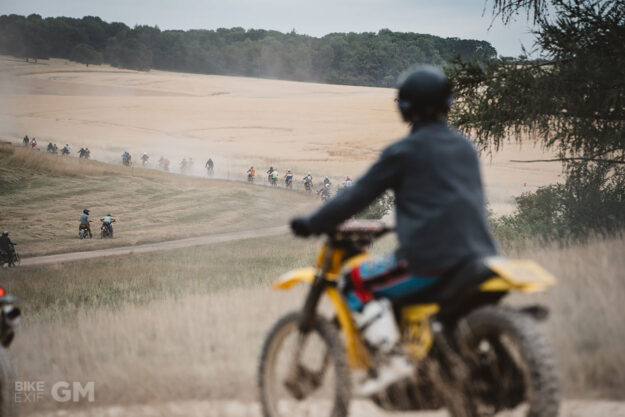 Thanks for the memories, Malle. See you soon. 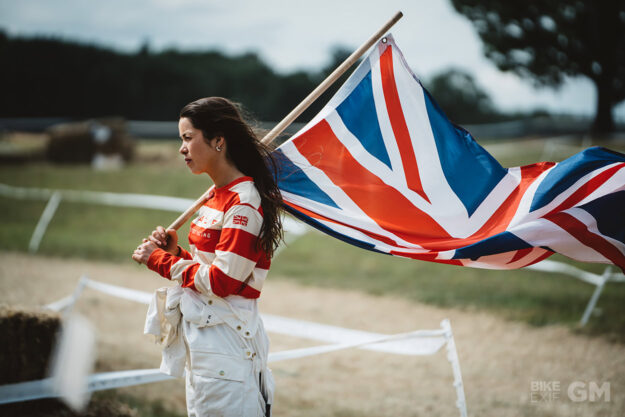 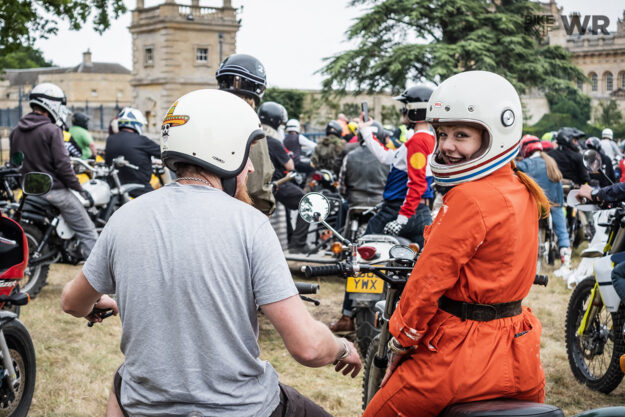 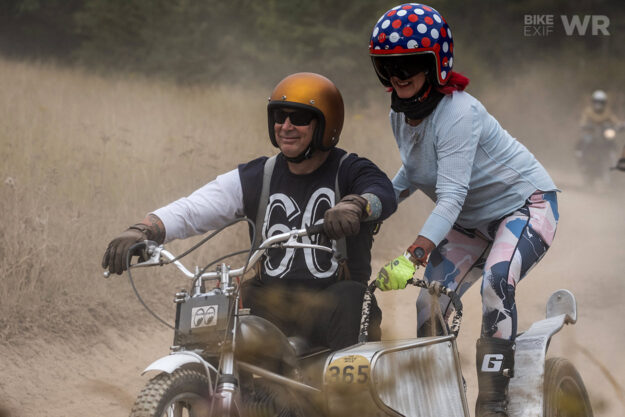 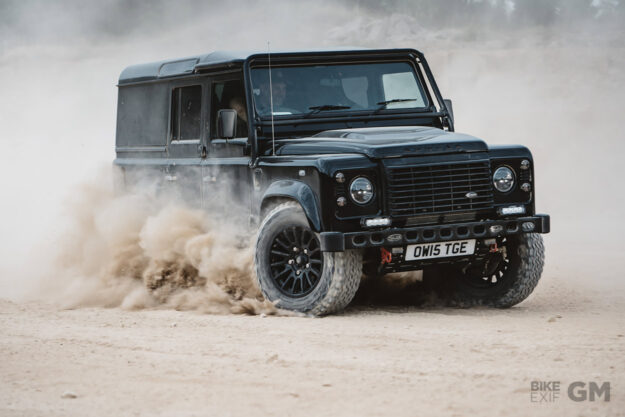 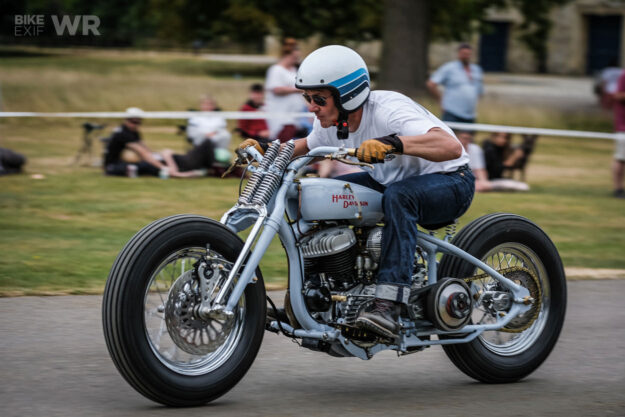 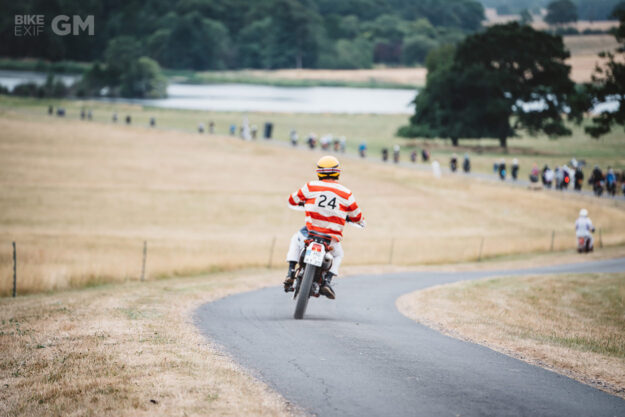