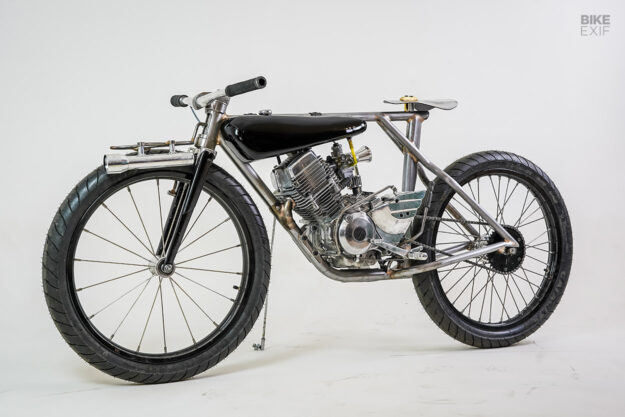 In the bicycle world, single-speed and ‘fixie’ bikes are enjoying an upsurge in popularity. Like the custom motorcycle scene, it’s an entire subculture—where style and individualization are as important as getting from A to B. But what happens when these two worlds bleed into each other?

Kevin Bergeron has the answer with this unconventional bobber. Built from scratch and powered by an early-80s Yamaha XT250 motor, it draws heavily on bicycle culture, both past and present. 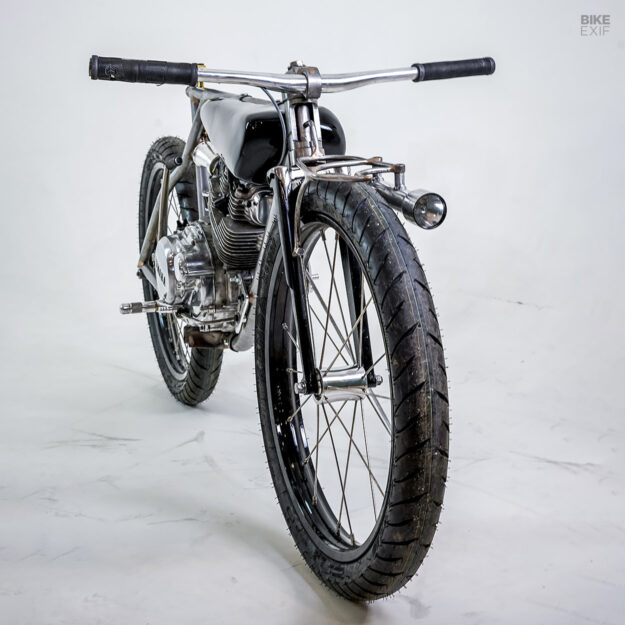 Kevin’s based in Alberta, Canada, where he works as a first responder. He spends his downtime building custom bikes out of a toolbox left to him by his late father. “I began modifying motorcycles as a way to express my artistic abilities,” he says, “but also to grieve, and, to some extent, spend time with my dad through his tools.”

Kevin had the vision for this project brewing in his mind for a while, but was finally spurred to action when Roland Sands Design launched their Dream Build Off contest. Since he was operating on budget he picked an engine he already had (the XT250), and started sketching out ideas on his iPad. 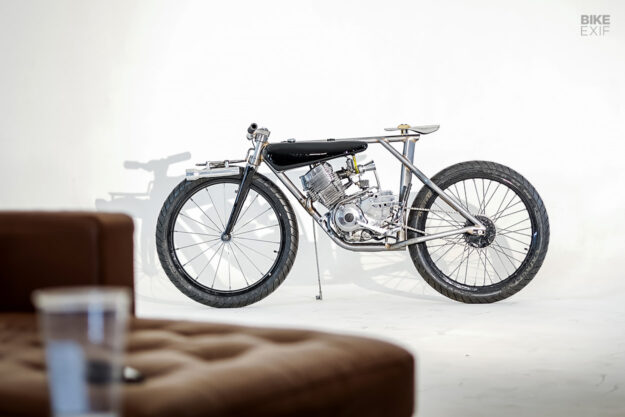 “I never grew up with enough money to own motorcycles,” he tells us, “so bicycles were the next best thing. I’ve always been drawn to their simple aesthetic, and what cleaner look than a ‘fixie.’ So I decided to let that lead the way for the vision of this bike.”

The centerpiece of the build is a tubular steel frame that Kevin bent and welded up himself. Some inspiration came from the GT ‘triple triangle’ bicycle that he grew up on—but there are nods to other bike building techniques too.

“I put my own spin on the frame and created an aero seat tube with a radial recess for the rear wheel,” he explains. “Every tube was TIG-welded, then capped with a brazed silicone bronze—a technique synonymous with older bicycles.”

There are hardly any off-the-shelf parts here. Kevin machined everything in-house on either his lathe or mill—including the rigid front forks, which replicate the single-crown models found on old road bicycles. “I designed them to look lugged—another very common bicycle building technique.” 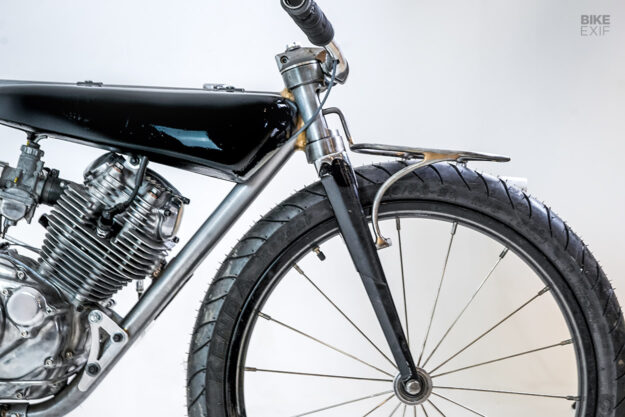 Next, Kevin turned his attention to the bike’s bespoke wheel set. The front wheel uses a custom-made aluminum hub, radial-laced to a 21” rim that Buchanans in California drilled especially for the project. For the back wheel, Kevin modified the front hub from a Honda dirt bike to accept a sprocket, then laced up another 21” rim.

Aiming for supreme minimalism, Kevin set out to design a near-invisible braking system. He started with the disc and caliper from a go-kart, then attached them to the drive sprocket. Everything’s hidden away behind an ornate cover, hand-formed from aluminum. 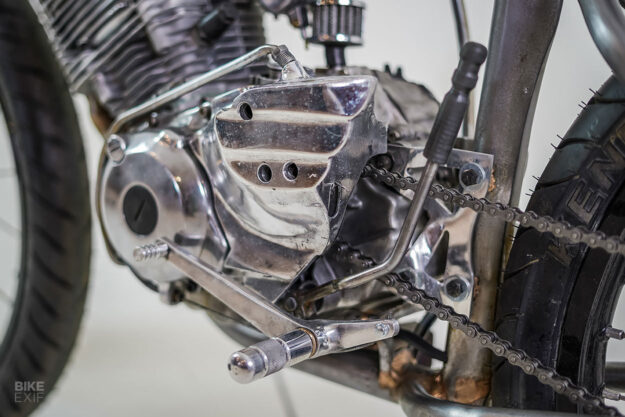 The tubing that you see running from the top of the cover hosts the brake line, directing it to the right-side foot lever. The left-side lever actuates the clutch, with a small custom-made hand lever for shifting.

The only other control is the internal throttle—a part that Kevin designed and built himself, by taking cues from older Honda Monkeys. The handlebars are Renthal units that have been polished and fitted with Eclat BMX grips. But the stem that holds them in place is a one-off. 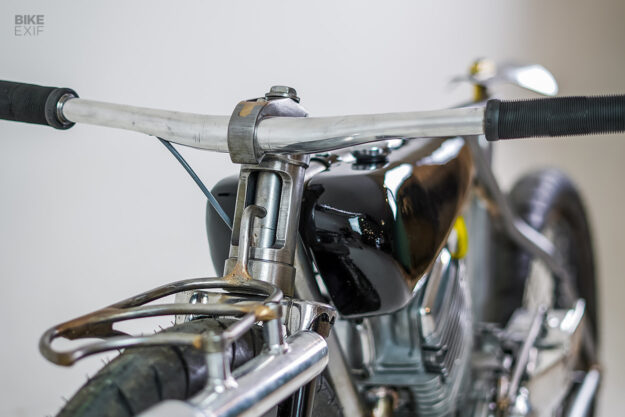 Out front is a ‘flashlight’ that was machined from aluminum, bolted to a hand-made stainless steel luggage rack. Kevin fabricated the split tanks too; one holds fuel, while the other has all the electrics packed into it. Behind them is a slim seat that he admits is neither practical nor comfortable.

As for the engine, that’s mostly stock—though it has been treated to a full top-down rebuild. “It was well used,” we’re told, “so it’s now bored to the maximum allowed tolerance.” 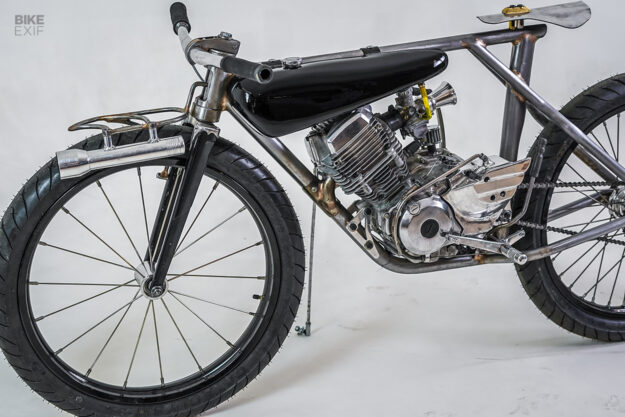 The exhaust is hard to spot at first, but it is there. Kevin built a ‘header’ to direct exhaust gasses into the frame’s down tube, with a boxy vent on the lower right side of the bike for them to exit through.

“The measuring and reinforcing involved to make the frame exhaust come to life proved to be far more difficult than I had anticipated,” he says. “Which, realistically, could be said for every single component of the bike. Through this build I have developed a new appreciation for the Max Hazans of the world, creating something out of nothing.” 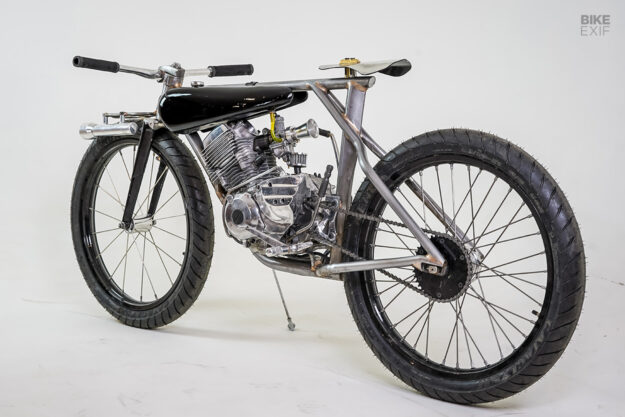 Kevin’s bicycle-inspired build took third in its class in the Dream Build Off, and walked away with the Committee’s Choice award at Canada’s annual Kickstart Motorcycle Show. But he’s not resting on his laurels.

“There are a thousand things I would do differently,” he says, “but I am proud of this step in my constant pursuit of producing high quality work. I am very much looking forward to moving onto the next project.” 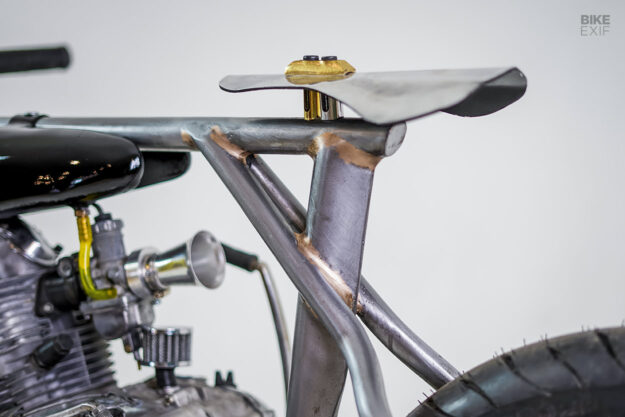 And in case you’re wondering, Kevin has actually ridden it. “I rode it three or four times and hated every minute of it. It weighs just over 150 lbs, so it’s way too fast to be a rigid.” 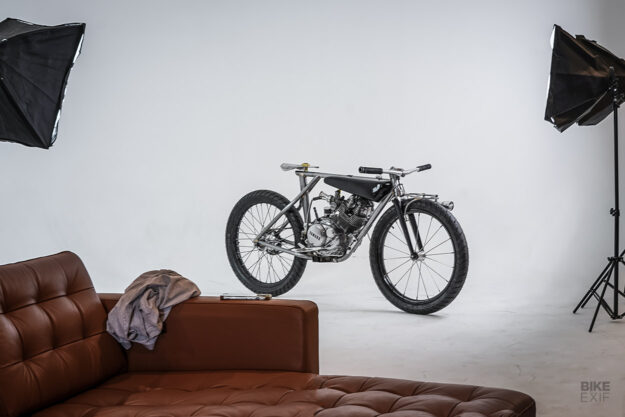