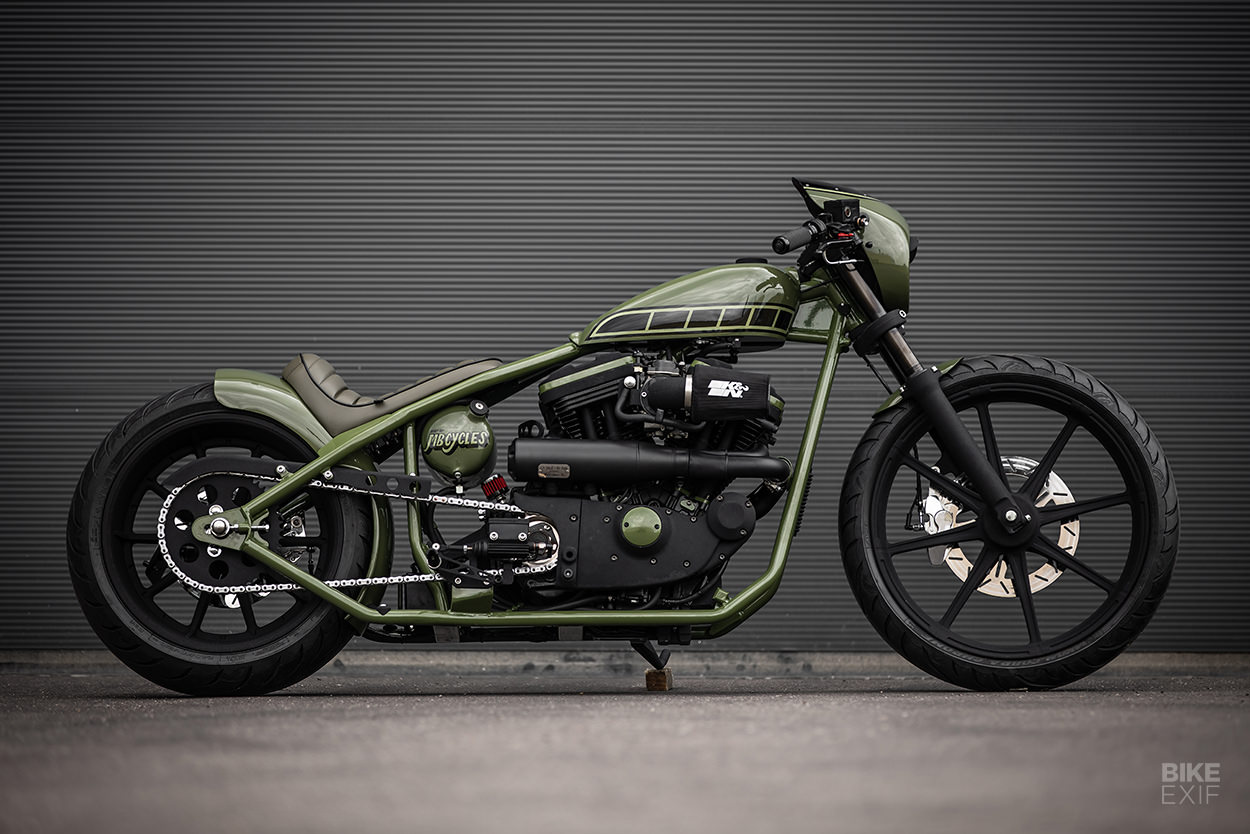 Hardtail choppers with fat rear tires aren’t typically our vibe, but we’re suckers for anything Martin Becker builds. He’s a Meister of stance and proportions, and has a great eye for detail—making his builds far too good to be ignored.

Martin’s track record is exactly why his client was happy to give him free rein. Sebastian and his girlfriend already own customs from MB Cycles, and then Sebastian walked in one day and spotted the donor for this project. 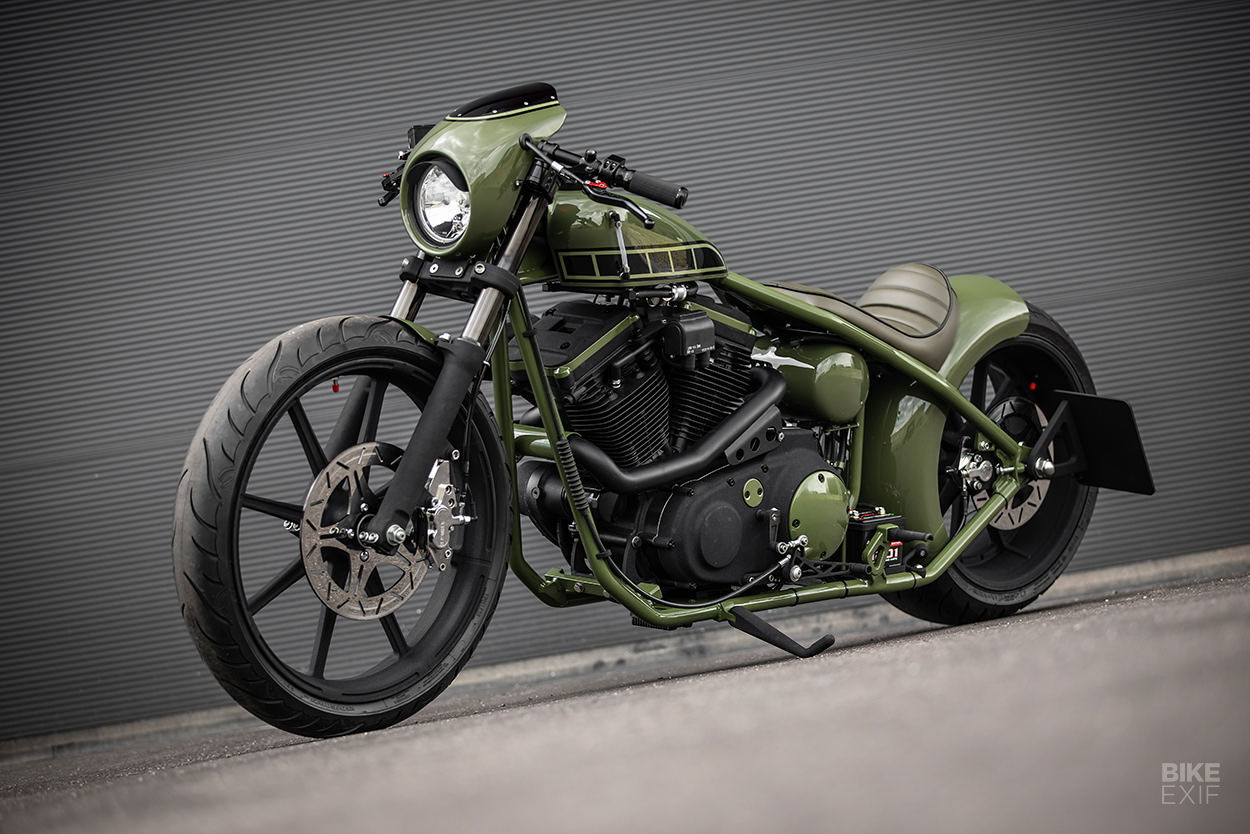 Martin had bought the Buell just two days prior; a runner with a 1996 M2 Cyclone motor, in a hardtail frame from the now-defunct German company SCS. It used to belong to a friend of his, who raced it at the Glemseck 101. That friend then sold it, and it eventually ended up in Martin’s hands.

Luckily the 1,203 cc Buell motor was still in good condition, and the bike had all the right papers. But it was well used, and a far cry from the polished machine you’re looking at now. Sebastian saw potential and commissioned the project—so Martin tore the whole thing apart, and spent four months rebuilding it as a genre-blending cafe-chop of sorts. 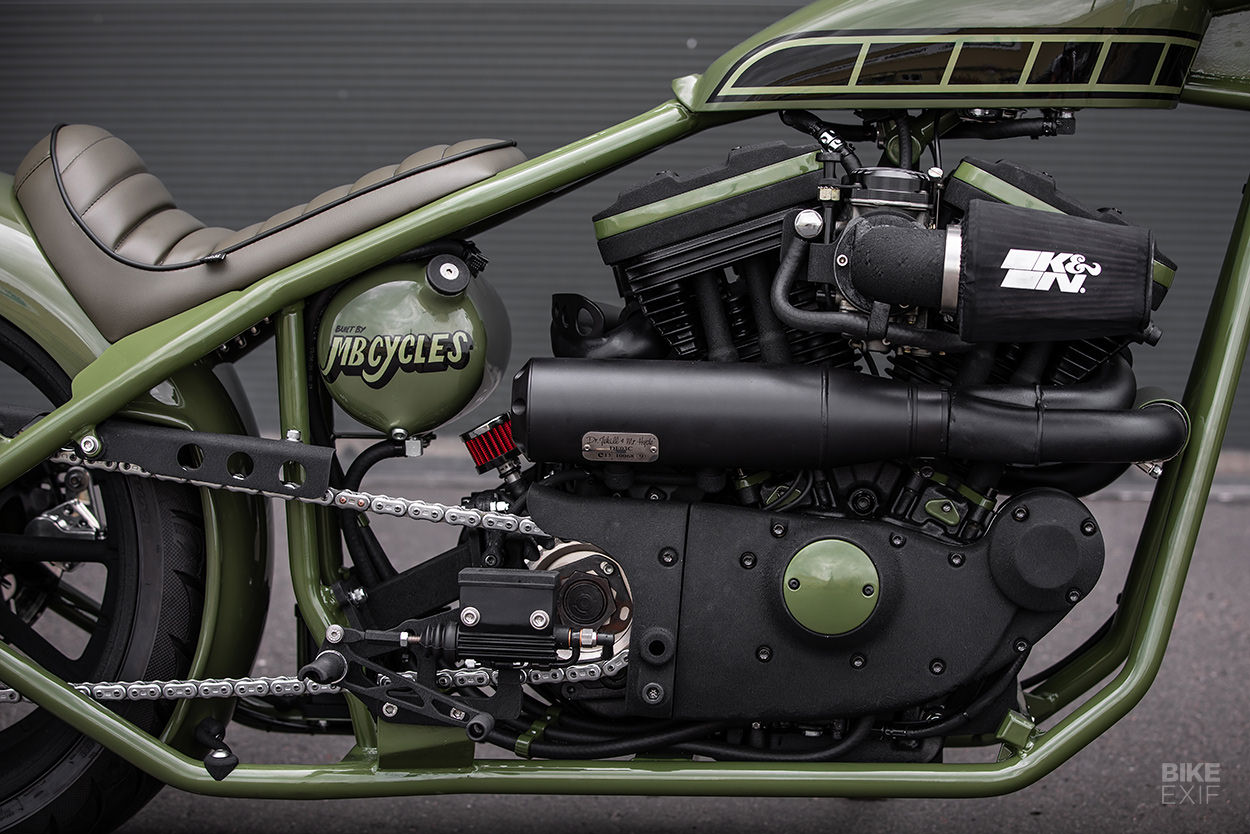 The motor was left alone inside, but it was yanked out of the bike and given a fresh coat of wrinkle black. Martin put it back with a Keihin CV carb and a K&N filter, a Dyna S single fire ignition, and coils from S&S Cycle. Then he fabricated new exhaust headers, and installed a Dr. Jekill & Mr Hyde muffler that has an electronically controlled valve to change its loudness.

Moving to the chassis, Martin lowered the original Buell front forks by two inches, then had the stanchions covered in a low-friction, diamond-like carbon coating. 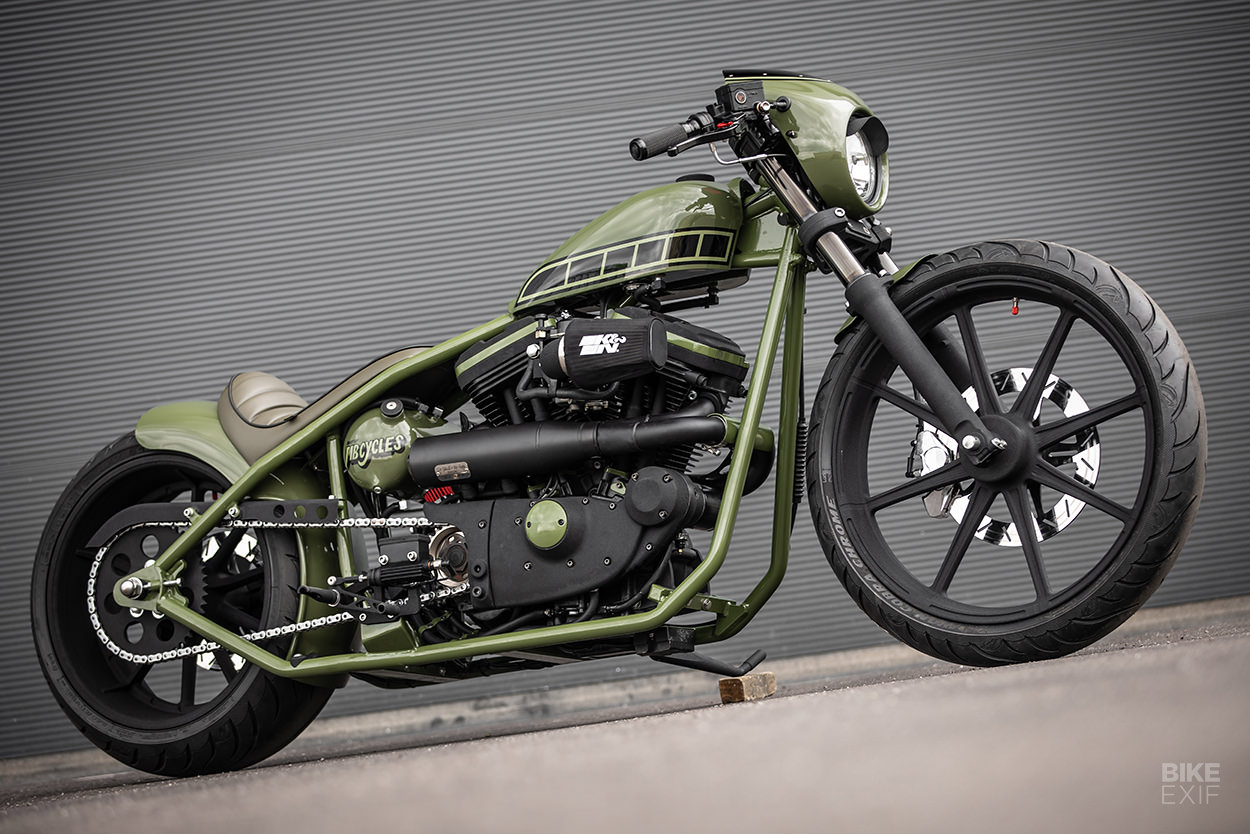 The wheels look like a matching pair, but they actually come from two different sources. The front wheel is a 3.5×21” Rev Tech part, and the back is an 8×18” hoop from a Harley-Davidson Breakout. They’re both wrapped in Avon Cobra Chrome rubber, with an ultra-wide 240 tire out back.

Martin mix-‘n-matched the brakes too, with a four-piston Beringer caliper up front, and a two-piston Performance Machine unit out back. Both calipers wear a polished finish, and are matched to Rick’s discs. 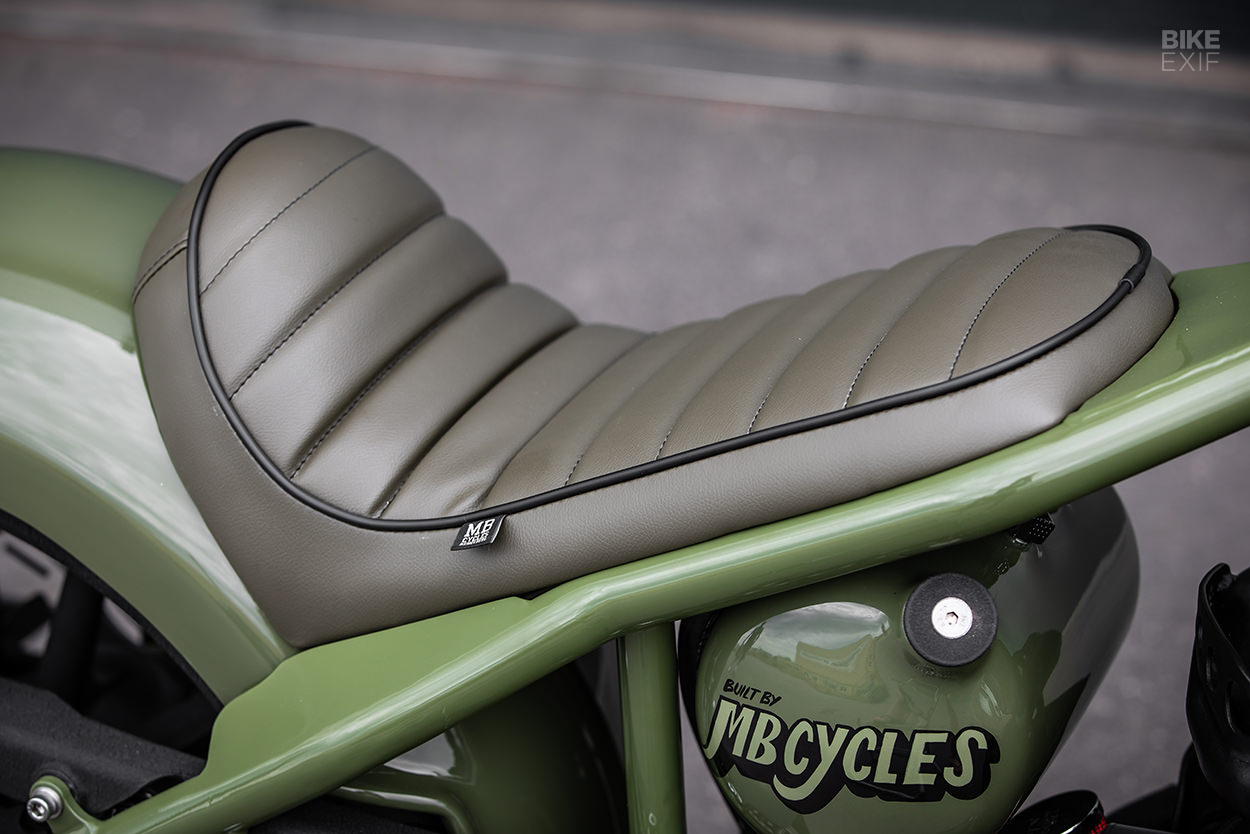 For the bodywork, Martin imported a gas tank from Japan and modified it with an external ‘gauge.’ There’s a modified Harley V-Rod nose fairing up front, wrapped around a 4.5” headlight. The fenders and the aluminum oil tank are custom made, as is the seat, which is covered in a German military leather.

There’s a pair of Kellermann LED turn signals on the fairing, and an LED taillight and turn signals embedded in the lip of the rear fender. The license plate sits on an aftermarket mounting bracket, off to the left side of the axle. 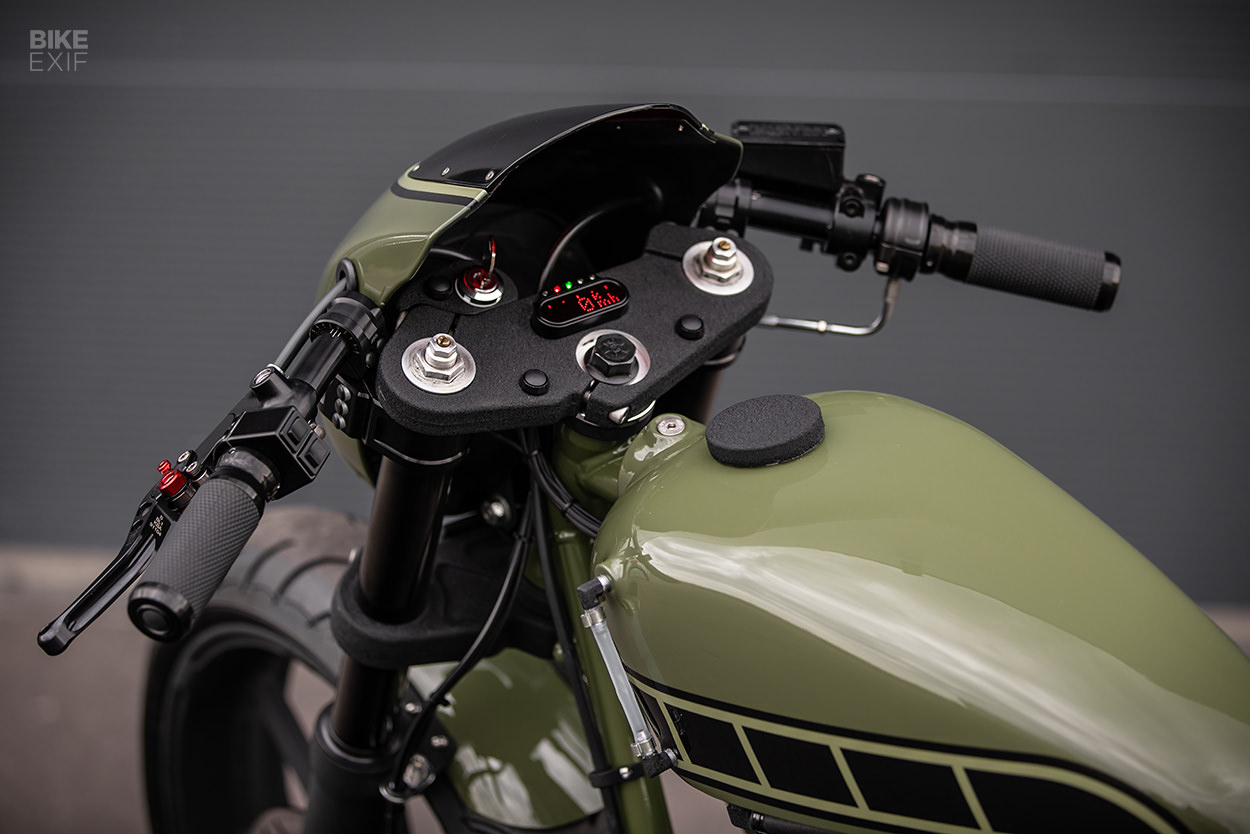 Behind the fairing are a tiny Motogadget speedo, ABM clip-ons, and ABM levers matched to the OEM Buell controls. The switchgear is minimal; a couple of mini-switches on the left, and a pair of push buttons embedded in the top yoke.

Other add-ons include modified LSL foot pegs, a Kustom Tech side stand, and a Lithium-ion battery from Antigravity. But it’s the little custom touches that hit hard—like the nifty lower rear fender mounts, or Martin’s penchant for meticulously tidy cable routing. 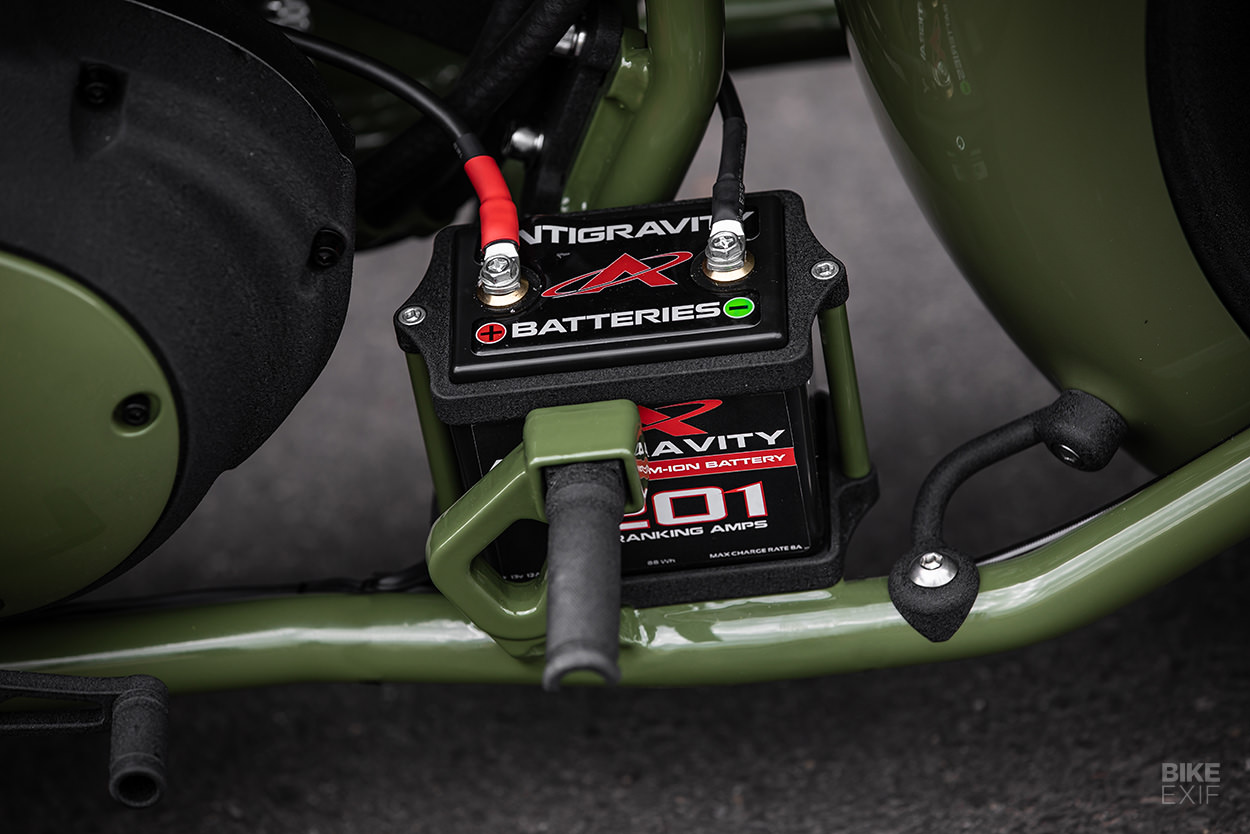 Sebastian really had no idea what direction Martin would head in with the build—not even when it came to paint. “Absolutely crazy,” says Martin, “but the best way for me to build a bike. And also a great confidence in me and my work.”

Martin settled on subdued tones, with a cheeky nod to 80s Yamahas in the graphics. Chikos Pinstriping painted the tank, while Metal Skin Works powder coated everything else in either olive, or wrinkle black. 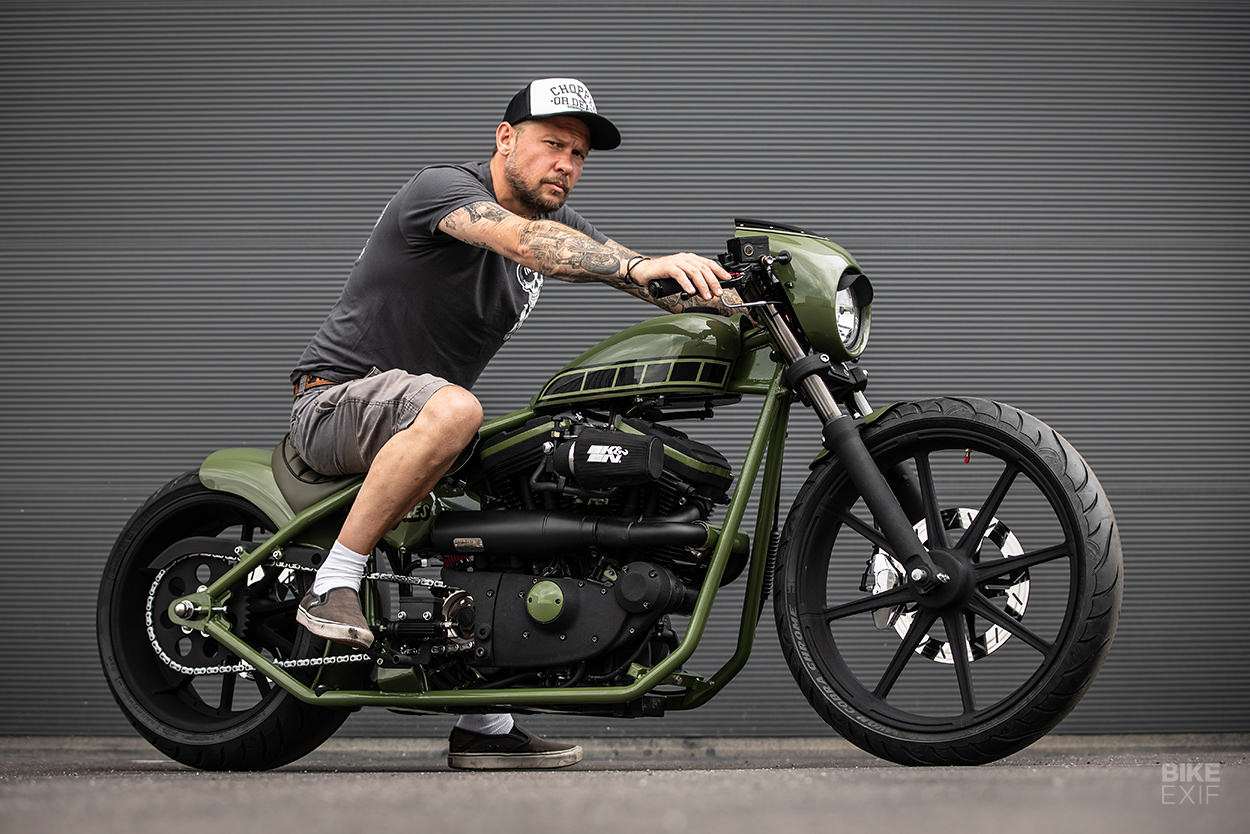 It might be more stretched and slammed than we’re used to, but Martin’s Buell-powered hardtail still hits all the right notes. Sebastian’s happy too… but his girlfriend isn’t. “She said she needs another bike build from me that looks more tough and crazy than Sebastian’s,” quips Martin.

“I’m already working on it.” 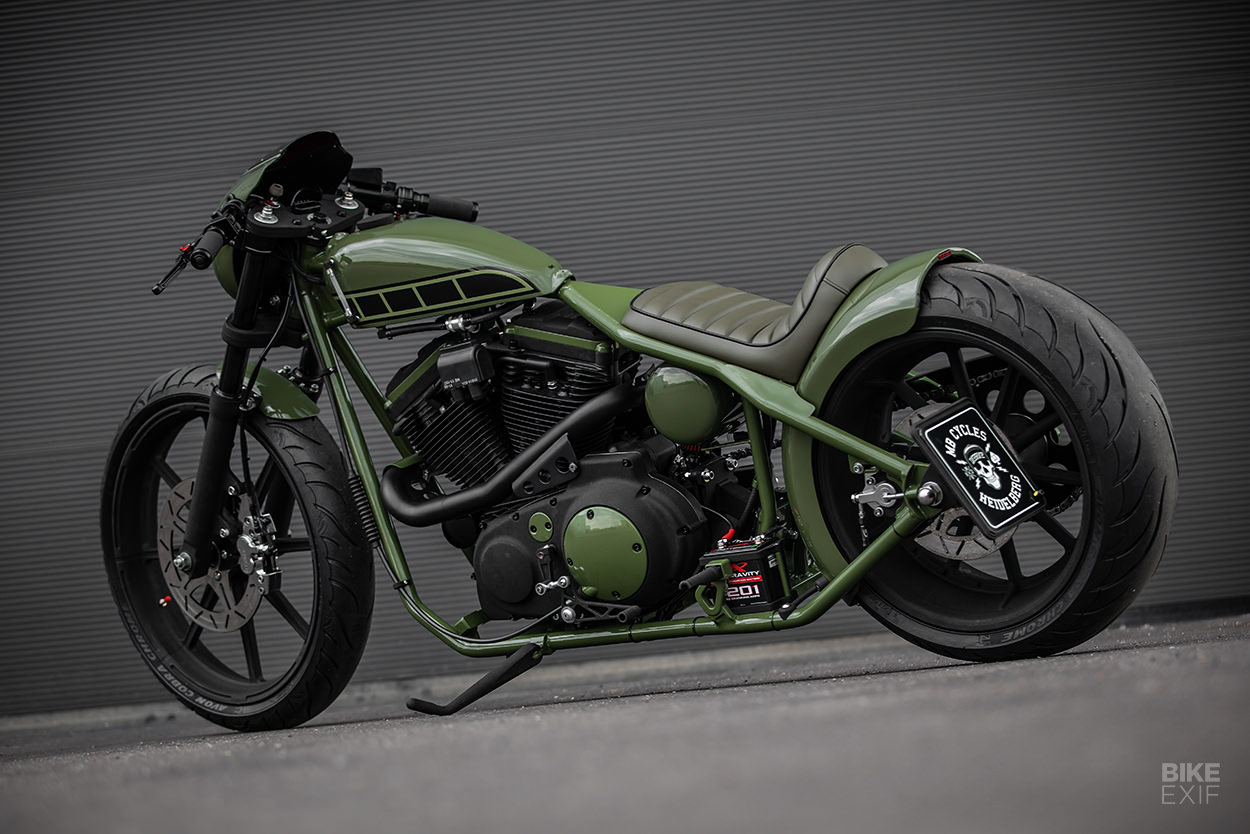