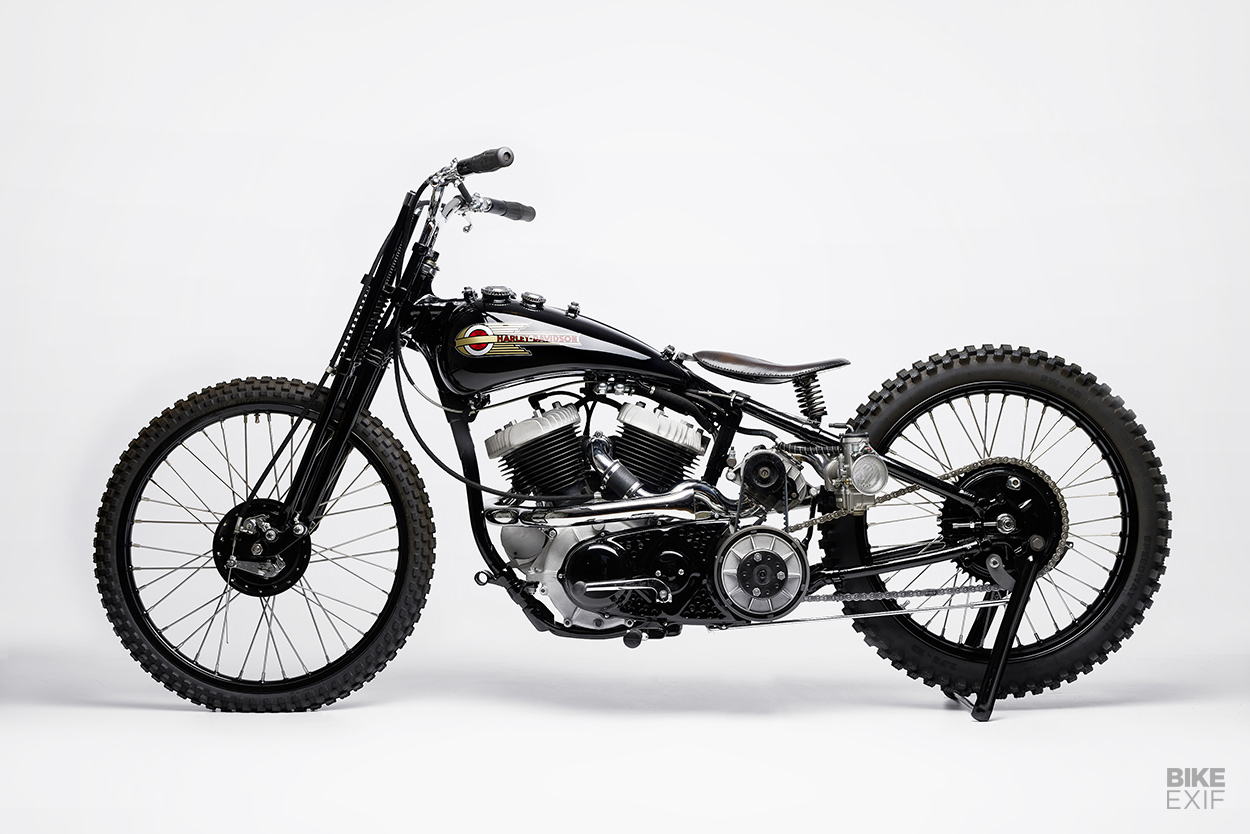 Uwe Ehinger describes himself as a ‘motorcycle archaeologist,’ and the description is apt. He knows where to find the most obscure parts, and he knows which parts are worth finding.

His motorcycles are always imbued with history, using vintage components in unusual yet appropriate ways. This flathead is the perfect example: it’s an odd amalgam of pre-War Harley bits, but somehow it makes sense. 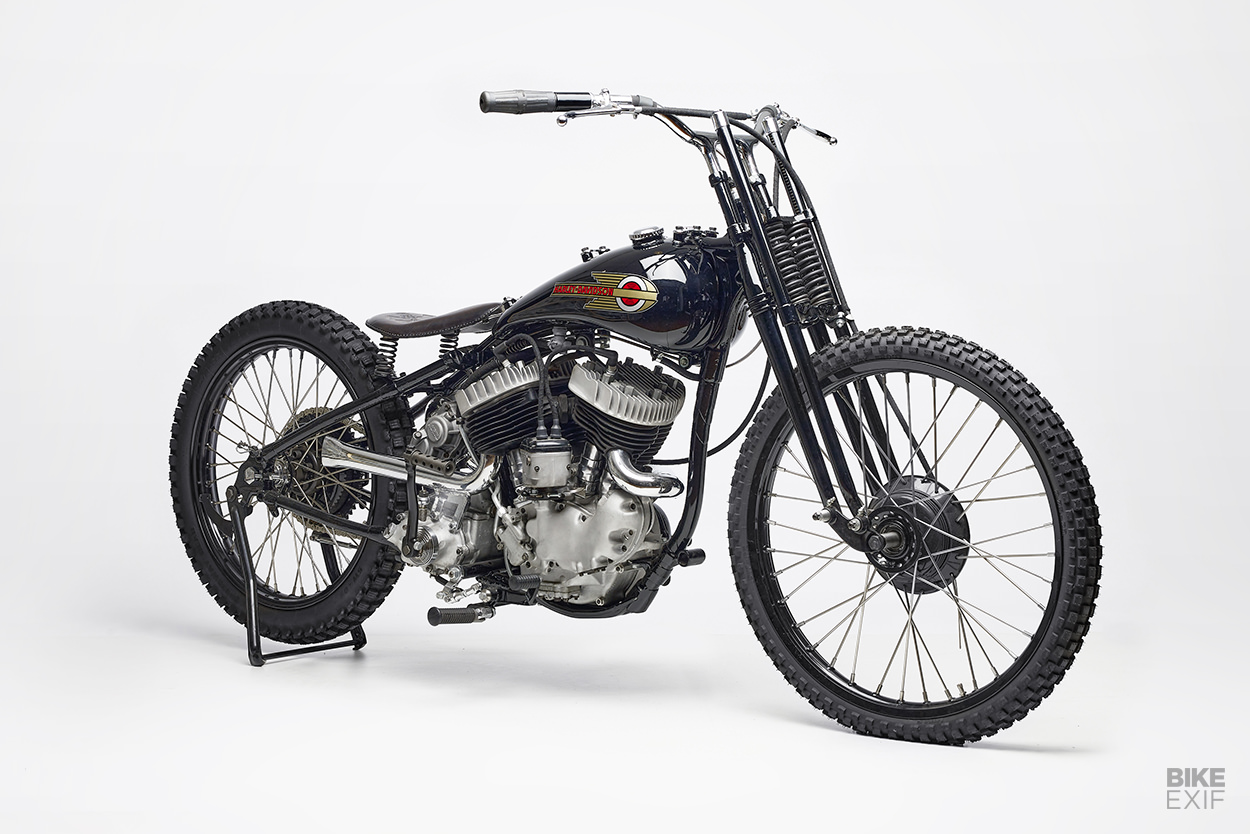 Uwe runs the Ehinger Kraftrad studio with his partner, the designer Katrin Oeding. They’re based in Hamburg, Germany, but focus on machinery from Milwaukee.

This bike is a personal project for Uwe, who has always wanted to build a dirt track bike for himself. The core of the machine is a 1937 ULH big twin, which means it’s a high-compression version of the regular side-valve flathead. 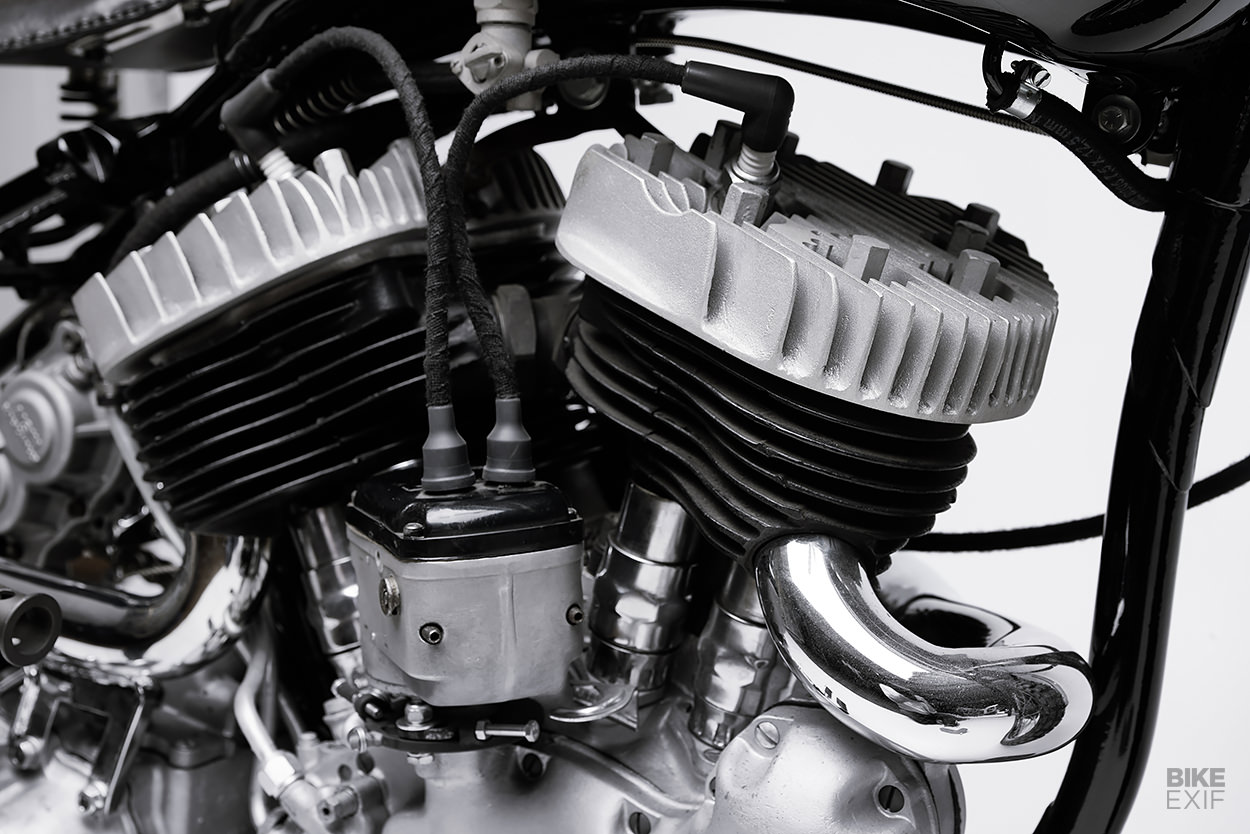 This particular 80ci (1340cc) unit has earlier VLH-spec cylinders sandwiched between the cases and heads, though—a tweak that reveals Uwe’s attention to detail. 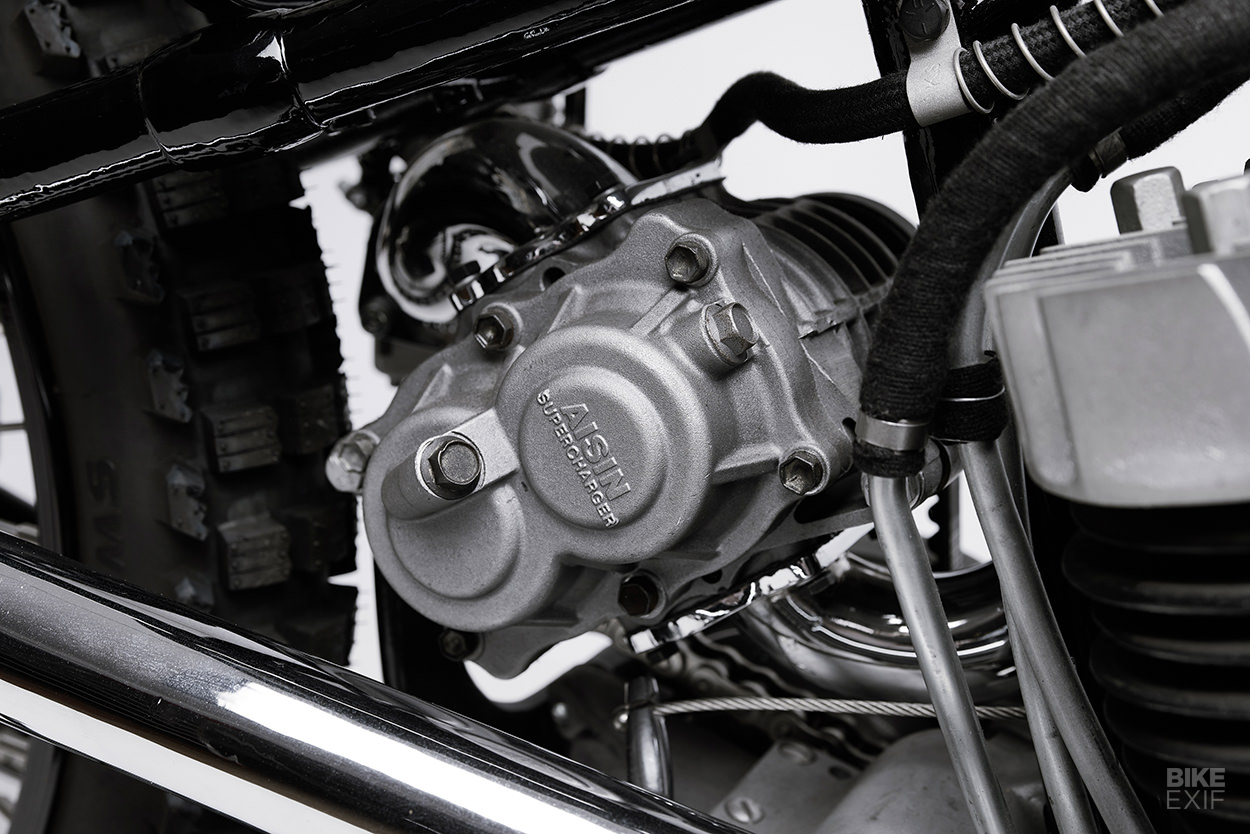 Uwe has used the interchangeability of the parts to build the best possible engine, but he hasn’t stopped there. He’s added a more noticeable modification—an Aisin AMR 300 supercharger. It sits right behind the rear cylinder, filling out the triangle of the hardtail frame nicely.

These roots-type units are commonly found on tiny Japanese kei cars, and they’re about the size of three soda cans. Uwe located a secondhand unit and rebuilt it with new bearings; it offers a low but useful dose of boost without causing maintenance or reliability issues. 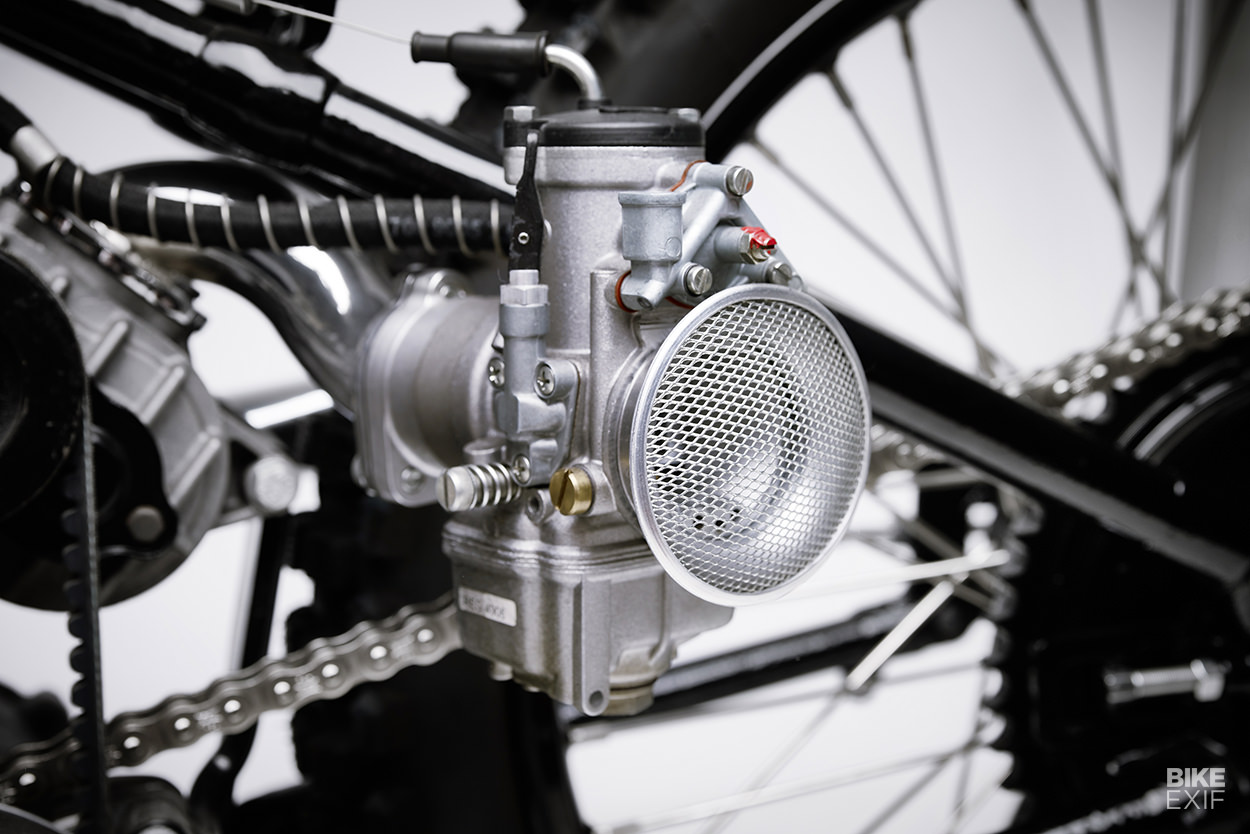 As with most vintage machinery, the whole setup is relatively simple: Uwe tells us that he can switch from flathead to knucklehead power in about 20 minutes if he wants to! 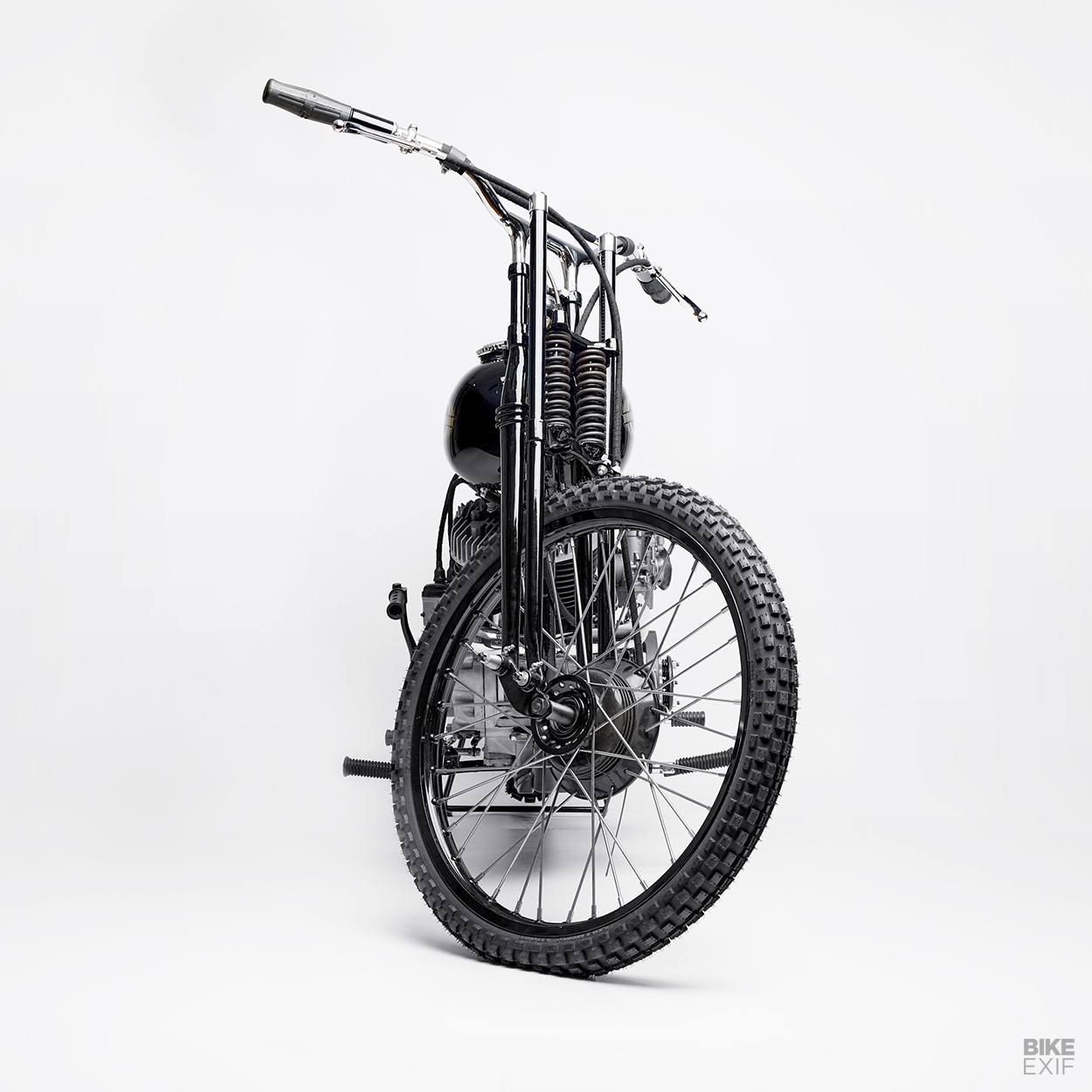 The springer front end is from an even earlier vintage: it left the factory in 1927 as part of a Harley JD and has been restored and modified to fit the VL frame. It’s fair to assume that there is no three-way adjustability on this elegant apparatus, but it certainly looks the part.

Uwe has cleverly integrated the drum brake from a forty-year-old Honda XR500R enduro bike. (Incidentally, like this build, the XR sported a 23-inch front rim.) 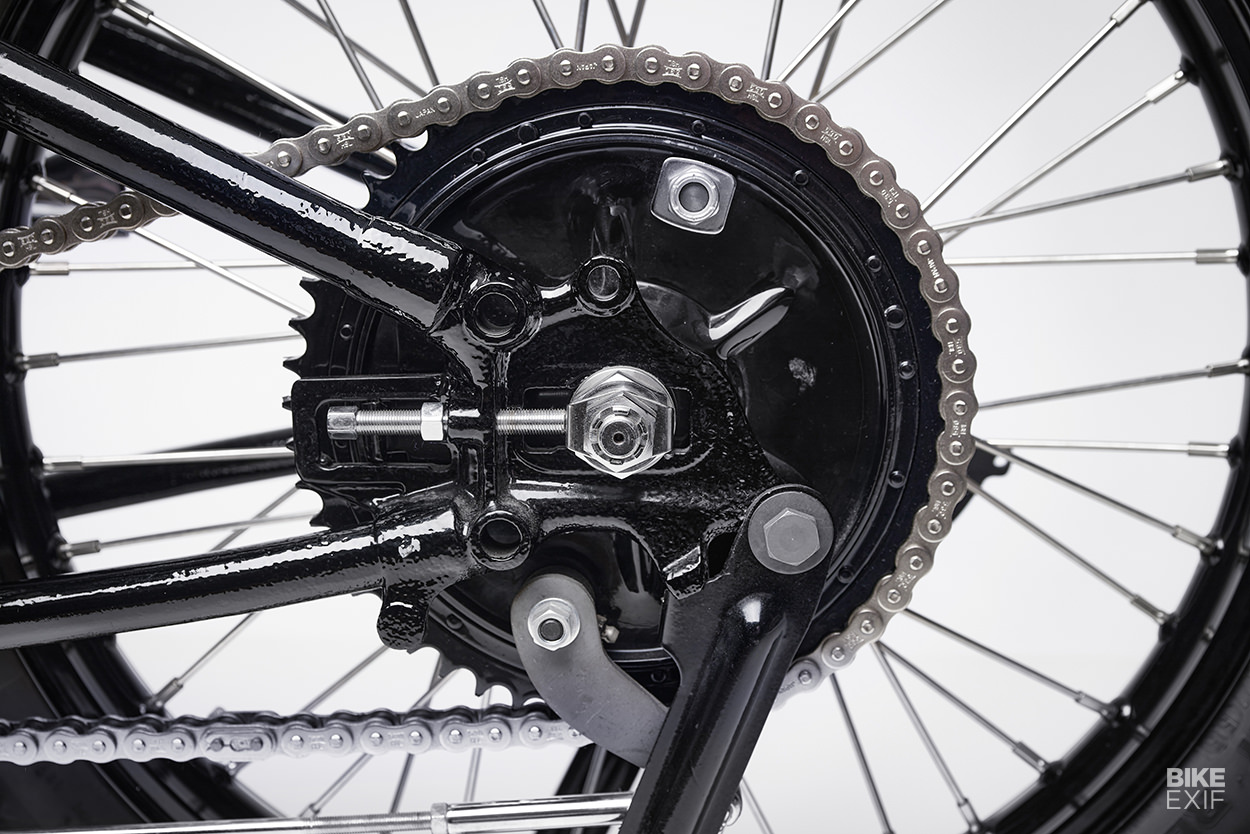 The back wheel is only slightly smaller at 22 inches, so lean angle is not going to be a problem on this Harley. Both rims are old speedway stock, with modified lacing to match the drum brakes. The brake at the back is a 1937 Milwaukee design.

Virtually everything else is custom made, including the gas tank, which Uwe hammered out from steel. It’s a completely custom design, but follows the traditional teardrop shape and retains separate chambers for gas and oil—plus clearance for quick engine swaps. 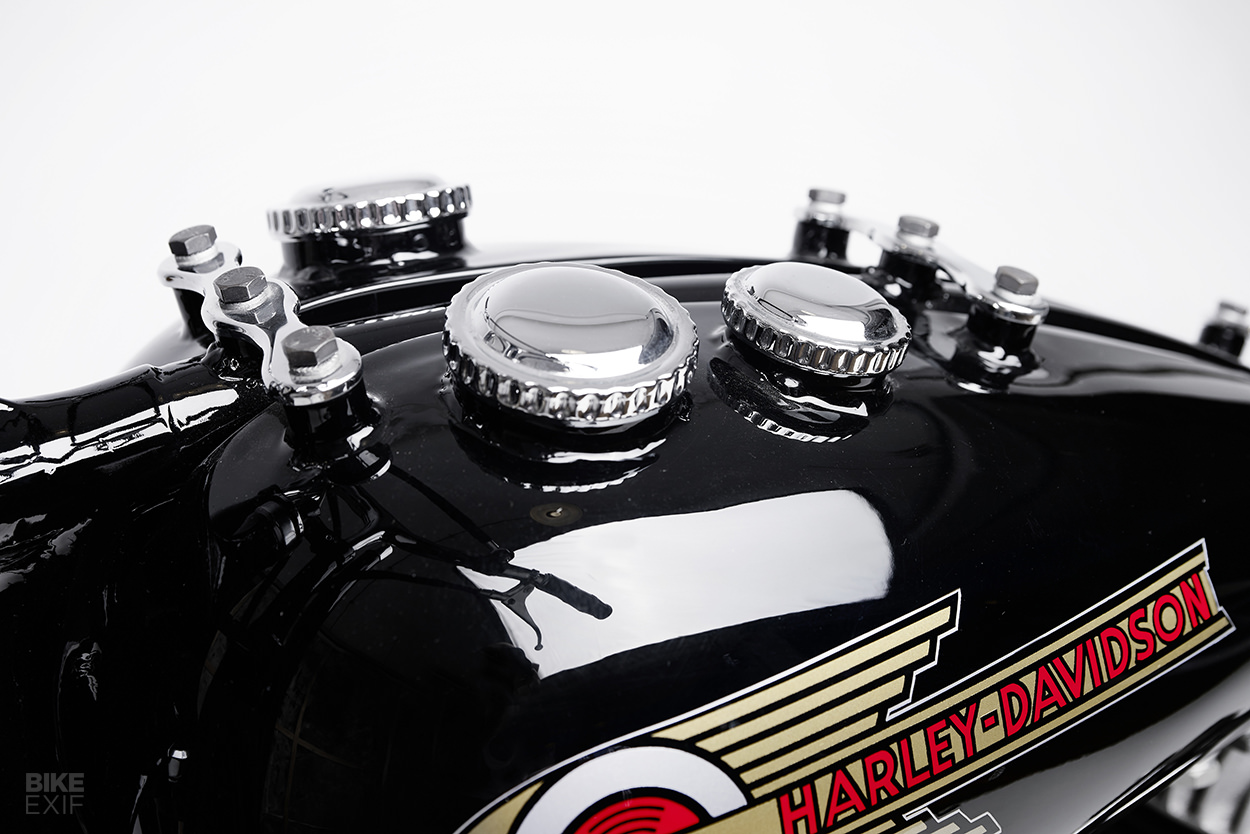 Perched atop the hardtail frame is a one-off seat, with substantial springs to provide posterior support. In a previous life, the springs cushioned the valves in an Evo engine.

After adding period-correct controls, Uwe had a rideable bike, and it looks like nothing else we’ve seen. The question is, where can he ride it? “I would love to get a simple road permit for it, or ride it in one of the beach races—the Rømø Motor Festival [Denmark] or the Race Of Gentlemen [New Jersey], for example.” 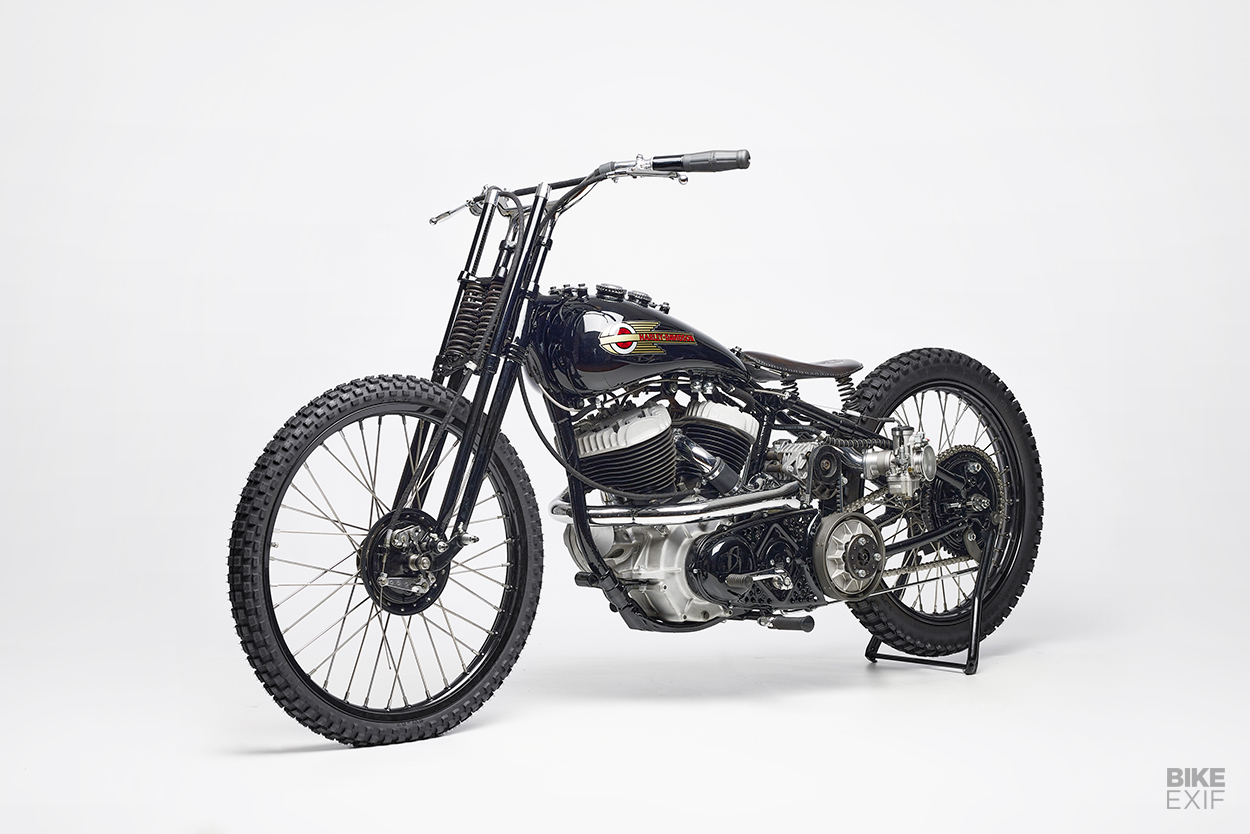 And what an incredible sight and sound that would be: the rumble of a classic big twin, mixed with the whine of a supercharger. It’d make it worthwhile having to clean all the sand off afterwards… 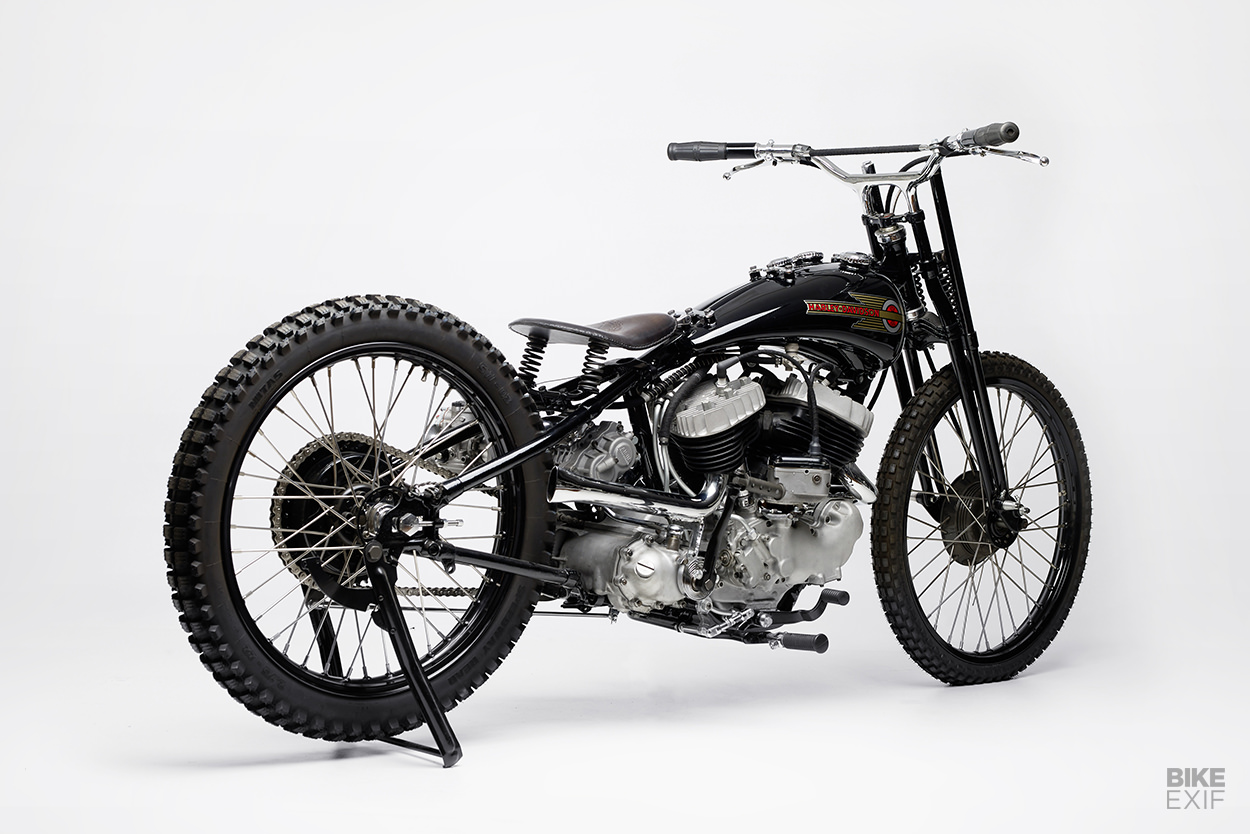