La Vita in Verde: An Aermacchi 250 restomod from Austria 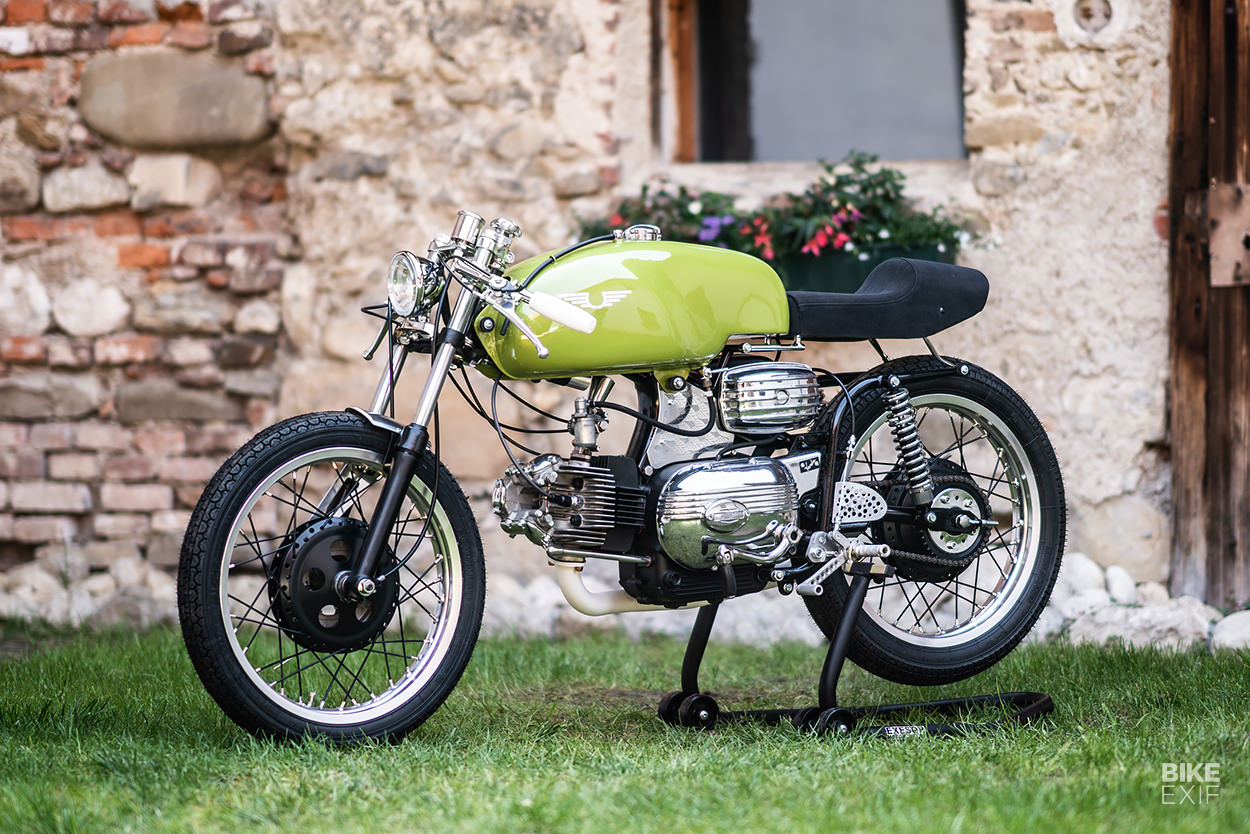 Italy boasts some of the most storied marques in motorcycling, many of which are still prolific today. But the annals of Italian motorcycle history are also littered with companies that didn’t quite stand the test of time—like Aermacchi.

If you don’t know the story yet, Aermacchi was an aircraft manufacturer that started producing motorcycles after World War II. US readers will know the name, because Harley-Davidson bought half of the company in 1960, and started selling rebadged Aermacchis stateside. You’re looking at a 1961 Aermacchi Harley-Davidson 250 Sprint, masterfully reworked by Christian Schwarzenlander at ExesoR Motorcycles in Austria. 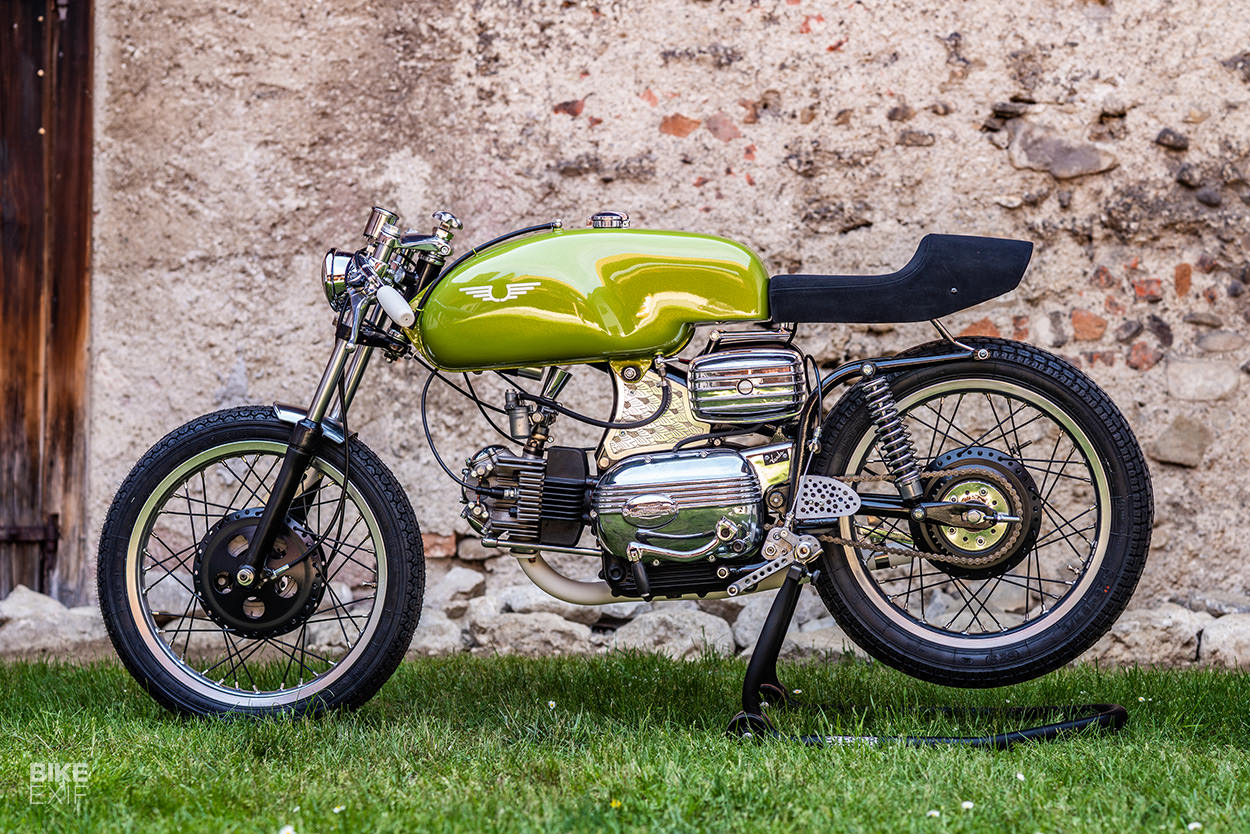 Christian picked the Aermacchi 250 for this restomod project, specifically because he’d been itching to do something with a rare Italian classic. “The style of the 60s single engines and the pure design of this era is unmistakable,” he tells us. “I always played with the thought of one day building an Aermacchi.”

“But it is getting harder and harder to find an affordable Aermacchi nowadays. Some of them have been modified as classic race bikes, and some of them stand fully restored in private collections.” 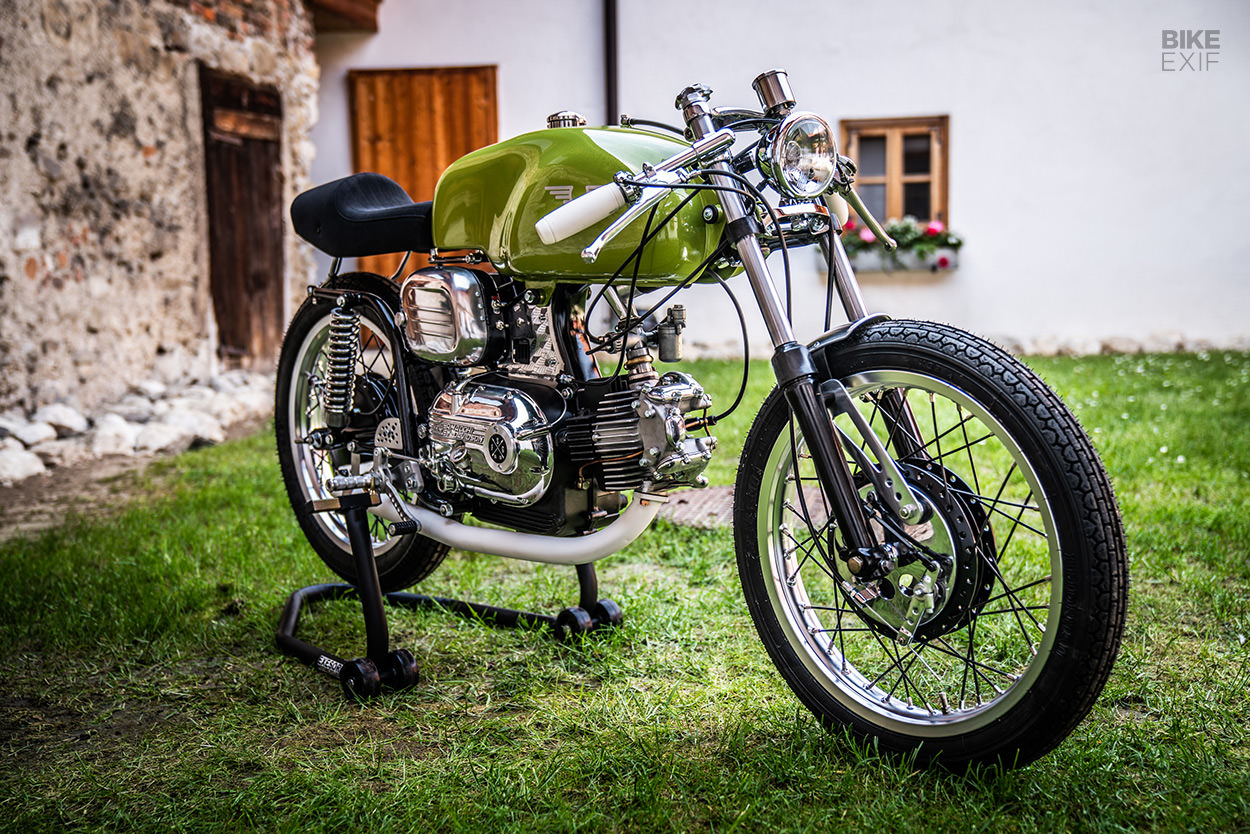 Christian scoured the internet and stumbled across the 1961 250 Sprint by chance. It was in a terrible state and the price was far too high, but since they’re so hard to track down, he bought it.

Luckily there was a client funding the project; unusual, since Christian usually prefers working on bikes just for himself. It helped that the client was also an old friend—and that he gave Christian the freedom to do whatever he wanted with the Aermacchi 250. And we’re glad he did, because the end result nails that elusive balance between classic restoration and tasteful customization. 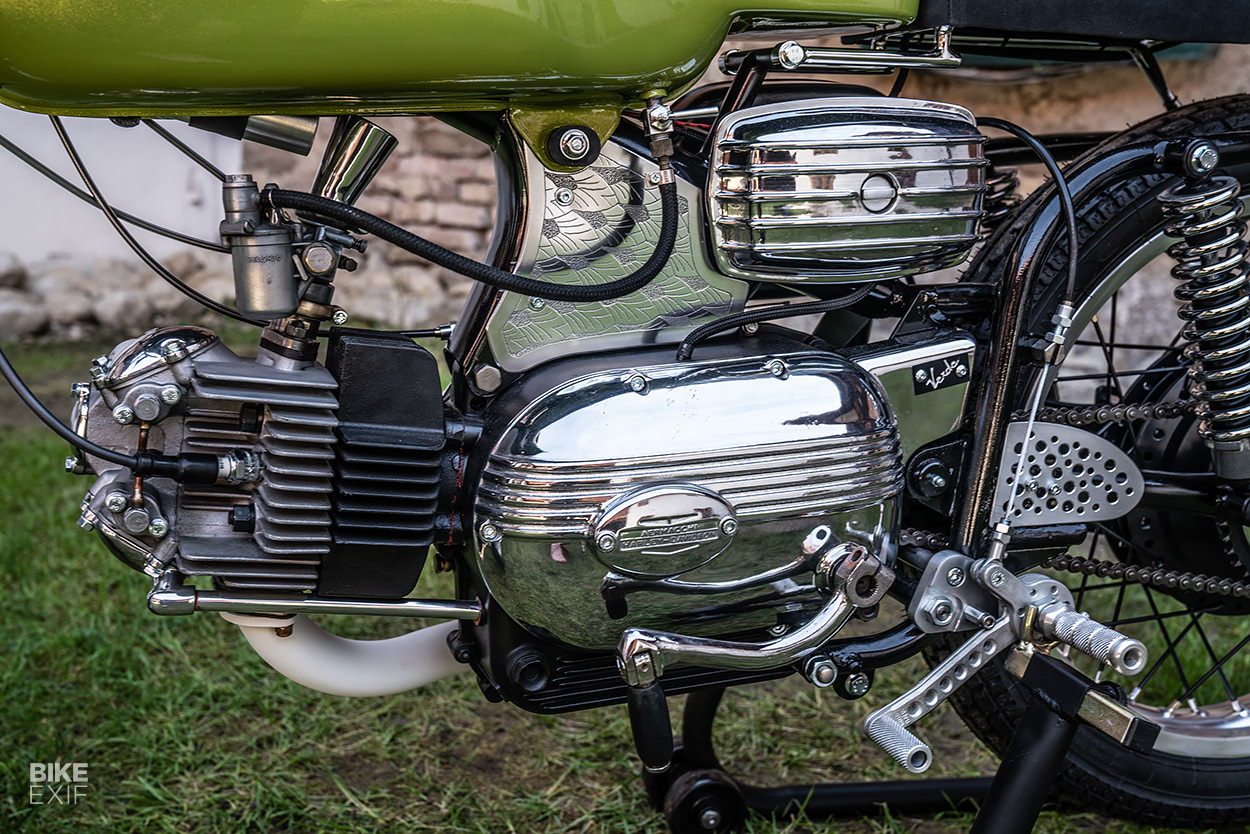 The first job was to bring the ratty donor’s engine back to life. That was done within three hours, leaving Christian very optimistic about the rest of the project. But as it turns out, the single cylinder power plant was one of only a few parts on the bike that was in usable condition.

And that’s not saying much either; Christian had to do a full top end rebuild, because “some idiot drilled holes through the exhaust port and replaced the header bolts with wood screws.” 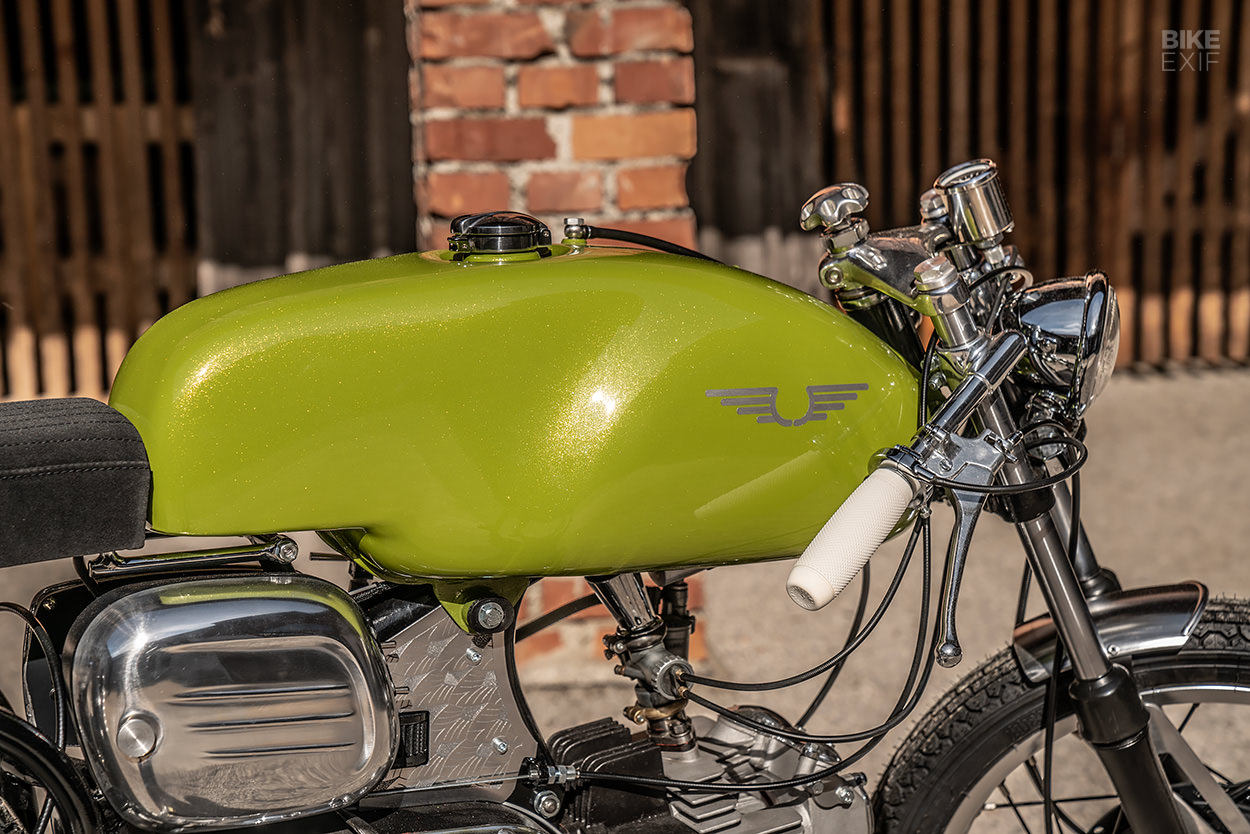 There was more resto work lurking elsewhere. The frame needed a solid amount of grinding and sand blasting before it could be repainted. And the OEM fuel tank, a part that Christian was insistent on retaining, was almost too far gone.

“It was catastrophic,” he says. “After I removed three layers of paint and several millimeters of filler I saw the disaster: big dents on ever side. After welding in a new filler neck for a Monza-style filler cap I took the tank to my friend at I-Flow to prepare the tank and do the paint job.” 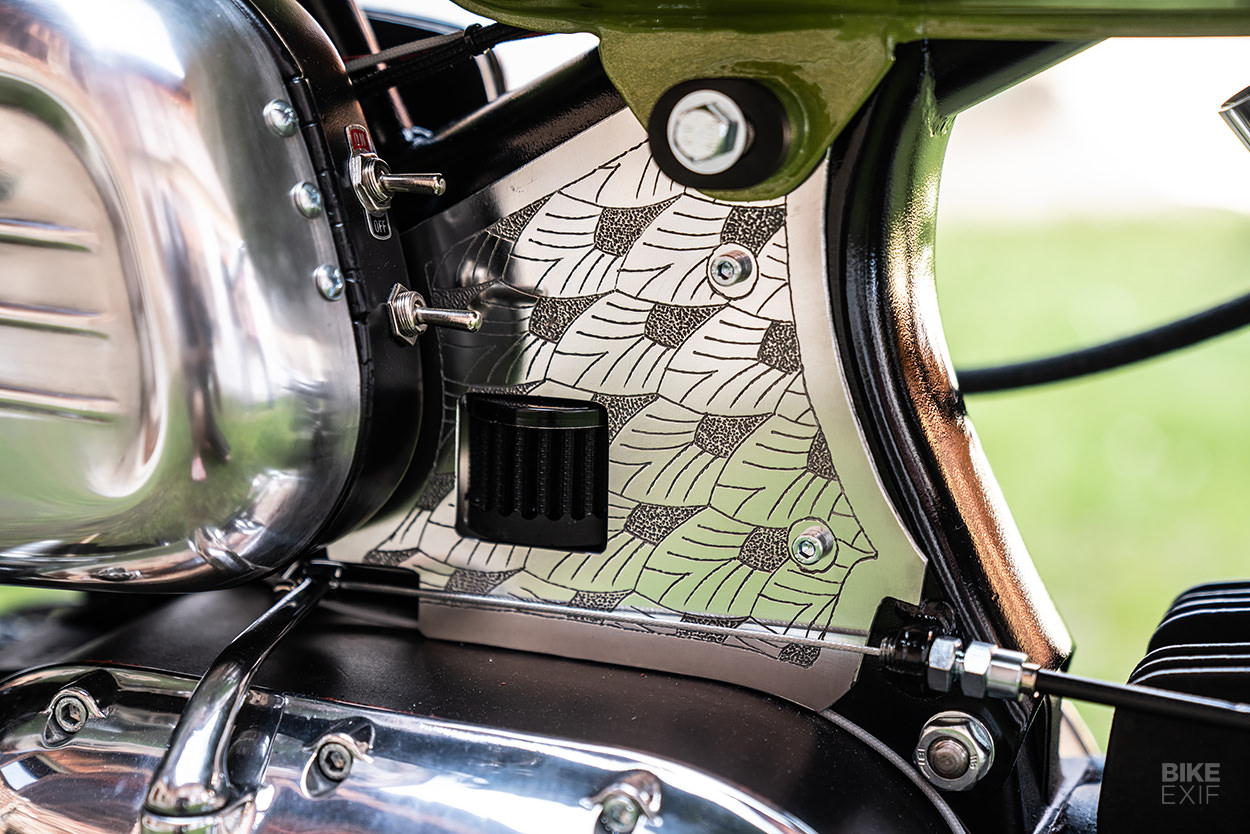 There was not much to work with on the original seat either, so Christian repaired the seat pan, shaped new foam and had it covered in suede. It’s attached to the bike via a stunning hand-made stainless steel subframe.

Smaller bodywork items that could be rescued were cleaned up. But other parts were rusted beyond redemption, and had to be reproduced—like the quirky engraved aluminum frame blank-off plates. Christian also commissioned master fabricator, Bernhard ‘Blechmann’ Naumann, to build a new cover for the electrics box on the right side of the bike. 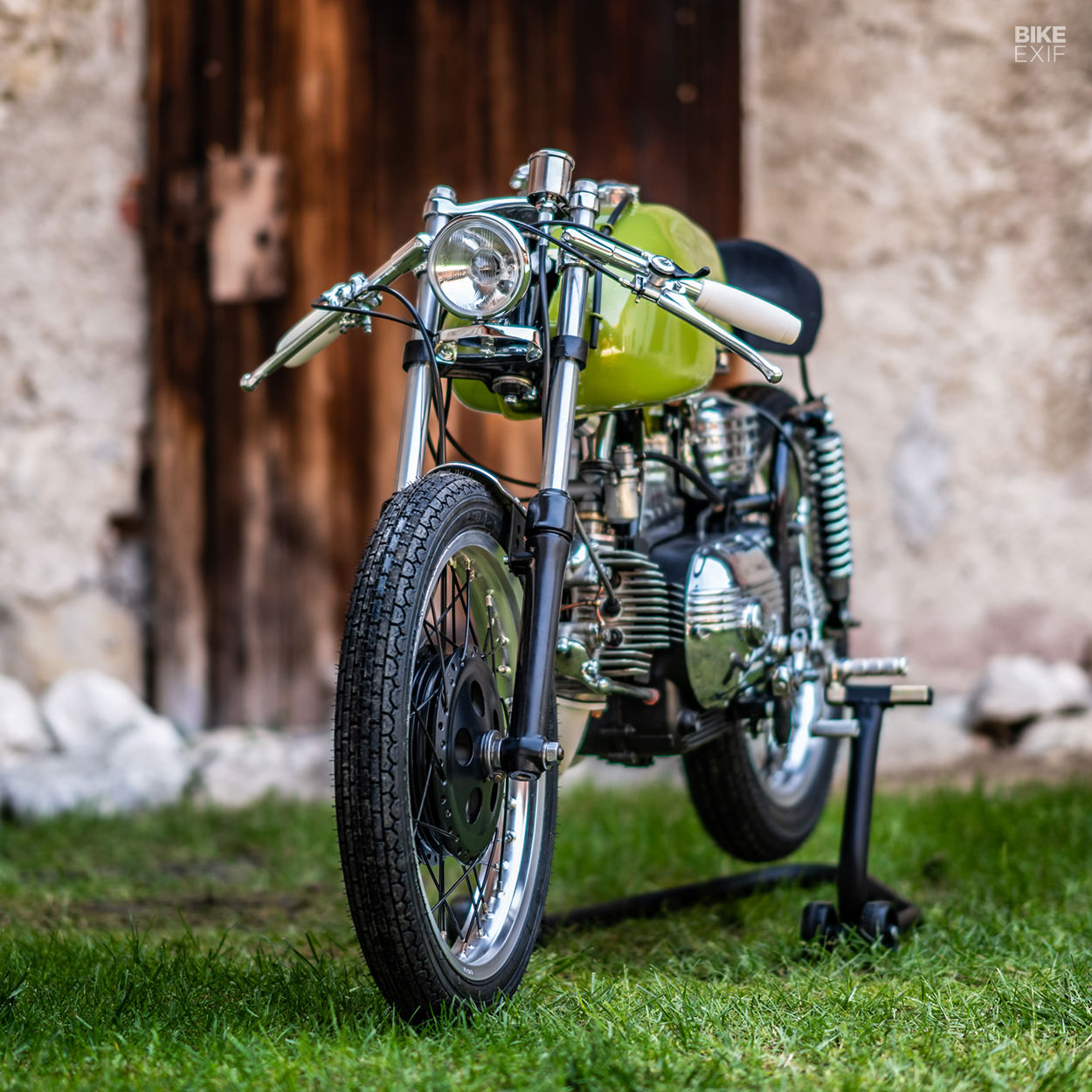 Christian also re-laced the stock hubs to new 18” shouldered aluminum rims, wrapping them in fresh Heidenau rubber. The front forks were stripped and refurbished, while the rear shocks were swapped out for a set of aftermarket units.

Up in the cockpit are a set of clip-ons that came with the bike, along with a new headlight, speedo and grips. Lower down, Christian restored the original exhaust header, and fitted it with an internal dB killer. 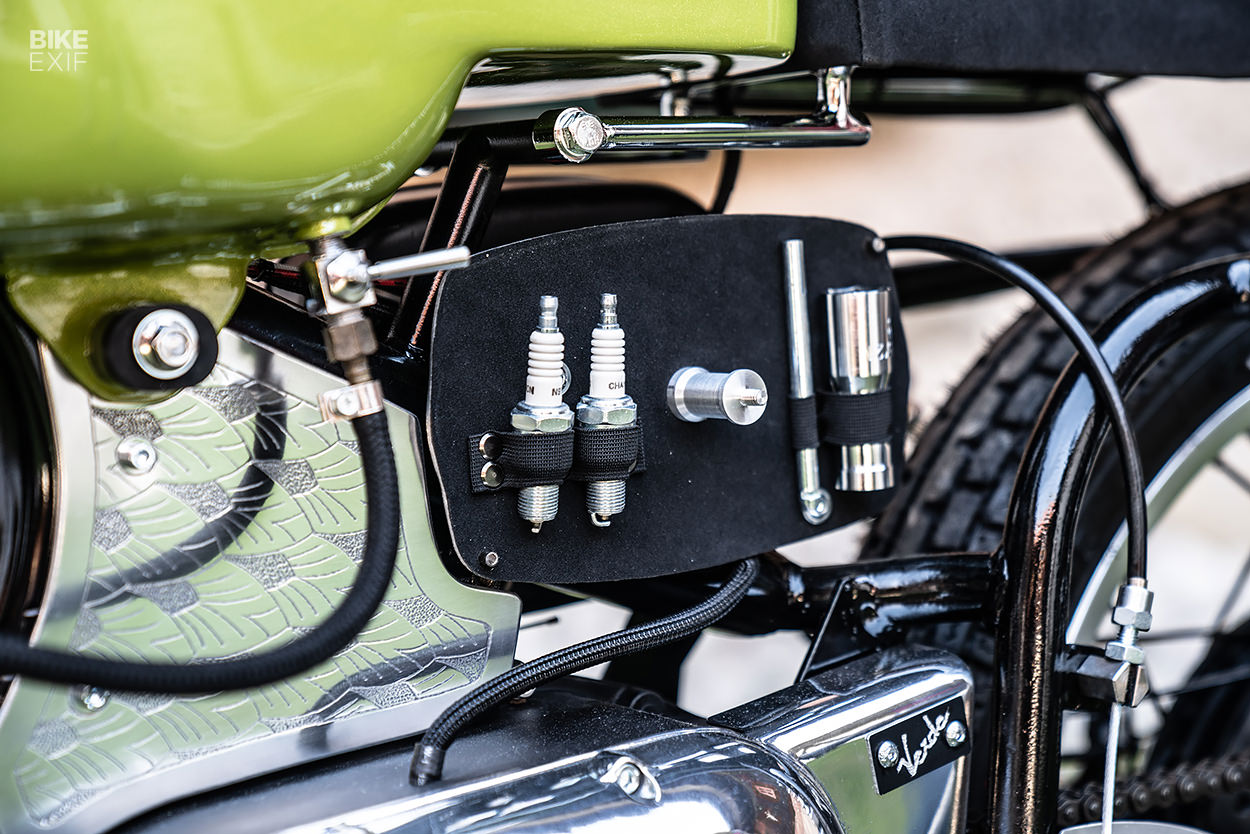 Small thoughtful details abound on this charming Aermacchi. There’s a little tool box on the left side of the bike, made with the modified valve cover from an old Dnepr. And the bike is sprinkled with drilled details and subtle custom touches.

“Many parts could not be saved,” says Christian. “In total more than 50 parts were custom made, and more than 20 original parts were modified.” 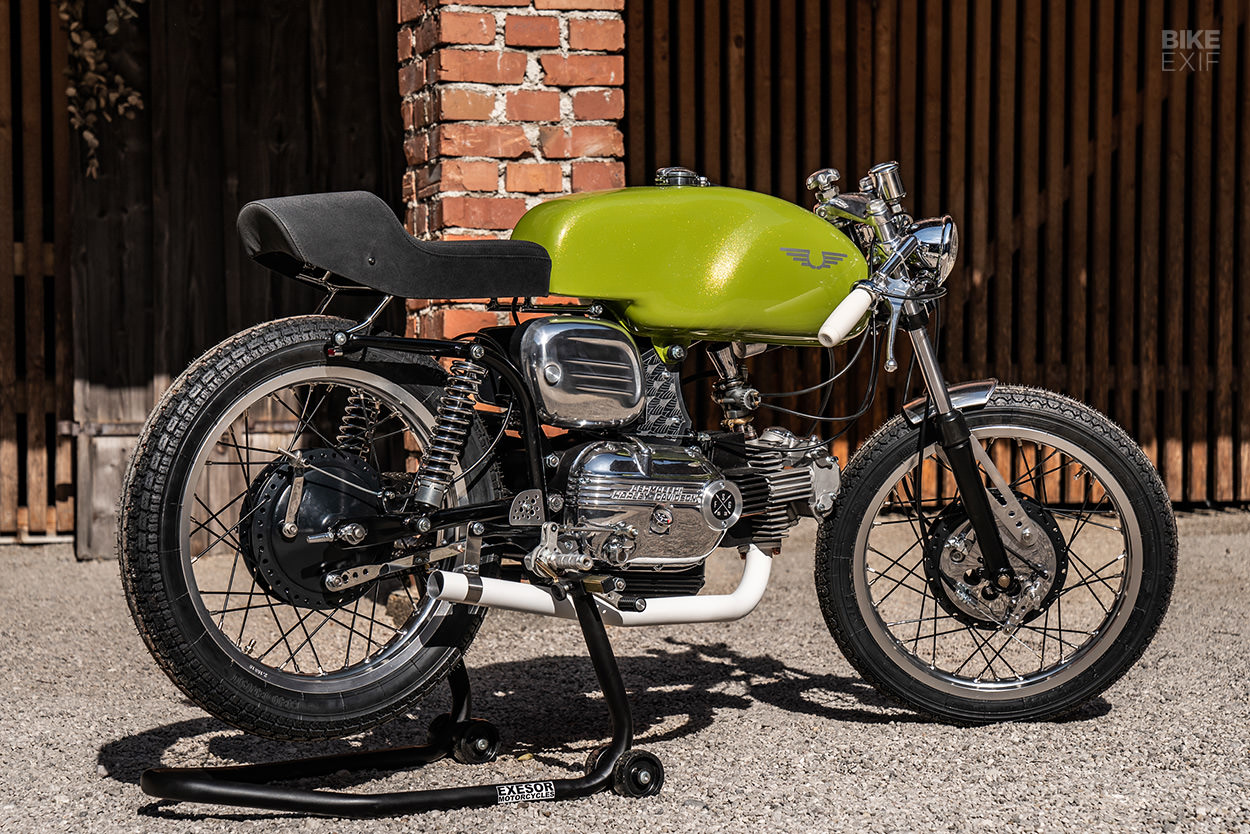 It took Christian 250 hours, spread out over 13 months, to button this one up. But the hard graft was clearly worth it. Resplendent in a lush green paint job that’s earned it the moniker ‘Verde,’ it’s about as cute as rare Italian classics get. 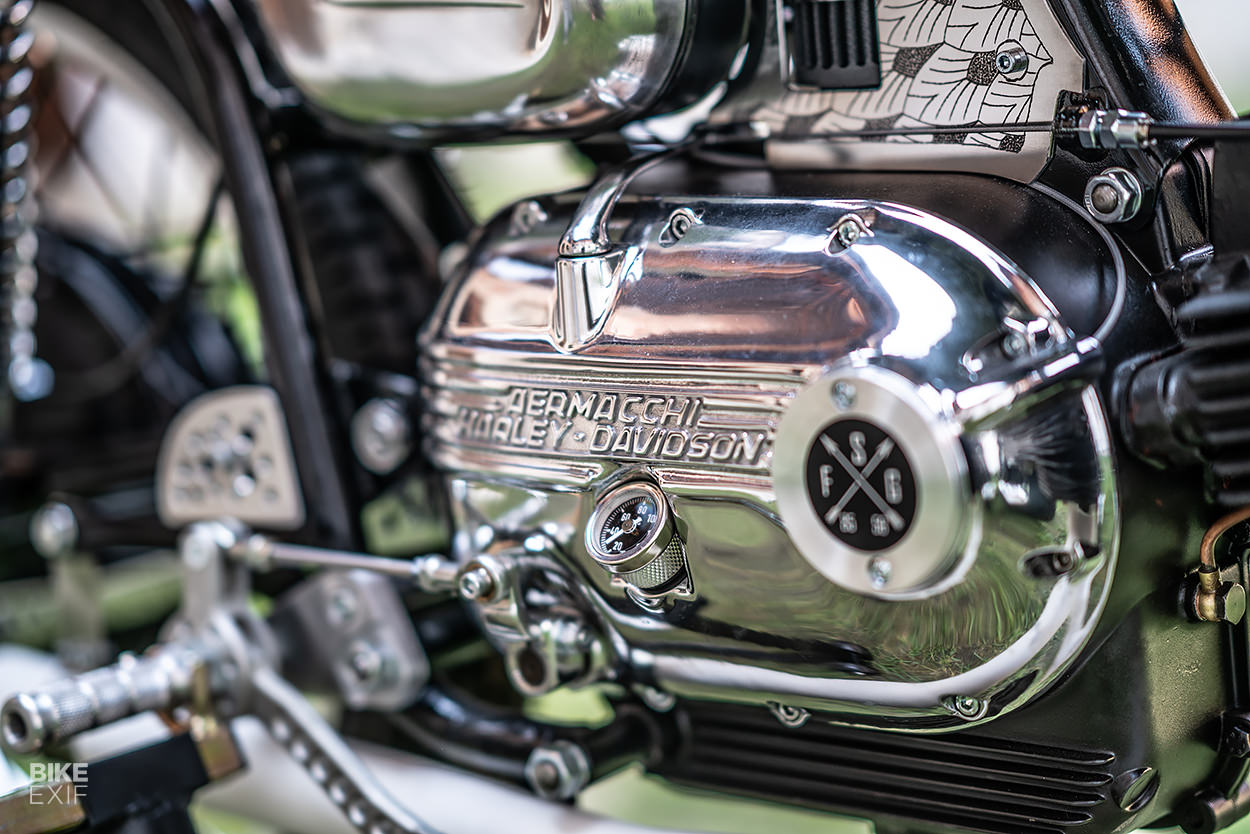