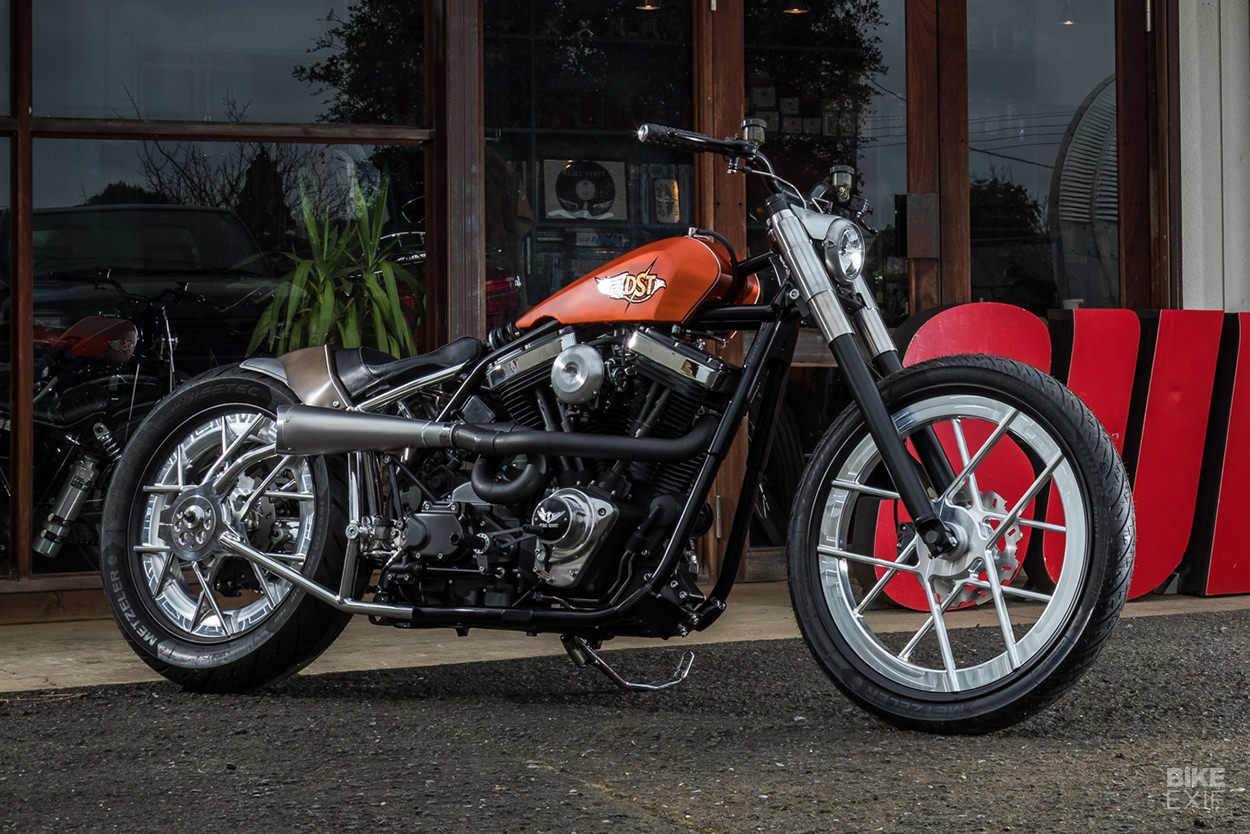 The most prestigious custom event in Japan is the Yokohama Hot Rod Custom Show, better known as Mooneyes. If you pick up a trophy there, it means you’re at the top of your game. And at the most recent show, the top award went to Takuya Aikawa of Sureshot for this skinny Dyna Low Rider.

This is not the first time Aikawa has enjoyed a short walk and a handshake at Mooneyes. He took out the ‘Best of Show’ award in 2019 with a 1968 Shovelhead—a very different build to this 1997 FXDL. 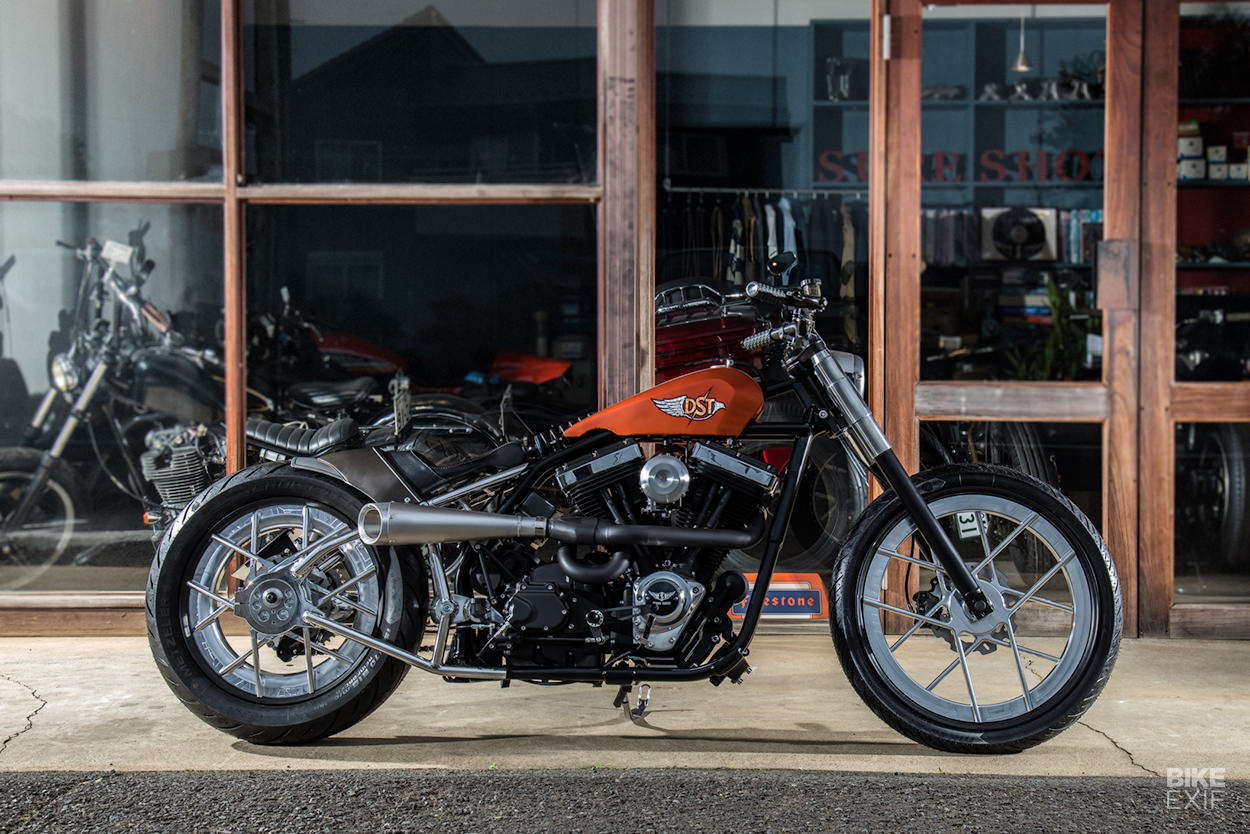 Aikawa has been running Sureshot since 2003, and is based in Chiba, just to the east of downtown Tokyo.

“Slender and skinny customs are the style of my shop,” he tells us. “I wanted to make a slender Softail-style frame for this machine, based on the Dyna frame with the evolution engine.” 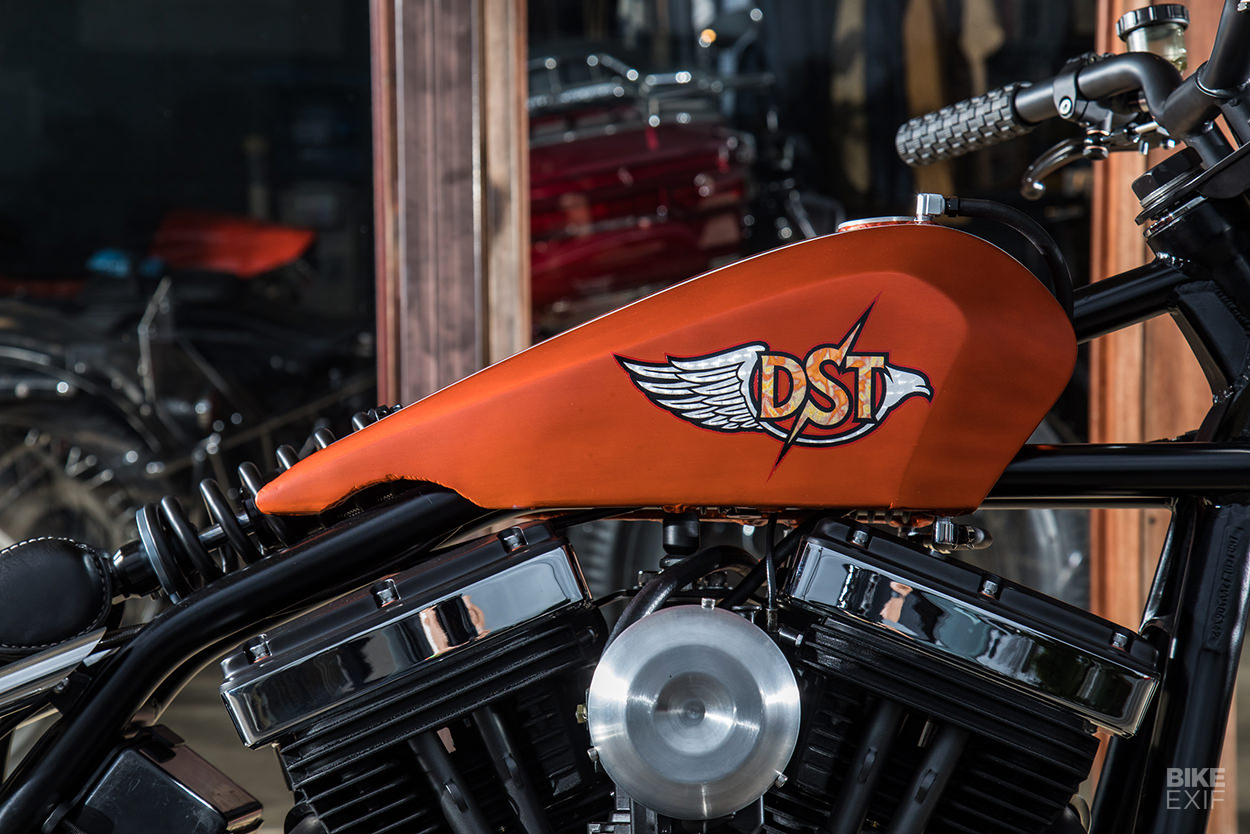 He’s called this machine ‘DST’—an amalgam of Dyna and Softail. But turning the concept into reality was easier said than done, because it meant changing the twin rear shocks to to a monoshock setup, and installing a cantilever swing arm.

Aikawa-san first considered the structure of the frame. “I was pondering how to create a beautiful silhouette like, a rigid frame chopper,” he says. “I wanted to recreate the beautiful triangle that stretches from the neck to the axle shaft, on a bike with suspension.” 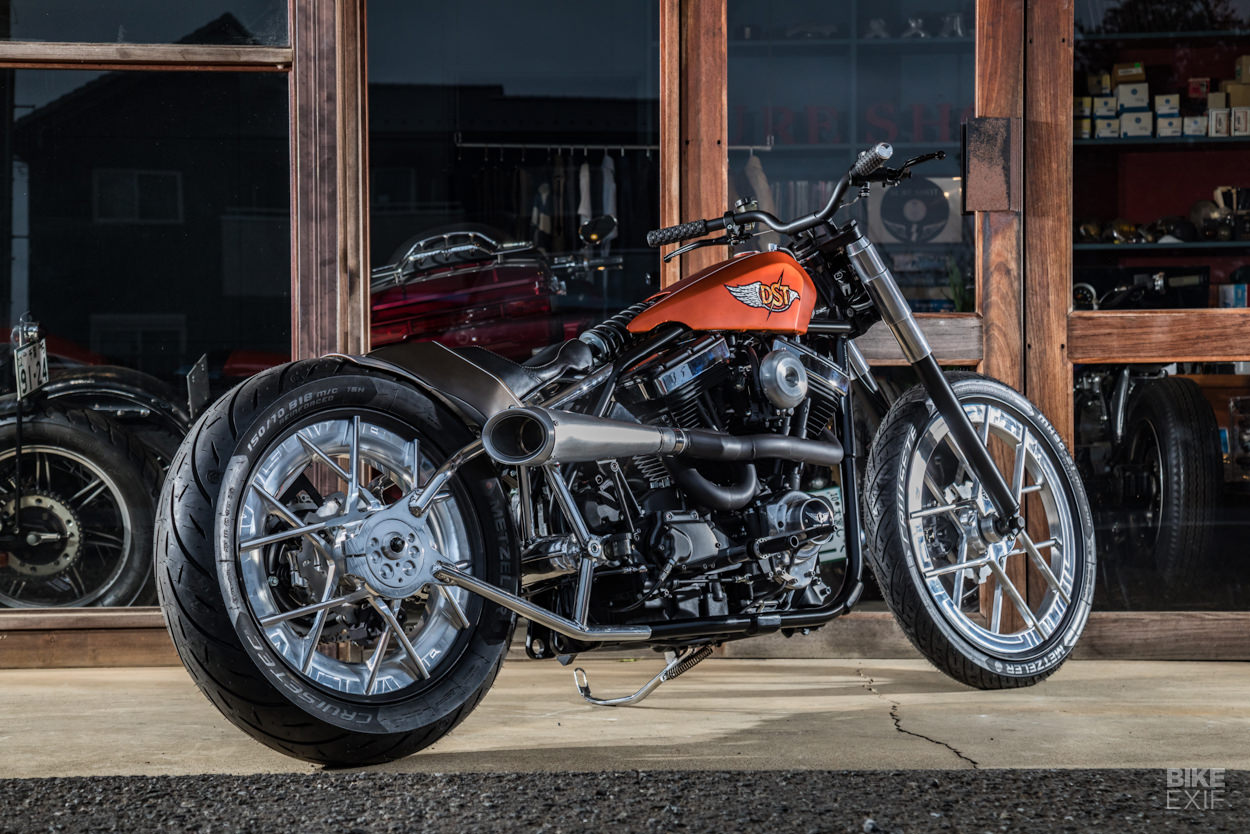 The factory Low Rider frame is thick, with a square main tube. It didn’t fit Aikawa’s concept, so he fabricated a new main tube. Other parts, such as the down tubes, are modified factory components.

Harley’s own Softail frames are pretty rugged, and not suitable for making skinny choppers. So Aikawa decided to use a cantilever aluminum swingarm, which is a very heavily modified Ducati S4R unit. 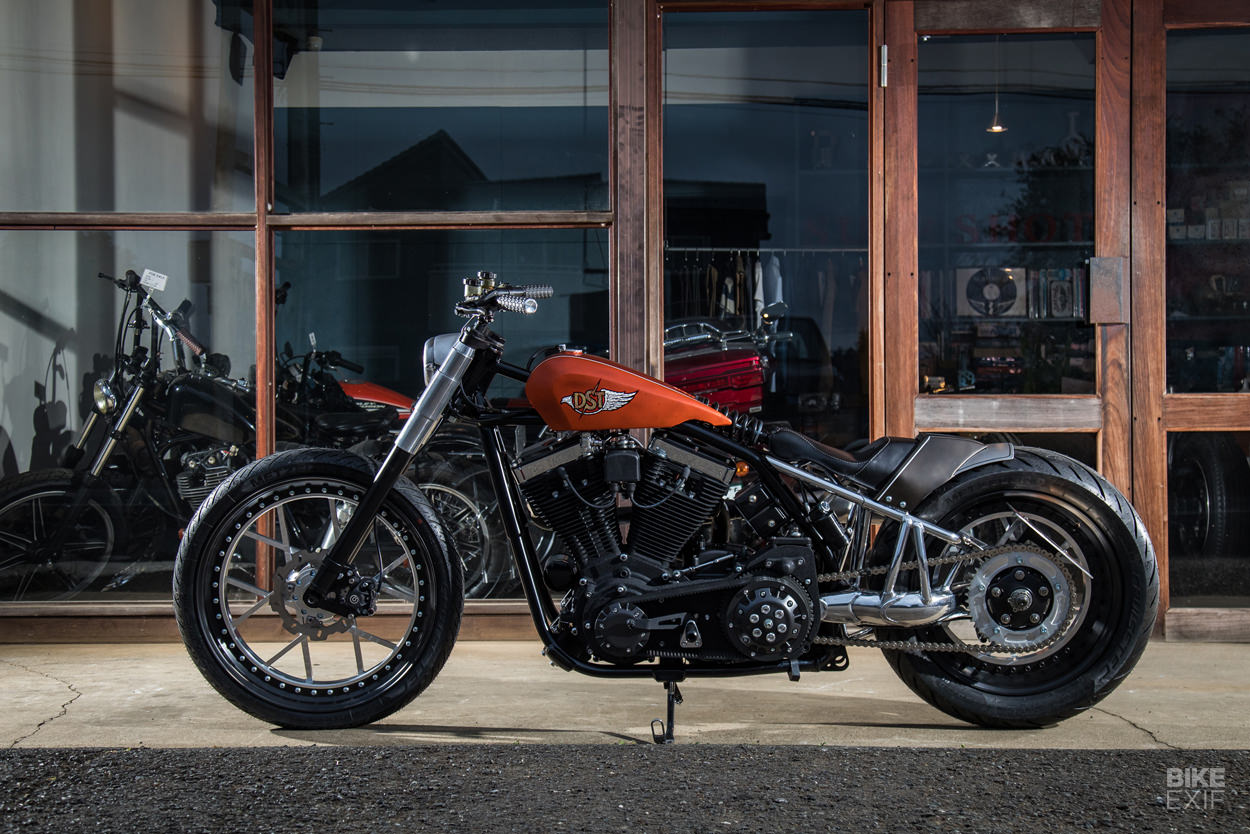 “It’s slender and beautiful, with a very organic design,” says Aikawa. “The structure, with the drive chain going outside the swing arm, feels ‘fresh’.”

A detachable swingarm, more akin to a subframe is on the opposite side, making it easy to change tires. And to emphasize the skinny frame, the underside of the seat unit has been made narrower than the frame itself. 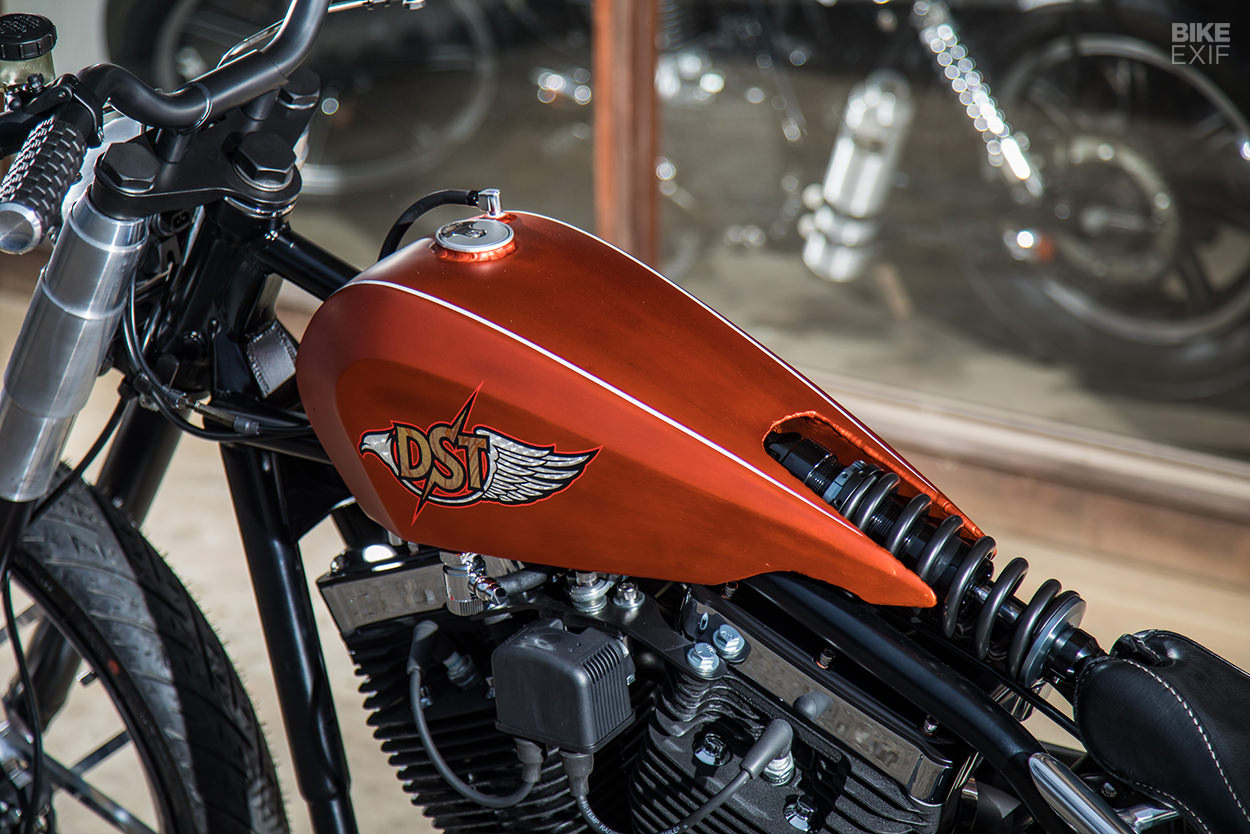 Local specialist Studio Wokini upholstered the seat, and right ahead is the very visible monoshock. Originally designed for current Milwaukee-Eight softails, this shock was made by Racing Bros in Taiwan. It’s a most unusual placement (and piece of engineering), and probably tipped the Mooneyes judges into giving the bike the top award. 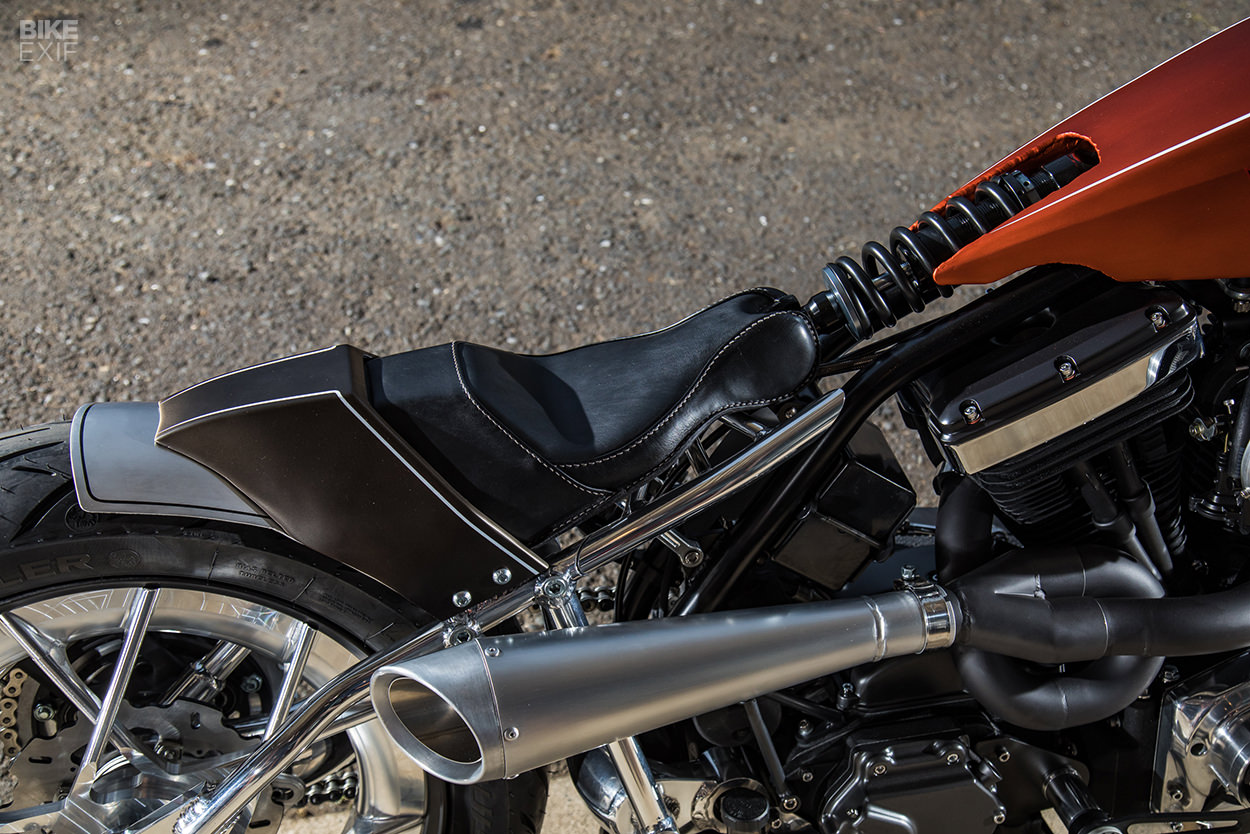 Like the tail section, the tank was hand-made from aluminum—without any filler to smooth it off—with the heads of the Big Twin engine cutting into the base line a fraction. The candy orange paint was applied by Rod Design, with Rio Studio adding the logo and pinstriping. It’s a nod to Harley’s traditional racing colors.

The blacked-out 96ci engine is now running new pistons, 510-spec high-torque cams and a 4-5/8″ Stroke Flywheel from S&S Cycle. It’s visually cleaned up a little too, with fussy parts like the carburetor stay and breather hose either eliminated or concealed. 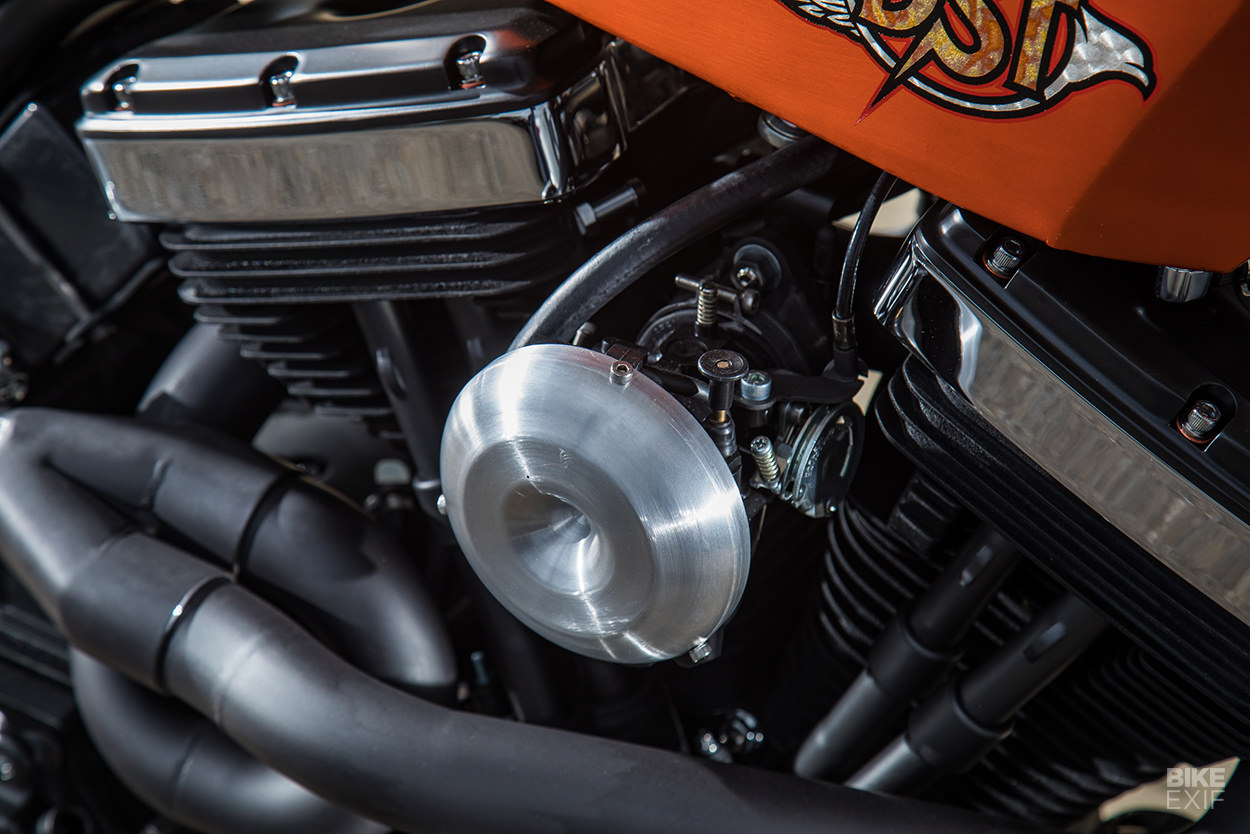 The engine breathes through a Screamin’ Eagle Keihin carb, and the high-set exhaust system was fabricated by Aikawa-san himself. A Dyna 2000i programmable ignition system keeps everything running smoothly, and power hits the back wheel via a hydraulic clutch and an Ultima open primary belt drive.

The wheels are much less familiar. The front is 21 inches, and the rear 18, the golden ratio size favored by Aikawa when making skinny choppers. 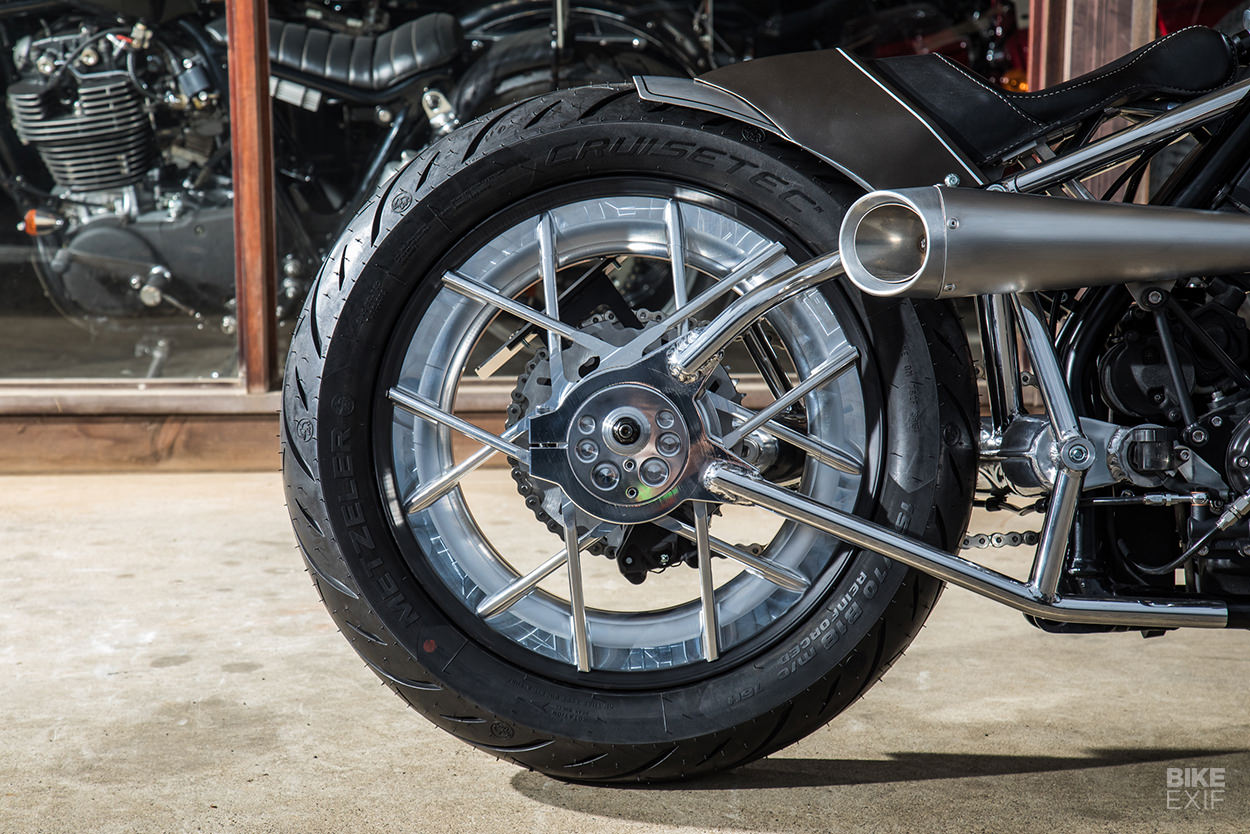 Both wheels are entirely original designs, machined up from five pieces at the front and four in the rear. The spokes are offset to one side and the brake calipers and hubs are contained within the width of the rims, in keeping with the slimline vibe.

At the front, the brake caliper is from Brembo, but the rotor is from the Italian company Braking—originally designed as an aftermarket part for Honda CBRs. 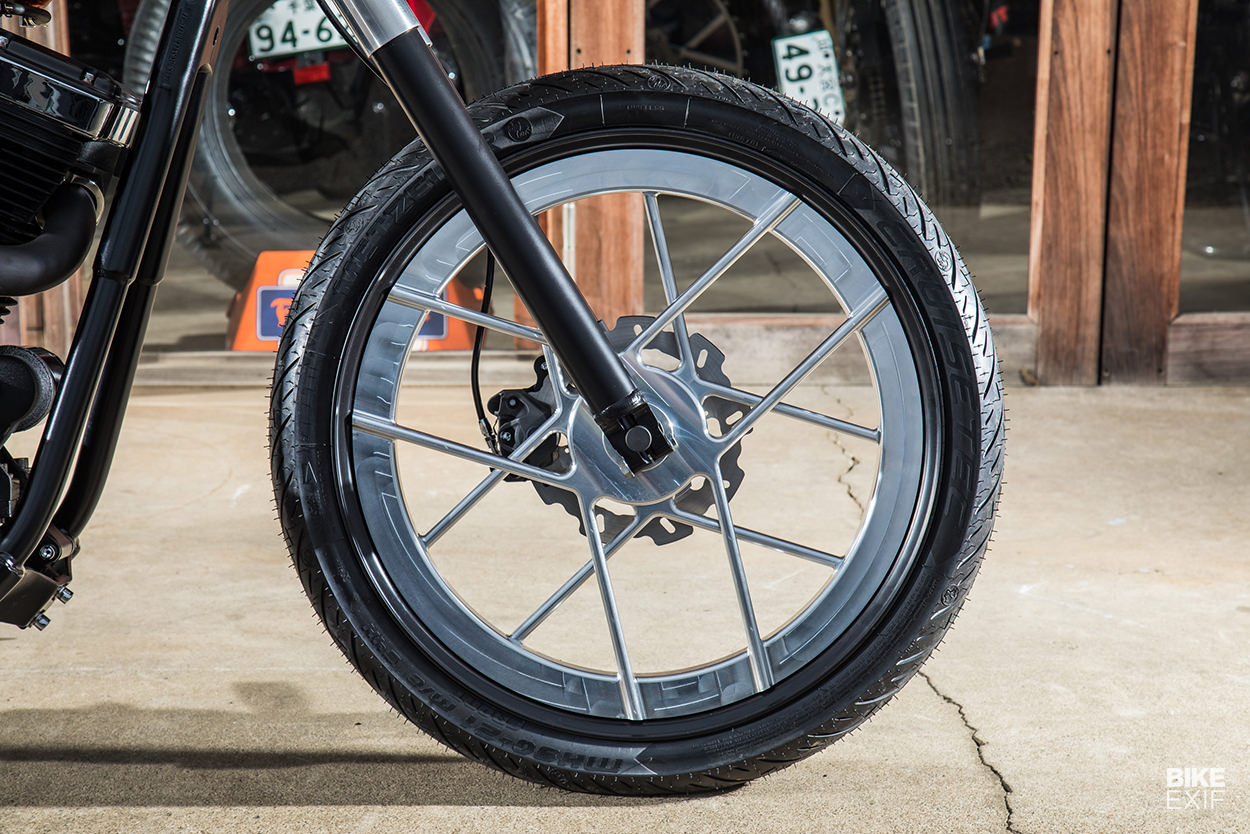 The forks have been narrowed with the help of new triple trees, and re-sleeved in aluminum for a minimalist look. Custom bars are integrated with the risers, and set deep between the fork tubes is a vintage fog lamp from a car—with a discreet nacelle above. 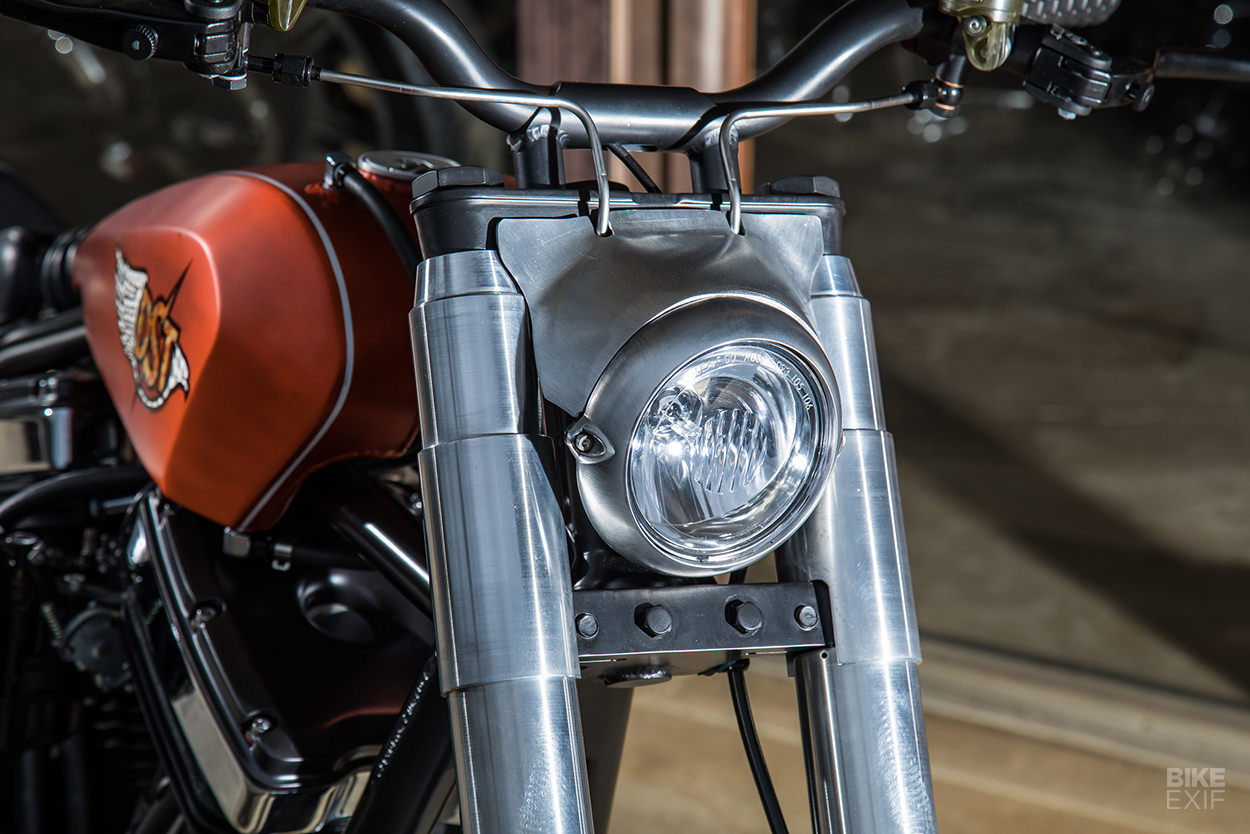 Aikawa only finished the Low Rider on the load-in day of the Mooneyes show. So he must have been relieved when media crews and other builders cheered as the bike rolled into the venue.

Did he have an inkling he might take home ‘Best of Show’? Who knows. But this beautifully engineered Dyna is a more than worthy winner. 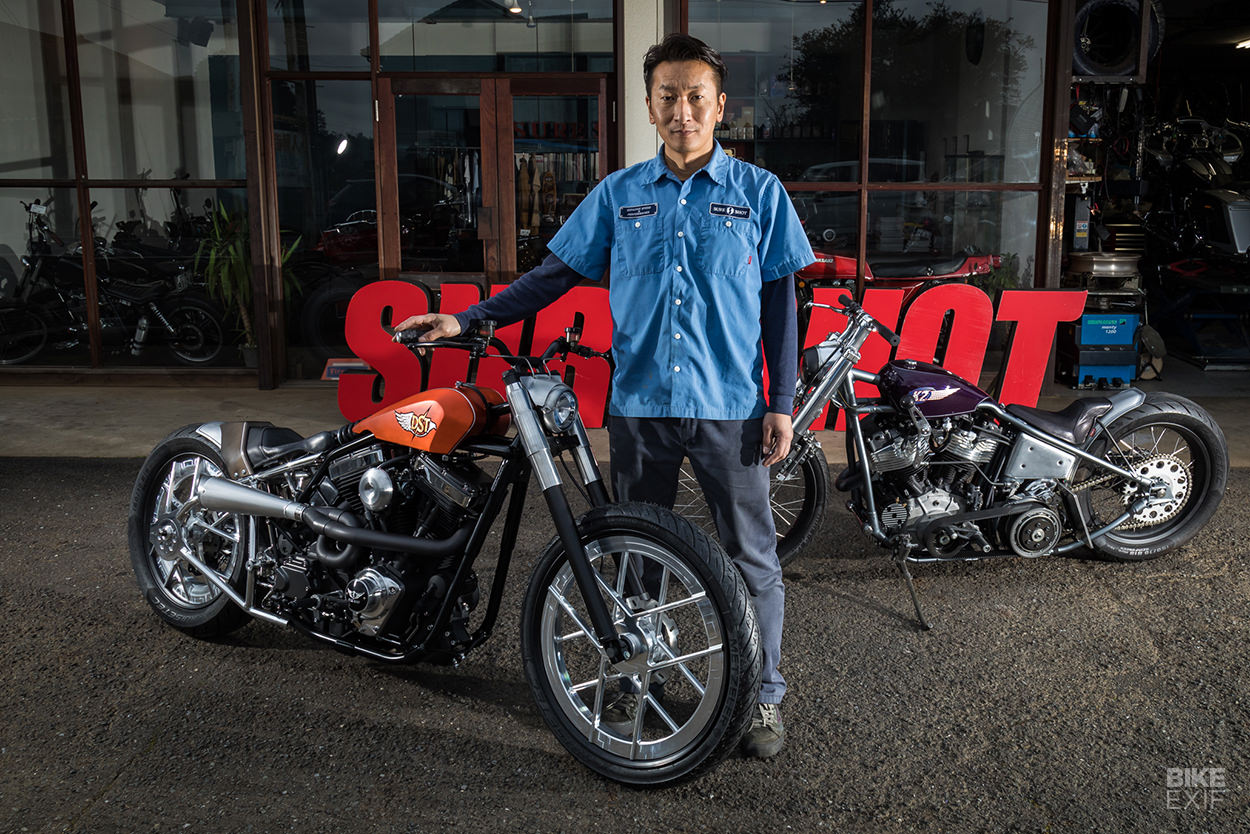